Myths about pregnancy are as old as time and difficult to ignore. Despite the research that dispels them, these myths have deep cultural roots, passing from one generation of pregnant women to the next. But like most myths, the ideas didn't come out of nowhere, and some are actually based on a bit of scientific truth. See which of these reveals surprises you the most.

If it's a Girl, the Mother Will Carry the Baby Higher

False. How high the baby sits in the mother's stomach has to do with stomach muscles and does not indicate the sex of the baby. Women with strong abdominal muscles tend to carry their baby higher, especially during a first pregnancy. Uterine tone, the amount of weight the mother gains, and the baby’s position in the womb also play a role. 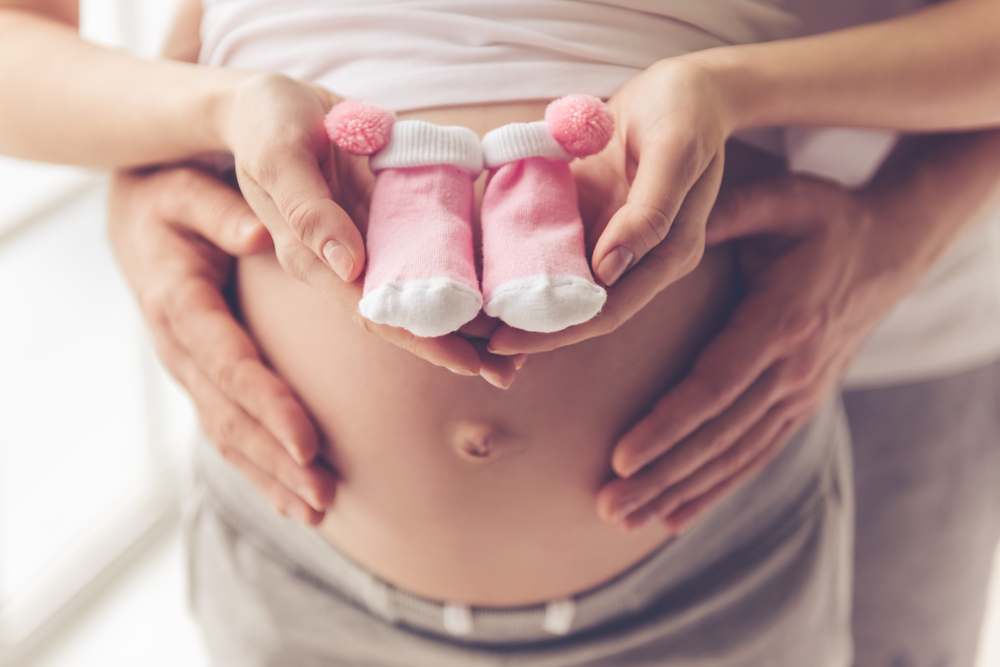 If the Mother Has Severe Morning Sickness, She Is Likely Carrying a Girl 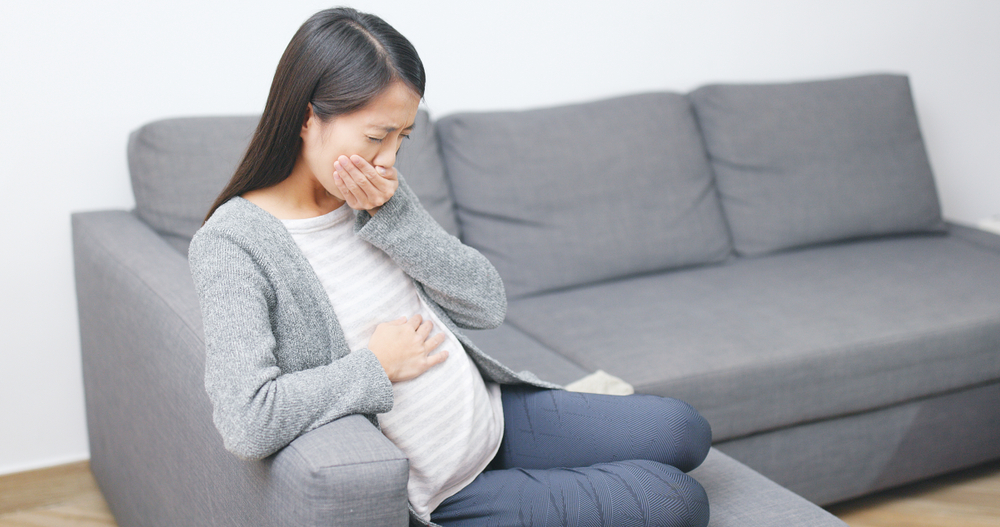 Stress Is Bad for the Unborn Child

Mostly true. Usual day-to-day stresses are not harmful to an unborn child. But studies show stressful, long-lasting or catastrophic events, such as a death or the loss of a job, increase the risk of a child having emotional, behavioral, or cognitive problems later in life. Research also indicates that women with post-traumatic stress disorder (PTSD) or those who experienced high levels of stress during pregnancy have a higher risk of preterm labor and low birth weights. 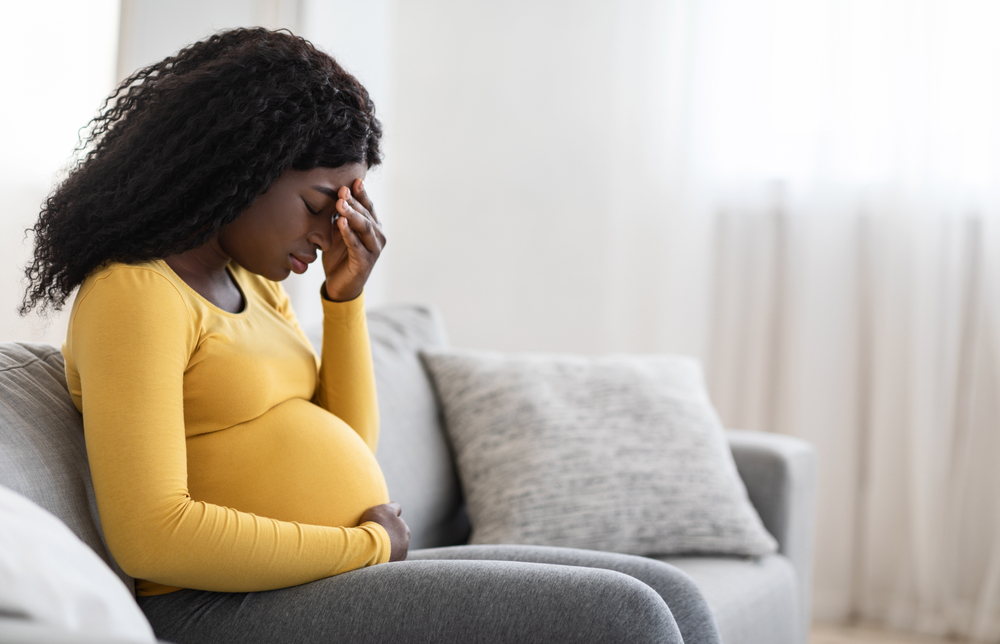 Somewhat true. Research shows that high-fructose foods impair placental function in mice. However, a 2016 studyfound that eating flavonoid-rich dark chocolate during pregnancy improved blood flow to the uterine arteries in women who consumed it in the first and second trimesters.

Flavonoids are not sugars but compounds from cacao, and therefore found in chocolate desserts. They are part of the polyphenol family and excellent sources of antioxidants. Consumed in moderation, dark chocolate can make a great snack during pregnancy because is low in sugar and high in polyphenols. However, expectant mothers should reduce or remove high-sugar desserts like cookies and cakes from their diets. 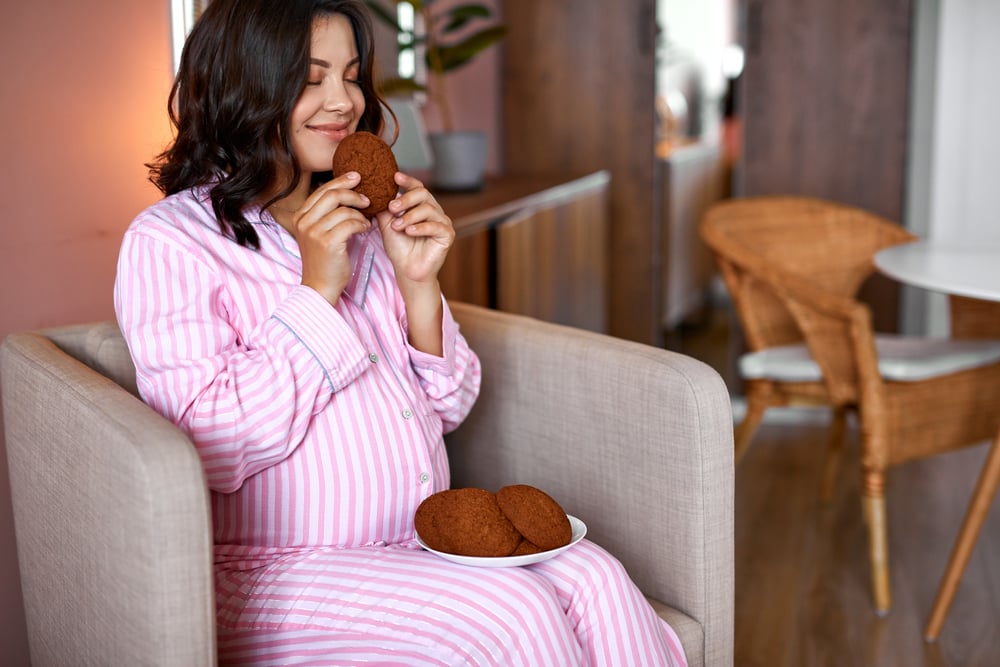 Exercise Is Dangerous for Pregnant Women

False. Moderate exercise during pregnancy in 30-minute sessions, five days a week improves metabolic functionand lowers the risk of developing heart disease and diabetes. Pregnant women should avoid any exercises that could lead to a loss of balance or a fall and only perform them at a moderate level.

Some doctors may tell pregnant women they can continue to work out at the level they did before they became pregnant, but always check with a doctor, first. 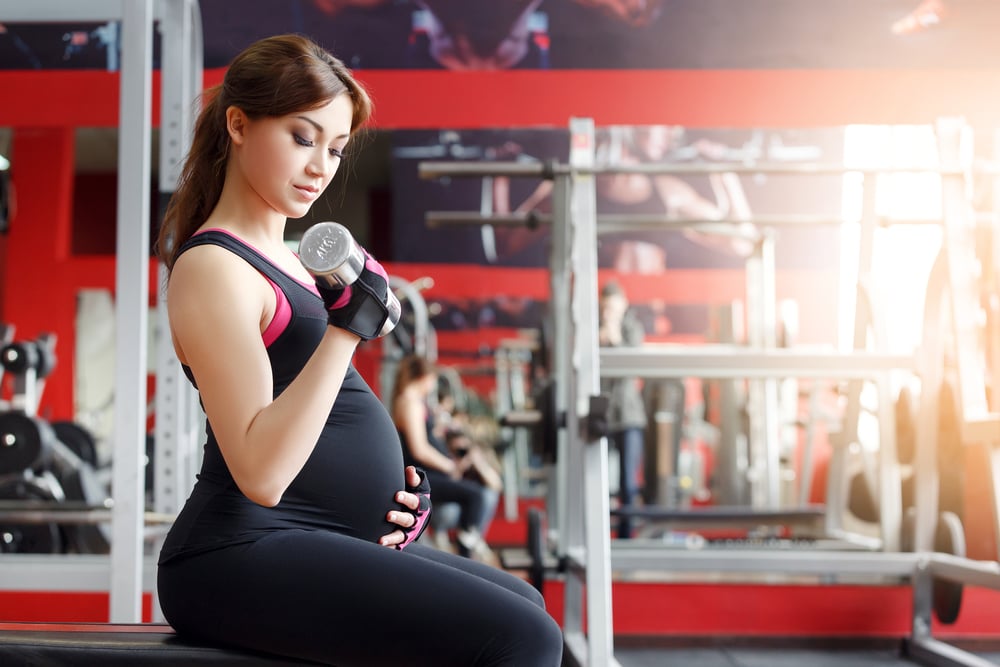 Seafood Can Harm an Unborn Child

Mostly false.Fish and shellfish contain healthy amounts of zinc, protein, and iron, along with omega-3 fatty acids, which promote brain development in the unborn baby.

Some types of predatory fish, such as sharks, swordfish, and king mackerel, have large amounts of mercury. This chemical can accumulate in the pregnant woman's bloodstream and hinder fetal brain and nervous system development. During pregnancy, women should also avoid eating uncooked fish and shellfish due to harmful bacteria or viruses. 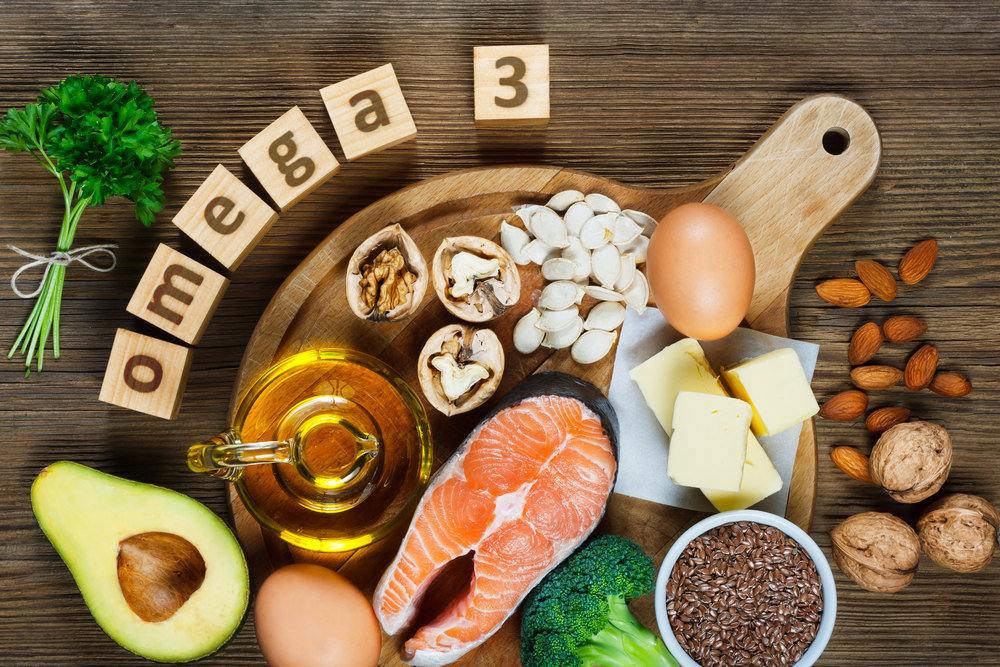 The Womb Completely Protects the Fetus

True, for the most part.The womb, or uterus, is an organ that works with the umbilical cord, placenta, and an array of bones and muscles to protect the unborn baby. But these protections do not make the fetus invulnerable to environmental hazards, smoking, alcohol, specific foods, X-rays, or high-impact accidents. Studies show that even moderate daily caffeine intake can lead to smaller birth size. 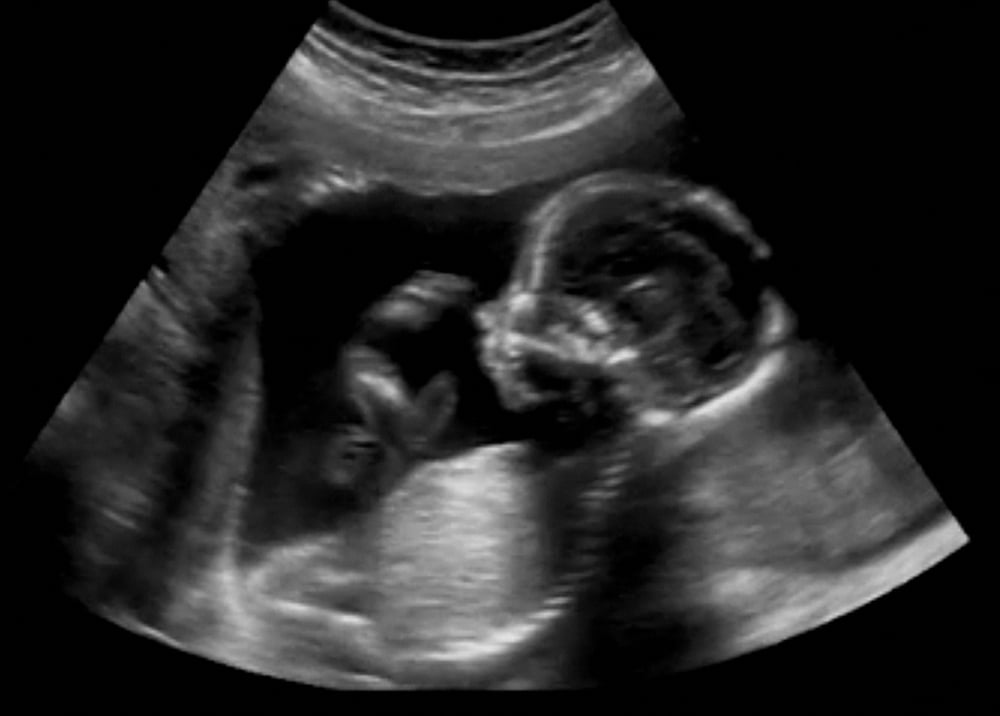 An Unborn Child Connects With the Mother Physically and Psychologically

True.A pregnant mother supplies warmth and sustenance for her unborn child. The placenta nourishes and performs the exchange of fetal gases and wastes, while cells work their way through the placenta performing tissue repair and cancer prevention. A mother also soothes the fetus through the constant beating rhythm of her heart. Studies also show that as the unborn child grows, it receives messages from the mother. A fetus is sensitive to any changes in the mother’s emotional condition, such as the development of depression, which can lead to psychiatric or neurological issues in the child. 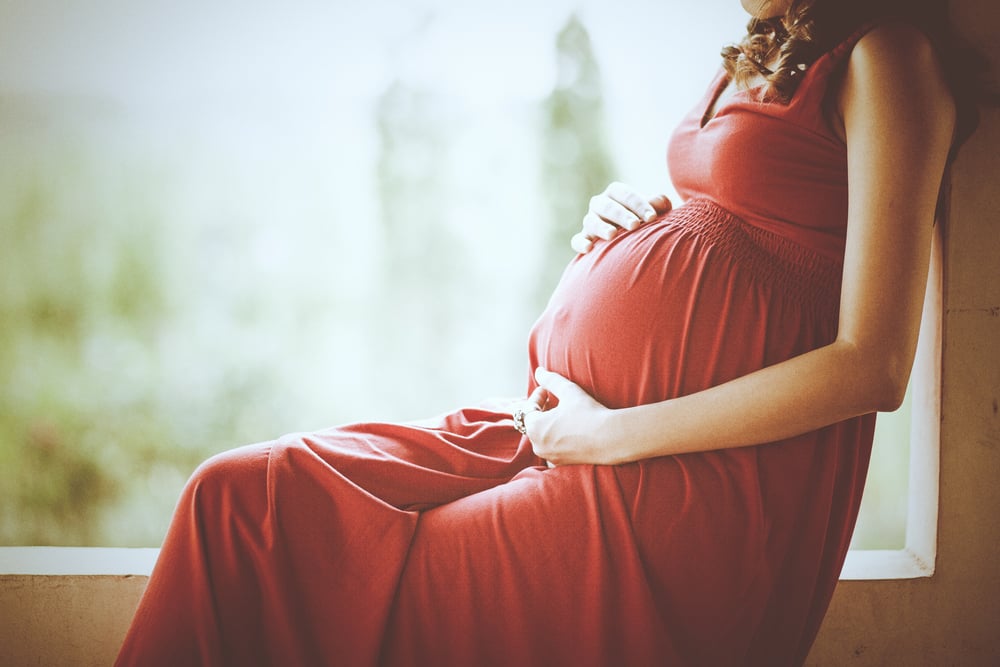 True.A 2012 study in England found that seasonal factors can lead to changes in embryonic or fetal tissue. Researchers said this can influence susceptibility to psychiatric disease, including schizophrenia, later in life. Another study concluded that a person’s birth month helps determine their personality. Children born in spring are generally more positive, while summer babies have frequent mood swings. Those with autumn birthdays were less likely to become depressed, and children born in winter were less prone to irritability. 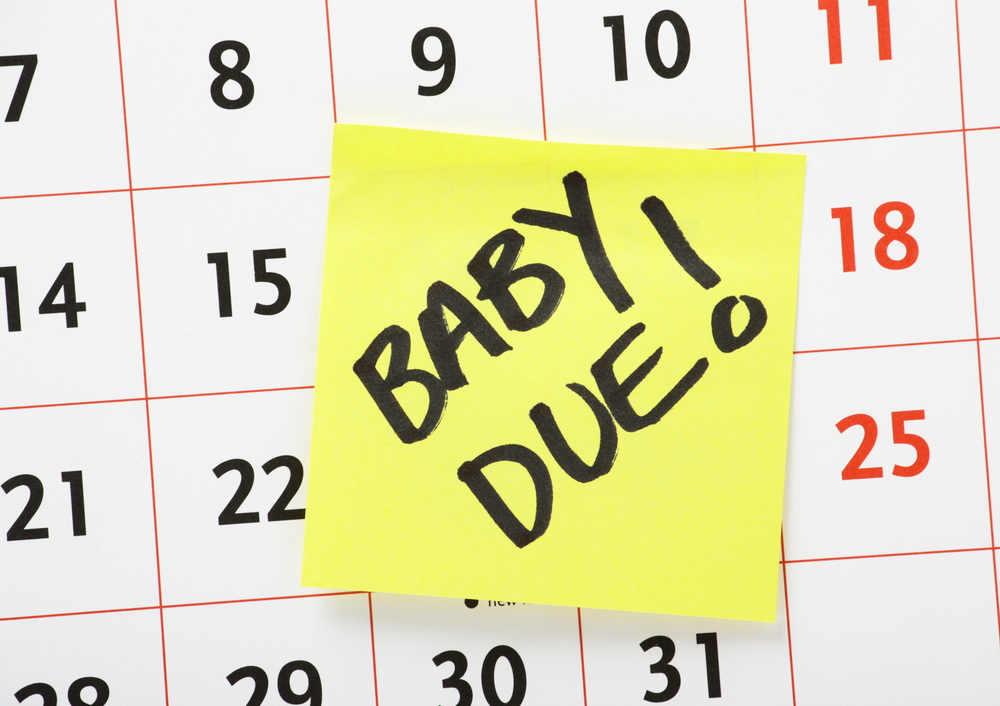 Women Should Strive For the Perfect Pregnancy

False.The very existence of a perfect pregnancy is a myth. Every pregnancy is unique and develops according to the physical and mental health of the mother, genetics, and a variety of other factors. Reducing the risk of complications by following a healthy diet, participating in regular exercise, controlling blood pressure and blood sugar levels, and avoiding exposure to harmful substances leads to a safer, healthier pregnancy, but not a perfect one.Regular prenatal care can help prevent issues, but striving for a "perfect" pregnancy can place excessive stress on the expectant mother, which, as discussed previously, can be detrimental to the baby. 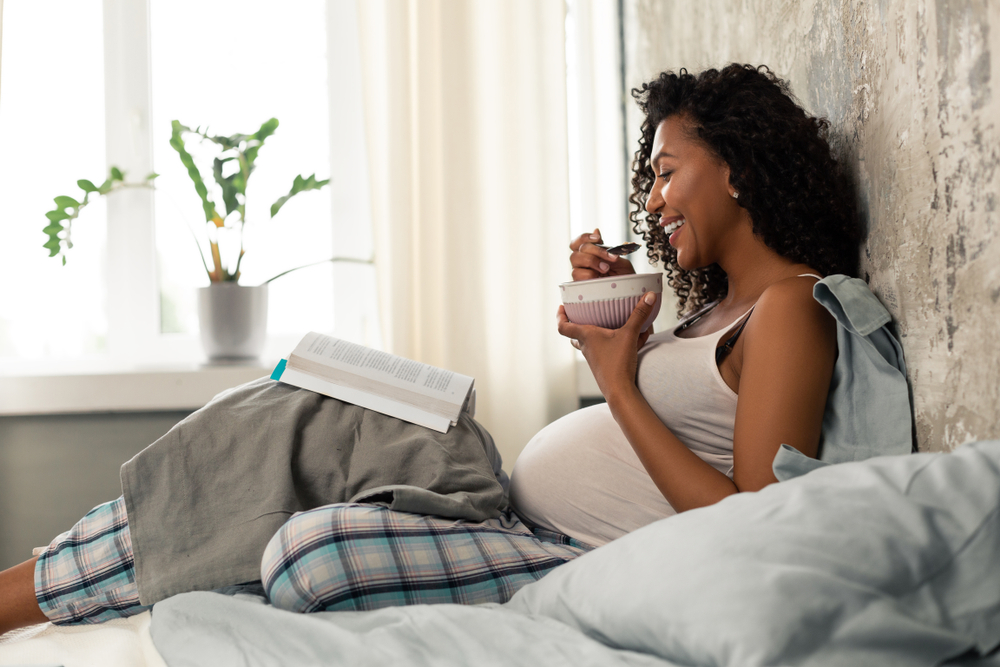