There are three primary types of skin cancer. Each is named after the cells where it originates, either squamous cells, basal cells, or melanocytes. While some risk factors for these cancers are similar, each type acts a little differently. They vary in how quickly they grow, whether or not they spread to other areas of the body, and their most effective treatments. Knowing the symptoms of each type of skin cancer is important to make sure diagnosis and treatment happen as soon as possible.

Skin cancer is classified based on the type of cell in which it started. There are three types of cells in the epidermis or top layer of the skin. Squamous cells are flat and are constantly being shed and replaced. Basal cells are in the bottom layer of the epidermis and divide, forming new cells to replace the squamous cells as they are shed. Basal cells move up through the epidermis, getting thinner as they move toward to surface and eventually become squamous cells. Finally, melanocytes are the cells that give skin its color. Melanocytes protect the deeper layers of skin from sun damage by darkening when exposed to the sun. 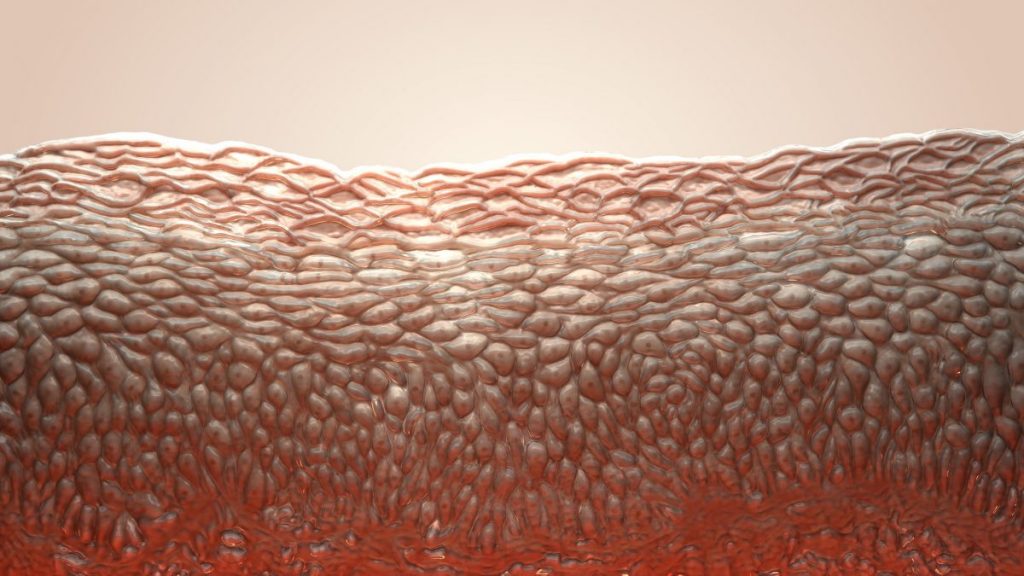 Basal cell carcinoma is the most common form of skin cancer, making up eight out of ten cases. This cancer grows very slowly and is not likely to spread throughout the body. However, someone who has had a basal cell carcinoma is likely to develop a subsequent recurrence. The cancer sometimes grows and spreads into the bone, muscle, and other layers of the skin if left untreated. Unless it is removed completely, it can reoccur in the same place. 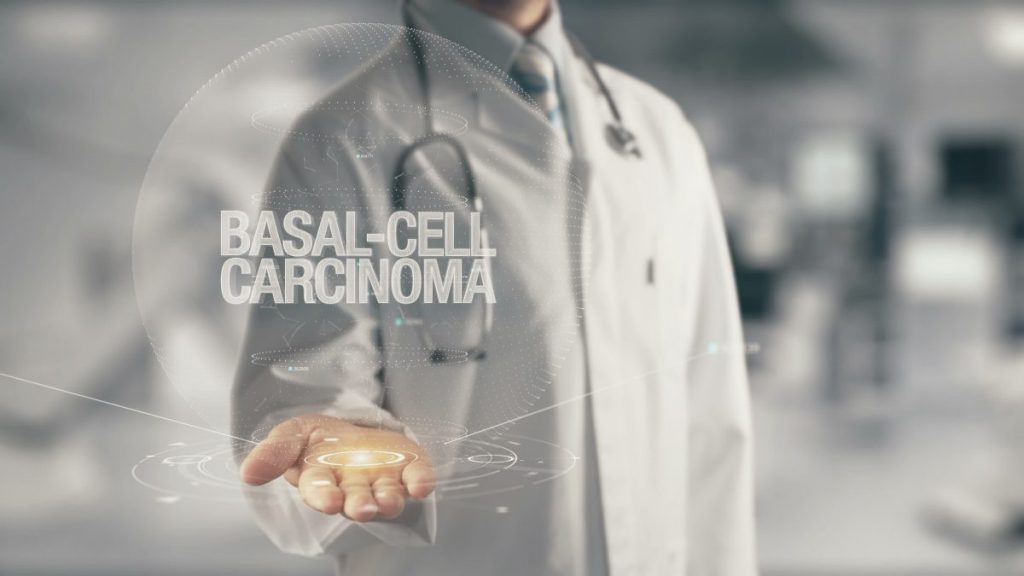 Basal cell carcinomas appear as flesh-colored bumps with a pearlesque finish or a pink patch of skin. They are most likely to occur in fair-skinned people with a history of frequent sun exposure or indoor tanning, though they can happen on darker skin as well. These cancers are more common in areas that receive frequent sun exposure like the head, arms, and neck but can appear anywhere on the body. 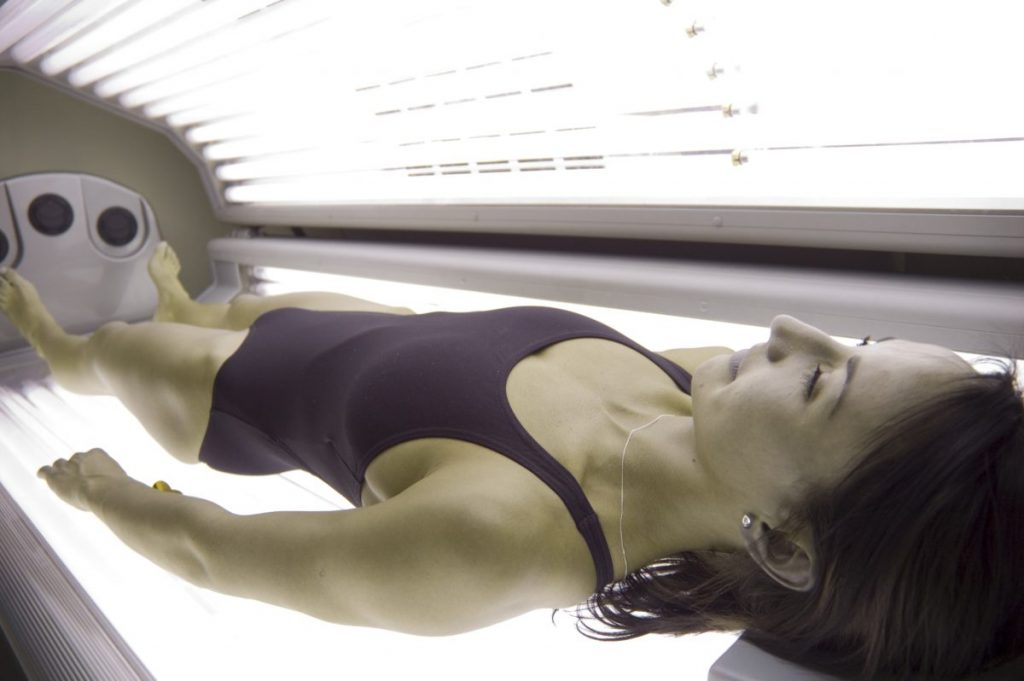 The second most common type of skin cancer is squamous cell carcinoma, which affects about a fifth of people with skin cancer. These cancers begin in the top layers of the skin. They are more likely to spread to other parts of the body than basal cell carcinomas, but this is still relatively uncommon. 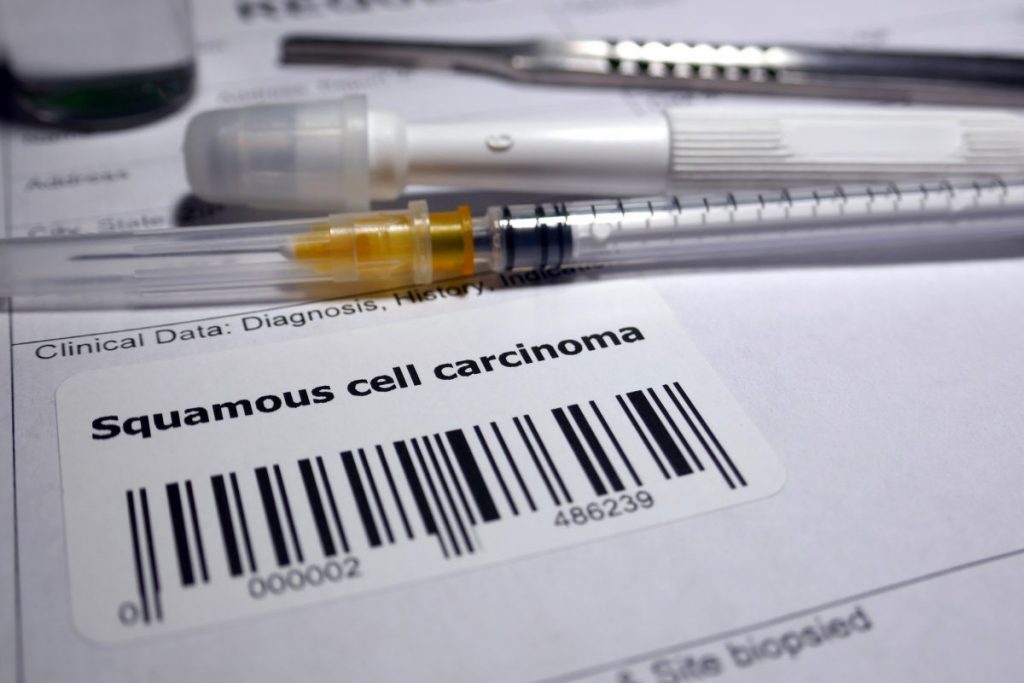 Keratoacanthomas are considered to be benign, self-limited skin tumors. However, they look very similar to malignant cancers to the naked eye and even under the microscope, so it is difficult to differentiate them. These dome-shaped tumors show up on sun-exposed skin. They start out growing quickly, then slow down significantly. Some shrink and go away on their own without treatment, but some continue to grow and spread. Because they look similar to cancer tumors, most doctors treat them as squamous cell cancer. 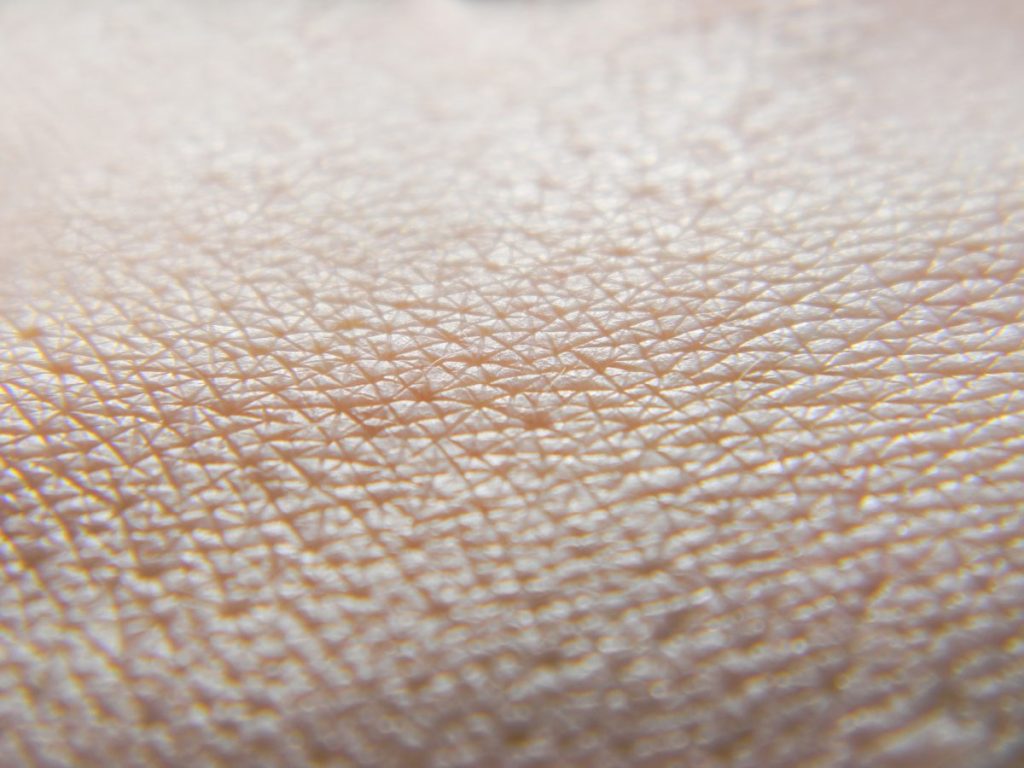 People with fair skin are more likely to develop squamous cell carcinoma, but they can affect people of any skin color. Besides exposure to UV rays, other risk factors for this form of cancer include human papilloma virus (HPV) infection, radiation therapy, exposure to chemicals, smoking, and older age. This type of skin cancer often presents as a firm red bump or scaly patch but can also appear as a sore that does not heal. Areas of the body that get a lot of sun exposure are more likely to form squamous cell cancer, such as the ears, face, chest, and back. Because this type of cancer can grow deep into the skin, early diagnosis and treatment are essential to stop it from spreading to other areas. 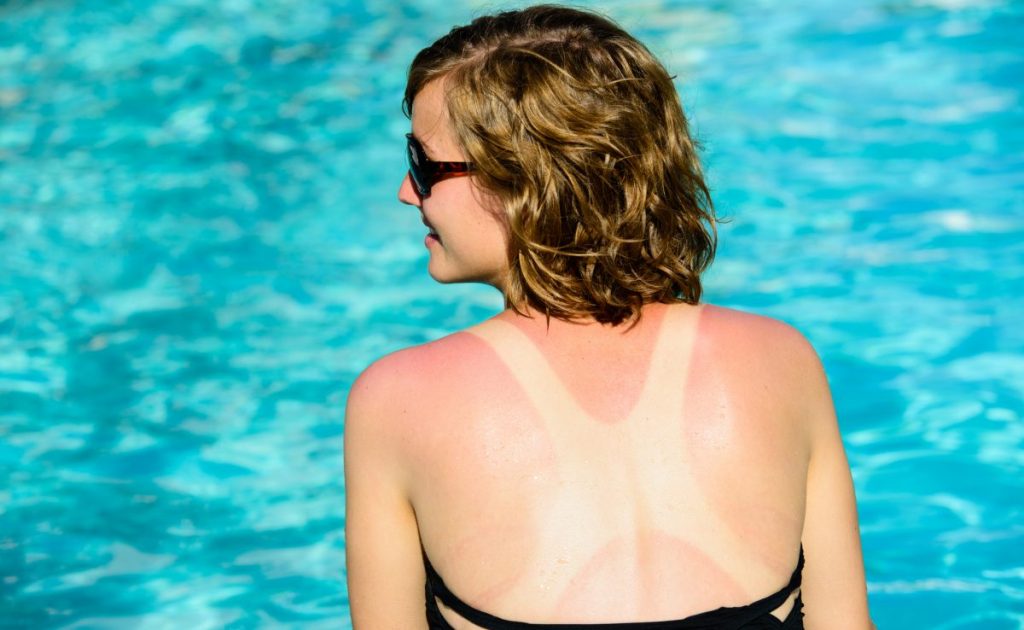 Melanoma is much less common than other types of skin cancer. This cancer starts in the melanocytes that give skin its pigment. While it is rarer, melanoma it is also more likely to spread and can be deadly if not caught early. Once detected, melanoma is staged based on thickness, whether the skin over the cancer is ulcerated, and whether it has spread to lymph nodes or other parts of the body. 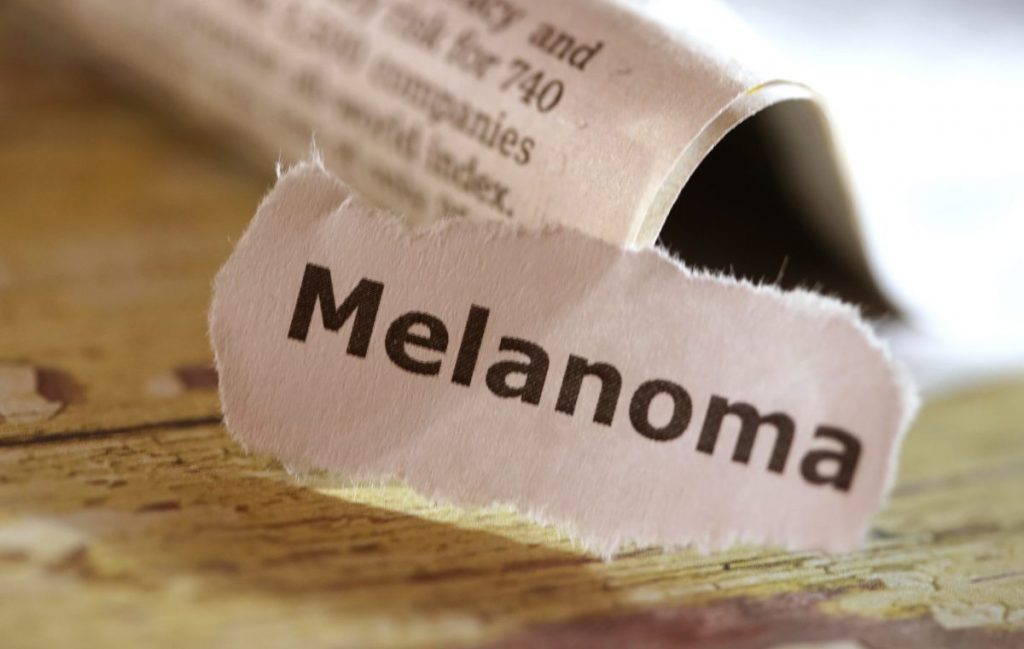 Because melanoma cells make melanin, the tumors are usually dark in color, though they can also be pink, tan, or white, which are not as noticeable. Melanomas can appear anywhere on the skin but are likely to start on the legs in women and the chest or back in men. People with darkly pigmented skin have a lower risk of melanoma, though it is still possible on the soles of the feet, palms of the hands, and under the fingernails. Besides UV exposure, other risk factors for melanoma include having many moles, older age, family history of melanoma, and a weak immune system. Skin exposed to the sun is not the only place melanoma can develop. Look out for suspicious moles that change in color or size or that start bleeding. Moles with irregular borders, different colors, or are painful or itch should be checked as well. 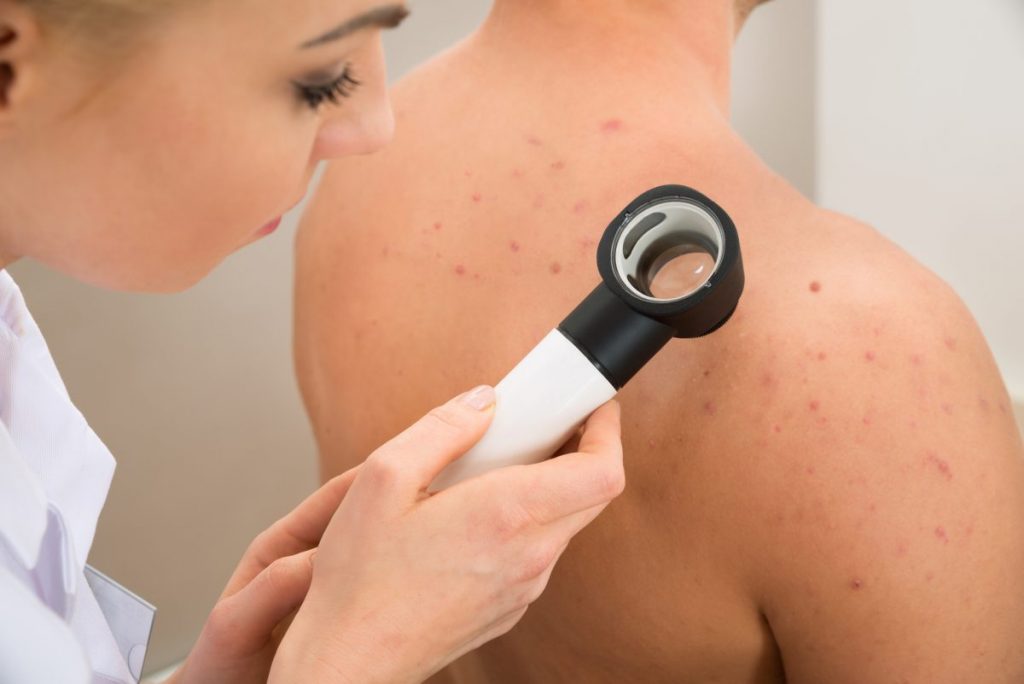 Although actinic keratosis is not a type of skin cancer, it can be a precursor. The rough, scaly patch of skin develops from years of sun exposure and is usually found in areas that see the most sun, like the scalp, neck, forearms, lips, ears, and face. Actinic keratosis grows slowly and does not usually have any other signs or symptoms, but a small percentage of them do become a squamous cell carcinoma over time. 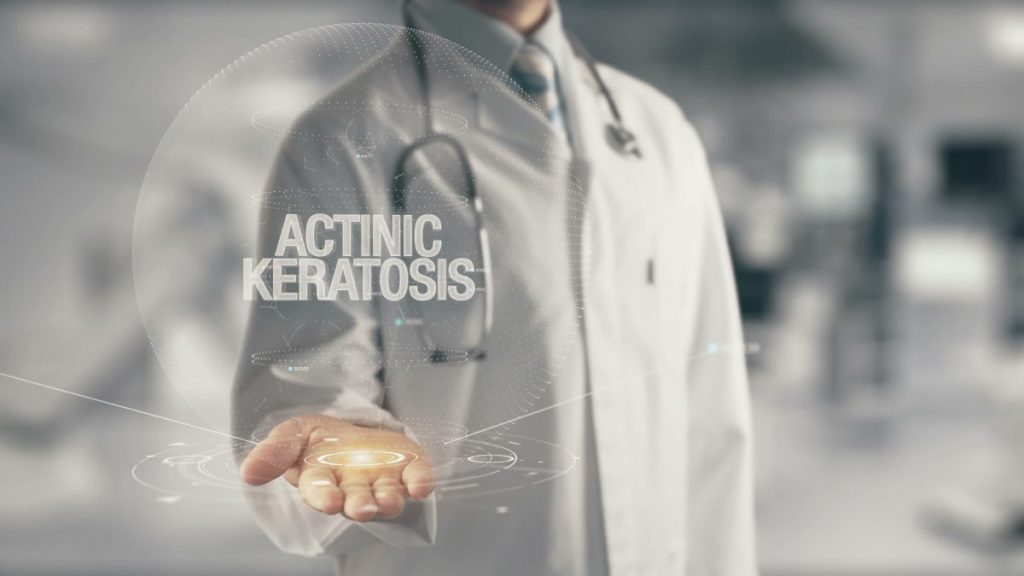 Actinic keratosis takes years to develop and usually appears after age 40. It presents as a small, rough, scaly patch of skin less than one inch in diameter. They can be brown, red, or pink and can itch or burn occasionally. To reduce the risk of developing actinic keratosis and perhaps a squamous cell carcinoma, limit exposure to UV light. 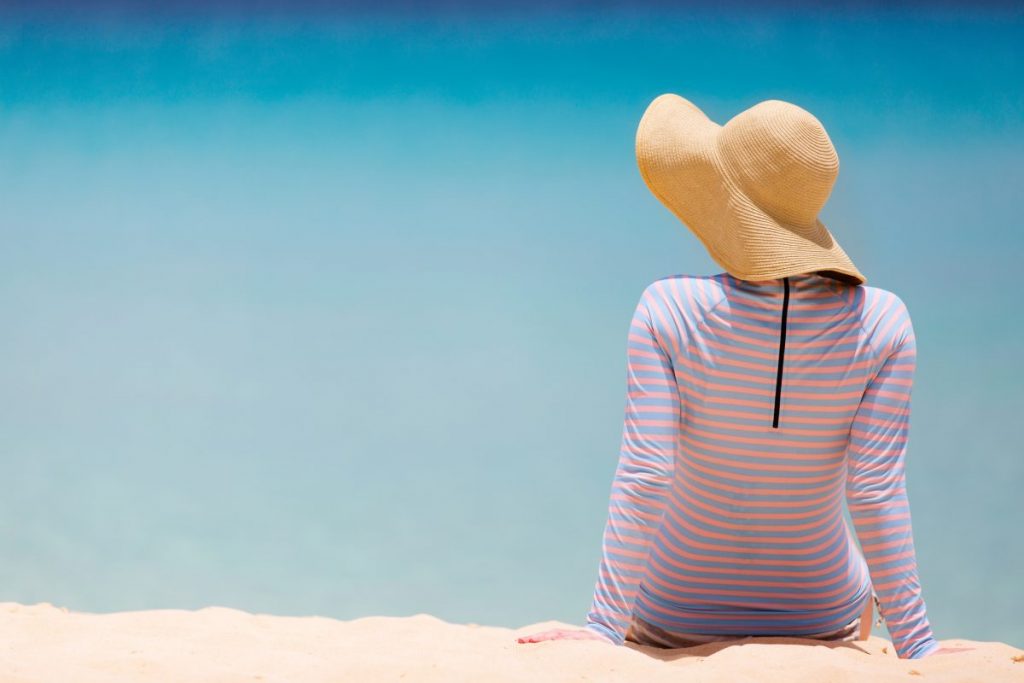