What are the Tallest Buildings in the World?

The title of World’s Tallest Building isn’t as easy to bestow as one might think. There are several factors to consider, and throughout the years there has been much debate about which are the most critical. The Council on Tall Buildings and Urban Habitat, a not-for-profit organization founded in 1969, is the world’s foremost authority on such decisions and has set forth several classifications. For our purposes here, we will be using their ranking of tallest buildings that have completed construction, and its height, which includes all architectural elements that add to the total design of the building.

Burj Khalifa, in Dubai, United Arab Emirates, holds the Number one spot on our list of the world’s tallest buildings. Standing 2,717 feet (828 meters), this architectural marvel is breathtaking to behold. Completed in 2010, this building is used for offices, residential space, and hotels. Engineering this giant led to the development of new construction techniques to address the high winds that would certainly affect its performance. As innovative as it is beautiful, Burj Khalifa provides a feasible model for future compact, livable urban areas. 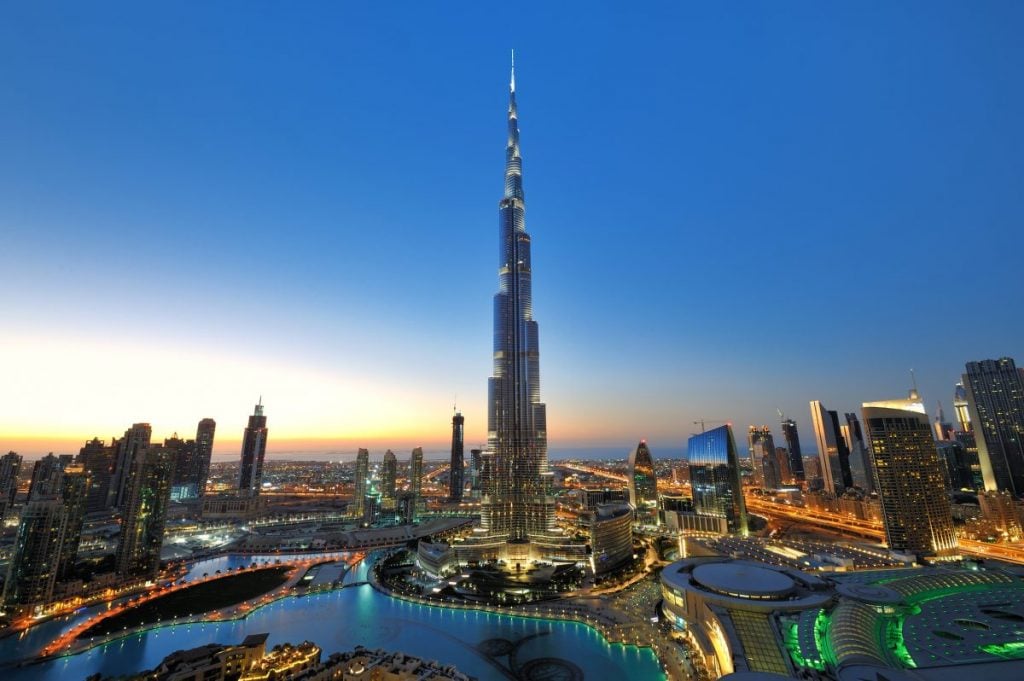 Shanghai Tower, in Shanghai, China, sits in the number two position of world’s tallest buildings. Its 2,073 feet (632 meters) are home to 128 floors of restaurant, shopping, hotel, and office space. It has been deemed one of the world’s most sustainably advanced tall buildings. Its clear second skin helps conserve energy, its use of a grey- and rain-water system helps conserve water, and its use of several renewable energy sources help reduce its global footprint tremendously. 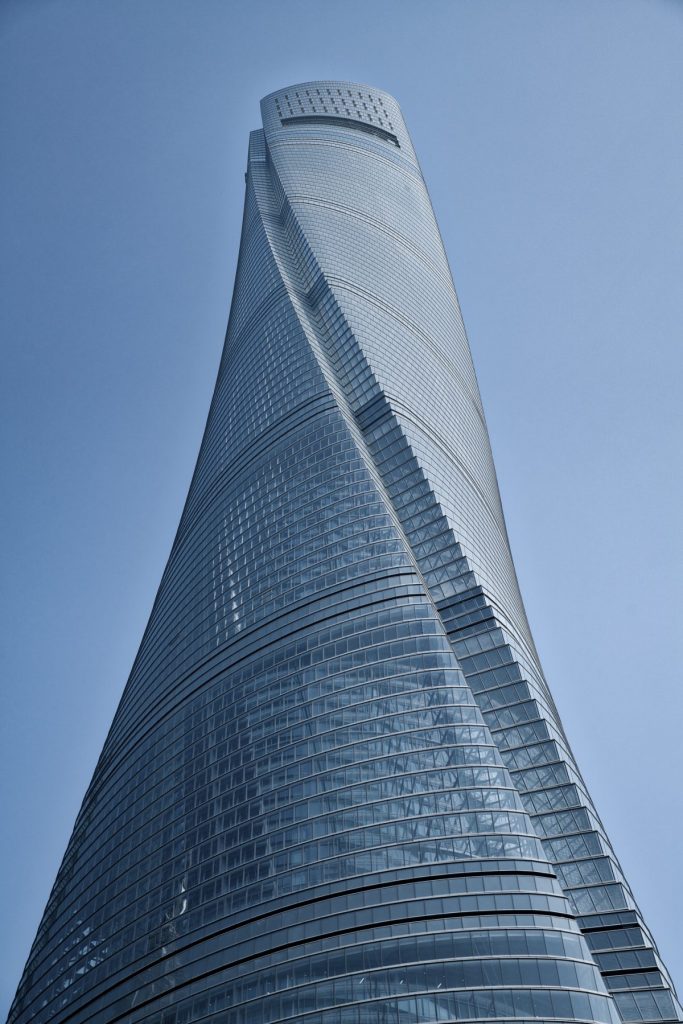 Coming in at the third position of the world’s tallest buildings is the Makkah Royal Clock Tower in Mecca, Saudi Arabia. This building provides accommodations for millions of travelers annually, who come to worship at Islam’s most sacred place. It is also home to the world’s largest and highest clock faces, hence its name. The Makkah Royal Clock Tower’s 1,972 feet (601 meters) accommodate shops, restaurants and living quarters, as well as large prayer areas, a lunar observation area, and a cosmology museum. 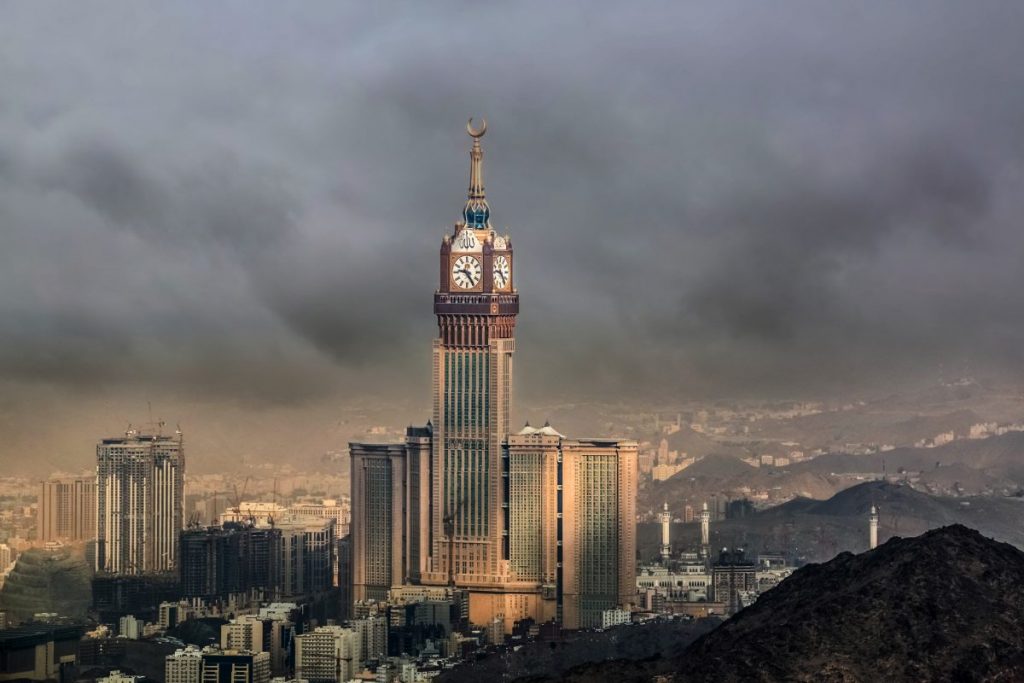 Shenzhen, China, is home to the world’s fourth-tallest building - the Ping An Finance Center. With retail, office and hotel space disbursed throughout its 1,965 feet (599 meters), the Ping An Finance Center has found an innovative and stylish way to combat the eroding effects of the salty Pacific Ocean air surrounding it. Over 1,700 tons of stainless steel adorn its facade, making it resistant to corrosion and ensuring its beauty will last for years to come. 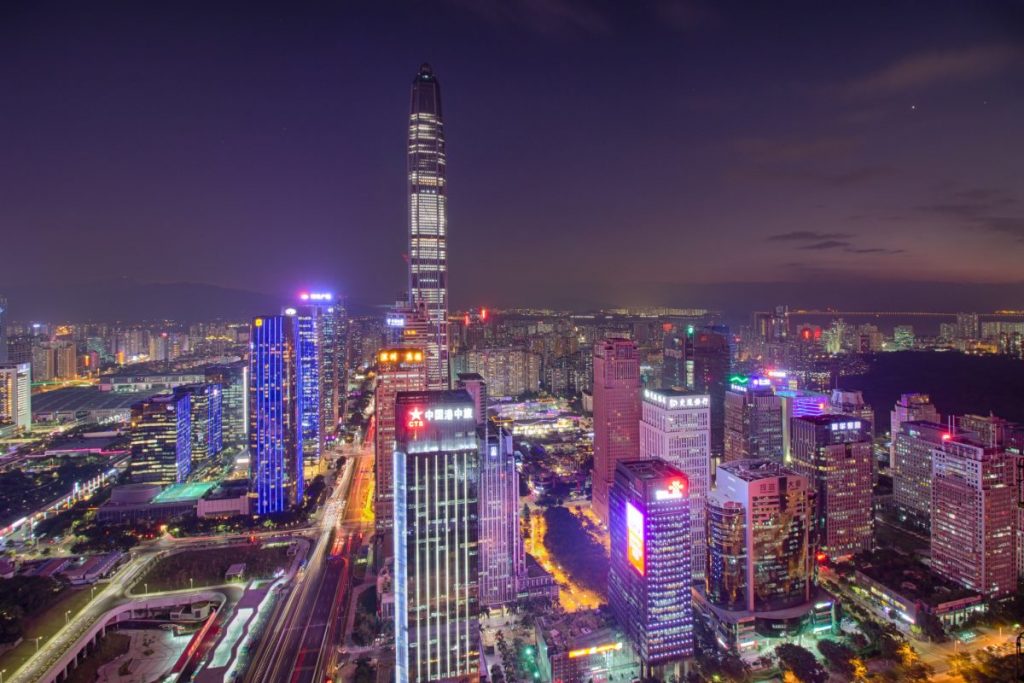 Lotte World Tower, located in Seoul, Korea, is the world’s fifth tallest building. Standing at 1,819 feet (554 meters), it accommodates 123 floors of residential, hotel, retail, and office space. It was the first 100-story building in Korea and, as such, its elegant design was of main concern for the architects, who worked to design a structure that compliments both the city it overlooks and the skyline it graces. 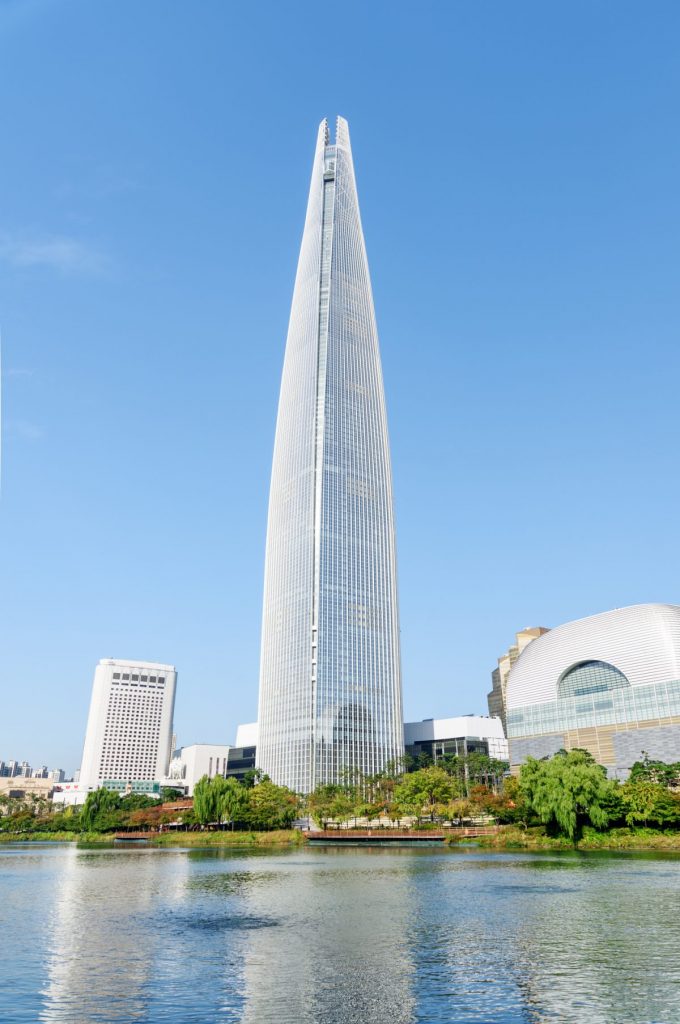 One World Trade Center is sixth on our list of the world’s tallest buildings. Located in New York City, it stands 1,776 feet (541 meters) tall and accommodates 94 floors of office and dining space. Designed to also act as a memorial to the tragic events of September 11th, its angled glass fins at the base, octagonal design at the middle and glass facade toward the top work together to create an ever-changing kaleidoscope of light on the building’s exterior. 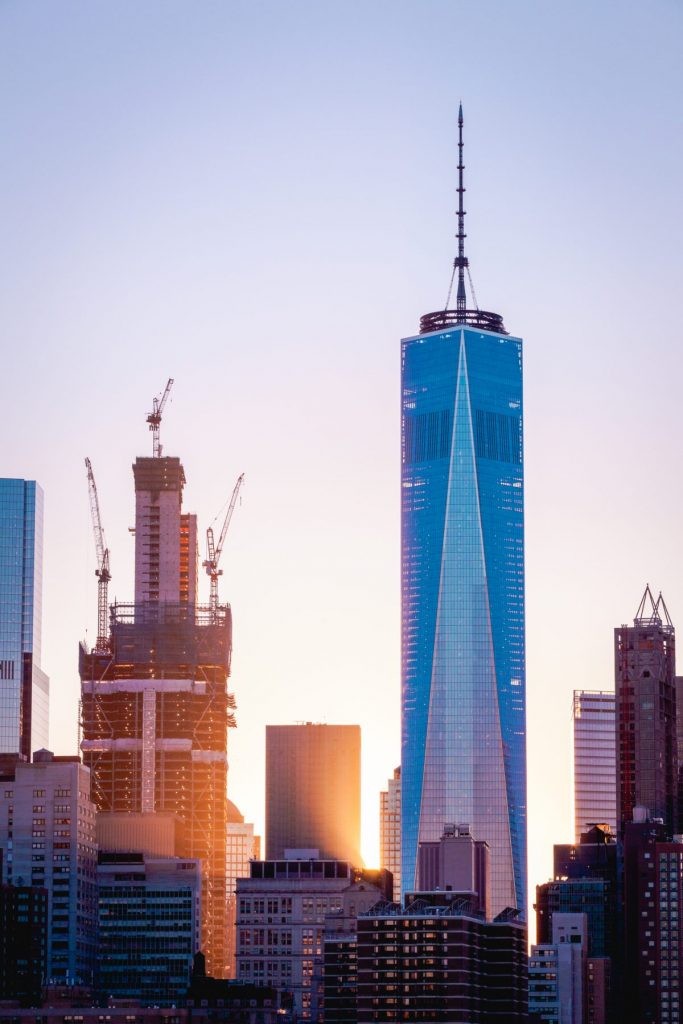 Weighing in at number seven is the Guangzhou CTF Finance Center located in Guangzhou, China. Hotels, retail, residential, and office spaces comprise its 1,739 feet (530 meters), and required architects to design its shape based on the different floor sizes required by these various uses. The result was brilliant, as they were able to achieve their goal while utilizing material that was indigenous to the Guangzhou region - glazed terracotta. They used the terracotta to build parapets (fortifying walls) at each required setback, which utilized local workers, saved on the cost of importing building materials, provided corrosion resistance, and enhanced its cultural relevance. 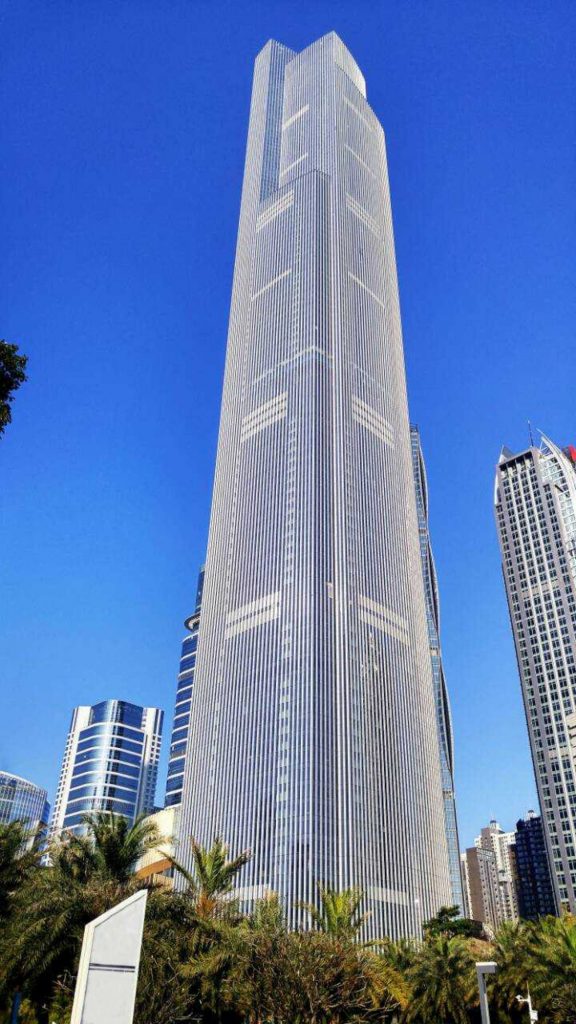 Beijing, China, is host to the eighth tallest building in the world, the CITIC Tower. Finished in 2018, its 1,731 feet (528 meters) are designed for offices, retail shops, and restaurants. The building’s unique design is based on the shape of an ancient Chinese wine vessel used in religious ceremonies, which is the reason the CITIC Tower is also called China Zun by many. 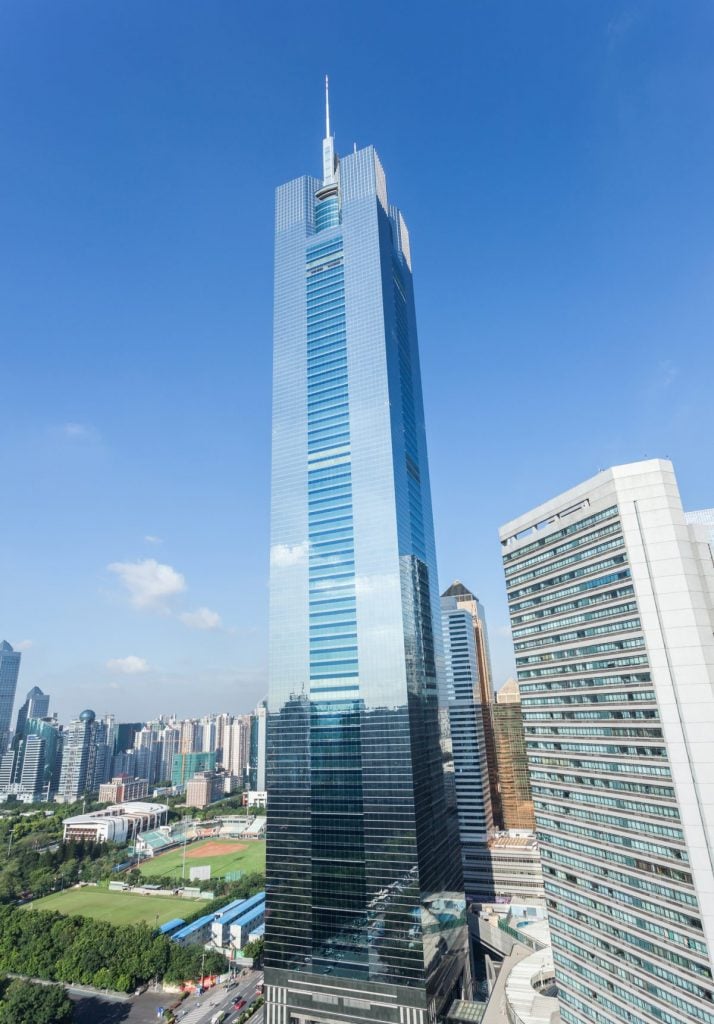 Tapei 101, ninth on our list of the world’s tallest buildings, stands 1,667 feet (508 meters) tall and is located in Tapei, Taiwan. Known for its sustainability, Tapei 101’s facade features a double-paned green reflective curtain, energy-efficient lights, and low-flow water fixtures. Because of its location and the inherent threat of typhoons, there is a gigantic pendulum near the top of the tower that helps prevent the building from overturning in strong winds. 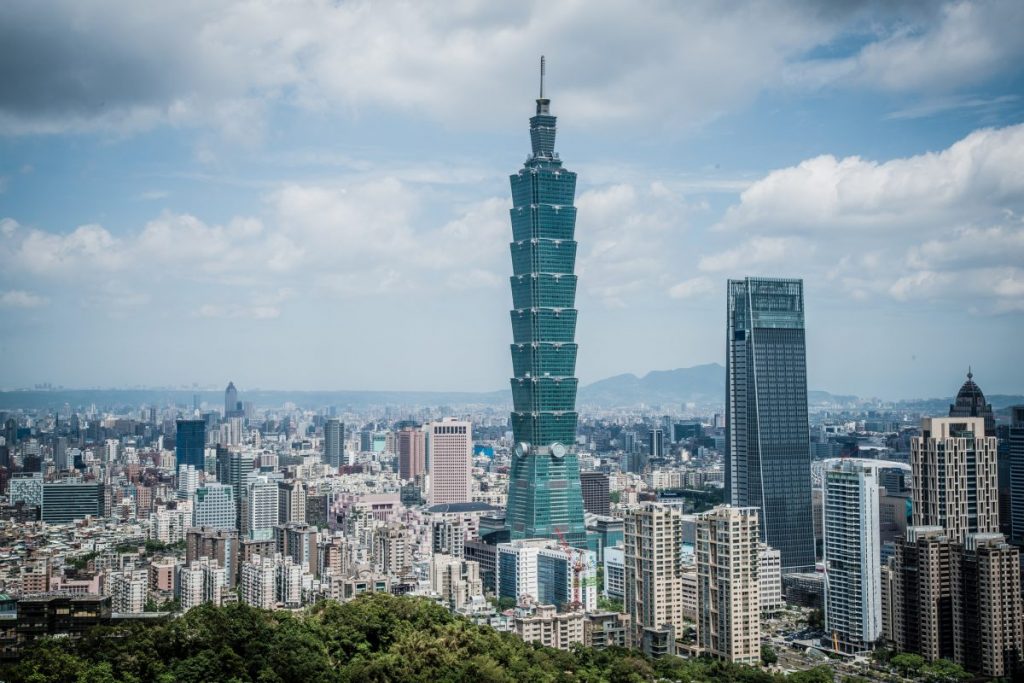 The last on our list of the world’s tallest buildings is the Shanghai World Financial Center in Shanghai, China. Completed in 2008, this 1,614 foot tall (492 meters) structure contains a 164 foot wide opening near its top to assist with its performance in high winds. Its architects were very forward-thinking when designing the building, as they accounted for the inevitable change in use, with a building of this nature, in its structural design. 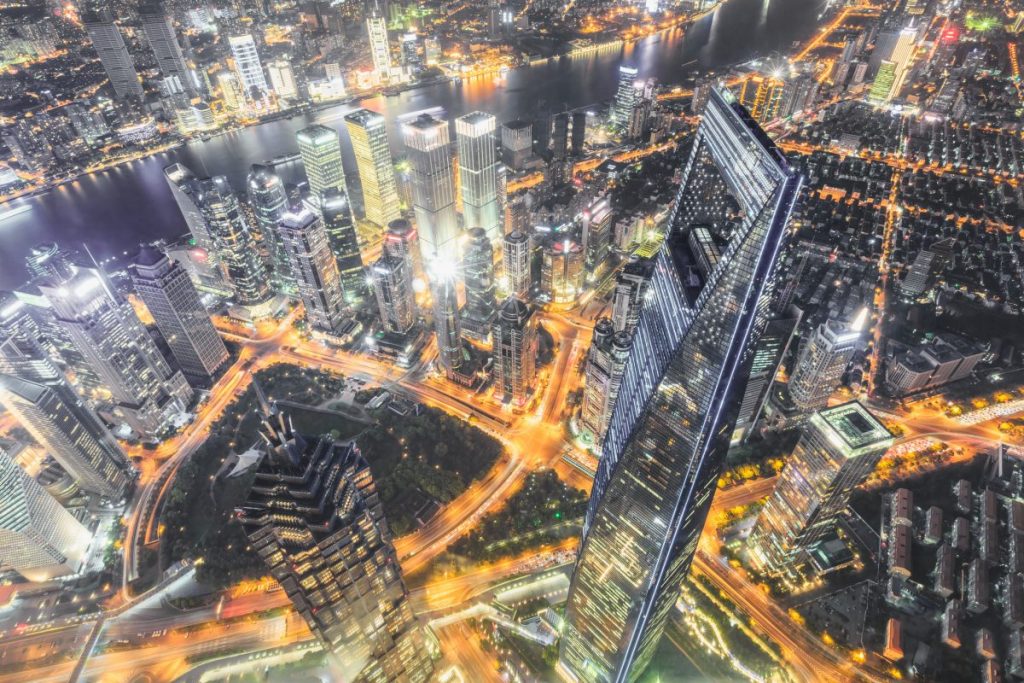