If you’ve ever looked upon a starry night, Venus has no doubt caught your eye, even if you didn’t know it. The planet shines the brightest of any object in the Earth’s night sky, after the Sun and Moon. Its spectacular radiance has made it a major fixture in civilizations across humanity for as far back as records have existed. Venus was also the very first planet to have its journey plotted across the night sky, as long ago as the second millennium BCE.

It’s named after a goddess

Venus is named for the ancient Roman deity of divine beauty and love. Ancient Romans believed that there were only four other planets in the Solar System, besides Earth⁠—and Venus shone the brightest and most beautiful of them all. The planet’s romantic name has long linked it to love and femininity throughout history. 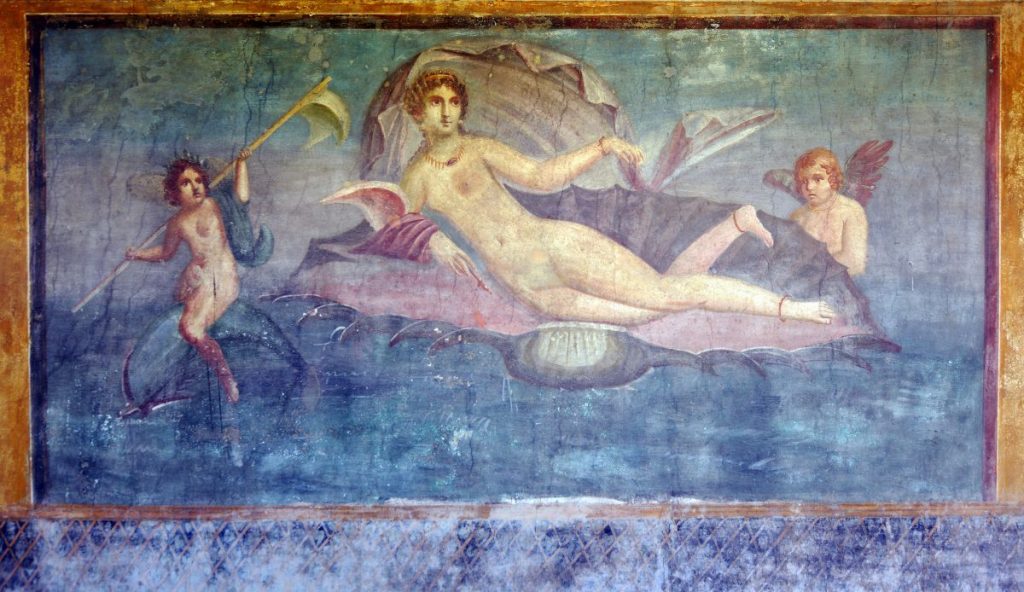 It’s also known as the morning star and evening star

The ancient Greeks once believed that Venus was actually two separate objects, a “morning star” and an “evening star.” When it’s on one side of the sun, Venus appears to lead the sun as it travels up into the sky, rising a few hours before sunrise. Then, as the sky brightens, it will fade into the daylight. This is the morning star. When Venus is on the other side of the sun, it appears to trail the sunset. As the sky darkens, it brightens in the night sky. This is the evening star. The ancient Greeks called the morning star Phosphoros or the bringer of light. And they called the evening star Hesperos, the star of the evening. It wasn’t until a few centuries later that it dawned on the Greeks that both stars were actually the same celestial body⁠—the one and only Venus. 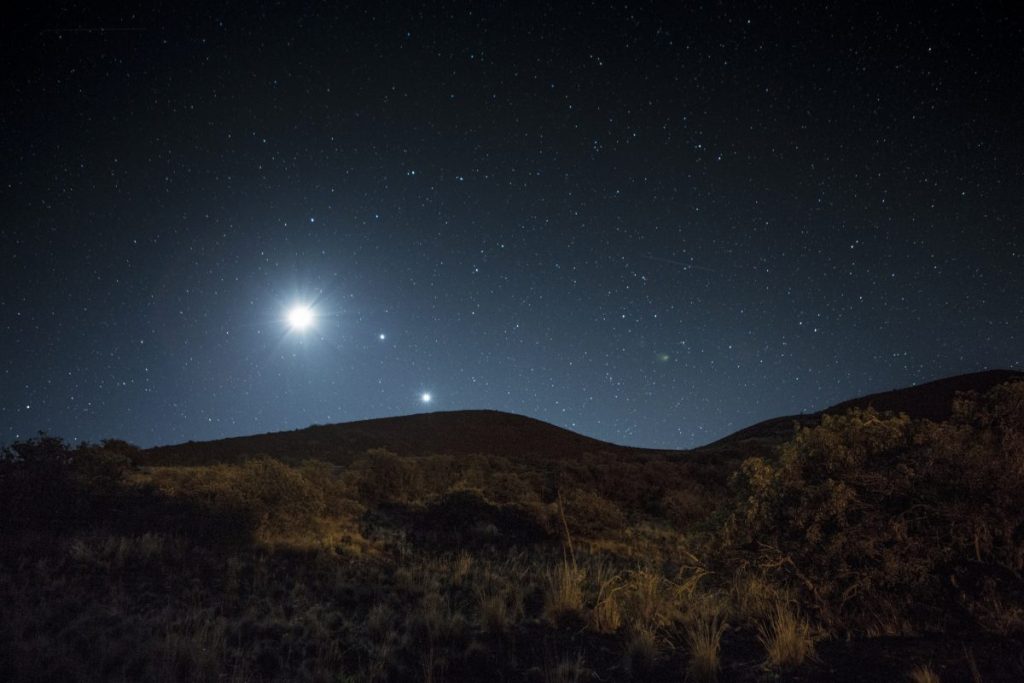 Venus is the closest planet to Earth in the Solar System, and both planets are very similar in size. For those reasons, they are often referred to as sister planets. The mass of Venus is about 81% of the mass of Earth, and there is only about a 400-mile difference in diameter between the two planets. The climate of Venus might have also been very similar to Earth’s, billions of years ago. There is evidence that Venus once had vast oceans or large bodies of water. However, due to the planet’s high temperatures and hostile atmosphere, any trace of water has long since boiled away. 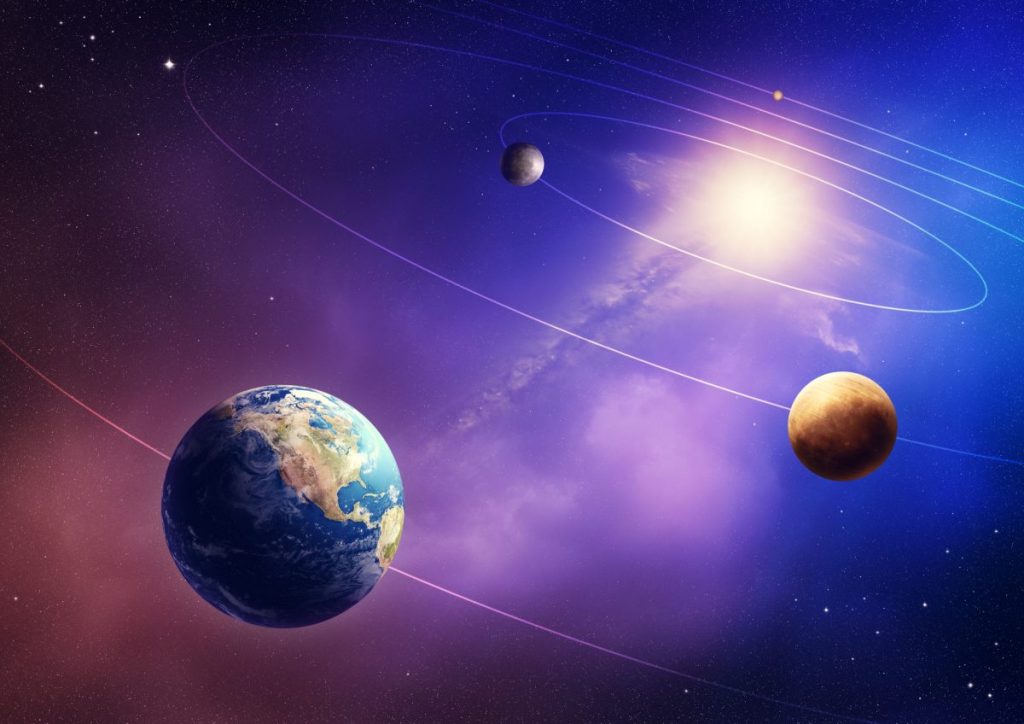 When it comes to hot planets, Venus takes the top spot. With a surface temperature averaging 863°F, it’s the hottest in the entire Solar System. The planet has a thick cloud layer composed of 96.5% carbon dioxide, which prevents almost all heat from escaping, and causes the greenhouse effect. Because of this, any possible water sources have long since evaporated, billions of years ago. Venus’s temperature doesn’t vary much between day and night either, due to the sluggish movement of solar winds across the surface of the planet. Because Venus doesn’t tilt on its axis, it doesn’t have any seasons either. 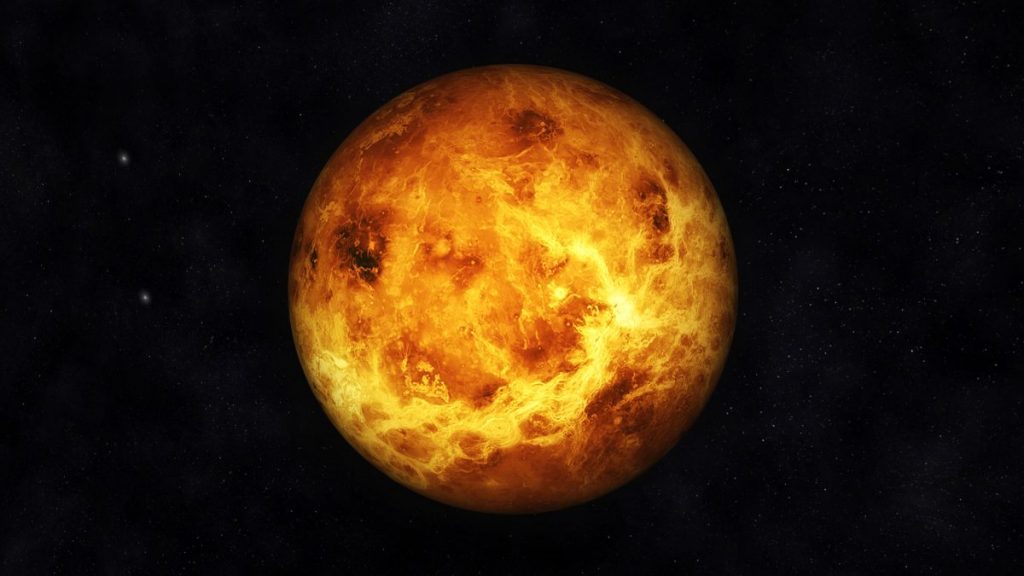 Most planets, including Earth, rotate counterclockwise on their axis. Venus, on the other hand, spins clockwise⁠—the opposite direction than other planets. This is called retrograde rotation, and it can possibly be attributed to an asteroid collision which knocked the planet off its original rotational path. The only other planet in the Solar System with a retrograde rotation is Uranus. 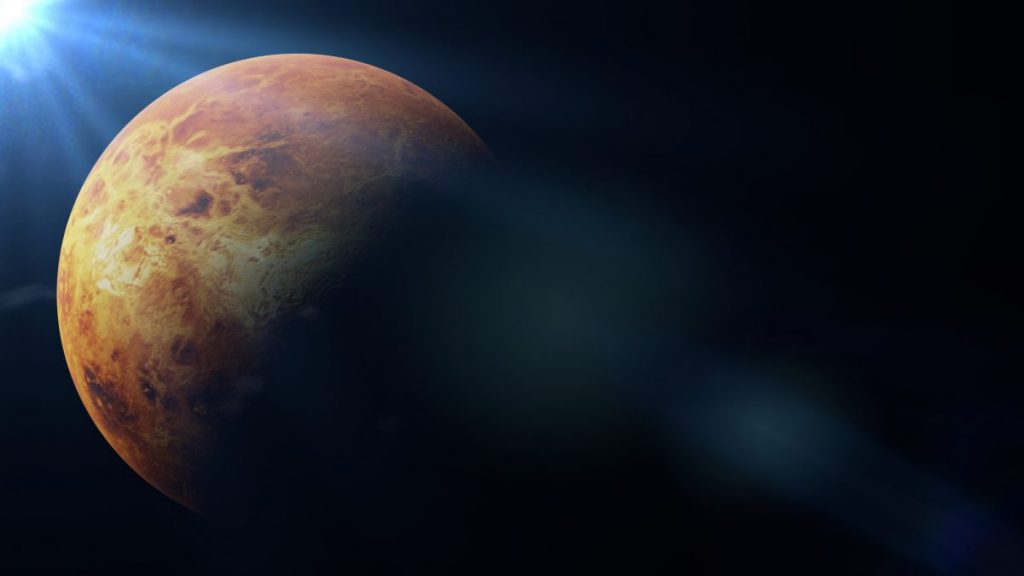 Its days are incredibly long

Venus has the longest days out all the planets in the solar system. One day on Venus lasts longer than its entire year. The slow rotation on its axis means it takes the planet a whopping 243 Earth days to complete one rotation. The planet’s orbit around the sun takes 225 Earth days. This means a year on Venus is actually 19 Earth days shorter than a single day on Venus! This phenomenon might be the result of the planet’s unusual retrograde rotation.

It’s under a lot of pressure

The atmospheric pressure on the surface of Venus is 93 times what we experience here on Earth. To feel that kind of pressure on this planet, you’d have to dive over half a mile below the ocean. This means that any small meteorite entering Venus’s atmosphere is burned up by the pressure alone⁠—which is why the planet has no small craters on its surface. 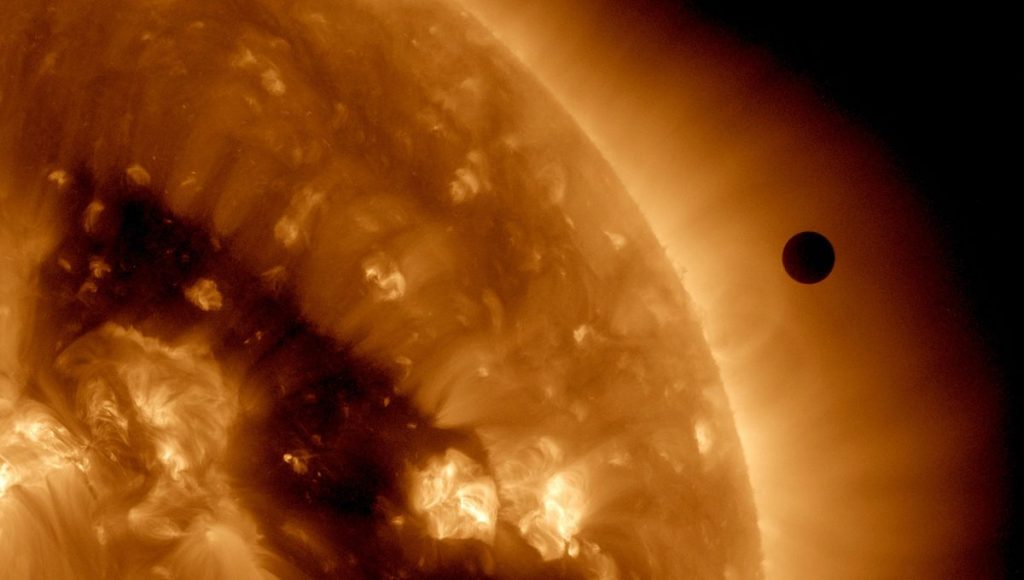 For most of history, astronomers had no way of knowing what was below Venus' thick clouds and imagined a lush tropical world with jungles and constant rainfall underneath. They couldn’t have been more mistaken. Not only is Venus, the hottest planet in the Solar System, but it also has an incredibly hostile environment. The planet’s atmosphere has two layers: the first layer is a cloud bank which envelopes the entire planet, and the second layer encompasses everything below these clouds. The cloud layer, which is composed mostly of sulfuric acid and sulfur dioxide, is so dense that 60-75% of the sunlight that hits Venus is reflected right back into space. Its impenetrably thick atmosphere means that not only is it hellishly hot, but hardly any sunlight reaches the surface. 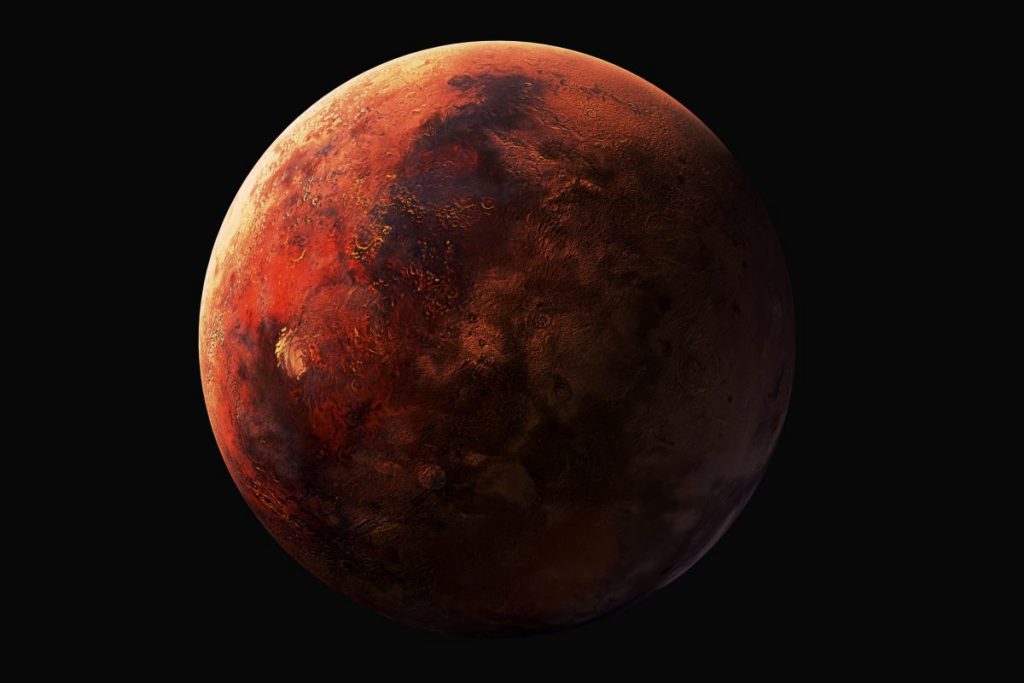 Venus has the most volcanoes of any planet in the Solar System by a long shot. Scientists have counted over 1,600 major volcanoes or volcanic features, with many more smaller volcanoes. Nobody knows the exact number for certain, but there might be over 100,000⁠—or even 1,000,000. The entire surface of the planet is covered with volcanic features and old lava flows. There are roughly 1,000 volcanic craters and crater remnants that measure over 600 miles in diameter. Volcanism has always played a major role in shaping the surface of Venus. There’s evidence that volcanic flows around 300 - 500 million years ago completely resurfaced the planet. 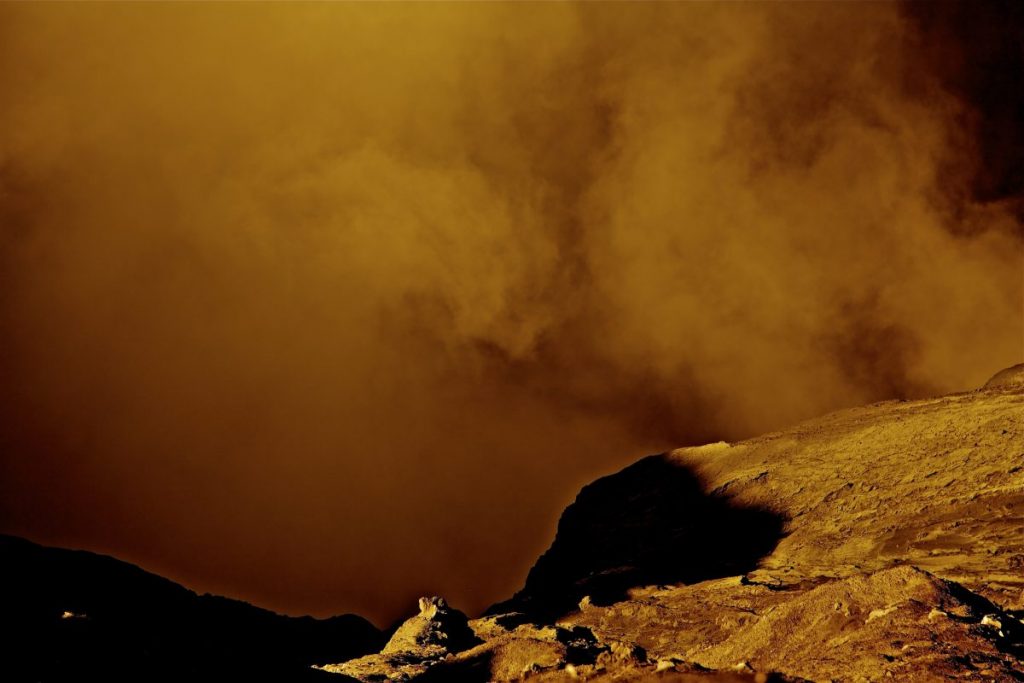