These Are the Hottest Peppers on the Planet

It’s true what they say, some like it hot -- and some like it hotter than others. When it comes to hot peppers, there’s an official ranking system for spiciness called the Scoville Scale, which measures the concentration of capsaicin. This is the chemical that makes spicy things spicy. If your only brush with heat has been the jalapeno, the pepper that most people think of as “burn-your-tongue spicy,” jalapenos only register at a measly 2,500 to 8,000 Scoville Heat Units (SHU). Now, just think of what a 100,000 SHU pepper would do. How about a 2,000,000 one?

Heat level: 100,000-350,000 SHUThe harmless-looking Scotch bonnet gets its name from its resemblance to a Tam o’ Shanter, those floppy tartan bonnets with pom-poms that Scottish people traditionally wear. But one bite of this scorching hot Scot will have you doing the Highland fling. Despite the name, slightly sweet Scotch Bonnet peppers actually hail from the Caribbean and are frequently found in fiery dishes there, such as jerk chicken or pork, as well as in West Indian pepper sauces. 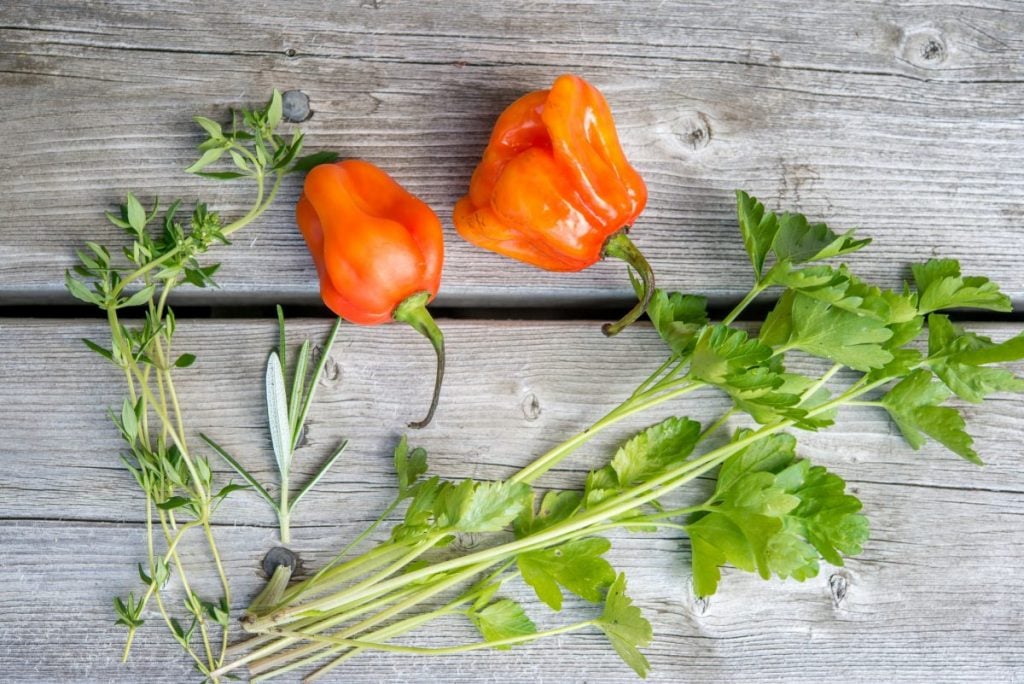 Heat level: 100,000-350,000 SHUJust because you can find this little orange firebomb in the produce section of every grocery store these days doesn’t mean it’s any less of a threat to your tongue. This salsa-friendly scorcher has its origins in the Amazon but was brought north to Mexico, where it is now most commonly grown. Ole! 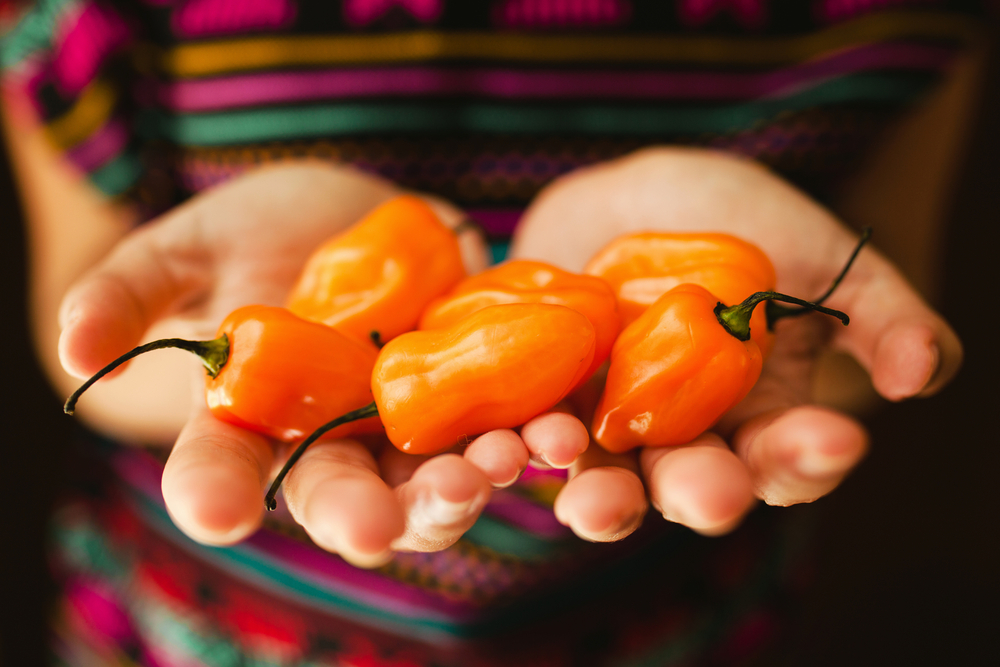 Heat level: 125,000-325,000 SHUThe aptly named Devil’s Tongue might flame-torch your tastebuds with its hellish heat, but this demonic addition to the hot pepper world actually has rather humble origins. It was first discovered by an Amish farmer on his farm in Pennsylvania, where he found it just casually growing in his garden amongst other habaneros. If you are actually able to ignore the blazing inferno in your mouth, fans claim it has a bright, fruity, even nutty flavor that works great in salsa if you can handle it. 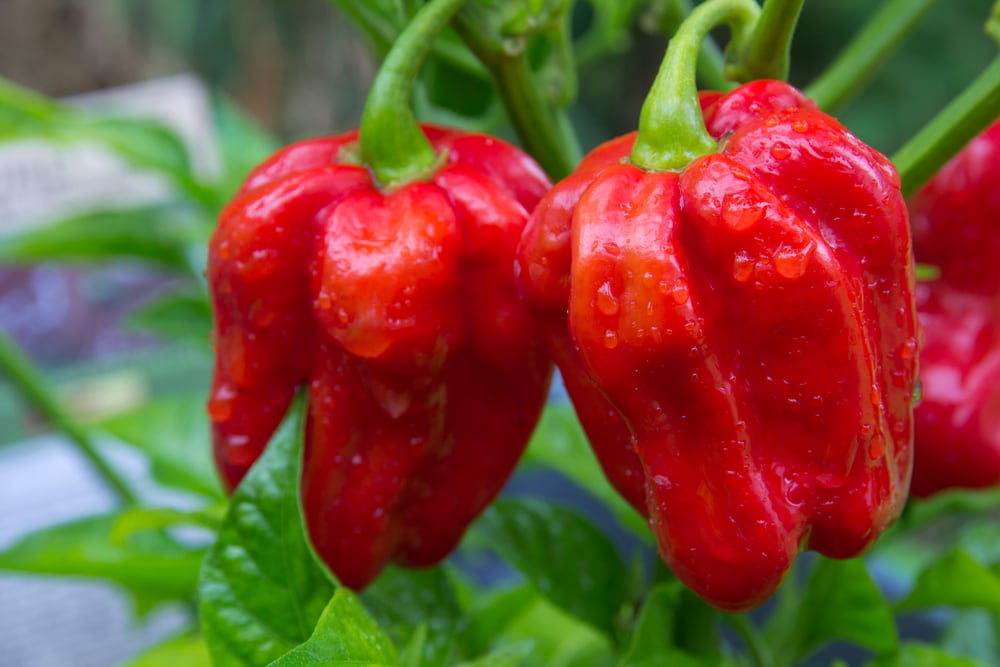 Heat level: 1,000,000-1,500,000 SHU)Naga Morich is Bengali for “serpent chili,” and with 1,500,000 SHU, these peppers certainly have quite the bite. The Naga Morich was the first pepper in the world to break the one million SHU mark. In northern India and Bangladesh, where these chilies hail from, they are often eaten as a side dish while still unripe and raw. Fans claim they can detect subtle notes of orange and pineapple somewhere in the heat. Whether that’s possible after burning your insides with a pepper hot enough to be named after a venomous, biting reptile is debatable. 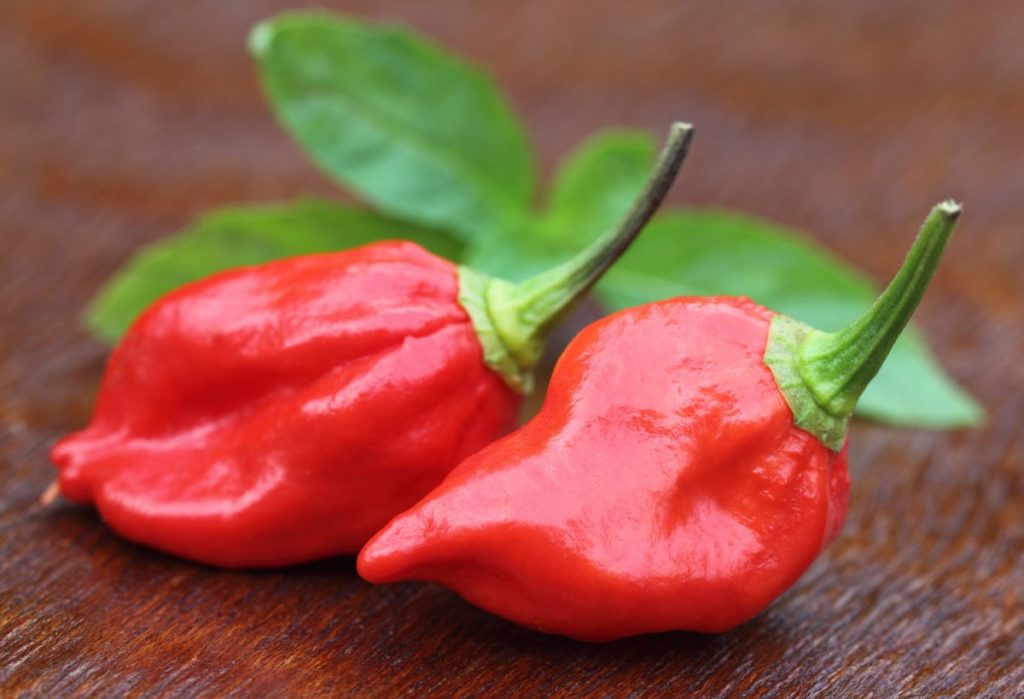 Heat level: 800,000-1,001,304 SHUYou can go ahead and blame the Ghost Pepper, also known as the Bhut Jolokia, for some of the most tongue-searing curries and chutneys in the world. The ghastly heat of this angry red vegetable is so mind-blowing that it’s actually used in military weaponry. You can also find ghost peppers all over the internet too; they are the hot pepper of choice for those ill-advised Youtube eating challenges. 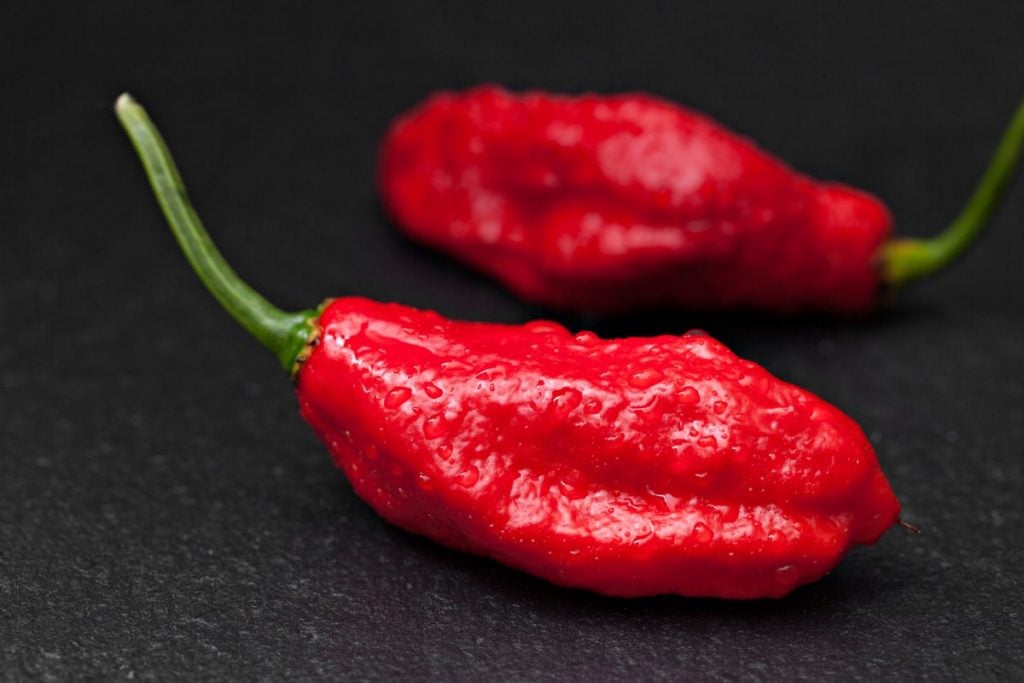 Heat level: 1,086,844 SHUSo spicy its skin is blistered and red like a really bad sunburn, the man-made Spanish Naga has to be grown in a network of plastic tunnels under intensely hot conditions in order to achieve its off-the-charts spice levels. Although this pepper is grown in Spain, you can blame the Brits for this one; it was actually first created in the UK. 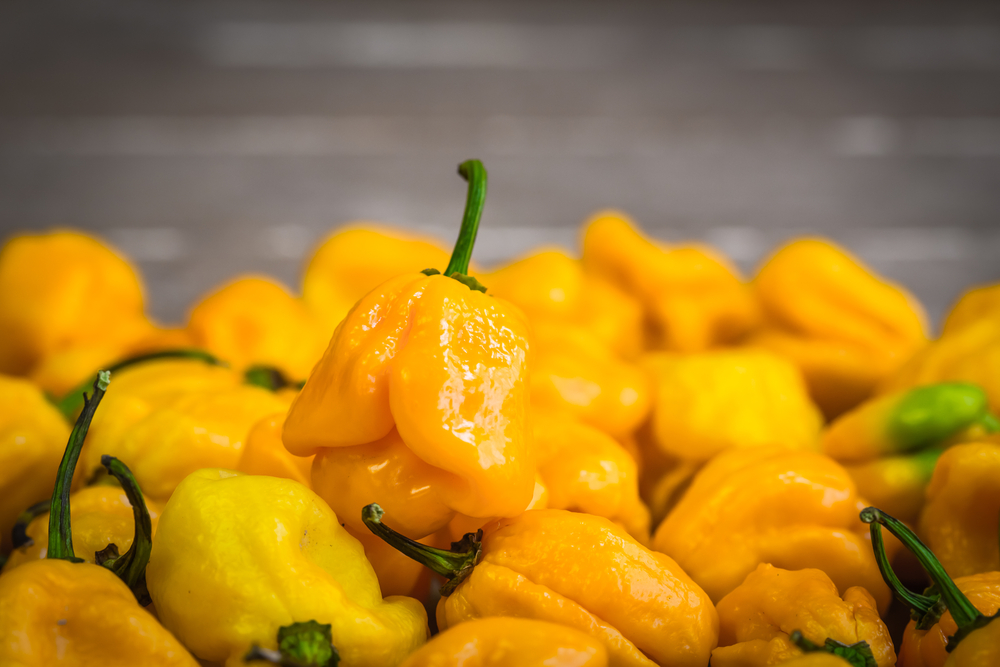 Heat level: 1,382,118 SHUThis blistering hot pepper is so out of this world it actually goes against the laws of nature; it can’t even reproduce itself without human help. A hybrid of the Ghost Pepper, the Naga Morich and the Trinidad Scorpion, if you want to grow it yourself, you can only buy seeds from its grower and creator, Gerald Fowler. 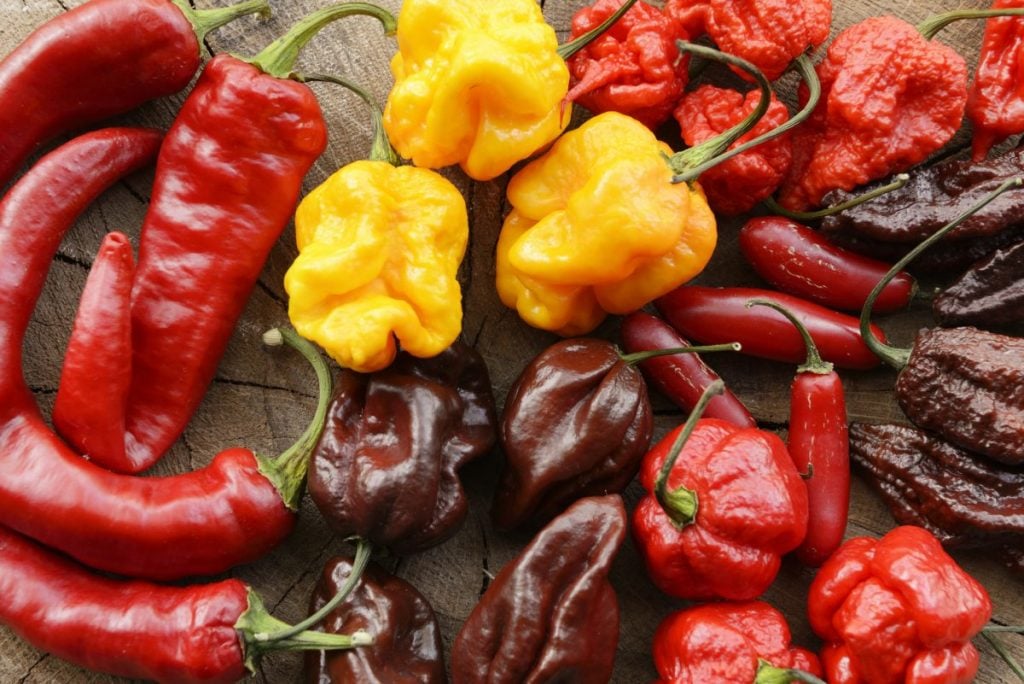 Heat level: 923,000-1,853,396 SHUThis brutal bruise-colored pepper is so high on the heat scale that you actually need gloves and goggles to handle it safely. That’s right, with a rating that nearly hits the two million SHU mark, most people would consider even one lick of this vicious vegetable a form of torture. And yet, fans consider this traumatic Trinidadian tongue-melter to be among the tastiest in the hot pepper family. 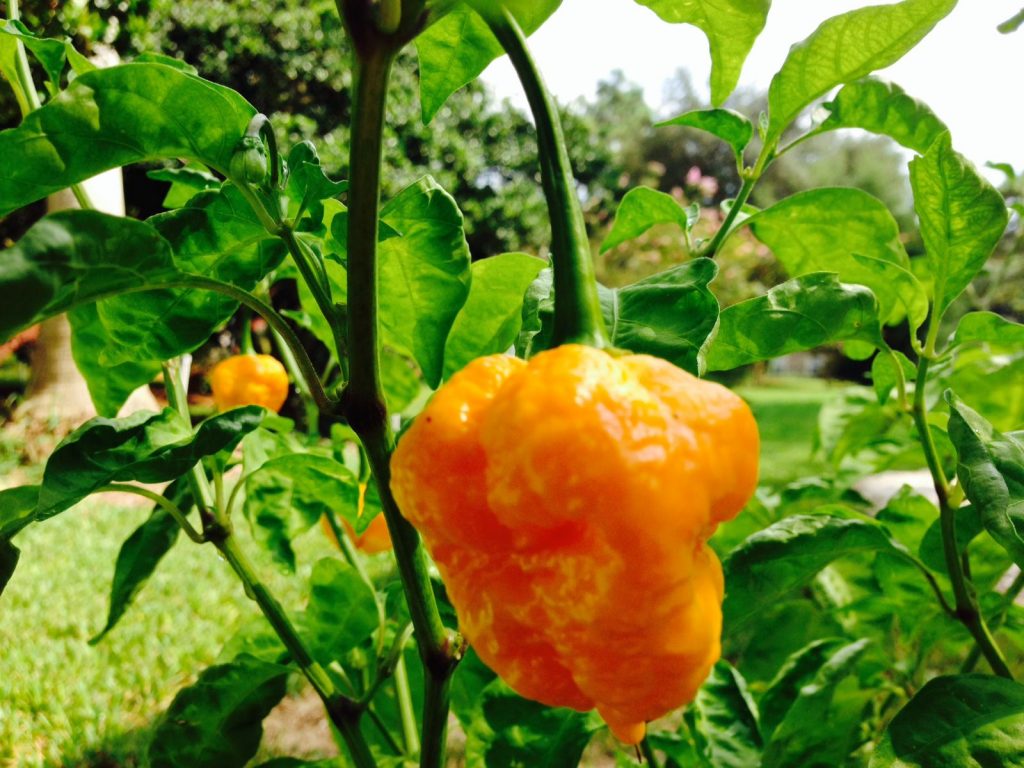 Heat level: 2,009,231 SHUWith a name like Scorpion, you already know this pepper hurts. The former world champion as the hottest pepper on earth for several years running. Furthermore, it’s still the spiciest naturally growing pepper known to man. It has as much blistering-hot capsaicin as 25 mL of the pepper spray officially used by police officers. Despite that, its lauded by fans for its fruitiness, if you are even able to taste anything anymore through your sobs after biting into one. 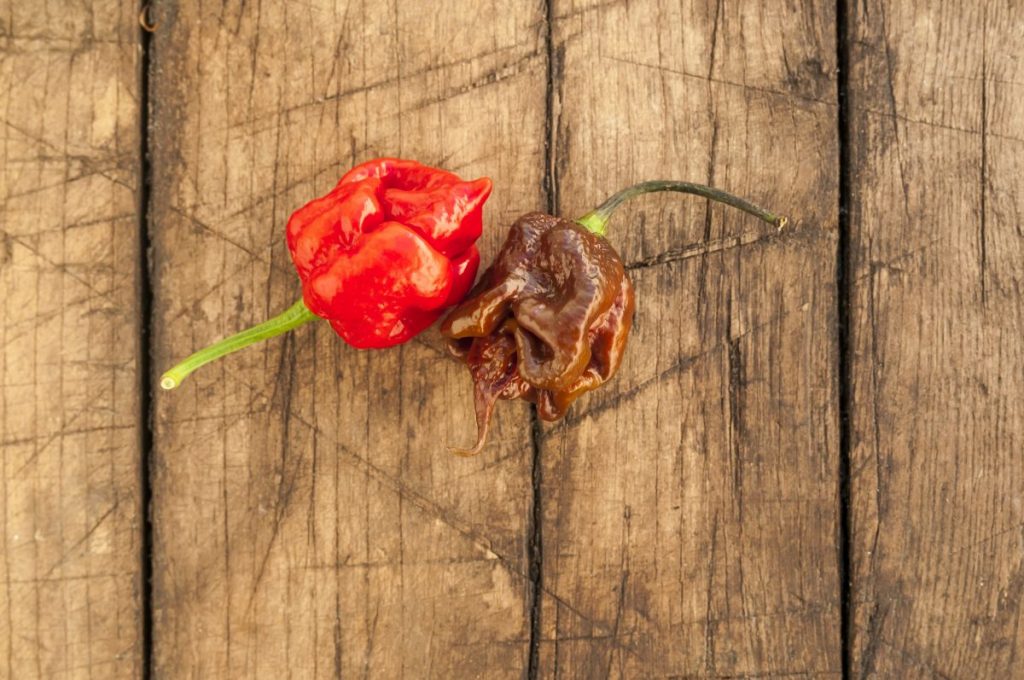 Heat level: 1,569,383-2,200,000 SHUHere we have it. The grand high priestess of hot peppers. She took the crown in 2013, and so far, she hasn’t been dethroned yet. Created in South Carolina by a man named Ed Currie from a blend of out-of-this-world hot peppers from the Caribbean and Pakistan, the Carolina Reaper is so famous that it’s featured on all sorts of merch. Rumor has it that one man who ate one was tested for brain damage afterward. Yeah, the Carolina Reaper is that bad. With its fluorescent red color, alien-like spiky texture, and scorpion-like tail, much like a venomous animal, it’s practically screaming at you to back away. Far, far away. Don’t say you haven’t been warned. There are plenty of reasons to fear the Reaper, and it certainly looks grim for anyone who ever finds themselves in the same room as one of these. 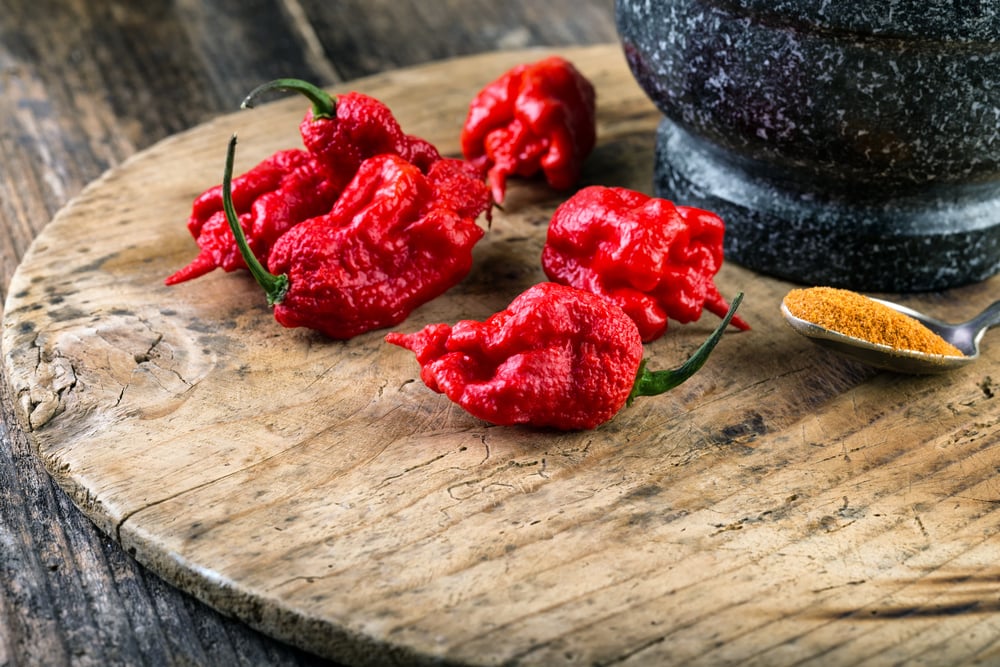