Television viewership and ticket sales may be down for the National Football League, but that hasn’t had any effect on the player’s salaries. At least not yet. Top players make over $30 million a year, just for their playing time. Some of their endorsement contracts eclipsing that number by a wide margin - so you can well imagine that these guys have some serious change to invest in their toys. While some of the NFL’s sickest rides may seem outrageous, there are also a couple of sleepers out there that may cause you to raise an eyebrow. There is no accounting for taste, especially when it comes to the cars that people choose to drive, and here is the proof.

There is not a motorhead in the world that isn’t familiar with Eleanor the ’67 Shelby GT 500 from the movie “Gone in 60 Seconds”. GT Fastbacks normally sell in the 150-175K range but it has been reported that Reggie dropper another $300 thousand to have his restored not only with full matching numbers but as an exact replica of the car that can drive men beyond rational limits. Eleanor has always been something special and this has to be one of the coolest rides in the NFL. 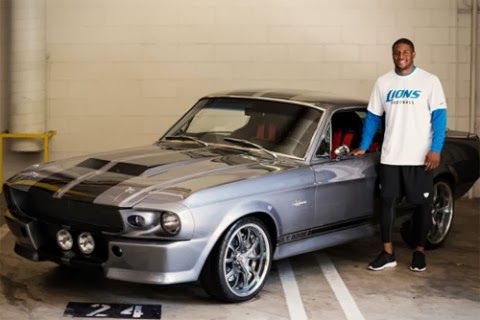 Antonio Brown became a free agent in September 2019 after he was traded from the Pittsburgh Steelers to the Oakland Raiders, only to be cut by the Raiders, signed by the New England Patriots, and subsequently cut by the Patriots less than a month after arriving in Boston. He actually has two other cars from Rolls-Royce, a Phantom, and a Ghost, but the sickest has got to be his Wraith decked out in a galactic inspired pattern featuring his initials and number on the side of the car along with a silhouette of the wide receiver in full stretch. 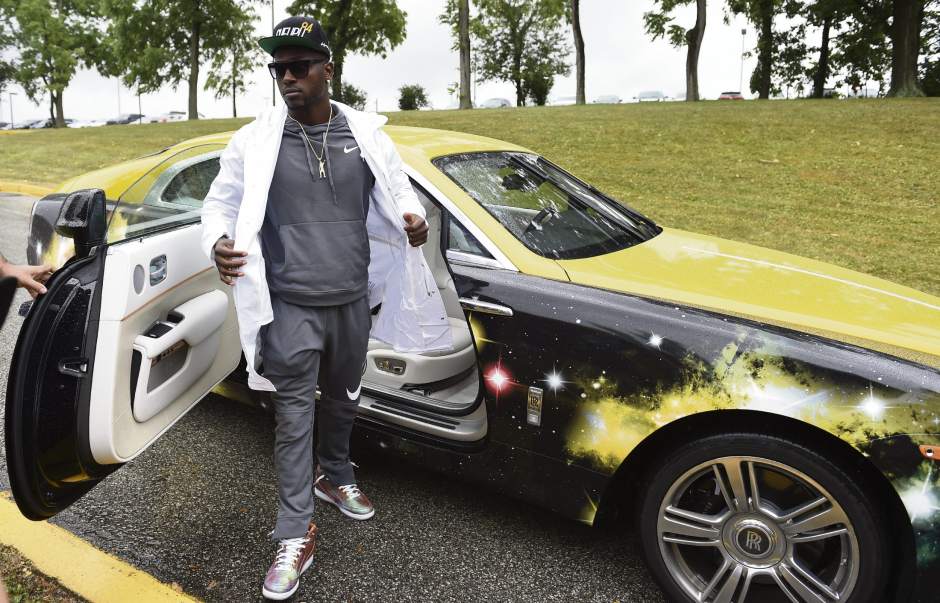 This isn’t the most expensive or fastest car on our list but the story behind it makes it one of the coolest rides we found. When Ezekiel was picked fourth overall in the 2016 NFL Draft, he used part of his signing bonus to buy a $60 thousand Corvette Stingray C7 Z06. His bonus was way more than that but the 60K was all that he left after he fulfilled his dream of buying his mom the house of her dreams. 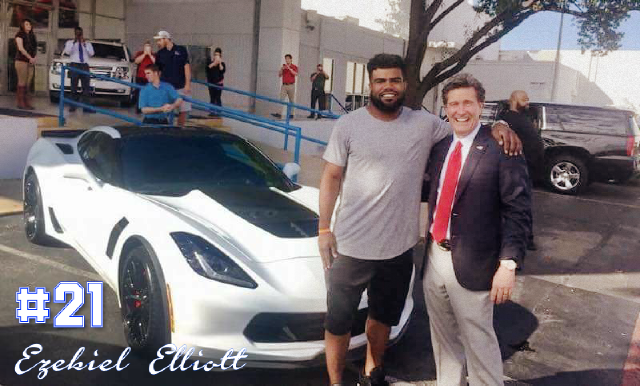 Marion Barber is living proof that old dreams die hard. Over his seven seasons in the NFL Marion Barber bought and sold a lot of truly stunning cars but it says something about childhood dreams that the one he kept was a 1971 Chevrolet Impala. Estimated to have had $130 thousand worth of upgrades the car features gold plated rims, custom gold paint, and interior and a top-shelf entertainment system. 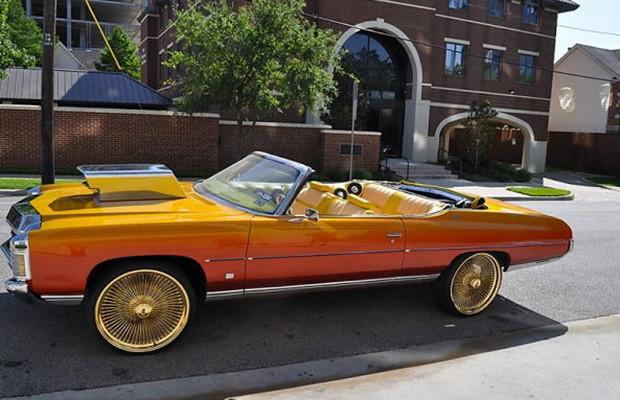 Depending on your taste you could say this car is sick or think damn that is a sick car. Only being built for three years (1971-1973) the Centurion is not a car you see a lot of and never quite like this one example. It has a purple exterior with a green interior, 32-inch custom wheels made by Asanti that are painted green with purple in the center, a custom 15" suspension, custom stereo, and custom made Wilwood breaks and metal dash. 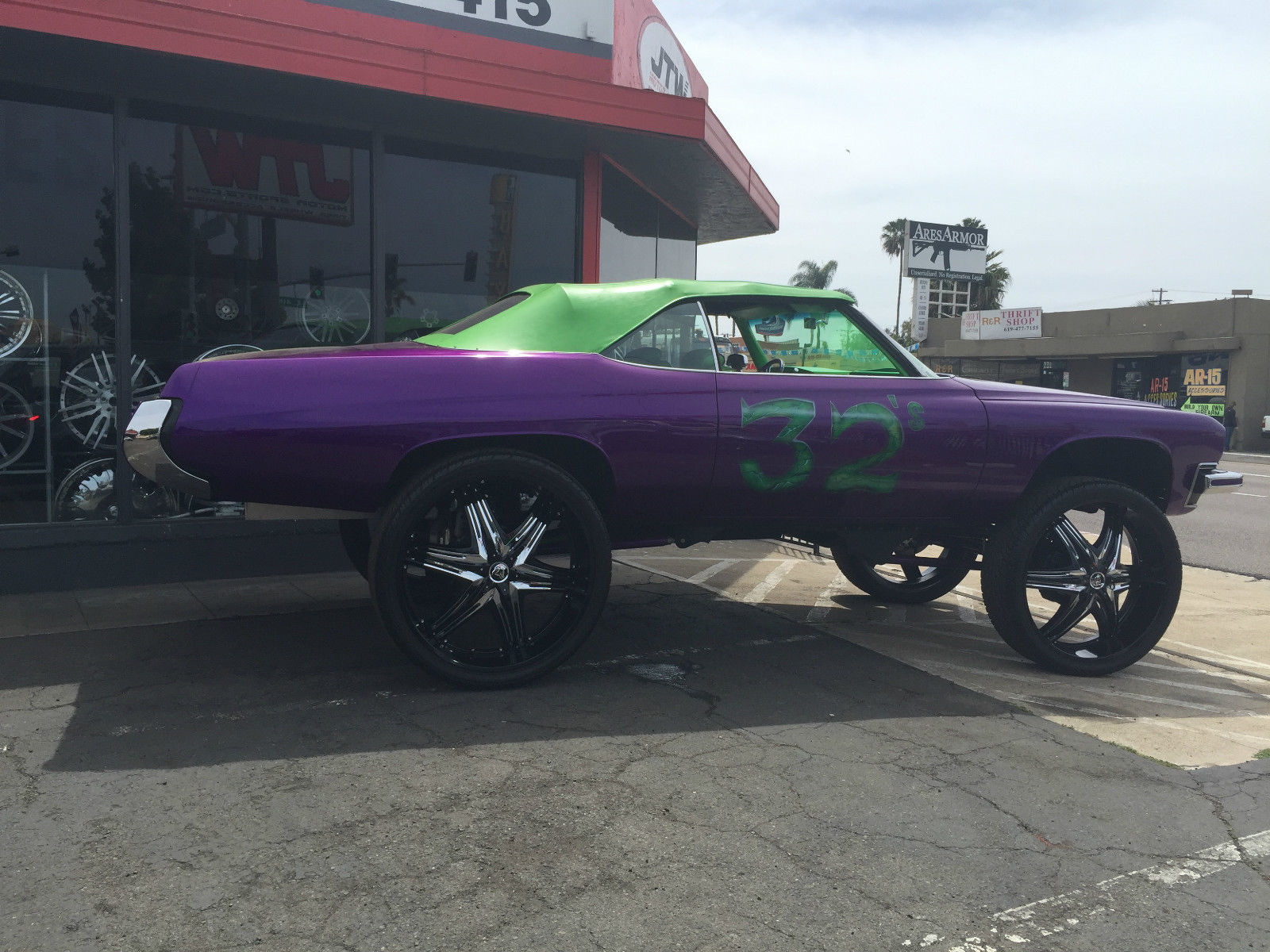 When you spend 12 seasons as one the highest-paid players in the NFL you can and probably do own more than few nice rides and jay Cutler certainly has through the years. His favorite though is an Audi R8 GT that he bought when asked to come out of retirement and play just part of the 2017 season. Built on the Lamborghini Huracan platform the R8 GT has 602 bhp, 413 ft-lb of torque and can scoot from 0-60 mph in just 3.2 seconds. 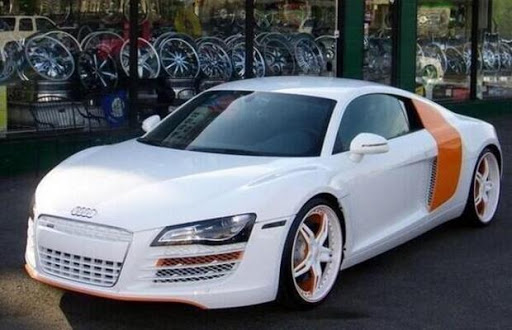 San Francisco 49ers linebacker Patrick Willis was known for his power, agility, and quickness on the football field and apparently, he loves a car with the same attributes that made him a star. The 2013 Aston Martin DB9 that is his favorite ride has been decked out with custom rims, full tinted windows and some modifications to the V-12 powerplant that reportedly lets it eclipse the 183-mph performance the car originally came with. 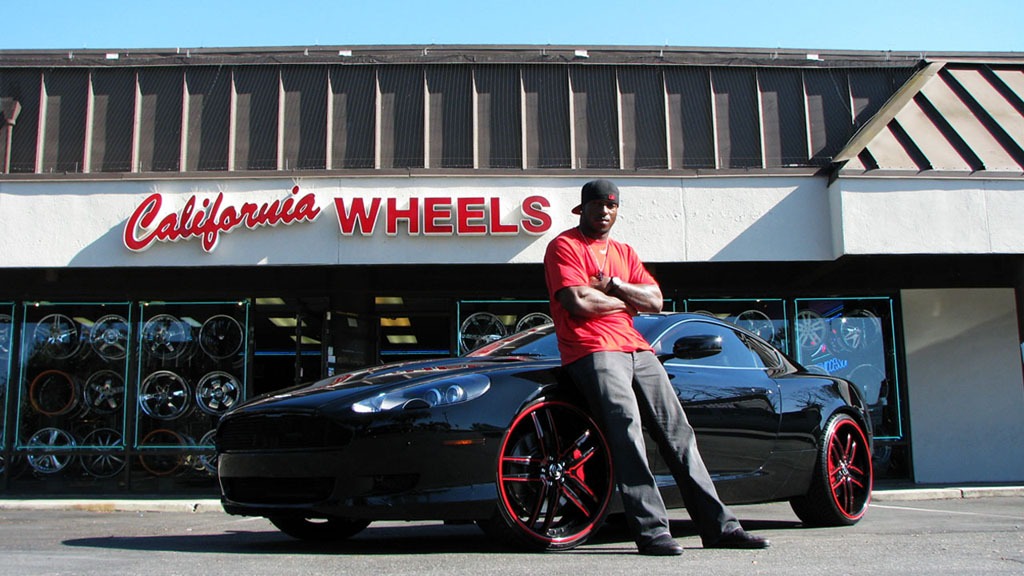 Having had several highly publicized run-ins with the law as well as a few high-speed accidents, one look at Drew Brees’s driving record tells you that he is a man that likes fast cars. He reportedly has five supercars in his stable but the crown jewel of his collection is a $2.2 million dollar Bugatti Veyron that has no trouble reaching 250 mph and can go from 0-60 mph in just under three seconds. If you got it, flaunt it. 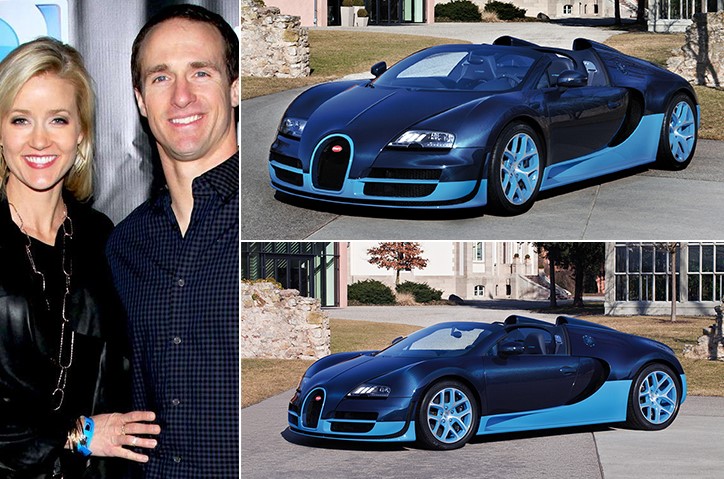 You might expect one of the highest-paid quarterbacks in the NFL to drive some low slung, twin-turbo, Italian supercar but remember Cam Newton plays in the state that is the home of NASCAR and one of the hot-rodding capitals of the world. His whip of choice is a gold-plated 1970 Oldsmobile 442 Convertible with diamond stitching on the seats, a custom front grille featuring the Carolina Panthers logo and matching gold-plated custom rims. With all that 24k gold on board, the car’s value is unknown. 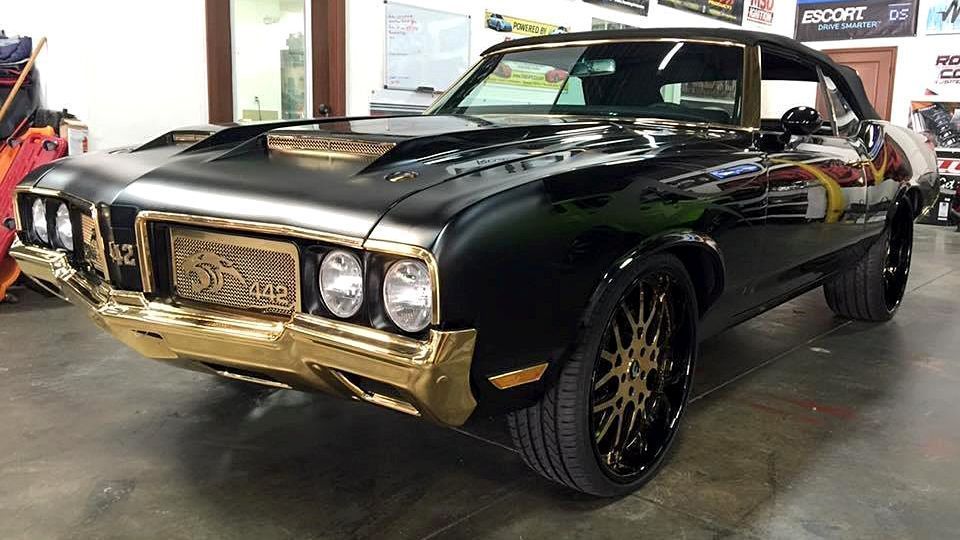 Seattle Seahawk quarterback Russell Wilson is a man who knows his cars and has an abiding love for the classics of yesteryear. He is the proud owner of a rare 1959 MG MGA Roadster. Once considered the fastest car built in Britain, the little roller-skate has a 72 bhp engine and is capable of 92 mph but is best known for having a super soft suspension that gives it a smooth ride without sacrificing the drivability or safety of the car. 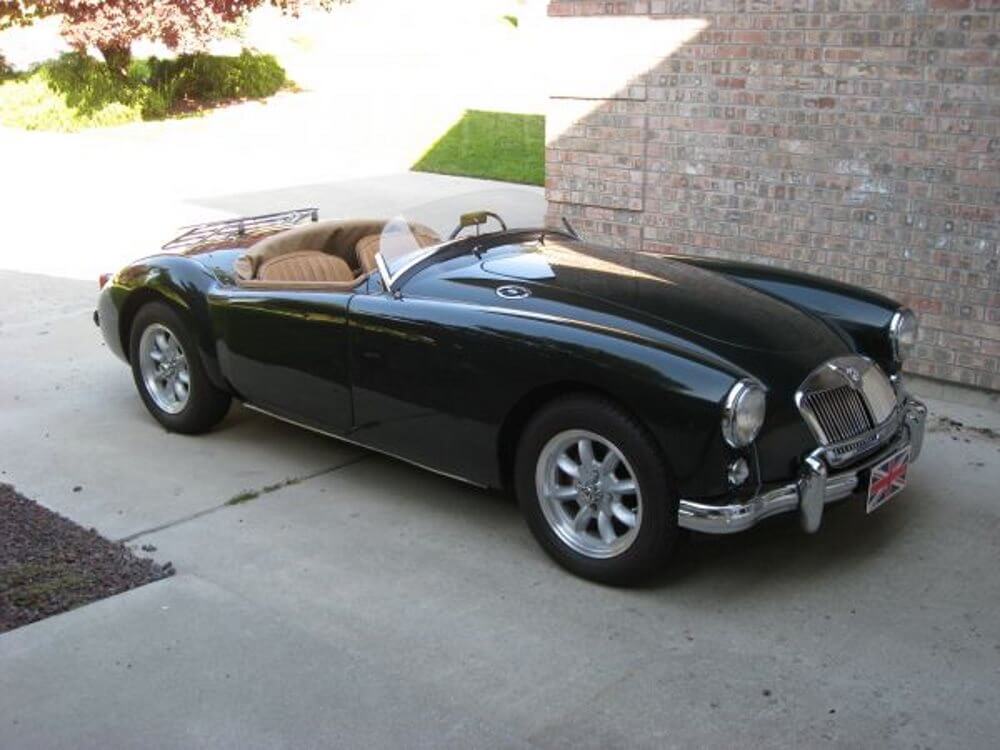 James Harrison, linebacker for the Pittsburgh Steelers is considered by many to the most dangerous man in football today and is widely known for inflicting pain on the opponent’s quarterback. With that rep, you might expect him to drive some big muscle-bound rig just for the intimidation factor but you would be wrong. His favorite car is a tiny 72 bhp Smart ForTwo with a 0.9-liter 3-cylinder engine and top-end speed of just slightly over 60 mph. That IS sick! 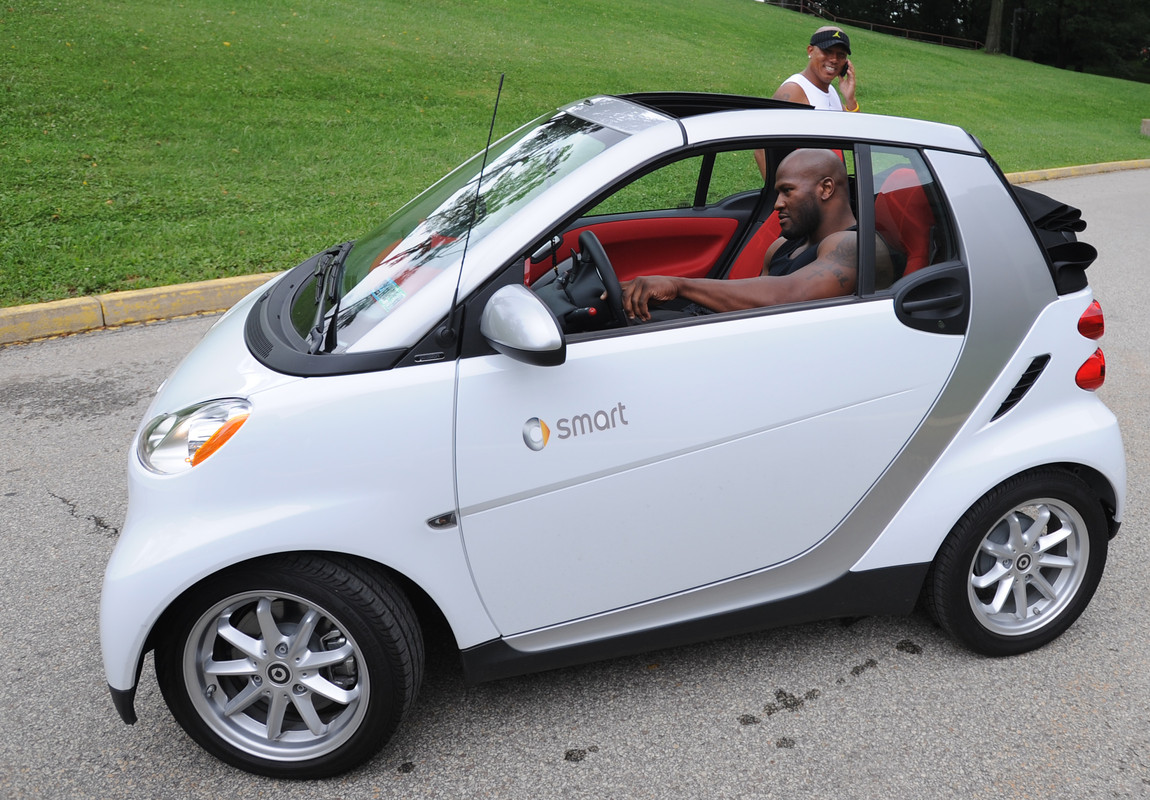 NFL linemen are known for being good sized fellows but at 6-foot-4-inch and 315-pounds, Michael Oher of the Carolina Panthers is an XXXL even in their XL world. As you can imagine, with a frame that size his options are rather limited when it comes to cars and doesn’t include anything with an Italian name. His ride of choice is one of the most luxurious cars on the market, a BMW 7-Series, complete with massaging, heated, and ventilated seats. 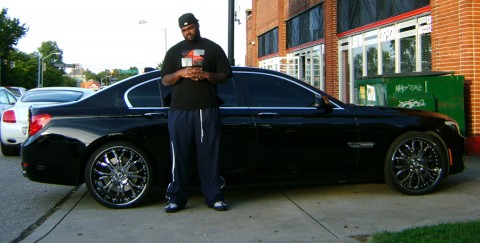 Alfred Morris has been bouncing around the NFL for some time now and has had a long if not stellar career. With his mindset though he should be in pretty good financial shape despite never having achieved superstar status. Even after 7 years in the league and a couple of million-dollar deals done he still drives a 1991 Mazda 626 that he bought for $2 while in college and only last year had refurbished for the very first time. 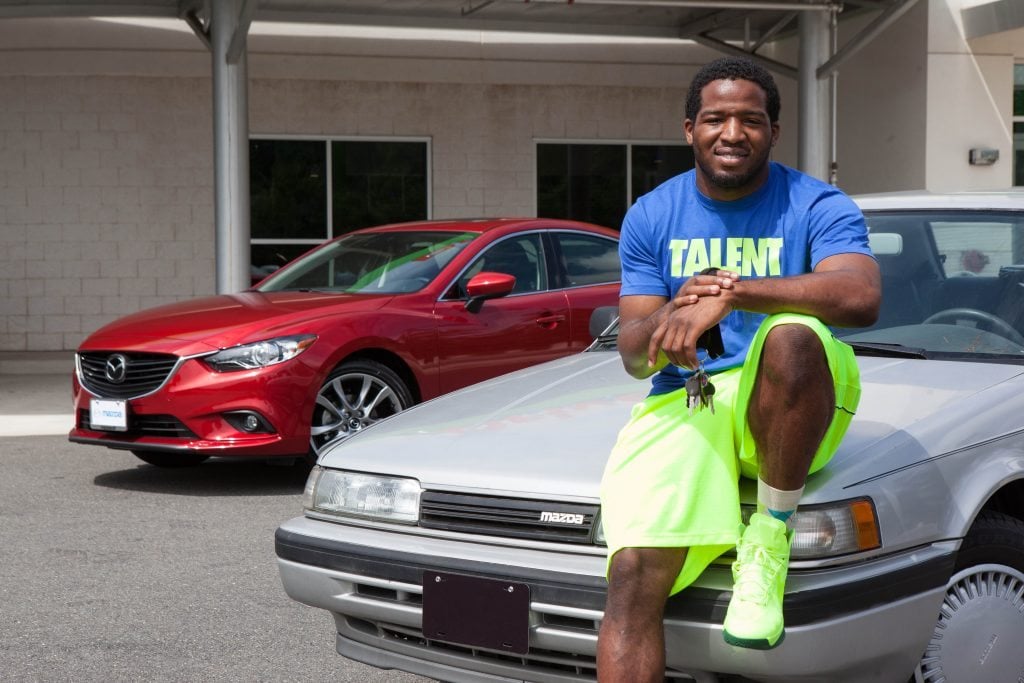 When you own a red Ferrari California, a customized Mercedes-Benz CLS63 AMG and a McLaren MP4-12C what do you pick as your daily driver’ how about the most expensive Rolls-Royce ever built. One of the best young receivers in the NFL, the Cleveland Brown’s Odell Beckham Jr is a young man who loves his cars and considers collecting them as his full-time hobby. Considering his earning potential and eye for noble steads it will be interesting to see what his garage looks like in a few years. 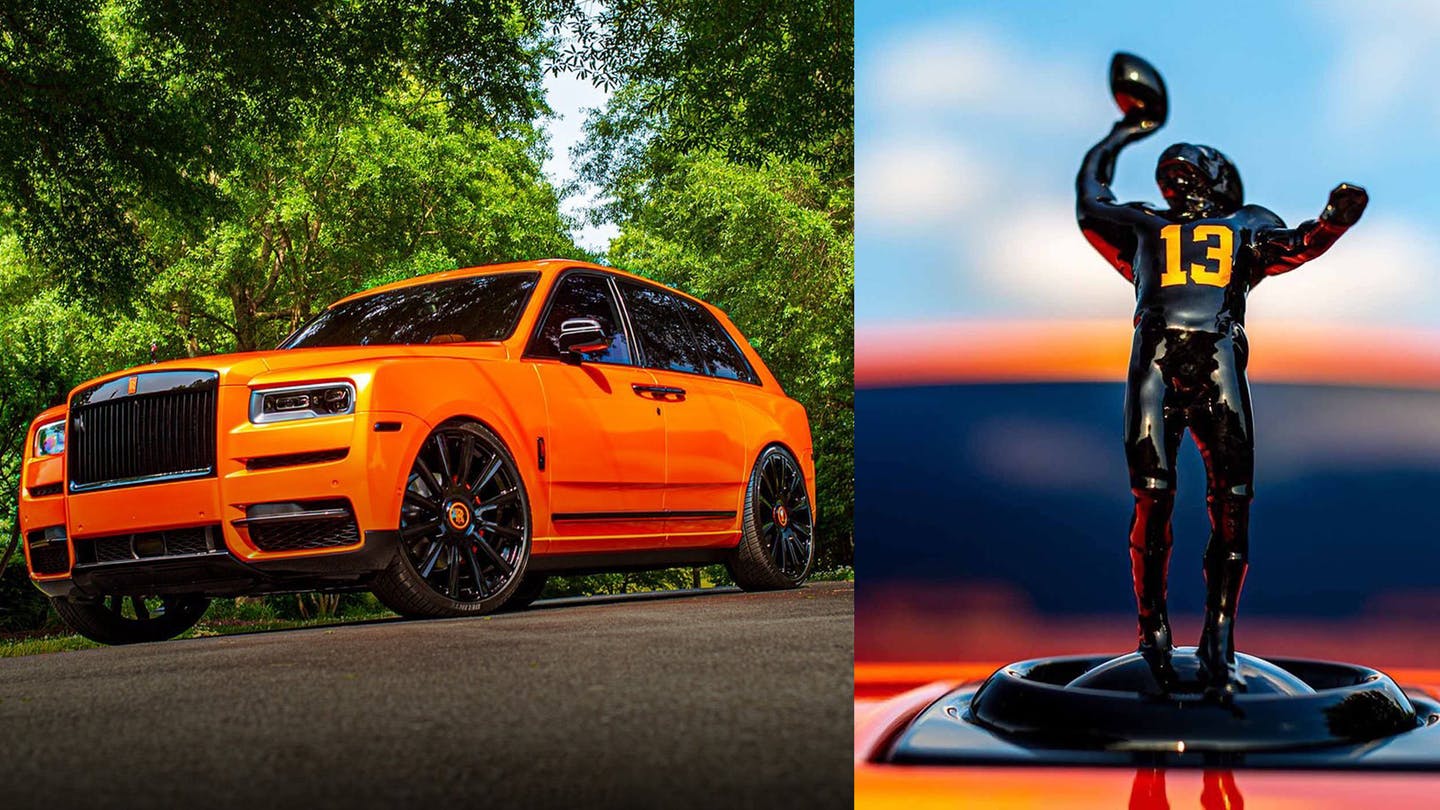 They say go big or go home and from the looks of the vehicle that Chad Ochocinco (Johnson) bought himself for his 32nd birthday he is a man that firmly believes in that principle. With room for the entire family and enough towing power to literally drag a house down the street, the Freightliner M2 106 is actually intended to be a short-haul trucker’s ride but then again if you got the money why not go for the power. 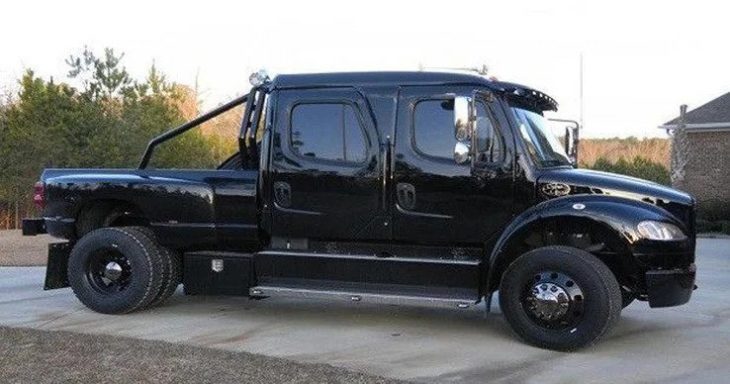