The Most Expensive and Valuable Beanie Babies

In 1993, Ty released the first Beanie Babies, and by 1995 it felt like the entire world was collecting them. The company deliberately limited the number of each toy they produced to create scarcity. Additionally, they were constantly creating new designs and retiring old ones. This led to a gigantic secondary market of collectors trying to collect the rarest Beanie Babies. For the most part, the most expensive and valuable Beanie Babies are either exclusives or have some very specific defects.

Following Princess Diana’s unfortunate death in 1997, Ty released a special edition purple Princess Diana bear to raise funds for the Diana, Princess of Wales Memorial Fund. Though the bear itself is quite common, its value goes up depending on what stuffing it contains. Most Princess Bears contain polyethylene pellets, making them common and not worth much to collectors. However, a small number of Princess Bears contain polyvinyl chloride (PVC) pellets instead. These Princess Bears are worth much more, with one selling for around $10,000 in January of 2019. 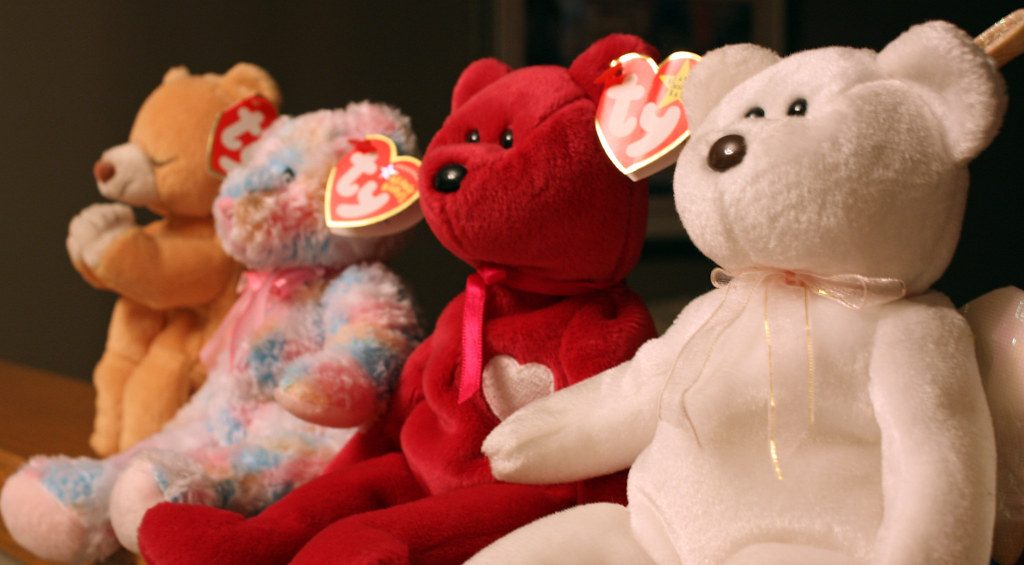 One of the first Beanie Babies to really become a collector’s item was Peanut the Elephant. Ty originally produced Peanut in June 1995, before the Beanie Baby craze had begun in earnest. For the most part, sales of the original Peanut were poor, and many stores wouldn’t carry more than a few Beanie Babies. Ty rereleased Peanut a few months later with a different color of fur, just as the craze really began. The original Peanut with royal blue fur quickly became a collector’s item and was the first truly collectible Beanie Baby. After several decades and many counterfeits, the royal blue Peanut’s value has fallen but still sits between $1,000 and $2,000. 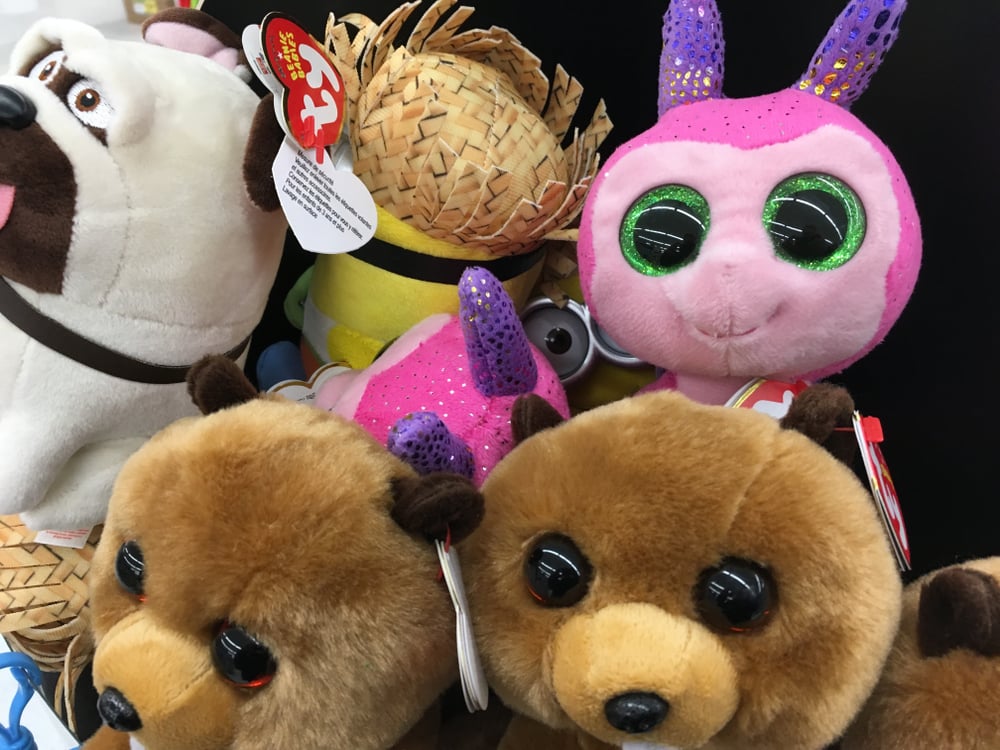 Even among Beanie Babies, Iggy is a unique case. Iggy the Iguana has had many different production cycles and a wide variety of designs. His tie-dye coloration changes wildly between each cycle, and his tongue can range from a dark blue to a neon rainbow. This led to many printing errors that dramatically changed his coloring. Add in the possible tag defects and placements, and Iggy becomes a Beanie Baby with unique collectibility. An Iggy with tag errors, PVC pellets, and rainbow coloring sold for almost $5,000. Even rarer defects, such as tags without print on their inside can push the value up to $15,000. 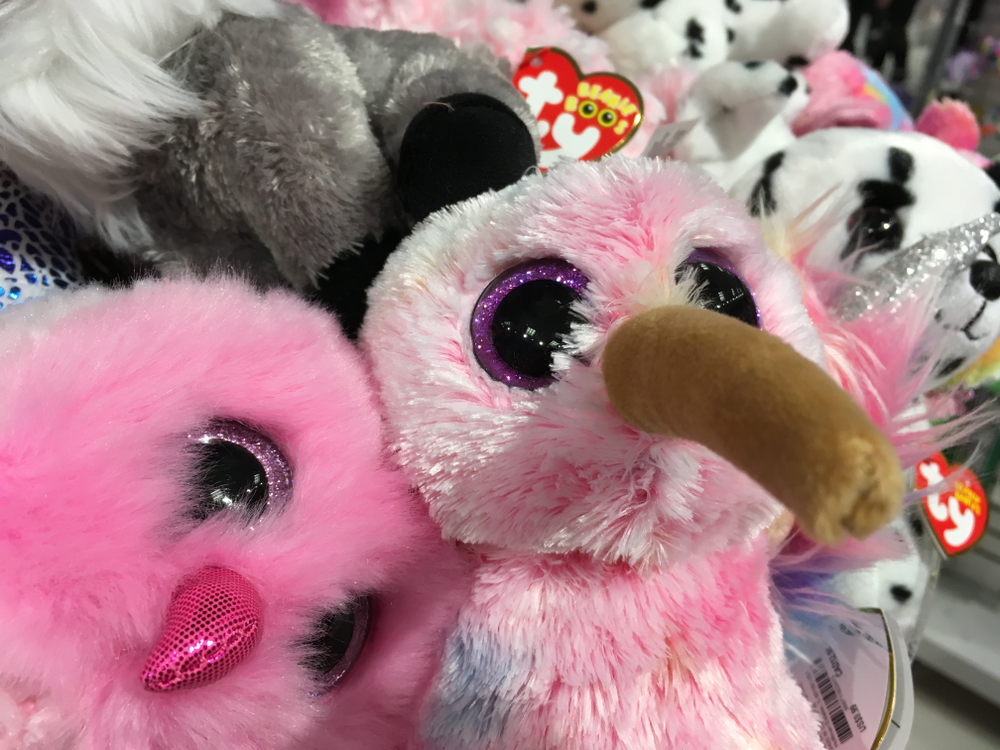 One of the most popular Beanie Babies is and was Claude the Crab. Since his release in 1997, Claude has had many variations, and most are worth less than $10. However, as with many Beanie Babies, defects dramatically alter Claude’s value. Recently, a Claude with 19 different errors sold on eBay for around $9,000. This is probably the highest price that Claude can reach, though variations with a few errors will likely still be worth a significant amount. 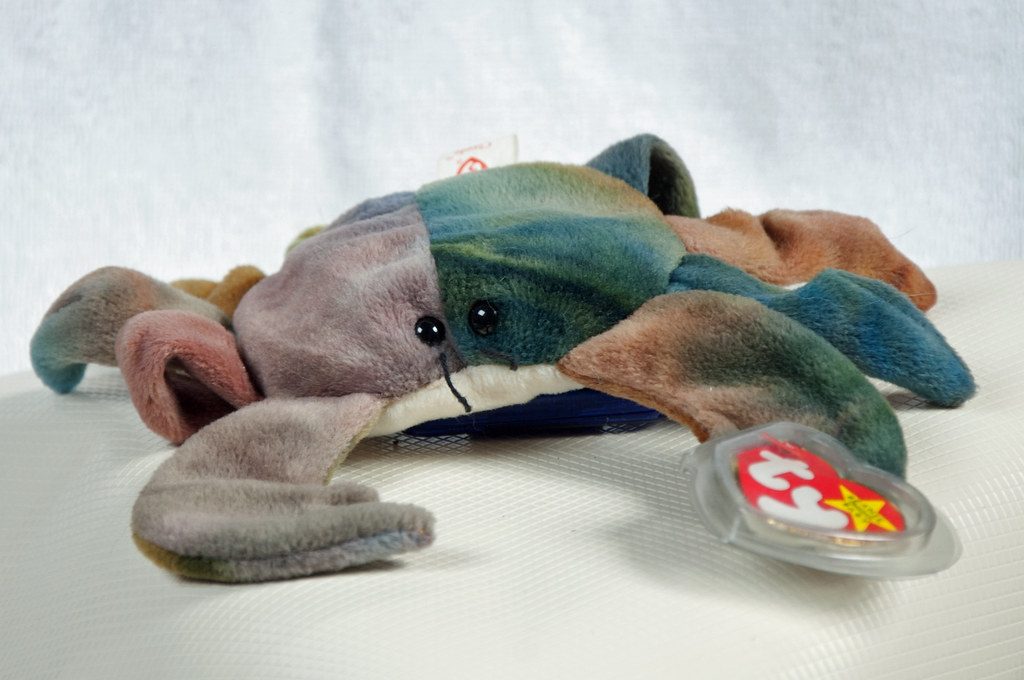 If there’s a discussion for the singular most valuable Beanie Baby, Valentino the Bear just might qualify. Depending on which market Ty created him for, Valentino could have a wide range of errors and defects. A Valentino with every known error sold for a shocking $42,299 on eBay. These errors included PVC pellets, a white star instead of the typical yellow star, a brown nose instead of a black one, a tag with many typos, and much more. Even without these errors, Valentino can still sell for almost $1,000, making him one of the most expensive Beanie Babies out there. 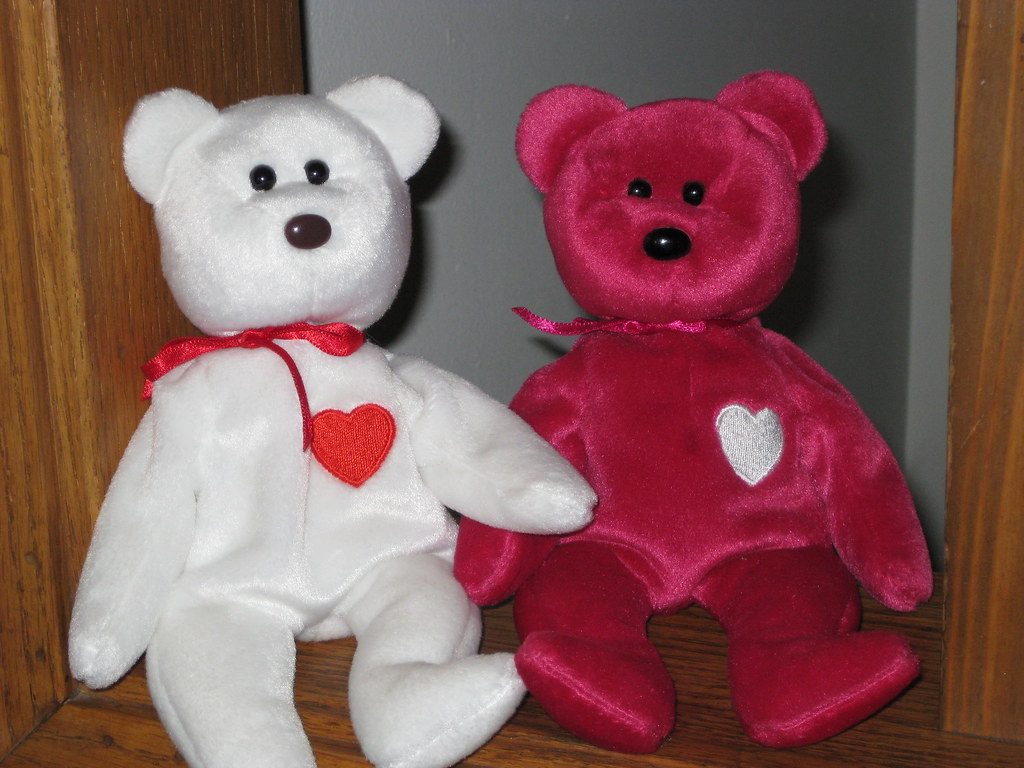 In 1996, Ty produced Lefty the Donkey and Righty the Elephant to celebrate both U.S. political parties. They released new designs for Lefty and Righty in 2000, 2003, and 2008. For the most part, Lefty and Righty weren’t worth much money because of their political nature and wide availability. However, a man brought two 2000 variation Lefty toys when he met Hillary Clinton in 2006. The man had Clinton sign each Lefty for his daughters, making them truly exclusive. Originally, both signed Beanie Babies held a combined value of $50,000. Currently, a single Lefty is available for sale on eBay for $30,000. The sale listing includes newspaper articles of Clinton signing the toys. 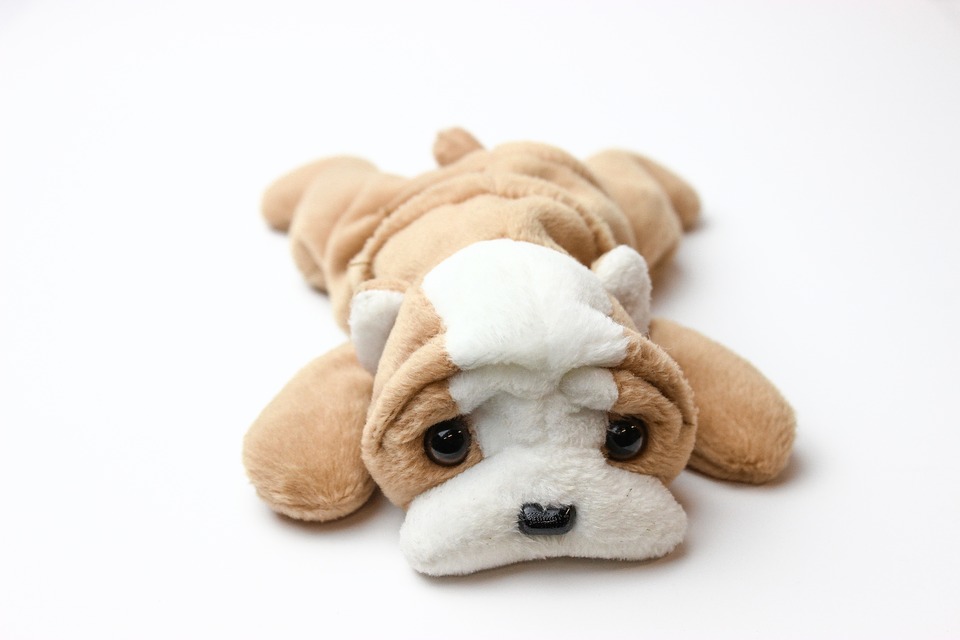 Many of the original nine Beanie Babies carry value because they were only available in small quantities before the hype of Beanie Babies hit their peak. Ty released Patti on January 8th, 1993 with a magenta color. Though different colored variations have come out since Patti’s original debut, the magenta remains the rarest and most valuable. Add in possible errors and defects, and Patti’s value only increases. In fact, some Patti toys have rare Korean four line tush tags. The tag alone can make a standard Beanie Baby carry a worth of almost $2,000. Add in the rarity of a magenta Patti, and it’s easy to see just how expensive they could become. Current sale listings vary from a few thousand dollars to almost $20,000. 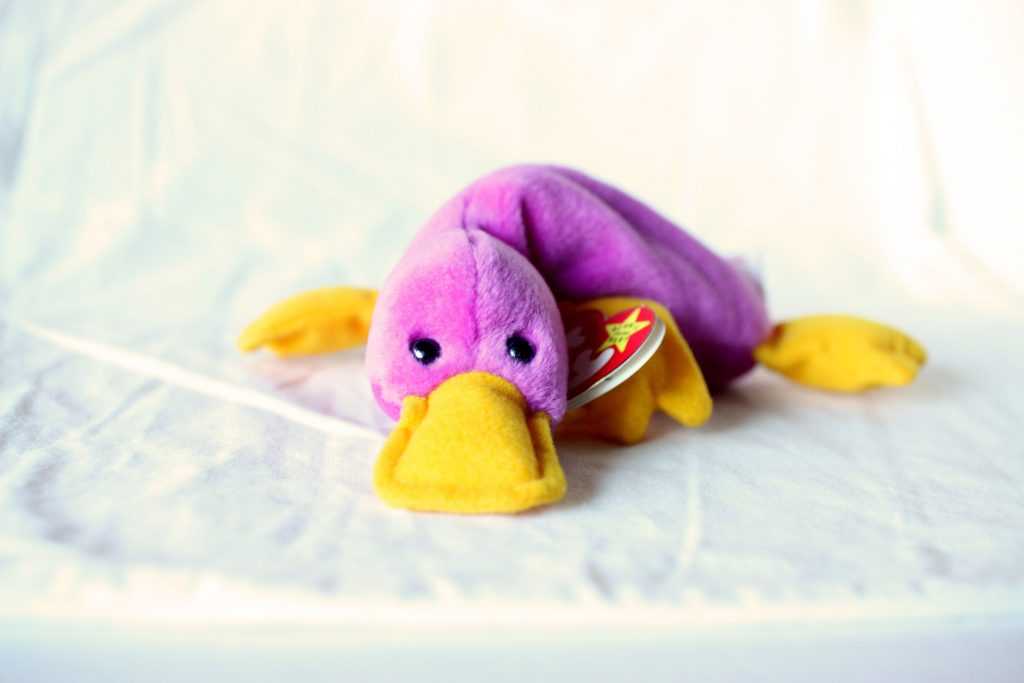 At the height of the Beanie Baby craze, McDonald’s and Ty formed an incredibly successful business collaboration. In the mid-90s, McDonald’s began to include scaled-down Beanie Babies with their Happy Meals. This deal was incredibly popular and, as a result, most of the Happy Meal Beanie Babies are worth very little. However, McDonald’s did have an International Bears collection including bears that represented different countries. Some of these bears are rarer than others, causing them to have a significantly higher value. Bears from Ireland, the U.S., Britain, and Canada can each be worth around $10,000. 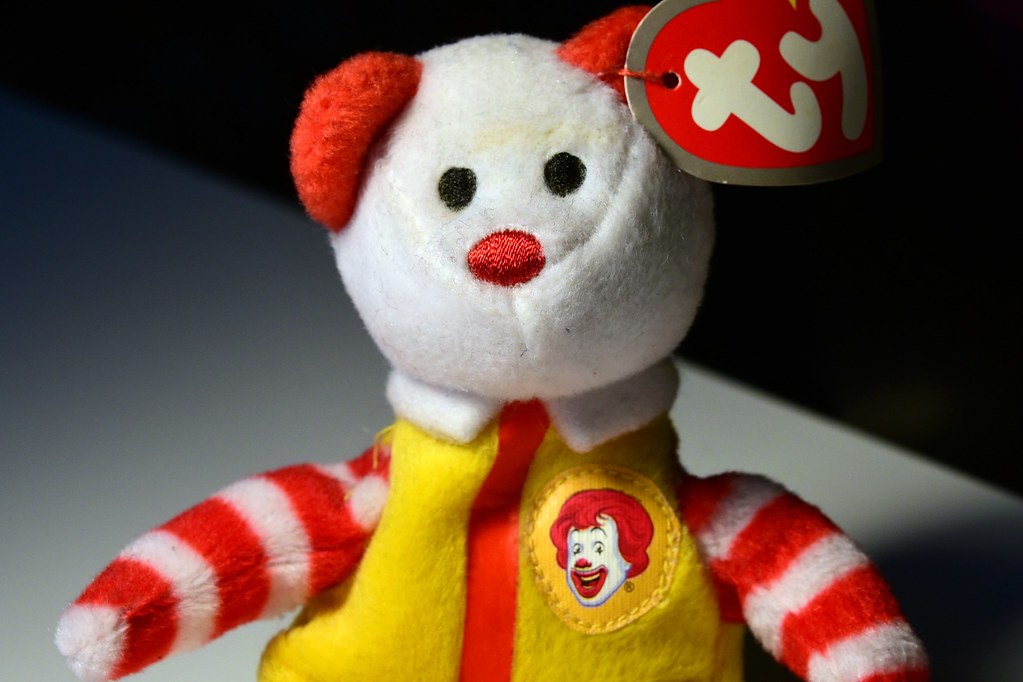 Many different companies paired with Ty to release special edition bears. Surprisingly, even MasterCard wanted special Beanie Babies. Every MasterCard applicant received a special M.C. Beanie if they signed up for the card between 2001 and 2002. Not only was the bear the first Beanie Baby to actually have “Beanie” in its name, but it also has unique defects and extremely limited availability. The version with a brown nose is incredibly rare and is worth several thousand dollars. 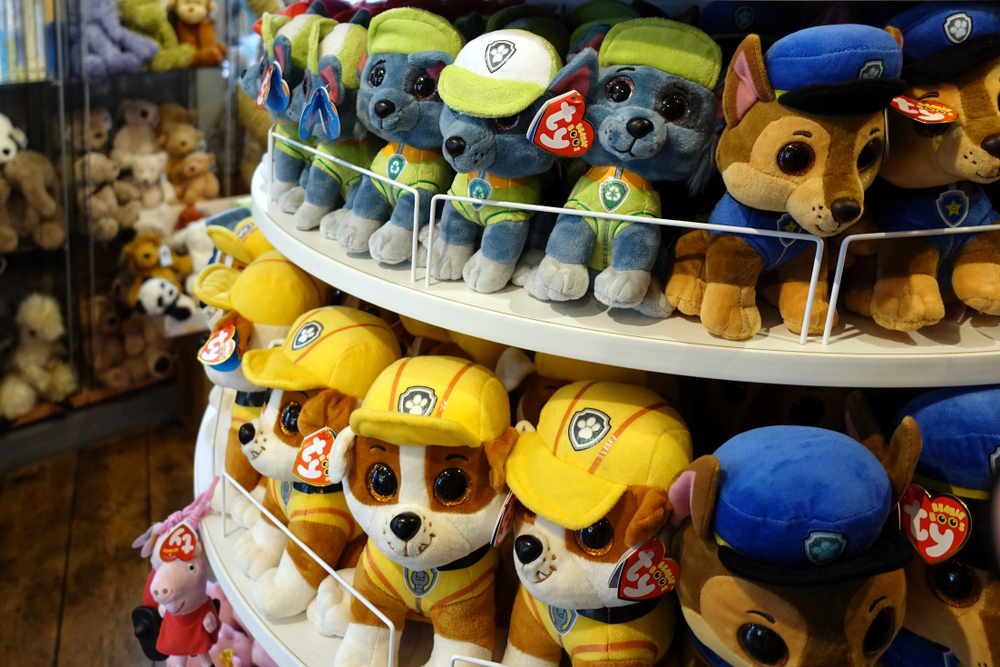 Tabasco and Snort the Red Bulls

Ty originally released its first ever bull Beanie Baby with the name Tabasco. Though the bull had a production cycle lasting a few years, Ty eventually became worried about possible copyright issues and pulled the bull from production. As a replacement, Ty released Snort in 1997. Snort’s production cycle lasted less than a year, making it one of the rarer Beanie Babies. Both bulls are worth a surprising amount, with Tabasco selling for a few thousand dollars in most auctions. However, Snort’s short production cycle boosted its value and one sold for over $6,000 in December of last year. 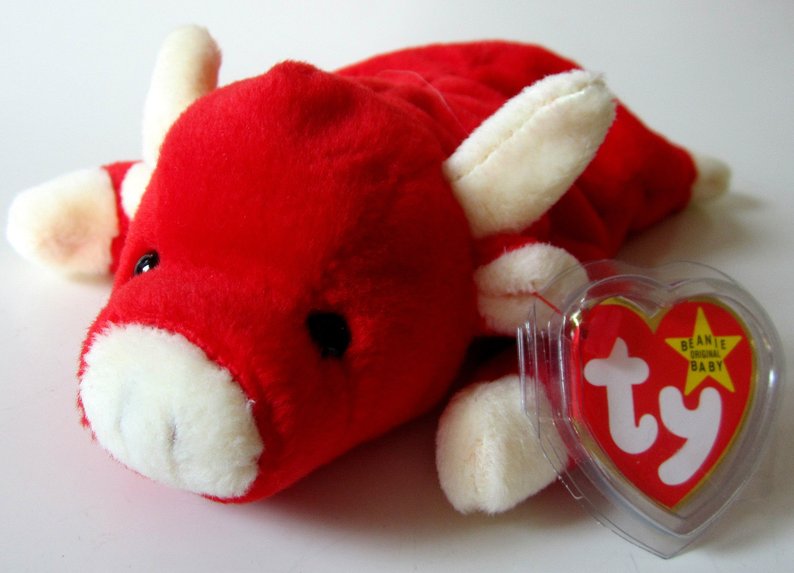