Get to Know the Longest Snakes in the World

Snakes have a dubious reputation that stretches back thousands of years. Their unique way of moving and appearance can trigger awe or ophidiophobia, the fear of snakes. Feared or revered, snakes are fascinating creatures, and the size some species can grow to makes them especially mind-blowing. Most of the largest species are long extinct, but many sizeable snakes continue to slither in many parts of the world.

The carnivorous olive python, Liasis olivaceus, is considered one of Australia’s largest snakes and can grow up to about 13 feet long. It’s a ground-dwelling snake that can be found hiding under rocks and hollow logs near water. Hiding near water is part of the snake's strategy to catch prey who come for a drink, such as rock wallabies. 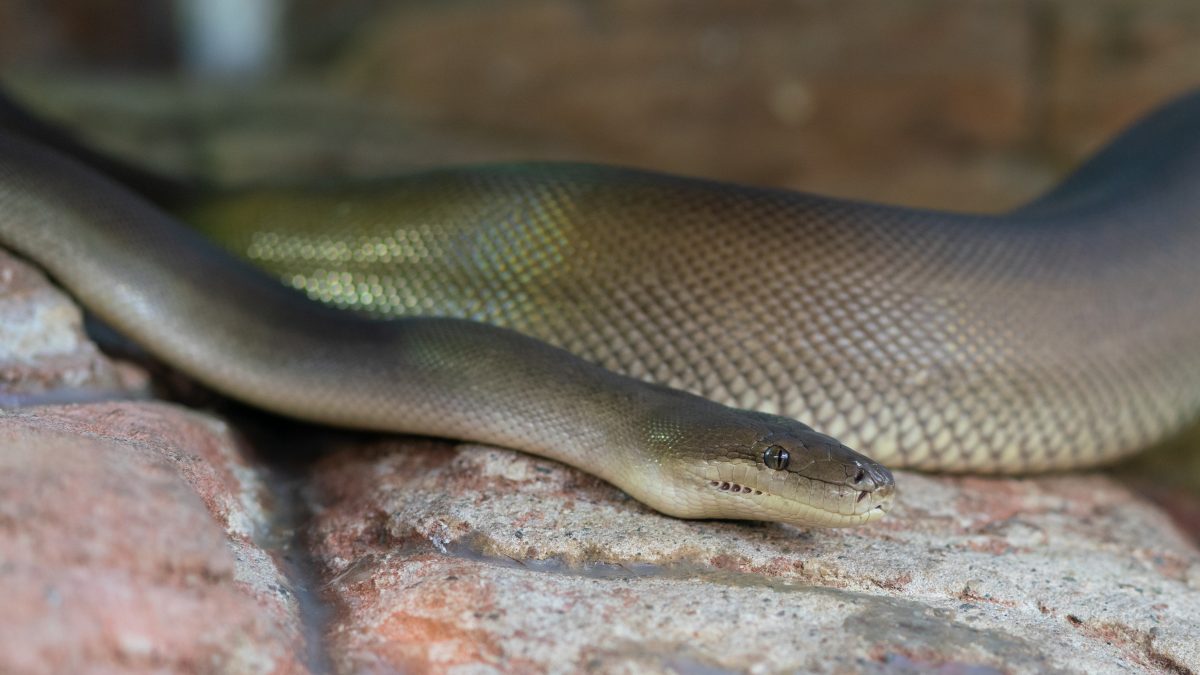 Boa constrictors are stealthy hunters that are native to the tropical regions between Argentina and Mexico. While their average length is about 10 feet, there are reports of boas growing as long as 18 feet. They have triangular, long heads, but their colorations and markings vary depending on their geographical origins. For example, the Peruvian boas have red tail markings, while the Argentine boas have a silvery color. 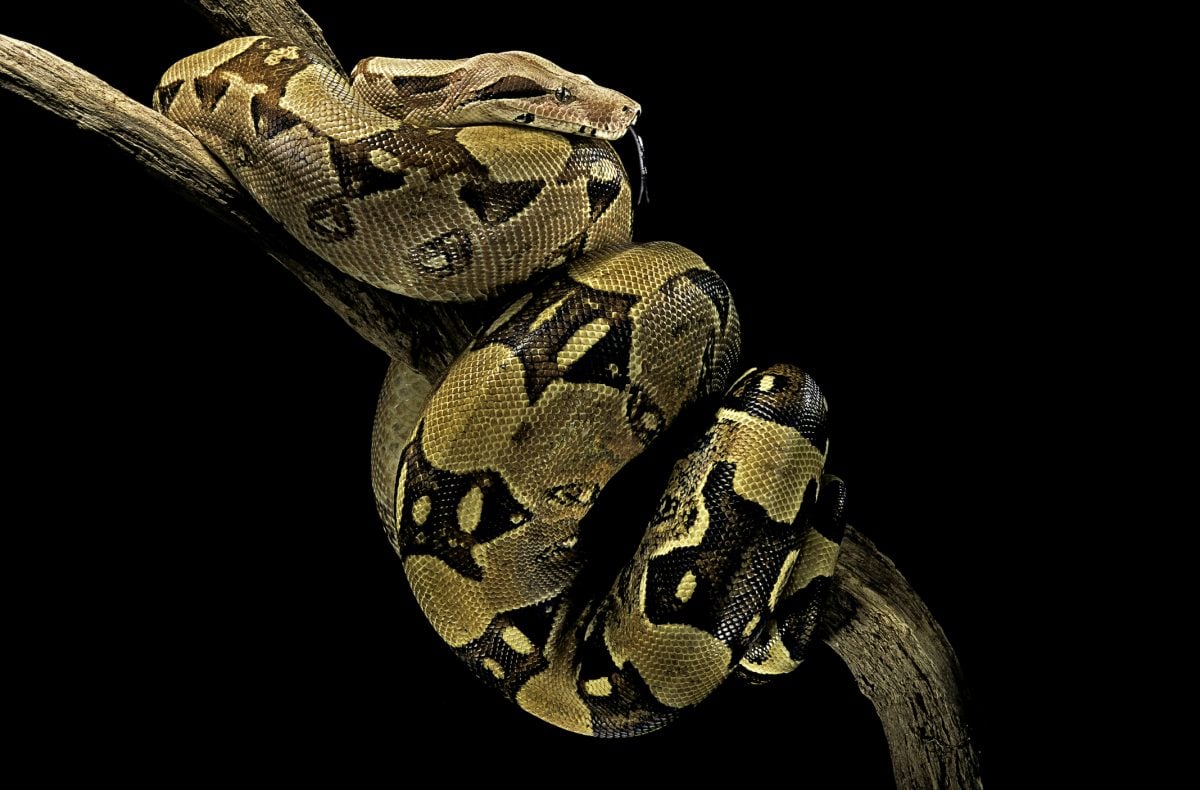 On average, the Indian rock python, Python molurus molurus, grows to about 14 feet, but some have approached the 20-foot range while weighing 200 pounds or more. Distributed throughout the Indus Valley of Pakistan up to Kashmir, the Indian rock python is a nonvenomous constrictor that's unusual in a couple of ways. Not only does it have two rows of teeth that can impart a painful bite, but it also has two lungs instead of the usual one. 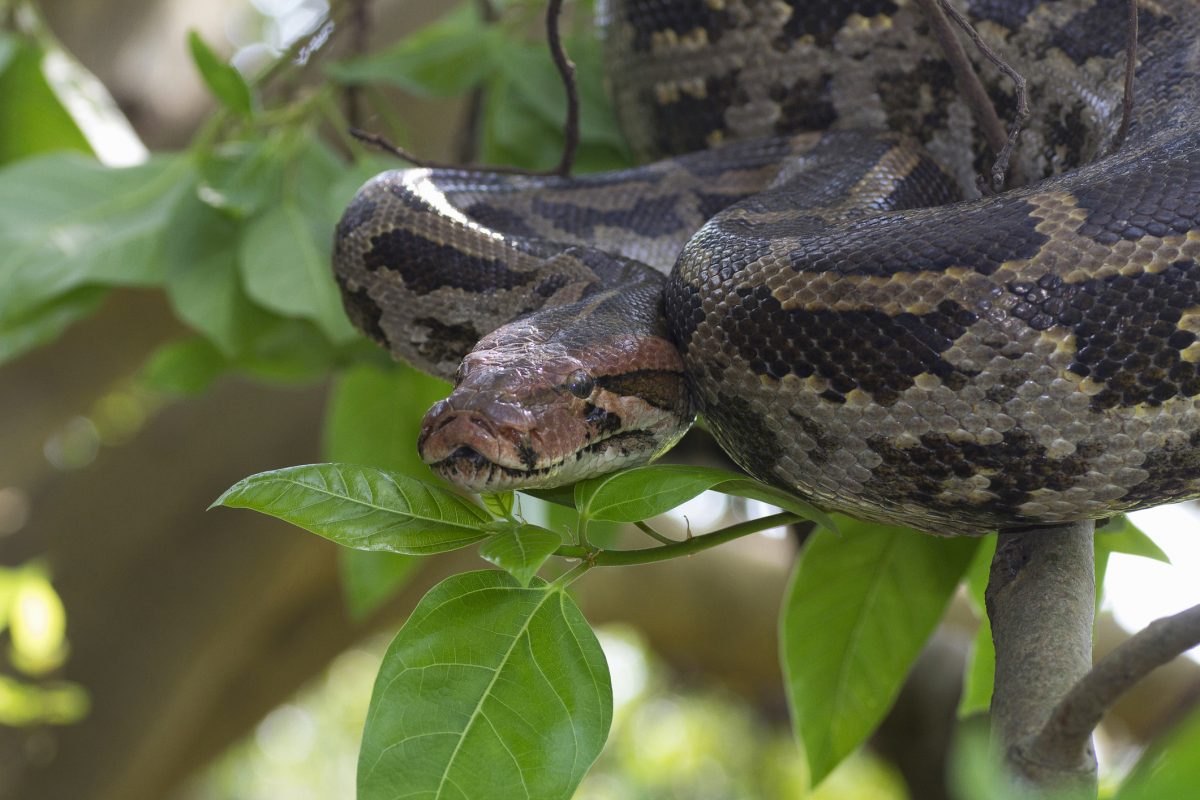 Ophiophagus hannah, King Cobra, is a venomous, carnivorous snake with a deadly reputation. King Cobras can reach up to 18 feet in length, making them the longest venomous snake. While they are shy and tend to avoid humans, when they do strike, their neurotoxic venom is so strong that it can take down an elephant with just one bite. They mainly live in parts of India and China and are sometimes used as entertainment props. 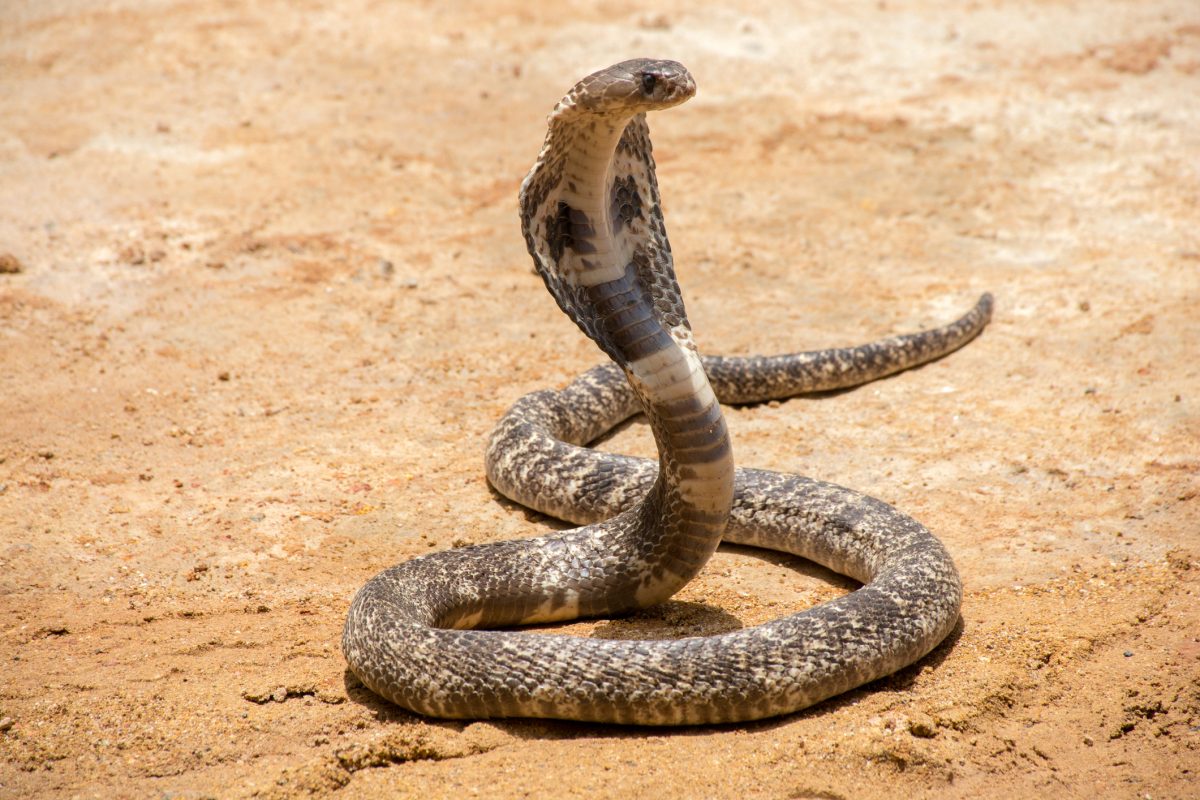 Florida’s Big Cypress Reserve was home to the longest Burmese python ever recorded. This 17-foot female weighed 140 pounds and was carrying over 70 eggs, more than the typical 40 to 50. Burmese pythons, Python molurus bivittatus, are native to the grassy marshes of Asia, such as those in eastern India and Vietnam, and have giraffe-like designs on the back and sides. 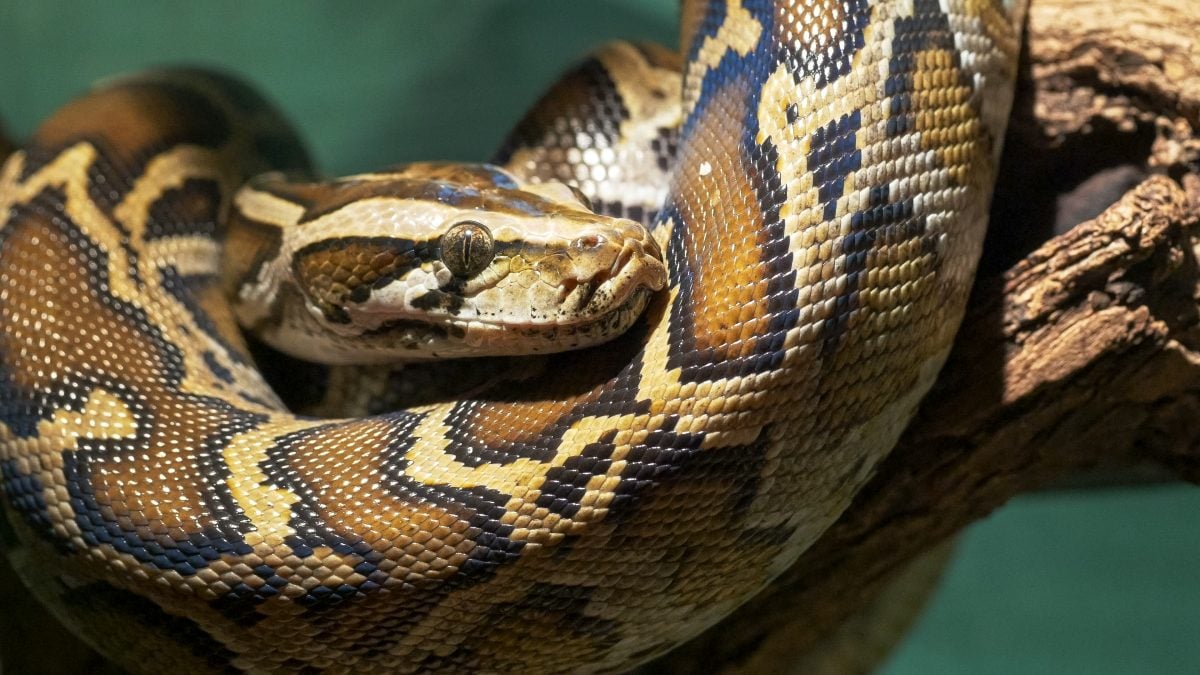 Native to sub-Saharan Africa, the African rock python is the region’s largest snake, measuring approximately 20 feet long. Like many constrictors, it kills through asphyxiation, but it’s also one of the meanest snakes alive. Some observers report that young pythons come out of their eggs striking and can’t be tamed as easily as others. Unfortunately, many people see them as pets, but when they realize these predators don't make the best companions the snakes are unleashed into an unfamiliar and unsuspecting environment. 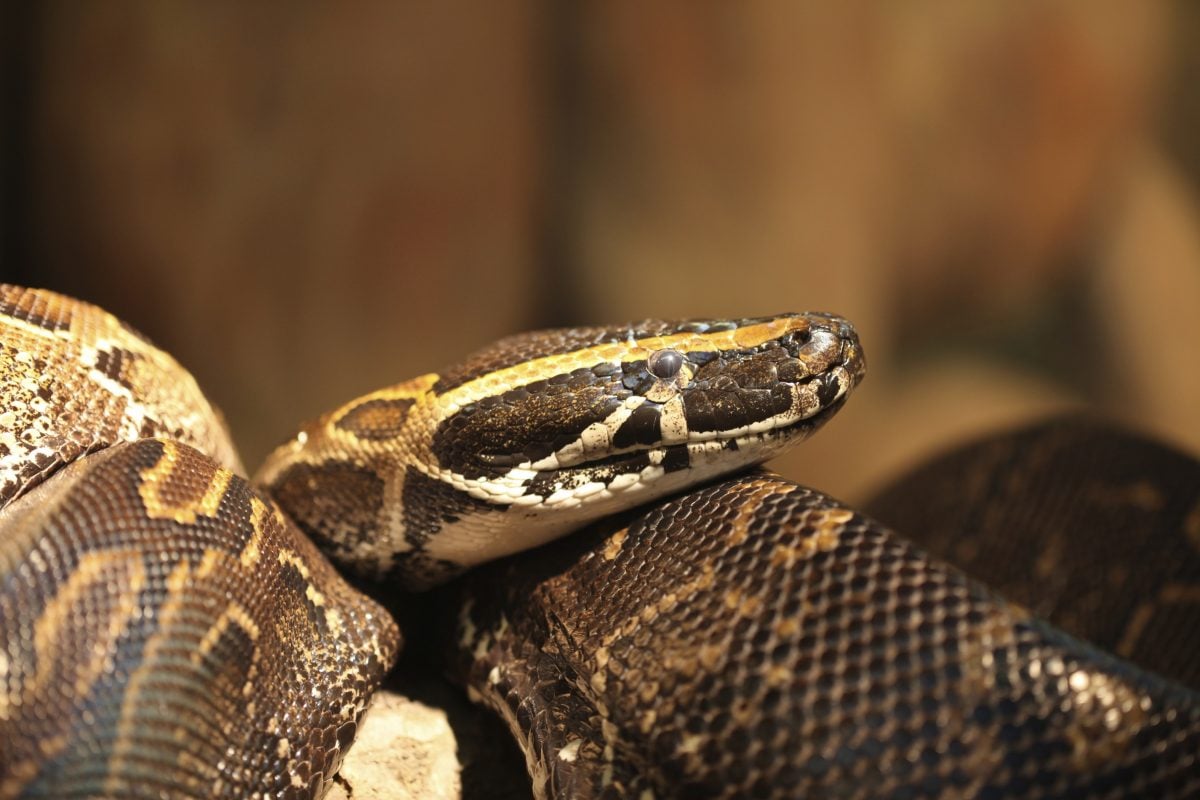 The green anaconda is the largest snake in the world by weight and is typically twice as heavy as the reticulated python, its close cousin. These slow-moving anacondas can grow to be longer than 29 feet and can weigh over 500 pounds. They are found in the Amazon and Orinoco river basins in South America and can eat larger mammals, including jaguars, whole. 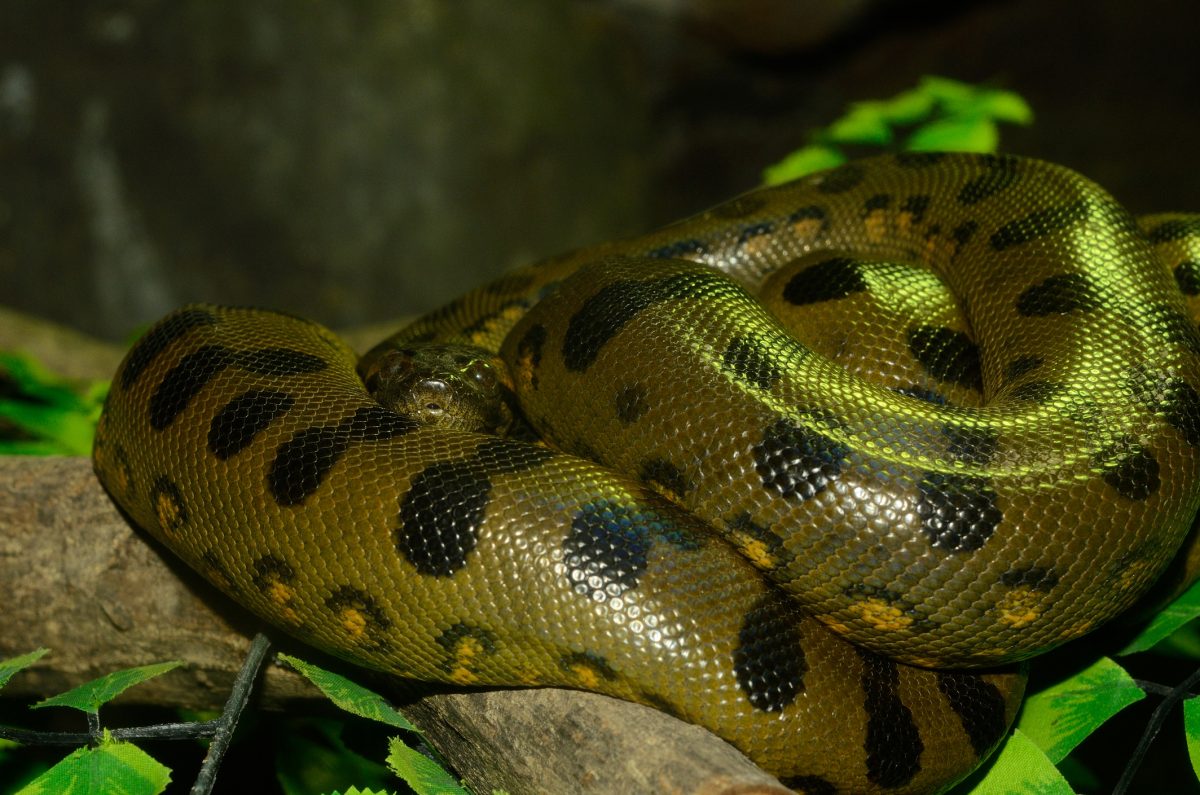 Morelia amethistina amethistina, commonly known as the amethystine python, is a nonvenomous snake native to Indonesia, Australia, and Papua New Guinea. The average size is approximately 16 feet, but the longest recorded was almost 28 feet. They eat birds and smaller mammals, such as bats and possums, which they may have little problem getting because they spend most of their time in trees. They get their name because of their iridescent scales, which achieve a purple-blue shimmer despite the snake's dull yellowish-green coloring. 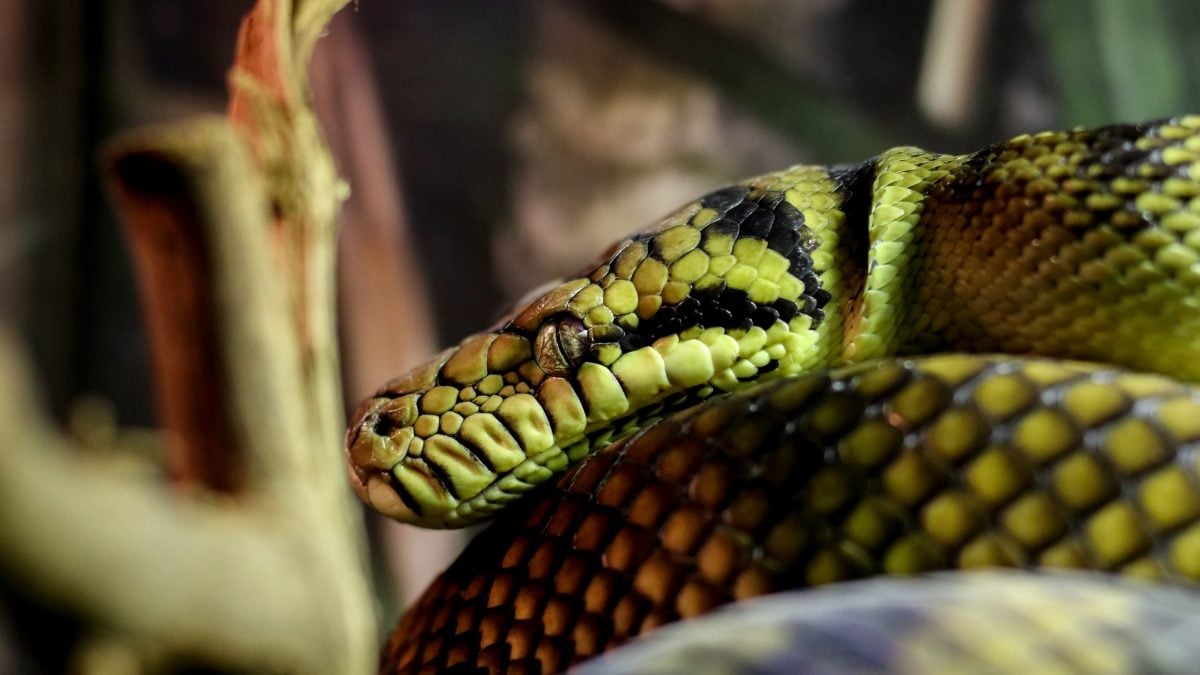 The reticulated python, Malayopython reticulatus, loves the steamy tropical rainforests of Southeast Asia, like those in the Nicobar Islands, the Philippines, and Borneo. The longest python ever recorded was in 1991 and clocked in at 32 feet 9.5 inches. Interestingly, another reticulated python named Medusa holds the record as the longest in captivity, measuring 25 feet 2 inches. These carnivorous snakes feed on birds and larger mammals, such as deer and dogs. Unlike other species, females grow larger than males. 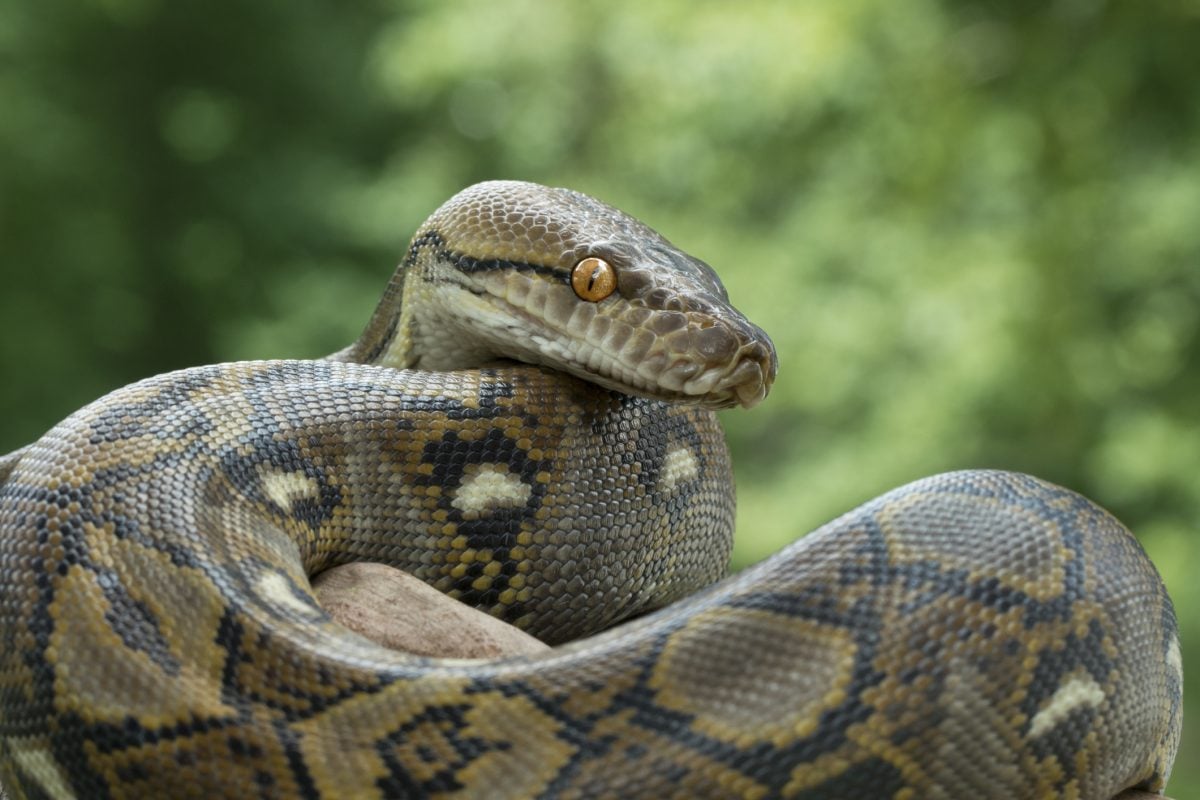 Weighing more than a ton, Titanoboa cerrejonensis, known simply as Titanoboa, was a giant prehistoric serpent that's considered the biggest snake in the world. Researchers estimate that it was between 42 and 49 feet long, which is at least twice as long as some existing today. This monster had lots of teeth, which probably helped it chew animals with tougher hides, such as crocodiles. Titanoboa's lower jaw extended behind its brain, meaning it could open its mouth widely for much larger dinosaur prey.