Forgotten Cars of the 1950s: the Domestic Boom and Import First Wave

Many of Detroit's diverse car creations of the 1950s persist in our memories. There are others, however, which fell out of view over the years and didn't receive the recognition that they deserve.  One thing that all these models have in common: they have all enjoyed the wide-open spaces and driving opportunities of the USA. Whether cruising mightily down Main street or getting economical gas mileage as important compact commuter cars for the postwar generations. 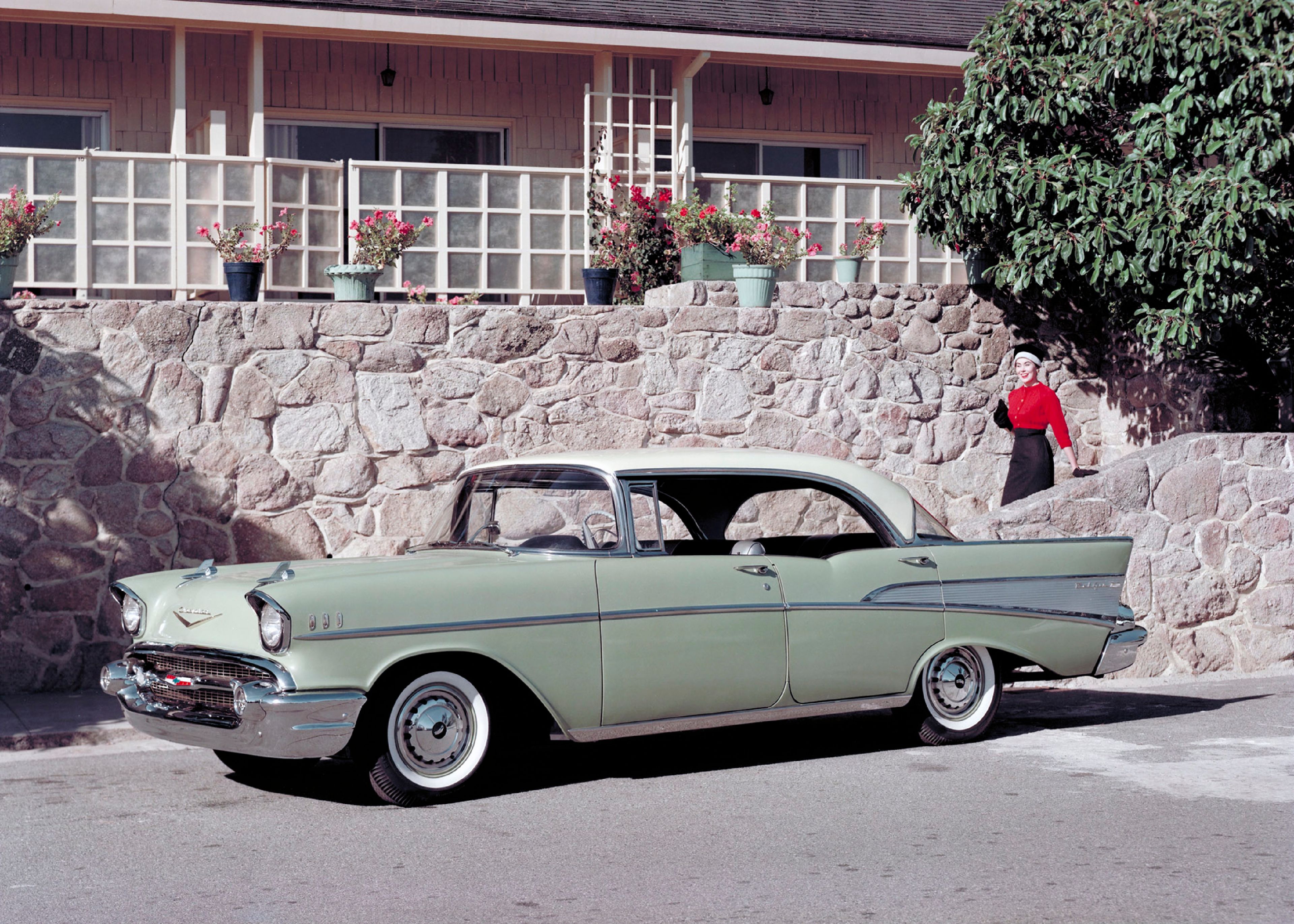 Post-war American optimism accelerated into the 1950s, and the Buick Roadmaster Skylark gave drivers the stylish top-down, V-8 power cruising opportunity that they craved. It cost a lot — $5,000 — but sold a lot as well. The popular Roadmaster evolved to so-called sports car size and styling, as Buick was presenting it to the American public. 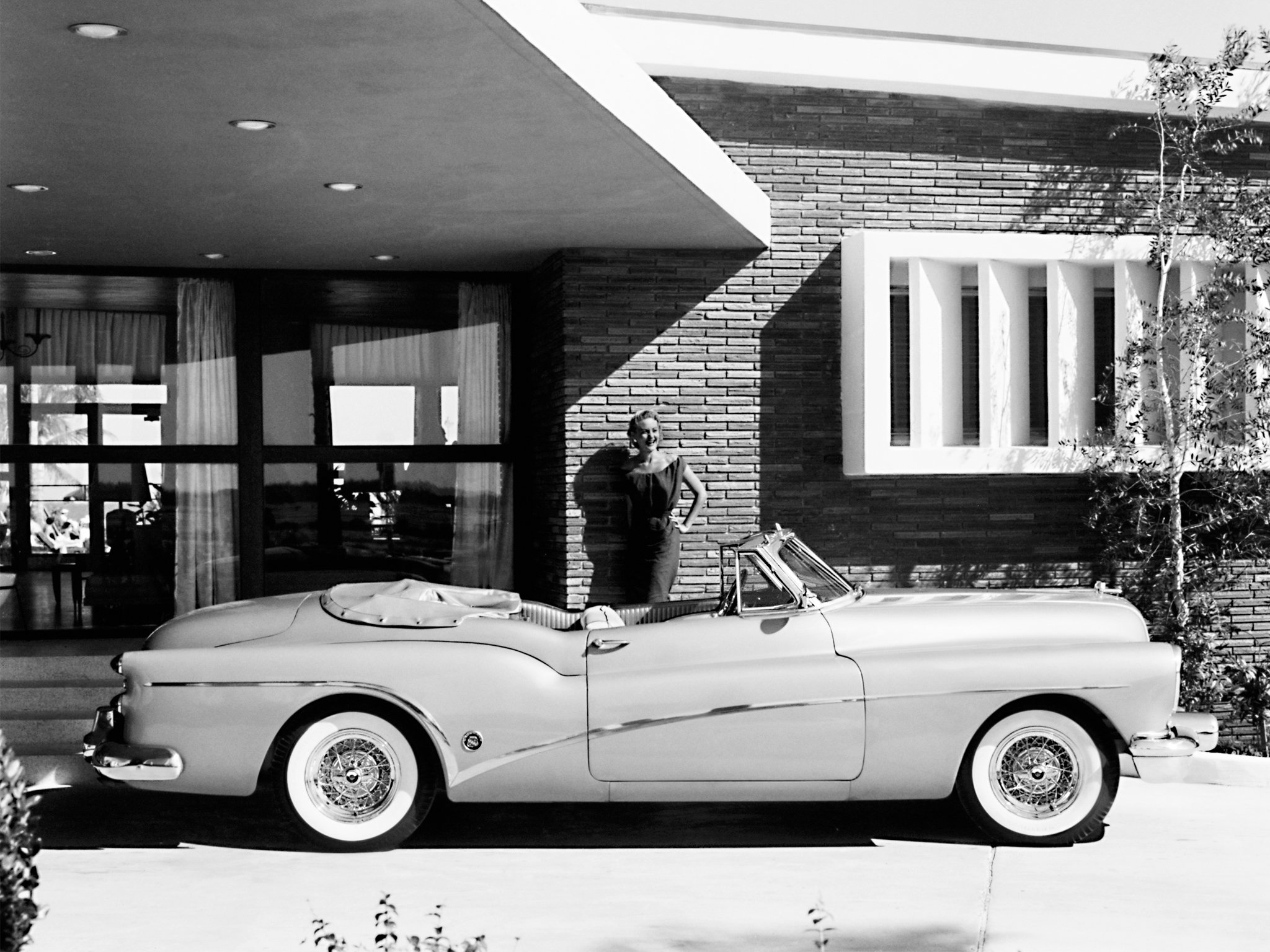 Star of the pop song "Beep Beep" by the Playmates, the Nash Rambler had a peppy engine and cute styling. Still, it did have a disadvantage in competing with other Detroit products both in reputation and practical production considerations because of its Wisconsin origin. Over the years, the Rambler name persisted over several makes, including AMC. 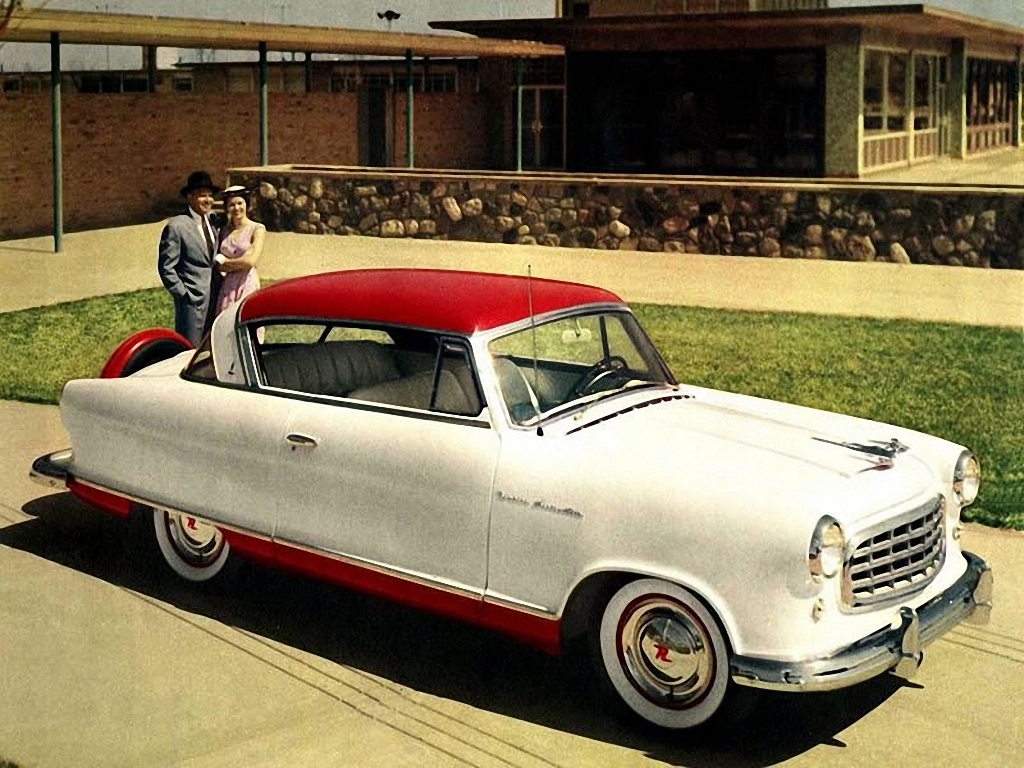 Chrysler's traditional top-of-the-line model starting in the 1920s, and by 1955 it had been separated from the Chrysler brand and designated as its own make in an attempt to create a competitor to the Cadillac and Lincoln names. It was Chrysler's showpiece, and one claim to fame for the Imperial was the introduction of an all-transistor radio option, the world's first. 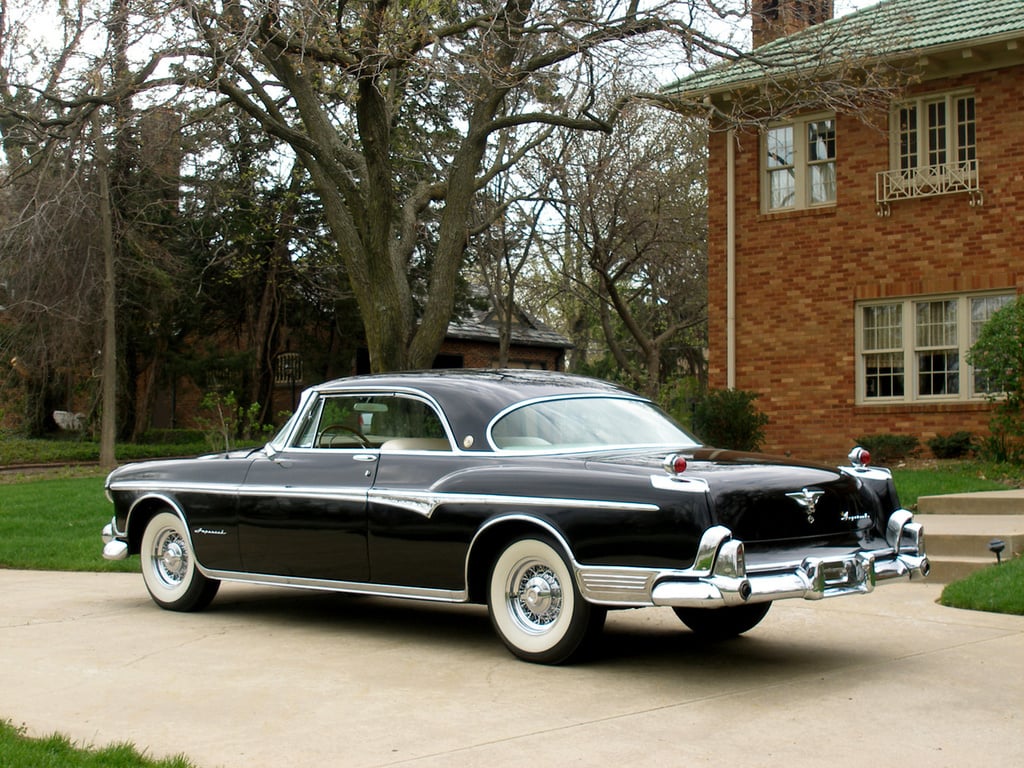 An impressive 225 inches long, the 1959 Cadillac Coupe DeVille was the start of the sixth generation of this luxury line. It was derived from an early car design of the same name, in which the chauffeur sat separately in the front exposed to the weather while the occupants enjoyed a luxurious protected space. Everyone sat inside by this point in time, but in a car that stretched from the huge engine compartment and spacious front and rear seating to the enormous fins trailing behind. 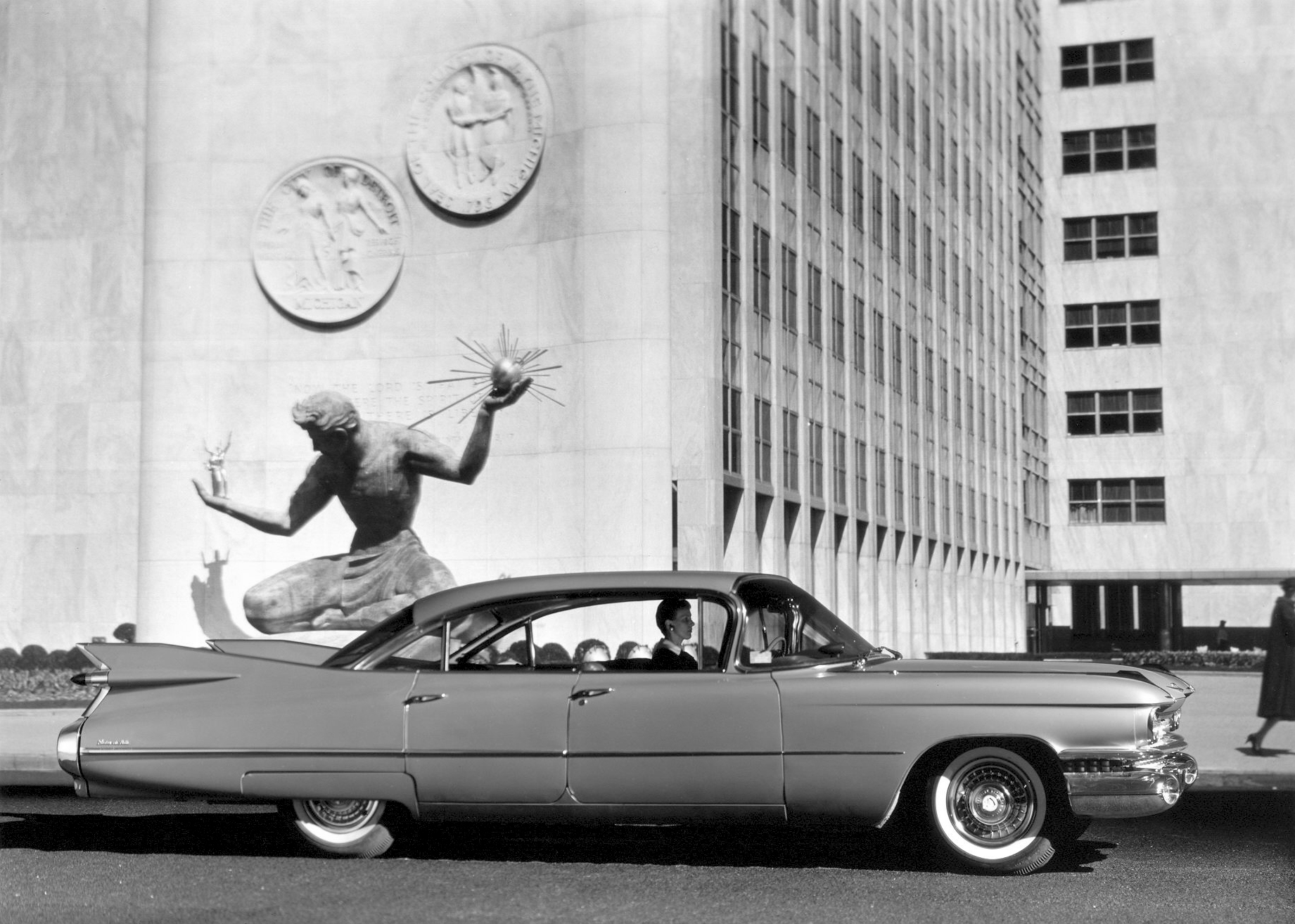 The refreshed Studebaker design going into the 1950s created a buzz among car buyers, which energized this Indiana company. The Starlight raised some eyebrows, though, with design features that are more in keeping with our modern times than the 1950s style. An aviation-inspired panoramic 4-pane rear window inspired the Starlight name. 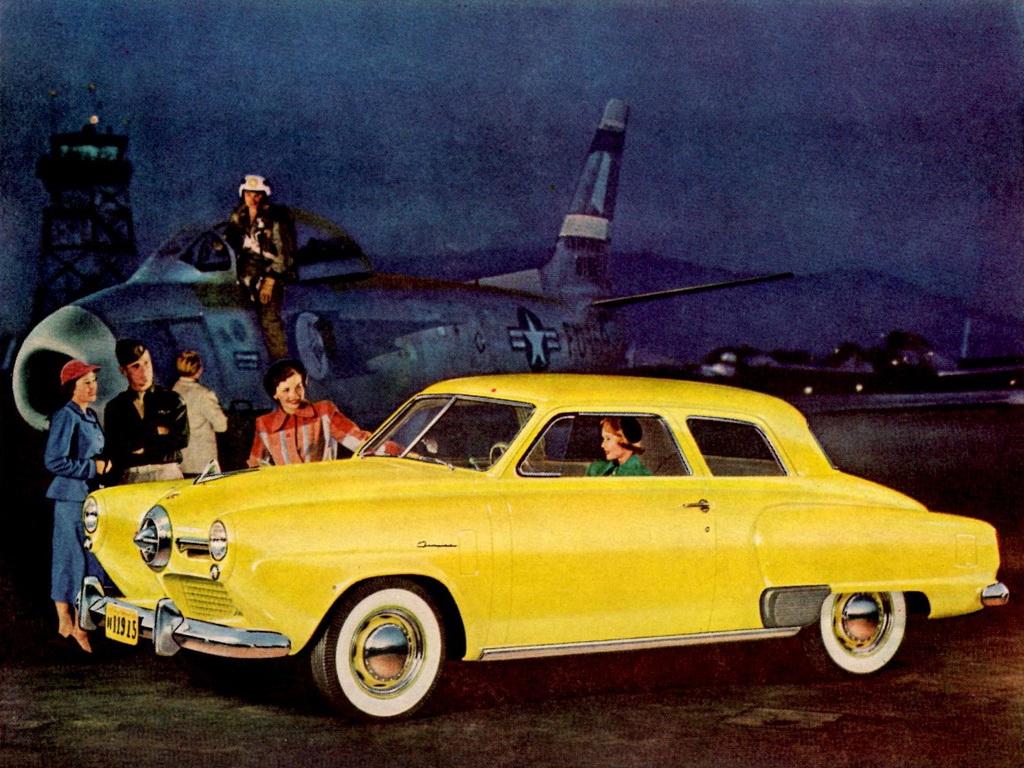 With an optional 361 cubic inch V-8 offering 300 hp, the 1959 Firedome Sportsman had a top speed of 115 mph and an extensive selection of colors and two-tone finishes to pick from. Unfortunately, both the declining economy and some production issues in previous years led to 1959 being the last year for the Firedome. In a way, it lived on, as the 361 engine design became the basis for several later classic Chrysler engines from the 383 to the 440. 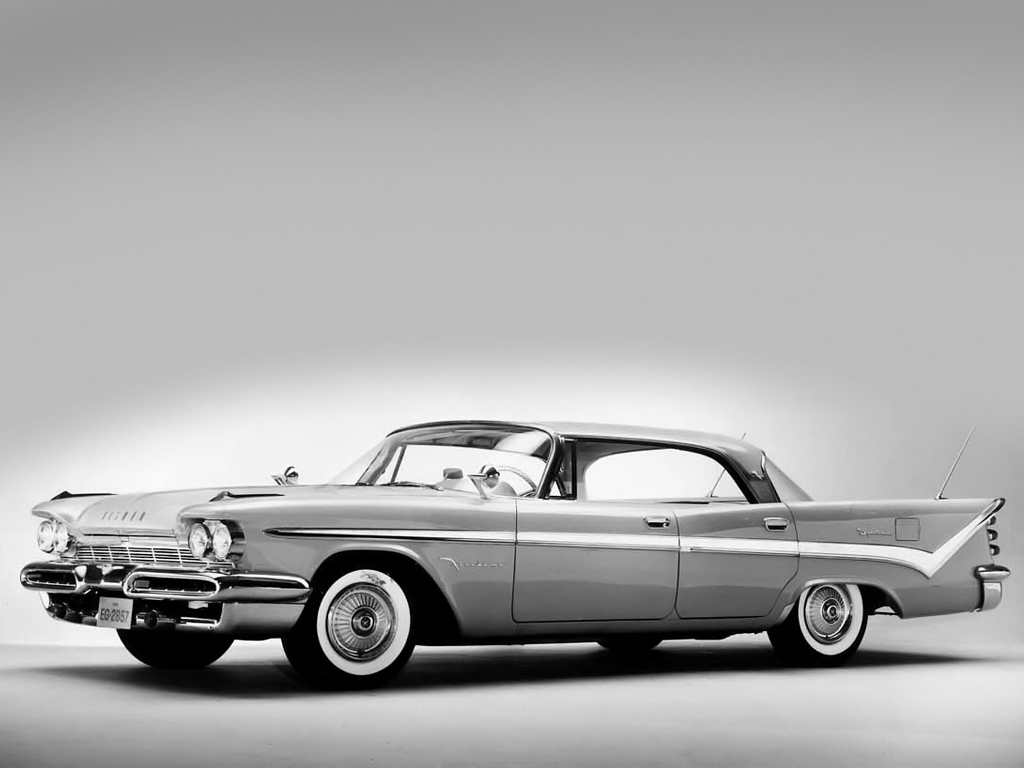 In 1950 the Newport was a two-door hardtop also listed as the New Yorker Special Club coupe. The choice of multiple colors of cloth upholstery gave it an edge in 1950, and a padded dash was available as well. A "shiftless" Prestomatic transmission allowed automatic-style convenience when cruising at higher speeds. 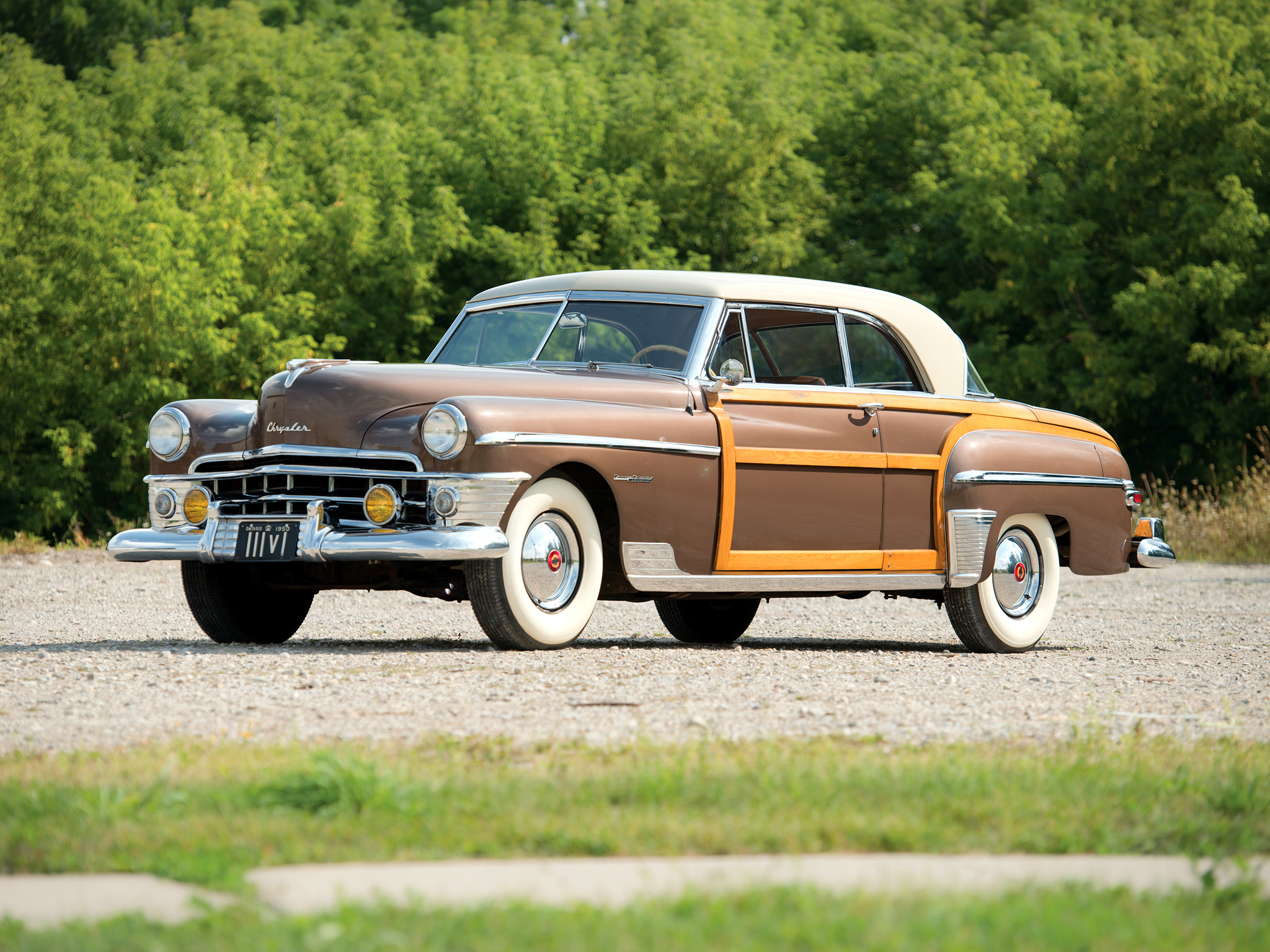 Chrysler adorned their postwar wagon with one last year of "woodie" paneling along with a luxurious interior and the Prestomatic semiautomatic 4-speed transmission. The name continued on Chrysler station wagons until the late 1980s then resumed on minivans starting in 1990. 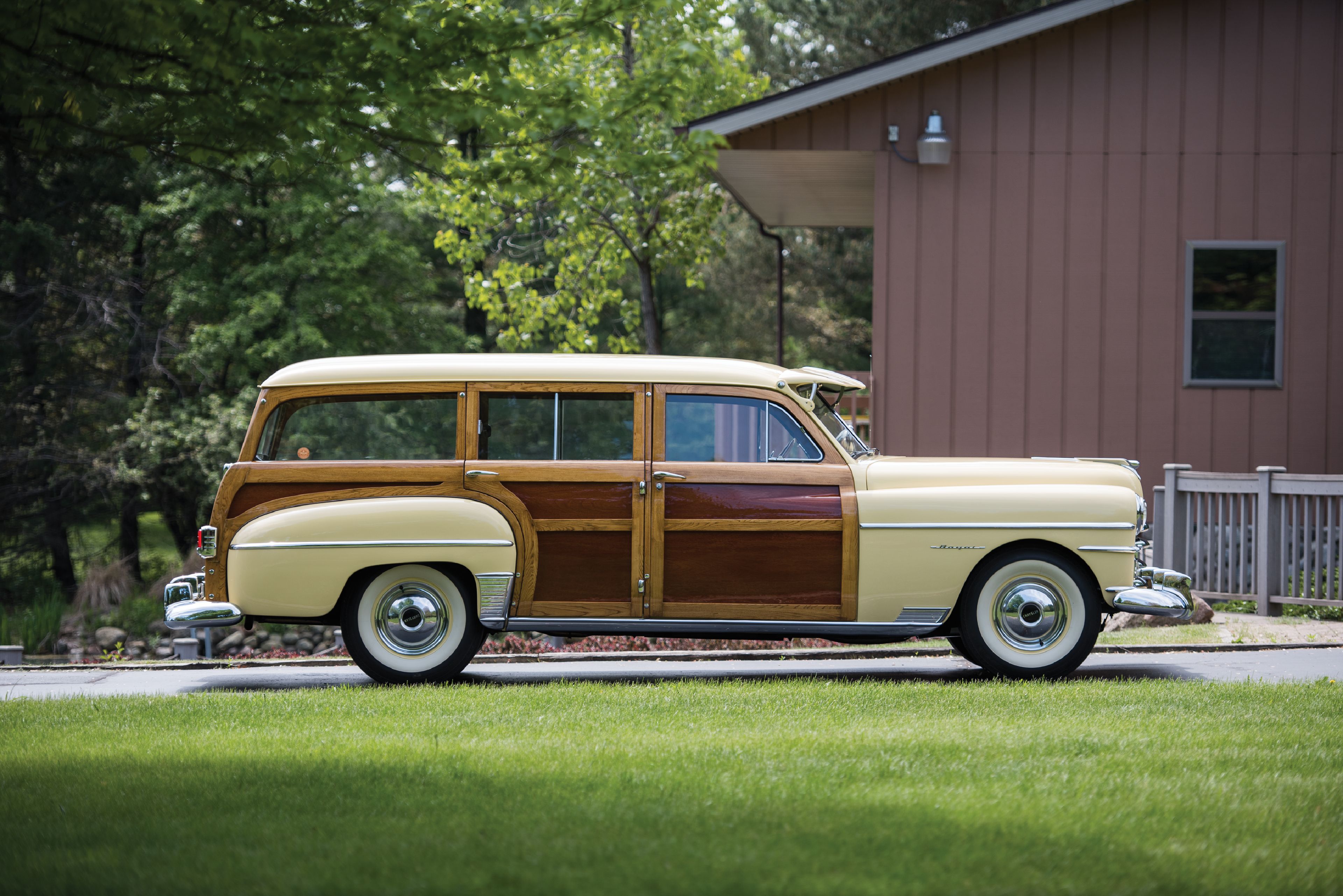 A rare product of Chrysler's fine-tuning features and designs among the Newport, Saratoga, New Yorker, and New Yorker de Luxe models during the early 1950s, this model also featured power steering and the company's new Hemi engine. The production run was only about 1100 cars for this and the previous year. 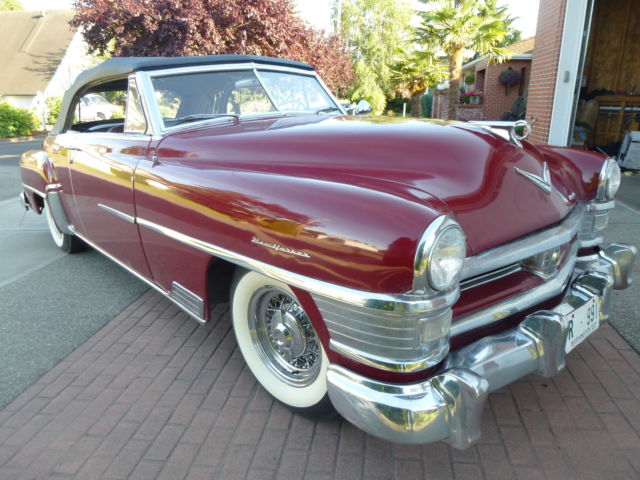 Most people react to this front-entry BMW with "what is that?" It's not your typical Beemer, a microcar of Italian design with a front-entry door and bubble-style windows, similar to Peel and Messerschmitt models with a bubble car style, and not far off from the AMC Pacer. The modern Smart cars are similar in a lot of ways. The single-cylinder engine achieved 78 miles per gallon. 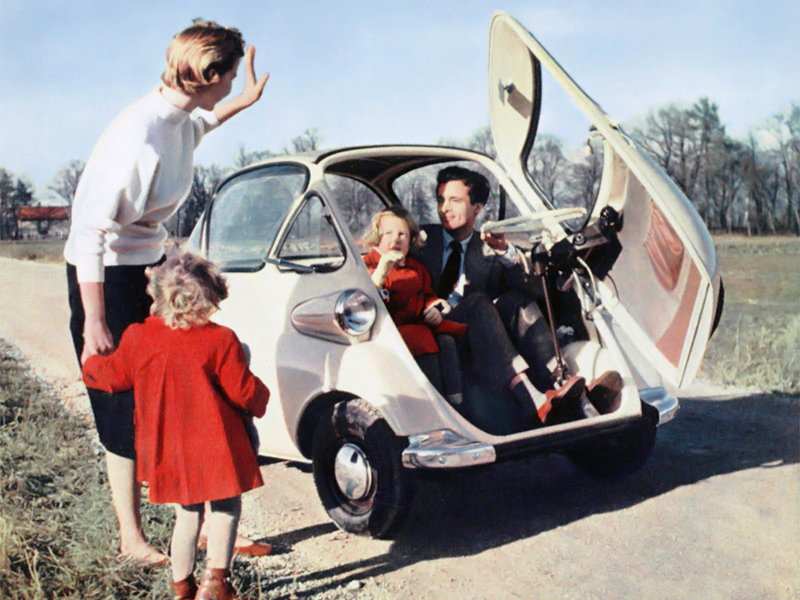 Toyota's first foray into the American car market. Not everyone wanted land yachts with tailfins and tons of steel, but Toyota didn't capture the compact car market with their first try. Introduced under the make "Toyopet," it especially met the needs of growing postwar American families in the 1950s, which needed a more affordable second car, competing with a large number of European brands. 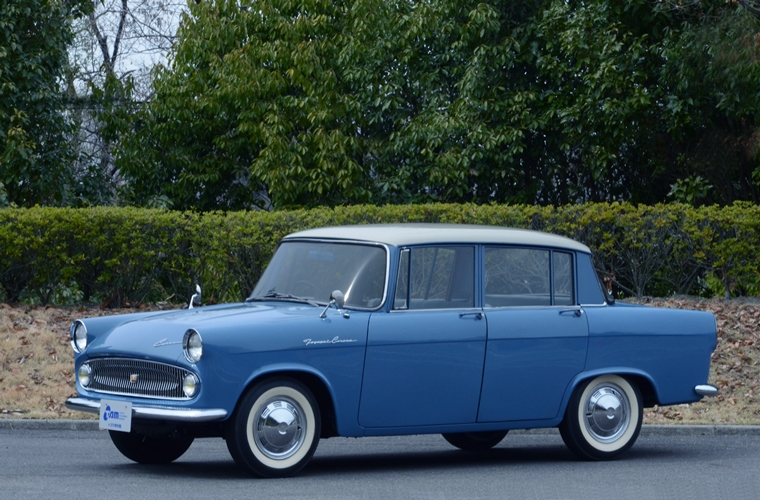 Mercedes made a strong transition from luxurious but practical cars to what was to be a large portion of its future market: sporty models with dazzling design features. The W198 model entered the USA market in the 1950s and, in 1999, was voted the "sports car of the century." It introduced mechanical direct fuel injection to the production car market in the USA, and with the increased power offered a top speed of 163 mph from a 3-liter straight-six engine. 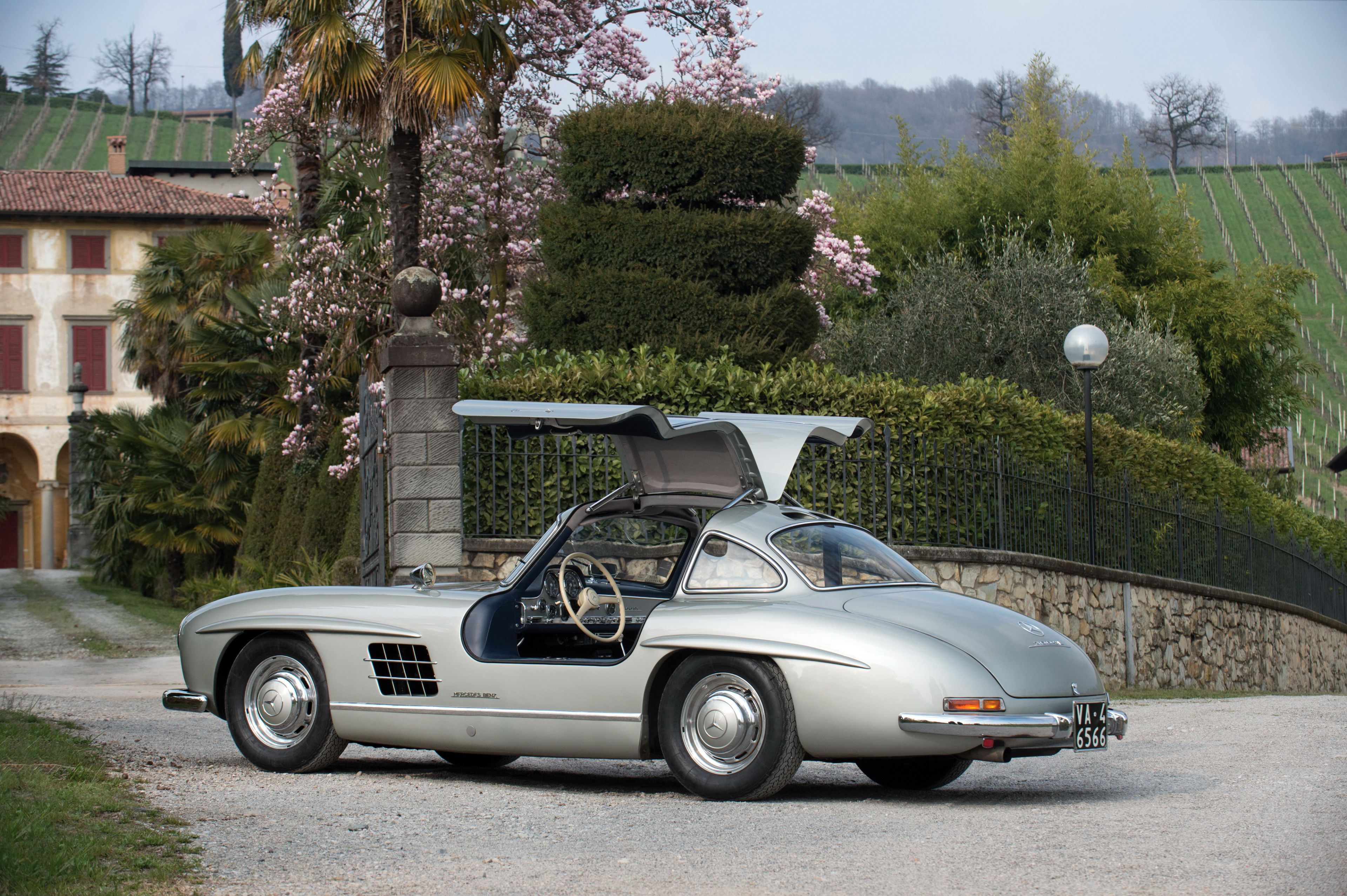 The last year of Jaguar's sensational sports car, which had its debut in 1948. The 120 in the model number reflected the top speed of 120 mph, and the model excelled in 24-hour endurance runs, rallying, and racing. Both standard and performance modded versions were available in the USA. 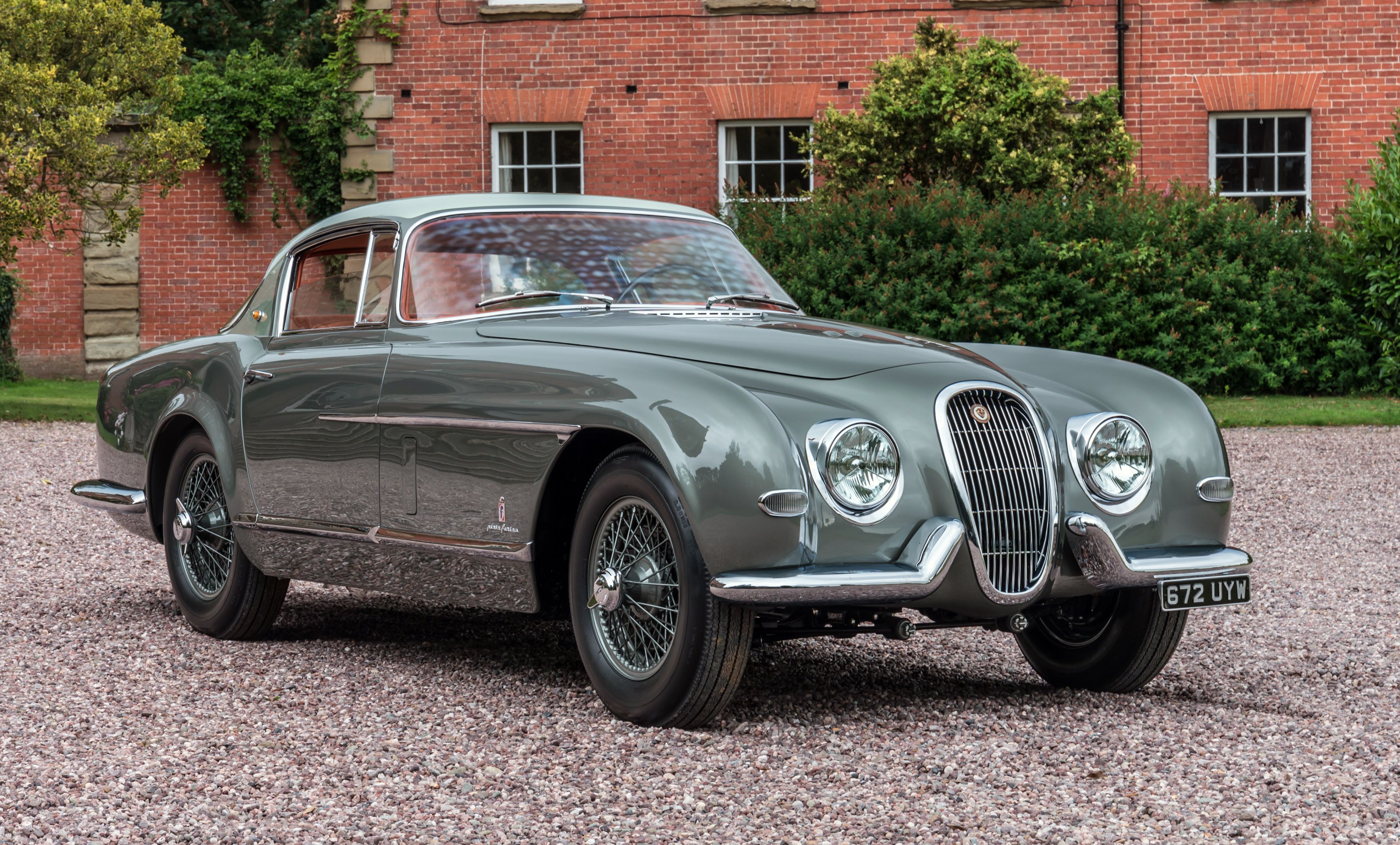 Porsche's first USA-export, brought by the importer who previously introduced the highly successful VW Beetle and other VW products. The 356 was a close relative to the Beetle in many ways, and its engine could be easily installed to add some extra pep to the popular people's car, though it wasn't designed to handle that kind of horsepower. 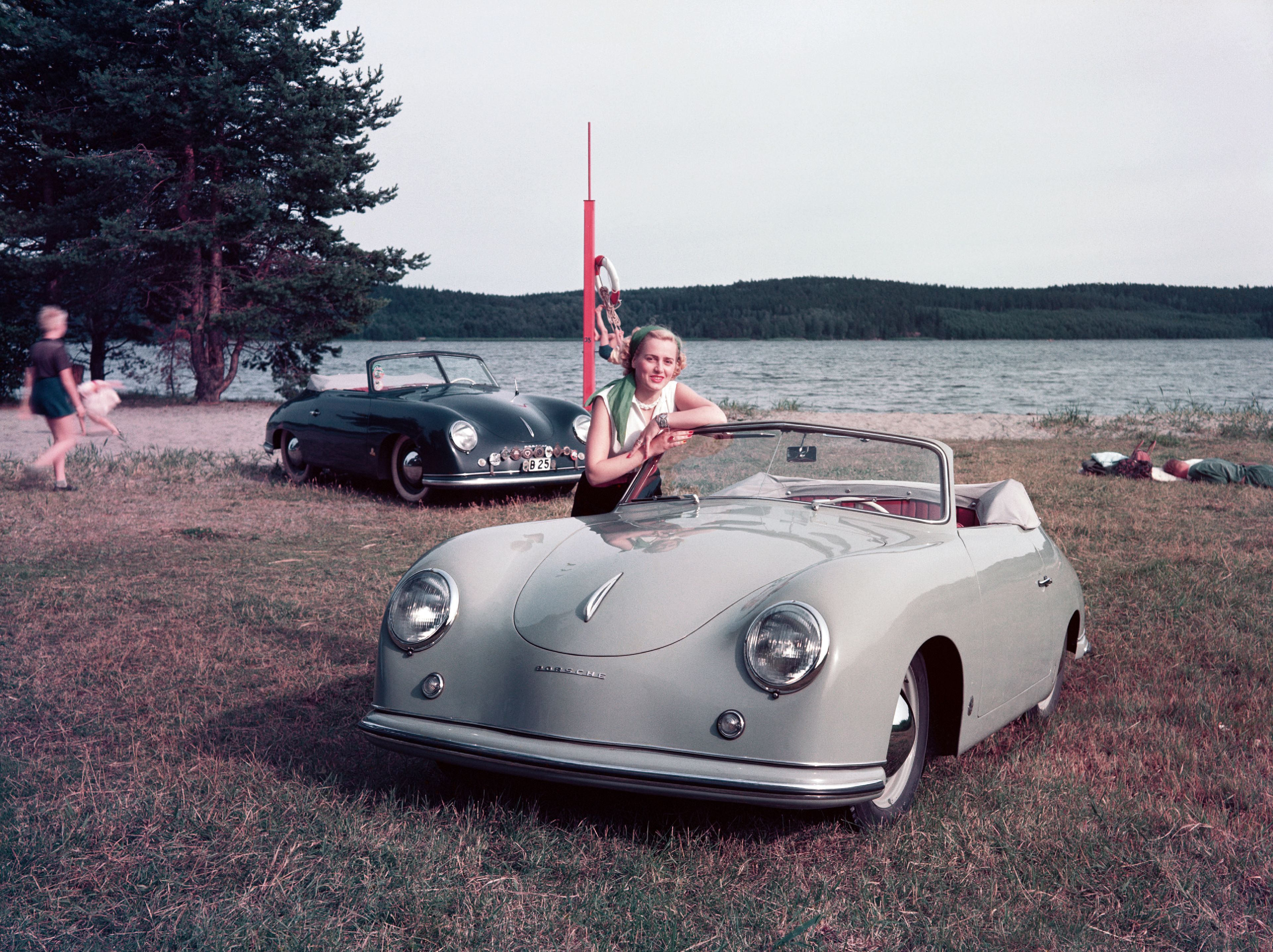 Part of an array of British sports cars available in the USA during the 1950s and 1960s such as those from Triumph and MG, the Sunbeam Alpine was known for its instant success on Alpine rallies and other motoring events, an appearance in the Hitchcock film To Catch a Thief, and, among others, the James Bond film Dr. No. 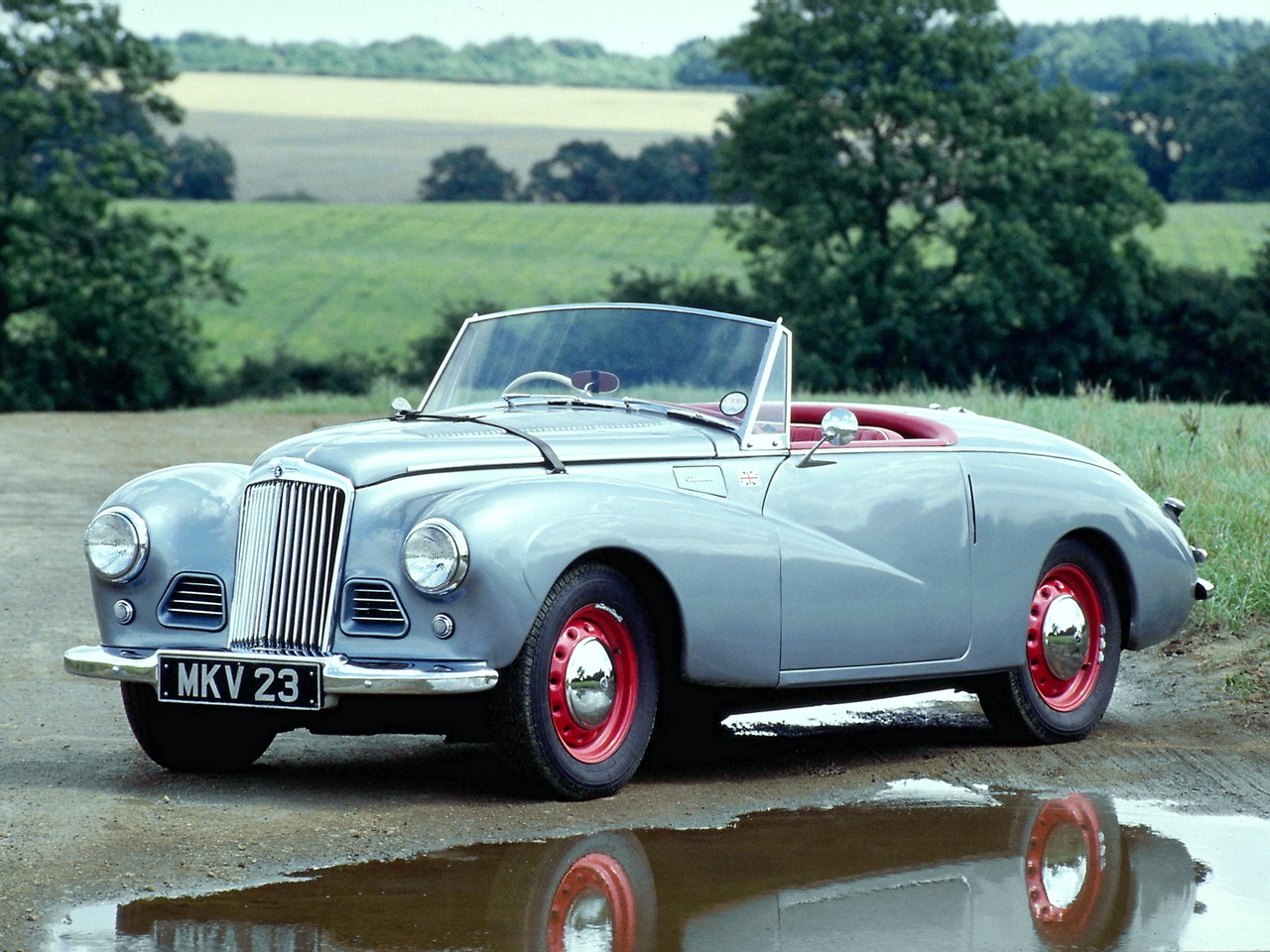 An early French export to the USA, which was very popular in France, the Renault Dauphine was an attractive compact car at the time, but with important shortcomings. American owners discovered that the radically varying climates of the United States revealed design and material weaknesses, which made its success in the States short-lived. 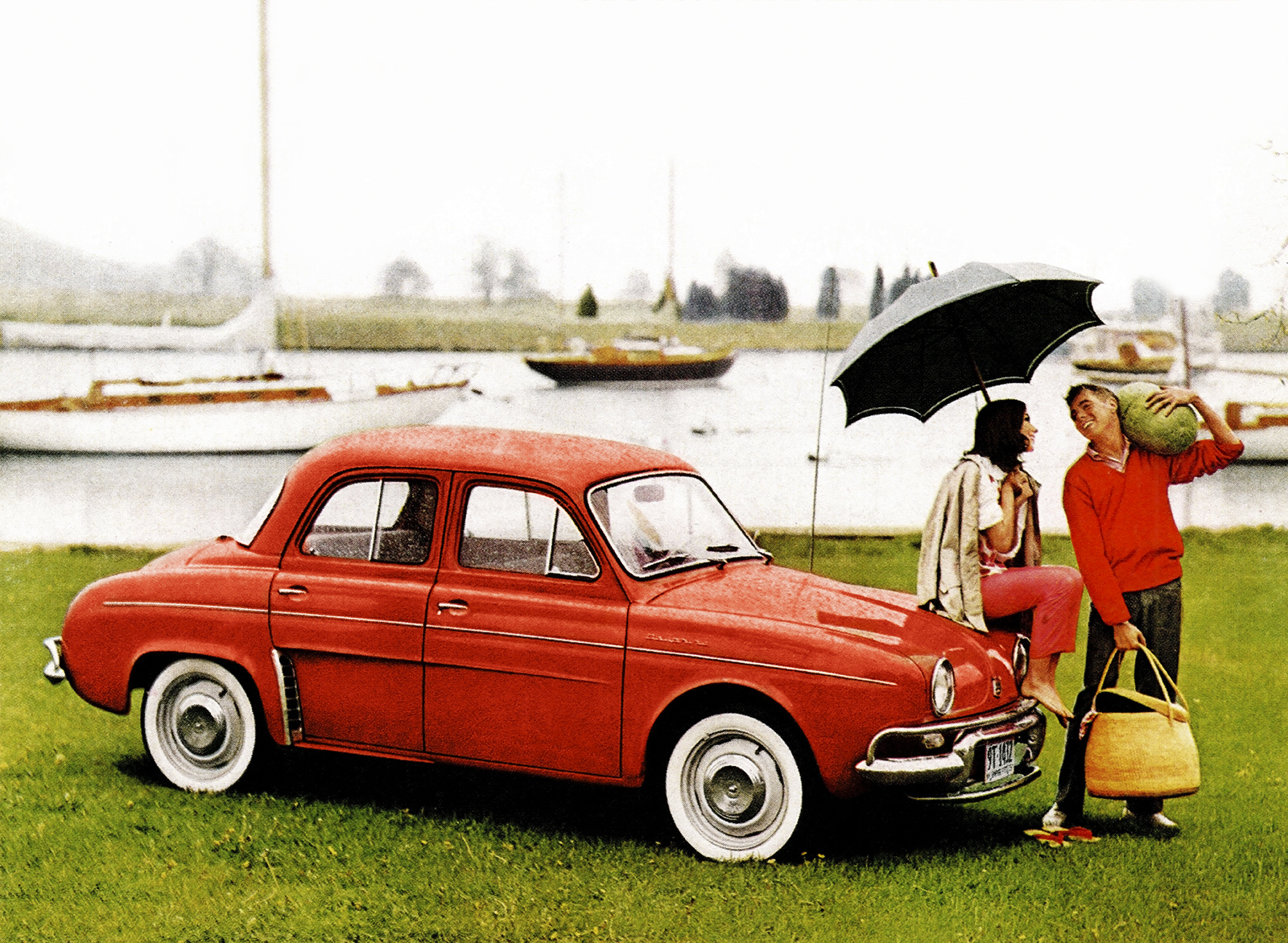