Classic Hair Styles from "Friends" Prove the 90s Live On

From the mid-90s to the early aughts, no on-screen narrative captivated as many loyal viewers as David Crane and Mara Kauffman's Friends. This laugh-track comedy detailed the lives and iconic styles of a blunder-prone clique of anti-social socialites living in New York's West Village. Although the show ended more than a decade ago, its availability on streaming sites and evergreen influence on pop culture are inspiring a whole new generation to fall in love with Ross, Rachel, Phoebe, Chandler, Monica, and Joey.

Beyond the quippy dialogues and charming coffee meetups, Friends acts as a comprehensive scrapbook of '90s culture — enormous landline phones, silky button-ups, cringe-inducing lingo, and, of course, amazing hairstyles. This quintessential up-dos, blow-outs, and feathered fringes are a throwback to a different era — a time long before Netflix and iPhones, when missing an episode of your favorite sitcom was the worst thing that could happen on a Thursday night.

While some things are better left in the past, in the world of hair and fashion, what goes around always seems to come back around. This signature Monica look — half updo, velvet scrunchie, expertly feathered fringe — has been steadily going around since the early 90s. The modern adaptation features bangs that aren't so sparse, but the velvet scrunchie remains.

From crimps to curls to renaissance braids, Lisa Kudrow's character certainly sports the most intriguing hairstyles throughout the 236-episode series. These double French braid pigtails are more romantic than they are playful — aptly representing the softer side of Phoebe's multifaceted personality. In the front, two bouncy strands of fringe spiral to her cheekbones. This is an excellent, subtle way to frame the face without drawing much attention away from the wavy plaits.

This 1995 masterpiece look was so phenomenal it gained its own cult following The Rachel. Walk into any hair salon in America, and the stylist will know just what you're after if you name-drop Aniston's sitcom persona. Textured, voluminous layers swoop dramatically around her face while not-so-subtle highlights add depth and dimension. The cut is similar to a shag, but styling 'The Rachel' requires daily dedication to teasing, curling, and root lifting.

Monica may not have been the sexy or eccentric one, but her aesthetic was the perfect representation of normal 90s girls. Like most 20 or 30-something-year-old women during the decade, Monica knew not to underestimate the power of a decorated barrette in leveling up an otherwise basic hair day. Though her chin-length, chunky bob was a short-lived style, it established her as a more down-to-earth, relatable character than her flighty cohorts.

The final seasons of Ross

Is it hair gel or a week of not showering and an excellent hairbrush? Ross grew out his classic short cut in favor of a wilder, spiky style several times throughout the show, but this one takes the crown. The bad-boy length and effortless styling cleverly contrasted his geeky on-screen mannerisms and gave viewers the impression that he was, indeed, growing up. 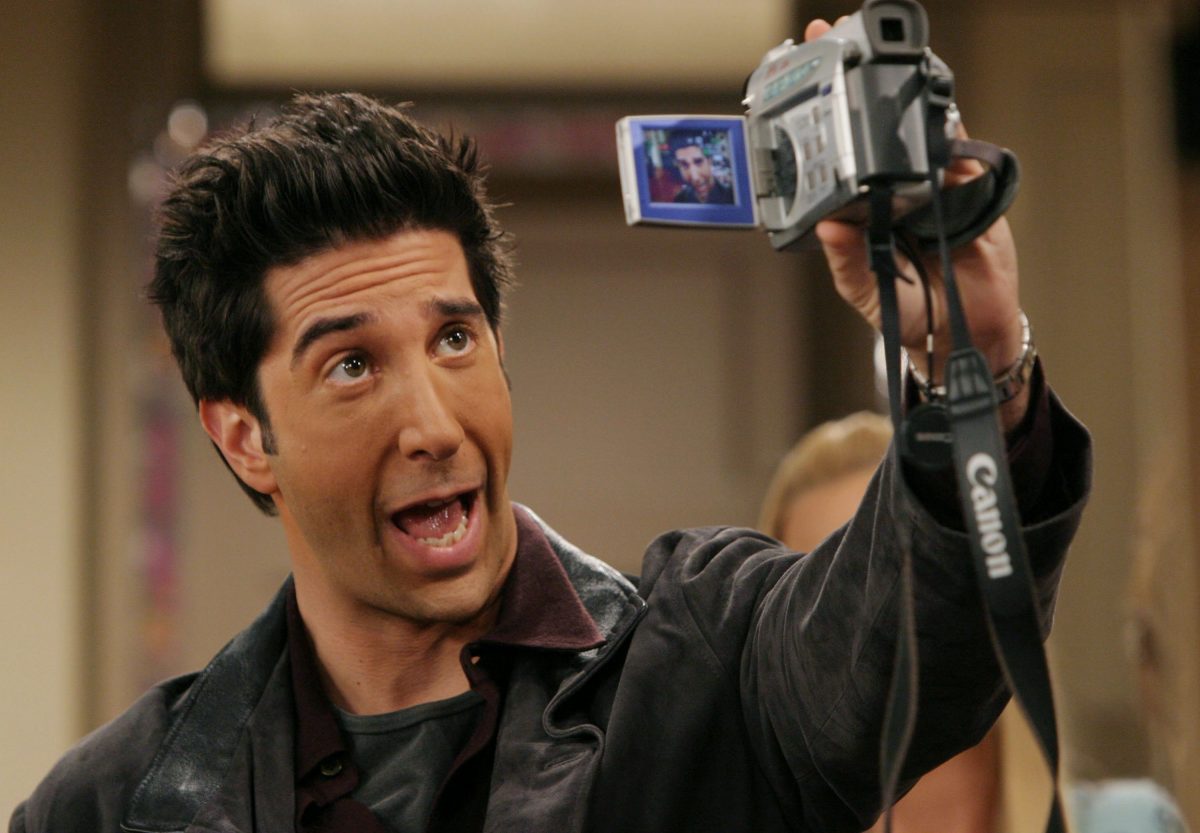 The one where Phoebe forgoes symmetry for the sake of a single, youthful braid. This look is still echoed at slumber parties the world over, and for good reason. The single, smartly-placed braid requires minimal skill or time commitment and evokes an infectiously playful spirit. It isn't nearly as involved as some of her other looks but is a win all the same.

If one sleek blonde fashion icon isn't enough, invite Reese Witherspoon to guest star and be twice as impressed by the seemingly impossible lack of baby hairs and frizz that accompany these silky straight styles. The no-nonsense blow-out is a far cry from Rachel's dramatic namesake cut but deserves acclaim as a healthy, humble alternative. Until the end of Season 7, Rachel opts for variations of this long, straight style more often than she experiments with curls, crimps, or updos.

Rachel's time in the maternity ward teaches viewers that they're never too old for emergency pigtails. These short and casual tails differ from Phoebe's carefully parted and neatly tied plaits in that they are born from practicality rather than careful construction. If it's possible to be both practical and whimsical, Rachel's loose and low ponytails succeed. How like the poster girl-next-door to be effortlessly cute even in a moment of chaos. 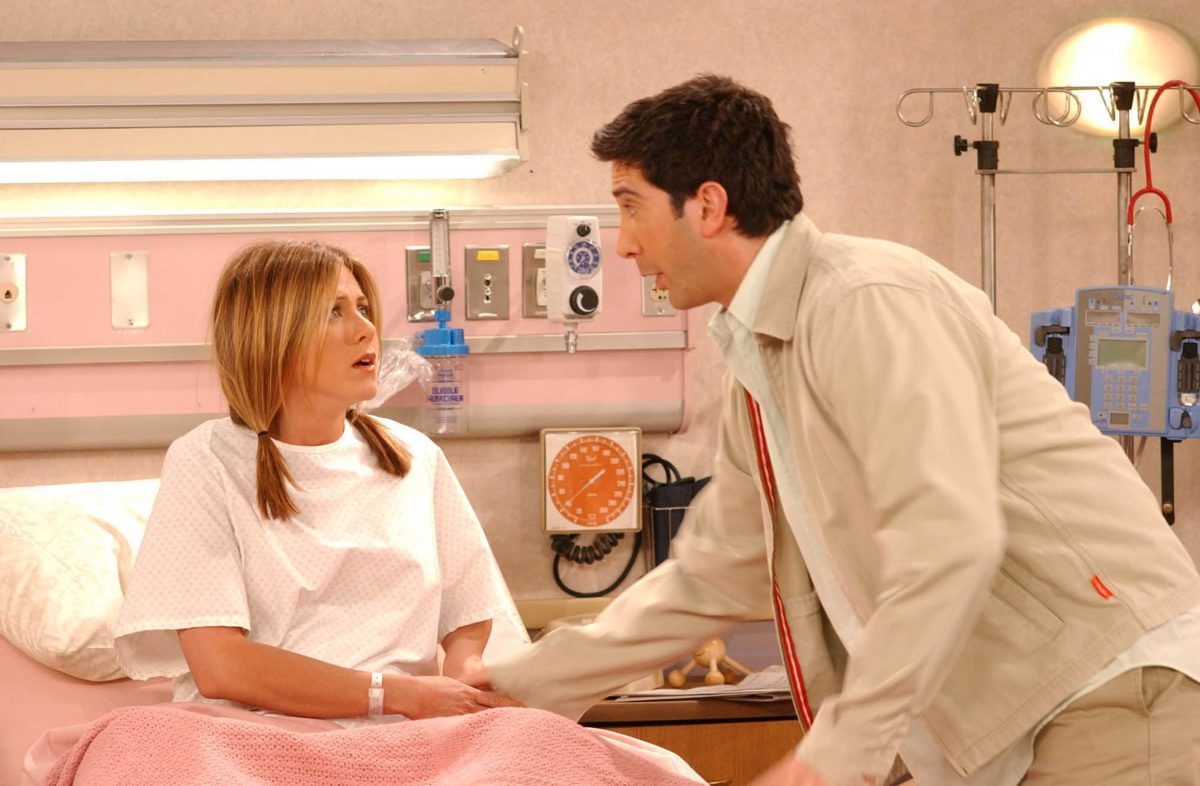 Phoebe's radiant blonde locks are straight but not straw-like in this smartly moderated flip-out style. Of course, the look wouldn't be complete without a light, tapered fringe and signature 90s center part — a trend that has endured long past the decade. Although Phoebe and Rachel's character traits could not be more different, this hairstyle evokes the same girl-next-door innocence with a nod to Phoebe's trademark, quirky flair.

The spiky updo is a classic 90s look that Rachel, Phoebe, and Monica returned to again and again. The real genius of this style is the crocodile clip — an unassuming but versatile accessory that can be paired with just about any wardrobe at any age. To achieve the same sharp, spiky from earlier seasons, wrap hair tightly and use barrettes to secure any loose pieces. A few small strands of hair can be pulled from either side for a face-framing effect.

This infamous recurring character makes her debut as early as episode 5, Season 1, but never sticks around long enough to become part of the inner circle. Janice's loud style often mirrored that of 70s rock and roll icons — plenty of animal prints and chunky, untamed volume. Unlike the other women on the show, she often embraced frizz and fly-aways for an intentionally unruly aesthetic. Her lush pompom ponytail and wild, thick wisps seem to chortle, "Oh Chandler!"

The one with shaggy volume

Monica's early-seasons feathered fringe and short bob are likely how we remember her, but her appearance evolved relentlessly throughout the show. At its longest length, she styled her hair like a grown-out shag with long, side-swept layers. This straight but not poker-straight texture makes the look more natural and less rigid than hair that has had the life flat-ironed out of it. Preserving a subtle wave allows her rich brown locks to appear supple and voluminous.

Rachel's near-bohemian waves appeared in the final seasons of Friends and gave Phoebe's renaissance hair a run for its money. Soft honey highlights, gentle waves, and a medium shoulder length lend this look a bit more maturity than her prior hair statements. This change makes sense for Rachel, who boldly transitions into adulthood after becoming pregnant with baby Emma. 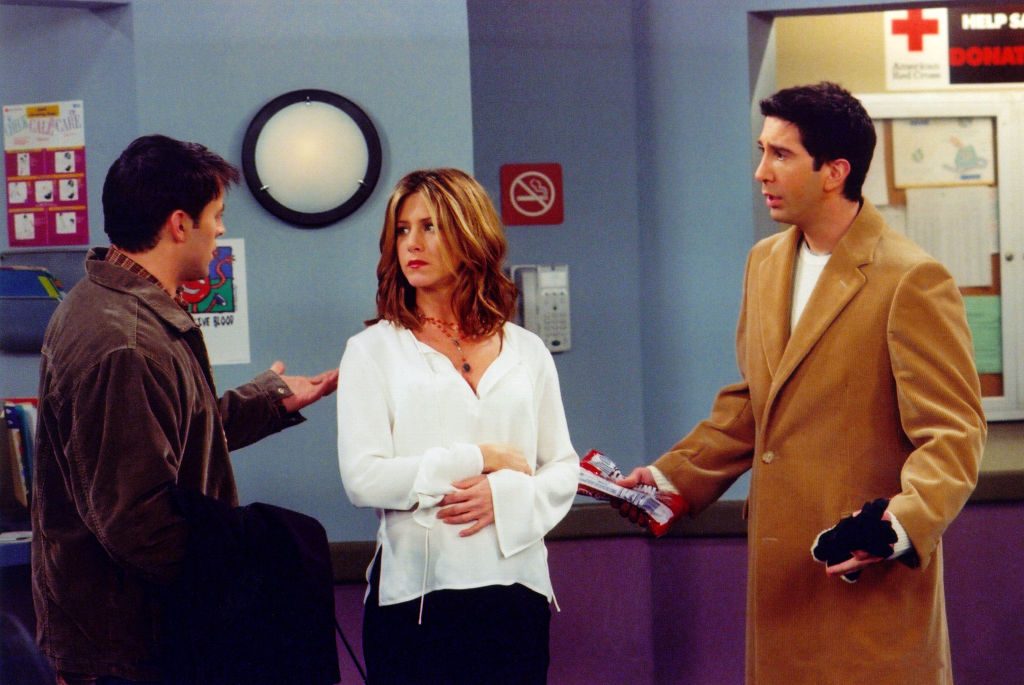 In yet another style era of Friends, Courtney Cox's character grew out of her classic feathered bob and embraced a seemingly effortless, face-framing messy updo. This look is calmer and more reserved than the 90s girl, short and spiky clip-up, but still takes full advantage of the beloved crocodile clip. Like her long shag, it evokes a graceful maturity that Monica gradually grows into. 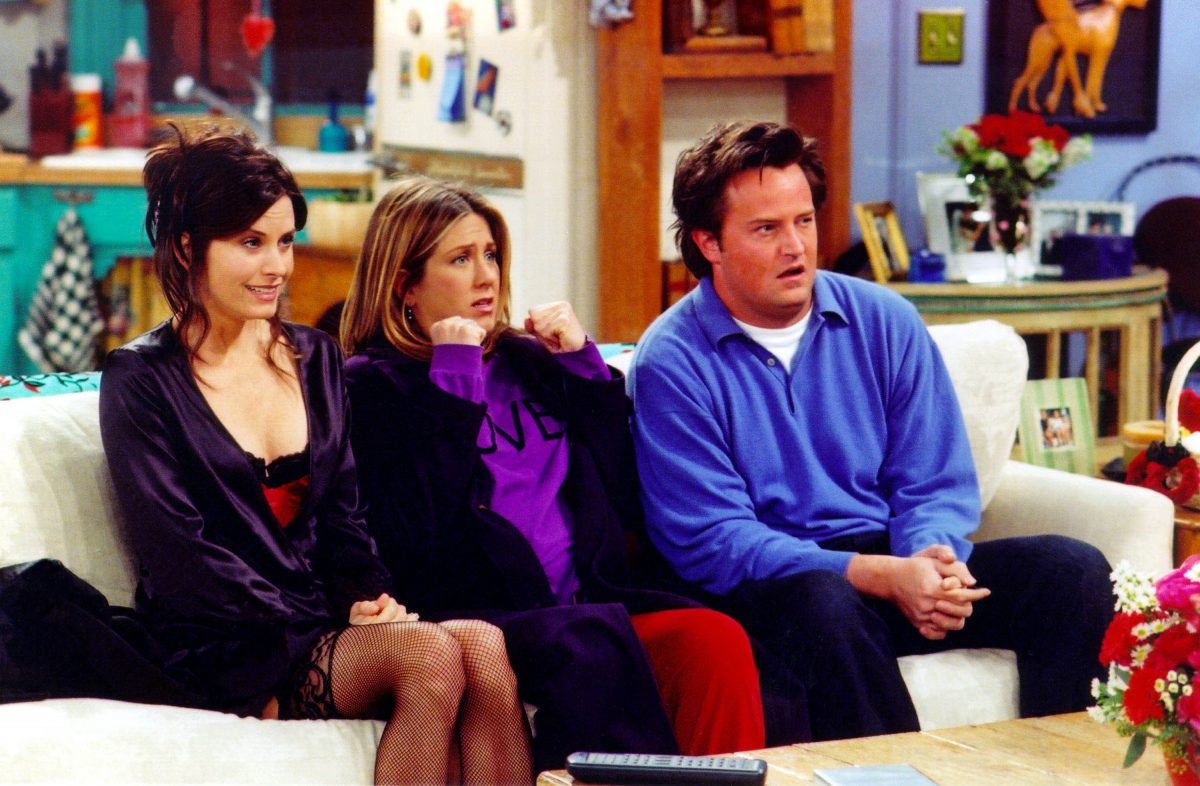 Tress textured beach waves, long layers, and grown-out roots come together to create a truly timeless style. Somehow, Aniston's crisply defined waves appear deeply conditioned and full of body, even at the roots. This is the salt-water squirt bottle look admirers try to achieve but can never get quite right. 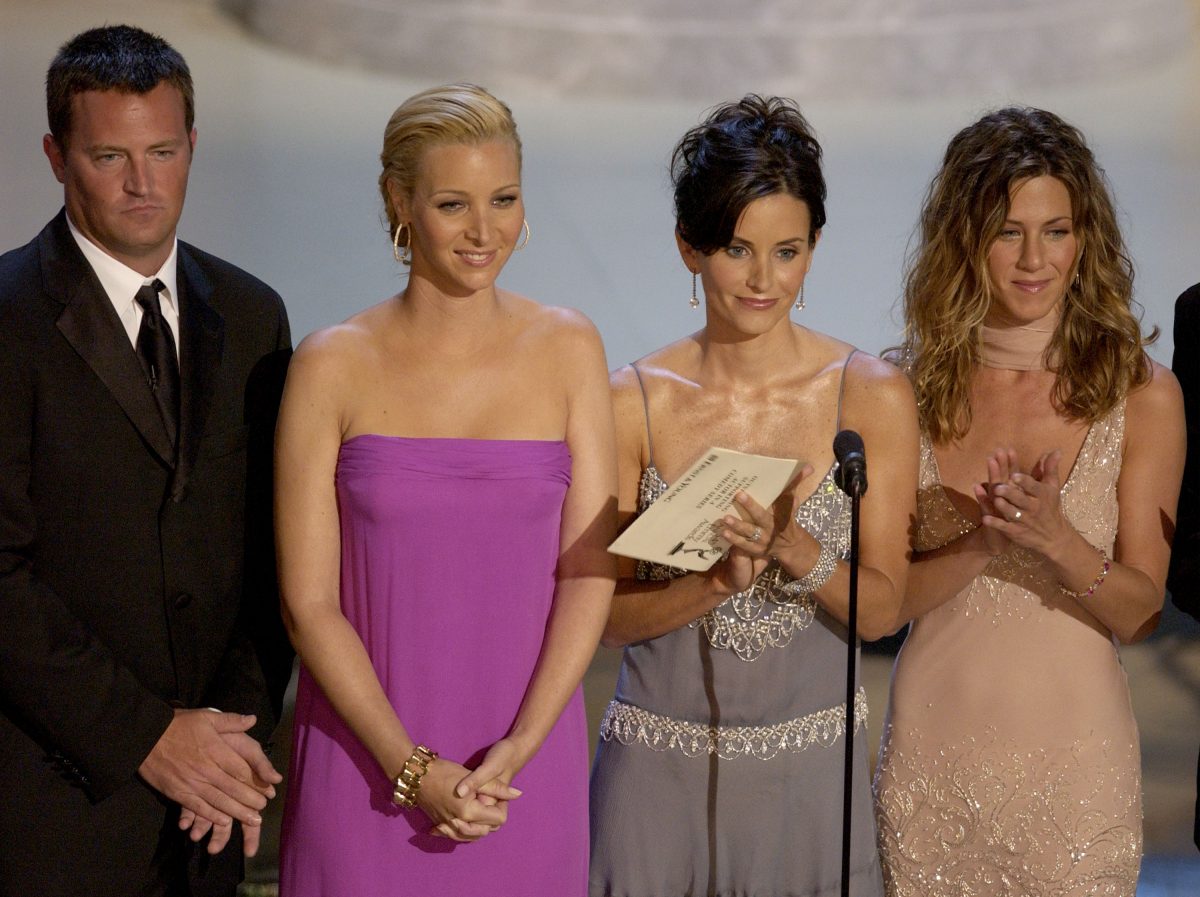