With cars, you remember how you felt. The rumble of a big-block V-8 through untamed exhaust pipes. The excitement of sitting on the bench seat and reaching up to shift the three-in-the-tree. The smell of a bit of burnt rubber from the tires of mom's overpowered station wagon when you floor it. Watching a movie with the family, the drive-in speaker hooked to dad's window. Taking a date for a drive. Watching a pro put a car through its paces in NASCAR or at Talladega. These are the cars of our memories, though somehow the names have slipped to the back of our minds. How many do you remember? How many have you forgotten? And did you or someone you know own one?

The Maverick was a car of the 1970s, built from 1969-77. The base is the rear-wheel-drive platform of the 1960 Falcon. As a compact car, it was intended to keep buyers from turning to the increasing numbers of imports arriving during that time. With a long hood and the fastback roof, it echoed muscle car style and allowed Ford to position it against more expensive cars by adding a few upgrades. There were even a limited number of Maverick police vehicles sold, but they weren't quite up to the job. The Ford Maverick was a fun and versatile car and a great one to have during the oil embargo of the 70s. 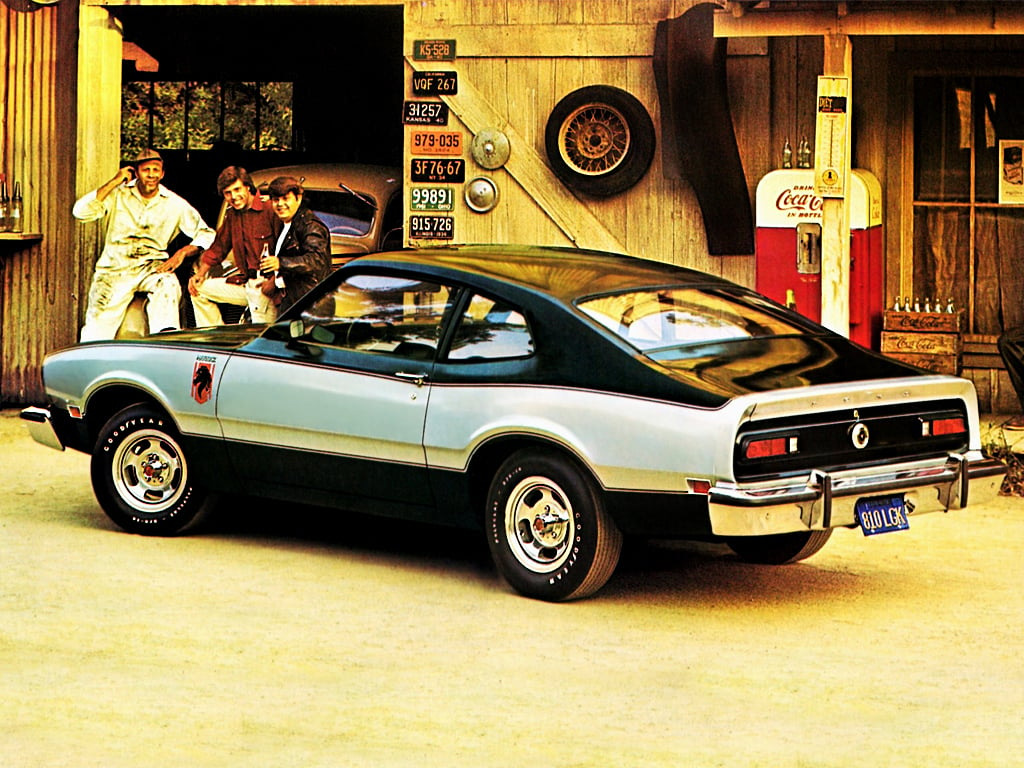 This was GM's top-of-the-line station wagon. You might remember it for the luxury or the way it swallowed up your whole family and maybe the neighbors, too. It had up to eight-person seating and, in 1975-76, it was the longest station wagon ever built. The modern version hit the market in 1970 and was last produced in 1996, so it's a part of so many memories. Pulling about 5,000 pounds of car around was a huge gas-guzzling 7.5-liter engine. 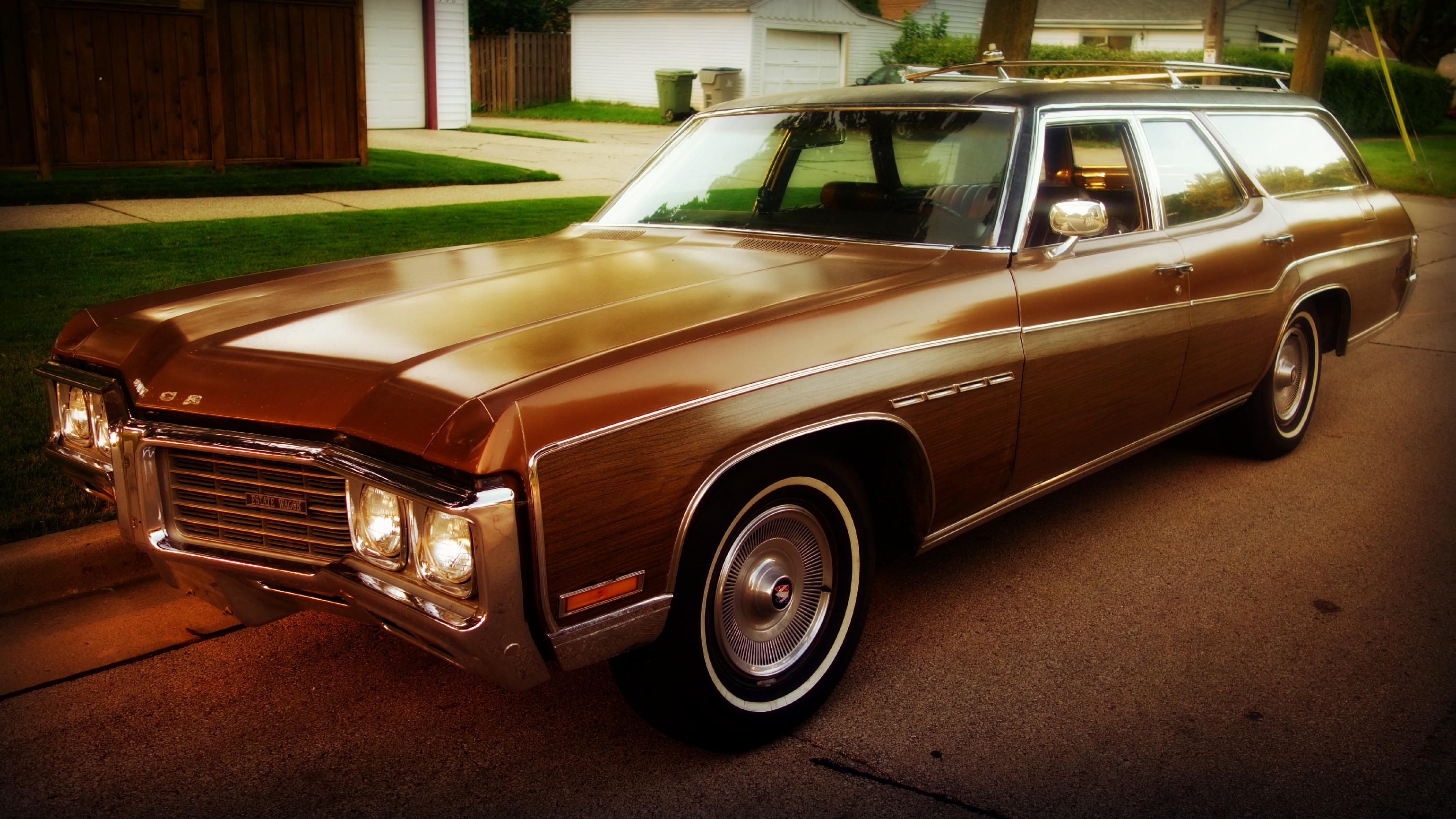 Hauling a large family in style or hot rodding to entertain the crowds, the Chevy Kingswood played many roles. The optional 427 cubic inch engine put out 390 horsepower and, as Hemmings reminds us, let the Kingswood haul more than family, food, and building supplies. Teens often learned to drive in the family station wagon, but this one might teach some bad habits. 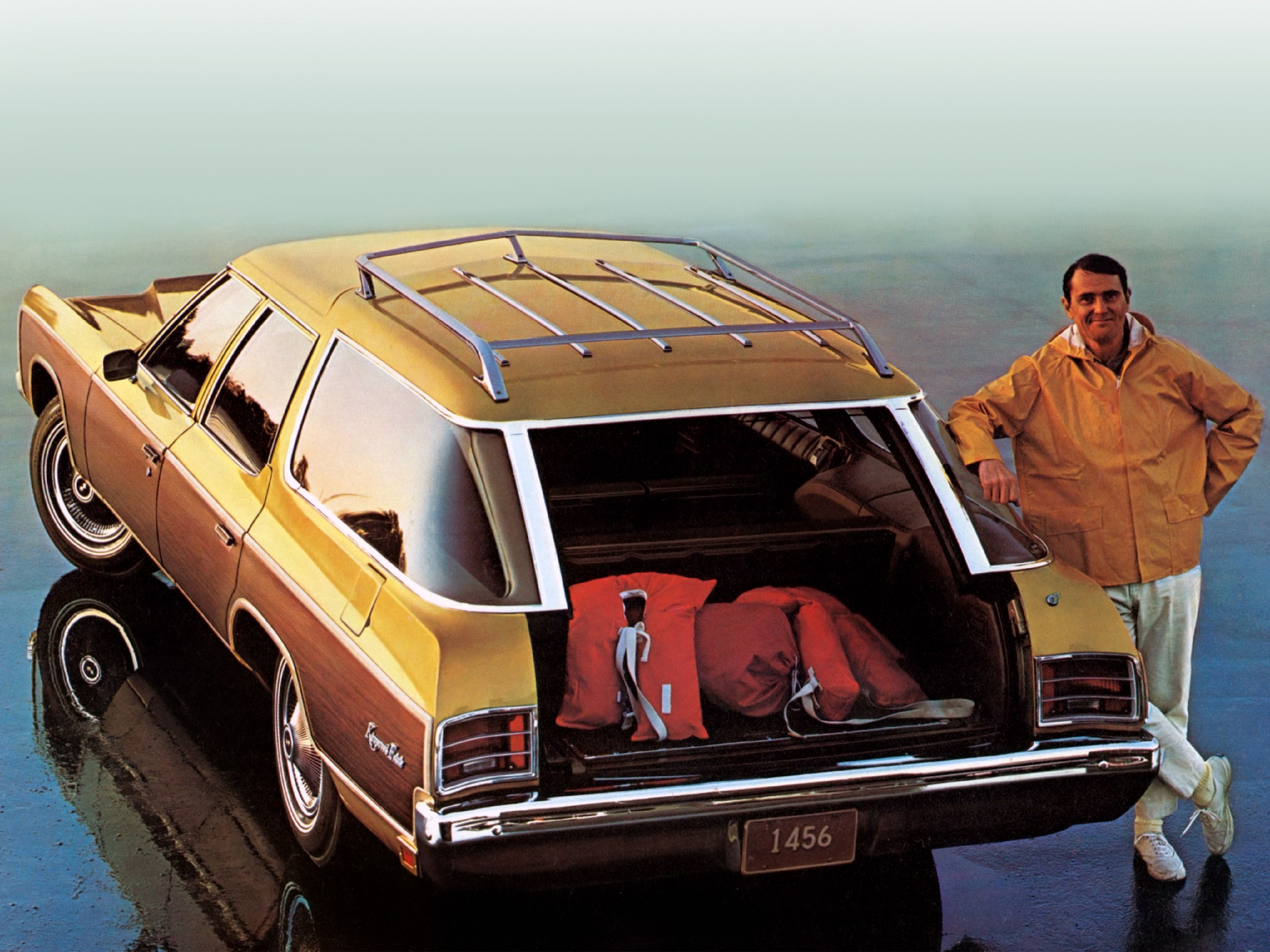 Basically, a four-door Ford Bronco, the Centurion Classic, was by default Ford's competitor to the Chevy Suburban. It had three rows of seats with space for nine. Specialty conversion company Centurion Vehicles of Michigan built them with both Bronco DNA and either Ford F-150 or F-350 muscle. Referred to as the C150 Classic and C350 Classic, they were powered by big (5.0 or 5.8 liter) and bigger (7.3-liter diesel, 7.5-liter gas) engines. On the C150, 4WD was optional; on C350, it was standard. The Ford Expedition is a clear relative: based in part on the F-150, in its early years, the manufacture of the Ford Expedition took over the Bronco production plant though it has since moved. 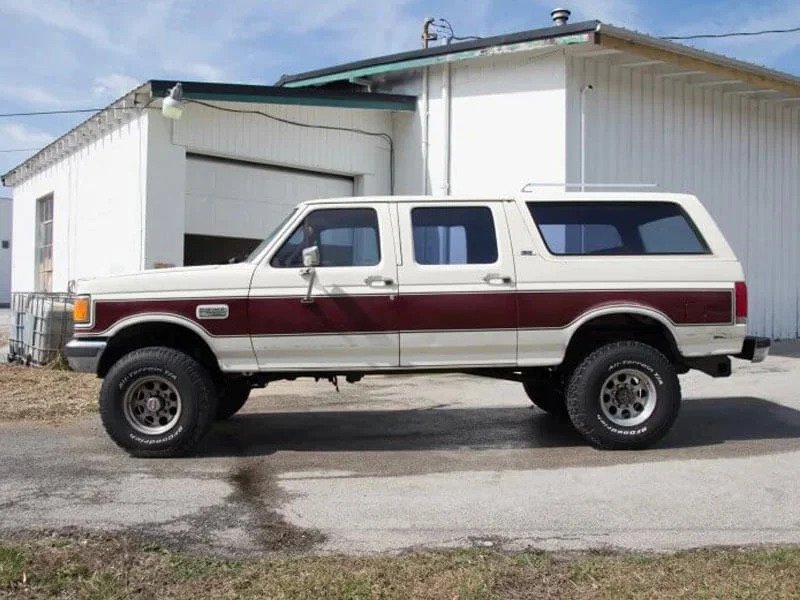 A mid-1960s full-size car related to the Pontiac Catalina and GTO, the 2+2 in various forms was on the U.S. market from 1964 to 1967. It had 389, 421 and 428 cubic inch engines over its short production life and was available as a two-door coupe or a convertible. It was a large, elegant muscle car, styled with stacked headlights and a split grille and sized to give the driver a feeling of driving something substantial. The two in front enjoyed bucket seats, and as a 2+2, there was room for two more as tag-alongs in back. 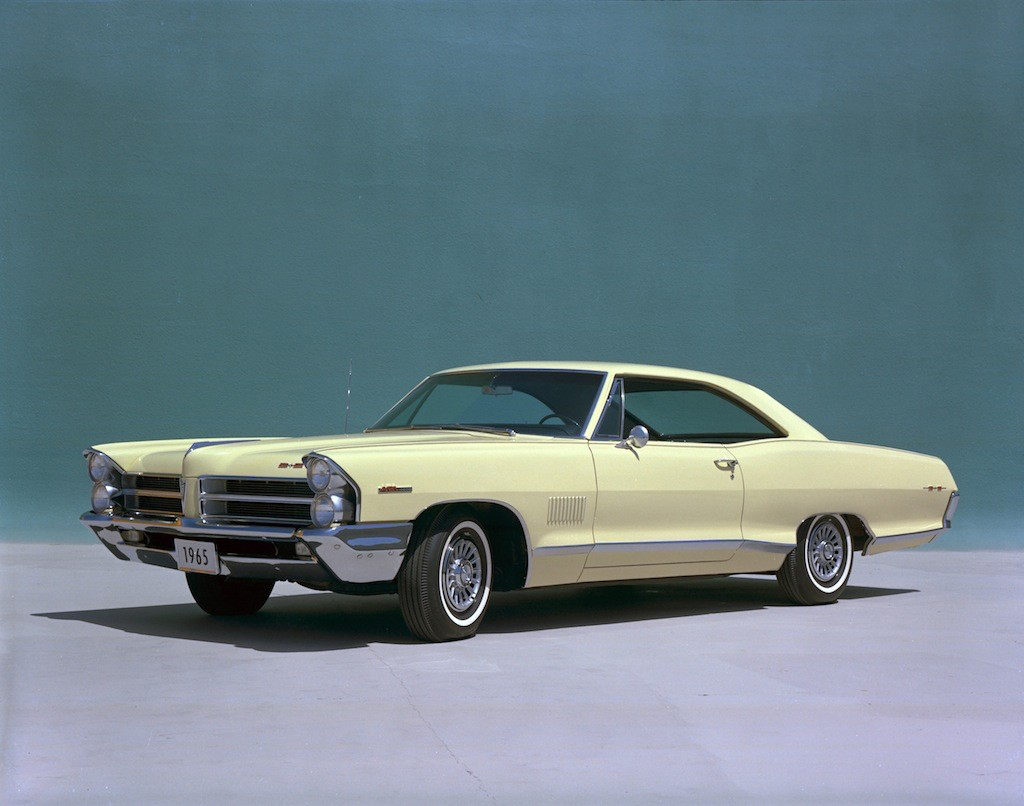 There's no mistaking the bright Sebring Yellow of the 1970 Olds Rallye 350, painted from stem to stern, including bumpers. The word is that the Rallye 350 was a Hurst/Olds model repurposed due to corporate policy changes regarding engine sizes for intermediate and large automobiles. The Hurst/Olds line resumed in 1972, and as an experiment, the Rallye 350 didn't catch on with customers, so either way, the model was doomed to a short life and production quantity. In fact, rumor has it that most buyers of this eye-catching car were company zone representatives and dealers getting it off their lots in 1971. 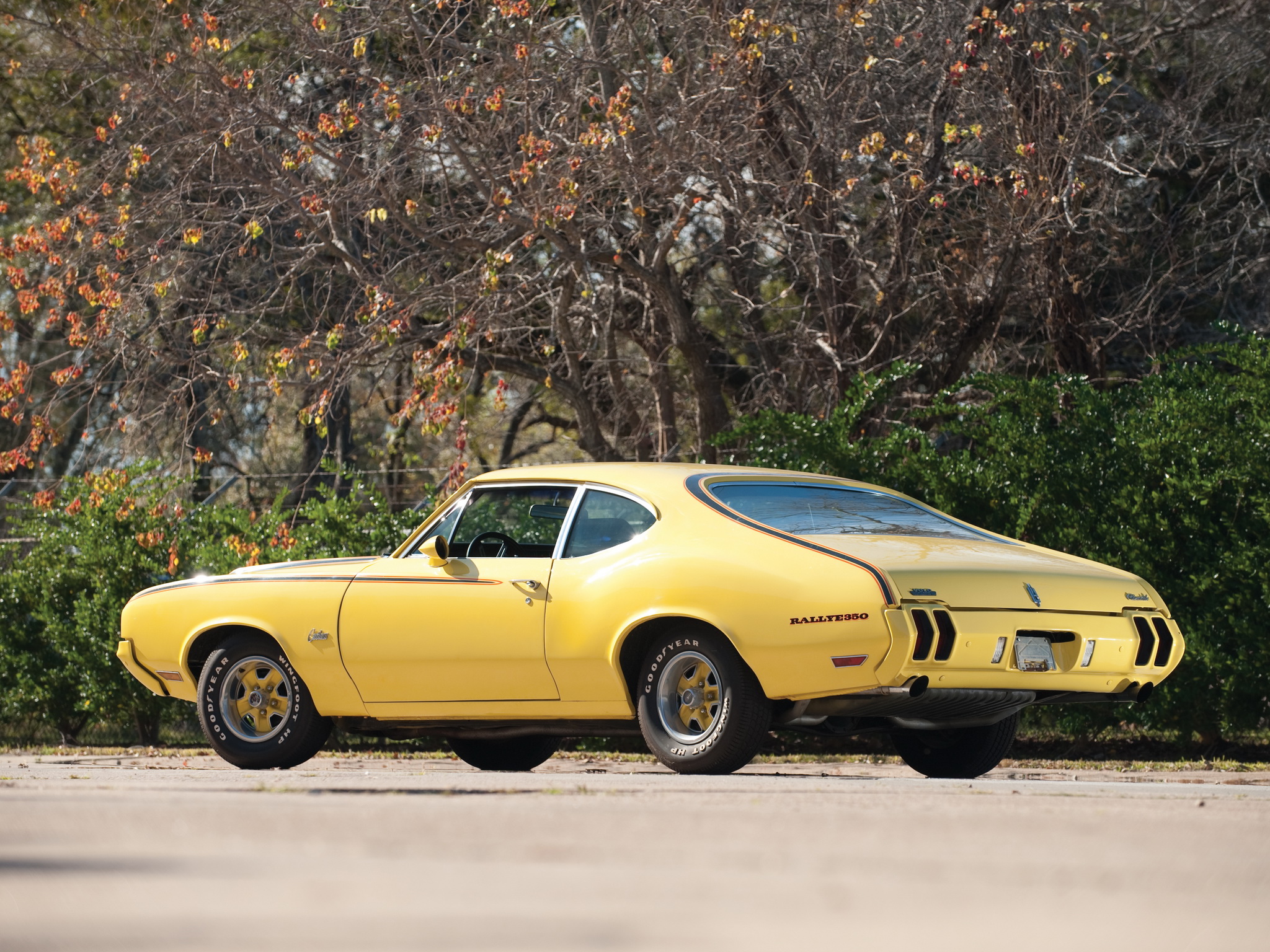 Even shorter-lived than the Olds Rallye 350 was the Ford Torino Talladega, available for a few weeks in 1969. The reason is entirely different, though: Ford had made aerodynamic changes for NASCAR, and to comply with homologation rules and get the special version certified to race, they had to produce 500 and offer them for sale. One significant feature of the Talladega model is the change in the grille, headlights, and front bumper to improve wind tunnel results.

The Barracuda and its often outrageous paint colors like "Lime Light," "Lemon Twist," and "In-Violet" started out based on the same platform as the Plymouth Valiant, but in the third generation, it switched over to a Dodge Challenger-inspired design. After Chrysler commissioned Hurst Performance in 1968 to create about fifty racing Barracudas with 426 cu in HEMI engines, somehow Chrysler found room in this new third-generation platform to install and release the 426 HEMI to the public.

In 1964, fifty Mercury Comet cars were prepared for racing A/FX (factory experimental class, A engine size) combining ultra-high performance with their lightweight and achieving great success. This square compact car was available to the public with either a V-6 or V-8. It was restyled to Mercury standards when it joined the line in 1962 and then began getting specialized touches such as six bullet-shaped tail lights on the sport model which preceded the Cyclone, then a fastback roof to hint at the car's performance abilities. 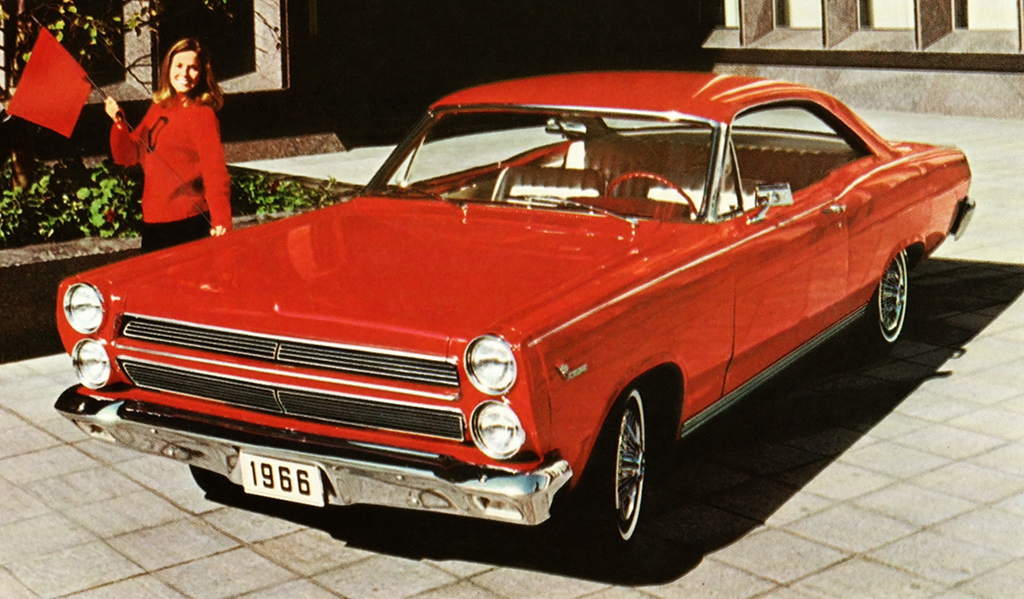 The first round of Chrysler 300s, produced from 1955 to 1965, were performance-luxury models just as the ones produced in the late 20th and early 21st century. The originals were named for their horsepower rating of 300 hp or above, though, and only one modern model meets that criteria, the 300C. The Chrysler Hurst 300 was produced in 1970 by Hurst Performance, in very limited quantities of around 500. They were distinctive with their white and gold paint and tan leather interiors. All of them had a 375-horsepower 440 cubic inch engine. Nearly all were coupes, with two convertibles known to have been produced. 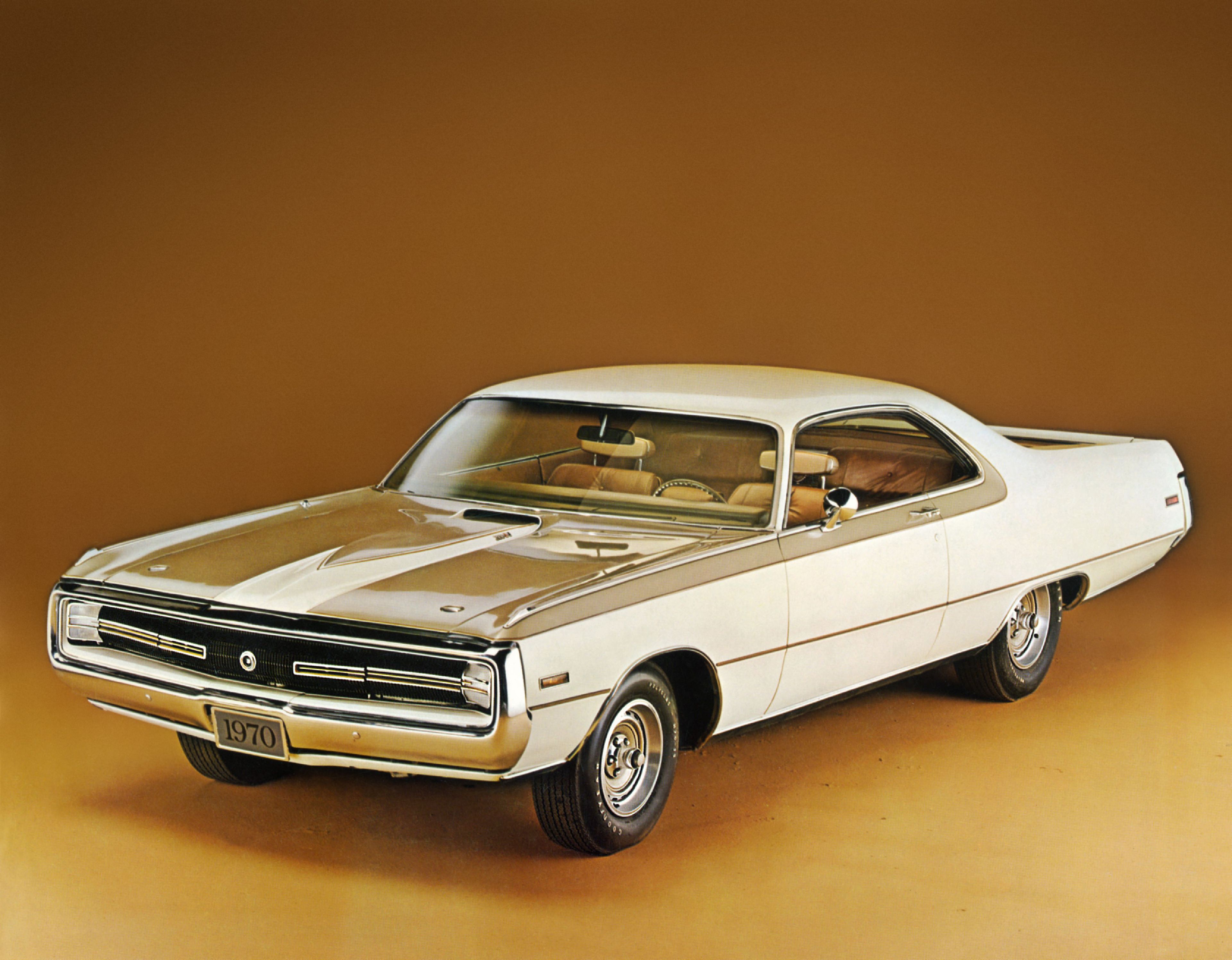 In 1991, Production Automotive Services began producing the first of 4,697 Typhoons for GMC, using that year's Jimmy SUV as the platform. They added a Mitsubishi turbocharger, Garrett intercooler, revised intake and exhaust systems, and a new throttle body. The new, custom all-wheel-drive configuration produced a 35 front, 65 rear torque split and modifications to the brakes, differential, and suspension. The end result was a 0-60 mph time of 5.3 seconds and a GMC Jimmy, which could probably satisfy the owner's desire for one of those impractical sports cars.

The Chevelle line branched off into a variety of models with coupes, sedans, convertibles, station wagons, and a "utility vehicle," the El Camino. The Chevelle SS, or Super Sport, was the part of the family tree aimed at muscle car fans. Other Chevy lines, such as the Impala, were tagging their cars with the SS designation, and in the case of the Chevelle, it covered a variety of configurations including the 1970 LS6 with 450 horsepower, 454 cubic inches, and 500 lb-ft of torque for classic muscle car power. 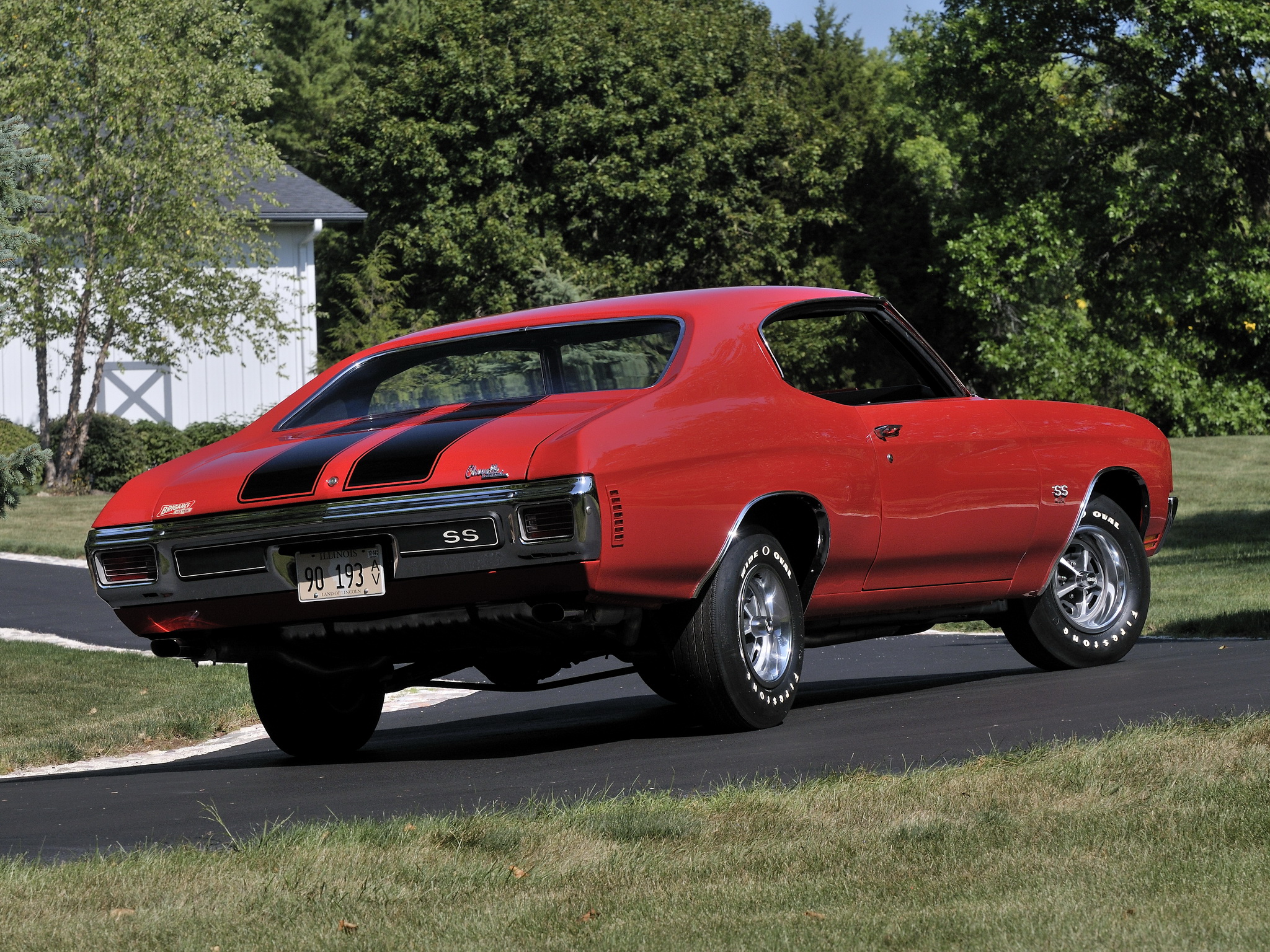 The Ford Falcon, produced from 1960 to 1970, was not only a success in itself as a compact car but as a platform that spawned other lines such as the Mercury Comet. In the early 1960s, the Falcon Sprint even provided the mechanical basis for the Ford Mustang. The Falcon was available in two- and four-door sedans, three- and five-door station wagons, and a variety of other configurations. 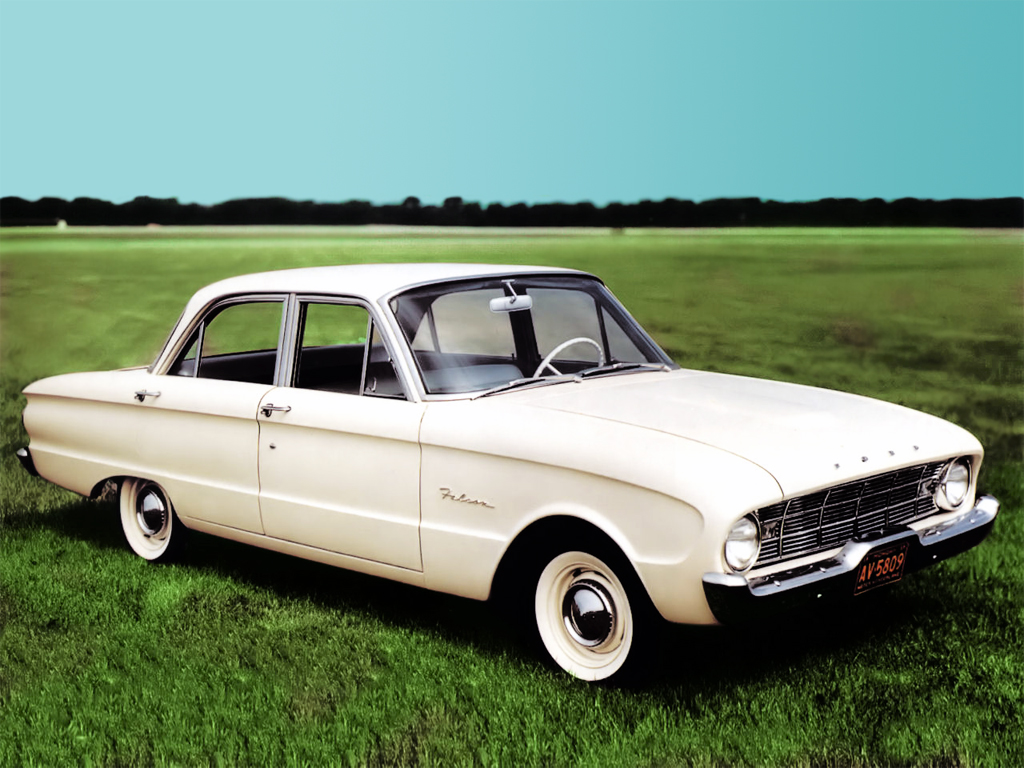 The luxurious Oldsmobile Toronado was ready for the showroom floor in 1966, and last appeared in 1992. It was an early front-wheel-drive vehicle and was a platform for other innovative designs from the UPP (unitized power package) engine compartment usage model to handling characteristics and the "slot machine" style speedo, which moved a numbered drum rather than the indicator needle. Engines varied from an initial 425 cubic inch to larger ones rated up to 400 horsepower, then down as government requirements put pressure on fuel economy, with 185 horsepower the norm in 1977. 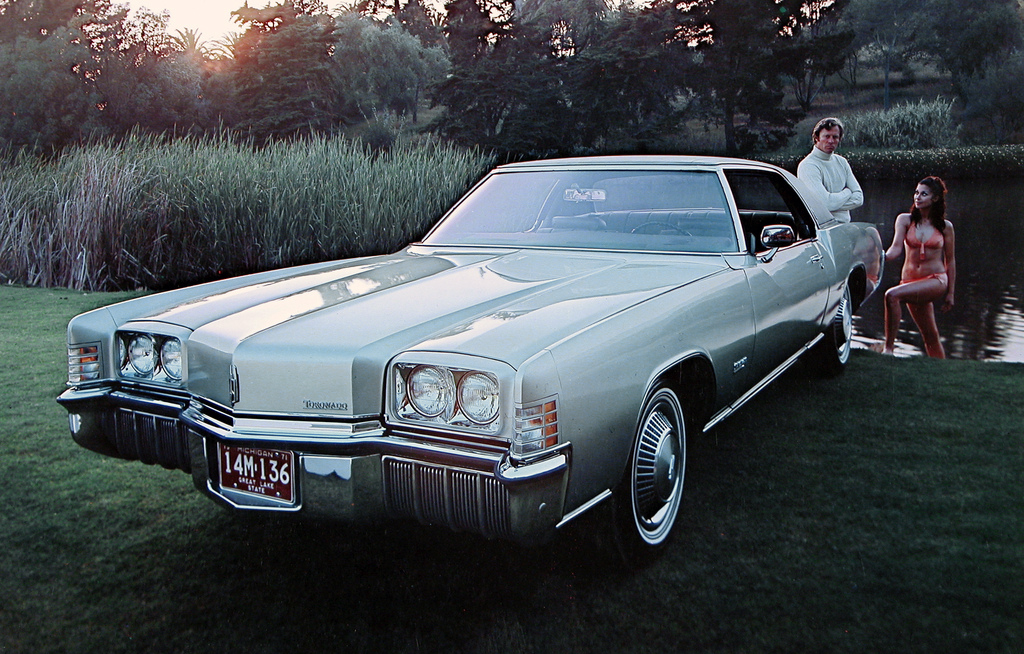 People drive a C4 Corvette for many reasons, from the exhilaration of driving to the pleasure of the car's style and comfort. In addition to the basic C4, there's the ZR-1 version. A record-setter was capable of 24 hour sustained speeds over 175 mph and 0-60 mph in 4.4 seconds. Callaway-upgraded models provide twin-turbo boost for a significant added cost. There have also been many special edition Corvette C4s sold, commemorating anniversaries, pace-car roles, and a Collector Edition to mark the end of C4 production. 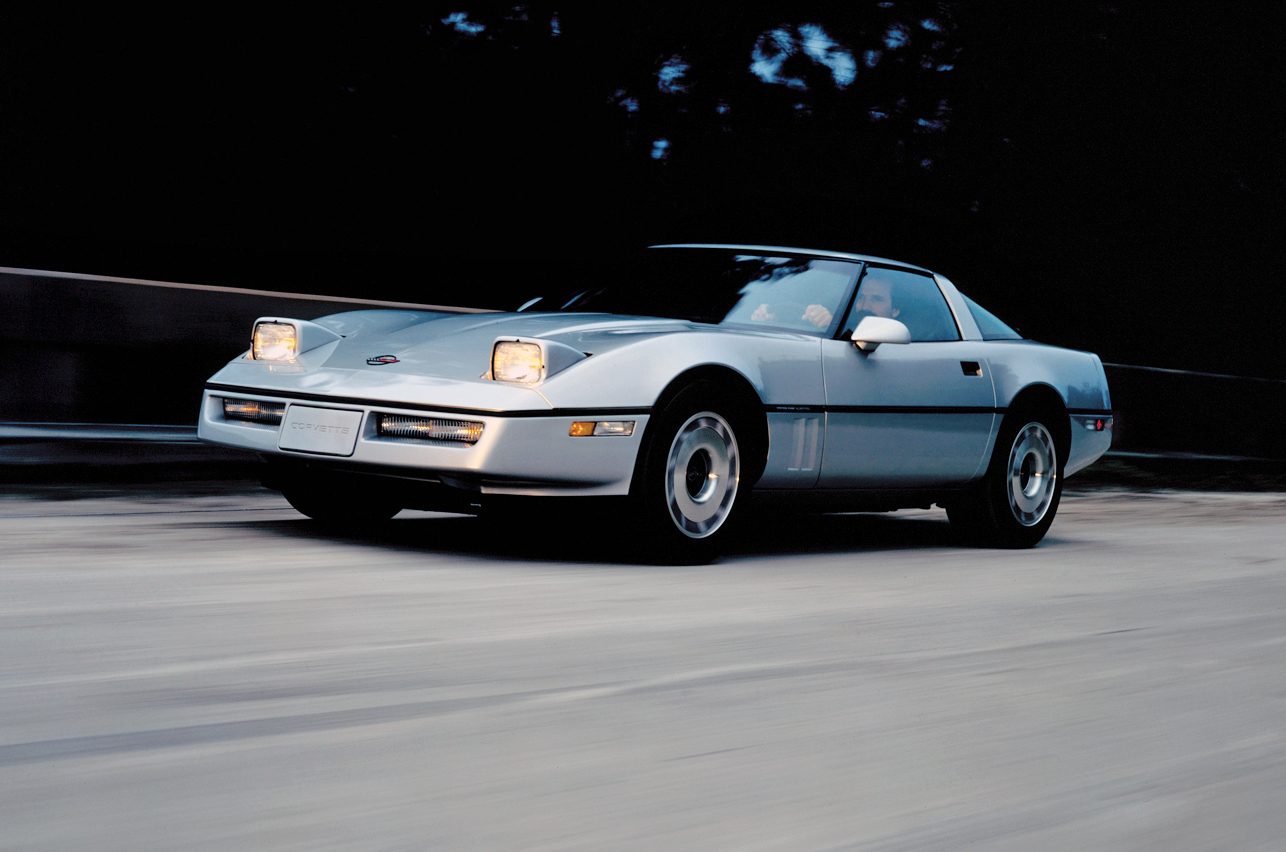 As reviewers have noted, the accent in this version of the Neon is performance, not luxury. The 150 hp 4-cylinder engine and decent handling have made it a popular autocross and amateur racing car. It inherits a selection of competition features from the specialized "Competition Package" version of the Neon, including the 5-speed manual transmission with higher ratios than the standard model. 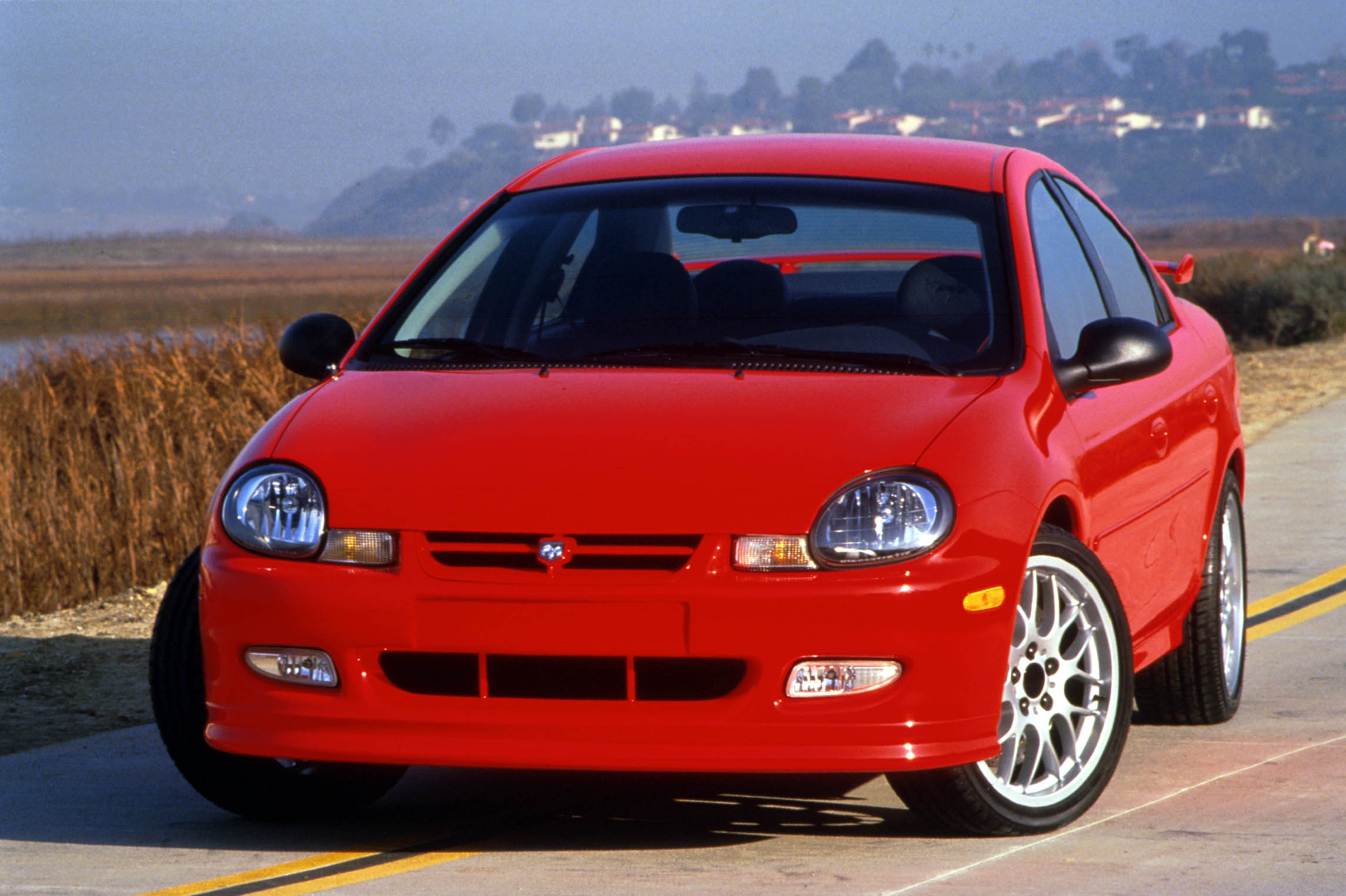 Available from 1961 to 1969, the Impala SS was another model for which Chevrolet really meant Super Sport performance, not just the decorative features applied to many. Several engines were available, all in a V8, and designed for varying levels of ferocity. There were also suspension upgrades, new tires, metallic brake linings, and the best part of all, perhaps, in 1961: these upgrades were available for sedans and station wagons, too. In later years they were restricted to coupes. The Impala SS was an enviable combination of power, agile performance, and large-car comfort. 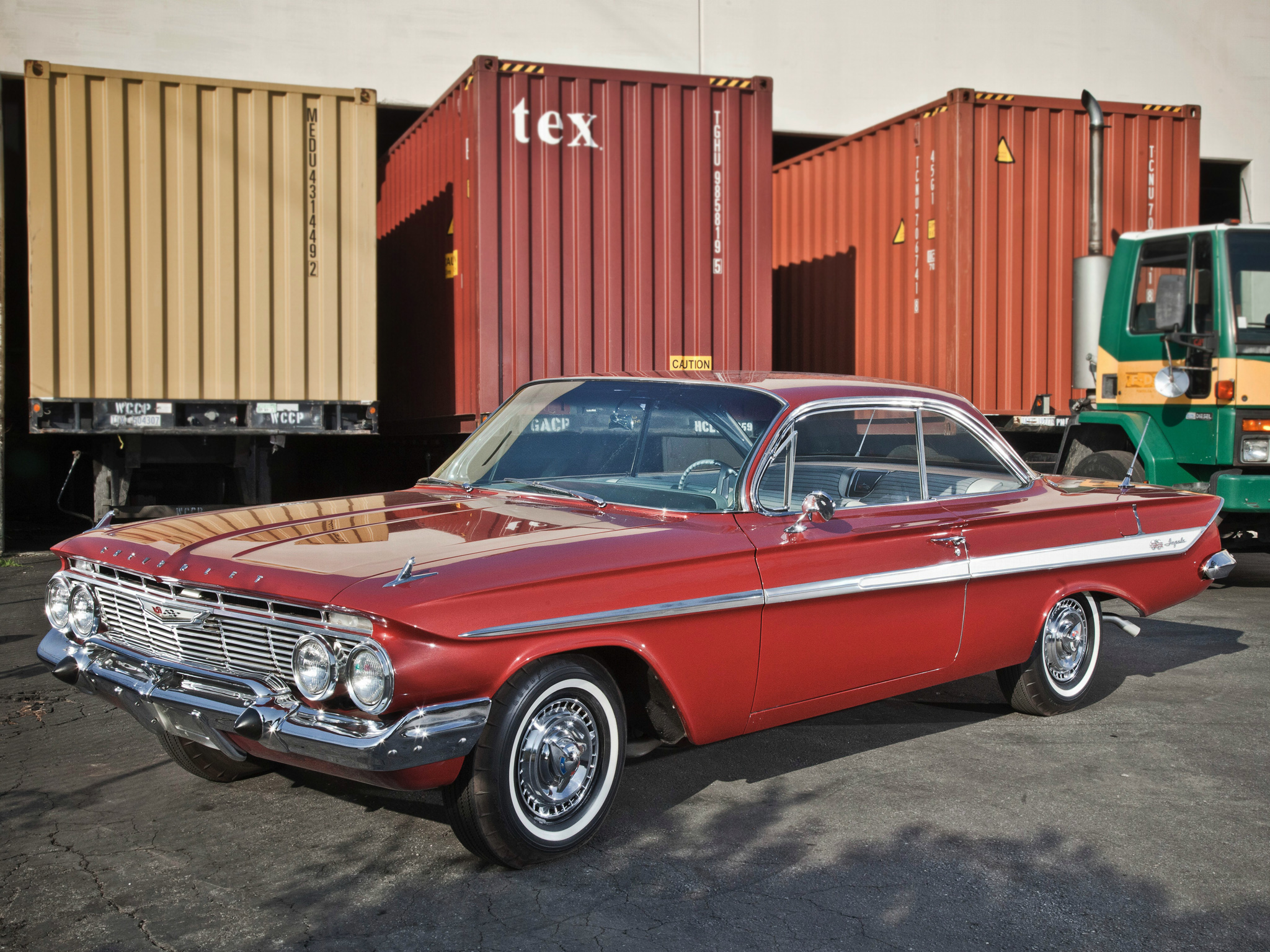 A popular family and corporate fleet car, the Ford Taurus has been in production since 1986. The SHO, for Super High Output, was produced from 1988 to 99 and onward from 2010. Styling is more sporty than the standard Taurus, but not aggressively so. Drivers get the enjoyment of SHO performance without drawing attention to themselves. The current version, sixth generation, has a 3.5-liter twin-turbo V-6 with a six-speed automatic transmission and AWD. The first generation had a 3.0-liter SHO V-6 and five-speed manual transmission and FWD. 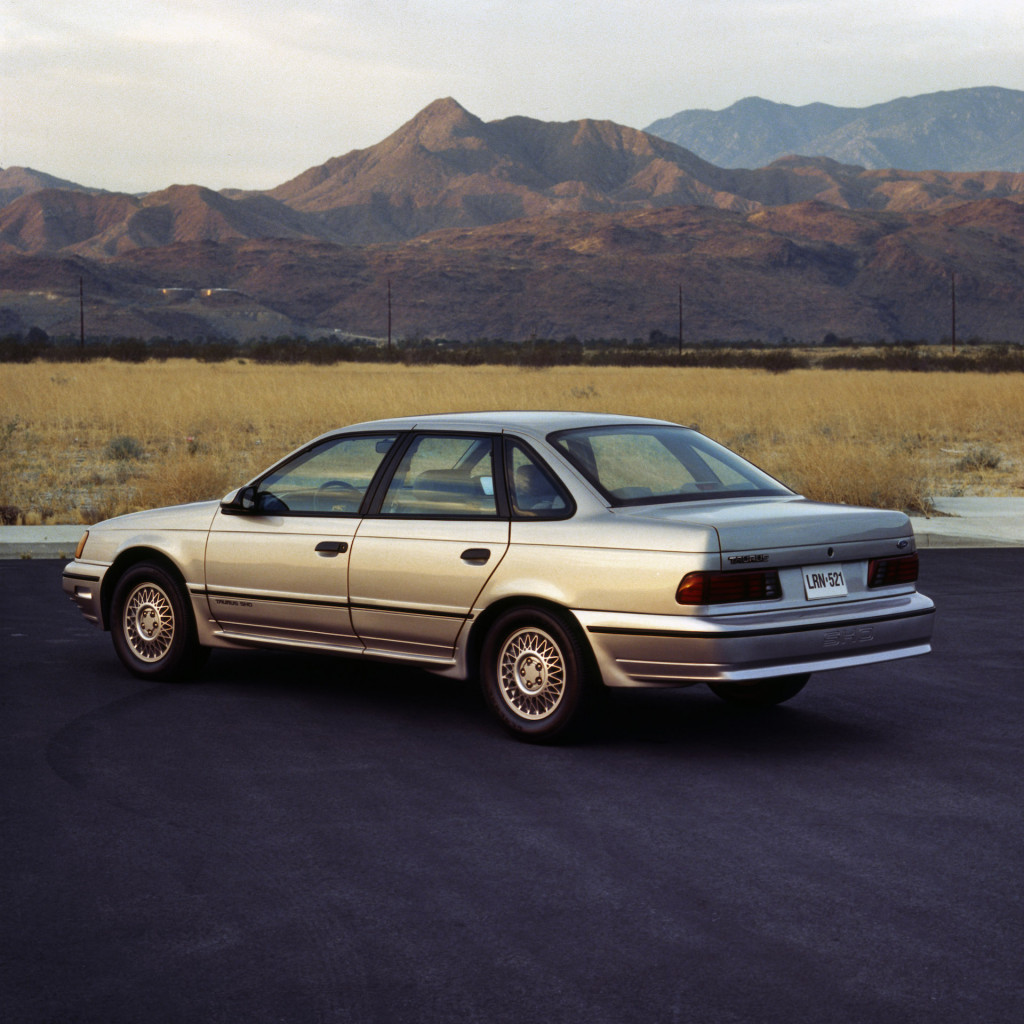 A popular car for the style-conscious in the 1980s as well as the performance-minded, the IROC-Z, named for the International Race of Champions, began as an option package for the Z28 model. It was produced from 1985 through 1990. There were suspension upgrades and lowering, ground effects, wheels, fog lights, and access to additional options such as transmission and rear axle selections, Corvette-sourced Tuned Port Injection, and several engines in the 150 to 200 hp range. 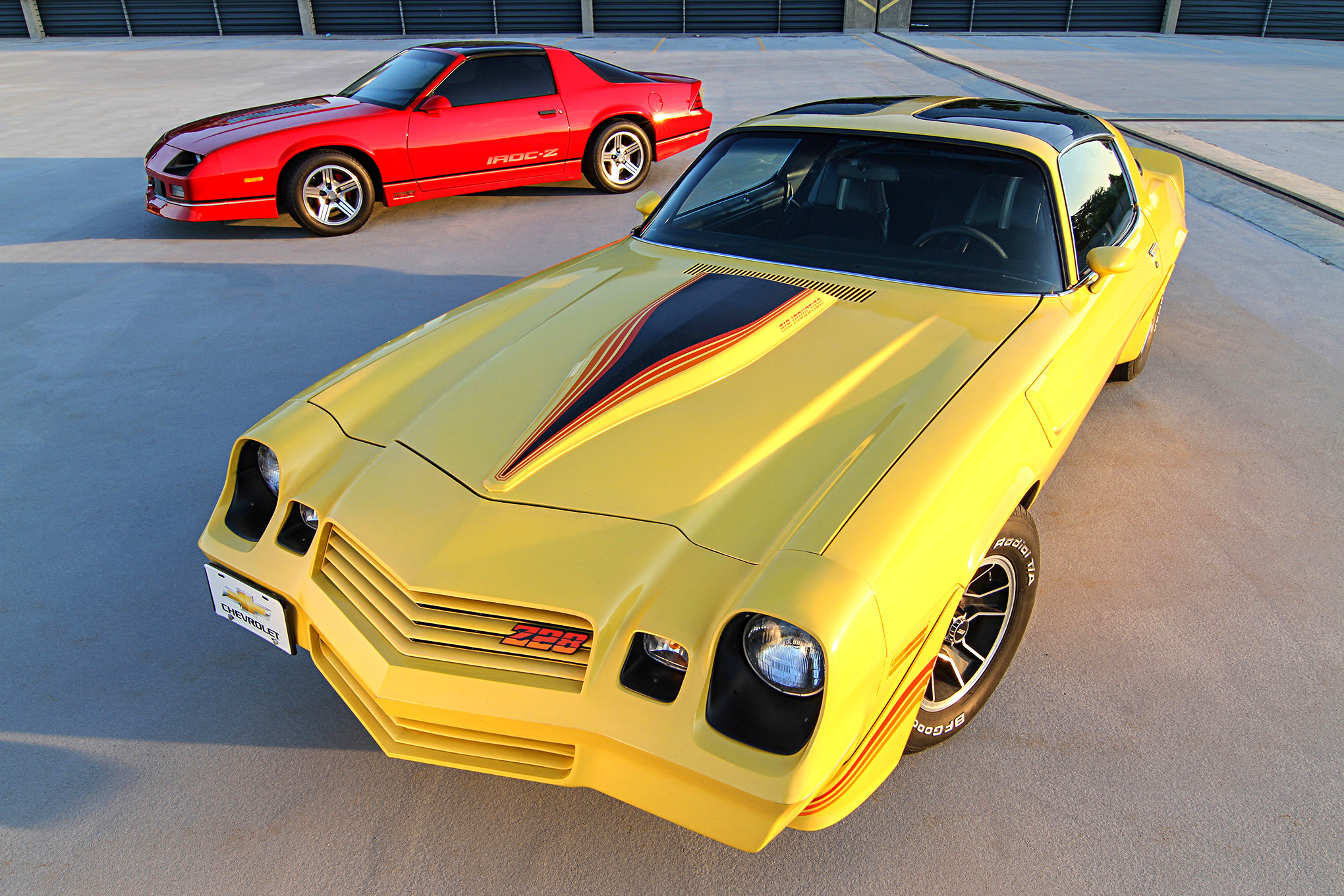 Iconic throughout its 50-year production life from 1955 to 2005 (with a gap from 1997-2002), the car featured in the movie American Graffiti was sold as a personal luxury car, not a sports car. In fact, versions of the T-Bird have been sold under the Mercury and Lincoln brands as high-end luxury vehicles. The Thunderbird began as an alternative to the Corvette, providing style and comfort rather than appealing to buyers of sports cars, an approach that proved successful. Initial engine and transmission components were sourced from other Ford standard car lines. While styling and decent performance brought the Thunderbird through fifty years and eleven generations, versions of the T-Bird have had success in NASCAR and at Talladega Speedway. 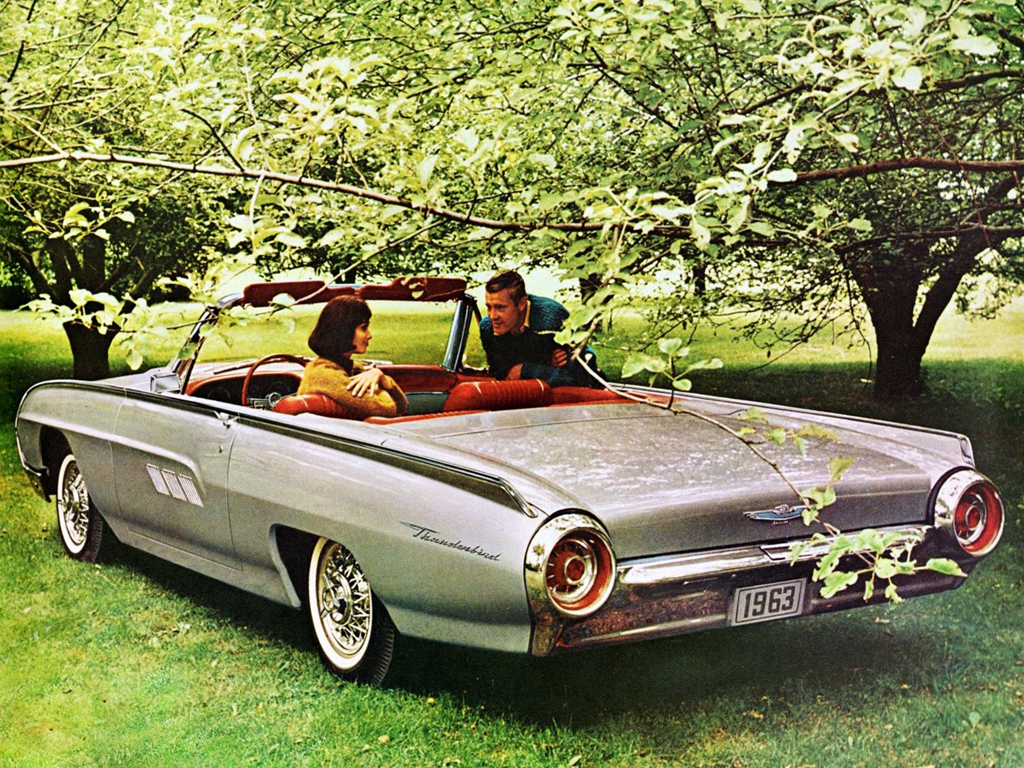