Can You Freeze Yogurt?

Can yogurt be frozen? Yes — and no. Yes, you can most definitely freeze yogurt, whether you bought it at the store or made it yourself. But will that yogurt still be the same when you thaw it as it was before you froze it? Definitely not! However, whether or not that actually matters depends entirely upon how you want to use the yogurt.

What happens if you put yogurt in the freezer?

Wouldn’t it be great if yogurt + freezer = homemade frozen yogurt? Sadly, this formula doesn’t quite work out in the real world. If it did, there’d be no market for frozen yogurt in the ice cream aisle because we’d all be making it ourselves! The truth is, frozen yogurt and yogurt that has been frozen are two completely different things. Putting refrigerated yogurt in the freezer changes the texture irreversibly. You won’t get that velvety ice-creamy texture you expect with frozen yogurt — it will just be a hard solid brick. Even if you allow it to thaw, it will longer have that smooth, creamy consistency that makes fresh yogurt so yummy. Defrosted fresh yogurt looks a lot like spoiled fresh yogurt — even though it’s perfectly safe to eat. 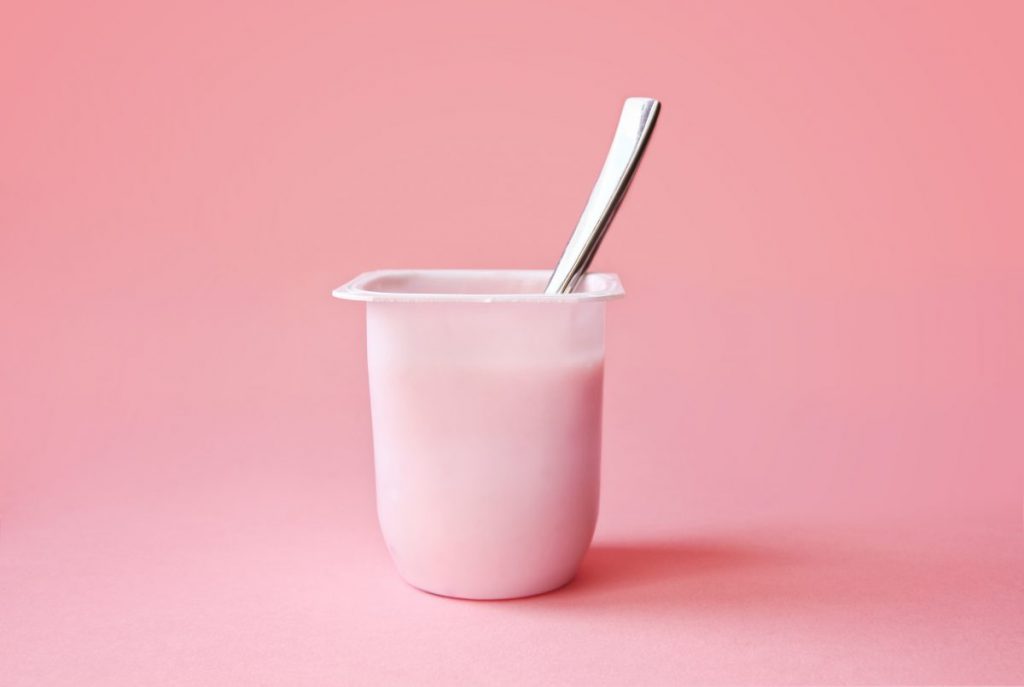 Why does the texture of thawed yogurt change?

Yogurt is made from heated milk, and when milk gets above a specific temperature, a weak gel naturally forms as its proteins coagulate. This gel traps any water and fat within the yogurt, helping it maintain its silky texture. When you freeze yogurt, however, the water in the gel turns to ice crystals which are pulled out of the protein network, breaking down the structure of the gel. When you thaw yogurt after freezing, the protein network is unable to reform, causing permanent separation.

While some commercial yogurt brands add stabilizers like pectin to their products to reinforce the network of proteins, generally you’re better off using thawed yogurt only where texture doesn’t matter so much, such as baking. 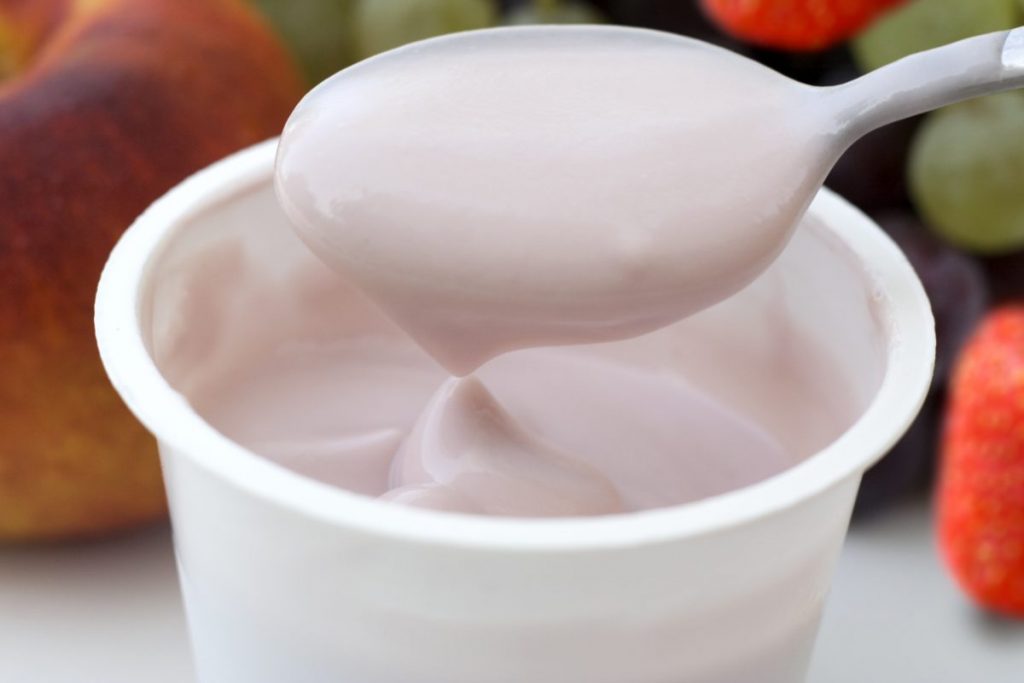 Can I freeze yogurt in its original container?

You sure can. Store-bought yogurt sold in individual containers is perfect for making yogurt popsicles. It couldn’t be easier — simply poke a spoon or popsicle stick through the lid of the yogurt cup and pop it in the freezer. Once frozen, the yogurt doesn’t make a mess or crack, and it tastes great. Homemade yogurt popsicles are a perfect refreshing treat on a hot day or whenever you need a sweet, healthy snack. Yogurt in tubes can also be frozen — in fact, they are designed to be stored in the freezer without affecting the texture. When you pack them for lunch in the morning, they’ll be thawed and smooth but still perfectly chilled by lunchtime. 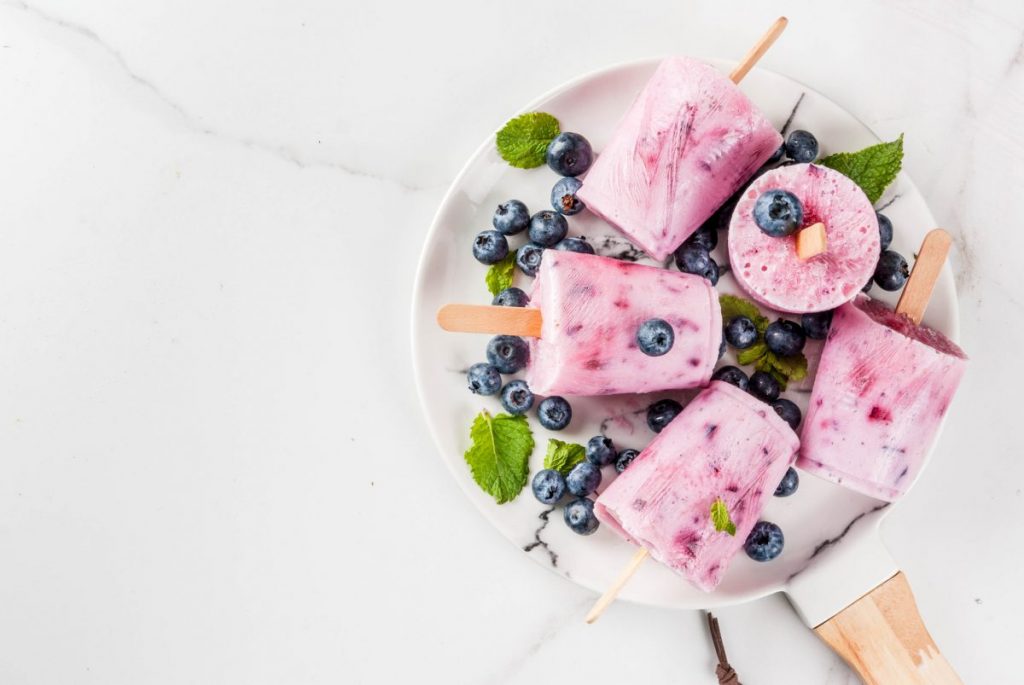 How long does yogurt last in the freezer?

Great news for frugal yogurt lovers — when you freeze yogurt, you can extend its shelf life by four to six months! For best quality, one to two months is recommended, but as long as it’s consistently stored at 0° F or below, it will be safe to eat almost indefinitely. Just make sure you write the date you’re putting it in the freezer with a permanent marker to remind yourself how long it’s been in there! 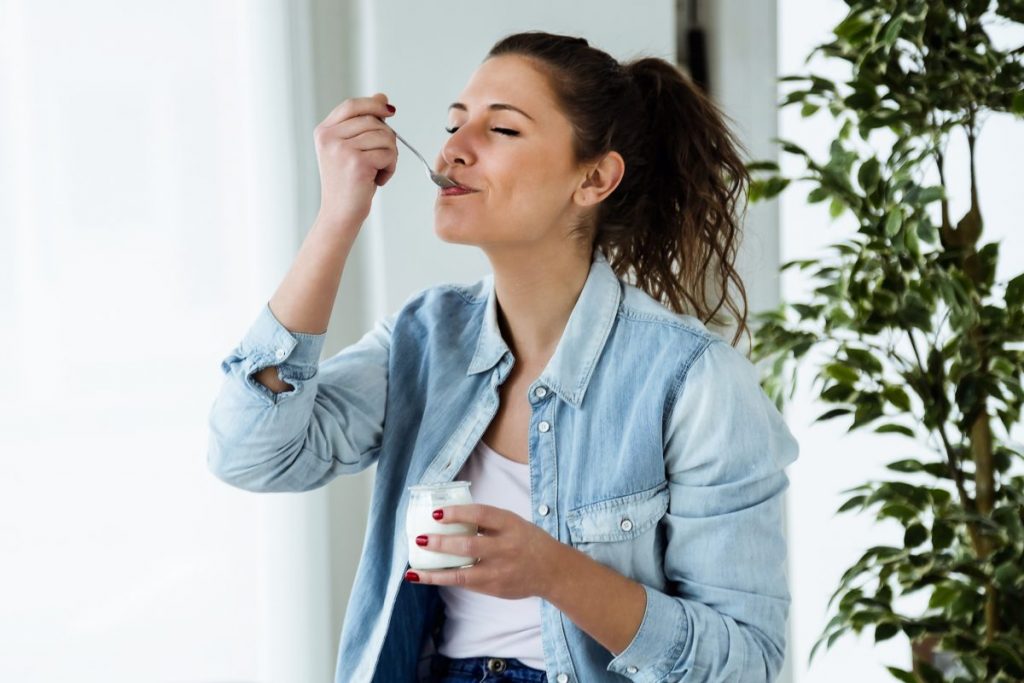 How long does yogurt last after it’s been frozen and thawed?

Once you’ve thawed yogurt that’s been frozen by transferring it from the freezer to the refrigerator, it should be good an additional three to four days in the fridge before you’ll want to use it. If you’ve used the microwave or cold water to defrost it, however, you should use the yogurt pretty much immediately. 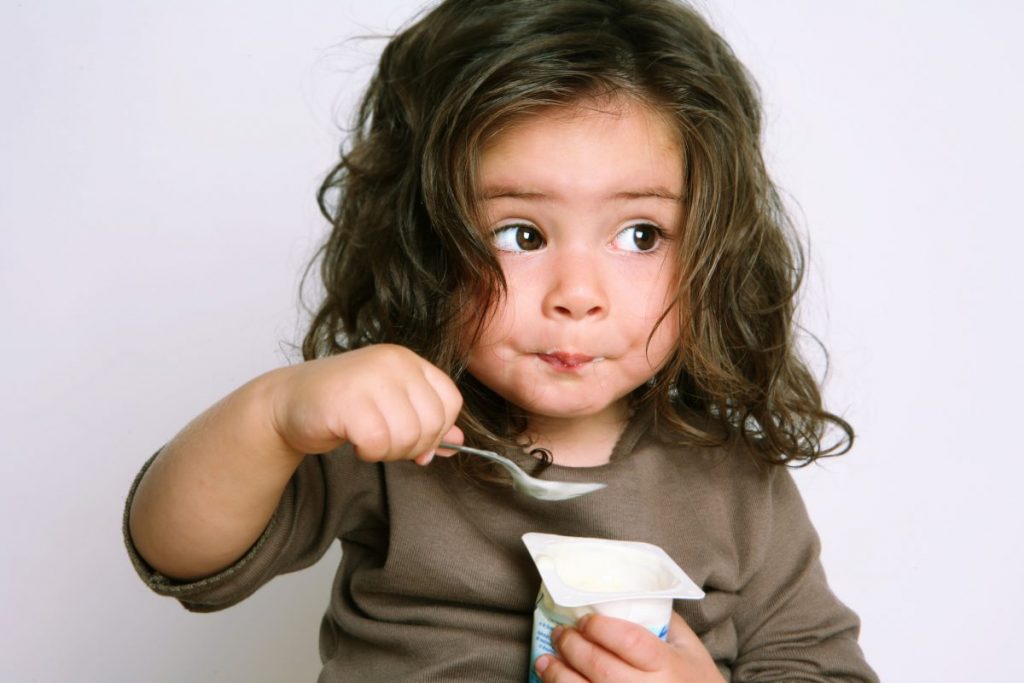 Can I freeze Greek yogurt?

Greek yogurt is certainly having its heyday and is currently one of the most popular dairy products on the shelves right now. It’s thicker and more concentrated than regular yogurt because it’s strained three times and most of the liquid is removed, meaning it packs a bigger nutritional punch into every bite. But even though it contains less water and is more protein-rich than traditional yogurt, unfortunately, the same rules apply — freezing and thawing Greek yogurt will damage its texture and consistency. 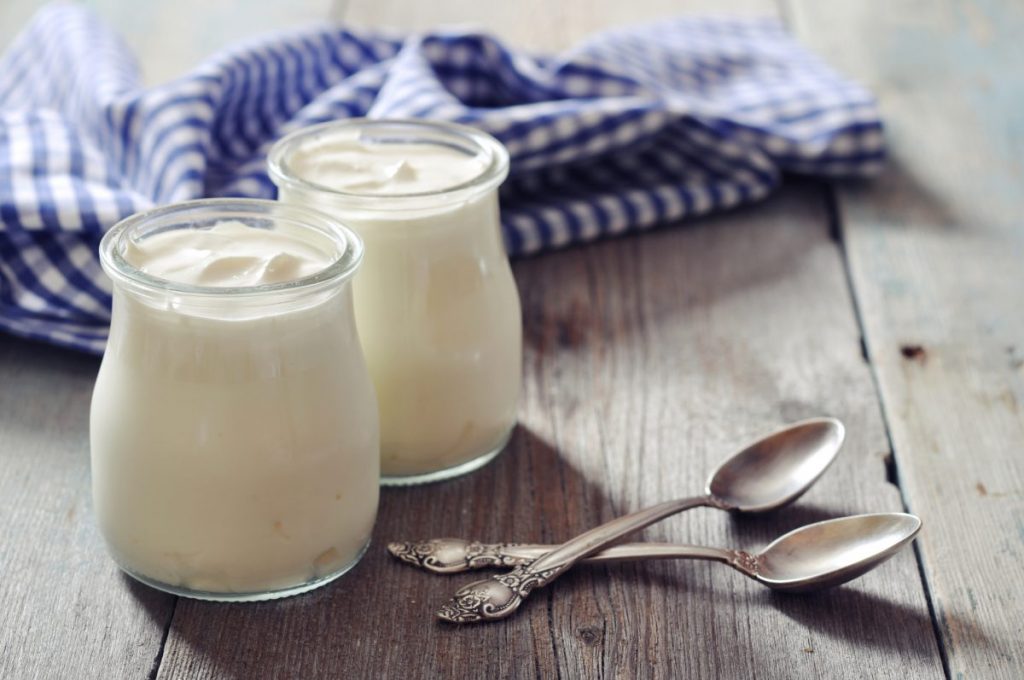 Can I use yogurt that has been frozen in cooking?

Definitely! Previously frozen yogurt is a seamless swap for fresh yogurt in any cooking or baking recipe that calls for it, especially when you don’t need a yogurty texture. However, in uncooked recipes, or where a smooth texture is required, fresh yogurt is always going to be your best bet. 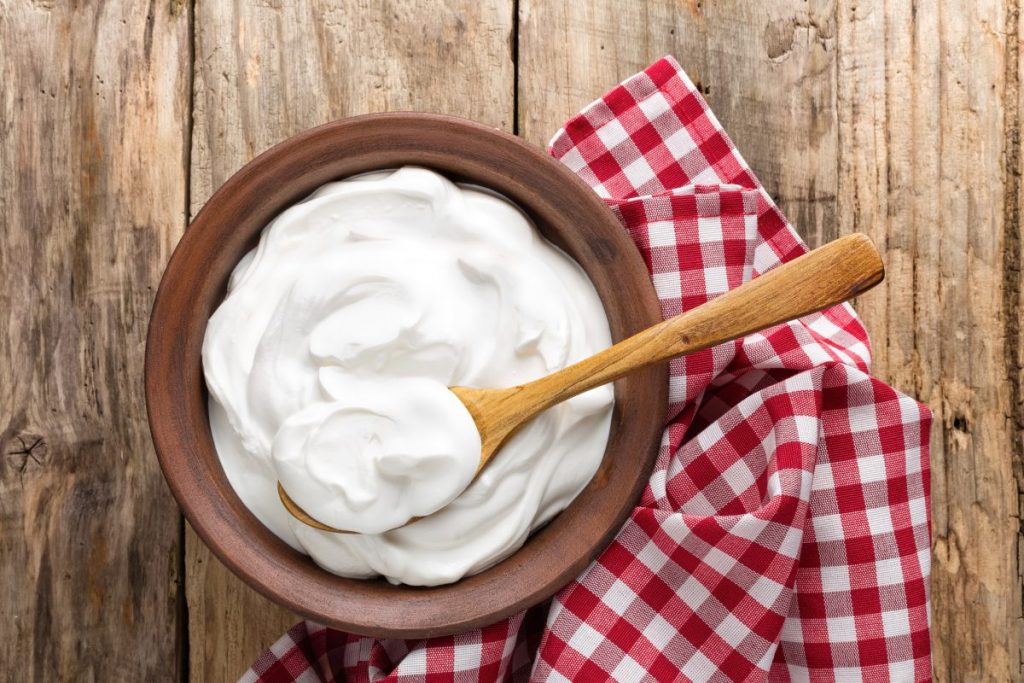 How do I freeze yogurt?

If you buy yogurt in bulk rather than in individual containers or have made homemade yogurt yourself, it’s really easy to freeze it in individual portions. Give the yogurt a good stir, then line a baking sheet with parchment paper and use a small scoop to portion it out just like you’re making cookies, leaving about half an inch to an inch of space between each scoop. Leave the baking sheet in the freezer overnight, and when the balls of yogurt are frozen all the way through, transfer them to a freezer-safe container and pop them right back in the freezer.

If you intend to use the yogurt for fruit smoothies, you can also put dollops of yogurt into ice cube trays. You might want to even add berries. Be creative! 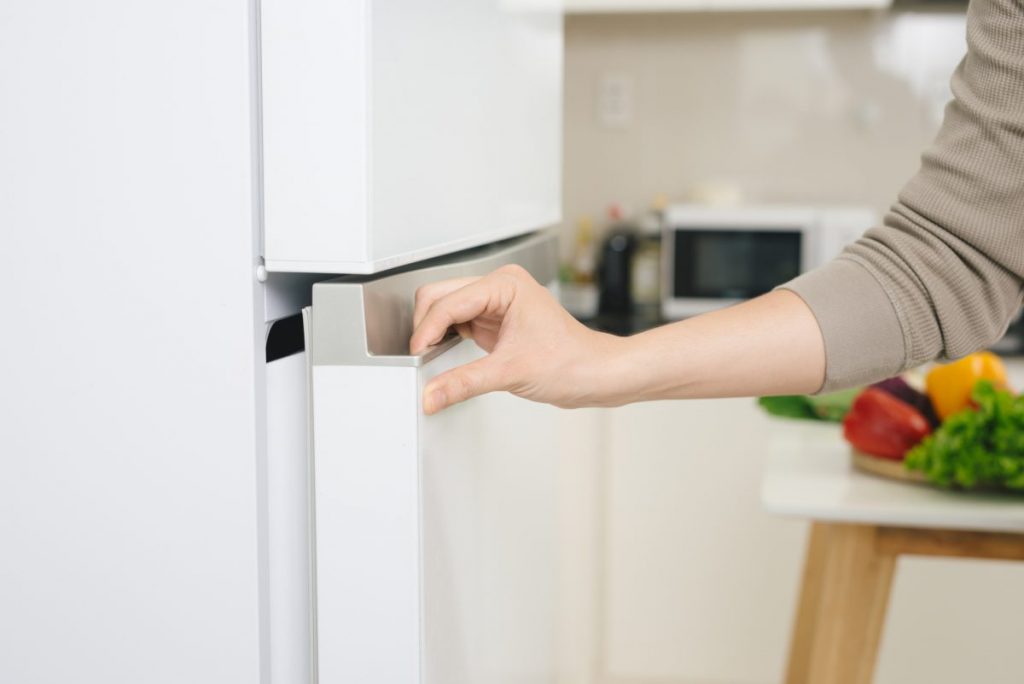 It’s no big secret that fresh yogurt contains billions of live, active cultures called probiotics which are excellent for strengthening your digestive tract. In fact, that’s one of the best reasons to eat yogurt in the first place. But what happens to all these friendly bacteria in yogurt when you freeze it? You might wonder if there’s any point in freezing it at all if this major health benefit is canceled out. Well, the good news is, research has shown that the freezing process doesn't damage the beneficial bacteria in yogurt at all. It might slow the cultures down, or they might even go dormant — but it won’t harm them. That means eating yogurt that has been frozen is just as good for you as eating it fresh. 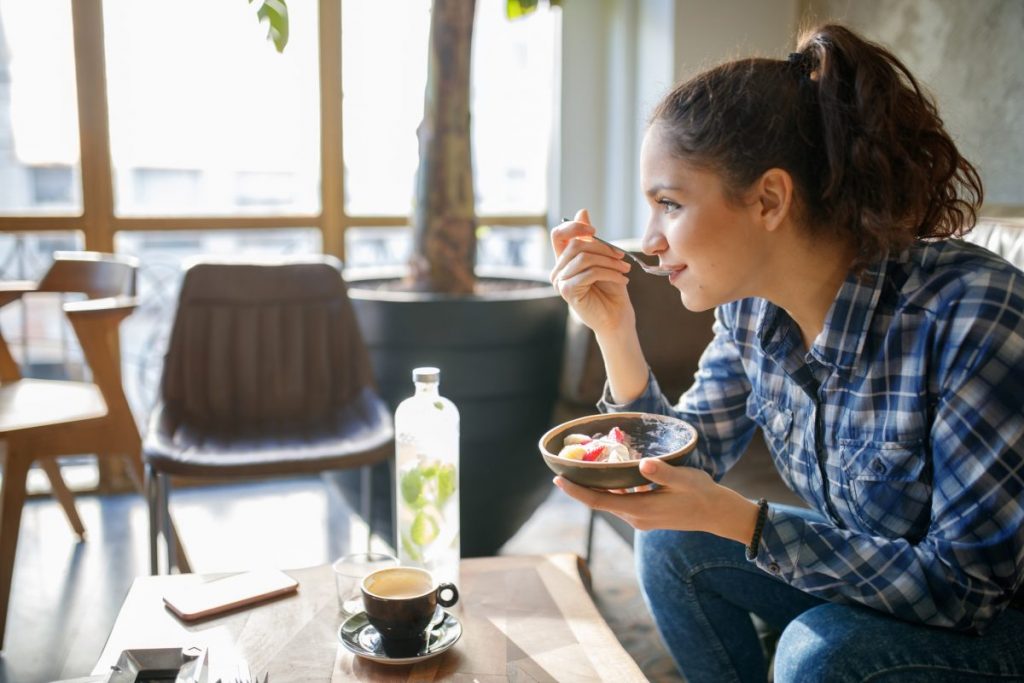 How do I enjoy yogurt once it’s been thawed?

If you’re determined to enjoy defrosted yogurt on its own, or in a recipe where a smooth consistency matters, you can try to recreate the texture somewhat by using an immersion blender. It’s a time-consuming process, but if you’re patient, you might luck out and end up with yogurt that is creamier than it was initially. For the most part, however, thawed yogurt is best in cooking, baking, and marinades. 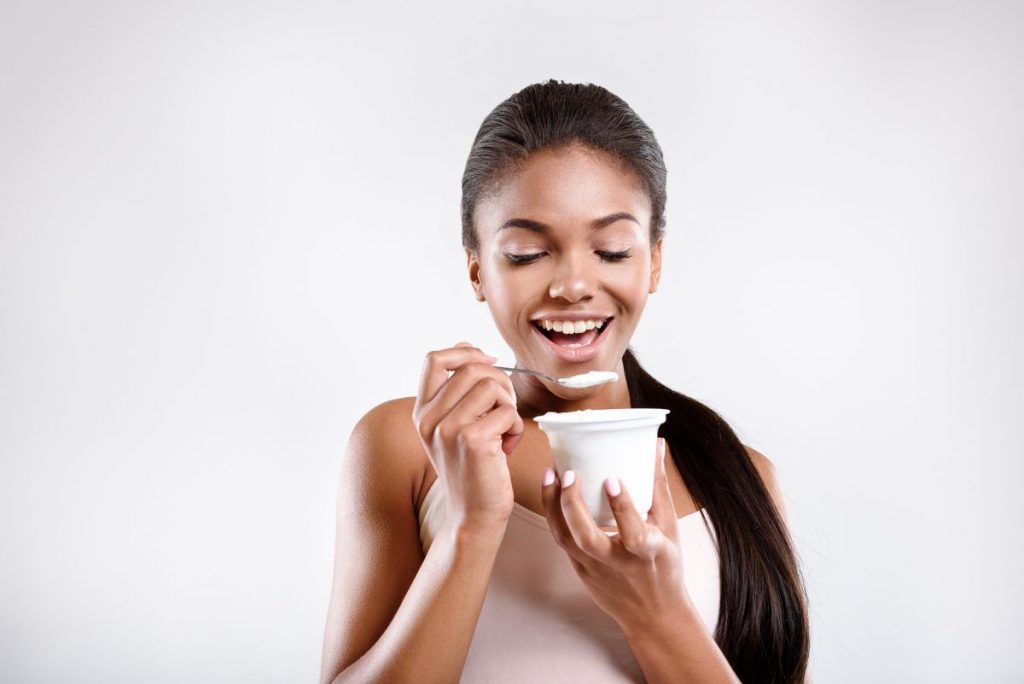