Who Built the Pyramids of Giza and Why?

The Pyramids of Giza were once named one of the Seven Wonders of the World. The site received the United Nations Educational, Scientific and Cultural Organization World Heritage site designation in 1979. These structures were built starting around 2550 B.C. The pyramids were built to last forever and have already made it through 4,500 years. The size and shape of these pyramids lead many people to wonder how and why they were built.

Location of the Pyramids

The Pyramids of Giza are located on the west bank of the Nile River in northern Egypt close to Cairo. They were erected on a rocky plateau that forms a solid base. It is estimated that the construction of the largest one took approximately 20 years. The best guess as to how they were built is with a system of ramps that encircled embankment around the pyramid that rose as the structure increased in height. Regardless of how they were constructed, they show a valuable glimpse into life during the life of the pharaohs. 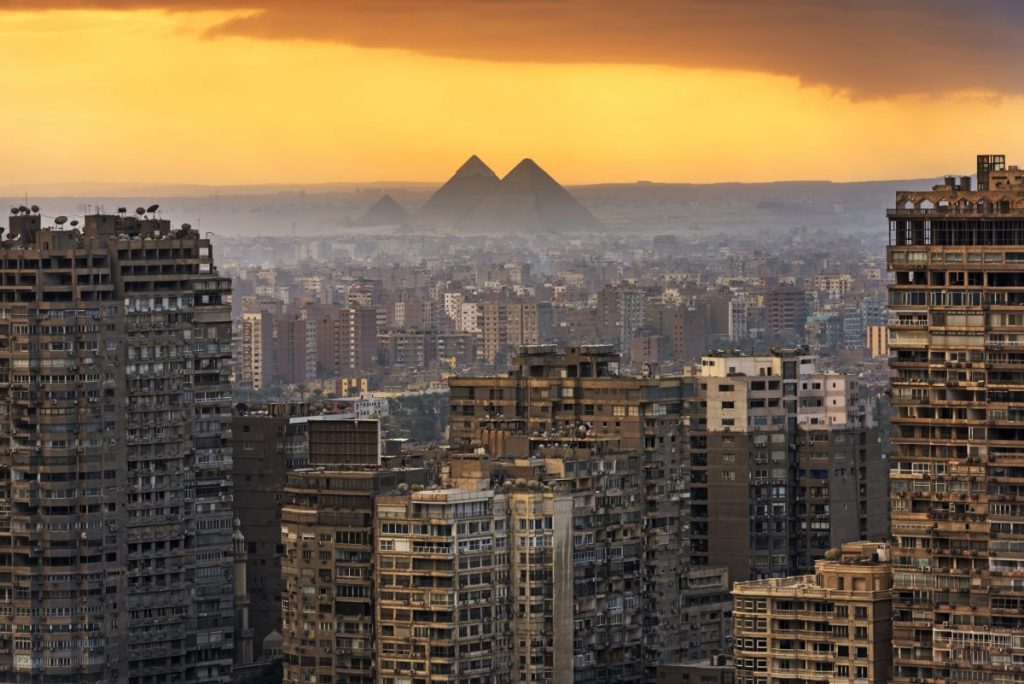 There are three pyramids here. Each is named for the pharaoh who had it built. Each is a bit smaller than the one built prior to it.

Approximately 100,000 men worked on the largest pyramid, living in temporary cities surrounding the work site. Some workers, around 20,000, lived in the encampment permanently. 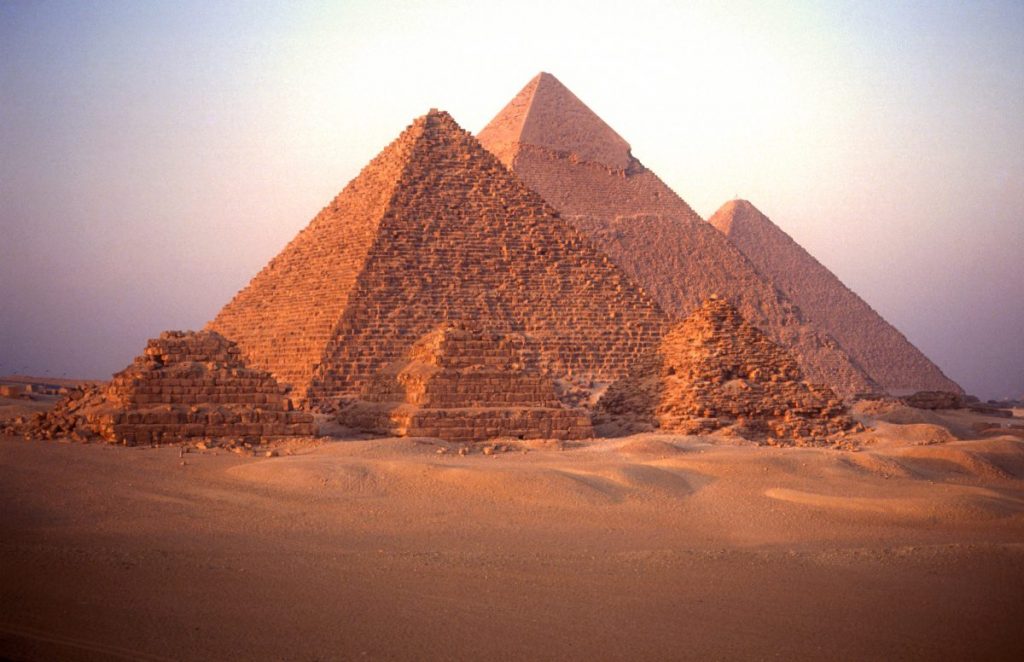 The Egyptians believed that the pharaohs were going to become gods in the afterlife and so they had pyramids built to prepare them for it. Once they were built, everything the ruler would need in the afterlife was placed inside of it. Part of the construction was the decoration of the structures to provide information about how the pharaoh lived and died. When the ruler died, he was entombed inside it. 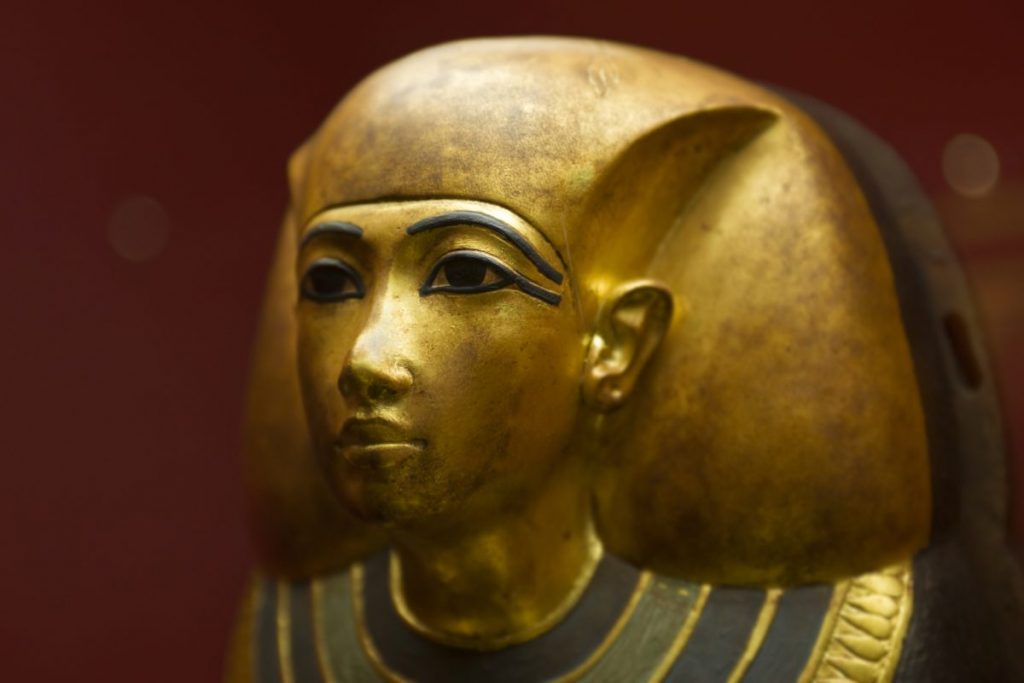 Historically, the three pyramids have been a site of theft. As far back as medieval and ancient times, people have been plundering the outside and inside of the structures. Many of the items originally placed in the pyramids are missing, and much of the outer white limestone casing is gone. The removal of the outer casing is the reason the pyramids don’t stand at their original heights. Khufu now stands 451.4 feet, which is considerably lower than the original height of 481.4 feet. You can see a bit of the limestone casing at the topmost portion of Khafre. 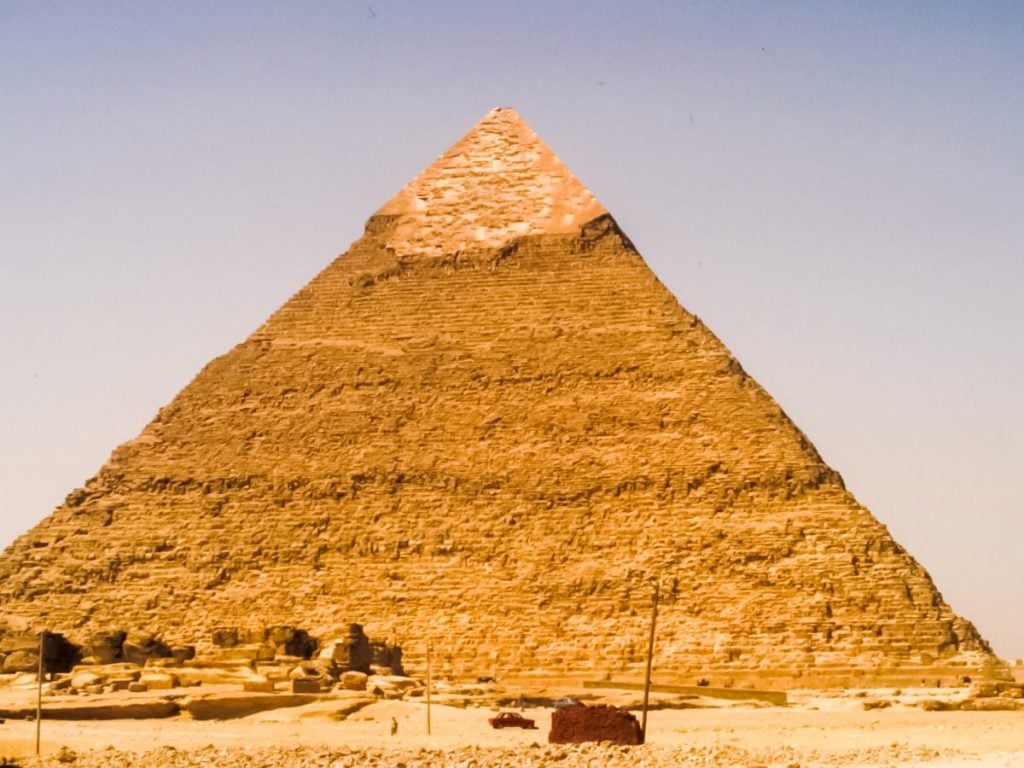 Each pyramid has a core, which is comprised of yellowish limestone. A light-colored limestone lines the passages, but the burial chamber is lined with granite. The largest pyramid took approximately 2.3 million stone blocks. Each of these was arranged in a specific manner so that the sides of the structure rise at a set angle and so they point to the cardinal points of a compass with the entryway located on the north side of the pyramid. Each chamber in the pyramid had a ventilation shaft, which may have had a religious purpose. 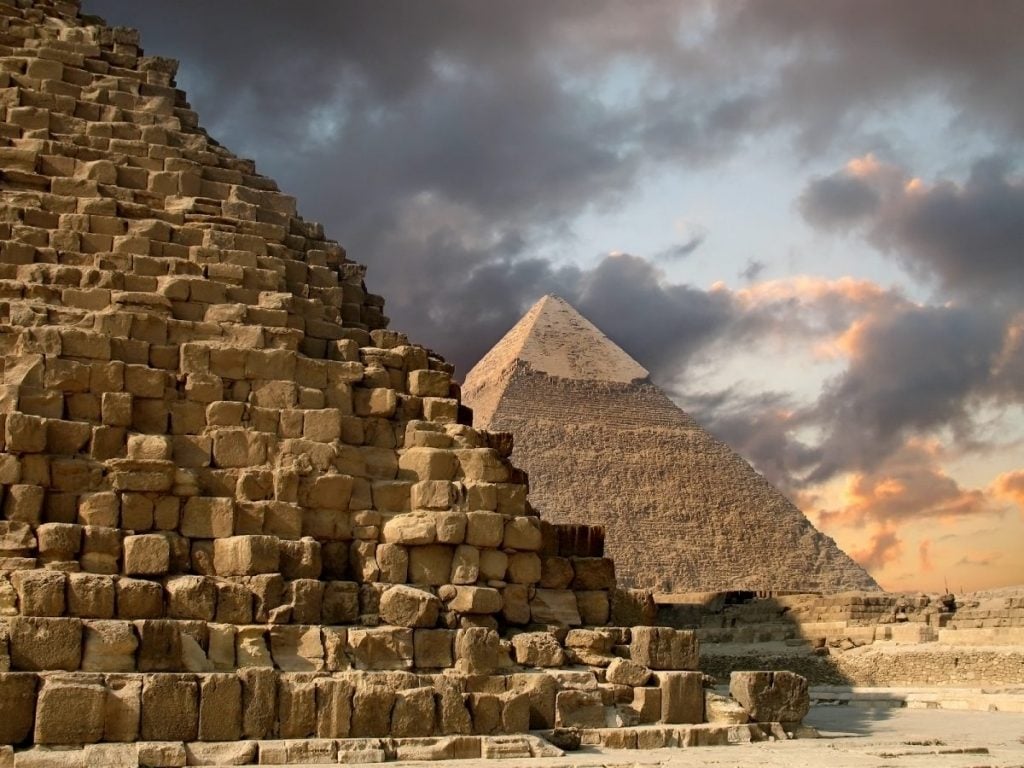 Chambers in the Pyramids

The pyramids have multiple chambers. The highest of these was the King’s Chamber. Below the King’s Chamber was the Queen’s Chamber. The Grand Gallery links these two chambers. An ascending passageway connects the Grand Gallery and the entryway. A descending passageway links the subterranean chamber with the entryway. Some pyramids also contained other chambers, depending on the pharaoh’s instructions and beliefs. 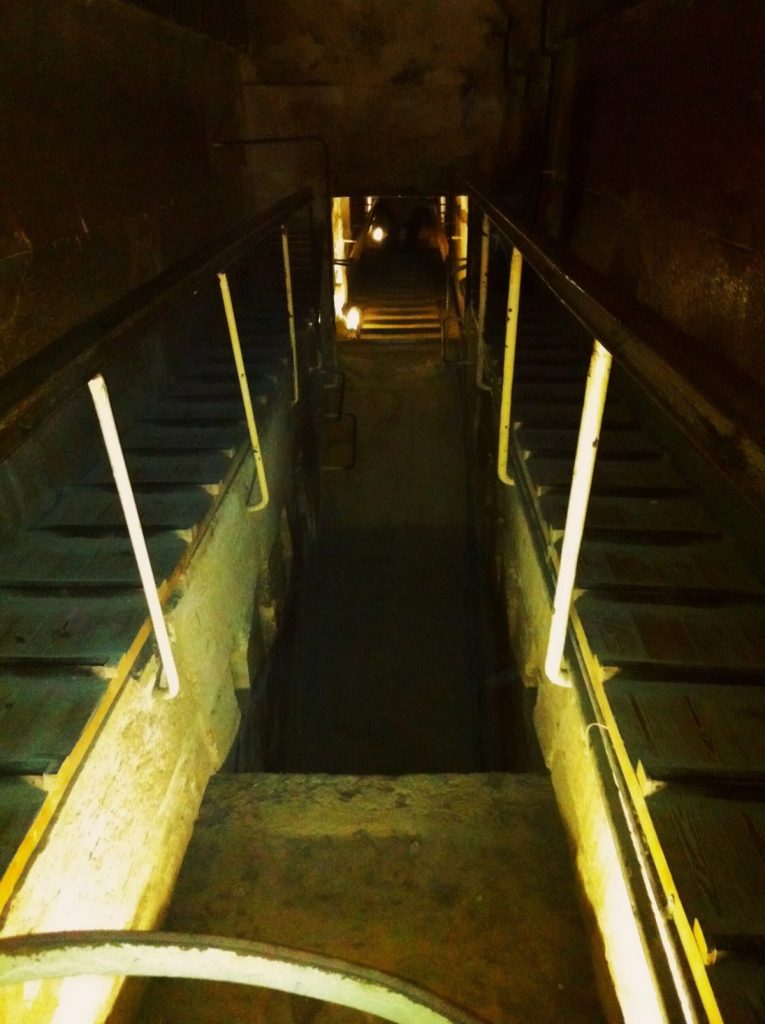 Around the pyramids are a series of mastabas, which are funerary structures. They are arranged in a grid and were used to bury the officials and family members of the pharaohs'. Interestingly, the mastabas around the Pyramids of Giza aren’t only for the 4th dynasty. Mastabas have been found from the 5th and 6th dynasties. These tombs sometimes included statuettes. Inscriptions on the walls were sometimes present to identify the person buried there. They were sealed with mud once the burial was complete. 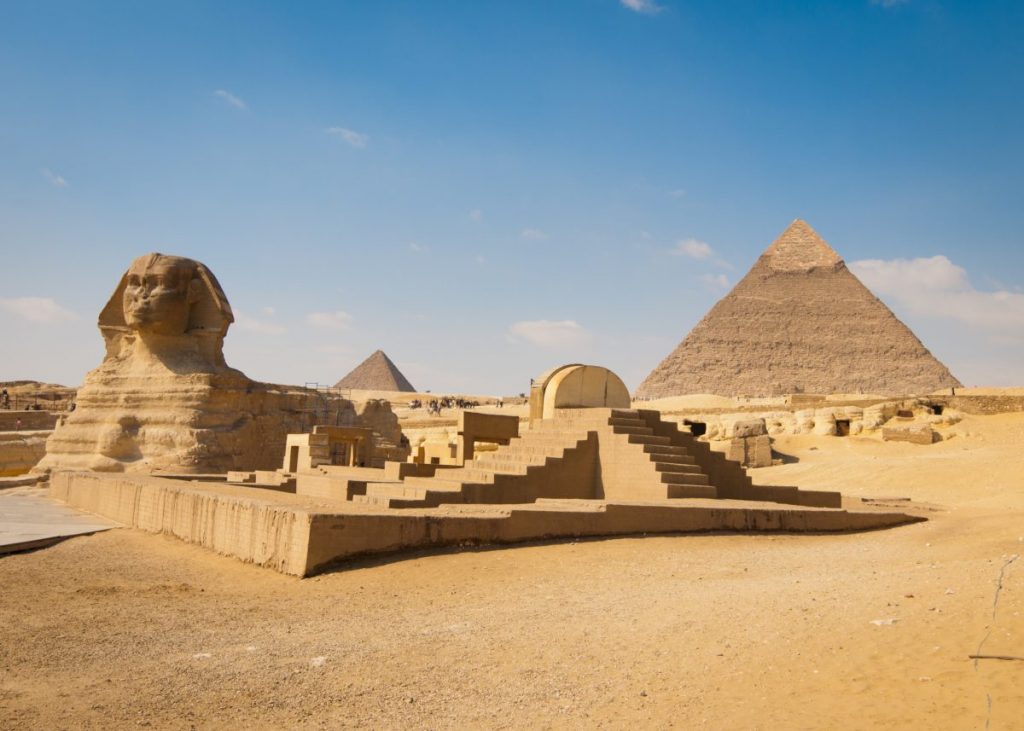 Each pyramid and some of the structures around them contained hieroglyphics, which is a written form of communication that uses pictures and symbols. It was developed around 4000 B.C. The signs are divided into categories: alphabetic signs, syllabic signs, word signs, and determinatives. Together, these enable the person who is writing the hieroglyphics to relay a full message to the person who is reading it. Writing out messages in hieroglyphics took considerable time, so there was an abbreviated form known as hieratic that was used in daily business. 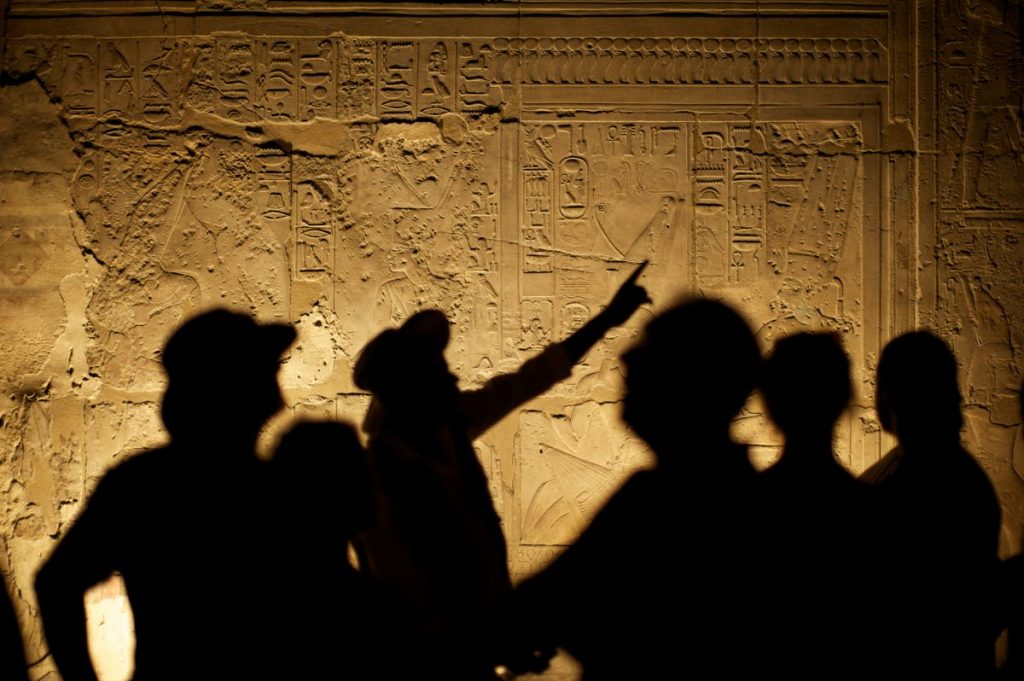 The Great Sphinx was erected in front of the Pyramid of Khafre. The 66-foot tall structure consists of nearly entirely of limestone. It has the body of a lion and the facial features of a man. The one in front of the pyramid is complete with a headdress. In the ancient Egyptian culture, the sphinx was a spiritual guardian, which might account for the reason why one was erected in front of the pyramids. There is some red marking on the Great Sphinx, which suggests that it might have been painted at one point. That has since worn off. 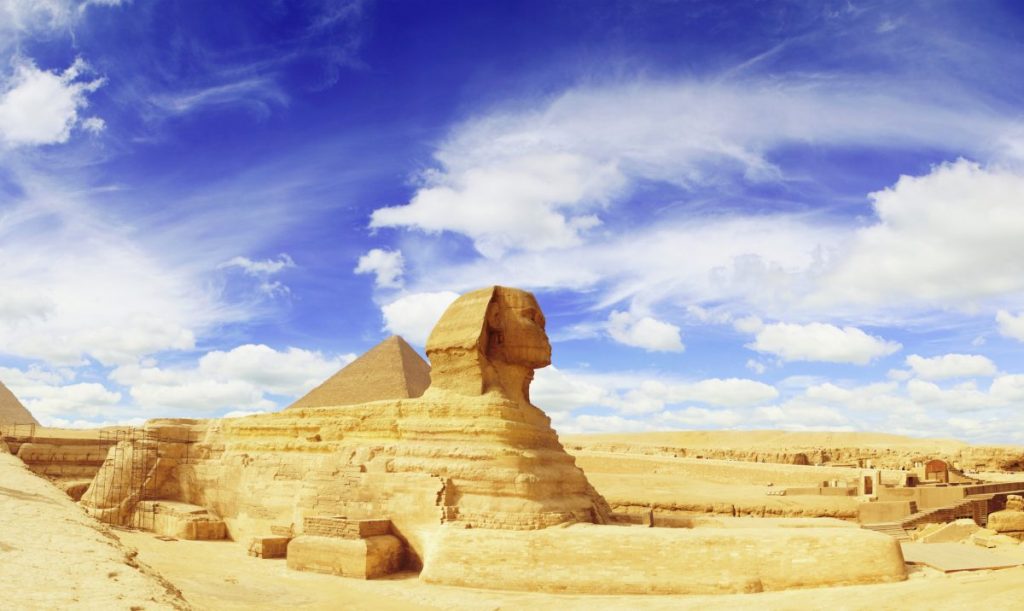 Tourism and the Pyramids' Future

The Pyramids of Giza are a huge tourist attraction. This, coupled with the political unrest of the area, has led to the decline of the pyramids. There are some very strict rules that visitors must follow. You must be prepared for a strenuous training process if you are going to go inside the pyramids. Inside the structure lays narrow walkways and stairs, as well as high temperatures and poor circulation. The stench of mold and the smell of decay can often be strong. Keeping the pyramids up will take considerable work, but it is unclear if this will happen. 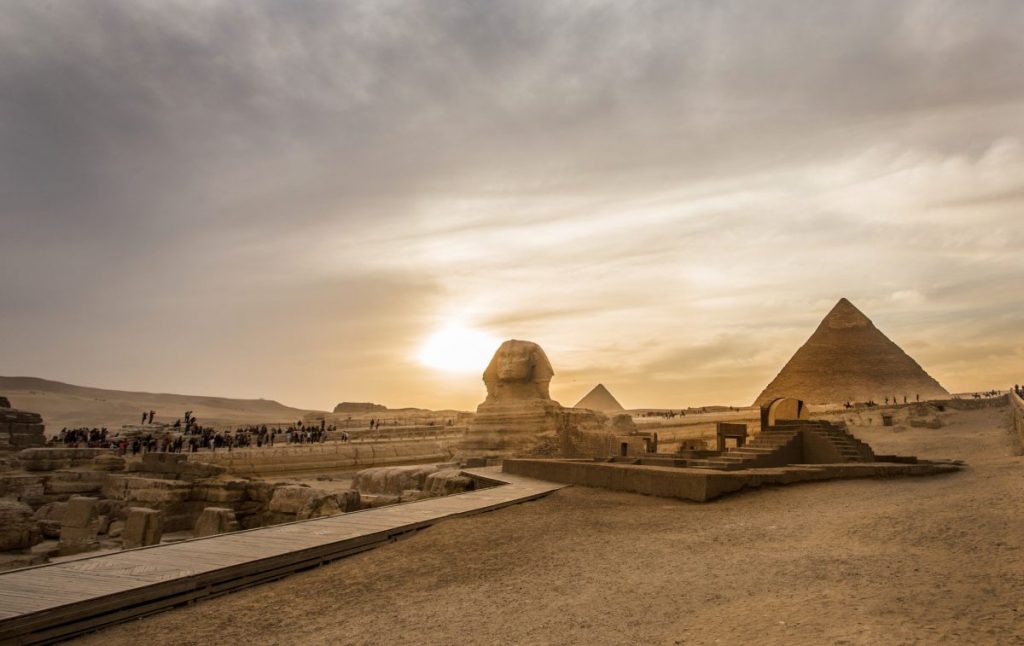