These Cheugy Vintage Ads Are Past Their Prime

Today's advertising campaigns aren't perfect, and scandals still crop up, even for brands with massive PR teams and access to tools like focus groups. Still, the industry has come a long way since the mid-20th century. Sexism, racism, and the promotion of drinking and smoking without any consumer warnings were common in the media. Companies got away with marketing strategies that would get the axe today. Looking back at the adverts of old, you'll glimpse the fashions and ground-breaking trends, but also the rampant misogyny and lack of protection for various segments of society. These eye-catchingly offensive vintage ads aren't just interesting if you enjoy history; they're a timely reminder that our hard-won modern values and culture are worth safeguarding.

Who Are You Calling Chubby?

Lane Bryant is still in business today, but the company has, not surprisingly, rebranded its product line to something other than "Chubbies."

Very few doctors smoke these days, and none of them promote cigarette smoking if they want to keep their medical license.

If He Wants Cake, He Should Bake It!

A Kitchen Aid is a sweet kitchen luxury, but these days, women who own them don't owe men homemade cake.

Poison and fresh produce don't pair very well these days. DDT is illegal, so this advertisement would not have a chance today.

This Is Just Down-Right Rude

Women are not the root cause of STDs, but you wouldn't know it from this ad! 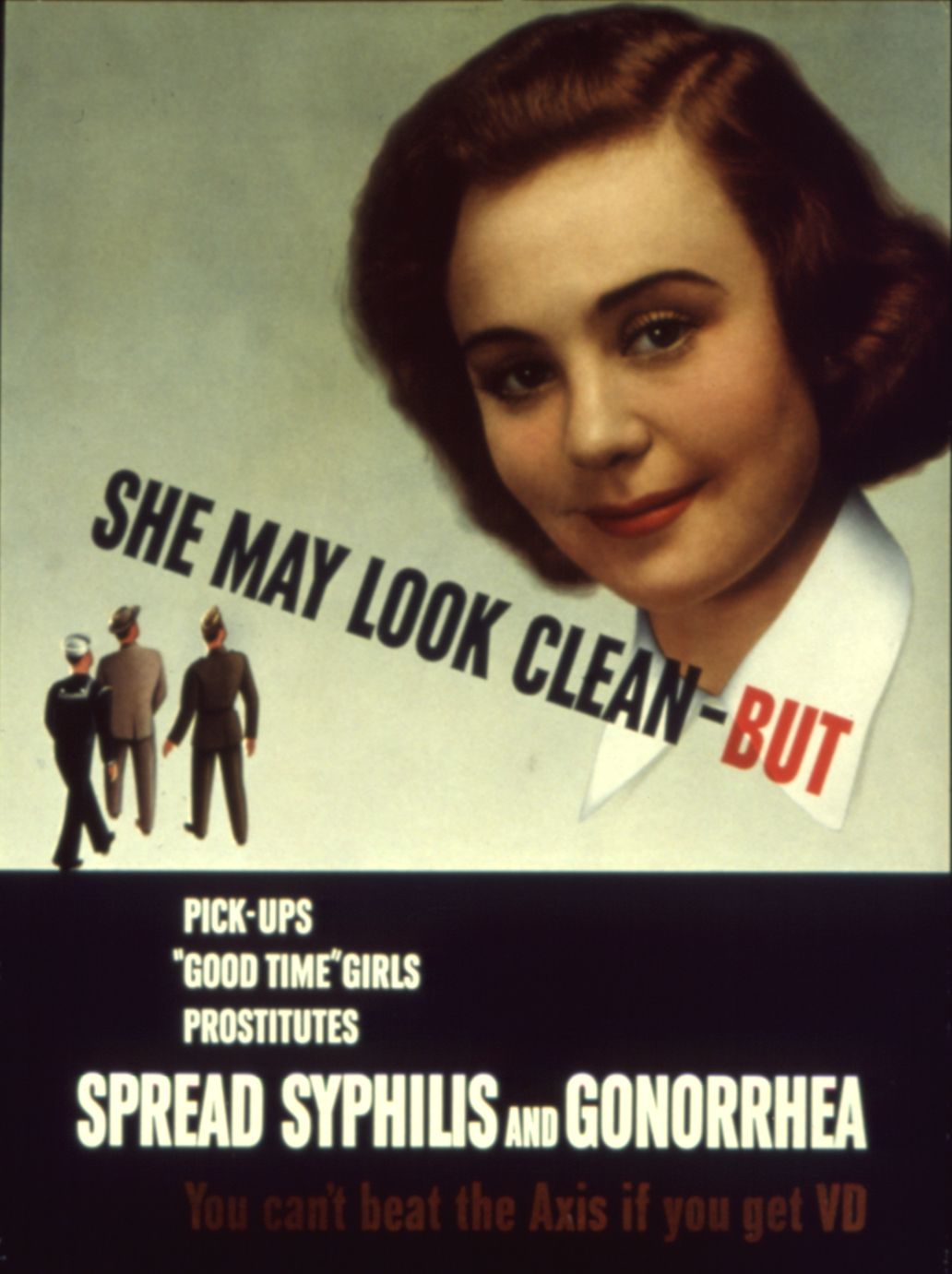 Once upon a time, gay meant happy, but running this ad today would raise some eyebrows. Obviously, you don't have to be gay to enjoy what this ad's selling.

It's unclear what this ad is selling. It looks like it's promoting suicide.

Was it the blatant racism or wacky claims that put this manufacturer out of business?

Promoting Female Rivalry One Ad at a Time

Scaring women with thoughts of infidelity does not have the makings of a power-selling campaign.

When Busty Was Best

Crazy contraptions were all the rage once upon a time. You won't find this one on the market today.

Get These Babies Some Air!

Cellophane might be ok for your leftovers, but it should never, we repeat, never top a child's face, or it can prevent them from breathing. This company ran several ads with babies. What was it thinking?

Babies and razor blades? Believe it or not, the company probably paid a lot of money for that creepy ad back in the day.

It's important for advertising executives to consider every possible meaning associated with a slogan. Clearly, these executives wanted to get the ad done and get to lunch.

A Cup of Domestic Violence?

Today, purposely ingesting a parasite is cause to visit your local mental healthcare provider.

Clearly, ad executives in the fifties and sixties endorsed the idea that women belonged in the kitchen.

This ad proves that no language or culture is immune to poor taste.

Tab soda thought it was a good idea to tell women that they'd matter more to him if they stayed skinny. Way to promote eating disorders, Tab.

People still raz Tampax for this piece of advertising nonsense.

This ad wouldn't meet with approval today--unless she was pouring hot coffee in his lap!

There's only one woman in this ad's workplace, and she's taking notes and answering phones.

Getting Beautiful Is a Pain

This scary-looking beauty gimmick was just a lawsuit waiting to happen.

The Racially Insensitive Past

Not only is this ad sexist, but also blatantly racist. Ads like this remind us that the good old days weren't always that good.

What exactly about a woman stretched tautly has anything remotely to do with power tools?

Women's mental and mood disorders are only a problem in so far that they affect men. We understand, Dr. Miles. This sexist ad diminishes mental health in one fell swoop.

With the obesity epidemic in full swing, few candy companies are urging moms to forgo apples in favor of sugary snacks.

Not a Healthy Option

Surely, this soda company has heard that breast milk or formula is better than soda. No company could get away with encouraging babies to drink pop these days. 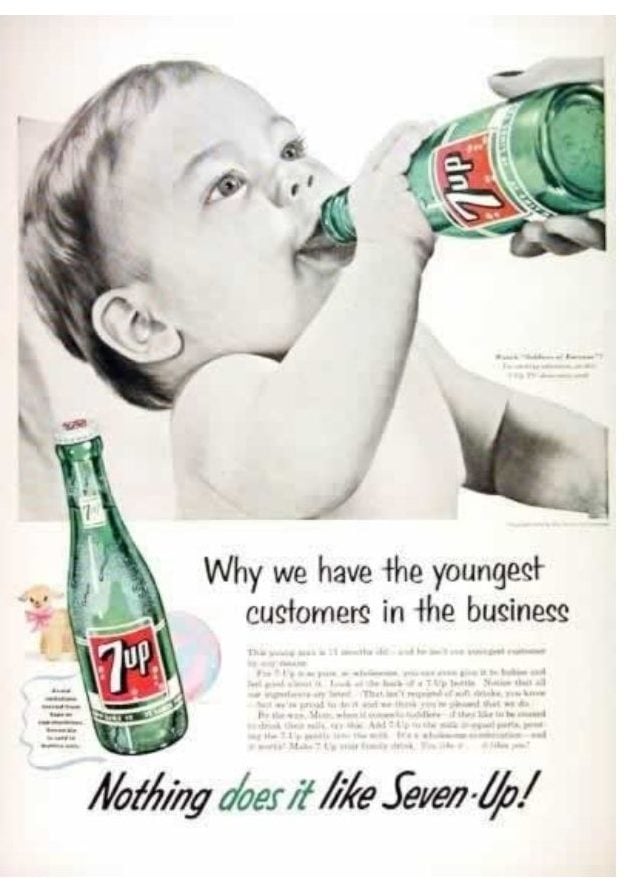 If you want to attract women, get some tailored slacks, and if the ladies become too obsessed with you, you've always got a shovel to sort that problem out. We don't know what's worse—this sexist and mildly disturbing advert or the fine print at the bottom encouraging men to use the company's Legg Gauge to check whether the "girl" in their life has perfect legs. Also, did Mr. Leggs not realize women had access to rulers and measuring tapes they could use to size men up? Way to open a can of, ahem, worms. Let's see how well he can keep his head, then. 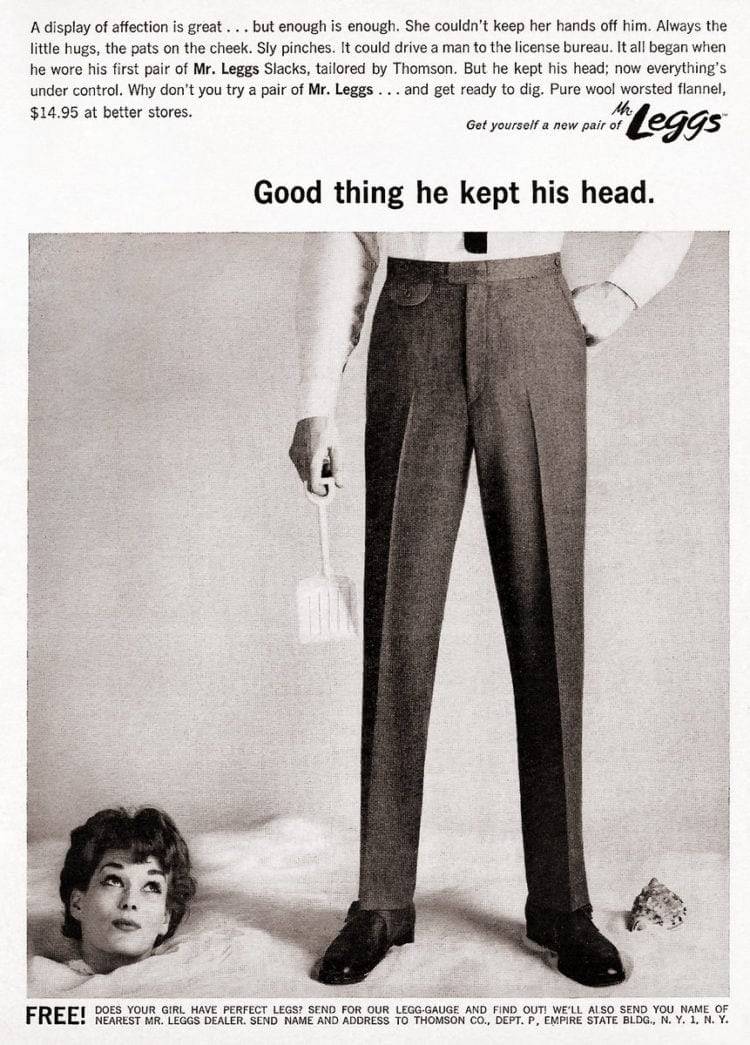 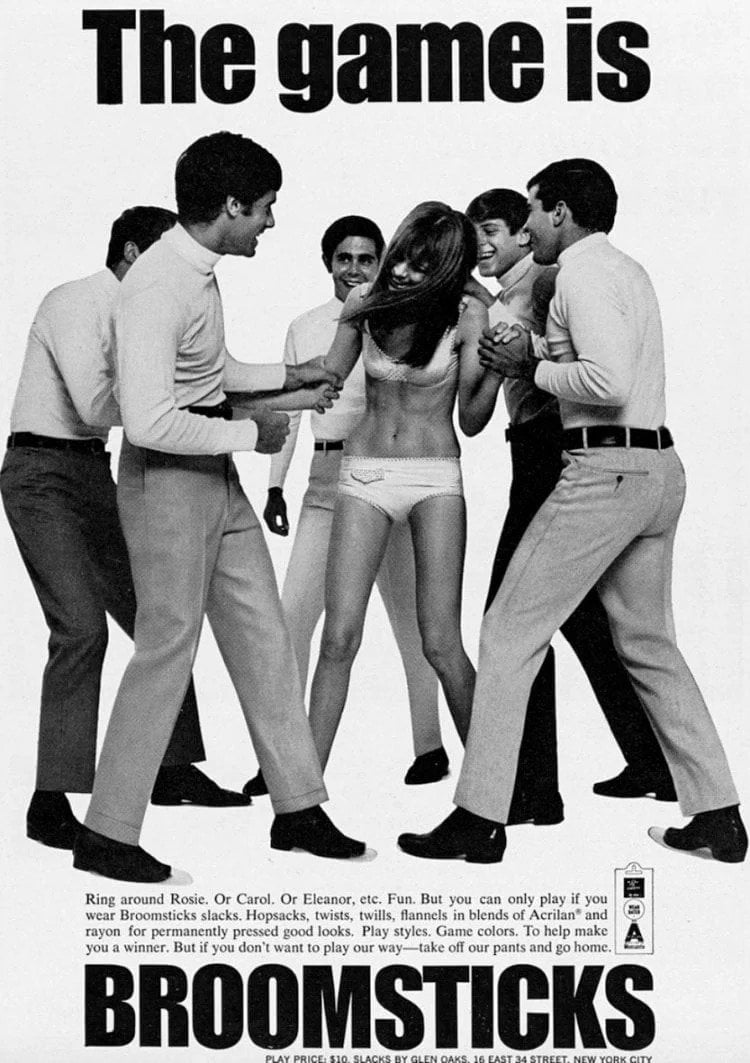 Excuse us while we laugh our heads off. Sure, some people love cleaning and baking; they find it calming. But most women then and now will not thrive doing vastly undervalued domestic work. It's tiring, nowhere near as easy as it looks, and no amount of vitamins changes that. Equating attractiveness with labor ups the cringe factor in this outmoded advertisement. 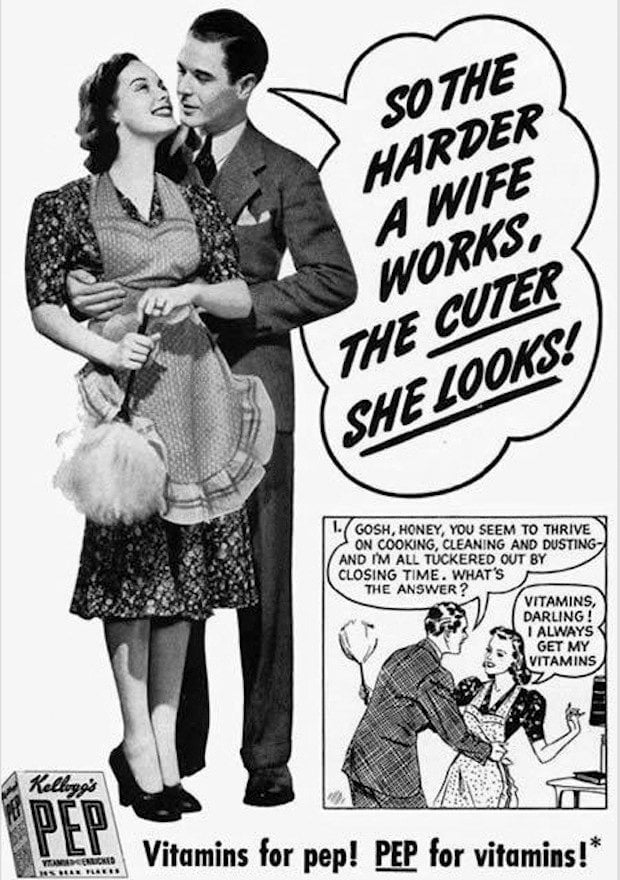 Thankfully, society has changed enough that women aren't forced to stay home only to be indebted to men. Dual-income households are par for the course, and service is a two-way street. Today, guys must put in just as much work to keep their independent ladies. But even if you are a busy home executive in the 21st century, no advert with a modicum of taste should bring up holding onto a husband or partner. Sorry, Reddi-Wip—that's a no from the modern woman. 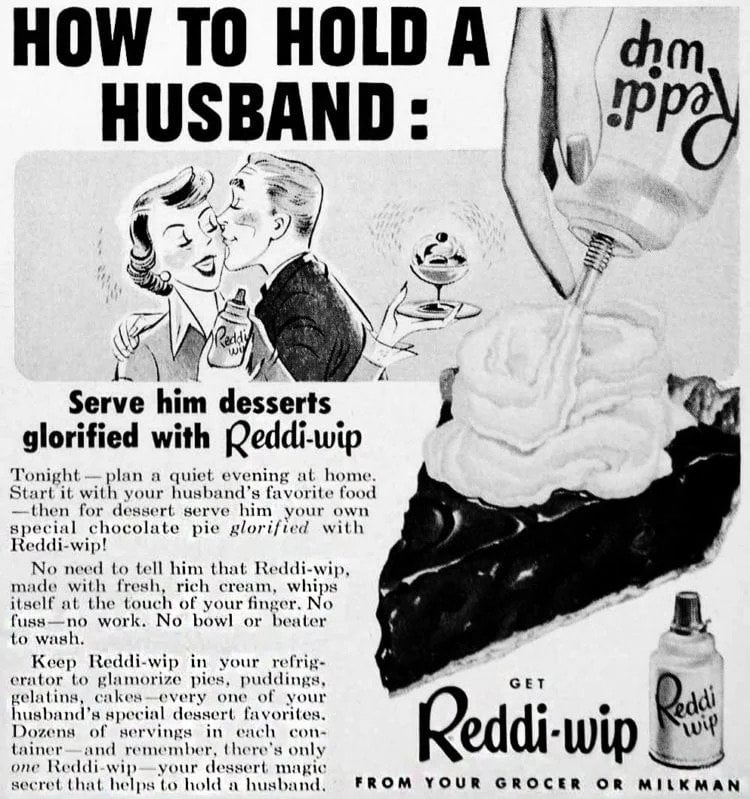 Hi dear. Did I mention that I'm an imbecilic housewife who's only smart enough to make instant pudding for a special occasion, not to know what my significant other does for work or his short and long-term career goals? This ad is just plain weird, from the big-eyed child-like expression of cluelessness to the slavish body language. Women deserved better than this claptrap. Housewives were not and are not dumb—Andy Cohen's Real Housewives will set you straight on that account. 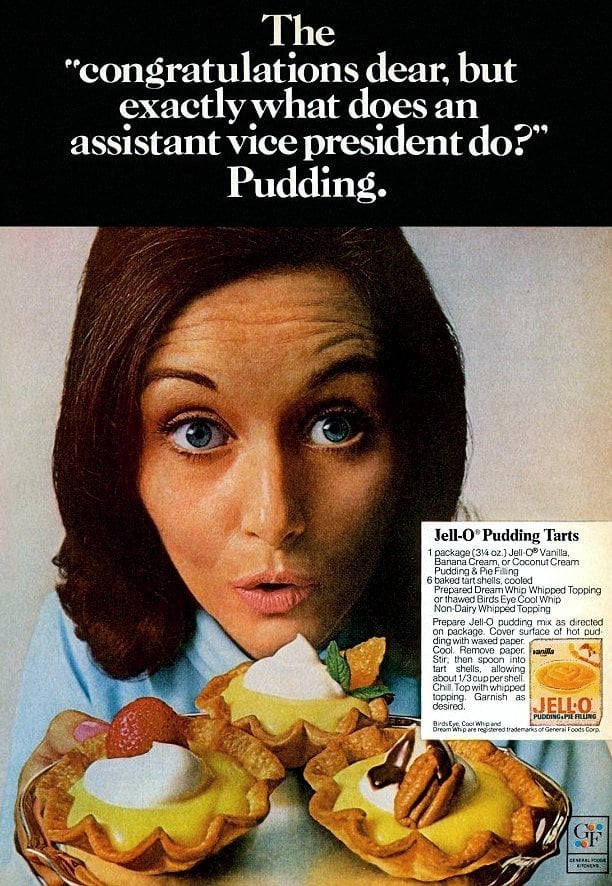 In the wake of a huge Balenciaga scandal, allow us to make it very clear how abhorrent the sexualization of children is in the advertising industry. This Lolita-esque advert is gross and, frankly, shameful when the model doesn't even look old enough to be sexually mature. Copy like "irresistible, clean-baby smell" and the teddy bear imagery doesn't skirt pedophilic territory but embraces it, and the backlash to an ad like this today would be swift and severe. That's before we get into the unhealthy fixation with a woman's innocence and purity when no such double standard is applied to men. 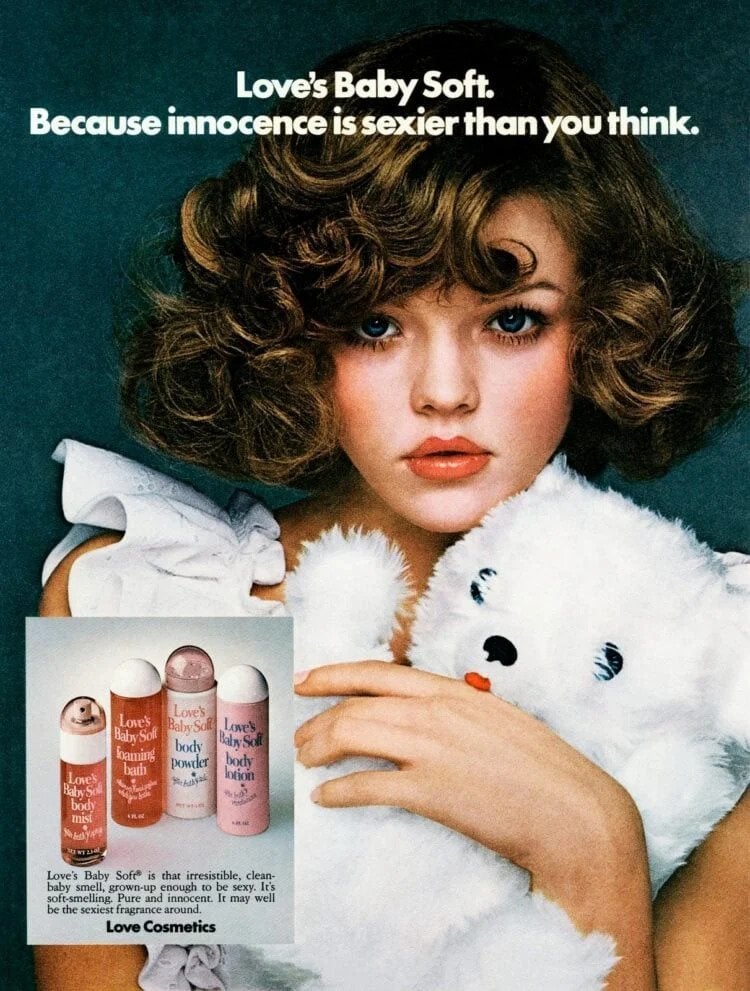 You can just about imagine the suits in a Mad-Men-like office conceptualizing this advert.

Fred: How do we capture folks' attention when they're bombarded with print advertisements? Arthur: Why we should use Betty Crocker's blood red to highlight wife-beating wordplay that very few people would find funny. David: Ha ha, great idea, boys.

Nope. Non-consensual intimate violence is not a joke, people. 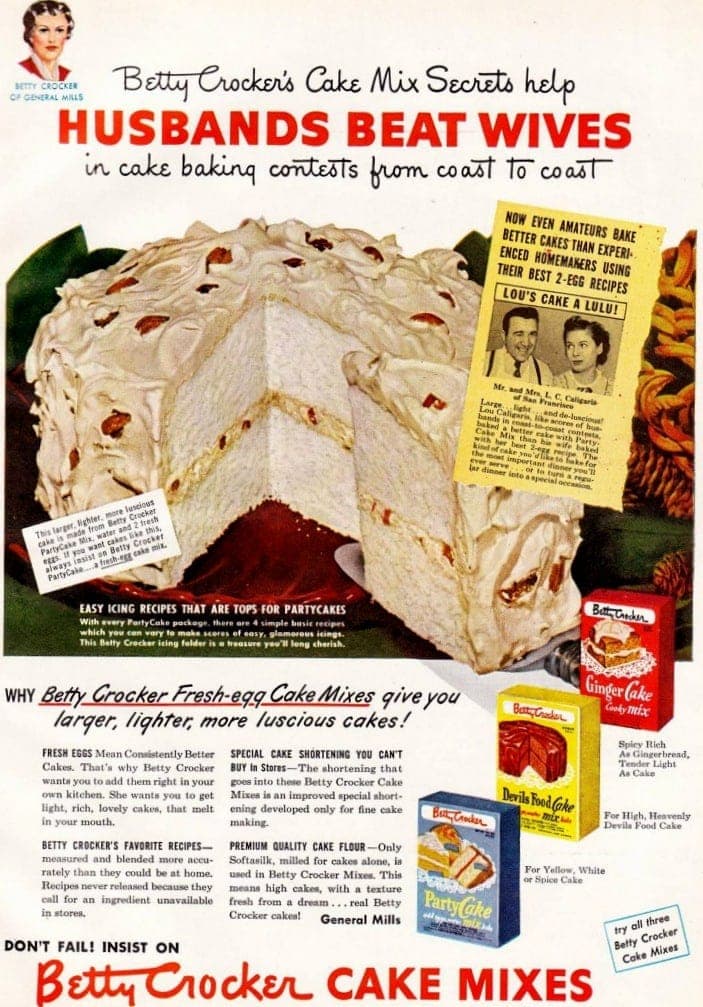 This advert was chuckle-inducing, low-hanging fruit for the time. Not so wry and hilarious today, though, huh? It has sexual harassment written all over it. Plus, Stenocord seems to have missed the punchline—the robotic, chauvinist men in the office who bought into female stereotypes were likelier to put the secretaries of yesteryear off than anything else.

A man carrying a baby and putting the dishes away? What an utterly absurd notion, says this advert, but consider it for a moment just for fun and so we can sell you our product. The efficient man, it goes on, would not let a day pass before installing a telephone in the kitchen, and nor should you, not when the kitchen is where you naturally belong and will be spending most of your days in the foreseeable future. Ha! Thank the universe for progress. 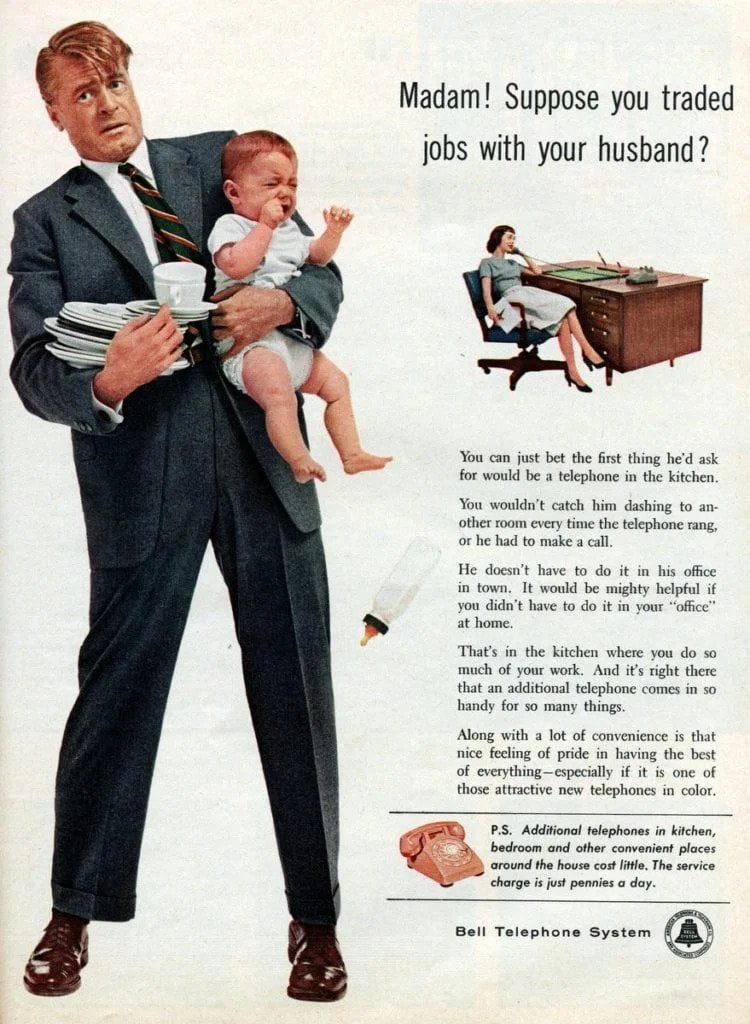 Easy doesn't do it

Honestly, there are way worse ads on this list than this Easy Washing Machine one. But the casual gendering of roles, use of language like "dumb cluck," and the psychotic edge to the father's expression are sure to rub some the wrong way. There's also more to mothering than being a maid. 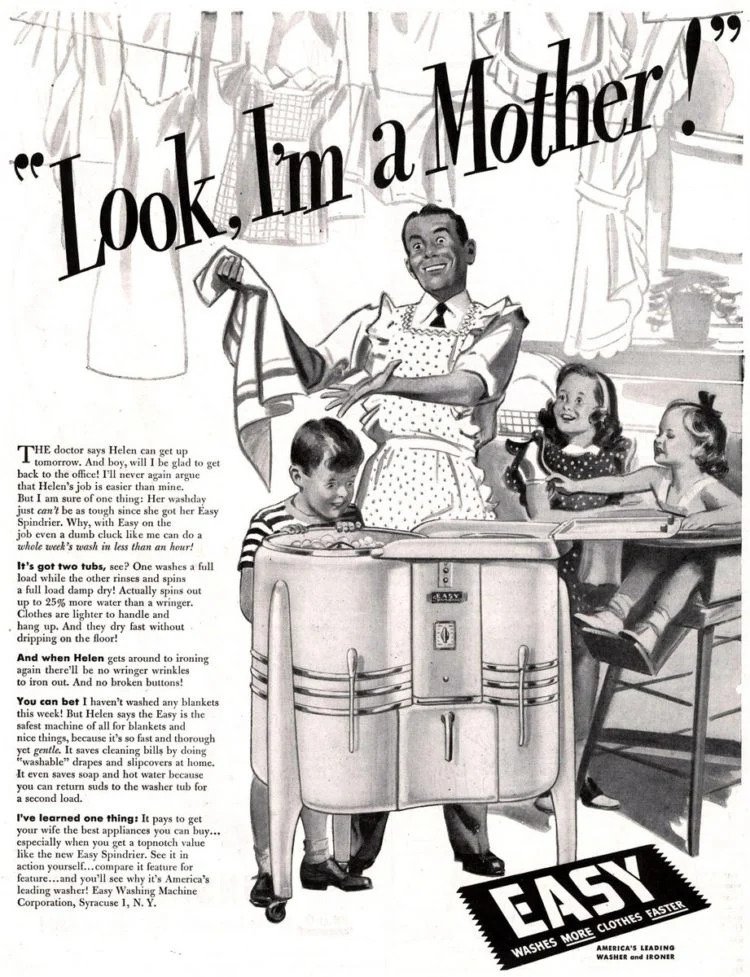 Trample all over this one

Where exactly does she belong? In the bedroom? At your feet, where you can walk all over her? This 1970s Playboy ad for Weyenberg Shoes is all kinds of eww, especially in a political environment where women were fighting for equal rights. The ad industry couldn't seem to shake off depictions of women as sex objects lacking autonomy. 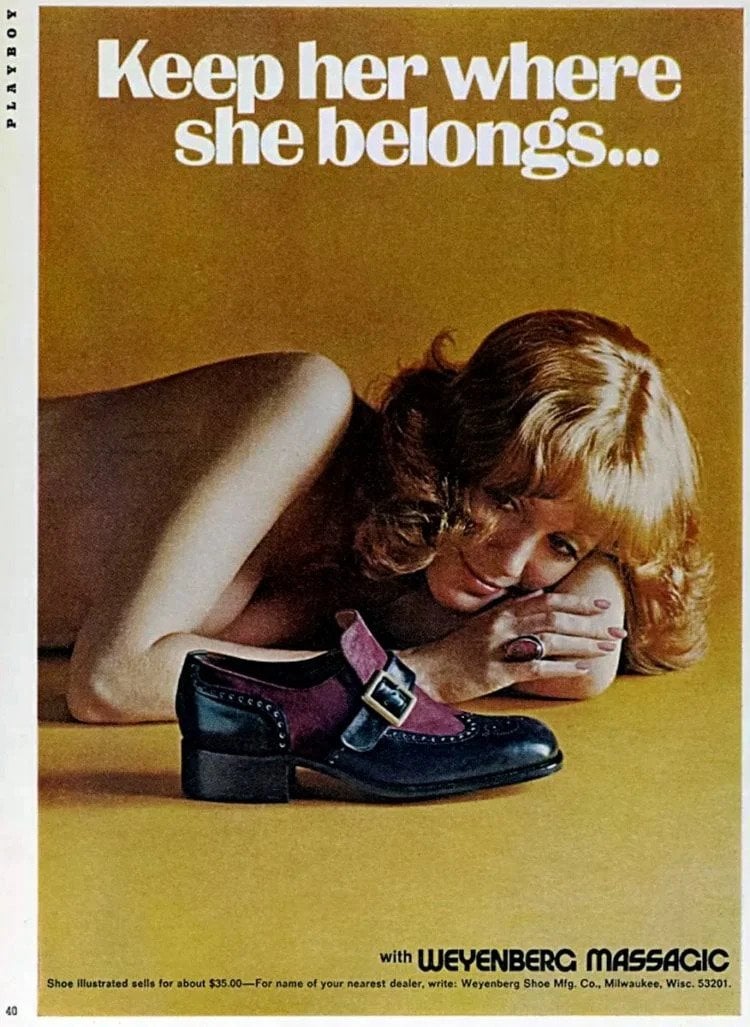 Up off our eyeballs

There's nothing subtle about this Congoleum floor product ad. It acknowledges that women have to do the dirty work with a rather large wink and pose as a savior. All it's really helping is the patriarchy. 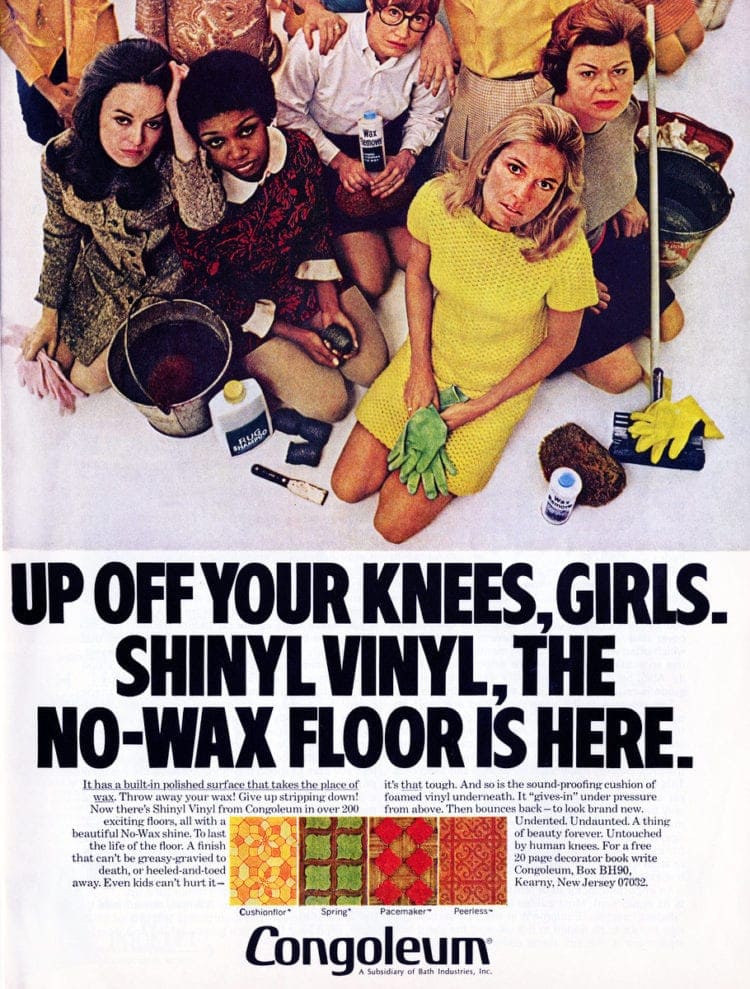 Sorry ladies, you're not macho enough for our specific brand of carcinogen. They're reserved for the manliest of men, the most macho of males. Ugh, spare us the toxic masculinity, Marlboro. Don't you wish they'd put as many filters on their ads as they did on their cigarettes? 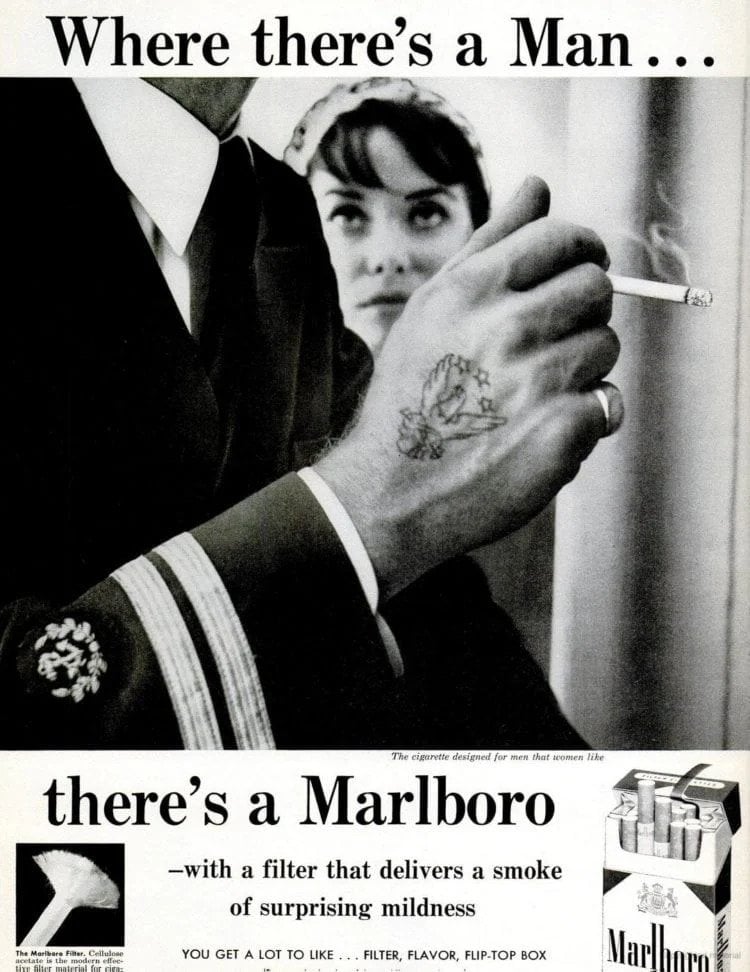 Apparently, getting a woman into bed is as easy as buying her six hair accessories, one of which is a mirror to reflect the flaws other adverts in the zeitgeist say she has. The language in these adverts never fails to make us shake our heads and say, "what a bunch of baloney."

Hear that, wives of the 1960s and 70s? Your husband is more interested in being plied with alcohol than in you, so best you supply liquor in spades if you want a poorly-executed drunken smooch under the mistletoe. It would be remiss of us not to mention how unpleasant these adverts make men seem, perhaps unfairly. 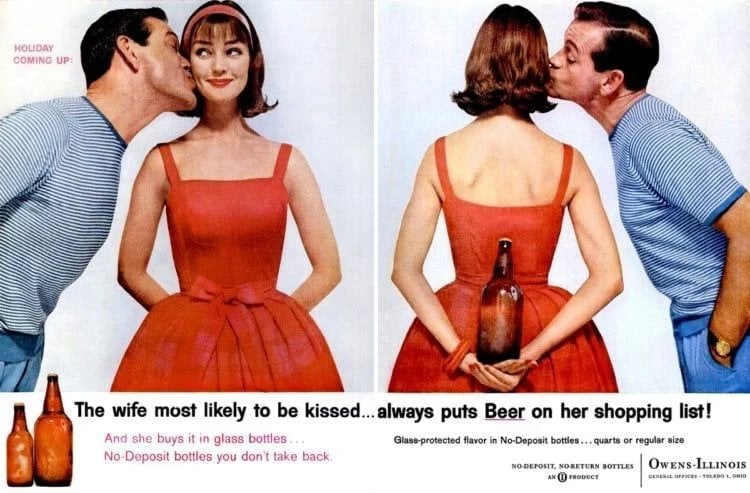