When the public thinks of elite warriors, it's often the Navy SEALs that come to mind. Their name is an acronym of Sea, Air, and Land, denoting their ability to go wherever they're needed to complete their mission. SEALs and their predecessors have been involved in major conflicts around the world since World War II, and thus have a long and colorful organization history. One of their most publicized take-downs was Osama Bin Laden, the most wanted man in the world, so it's clear that their reputation is growing.

A Start in World War II

There were a number of specialized maritime commando units operating in World War II that were a precursor to the modern SEALs. The Office of Strategic Services (OSS), a predecessor of the CIA, had a maritime section, which was tasked with infiltrating clandestine agents and supplying resistance groups by sea, as well as conducting maritime sabotage.

Amphibious Scouts and Raiders teams were created to reconnoiter prospective landing beaches. They also led assaults to the correct beaches and had a pivotal role in North Africa and D-Day landings.

World War II also saw two demolitions units created. The Naval Combat Demolitions Units (NCDUs) were trained in the demolition of submerged beach obstacles and were awarded the Presidential Unit Citation for their actions at Normandy. 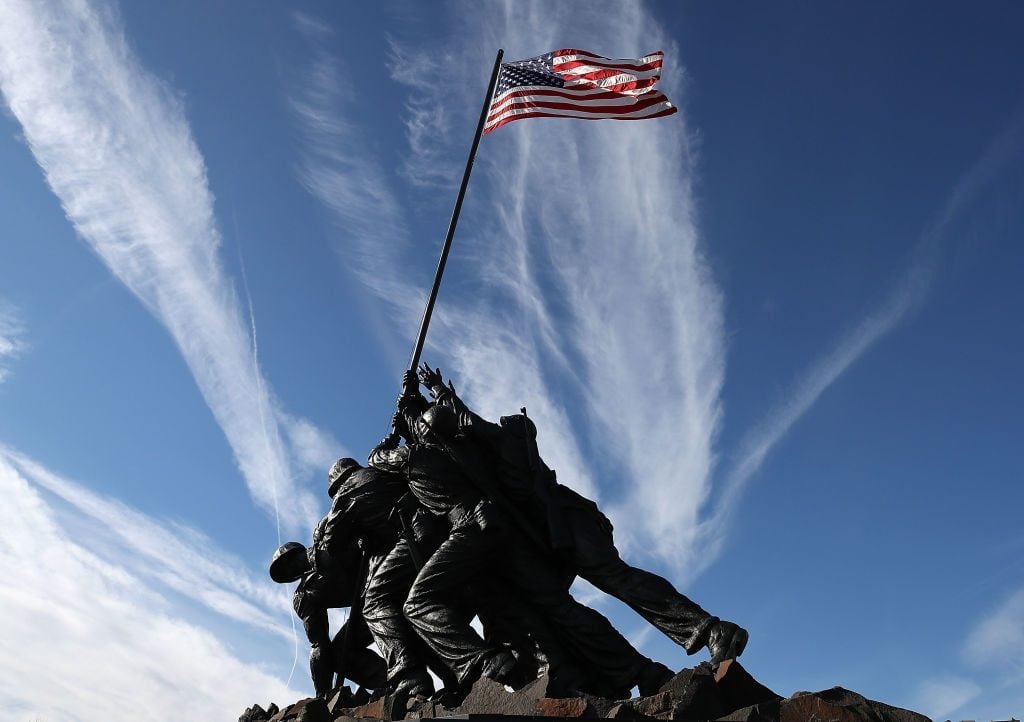 The UDTs went on to see action in the Korean War, and it was there they showed the versatility and adaptability that would become the hallmark of the modern Navy SEAL. New types of missions included coastal raids at night to destroy railroad tunnels and bridges. By the end of the conflict, the UDTs had expanded their mission capabilities, with intelligence gathering, clearing of ordnance and conducting raids added to their traditional reconnaissance and obstacle clearance duties. 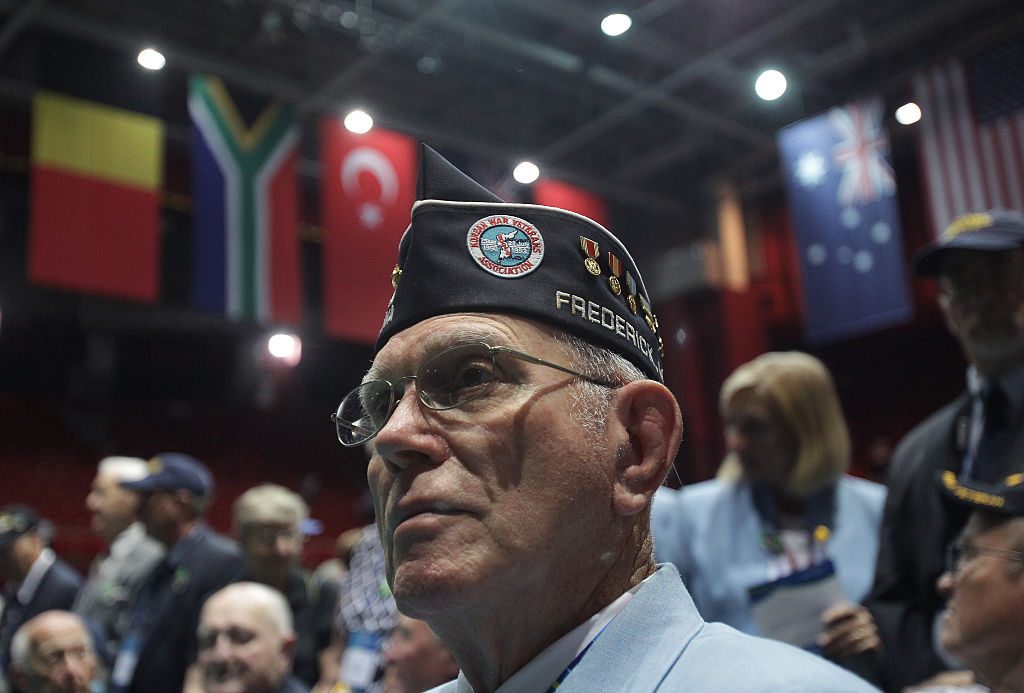 The Official Birth of the Navy SEALS

In May 1961, President Kennedy announced that $100 million would be spent strengthening US Special Operations Forces. Some people have seen this as the official birth of the SEALs, but it was really formalizing an ongoing process. The concept of a naval guerrilla force with sea, air and land capability had been outlined in March of that year and the first two SEAL units were formally established in 1962.

Although the first SEAL missions were in communist Cuba, the first war they fought was Vietnam. Originally sent to train South Vietnamese troops in the same methods they used, SEAL teams quickly began to be used for covert operations. Their anti-guerrilla tactics were effective in bringing the war to the enemy and their camouflage paint saw them named "the men with green faces" by the Viet Cong. Although they mainly operated from boats, they also developed air assault operations from helicopters in Vietnam. 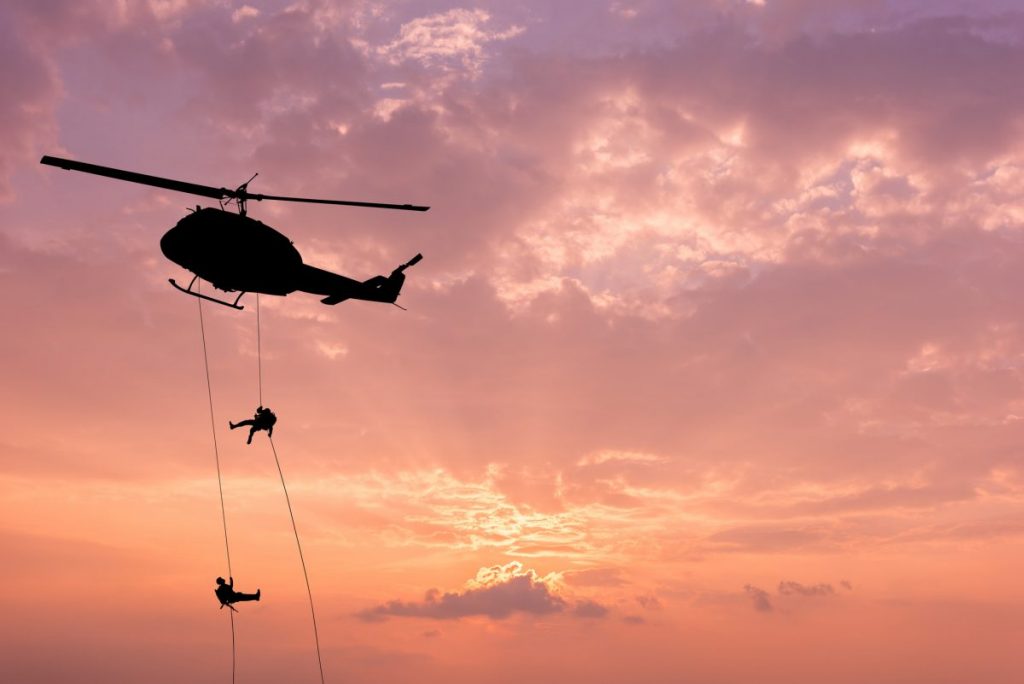 While many SEAL missions remain classified, the teams have seen action in nearly every conflict the United States has been involved in, including Panama, Grenada, Bosnia, and Somalia. The SEALs have undertaken a number of rescue operations, including freeing the cruise ship Achille Lauro from terrorists. Since then have rescued hostages in Yemen, Afghanistan, and Somalia. In recent years they have been involved in counterinsurgency in the Middle East. 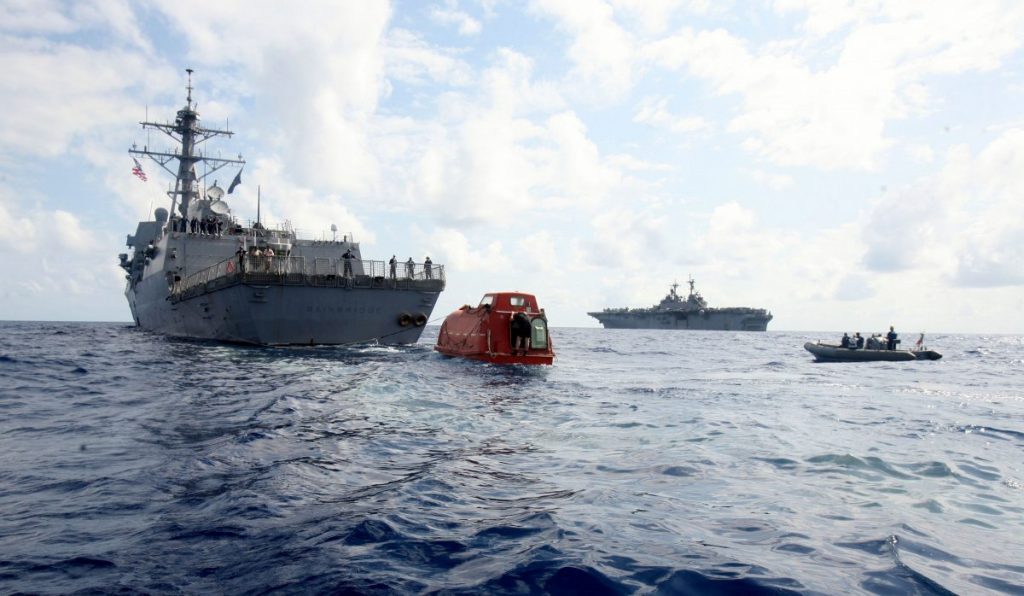 Training to become a SEAL involves the Basic Underwater Demolitions/SEAL training course, or BUD/S. It's a seventh-month-long course that has three phases: conditioning, diving, and land warfare. The most infamous period of training is Hell Week, five days designed to push candidates past their mental and physical limits. It's estimated that 75 percent of all candidates drop out of training. For those who pass, parachute training and SEAL Qualification Training follow before finally being accepted into the SEALs. 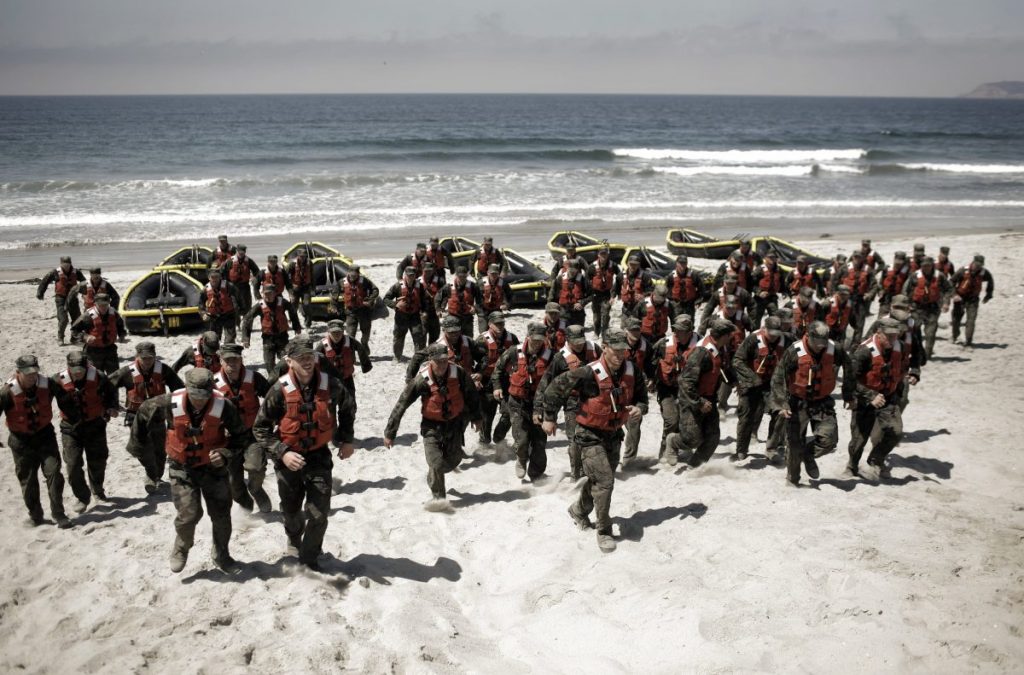 Sailors who complete BUD/S and the SEAL Qualification Training are designated SEALs and receive the Special Warfare insignia for their uniform. More commonly known as the SEAL Trident, this gold insignia is worn on the breast and is one of the most recognizable of all navy insignias. The trident is also the only insignia that is the same for officers and enlisted men, which is partly due to their combined training during BUD/S. 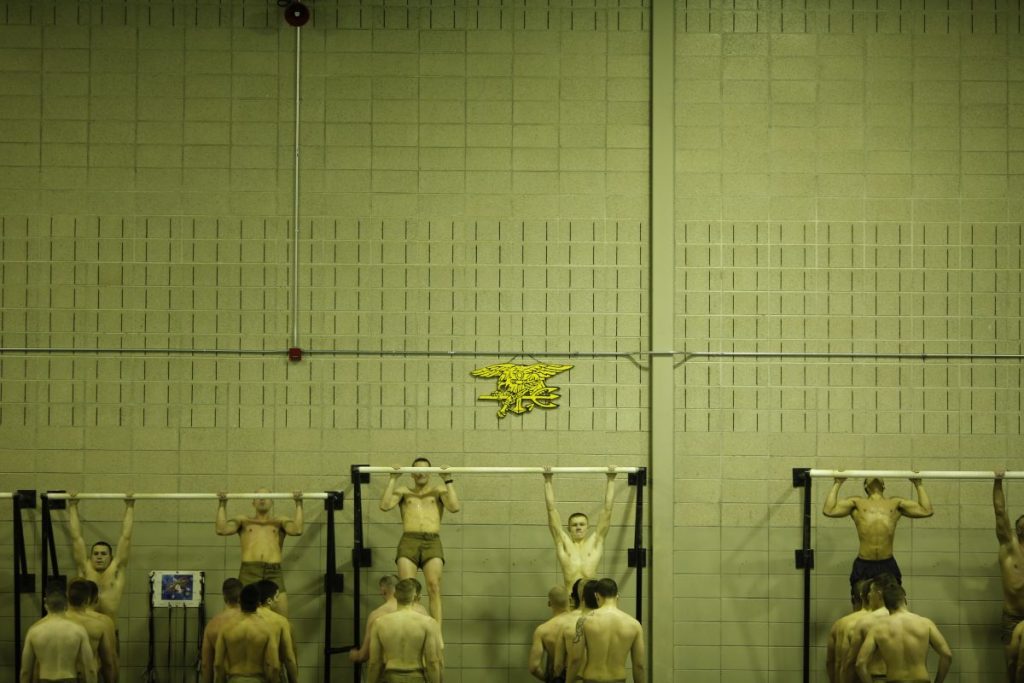 The Ethos of the SEALs

The Navy SEAL Ethos reinforces these warriors' commitment to integrity, loyalty, and discipline. The values of the SEALs are summed up in the SEAL Code: 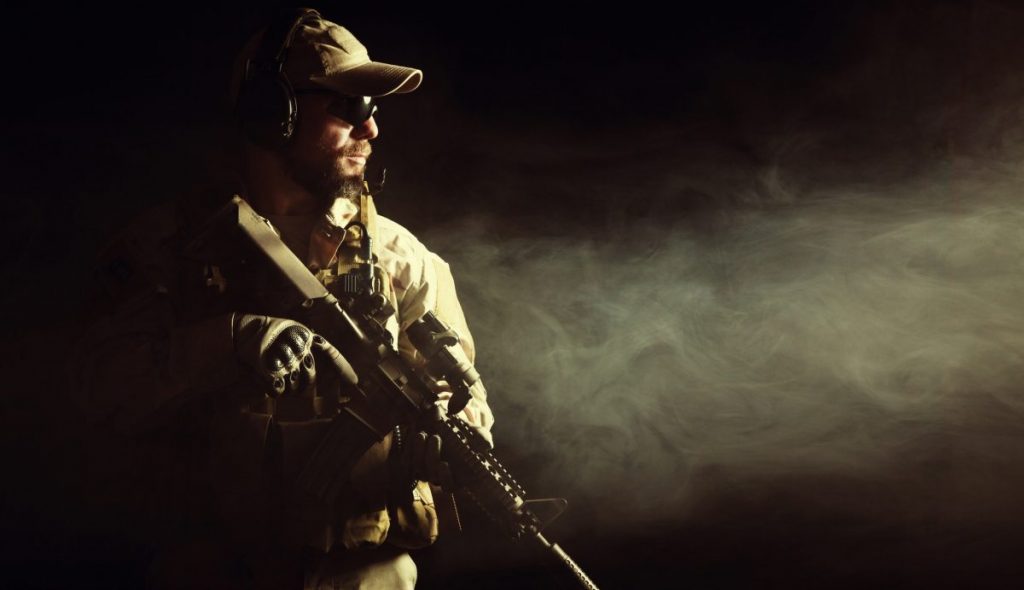 The Future of the SEALS

Navy SEALs continue to be leaders in modern warfare. Their versatility and adaptability see them continue to be sent to war zones around the world to protect American citizens and U.S. interests. The Navy has suggested that future SEAL Training will focus on returning to their roots, including diving, swimming, reconnaissance and working with submersibles, to prepare for the wars of the future and help bolster the strength of Naval forces. 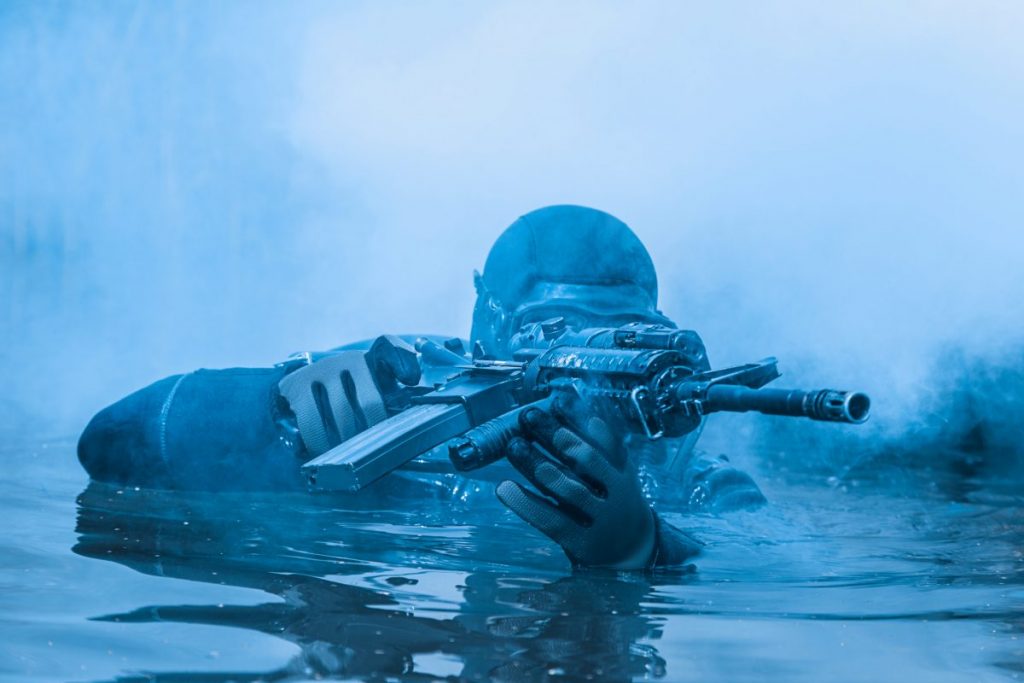