When kids get together for birthday parties and family reunions, they'll need some enjoyable activities to ensure no one gets bored. Old-fashioned ball games are terrific boredom busters that don't require much equipment. They can get a lot of kids moving, laughing, and interacting with one another. If you're looking for fun video-game alternatives for kids, keep these traditional ball games in mind whenever you need to entertain a group. They've been delighting kids for decades and are sure to delight yours too!

To play Four Square, all you need is a playground ball and some sidewalk chalk. Set up this game by drawing a large square on your pavement or asphalt. Then divide it into four squares by drawing a cross inside the large square and then numbering the squares 1-4. The game is typically played with four kids at a time, so if you have more, they’ll have to take turns. While the rules of the game can vary, the goal for each player is to catch the ball after it bounces in their square once. If they don’t catch it, they move to the next square until they’re eliminated. The last player standing in their square wins. 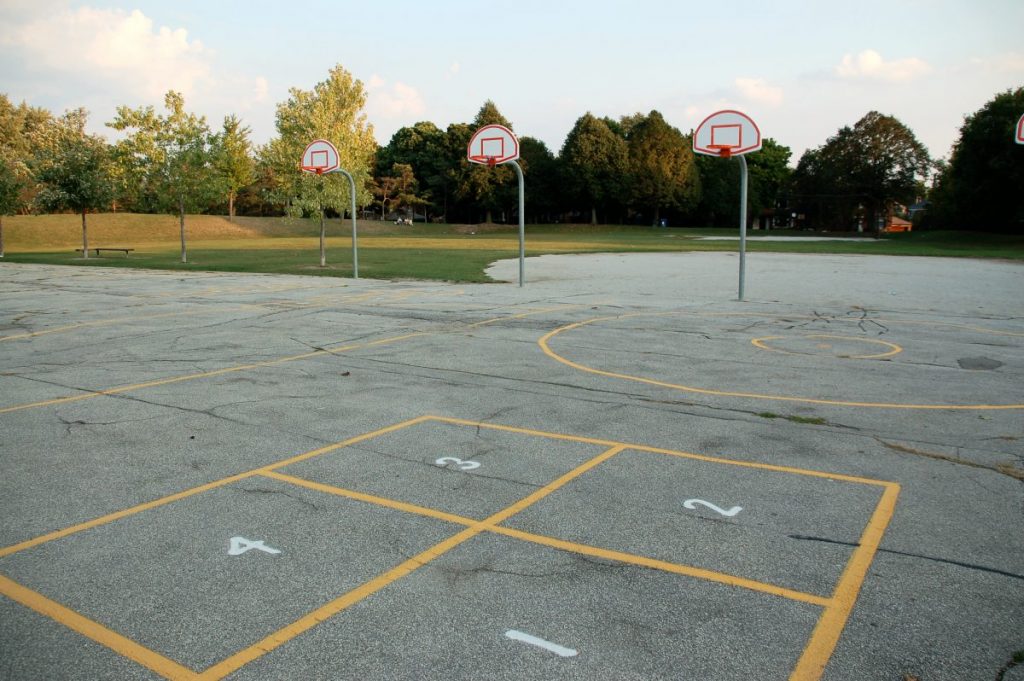 If you’ve got baseballs or softball enthusiasts, you can entertain them with a game of Five Dollars. To play, you’ll need to bat the ball to a group of kids. Ideally, you’ll need someone to keep track of the “money” that the kids will earn by fielding the ball. Fielding a grounder earns a child 25 cents. Catching a fly ball will earn them 50 cents. The first player to earn five bucks wins the round. 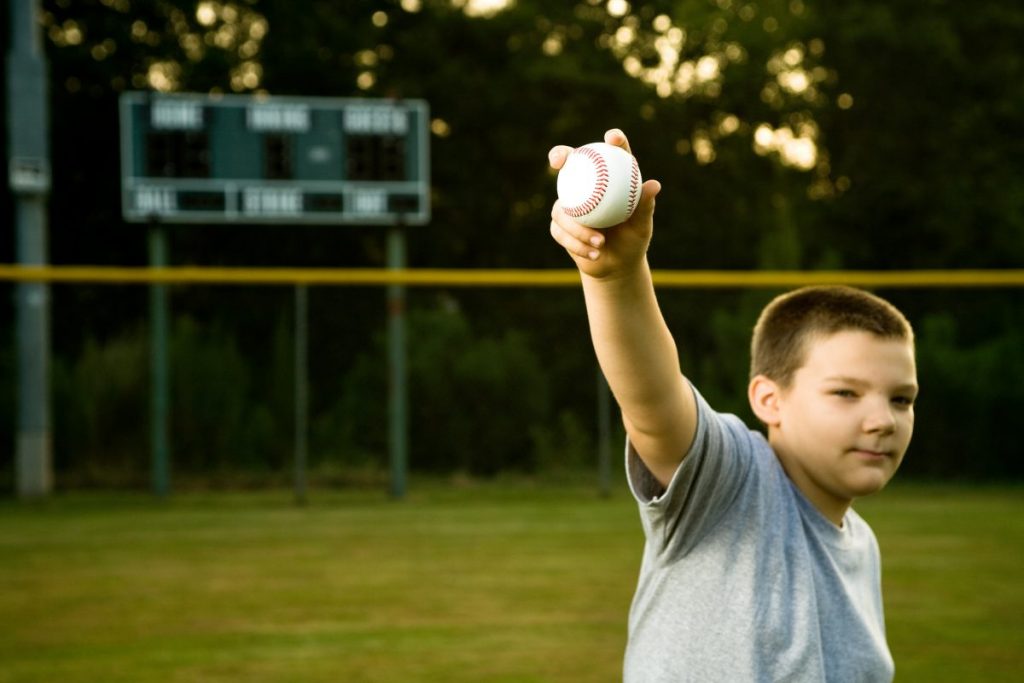 A highlight of the Bozo Show that was televised a few decades ago was the Bozo Buckets game. To play this game, you’ll need a ping-pong ball and a number of plastic buckets (beach pails work great). If the children are younger, you won’t need more than six pails. If the children are older, you might want to challenge them by using ten buckets. To play, place the buckets in a straight line. Each child who takes a turn will first try to toss their ball in bucket one. If they make it, they try for the second bucket and so forth. Assign prizes to each bucket—the best one should be assigned to the last bucket. If a child misses, they are out of the game but still get to keep the prizes they’ve earned. 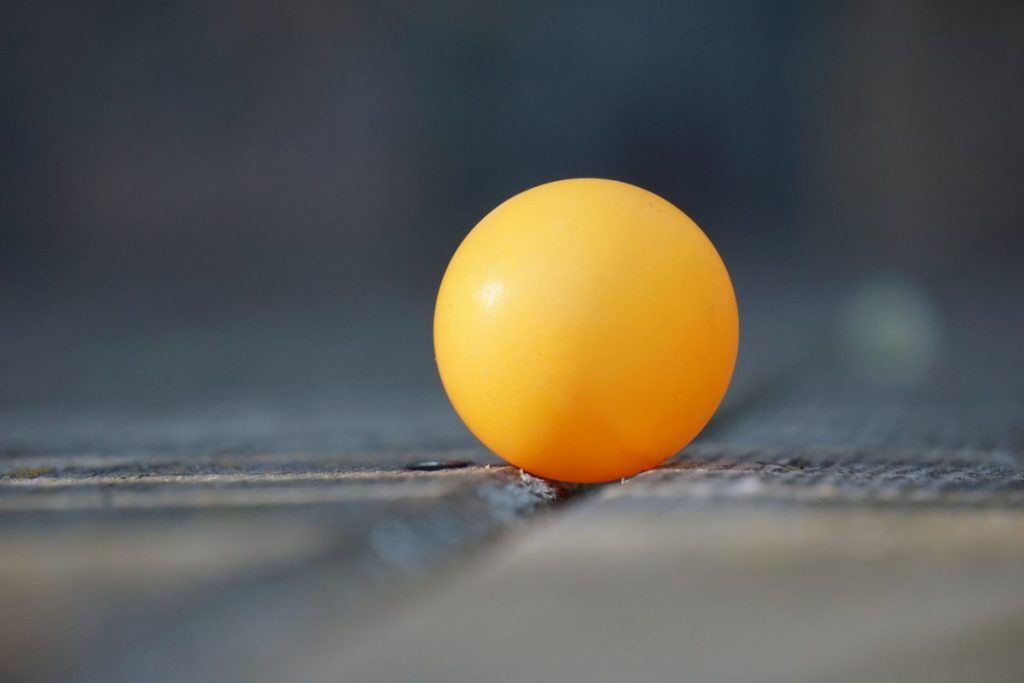 Dodgeball is a classic ball game that’s played with a large group of kids. In fact, many physical education teachers still include this game in their lineup of activities. To play, you’ll need several playground balls or bouncy balls and a large space such as a playground or backyard. First, assign the boundaries of the court. You’ll need two teams of kids to play. Draw a line down the center of your court. To play, the kids on each team must hit kids on the other team by throwing balls at them. If an opposing player catches the ball on a fly, the thrower is out. If a child is hit by a ball on a fly, they are out. The last player on the court wins. 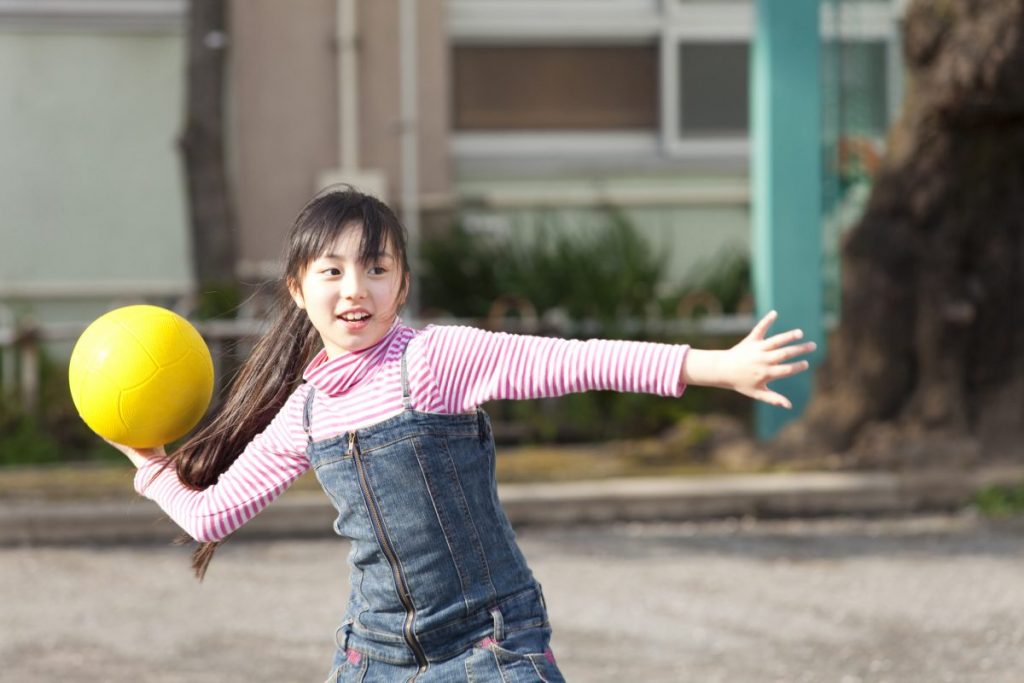 Wiffle ball is a game that is played just like baseball, but less formally and with a plastic bat and a plastic ball with holes in it. The Wiffle ball and bat gained popularity in the 1960s. Children can easily play the game by creating a makeshift baseball diamond in their backyards or at a local park. You’ll need to create the “bases” using any available objects (i.e. pieces of cardboard). Kids can decide how many innings to play or may decide to play until a specified score is reached. 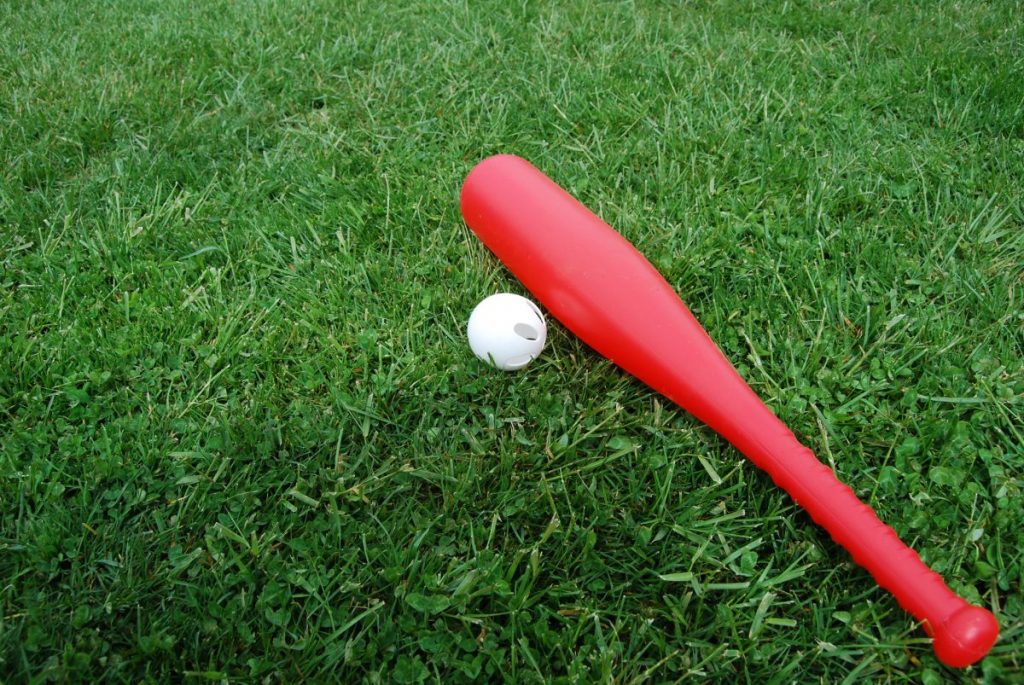 If you have a group of young children you need to keep entertained, consider using a beach ball or plastic bouncy ball to play a game of hot potato. In this classic game, you’ll have the children stand in a large circle. Play some music and instruct the children to toss the ball around the circle in order. Randomly stop the music. The child holding the ball must leave the circle. The last player standing wins. 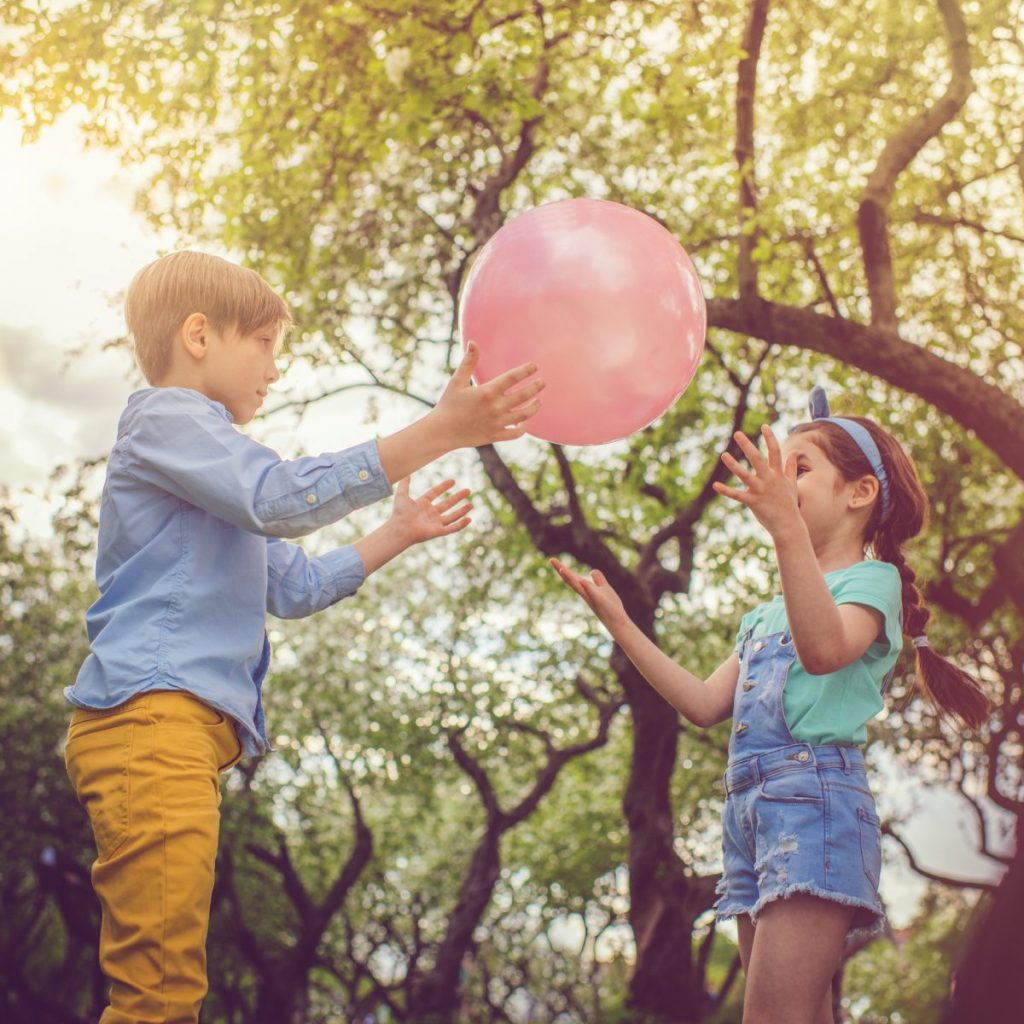 There are various forms of the playground game known as keep away. Kids can play this game with any time of ball, but a small rubber ball is ideal. Assign kids into teams. Then, toss the ball into the air. The team that catches the ball throws it around to other team members, trying to “keep it away” from players on the other team. The other team’s players naturally try to intercept it. The game is often played without any type of score, but you can incorporate your own rules to assign a winning team. 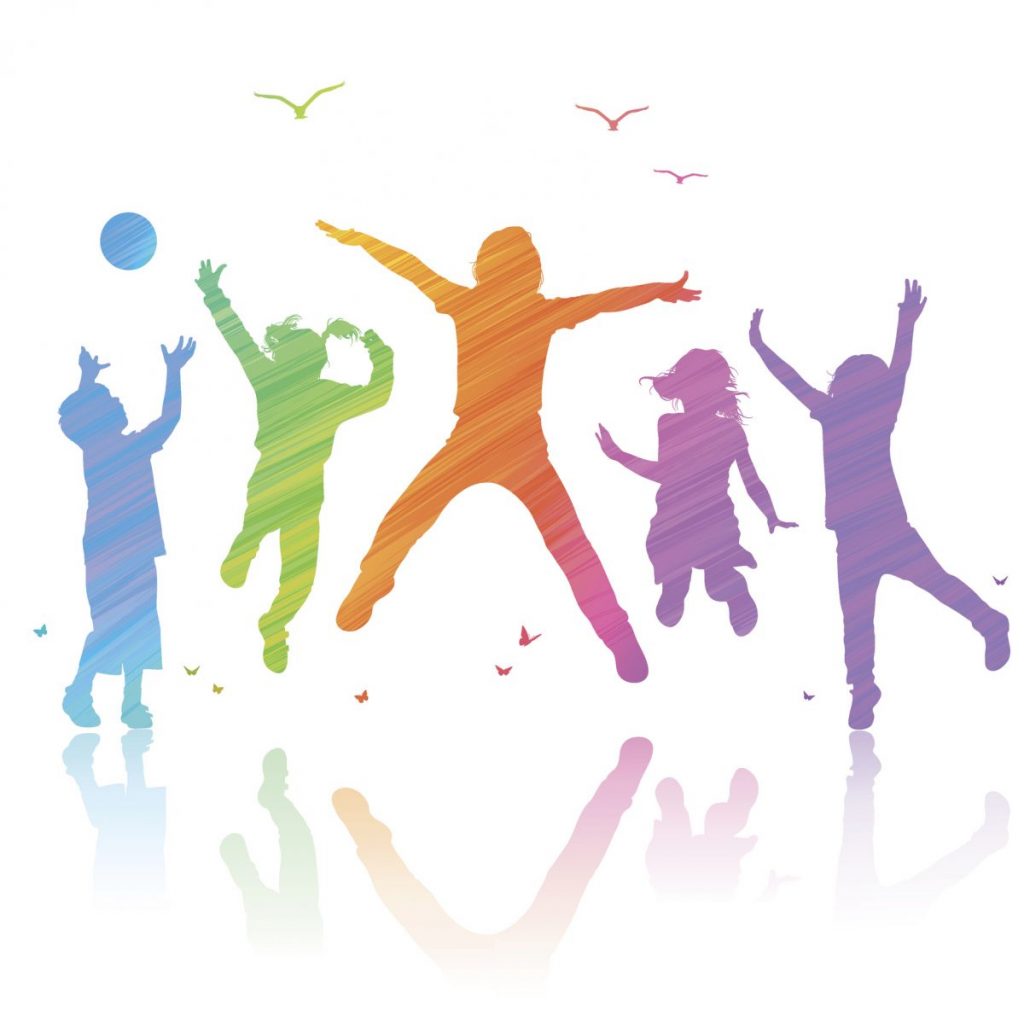 While kickball for older children can be played similarly to the game of baseball, simple kickball or kindergarten kickball is designed for younger children, but can certainly be adapted for older ones. To play, you’ll need a kickball (a rubber playground ball) and several rubber cones. You can also use stackable buckets if you have them on hand. The adult plays the role of pitcher. The children line up in the outfield. One of them stays behind as the kicker. The pitcher rolls the ball and the “batter” kicks it. Then, they run to collect as many of the cones or buckets as they can before the ball is returned to the kicker. The child who collects the most wins. After batting, the child enters the field and the next child in line to come off the field bats. 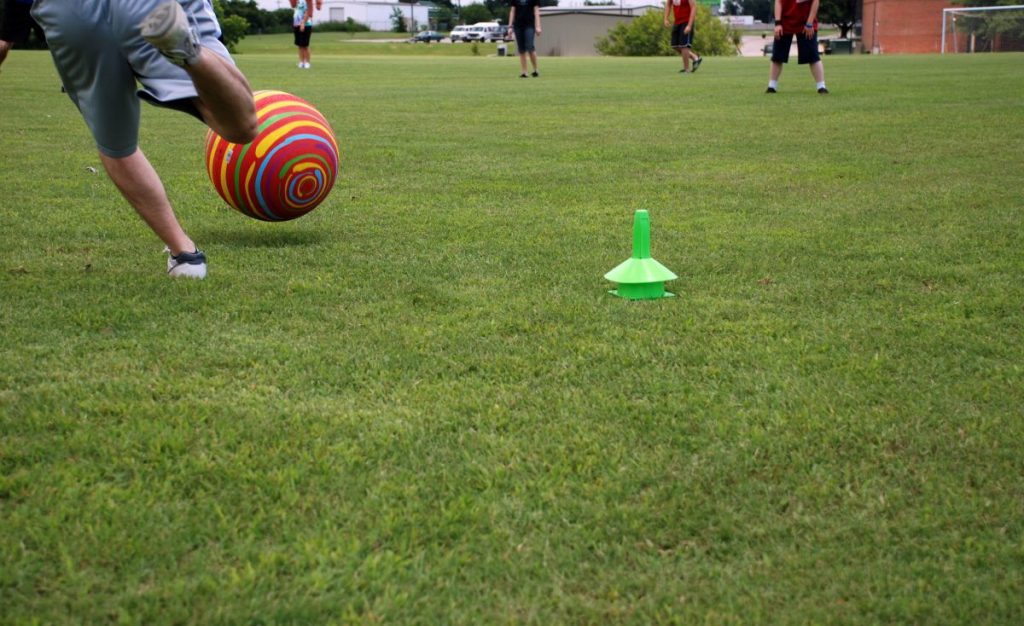 Off the wall is a largely urban game that is played with a racquetball or rubber ball that has good bounce. The idea is to throw the ball against a large wall (with no windows) so that it bounces back into the crowd of kids. The player who catches it scores a point. The first player to reach ten or twenty points (you decide) wins. 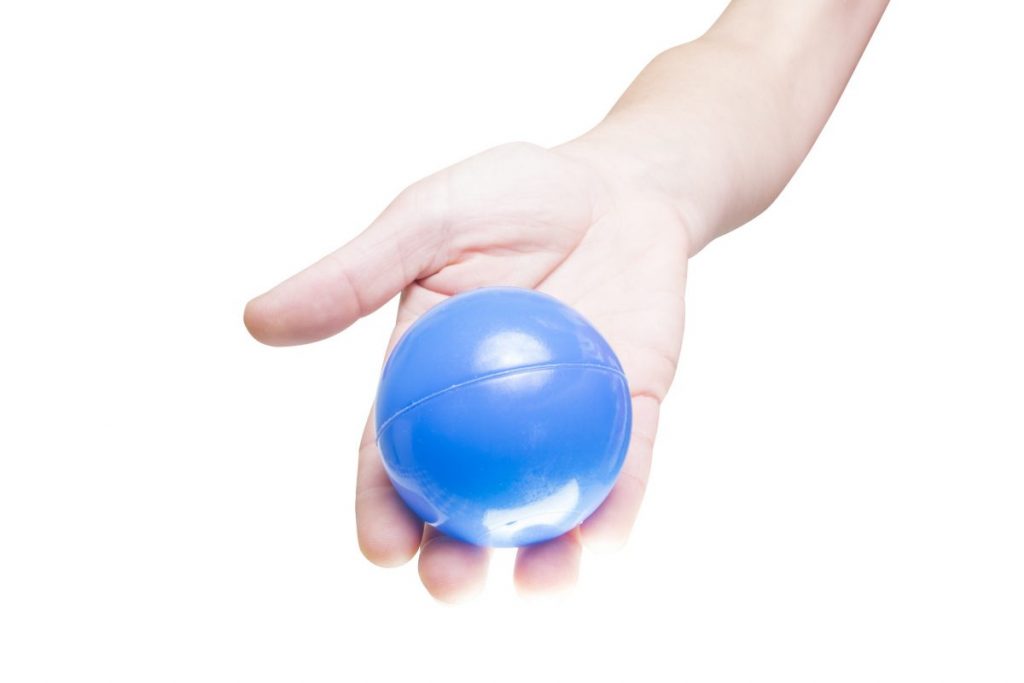 Playground soccer is played similarly to actual soccer, but the goal area can be makeshift—the space between two trees, for example, and the ball can be a kickball or any other type of playground ball. As per regular soccer, kids cannot use their hands to touch the ball. They can use their bodies to block the ball from entering the goal space but cannot use their arms or hands. The team to score the most points wins. 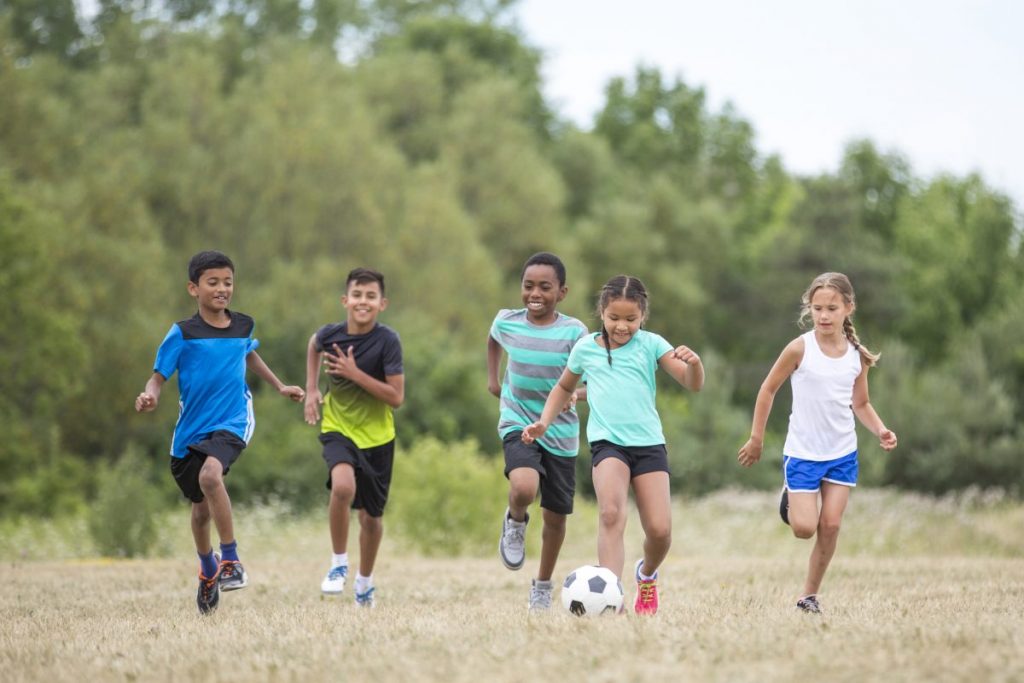