Getting to Know the Olfactory System

The olfactory system is a set of sensors that help humans sniff out food, danger, and even love. Smells are the gateways to memories and can evoke powerful emotions even after prolonged dormancy. Studies suggest that the human olfactory system can discern up to a trillion scents. It's one of the most complex systems because it ties into the other senses, as well as the brain and organs. For example, the nose is called the guardian of the lungs. Researches continue to conduct studies about how it all works together.

The nasal cavity, ethmoid bone, nostrils, and mucus-covered tissue called the olfactory epithelium comprise the peripheral olfactory system. When someone inhales, chews, or swallows, odor molecules enter the peripheral pathway through the nasal cavity. The mucus dissolves the molecules and transmits the odor to the brain with the help of olfactory neurons. This process is called sensory transduction. The associative olfactory system, on the other hand, has more to do with processing pheromones. 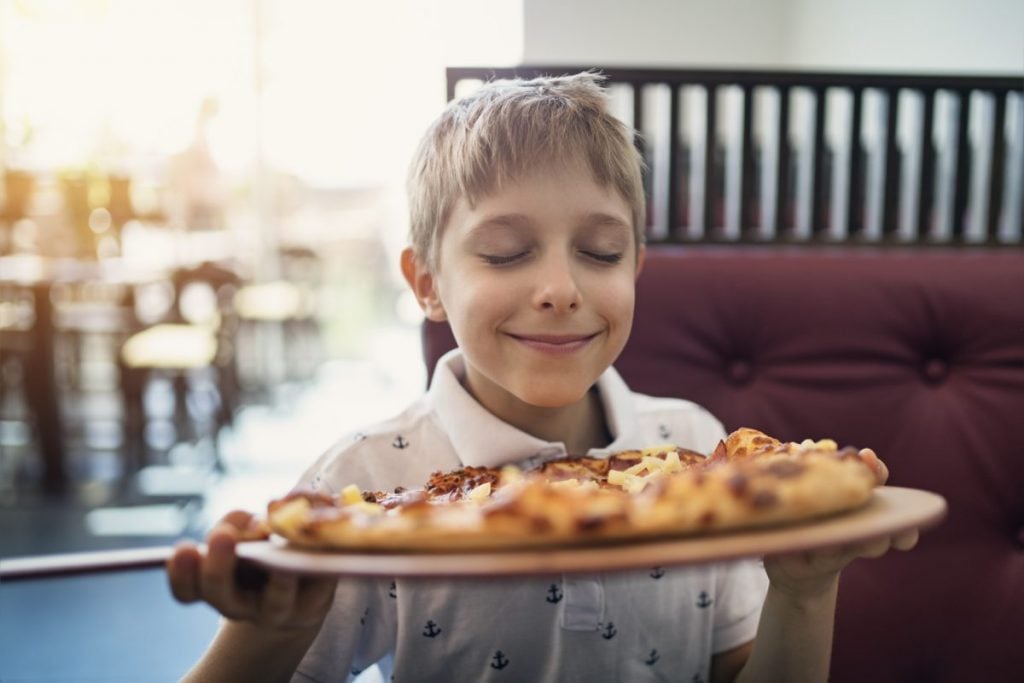 When an odor reaches the epithelium, proteins from tiny hairs called cilia bind with it, generating an electrical message. This message makes a path to the olfactory nerve. All the information about the odor passes from the peripheral to the central olfactory system in the brain, where an elaborate process takes place to register the odor and access memories. 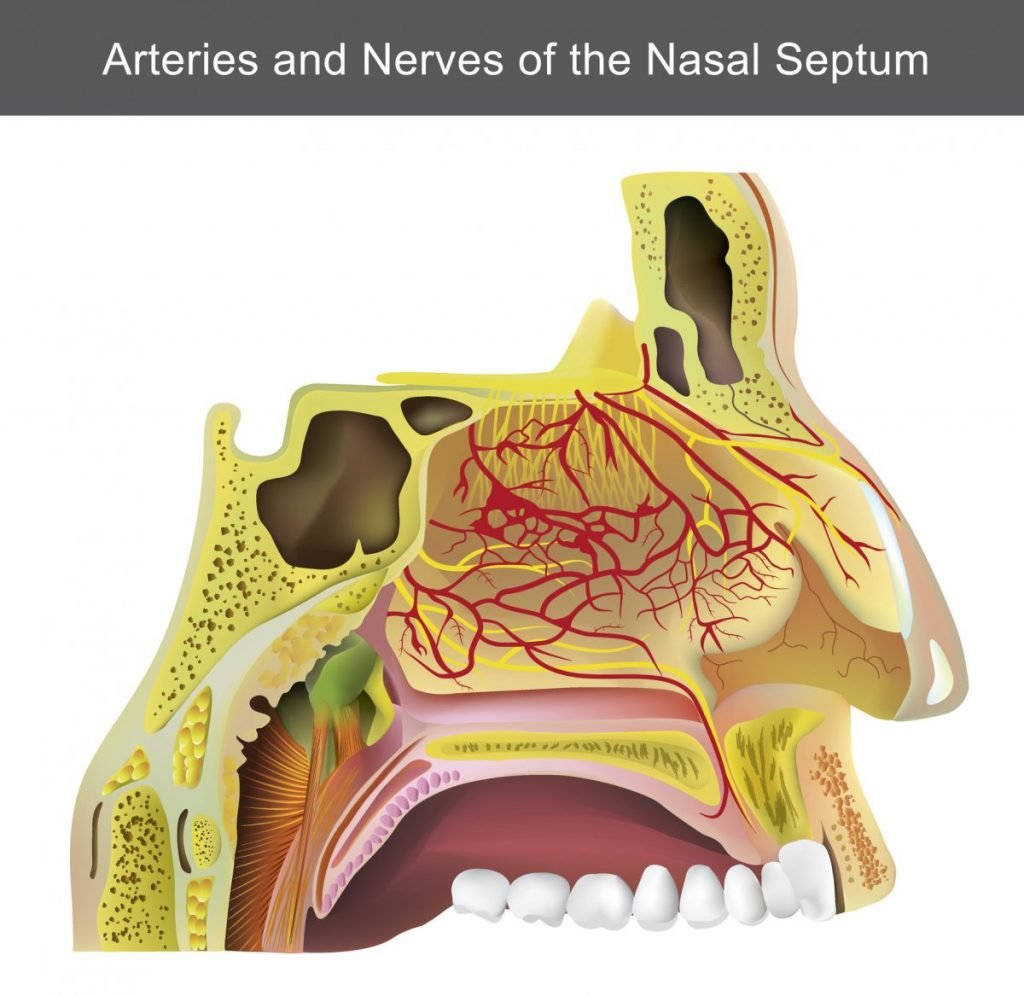 Thanks to Nobel-winning research conducted by Linda Buck and Richard Axel, we now understand much more about olfactory receptors neurons. There are millions of olfactory neurons in the epithelium that help the brain classify odors. Certain receptors are designed to identify certain odor molecules. Furthermore, due to their shape, odor molecules can fit into more than one receptor at a time, enabling the nose to potentially identify billions of scents. 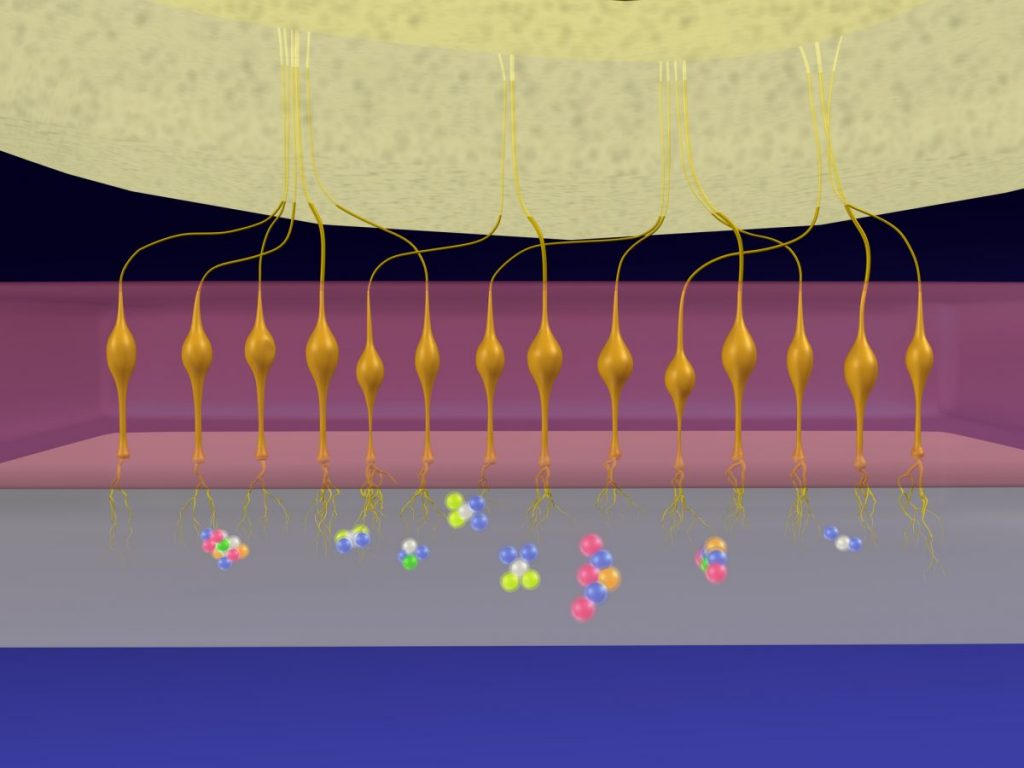 The olfactory nerve, known as CN1, is the first and shortest of the 12 cranial nerves. It extends through the cribriform plate of the ethmoid bone that separates the brain and nasal cavity. After traversing the plate, the odor molecules make their way to the olfactory bulb. 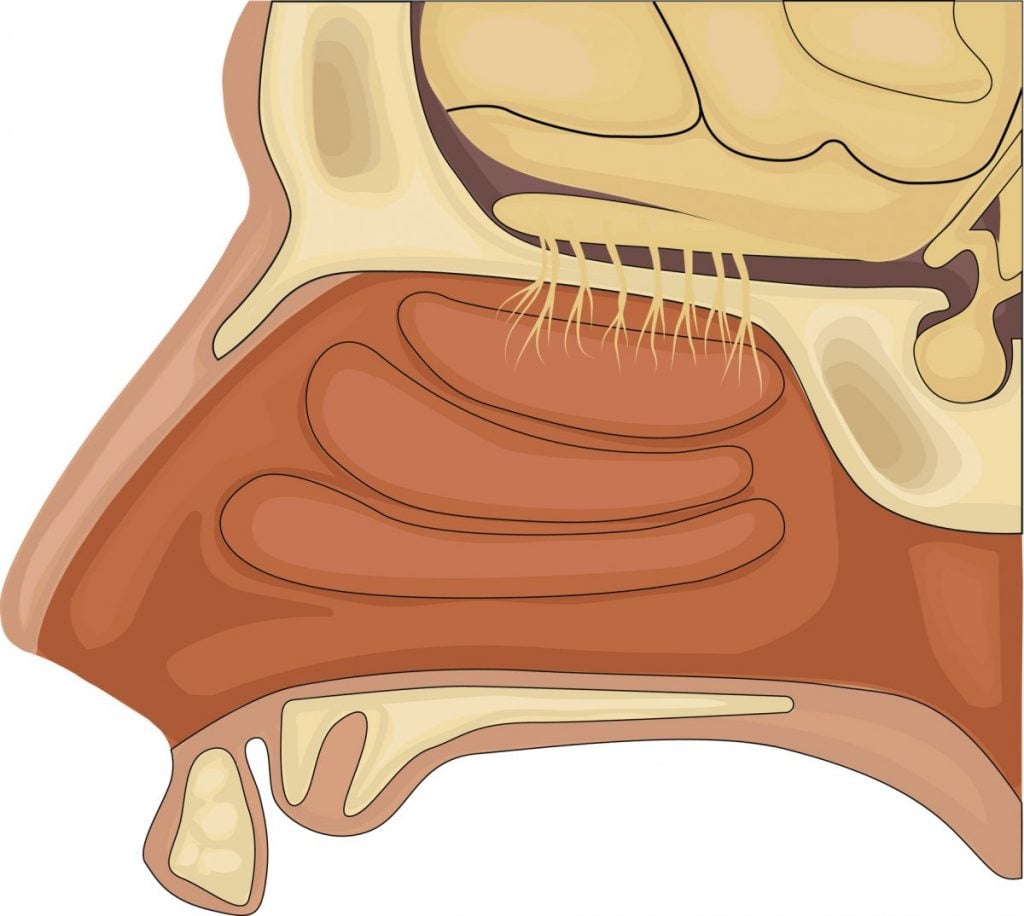 Above each nasal cavity is an olfactory bulb, sitting at the bottom of the brain and protected by the cribriform plate. The glomerular layer of the bulb receives the odor and runs it against the layer's built-in odor map, which is divided into clusters and zones that help to identify the chemical characteristics of odors. One such example is spoilage, which has a particular chemical structure. In addition to discriminating between odors, other functions of the olfactory bulb include achieving better detection by filtering out background odors. 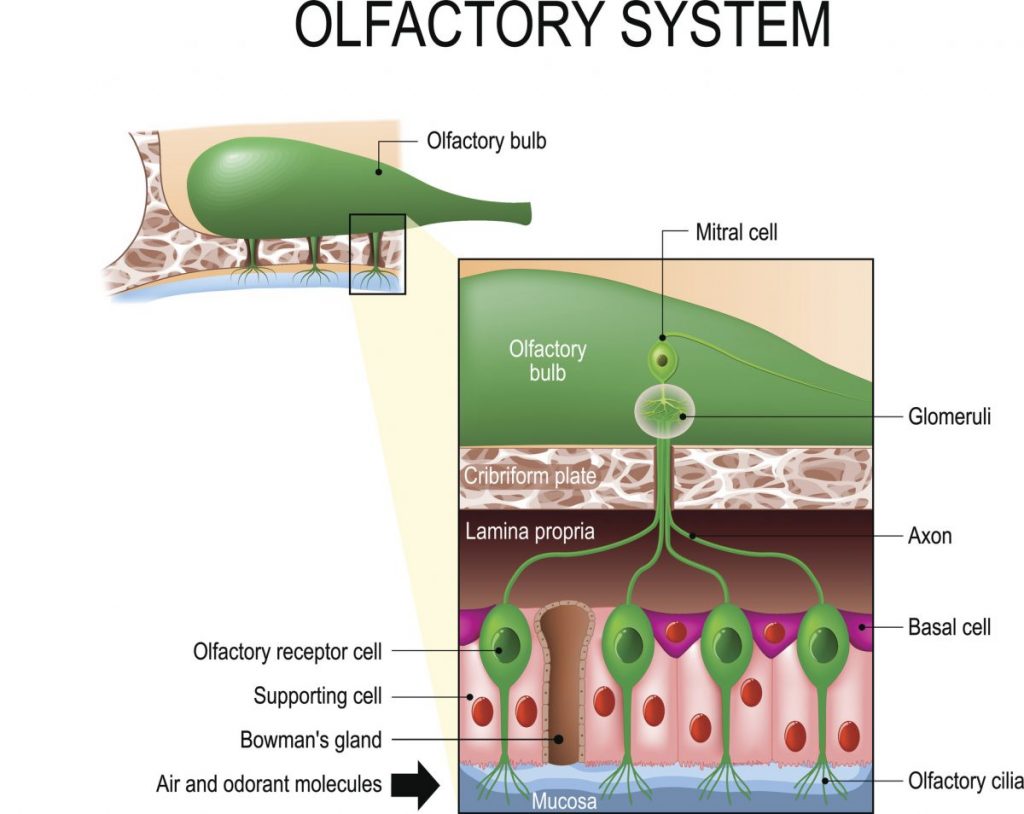 From the olfactory bulb, odor information passes to the piriform cortex, which is a part of the rhinencephalon, the smell-brain region of the cerebrum. It's the largest recipient of the olfactory bulb and is known to refine odor classification. It has the complex task of processing odor mixtures and relating them to memory. 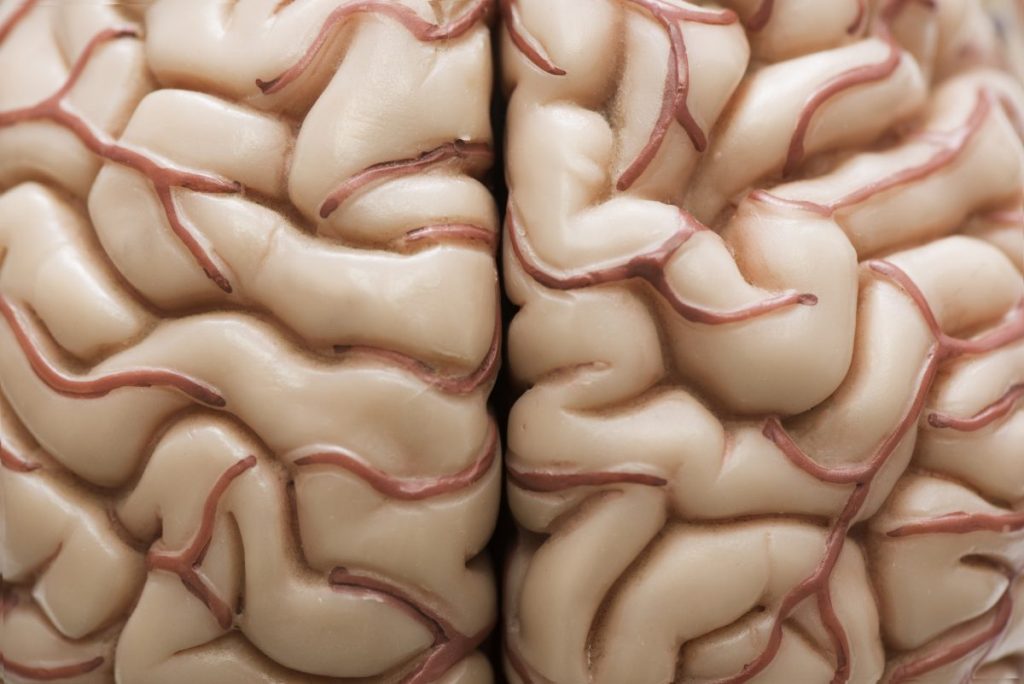 The olfactory tubercle is a processing station that helps recognize reward. Found at the basal forebrain, it also receives direct input from the olfactory bulb and is supplied with dopamine, a neurotransmitter responsible for pleasure. Because it has so many nerves coming to and from the brain, it's a prominent reward-arousal multisensory processing complex. 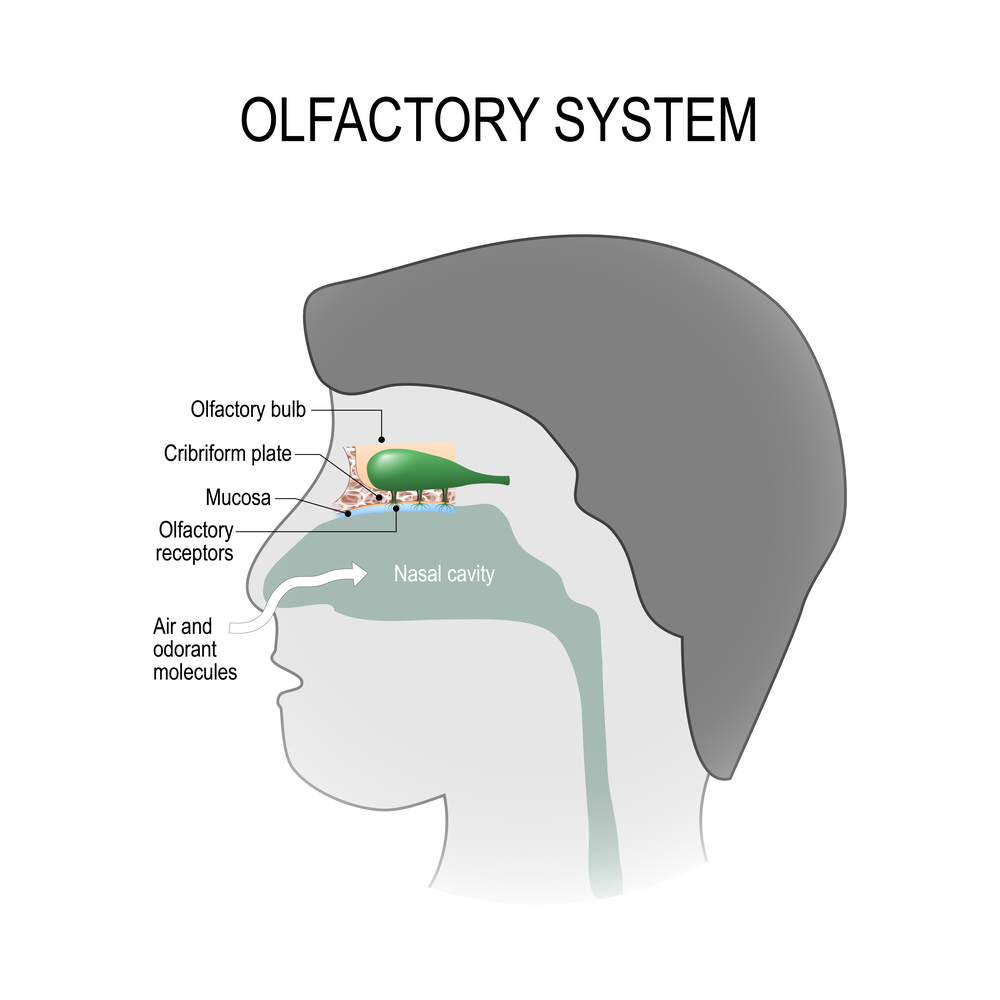 The amygdala sends projections to several parts of the brain after receiving input from the olfactory bulb and olfactory cortex. It stores memories and emotional events, forming associations between the two. Those memories integrate into potentially lifelong storage, which explains how childhood smells can continue to conjure memories into adulthood. 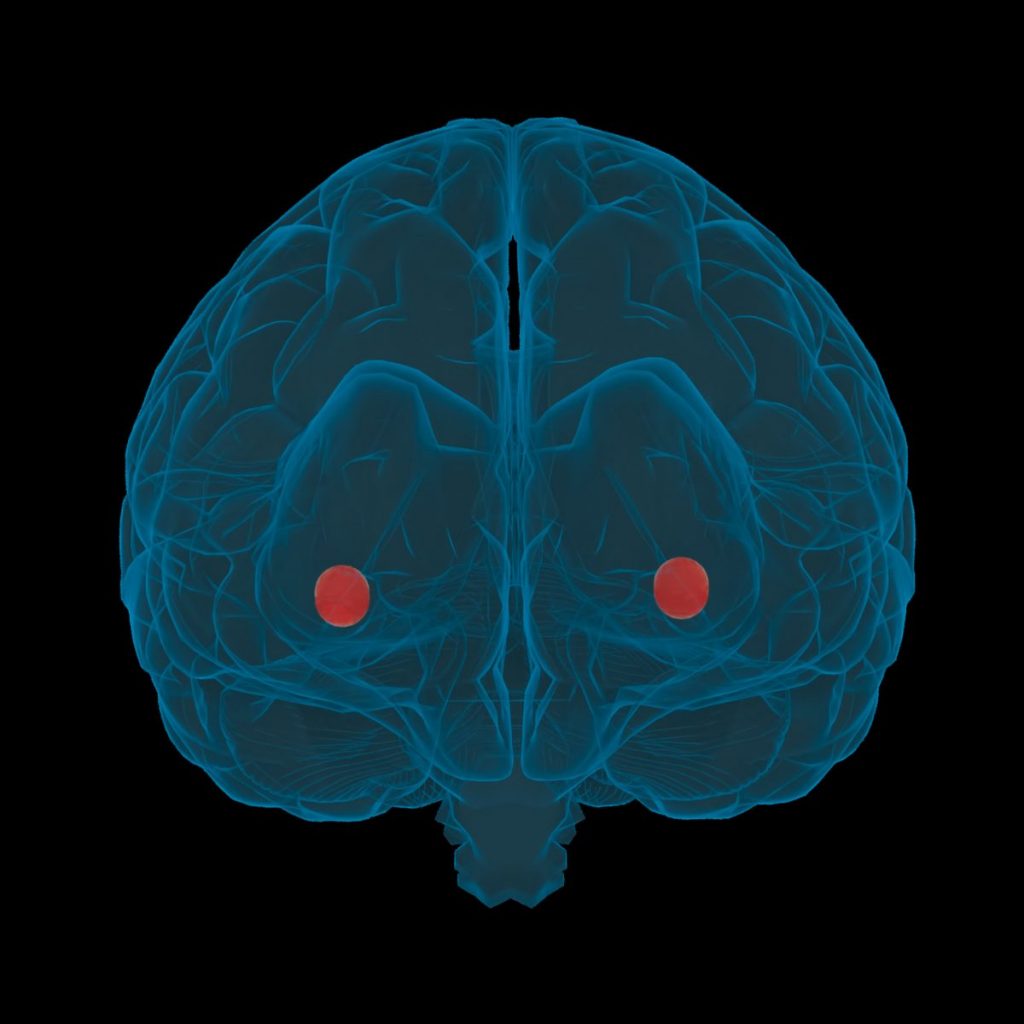 The entorhinal cortex is within the temporal lobe and has to do with memory, time perception, and navigation. Because it's a gateway between the hippocampal formation and the neocortex, it is a mediator between learning and memory, and potentially instills a pleasure attribute. The lateral region is more closely related to the olfactory cortex and the amygdala. Scientists are just starting to understand how the entorhinal cortex affects higher-level processing. 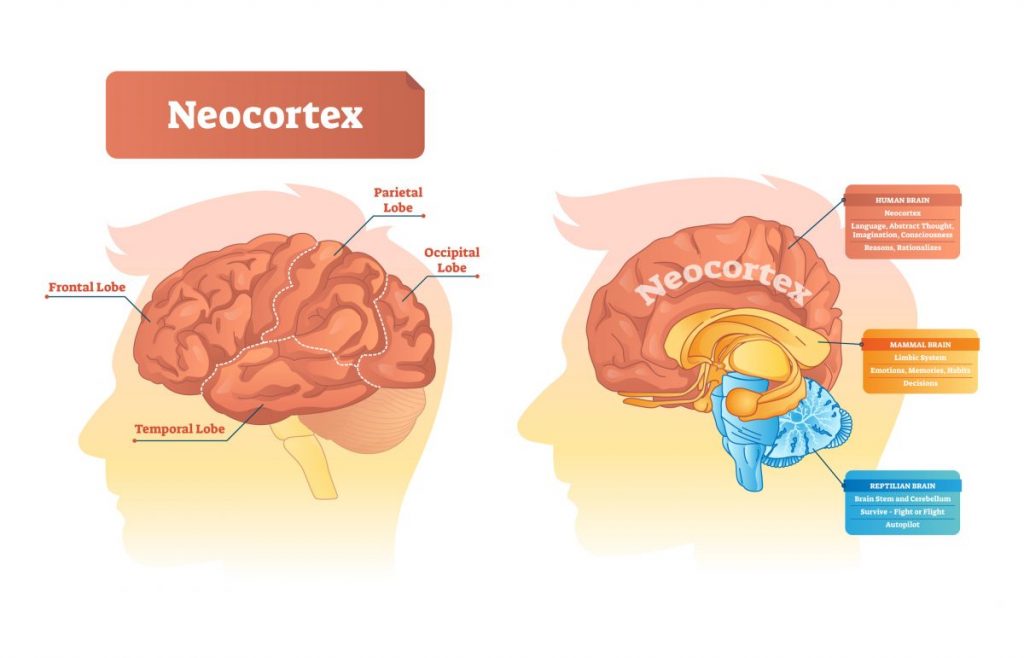 Once the olfactory bulb targets the piriform cortex, olfactory tubercle, amygdala, and entorhinal cortex, the process of linking the experience and perception of that smell continues in the brain. Four regions receive this information: the orbitofrontal cortex, thalamus, hypothalamus, and hippocampal formation. The orbitofrontal cortex keeps updated information about odors while the other three regions engage in smell, emotion, and memory correlation. 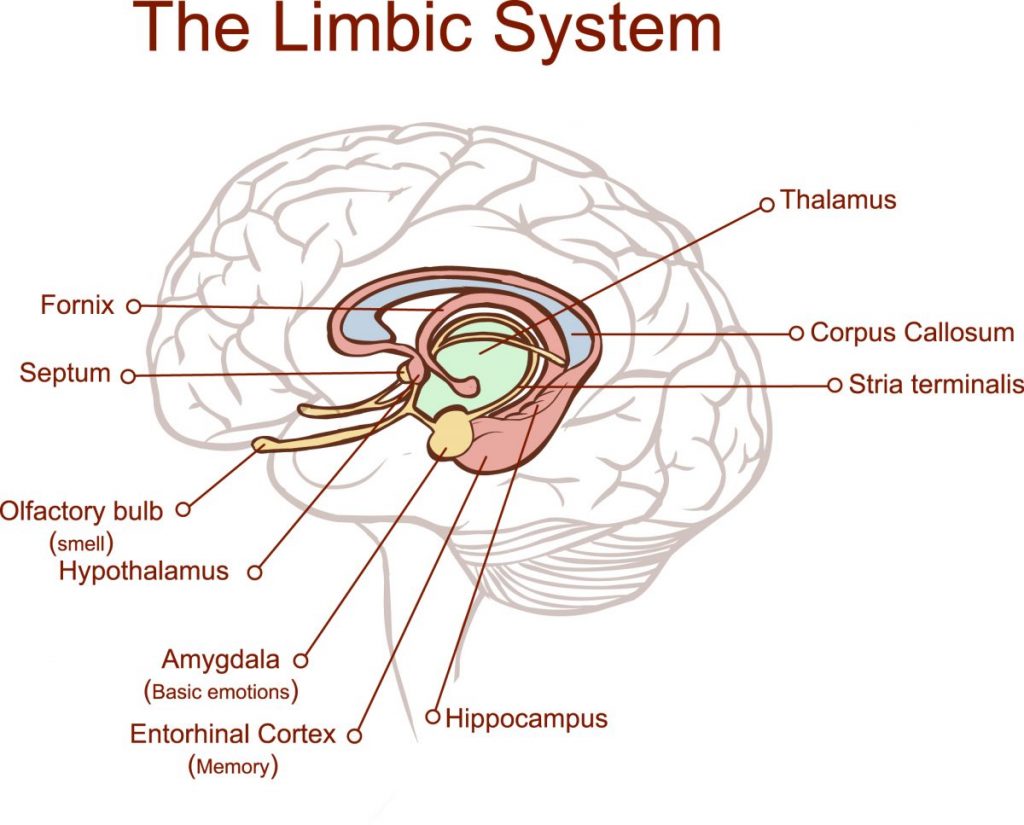