Melanoma is an aggressive form of cancer that can be life-threatening. It typically affects the skin, but it can also occur in the mouth, eyes, or under the nails. Everyone has a few moles, brown spots, and birthmarks, but people with more than 100 moles are at a greater risk of developing melanoma. The first signs often appear in atypical moles and develop slowly over time.

Melanoma often starts with a change to healthy skin, such as a darker spot or an abnormal new mole. Normal moles are round and symmetrical. Moles that are not symmetrical are one of the first warning signs of melanoma. People prone to moles and other spots should regularly check their skin for new or strange-looking spots. 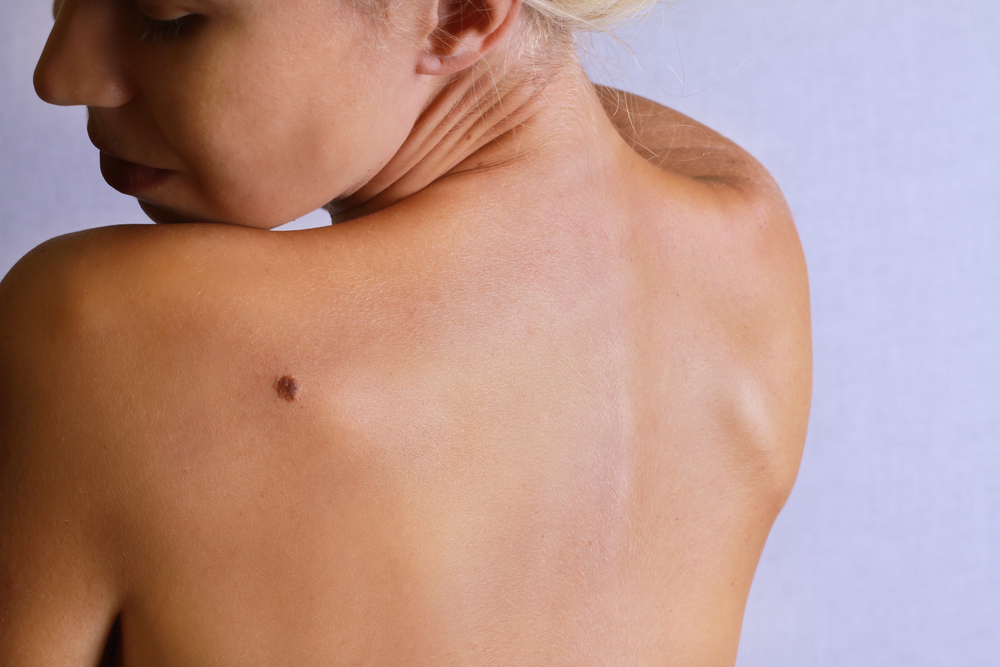 The borders of aggressive tumors are generally irregular, notched, or ragged. In contrast, the edges of non-malignant tumors are usually smooth and regular. Additionally, any change in the surface of a mole is a warning sign. Scaliness, oozing, bleeding, or the appearance of a lump or bump should be inspected, as should any redness or a new swelling beyond the border of the mole, or spread of pigment from the border of a spot into the surrounding skin. 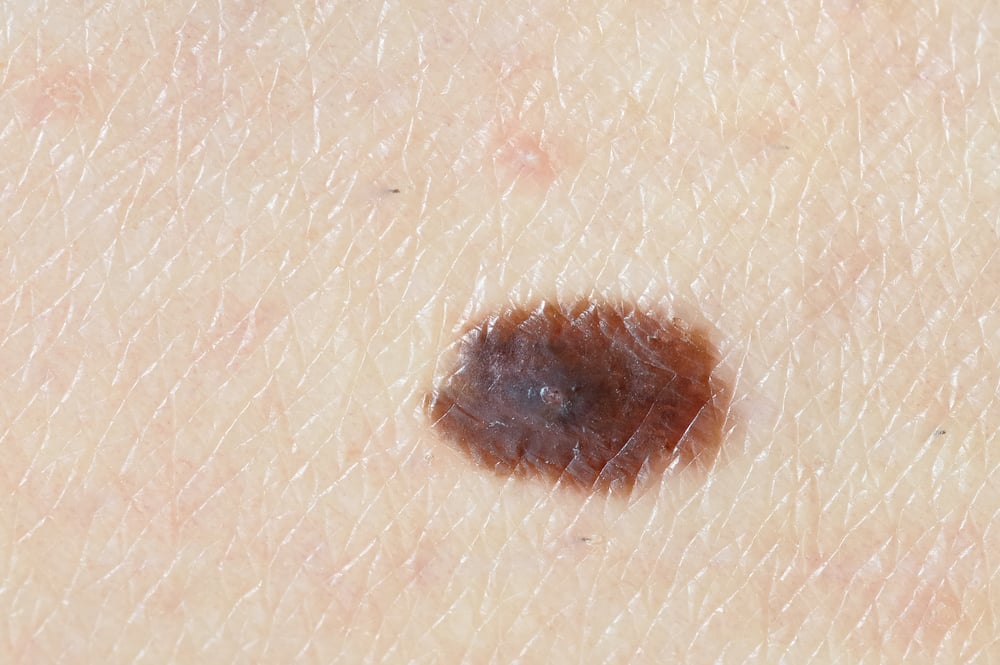 Uniform color is usually a sign of a healthy mole. Melanomas tend to develop a variety of colors, particularly shades of black, brown, and tan. They may also be blue, red, white, or pink. If a mole suddenly changes color, or is sore and does not heal for a long time, this should prompt an individual to seek medical attention. 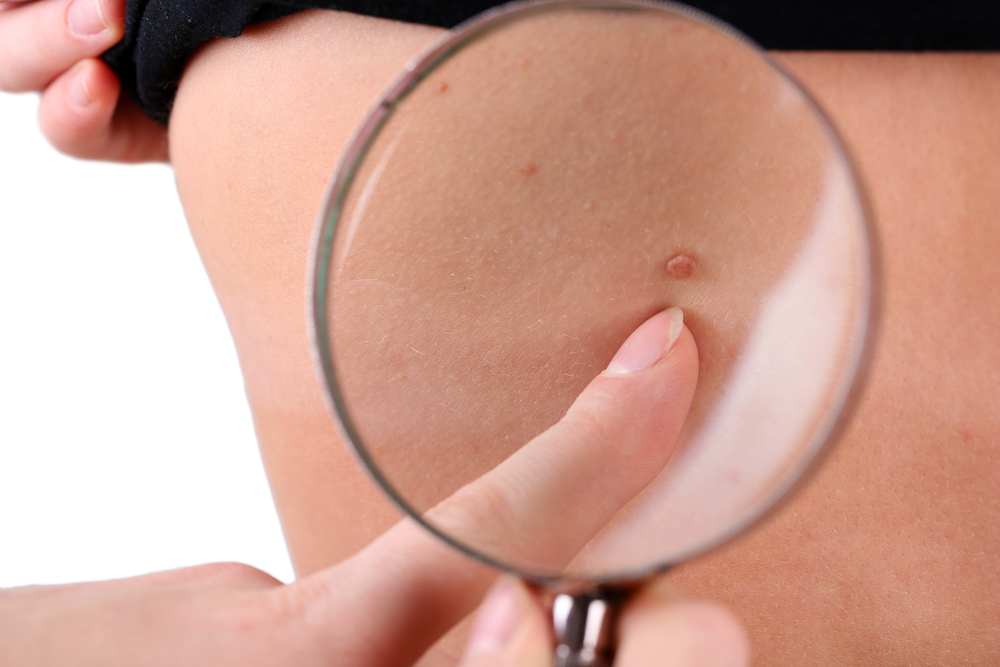 Healthy moles are generally small and flat. They do not cause pain, itching, or any other sensation. In general, moles larger than about a quarter-inch — the size of a pencil eraser — could indicate a melanoma if other characteristics, like the edges and color shade, are also problematic. A large birthmark does not mean melanoma, but if it begins to develop an irregular border or different color, or lose its symmetry, a doctor should investigate. However, smaller moles can be problematic as well, which is why watching for various signs and alarming changes is important. 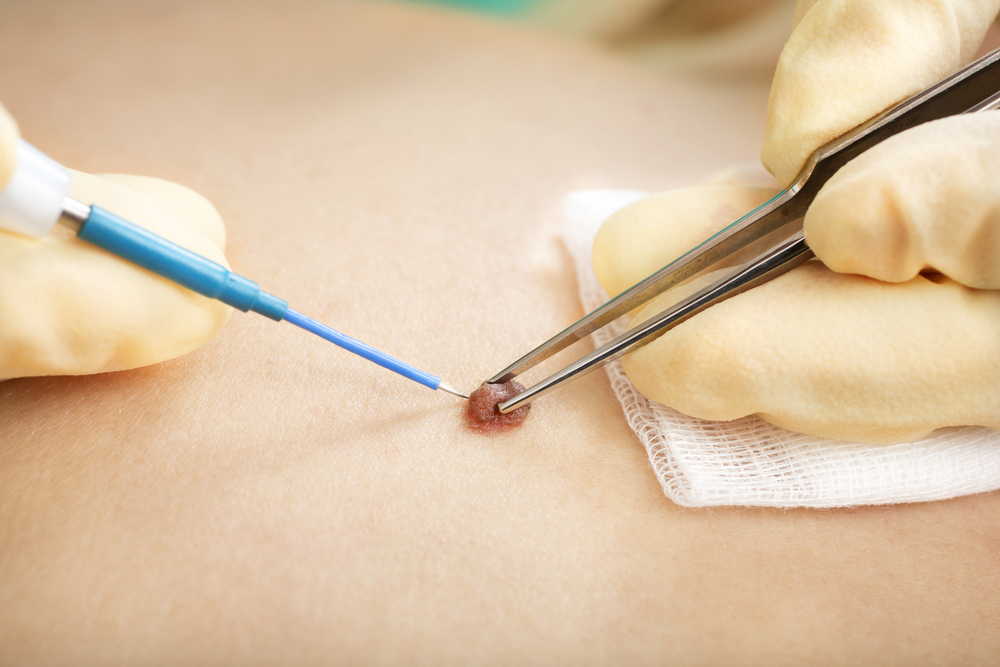 Common, benign moles look the same over time. They might get a little darker during the summer, but they do not usually change shape, color, or symmetry. Be on the alert when a mole starts to evolve or change in any way. Any change in size, shape, color, elevation, or other trait is suspicious. Be cautious when a mole starts bleeding, itching, or crusting, when sensation changes, or if pain develops in the area. 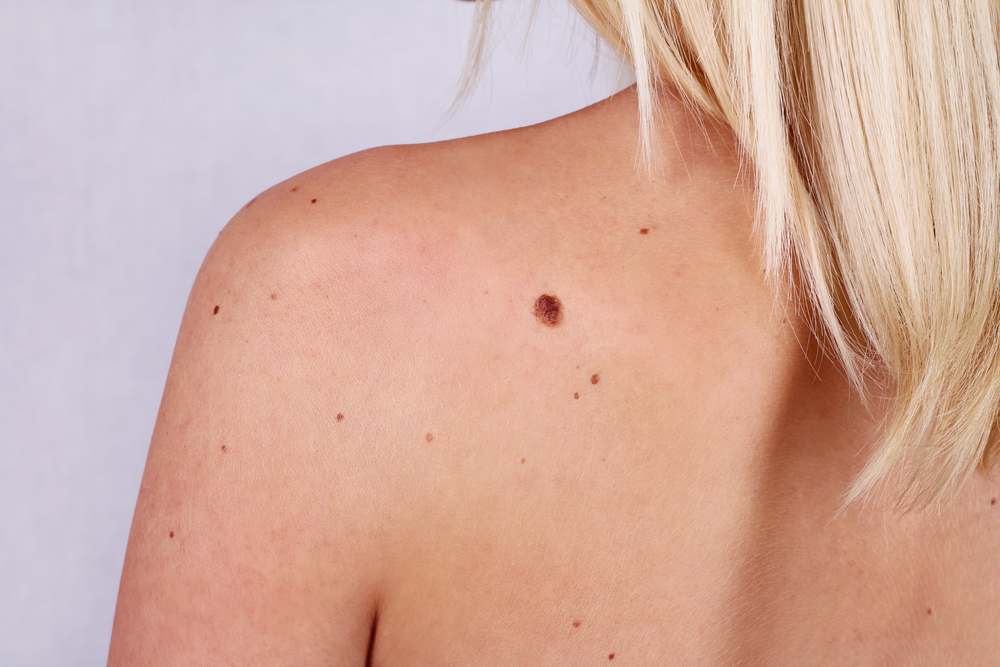 Sometimes, skin melanomas are unbearably itchy. Moles that suddenly begin causing a lot of irritation to the surrounding area should prompt a visit to the doctor or dermatologist. Conditions other than skin cancer, such as allergies and eczema, can also cause itching of the skin. However, if the itching is concentrated around a particular mole, it is a good idea to get it checked out. 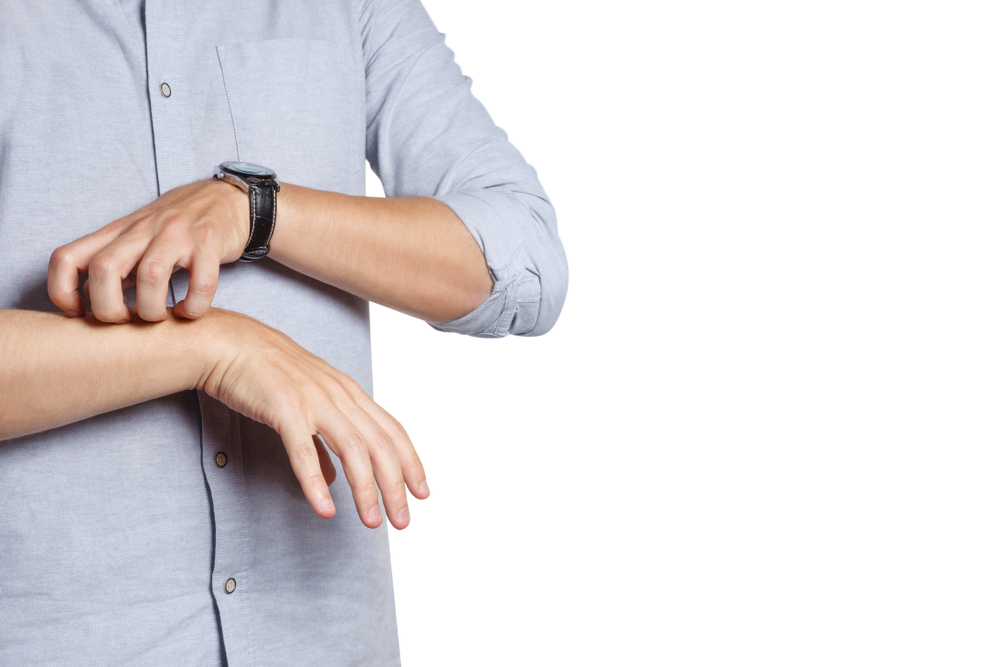 Healthy moles should not be painful or uncomfortable. See a doctor as soon as possible when any moles begin hurting for no reason, particularly if the problematic growth has any of the other characteristic signs of melanoma, such as itching or a recent change in color, size, or symmetry. 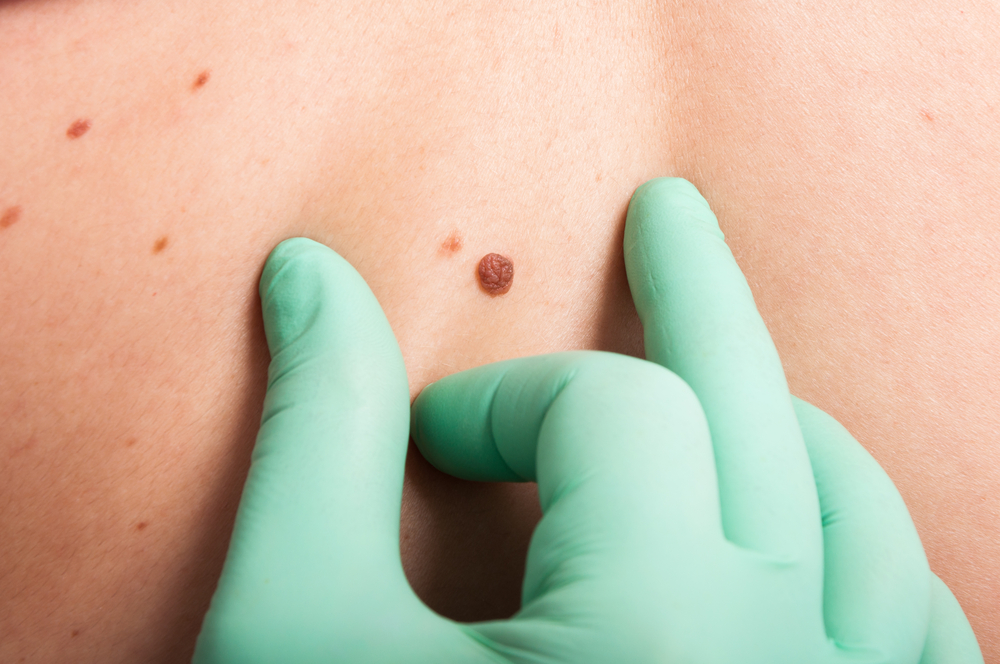 Melanoma in the Eye

Sometimes, melanoma develops in the eye. The symptoms differ slightly from those of skin melanoma. The cancer may only be in the eye, or it may spread to another location, most commonly the liver. Too much exposure to sunlight is a significant risk factor for melanoma, and people with fair skin and blue eyes are most affected. Symptoms of melanoma of the eye include bulging eyes, changes in iris color, poor vision in the affected eye, and red, swollen, or painful eyes. 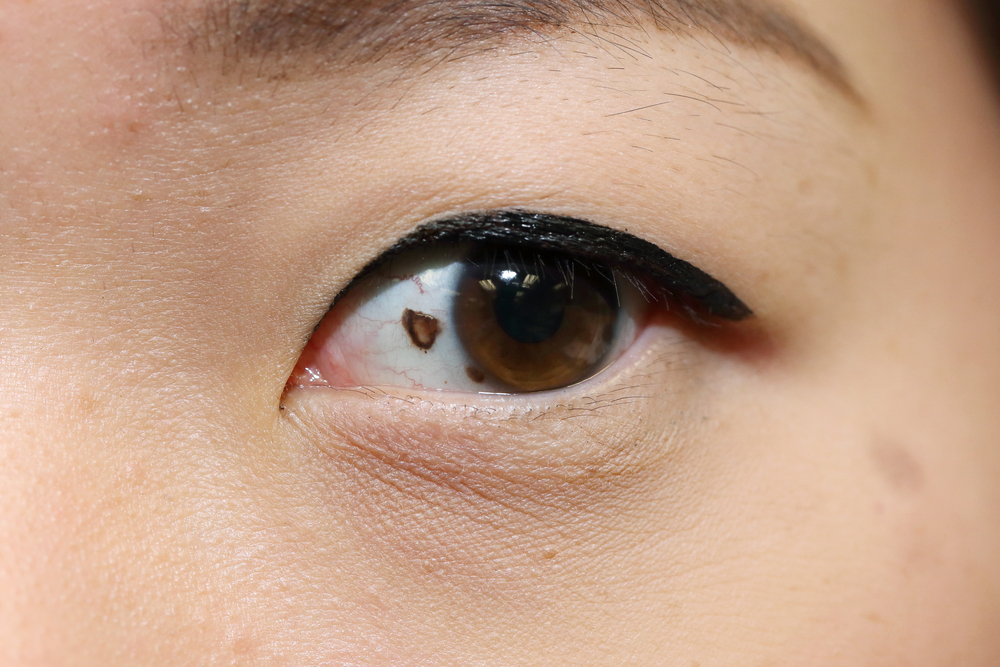 Melanoma Under the Nails

Subungual melanoma is skin cancer under the nail, and it is relatively rare. People of African American heritage, and other individuals with darker skin pigments, are the most often affected individuals. The first indication of subungual melanoma is usually a brown or black discoloration, which is often mistaken for a bruise. If caught early, recovery rates for this type of melanoma are quite high. A biopsy can confirm the diagnosis; doctors may remove or soften the nail to remove a segment of skin to send to a pathologist. 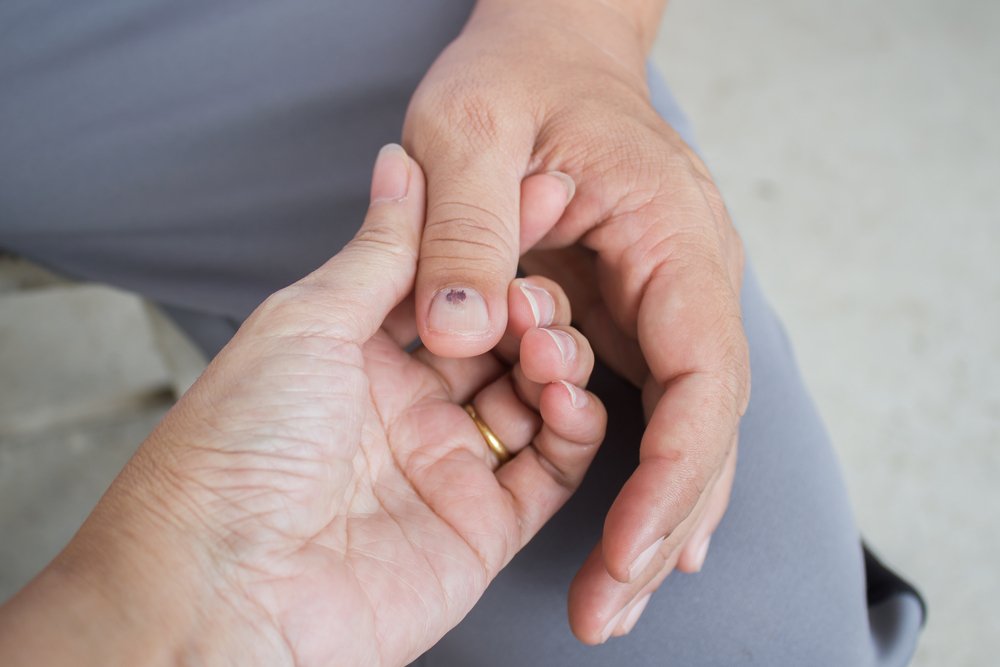 Melanoma in the Mouth

Mouth cancer or oral cancer occurs when a tumor develops on the surface of the tongue, mouth, lips, or gums. Tumors can also occur in the salivary glands, tonsils, and pharynx, the part of the throat leading from the mouth to the windpipe, but these locations are less common and usually occur as part of a syndrome. Symptoms of melanoma of the mouth include red or white patches on the lining of the mouth or tongue, ulcers, lumps, and pain while eating and swallowing. Oral pigmentation can also occur, ranging from light brown to blue-black, red, or purple. Like skin melanomas, they are usually multiple colors. 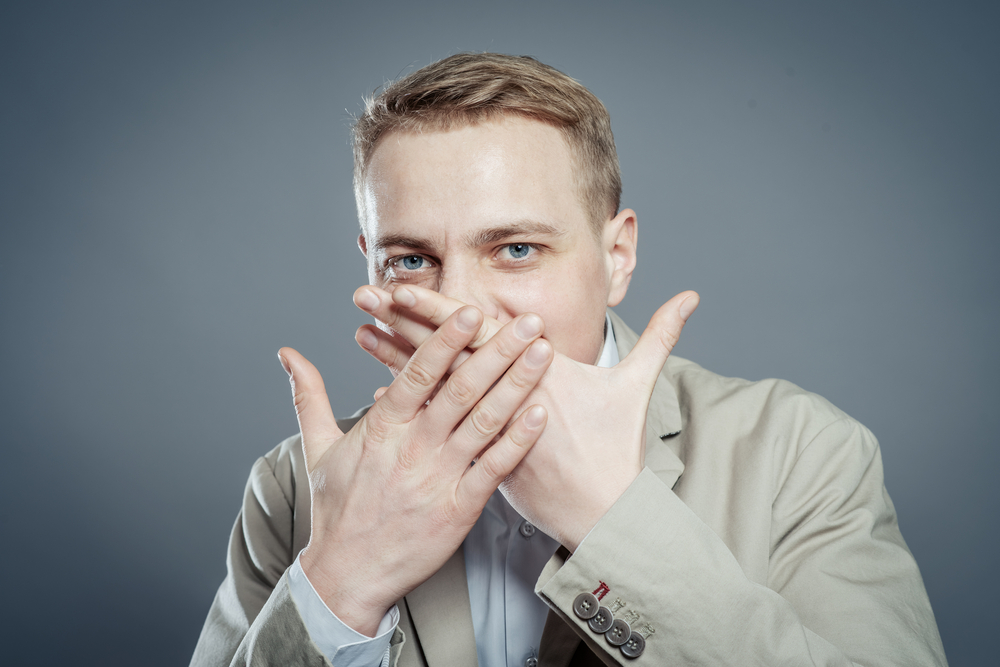