What Are Easy Gumbo Recipes?

Modern gumbo came from Louisiana French culture and cuisine. It is the official state cuisine of Louisiana, although the dish originated in West Africa. Gumbo also has roots in German and Spanish cuisines.

Gumbo usually contains meat or shellfish stock, a thickening ingredient, and vegetables. The "Holy Trinity" of gumbo vegetables include celery, bell peppers, and onions. Different types of gumbo are often named according to their thickening ingredients. Traditional gumbo dishes in Louisiana are thickened with roux, okra, or dried sassafras leaves known as 'filé.'

Roux is made with white flour and fat. Several types of oil and animal fat are used to give roux a rich flavor and thick consistency. Adjust roux recipes for larger or smaller amounts by using equal amounts of oil and flour. A basic roux recipe requires 1-cup of oil or fat and 1-cup of flour. Lard, bacon grease, and vegetable oil are common ingredients.

Heat the oil in a large skillet and slowly add flour while stirring constantly. Reduce heat to the lowest setting and cook the roux for 45 to 60 minutes. Stir frequently to avoid burning. 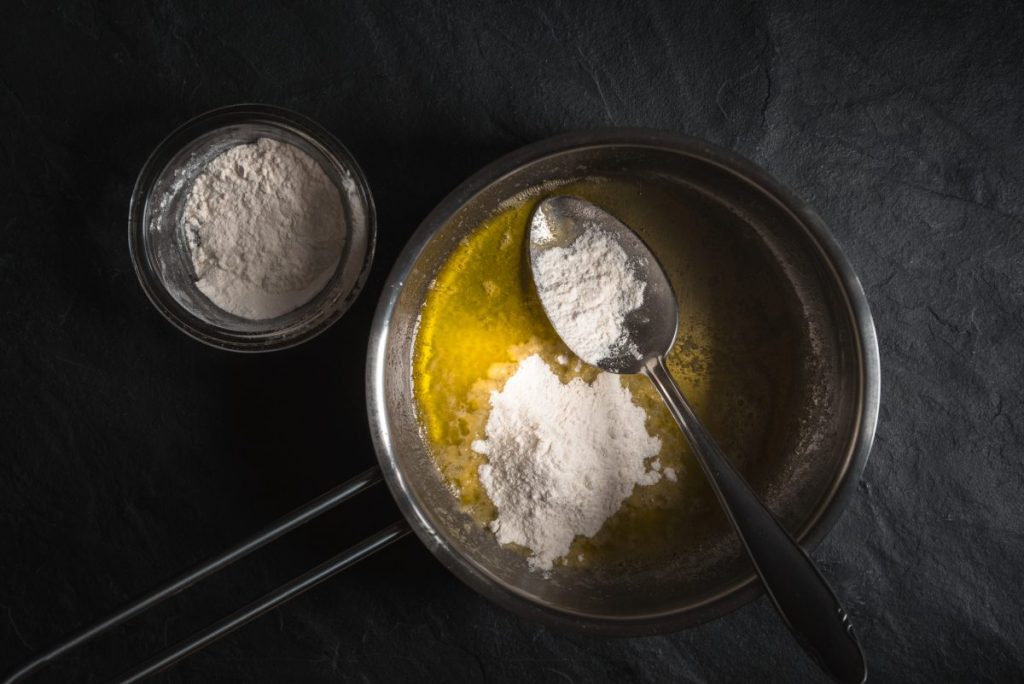 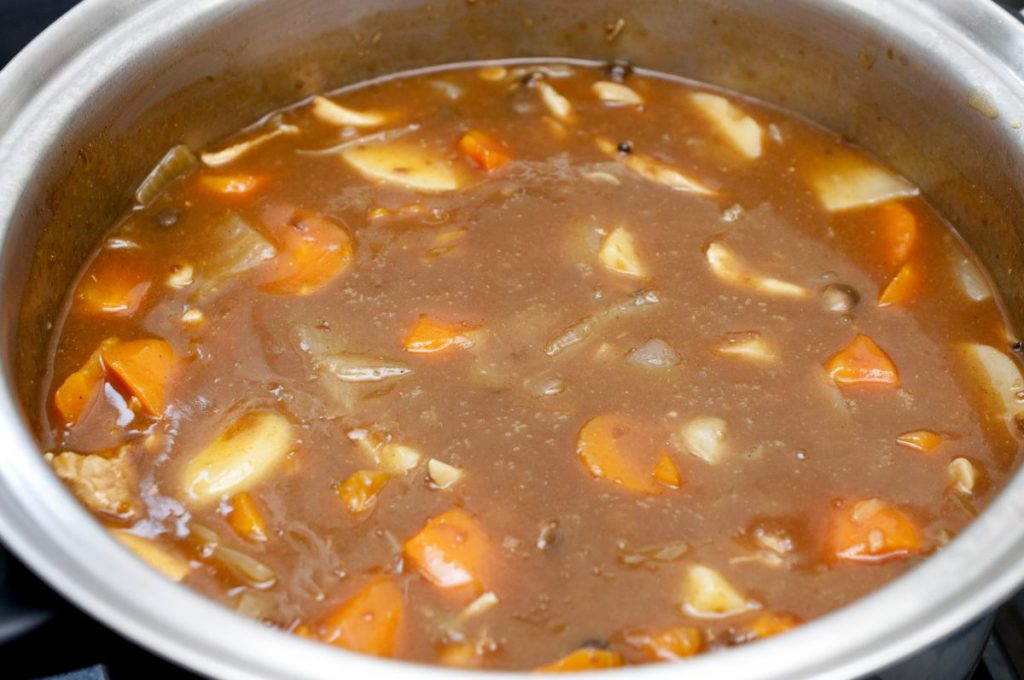 Pour the roux into a large cast-iron skillet and heat for 7 minutes. Stir in the chicken broth, shredded chicken, and sausage. Increase the heat to bring the gumbo to a boil. Reduce the heat to a low simmer, then add peas, onions, peppers, and garlic. Simmer the mixture for 20 minutes, then add the shrimp. Cook everything together until the shrimp turns pink. 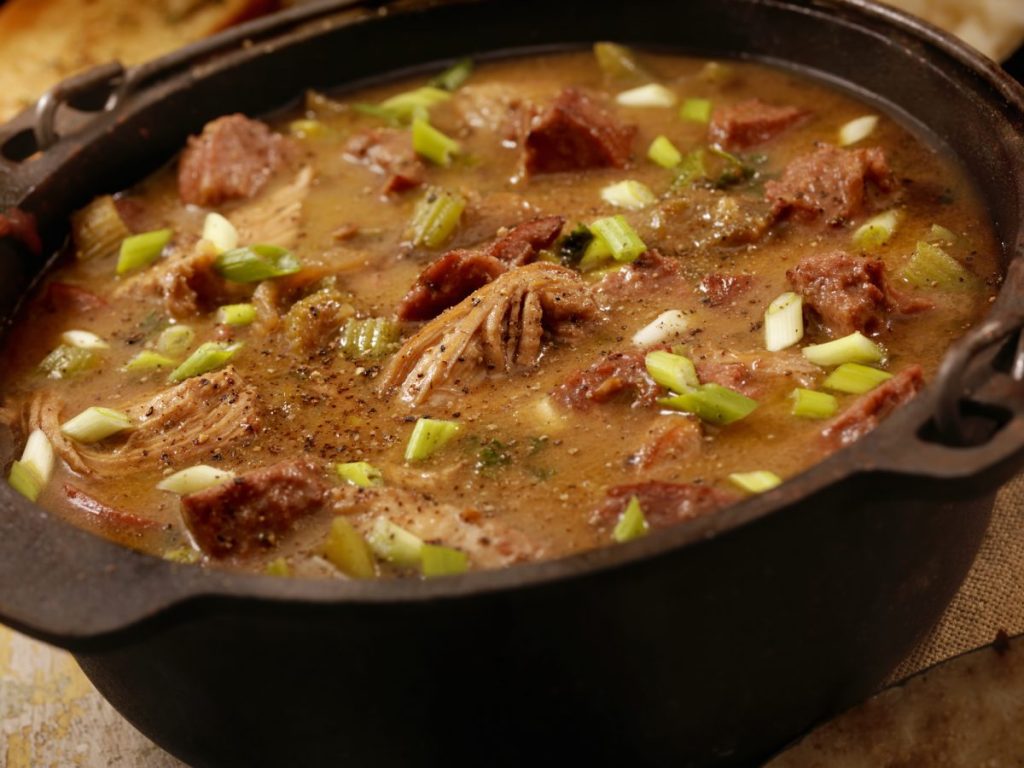 Cook and drain the rice, and season the chicken with salt and pepper. Coat a saucepan with cooking spray to saute chicken for 5 minutes. Add the broth and water, then bring the mixture to a boil. Reduce the heat to a simmer for 20 minutes, then remove the chicken. Add the roux, onion, pepper, celery, and garlic to a large skillet to cook for 4 minutes. Shred the cooked chicken. Add the liquid from the saucepan, chicken, okra, and hot sauce to the skillet and cook for 3 minutes. Serve over rice. 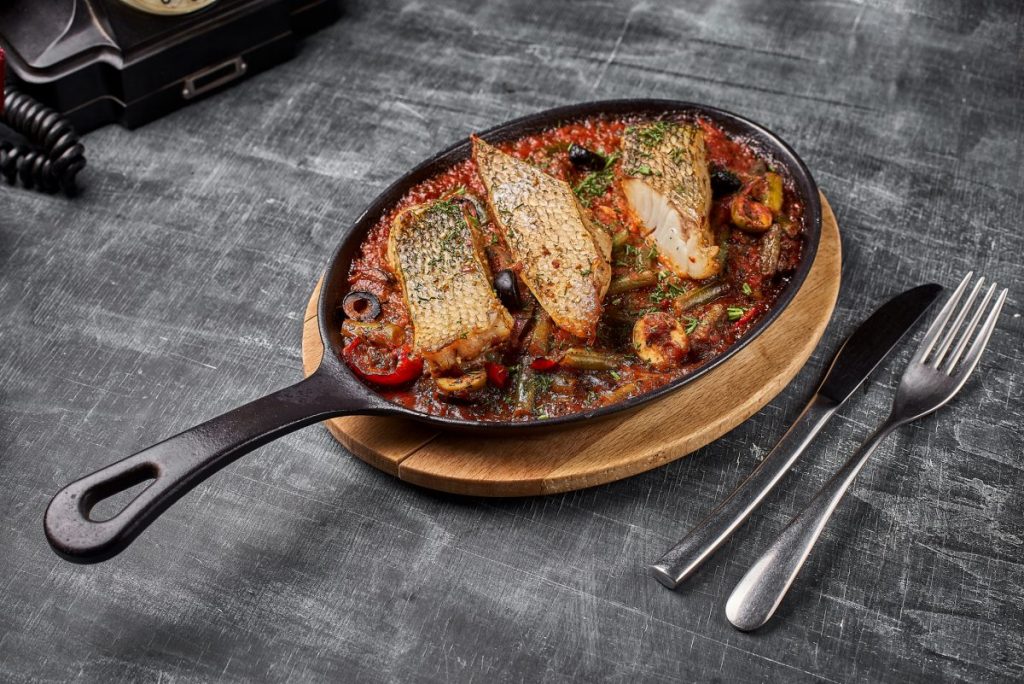 Saute the roux and diced onions in a large cast-iron skillet for 4 minutes. Slowly stir in the rest of the ingredients, except for the rice, crawfish, and crab. Simmer the gumbo for an hour while stirring frequently. Add the crawfish and crab, then bring gumbo to a boil. Reduce heat and simmer for 25 minutes. Serve the hot gumbo over rice. 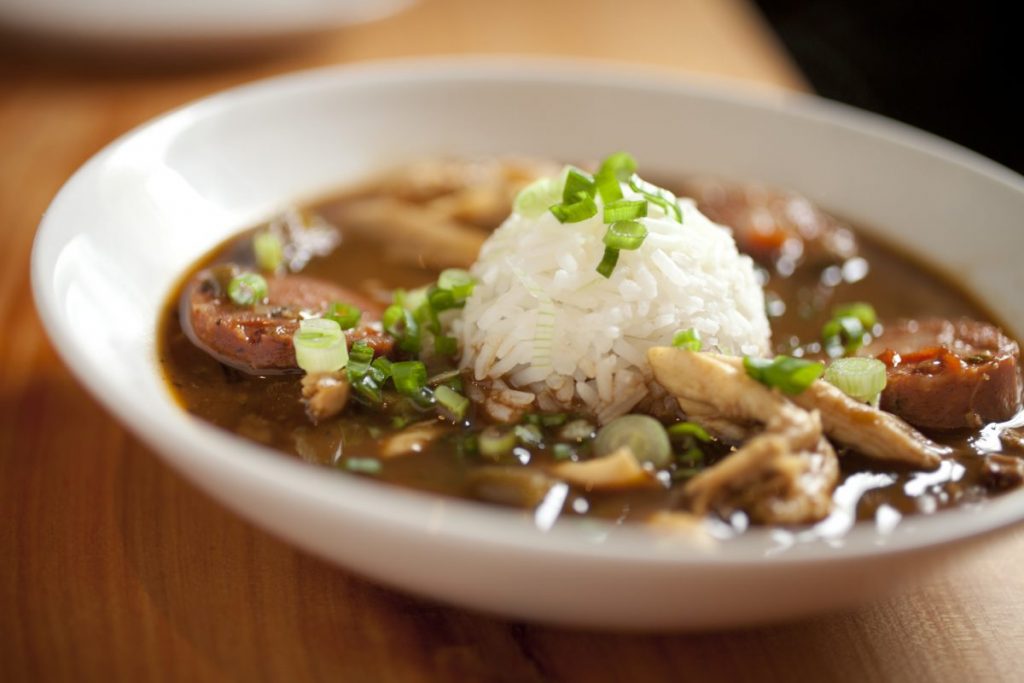 Heat the vegetable oil in a large skillet and saute the onions for 2 minutes. Add sausages and cook until sausage is lightly browned. Stir in the peppers and garlic, then add tomatoes and juice, chicken broth, chili sauce, and dry seasonings. Bring the mixture to a boil for 2 minutes. Stir in the cooked rice and shrimp. Cook everything for 3-4 minutes before serving. 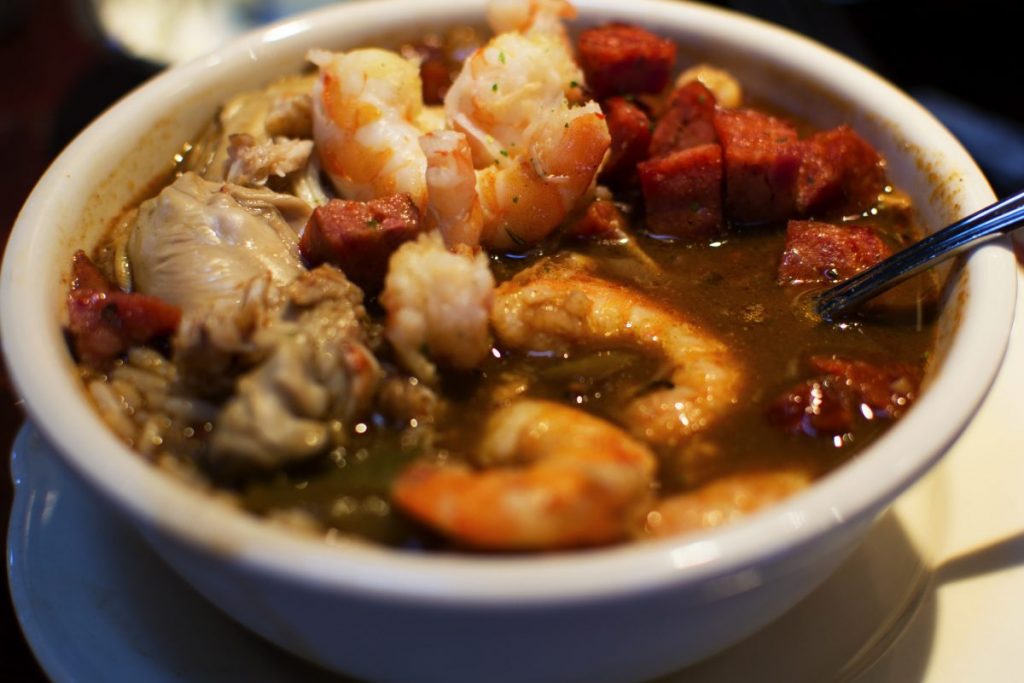 Cook the pasta and keep it warm. Cook the sausage in a large skillet until it is lightly brown. Add the bell peppers and saute for 6 minutes, then add flour and Cajun seasoning. Cook for 2 minutes while stirring frequently. Slowly add the milk and cheeses. Let the mixture simmer and stir continuously until it is completely smooth. Serve the gumbo over pasta. 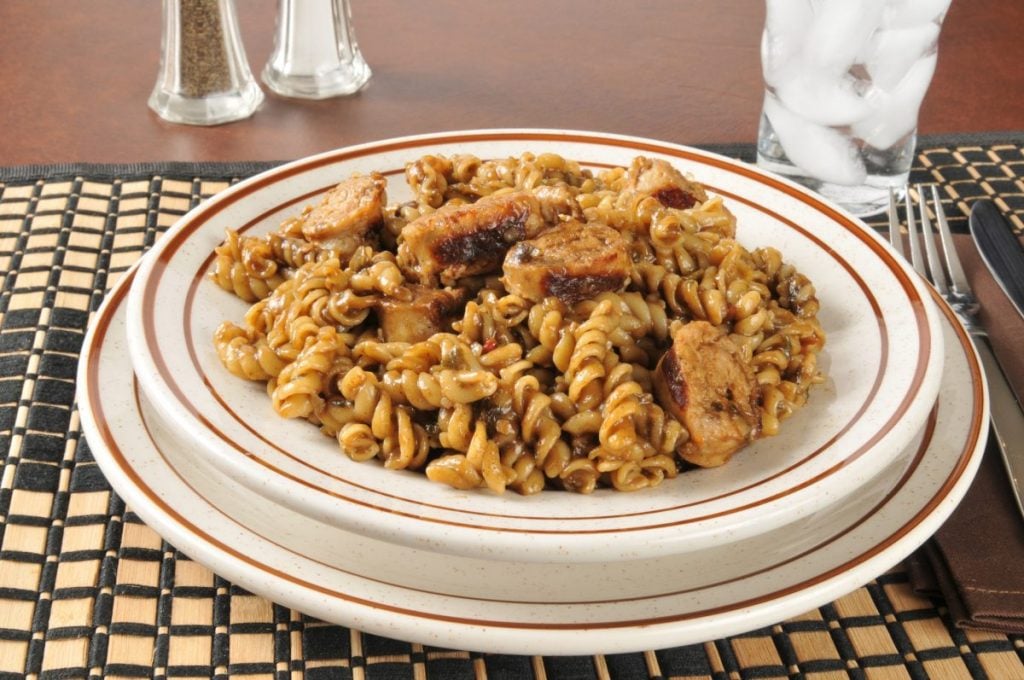 Heat the onions, celery, bell peppers, and roux in a large pot on high heat. Add the garlic, hot sauce, salt, and pepper. Bring the gumbo to a boil. Add the crabs and simmer for approximately 45 minutes, then add sausage and cook for 1 hour. Stir in the shrimp and chicken, and cook 15 to 20 more minutes. Serve gumbo over rice and top with filé powder. 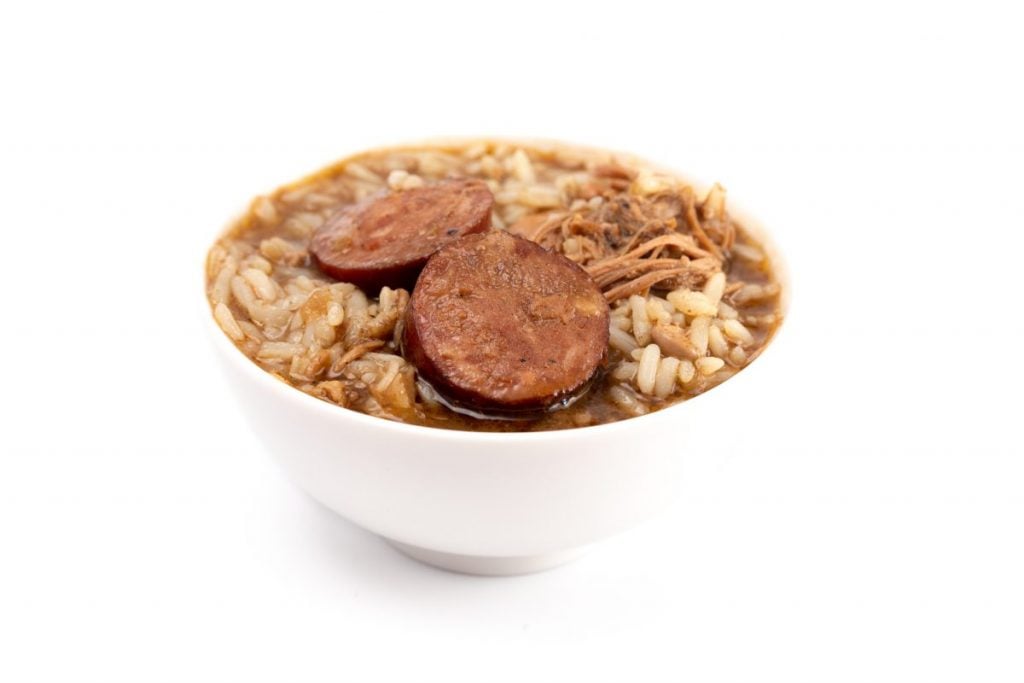 Saute the oil, celery, mushrooms, and onions in a large skillet for 7 minutes. Add okra, green peppers, chile, garlic, and cumin, and saute another 4 minutes. Stir in the rice, potatoes, and broth. Bring the mixture to a boil. Cover the skillet and simmer on low heat for 40 minutes. Add beans, parsley, and salt, then heat the gumbo for 3 minutes. Serve with cornbread. 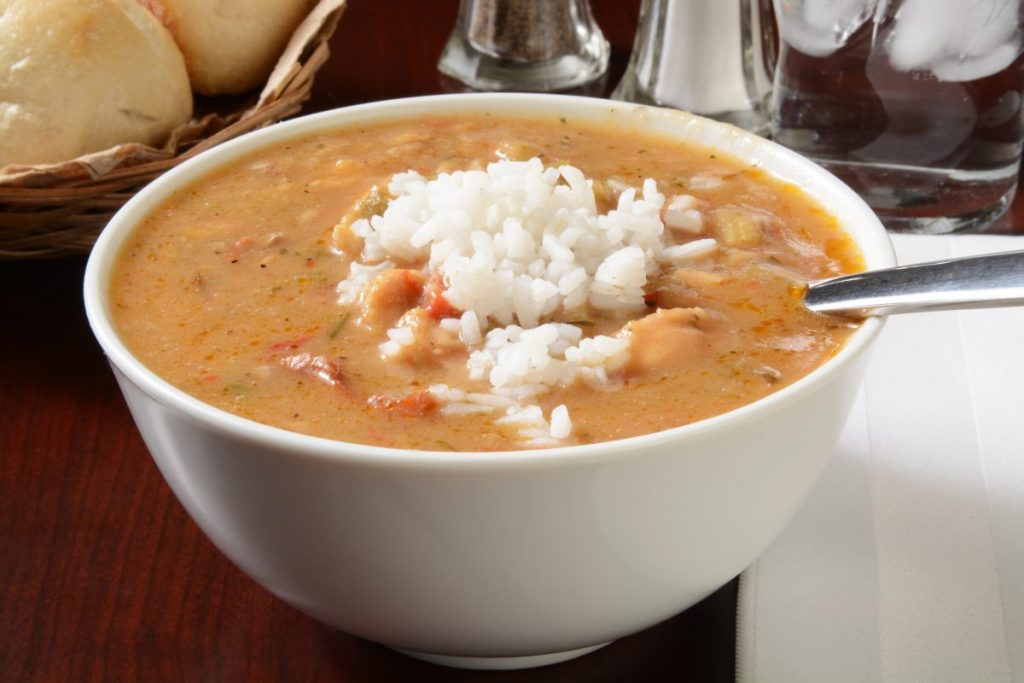 Heat the roux in a large skillet and stir in bell peppers, celery, onion, garlic, and okra. Cook for 5 minutes. Stir in the vegetable broth slowly, then add cauliflower, tomatoes, mushrooms and cayenne powder. Season with salt and black pepper according to personal taste. Reduce heat and let the gumbo simmer for 10 minutes. Serve the gumbo over rice. 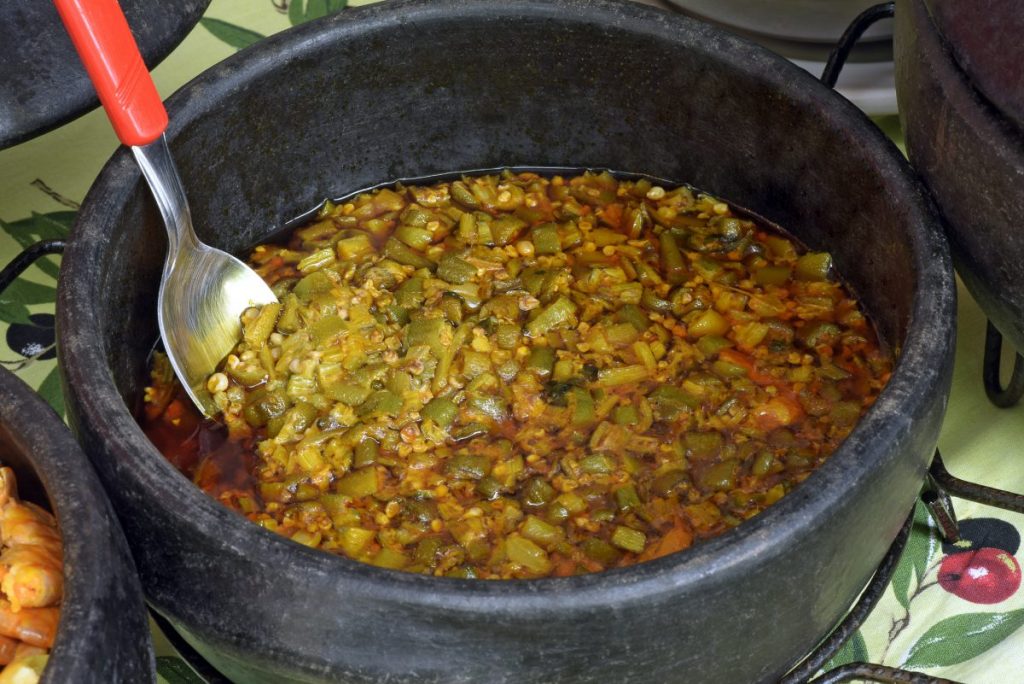