Quinoa is a versatile and delicious super grain. The nutritious grain is rich in proteins, essential minerals, and fiber. The iron, magnesium, and potassium that’s found in quinoa help support a healthy immune system, while the fiber helps you maintain a healthy weight. Not only is quinoa one of the most nutritious grains you can eat, but it’s also super easy to cook and tastes great too!

Anyone can incorporate more quinoa into their diets, and there are countless tasty recipes to help.

Quinoa acts as a ground beef substitute in this mouth-watering vegetarian chili. To make this recipe, start by cooking one cup of dry quinoa with two cups of vegetable broth. In a separate bowl, make the spice mixture by combining one tablespoon cumin, two tablespoons chili powder, one teaspoon of oregano, and a half teaspoon of smoked paprika. Leave the quinoa and spice mixture while you prepare the rest of the chili.

Sauté yellow onion and four cloves of garlic in olive oil. Once the onion is translucent, add one diced green pepper and one diced red pepper. Sauté peppers for two minutes before adding two cans of crushed tomatoes, one cup frozen corn, one can of black beans, and the spice mix. Simmer the chili until vegetables are tender. Stir in the quinoa and allow the chili to sit so that the quinoa soaks up all of the flavors. 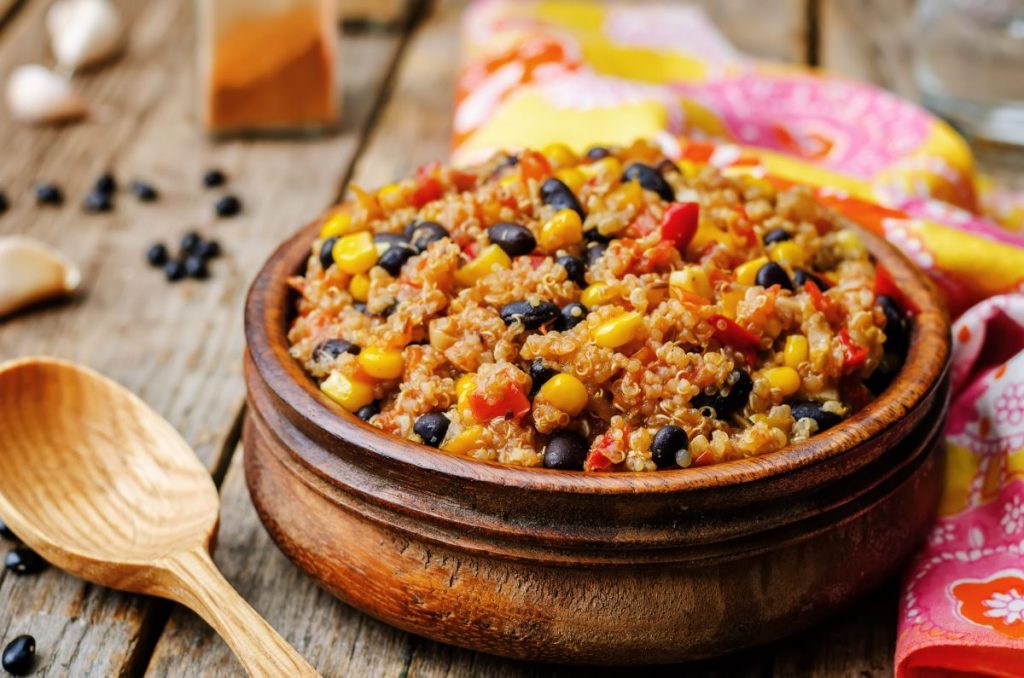 This chocolatey quinoa recipe is like a decadent brownie that you can eat for breakfast. Oh, and it’s super healthy, of course! Cook one cup dry quinoa in one cup of almond milk and one cup of light coconut milk. Once the quinoa is cooked, and all of the milk has been absorbed, remove the quinoa from the heat. 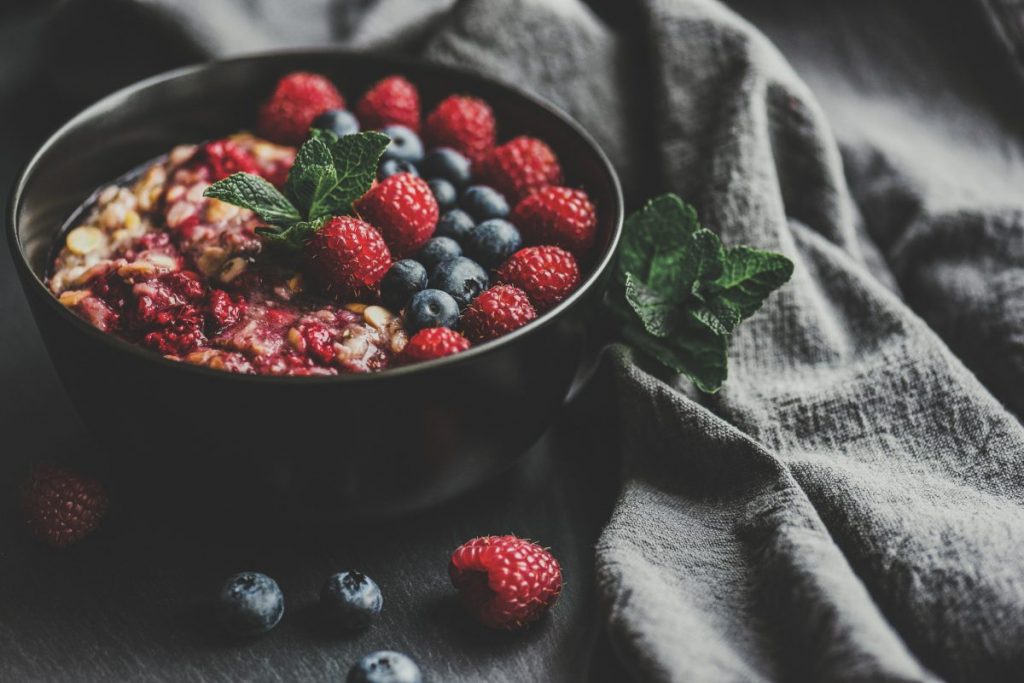 Lemon and Basil Quinoa Salad with Asparagus and Peas

Green peas and fresh asparagus make this salad the perfect meal for spring. Start this recipe by making the dressing. Whisk together three tablespoons of extra virgin olive oil and lemon juice with one teaspoon of honey, one minced clove of garlic, one tablespoon of chopped basil, and salt and pepper.

In a separate bowl, mix together two cups of cooked quinoa, one small bunch of cooked asparagus cut into one-inch pieces, one cup of peas, one cubed avocado, a quarter cup of chopped basil, and salt and pepper to taste. Pour dressing over the salad and toss until lightly coated. 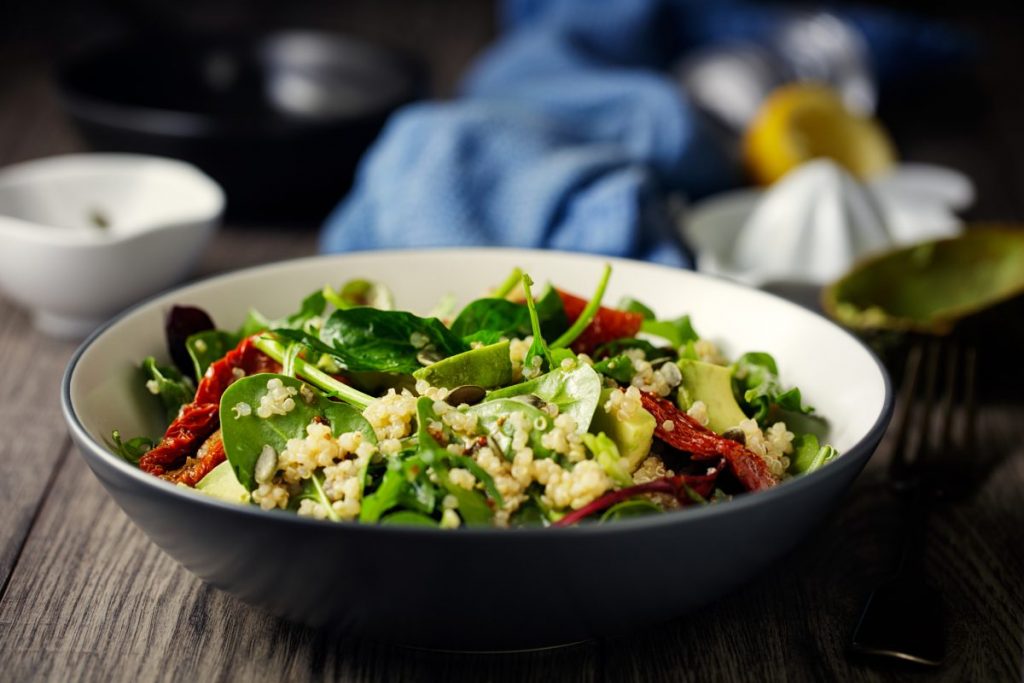 This quinoa enchilada bake is warm, filling, and unbelievably comforting. As an added bonus, it’s also incredibly easy to make!

Spread the quinoa mixture into a baking dish and top with a quarter cup of shredded cheese. Once baked, allow the dish to cool slightly before topping with diced avocado and jalapeño slices. 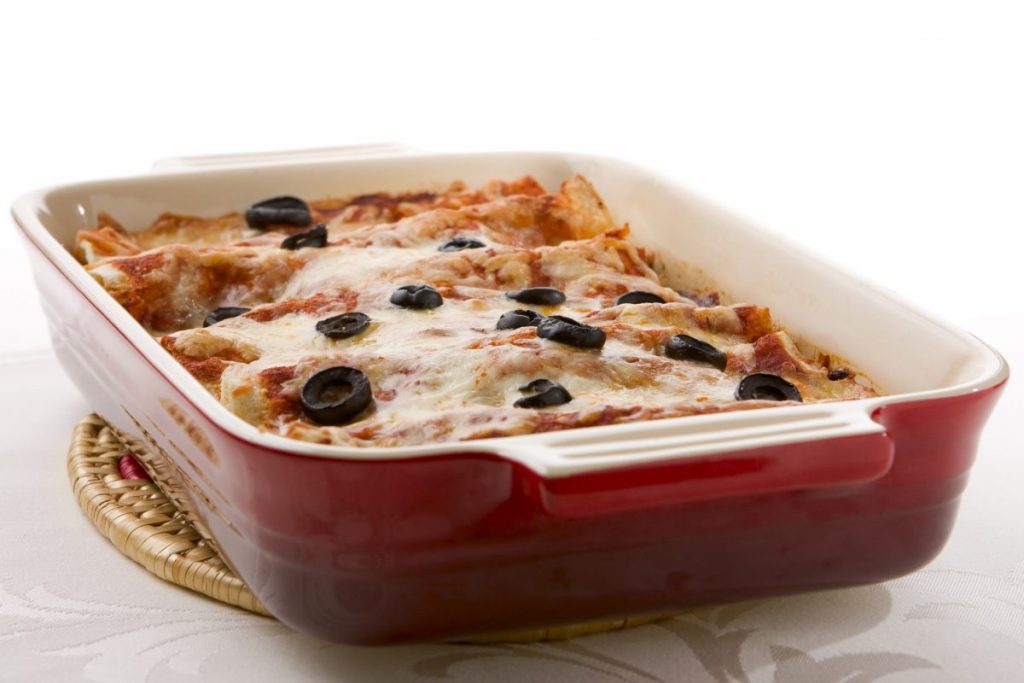 Sweet bell peppers stuffed with spiced quinoa and cheese? Sounds delicious! These stuffed peppers will be your go-to dish for your weekly meal prep in no time.

Cut the tops off of six bell peppers. Remove the seeds and steam the peppers until soft. While the peppers are cooking, add three cups of quinoa, one cup of frozen corn, one can of black beans, half a cup of diced tomatoes, half a cup of cheddar cheese, and a quarter cup of feta to a large bowl. Make a spice mixture by combining one teaspoon of cumin and garlic powder with a half a teaspoon of chili powder. Add the spices to the quinoa mixture.

Stuff each bell pepper with the quinoa mixture, top with more cheddar cheese and bake for about 20 to 25 minutes. Serve piping hot! 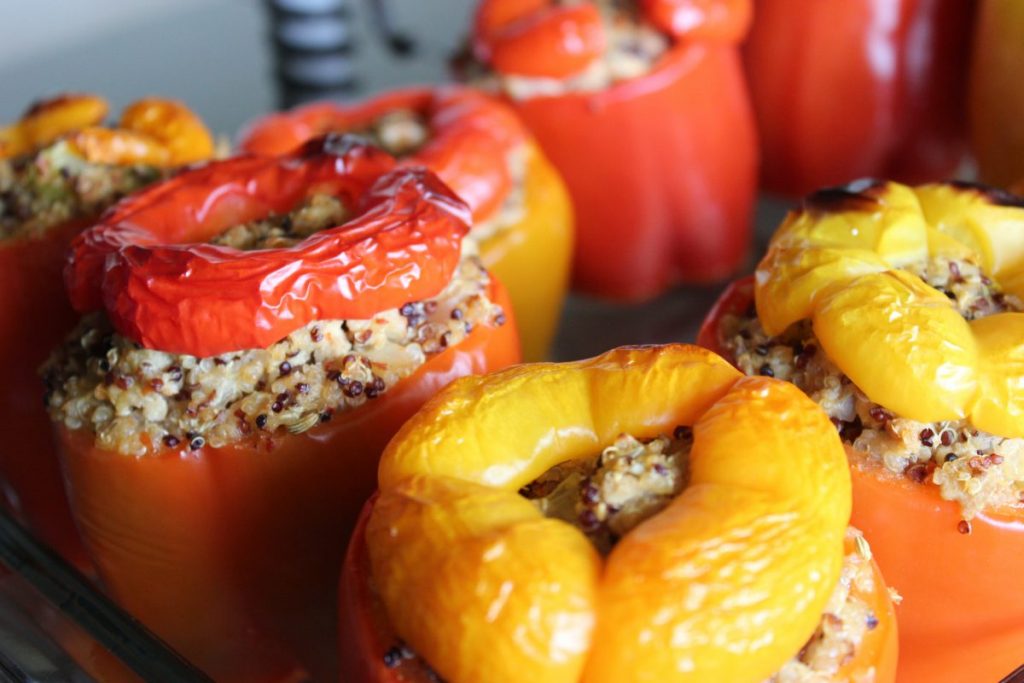 A buddha bowl is a name given to many different vegetarian dishes served cold in large bowls. This buddha bowl uses quinoa as the base to give the dish an extra portion of protein and overall nutrition.

To make this buddha bowl, add half a cup of cooked quinoa to a bowl. On top of the quinoa, add small portions of roasted sweet potatoes, chickpeas, baked tofu, and massaged kale. Top the bowl with a quarter of an avocado and drizzle the dish with your favorite dressing. Get creative with this dish by substituting the sweet potato and chickpeas for your favorite vegetable and legume! 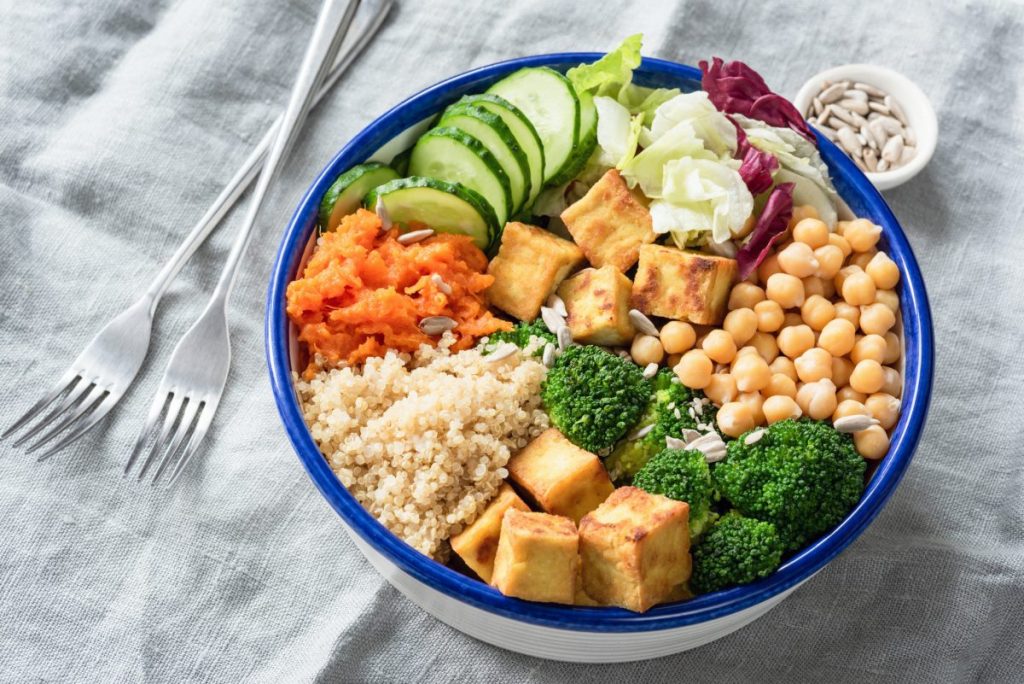 Crispy garlic, tender cremini mushrooms, and aromatic thyme make this unlike any other quinoa dish out there. This dish can be prepared in under 30 minutes, making it the perfect meal for busy weekdays.

To make this recipe, start by cooking one cup of quinoa with two cups of vegetable broth. In a separate cast iron pan sauté 6 cloves of diced garlic in one tablespoon of olive oil. Turn up the heat and add one pound of thinly sliced cremini mushrooms to the garlic. Sauté mushrooms until tender before taking the pan off the heat and adding two teaspoons of dried thyme.

Once the mushrooms are cooked, add the cooked quinoa to the garlicky mushrooms. Stir in half a cup of parmesan and add salt and pepper to taste. Serve warm as the main meal or as a hearty side dish. 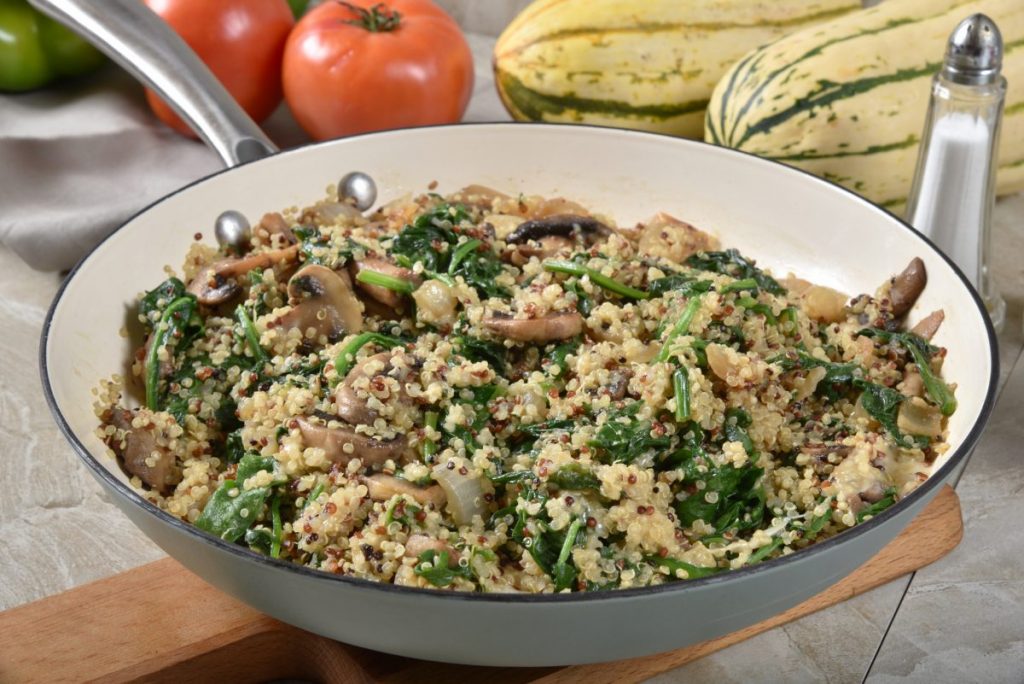 Strawberries and balsamic vinegar have always paired perfectly. In this new take on a classic salad, quinoa adds extra flavor and protein to make this into a substantial meal. To make this dish even easier, prepare the quinoa the night before and store it in the refrigerator.

To start, make the salad dressing by combining two tablespoons of extra virgin olive oil, two tablespoons of honey, and one tablespoon of balsamic vinegar. Next, add the cooked quinoa to a large salad bowl. To the quinoa, add one cup of fresh mozzarella balls, one large diced cucumber, two cups of sliced strawberries, and three tablespoons of chopped basil. Drizzle the dressing over the salad and toss until coated. Add salt and pepper to taste. Serve this salad cold on a hot day! 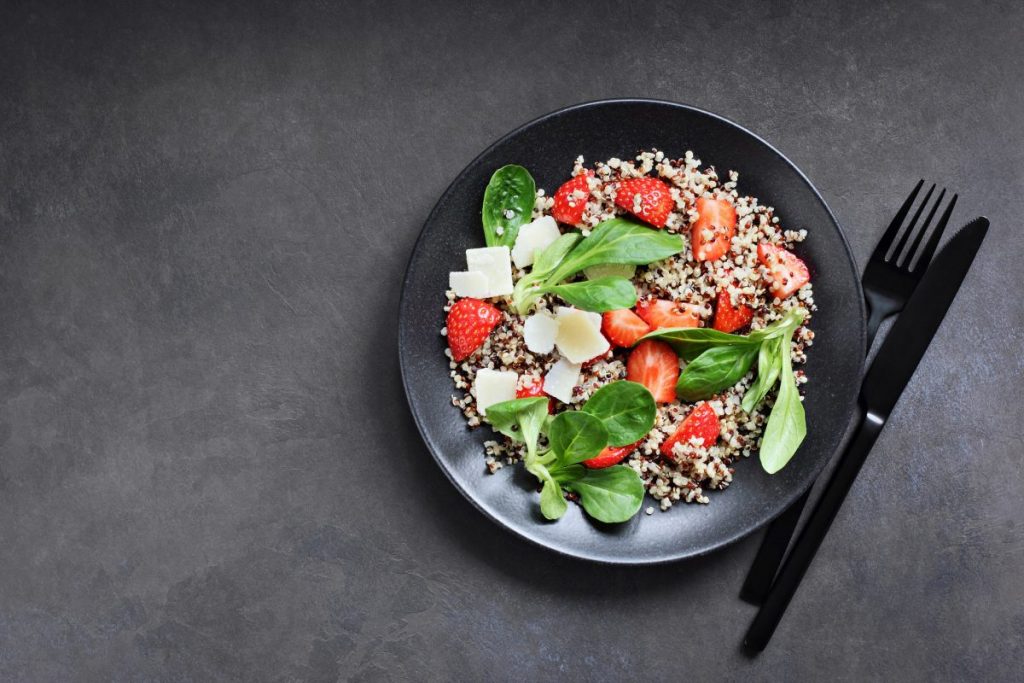 Quinoa replaces breadcrumbs in this healthier version of a classic meatball recipe. This recipe is easy to make and only uses two dishes!

Combine all of the ingredients in one large bowl until they’re well mixed. Shape the mixture into small balls and bake at 400 degrees Fahrenheit until brown and well-cooked. Serve these meatballs hot in a variety of dishes. 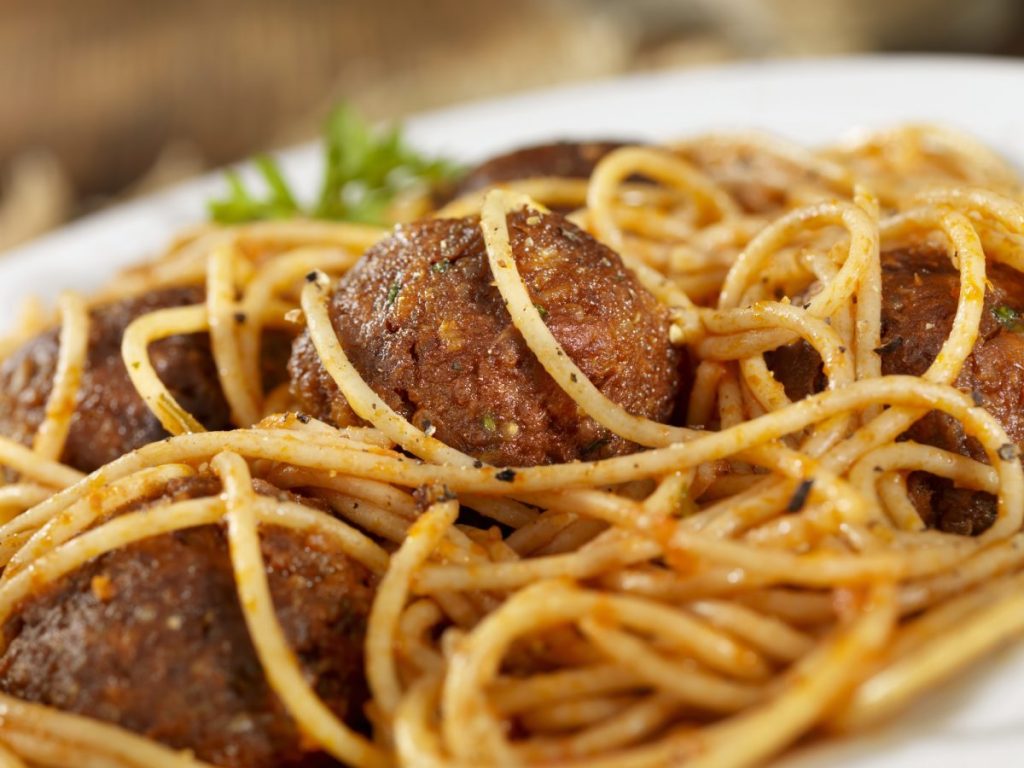 This warm, cheesy casserole ticks all of the boxes. It’s creamy, hearty, delicious, and nutritious!

Cook one cup of quinoa in two cups of vegetable broth until light and fluffy. While the quinoa is cooking, toss broccoli florets in extra virgin olive oil and salt and pepper and roast until slightly caramelized and tender.

Once the broccoli is cooked, combine the quinoa and broccoli with eight ounces of shredded cheddar cheese, one cup of milk, two cloves minced garlic, and salt and pepper in a deep baking dish. Top the mixture with toasted breadcrumbs and more shredded cheese. Bake the casserole at 400 degrees Fahrenheit for 20 to 25 minutes. Serve warm. 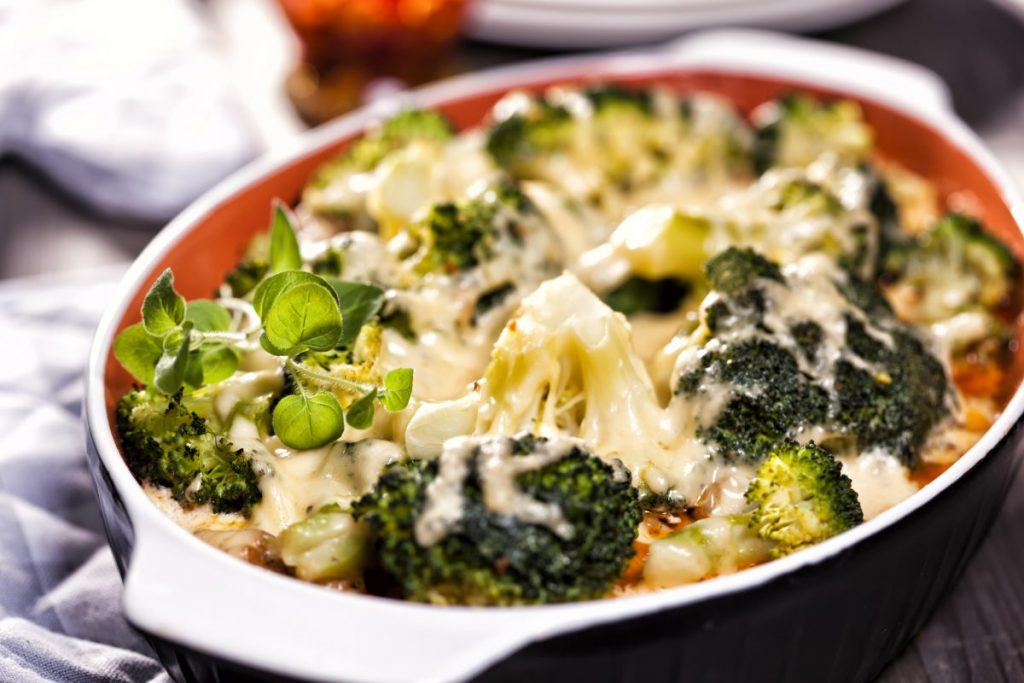