How to Safely Defrost Chicken

Chicken is a great source of lean protein that works well in many types of dishes. It also freezes well, so keeping a small chicken or breast cutlets handy in the freezer is a convenient way to make sure you always have some meat handy for your next meal. Once defrosted, raw chicken requires special handling to prevent the spread of salmonella and other types of pathogenic bacteria responsible for food poisoning. Learning how to properly defrost chicken will ensure your chicken thaws in time for your next venture into cooking without compromising best food safety practices.

The one thing to avoid when handling raw chicken is cross-contamination. This means having the juices from the raw meat touching other foods you’re likely to eat raw, such as fruits and certain vegetables. One of the best ways to avoid this is to consistently use a dedicated plastic cutting board, preferably one that's color-coded so you always know you're using the right board when preparing raw chicken. Plastic cutting boards are easy to wash off with soap and hot water or can be popped into the dishwasher. 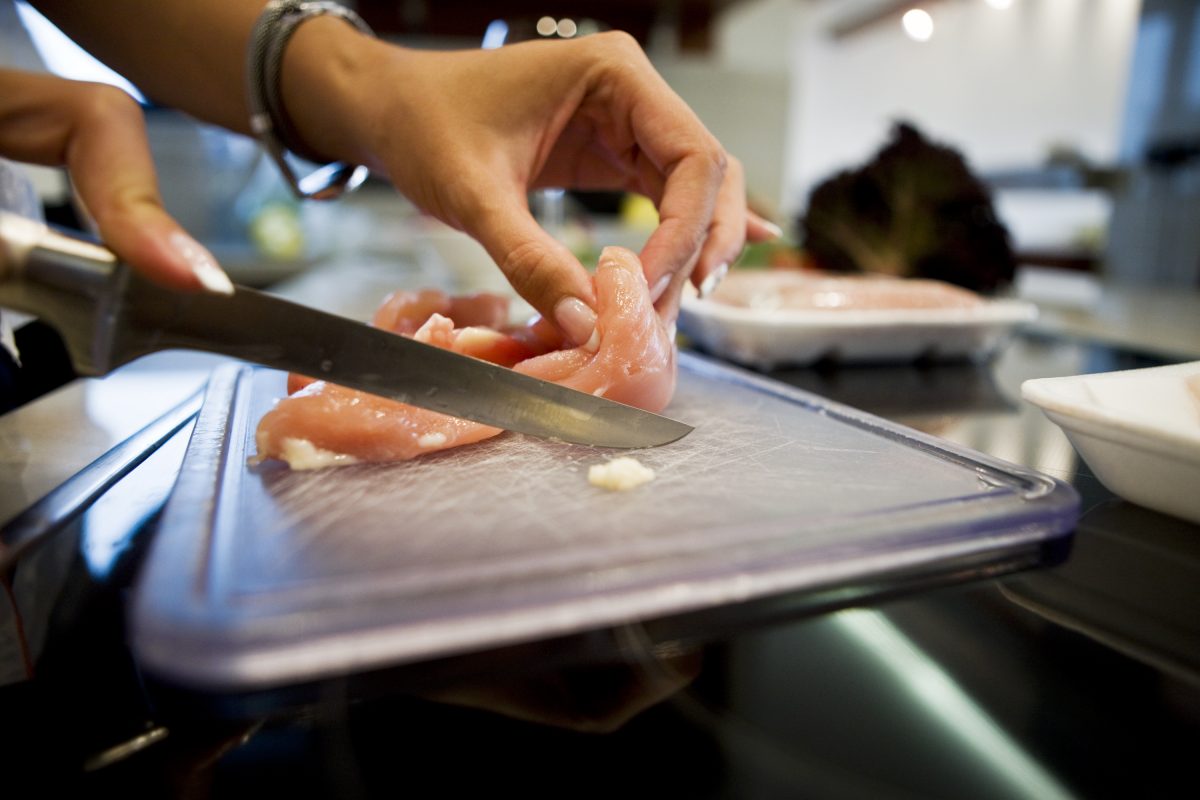 Thawing in the fridge

To thaw chicken in the fridge, keep it sealed in a freezer bag and place it in a deep dish at the bottom of the fridge, so there is no chance of accidentally contaminating other foods. Thawing time will vary depending on the cut and size of your chicken, but thawing a whole chicken in the fridge can take at least a day to fully defrost. Take your chicken out of the freezer the night before you want to cook with it to make sure it's thawed and ready. 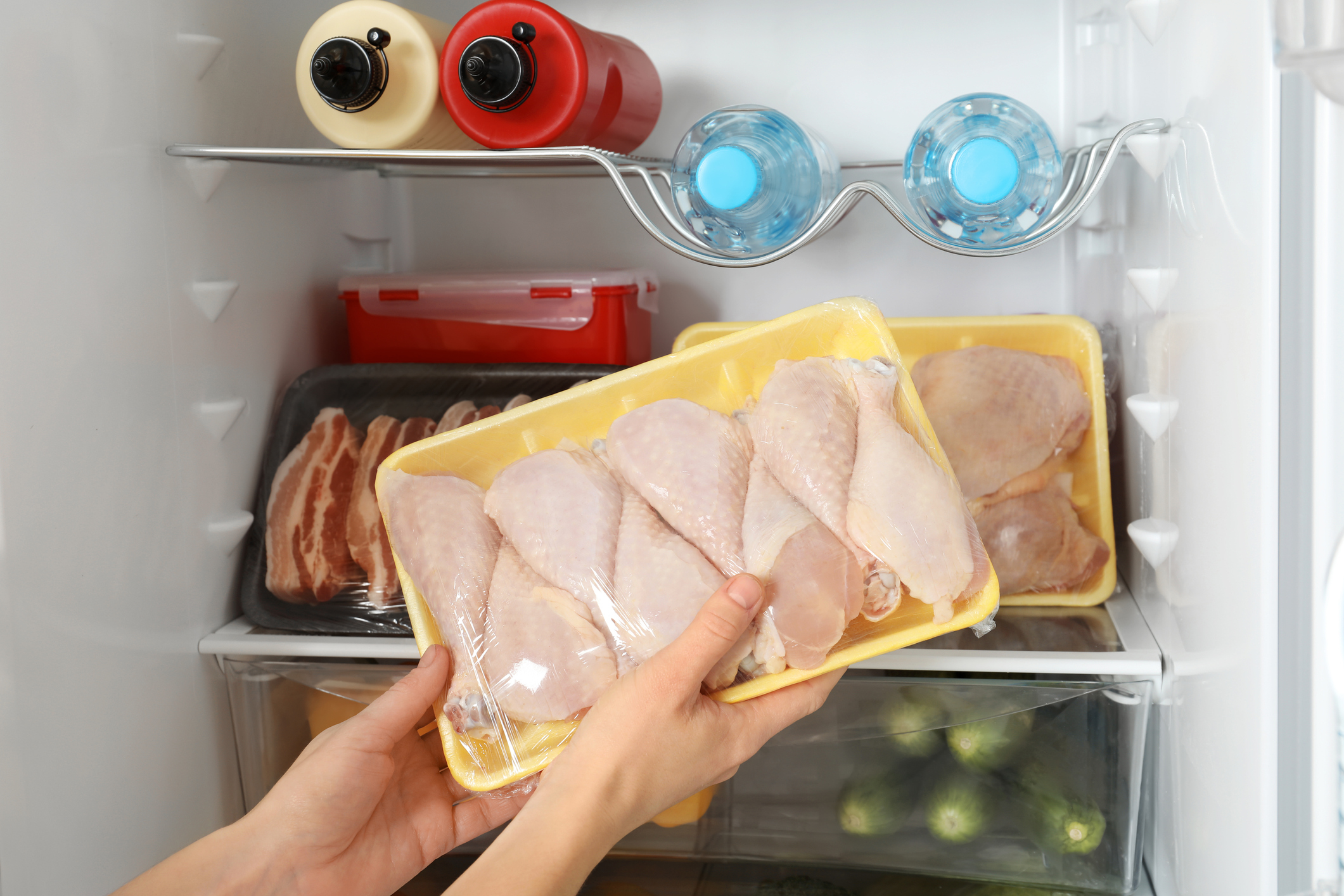 Defrosting in a water bath

When defrosting a chicken with a water bath, make sure the water is cold, not warm or hot. The higher water temperature increases the risk of bacteria growth on the meat. Make sure your chicken is in a watertight bag and submerge it in the large water-filled bowl. Change the water every half hour, until the meat is properly defrosted. 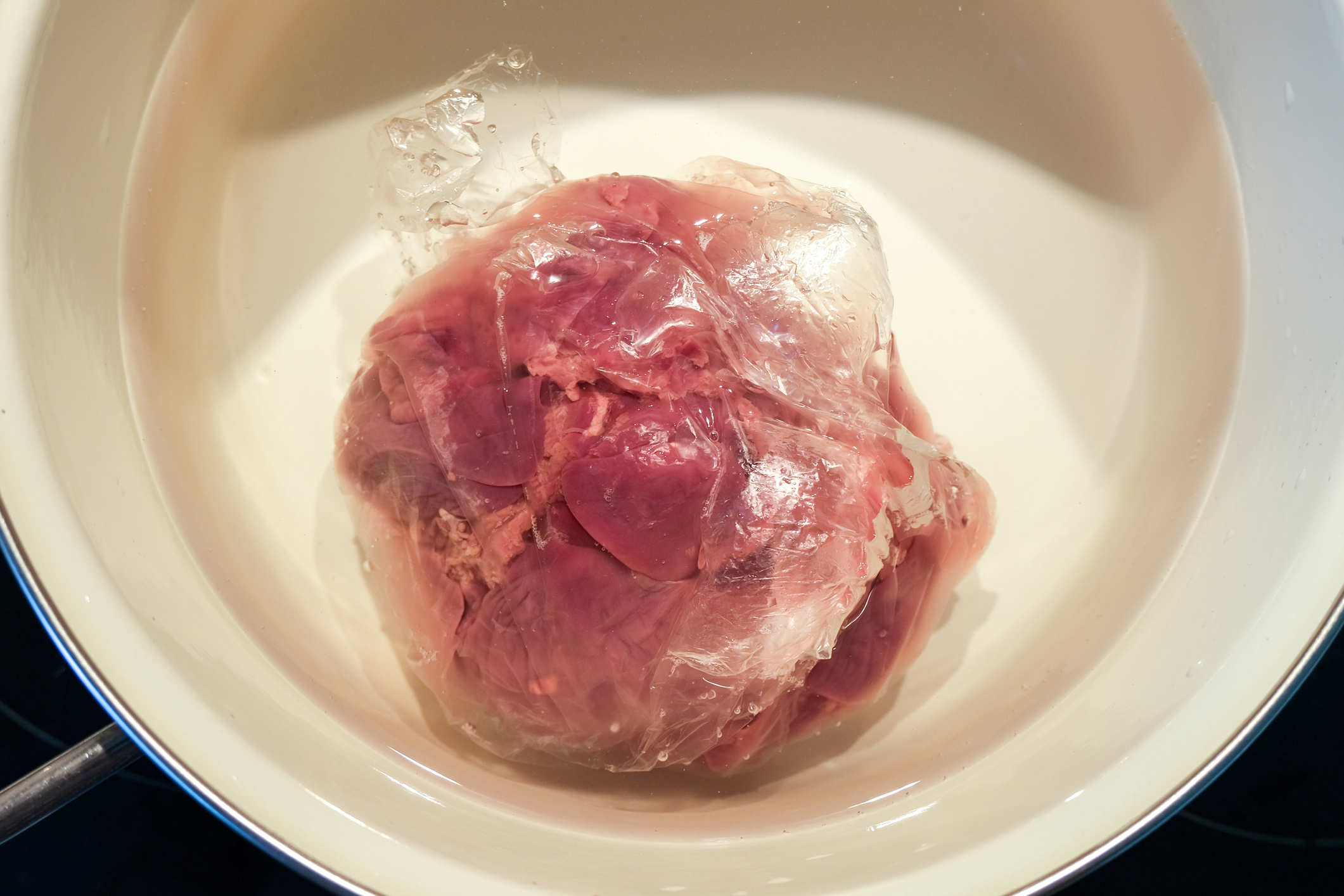 Defrosting in a microwave can be simple, considering that most have it as a built-in setting. Place the chicken on a microwavable dish and defrost it for 1 to 2 minutes at a time, and check the meat each time before putting it back in the microwave to defrost more. Using the defrost setting won't keep the chicken from cooking if it's left in the microwave for too long, so be sure monitor the defrosting process carefully. 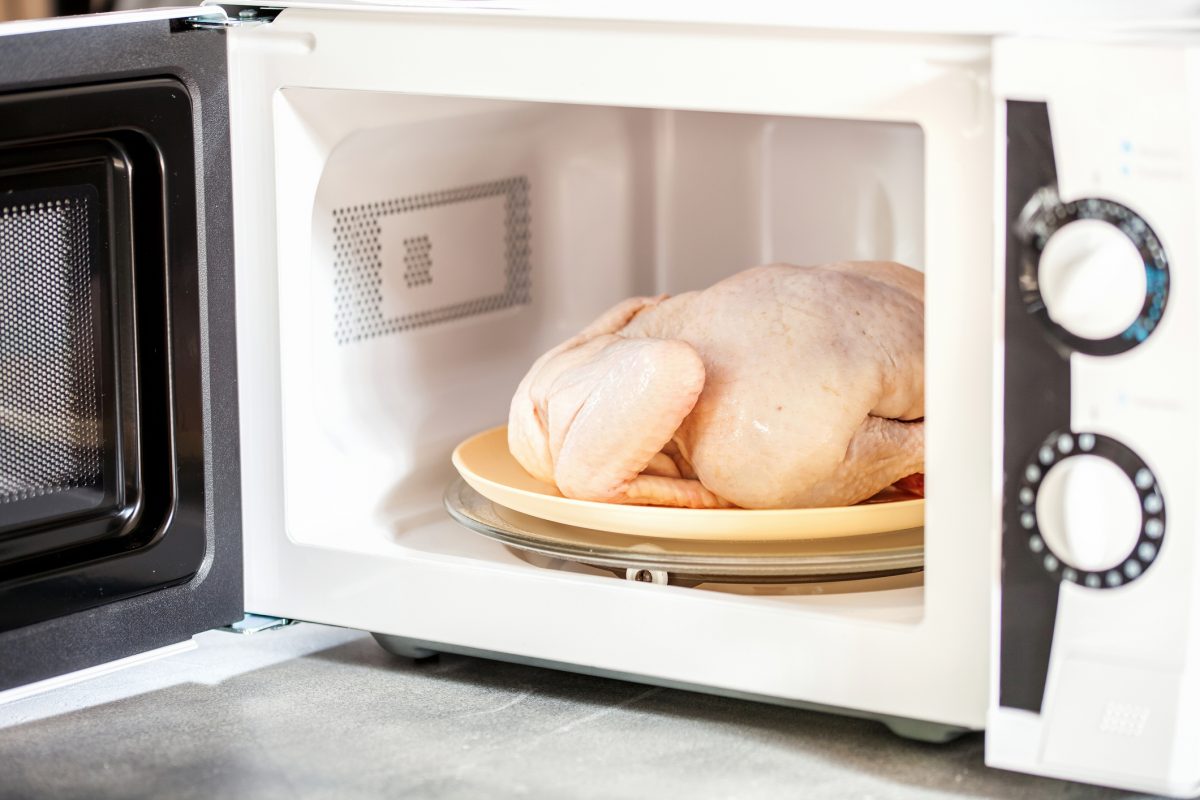 In a pinch, there may be times when cooking a chicken from frozen is a necessity. While it can be done, there are a couple of issues to consider. Whether cooking a whole chicken or pieces, frozen chicken takes at least 50 percent longer to cook than thawed. Cooking chicken from frozen only works when using your stovetop or oven ⁠— do not try cooking frozen chicken in your slow cooker. In a slow cooker, the cold meat may spend too much time in a temperature range where bacteria are most likely to grow. 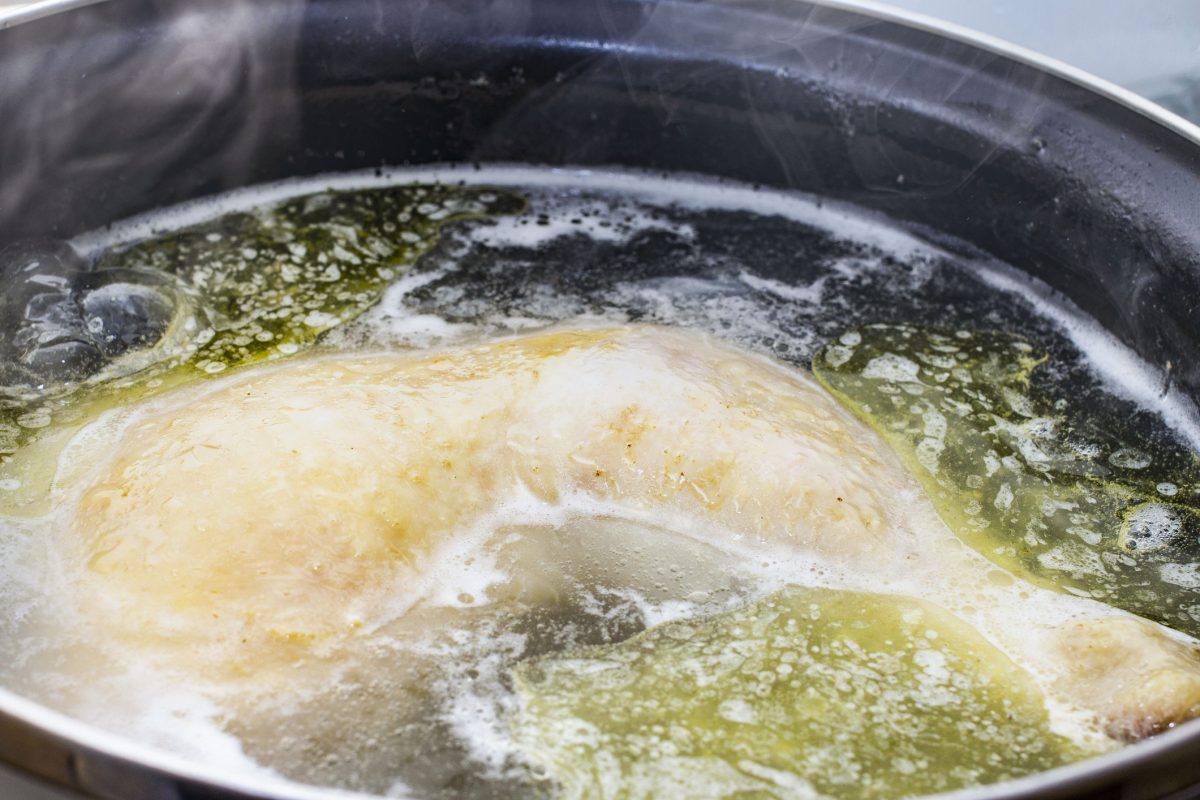 How long does it take to defrost chicken?

The length of time it takes to defrost a chicken depends on whether it’s whole or cut into pieces. A good rule of thumb when thawing a whole chicken is to allow for 5 hours per pound to defrost, which means that a 5-pound chicken takes between 1 and 2 days. A pound of boneless chicken breasts or other chicken pieces will need about 24 hours to fully thaw. 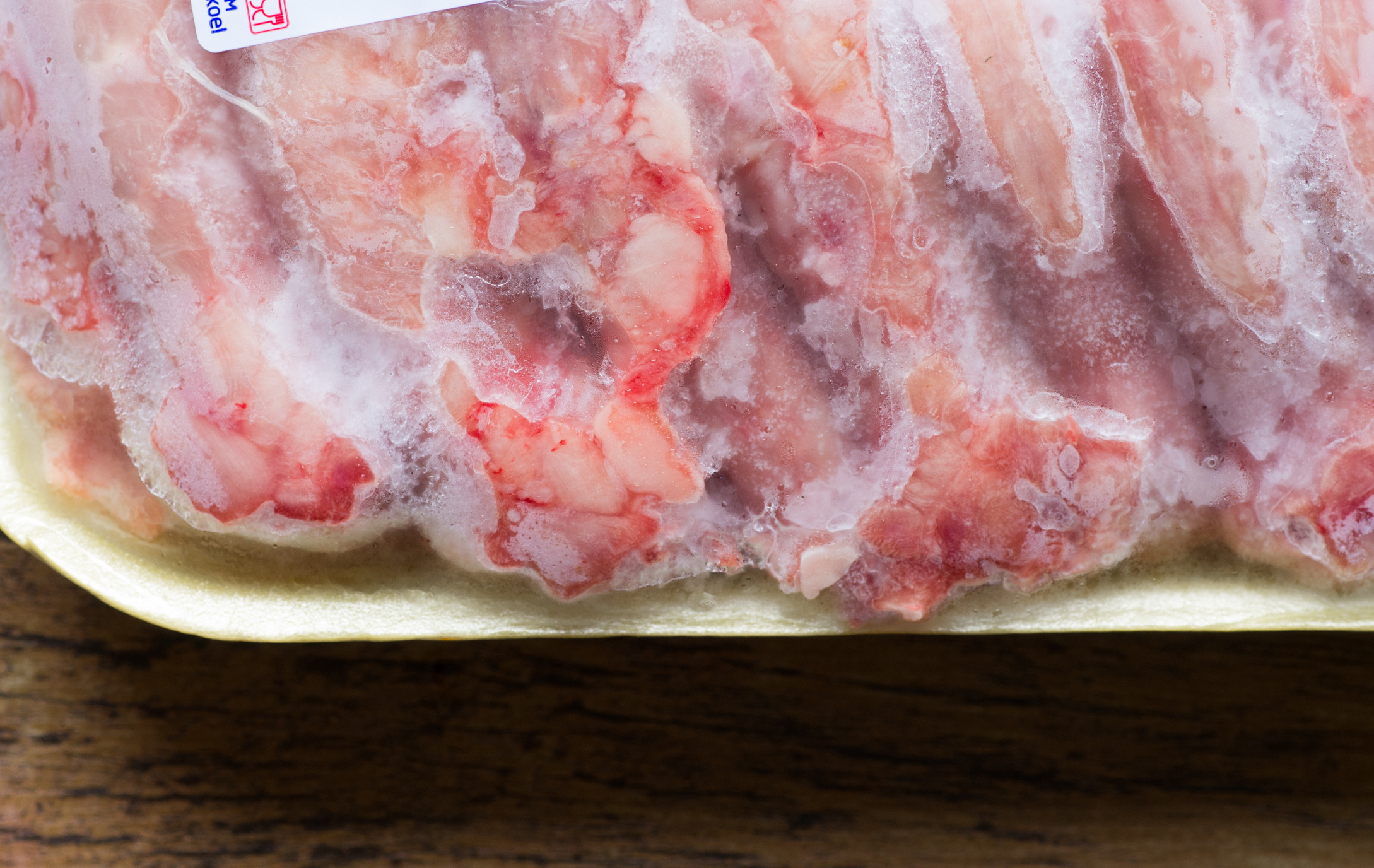 How NOT to thaw chicken

It may be tempting to thaw chicken quickly by running it under the tap for a bit and letting that water sluice down the drain. However, washing raw chicken spreads the Campylobacter bacteria, which is responsible for numerous cases of food poisoning. This germ is transmitted through droplets, and a little splash can contaminate hands, surfaces, clothing, and equipment. It’s also not a good idea to just let the chicken defrost on the counter at room temperature overnight as ambient warmth and humidity promote bacteria growth. 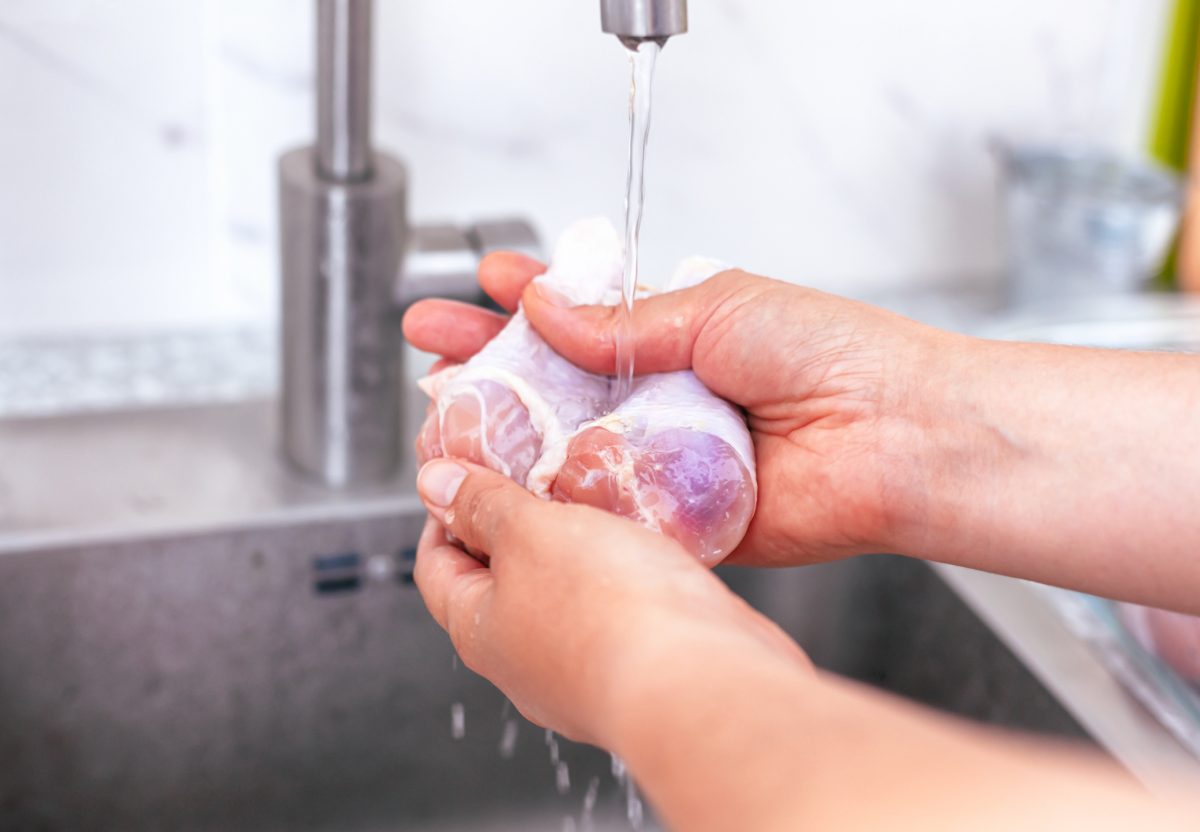 Raw chicken can be left out on a counter for no more than two hours. The key here is the surface of the chicken, which will rise to that 40-degree-Fahrenheit mark, giving bacteria the chance to multiply. That two-hour maximum is the estimated time it takes frozen chicken exterior to reach that temperature. It’s okay to leave it out for about 30 minutes or so as you season and prepare it, but once it hits that maximum time, it becomes unsafe.

Depending on whether it’s whole or in pieces, frozen chicken can last between 9 months and a year in the freezer. But to ensure it tastes good when you’re ready to cook it months down the line, it has to be packed to avoid freezer burn. This happens when the outer layers of the meat become dry, because the moisture evaporates, turning chicken slightly brown. To reduce this irreversible process, wrap the chicken in double layers of wax paper, plastic, or foil before putting it in a freezer bag. 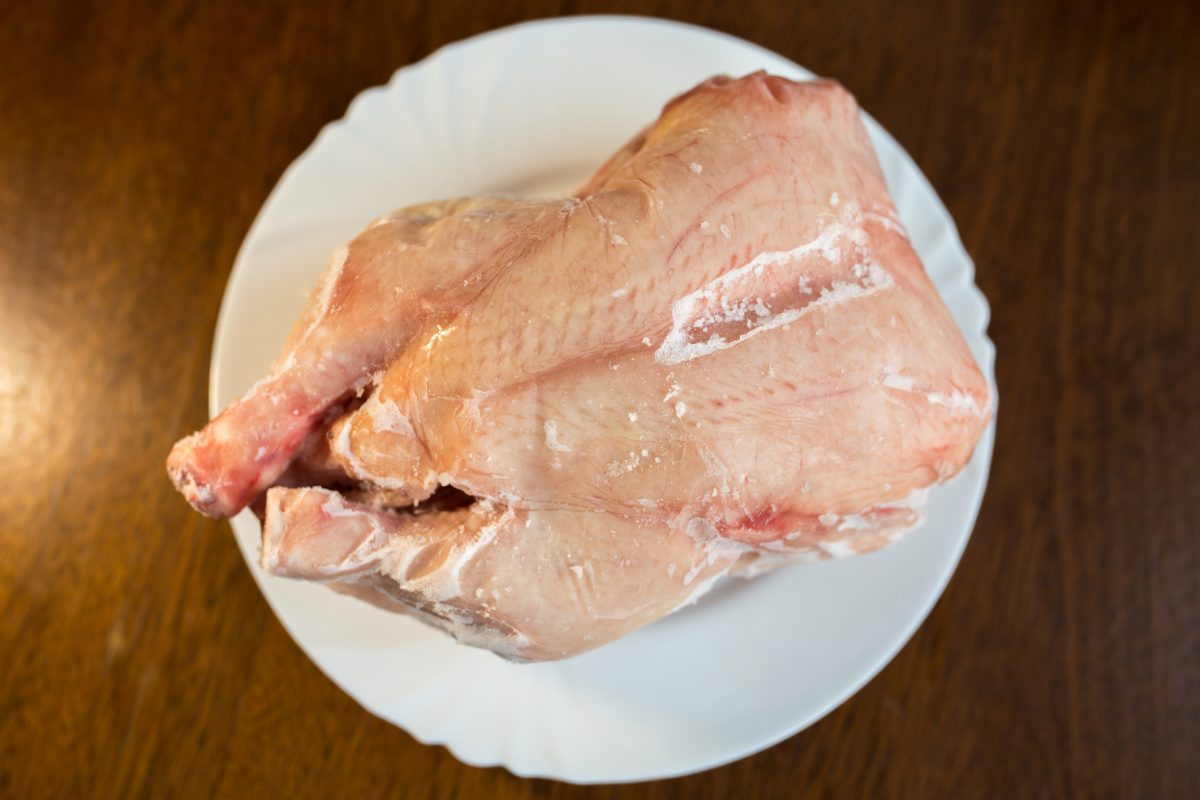 For thoroughly cooked chicken, the magic number is 165 degrees Fahrenheit at the meatiest part. This temperature ensures bacteria is destroyed. Alternatively, you can cook the chicken until it reaches 145 degrees. Maintain that for about 9 minutes, to achieve the same effect of killing bacteria. For those who want to marinate chicken, it’s a good idea to bring that liquid to a boil for about 10 minutes before brushing it on cooked chicken. Otherwise, any unused cooked or uncooked marinade must be thrown out. 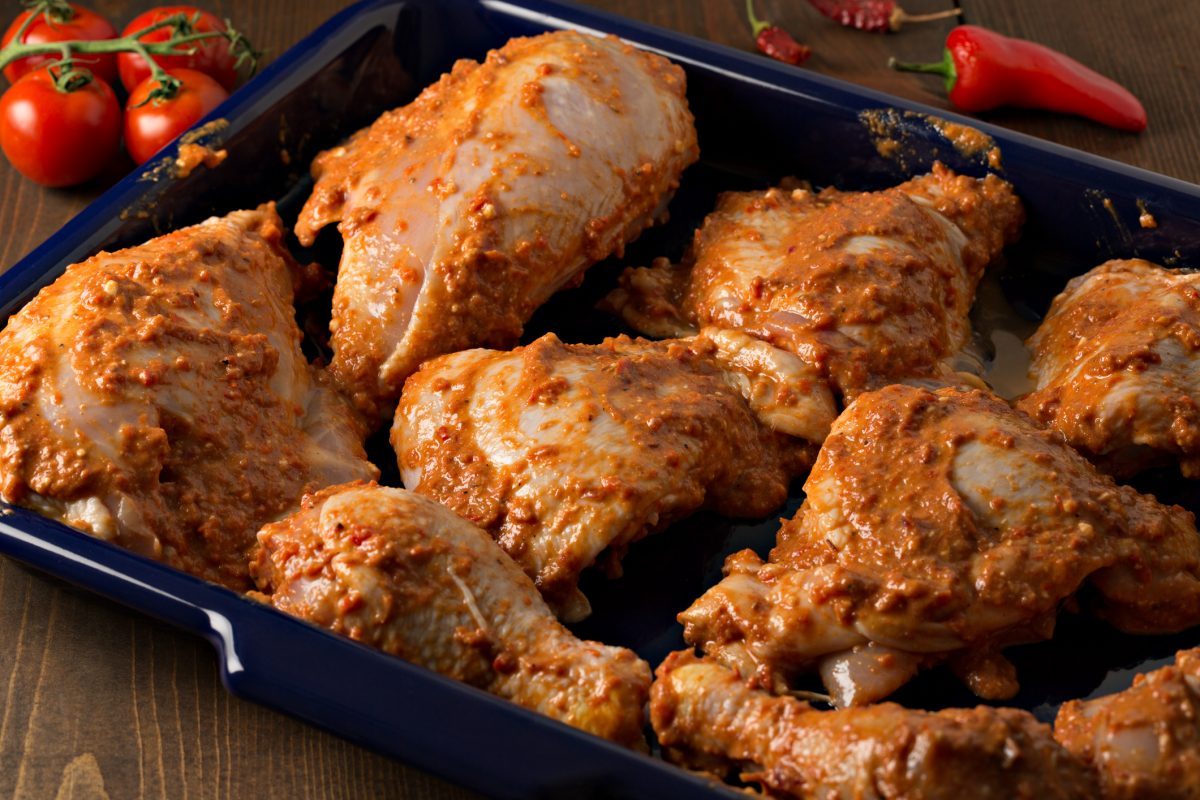