How to Make Pork Chops

Pork chops are delicious alone, but when combined with sauces, herbs, vegetables or spices, they come alive with even more flavor. Some of the most delicious pork chop recipes also don’t require the fat, making a leaner choice for healthier eating. More than that, they’re also a fabulous source of protein and a good chicken substitute for when you’re just a little tired of eating it. Of course, there’s also the option of having bone-in pork chops, which keep the meat even juicier. And the best part? They aren’t difficult to make at all.

It doesn't get any better than sautéed pork chops with a side-serving of Popeye's favorite food, spinach. Particularly considering this recipe is both inexpensive and quick and easy to whip up. Sometimes, a simple recipe is the best recipe, and this one hits the mark. Another great suggestion for this recipe is to finely chop a little garlic to add to the spinach as a garnish. The pork then absorbs the extra taste. Delectable! 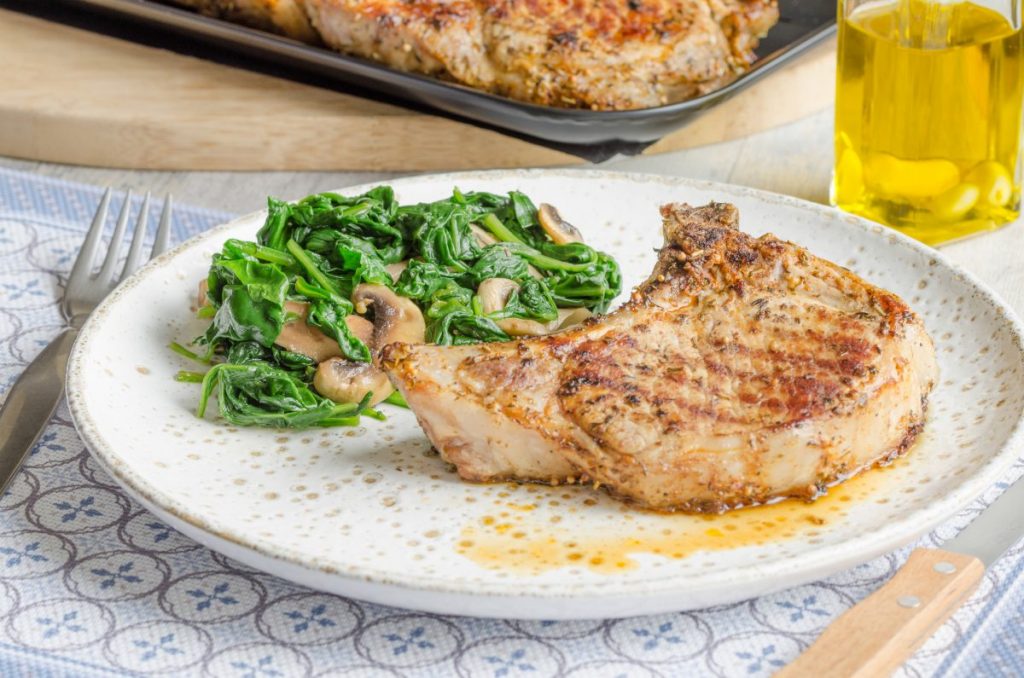 Have you ever seen those old cartoons that will have a roasted pig on the table with an apple in its mouth? Well, that's because apples go with pork as brilliantly as salt does pepper. Pork chops and apples together have a flavor profile that compliments them both. Very rarely can you go wrong with this mix. You can also cook the pork chops in apple cider to make the fruity, juicy taste even stronger. 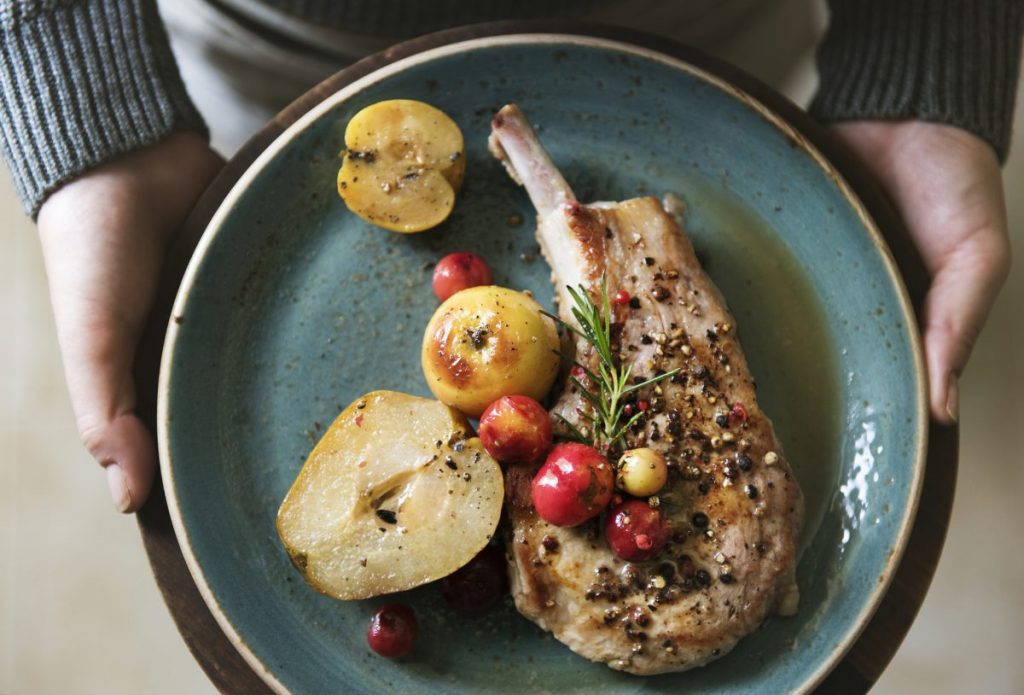 Why does every fried Japanese dish taste even better? This deep fried pork chop recipe is no different. The breadcrumb batter makes the outside crispy while the inside remains juicy. Explains why it's one of the most popular dishes, in Japan. For this recipe, you also probably want to take the fat off of the pork chop before breading. The best thing to compliment this is Japanese mayonnaise. Seriously, try it. 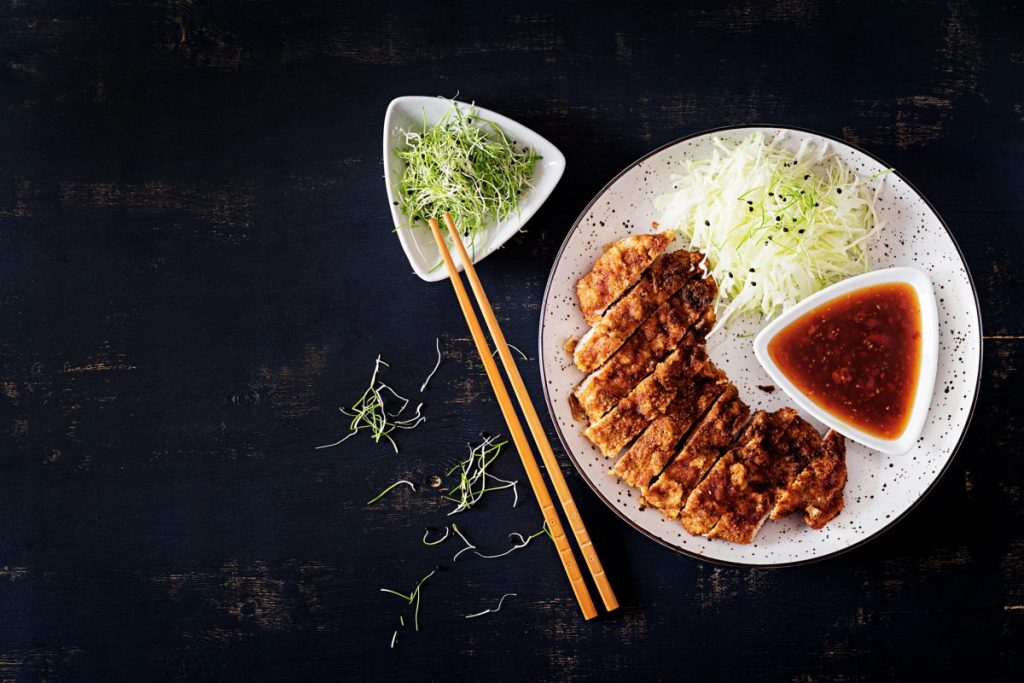 Second to apple, peppercorns are another ingredient that goes excellently with pork chops. Making a delicious pan sauce using butter and as much pepper as you like - within reason - you'll have a great, long-lasting accompaniment to your pork chops. Once the sauce has sautéed in the pan, simply blend it all together and add some white wine to the mix. While you do this, you can be cooking the pork chops on a griddle pan. Delicious food in less than 20 minutes. 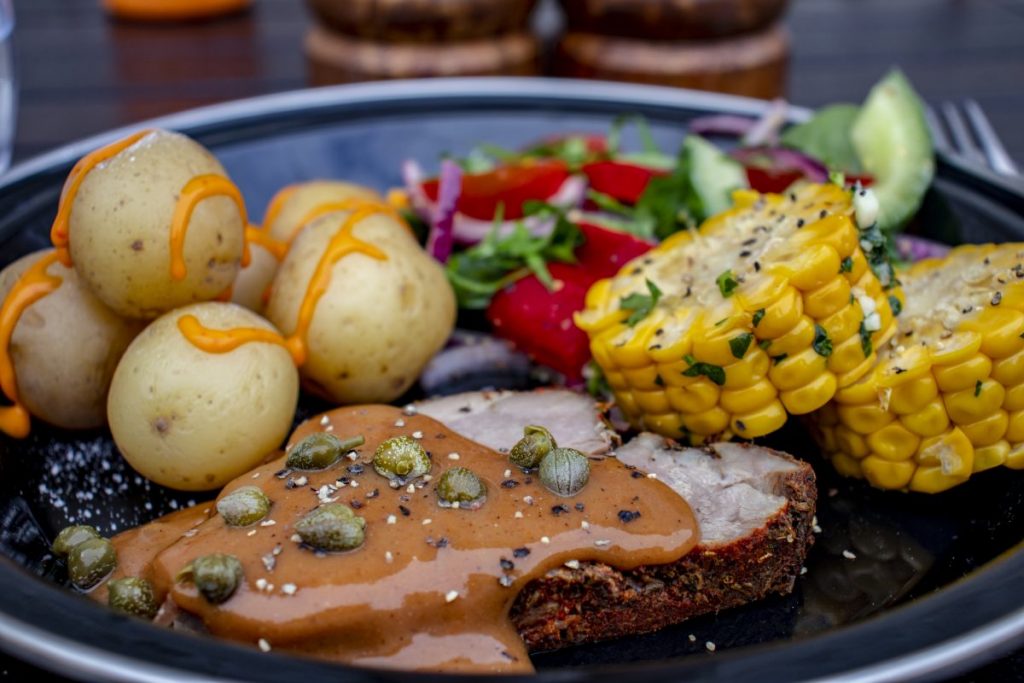 Once glance at this recipe and you'd never guess it takes only half-an-hour to go from pan-to-plate. Fortunately, it does, and it makes for a succulent dinner or supper if you'd rather spend your time doing something other than cooking. For this, you can use either bone-in or boneless chops, but if you make a sauce to go with it, the boneless won't be as dry. For an easy sauce, you can throw in some shallots, pomegranate juice, and some thyme. Then simply marinate your chops and toss on some pomegranate seeds. 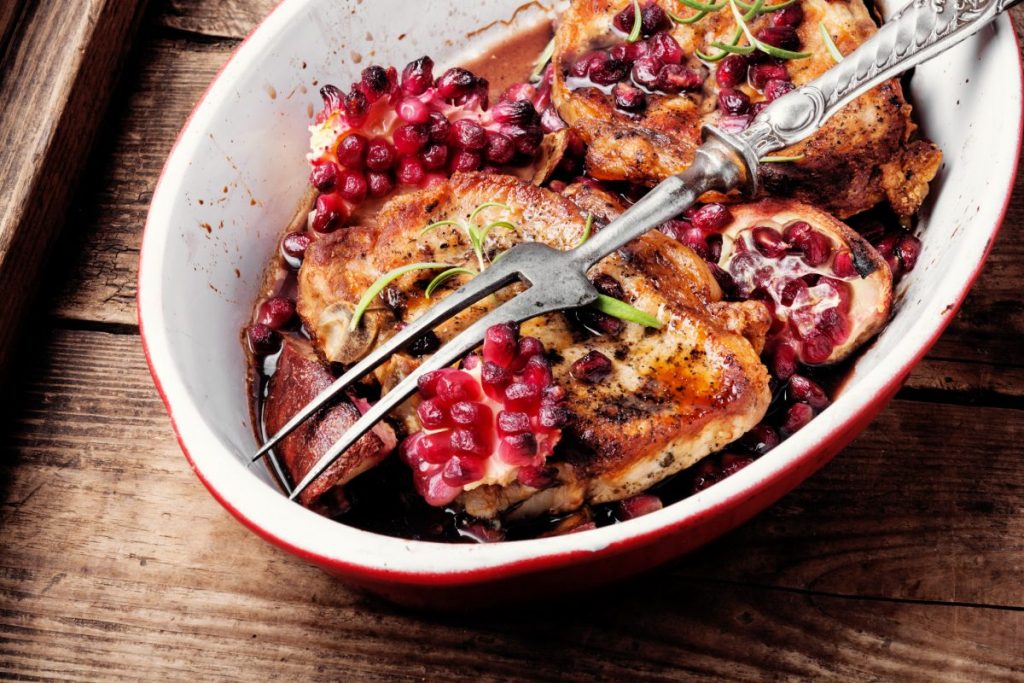 Caponata is an eggplant-based dish from Sicily that tastes incredible with pork chops. Although the dish in itself is vegetarian, the bonus - for us meat eaters - in adding it to pork chops is that it's full of the Sicilian herbs and spices we love. The pork chops pick up the caponata's sweet and sour zing, leaving nothing to the imagination. Furthermore, you can whip up the entire meal in less than 30 minutes. It makes for a great, hearty post-work meal. 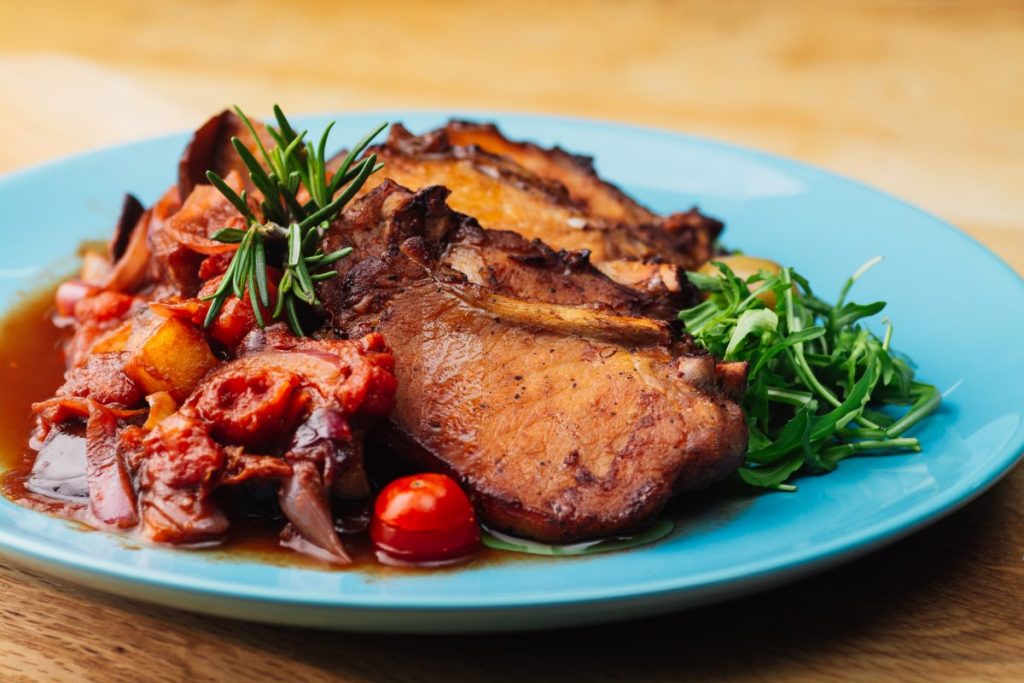 Spice up your pork chops with all of the flavors you can handle. Like with straight up peppercorns, pork with a spicy kick to it only serves to make the meat even yummier. If you're feeling creative, you can create your own marinade using anything from your spice rack you wish. Try mixing some parsley with thyme, sage, garlic, onion, and cinnamon and use it to dowse your meat before putting it on the grill. You can even save your rub for later - try it on chicken, too! 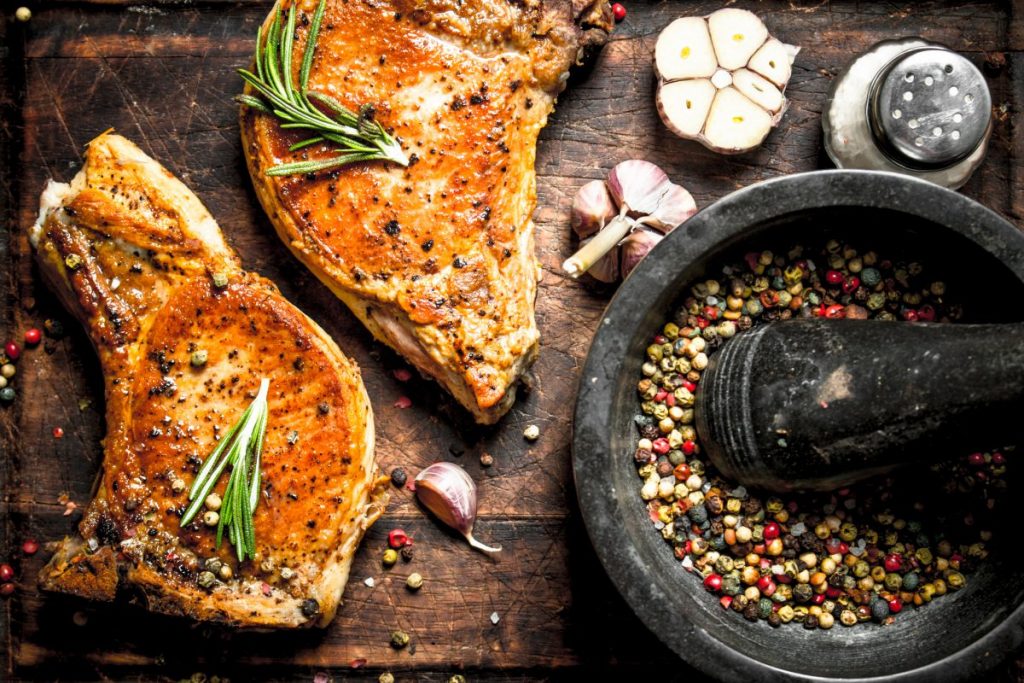 Italians love their tomatoes, and once you've tried this recipe, you'll love them even more, too. Throw some heirloom and cherry tomatoes into the skillet with your pork chops. This is so easy to make for the entire family. One that ensures everyone will be fed for days if you make a big enough batch. You can also add other vegetables like peppers or even some cheese if you like. There are no limits with this dish. 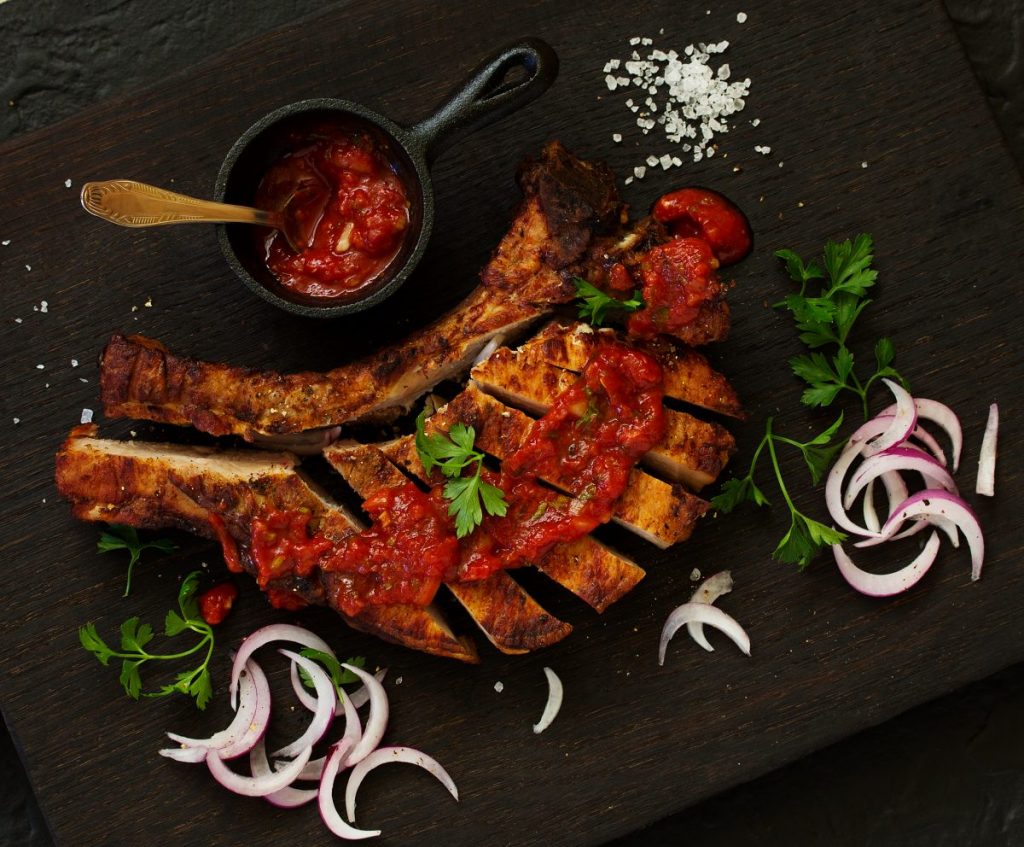 If you asked us, we would say that chutney is a condiment that was forged by the Gods. No matter what you use for it for, it tastes delicious on anything - including pork chops. Some of the recommended chutneys for pork chops are apple, pear, and ginger. However, to give it an authentic Indian kick, you can try it with homemade mango chutney. 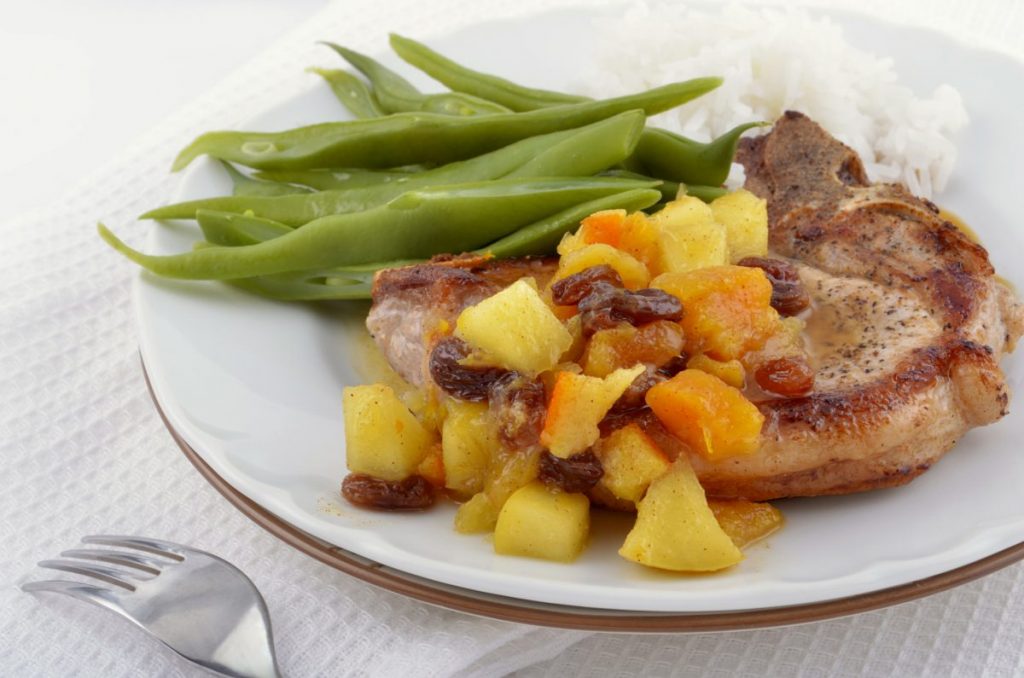 Grilled Pork Chops on a Bed of Garlic Potatoes

Whether you want to mash or slice your potatoes, this pork chop recipe works for both. It also works with regular potatoes or sweet potatoes. All you need for this recipe is a single pan, a few ingredients, and the time to sit down afterward. It's just that good. Marinate your pork chops in a soy sauce and garlic marinade and then put them in to bake alongside crispy roast potatoes. You can then top it off with a little bit of lemon for that extra kick. 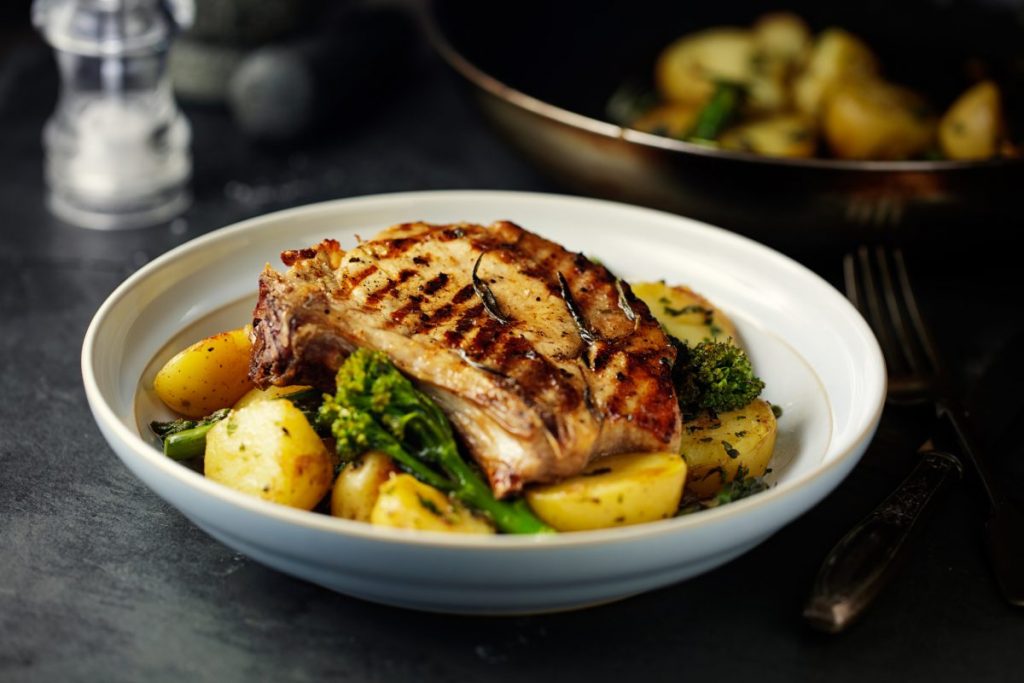