How to Make Pizza Dough

This easy recipe is perfect for people who have never worked with yeast, as well as veteran bakers. With just a few simple ingredients and your favorite toppings, you can enjoy a fresh hot pizza straight from the oven.

This single recipe works for thick, thin, pan, or hand-tossed crust. The edges can even be stuffed with cheese if preferred. If you are just getting started learning to work with dough, try the thick and thin variations first. Tossing pizza dough is a difficult trick to master. Rolling the dough slightly larger than the pan and rolling it over cheese is the easiest way to make a stuffed crust. 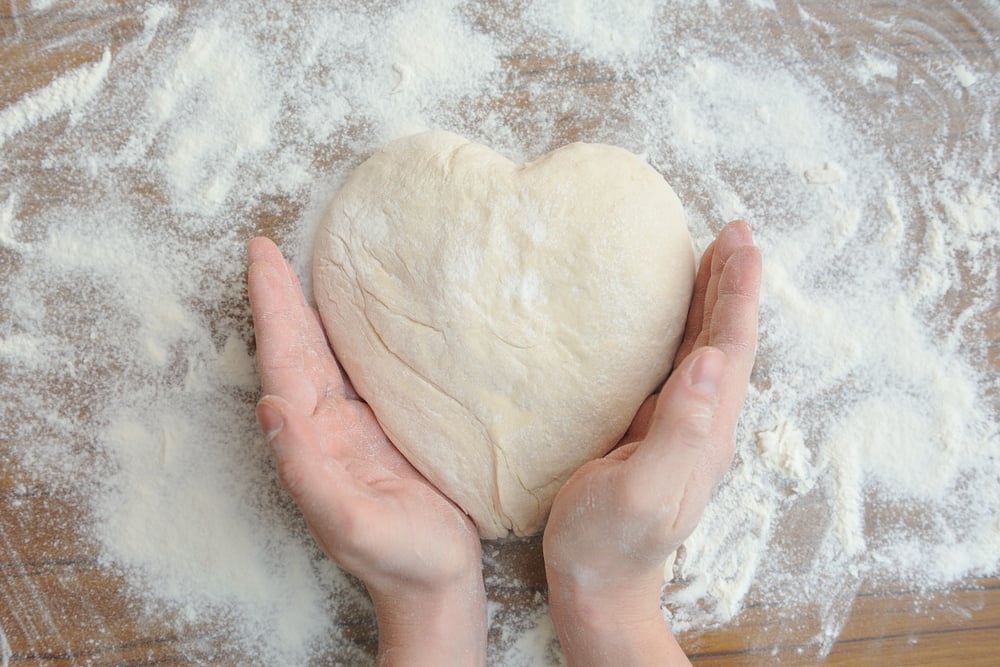 Pizza dough can be flavored during the mixing stage. This is a basic recipe that can be modified by replacing the butter or oil with equal amounts of olive oil as well as adding different herbs. Popular choices are garlic butter brushed on the edges of the crust before or after baking, basil, oregano, or even small bits of onion in the crust before baking. Only add a teaspoon of herbs at first, then according to taste for the next batch. A dash goes a long way, and you don't want to risk ruining the flavor. 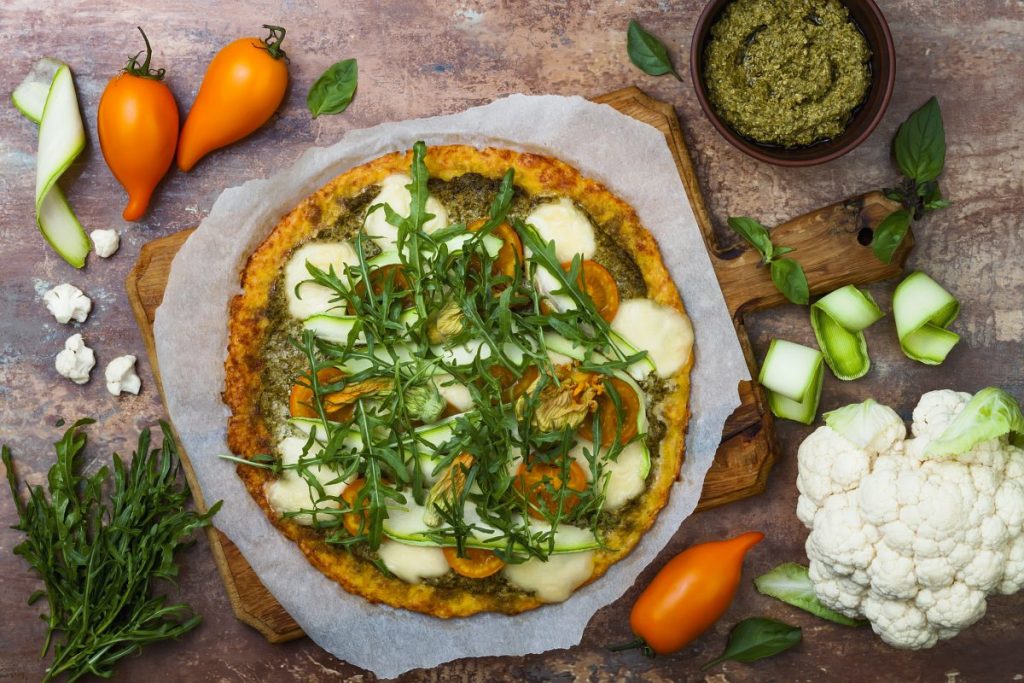 The following recipe will create one large thick crust pizza plus breadsticks, or two medium pizzas. Exact sizes and quantities will vary based on how large and thick you roll the dough.

You will need the following: 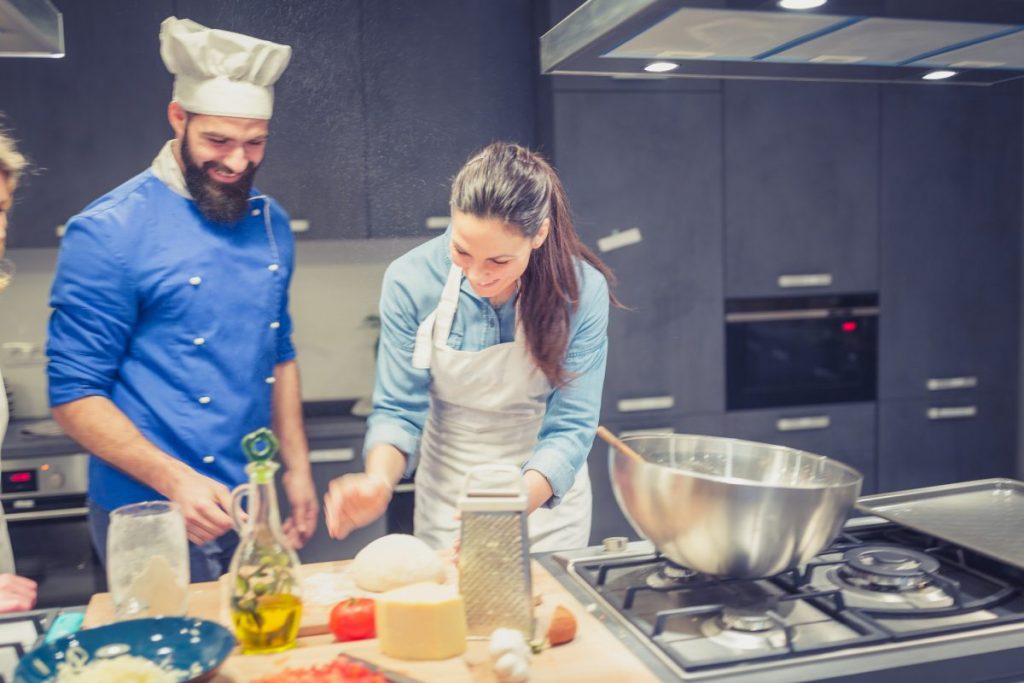 Proof the yeast by dissolving the yeast and one tsp sugar in 1/2 cup of the warm water. Set aside. Place 3 cups of flour and the remaining dry ingredients in a large bowl, or mixing bowl if using a mixer. Add the yeast mixture and remaining water and butter or oil. Mix thoroughly. Stir in one cup of flour, mix, and add the rest of the flour one-half of a cup at a time. You may need slightly more or less flour. 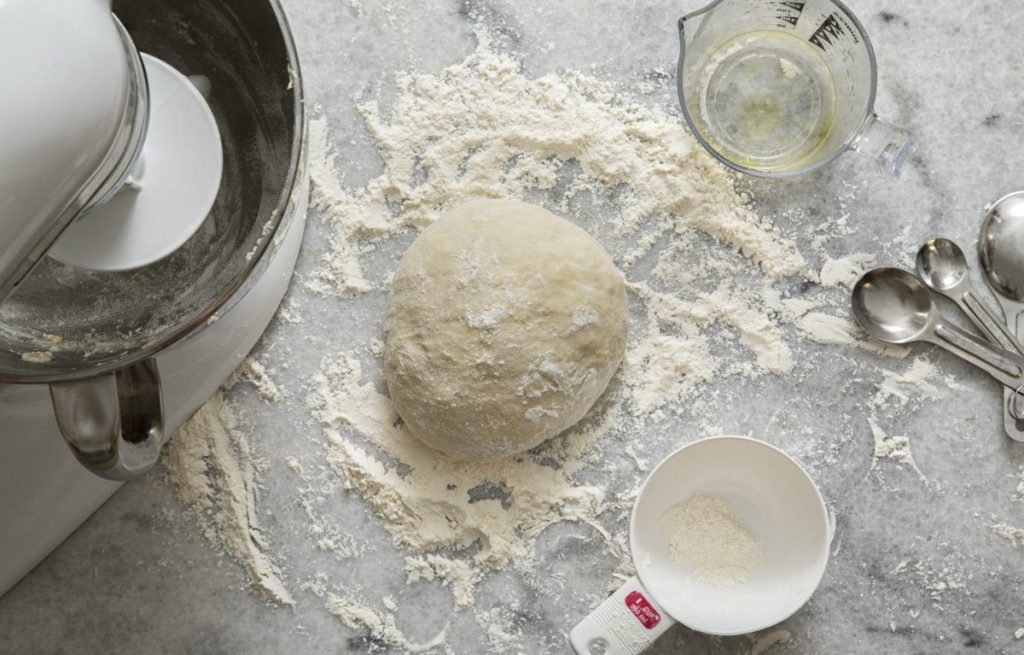 Turn the pizza dough out onto a floured surface and knead it until it forms a smooth, elastic ball. This will take 5-10 minutes. Knead using the palm of your hand, pressing the dough down and away, fold over and repeat until it reaches the right consistency. You may need to add slightly more flour during this process. If using an electric mixer for making the dough, be careful to not overmix the dough. Stop as soon as it begins to form a ball on the dough hooks. 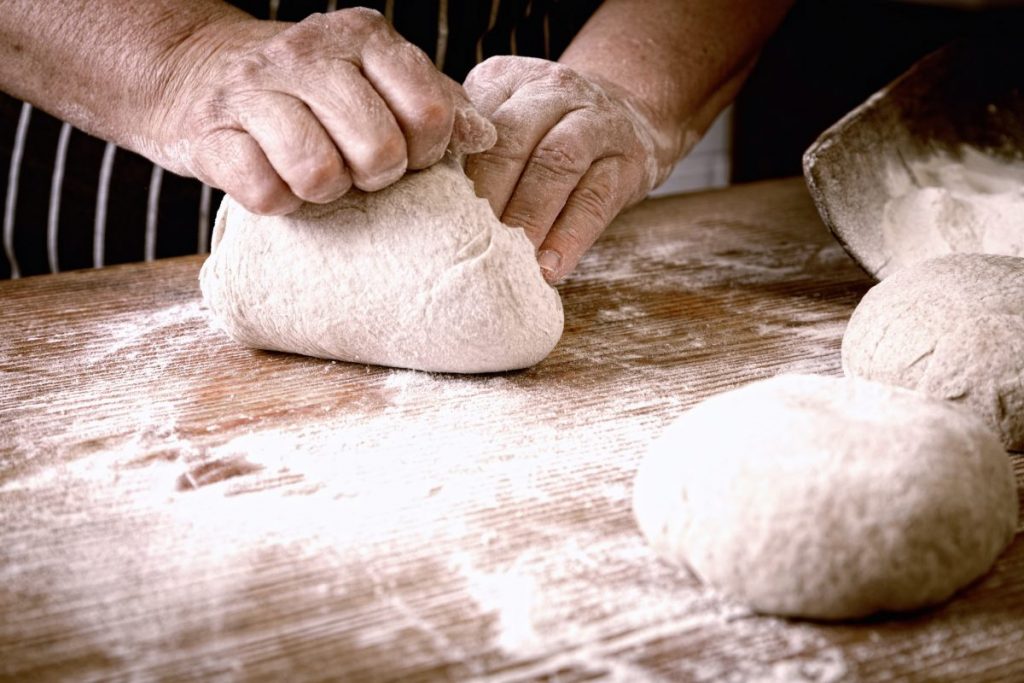 Leave the dough ball on the floured surface, or place it into a bowl and cover with a towel. Let the pizza dough rest for 20 minutes. It will rise slightly during this time, but won't need to double as when making traditional bread dough. After the bread has risen, punch the dough down and it is ready to be rolled and shaped. 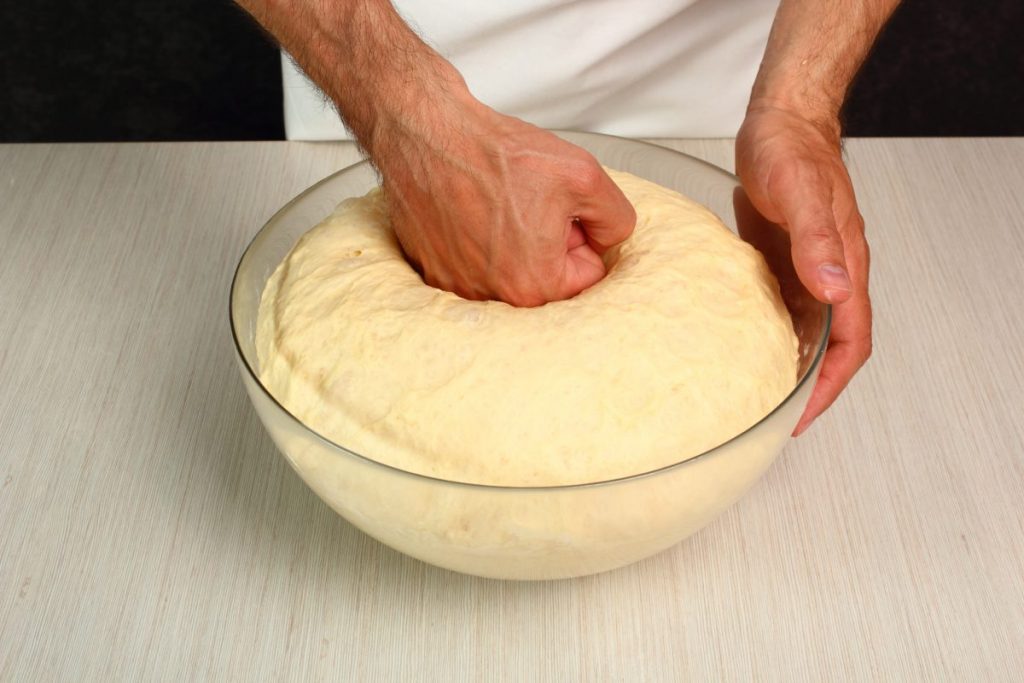 Preheat the oven to 425 degrees so it will be hot when the pizza is prepared. You can use a stone, pizza pan, cookie sheet or even a cast-iron skillet for baking the pizza. Roll the dough out to the desired thickness. Lightly grease the pizza pan before placing the dough on it. Piercing the pizza crust with a fork will help prevent a doughy crust, as will using a pizza stone or pizza pan with holes. Be sure the dough isn't too thick or it will be doughy when the top is done. Even thin dough will rise during the baking process. 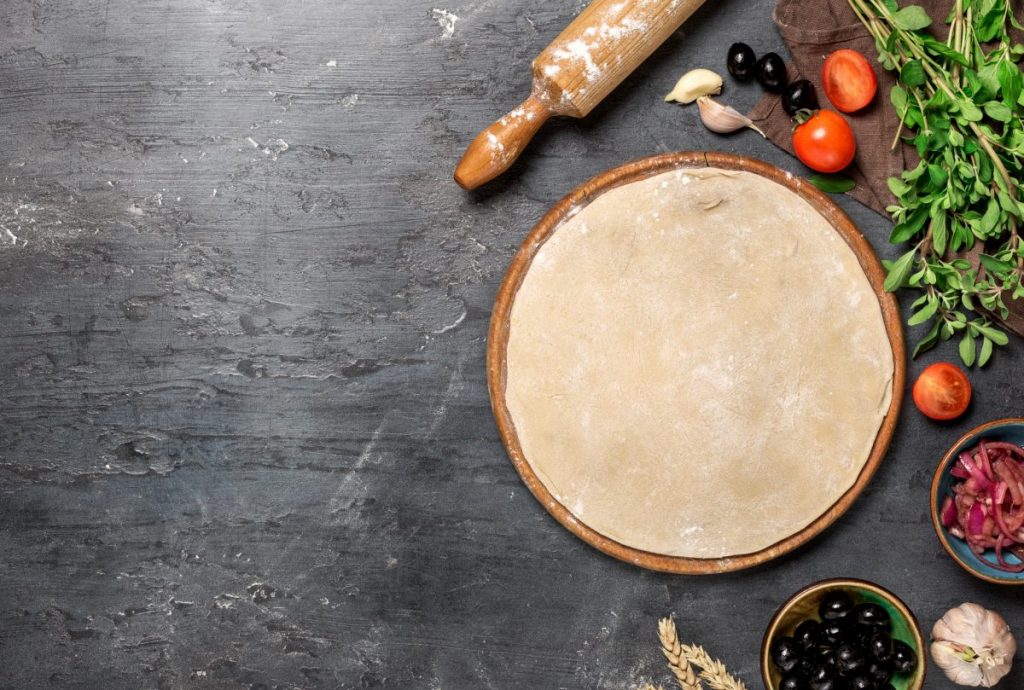 Spread a thin layer of pizza sauce on the dough, leaving an edge of crust around the outside of the pizza. Next, add your favorite toppings and cheese. The crust can be brushed with garlic butter or left plain. If there is leftover dough it can be made into a smaller pizza or rolled out and cut into breadsticks, sprinkled with herbs, cheese, and butter and baked at the same time the pizza is. 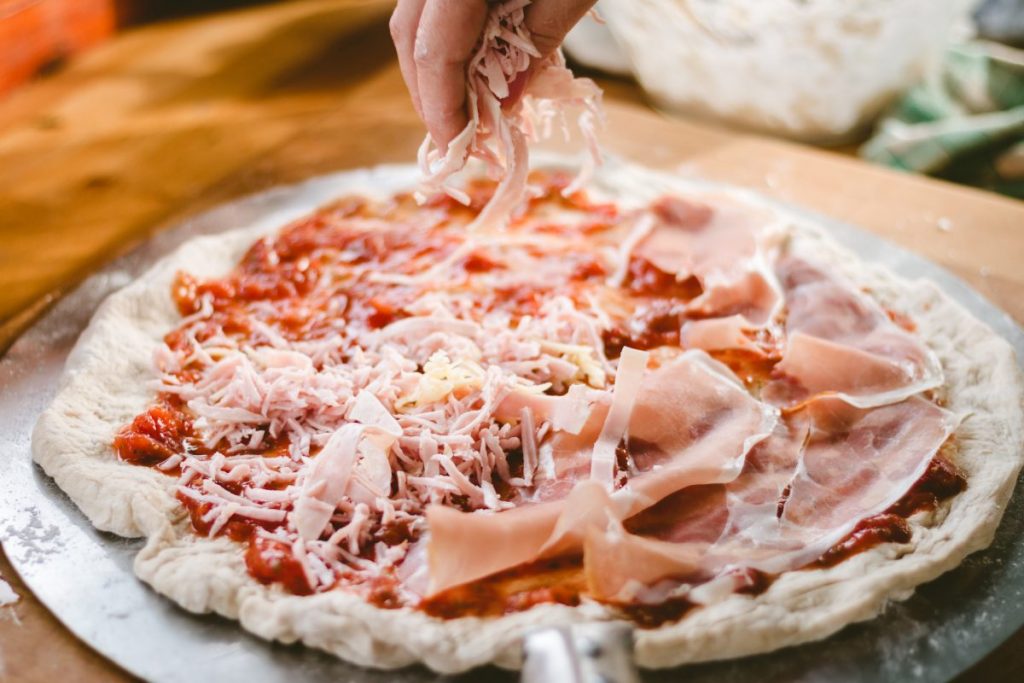 Place the pizza into the preheated oven and bake on the top rack until the dough is cooked and cheese is melted approximately 20 minutes. Remove the pizza from the oven and slice it into wedges for traditional round pizzas, or rectangles if using a cookie sheet, using a knife or pizza cutter. 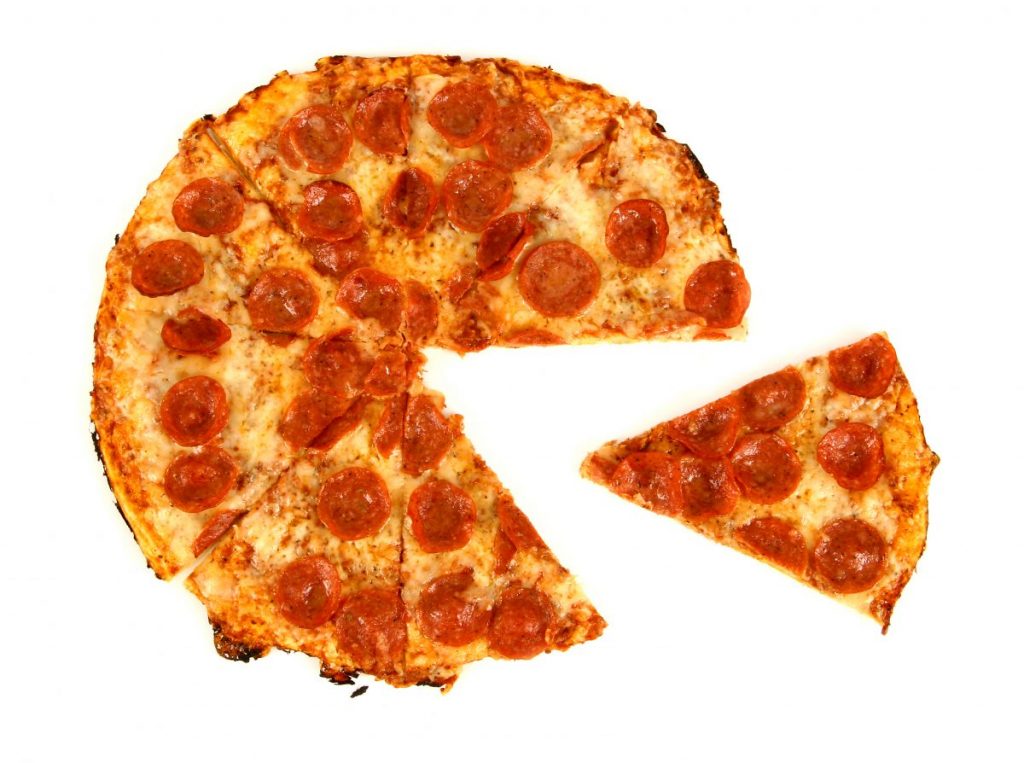 Tips for Working with Pizza Dough

Pizza dough should not be too stiff, but rather soft and pliant. Reserve 1/4 cup of flour to work into the dough while kneading, adding extra just a little at a time. Allow the yeast to proof before adding it to the mixture. This means that it is active. You will notice bubbles and froth after a few minutes of adding it to the water. Using water that is too hot will kill the yeast. It can be checked using the wrist, in a similar fashion to checking a baby bottle. Either gently fold pizza dough into quarters or wrap it around the rolling pin to transfer it from the countertop to the pan for baking. 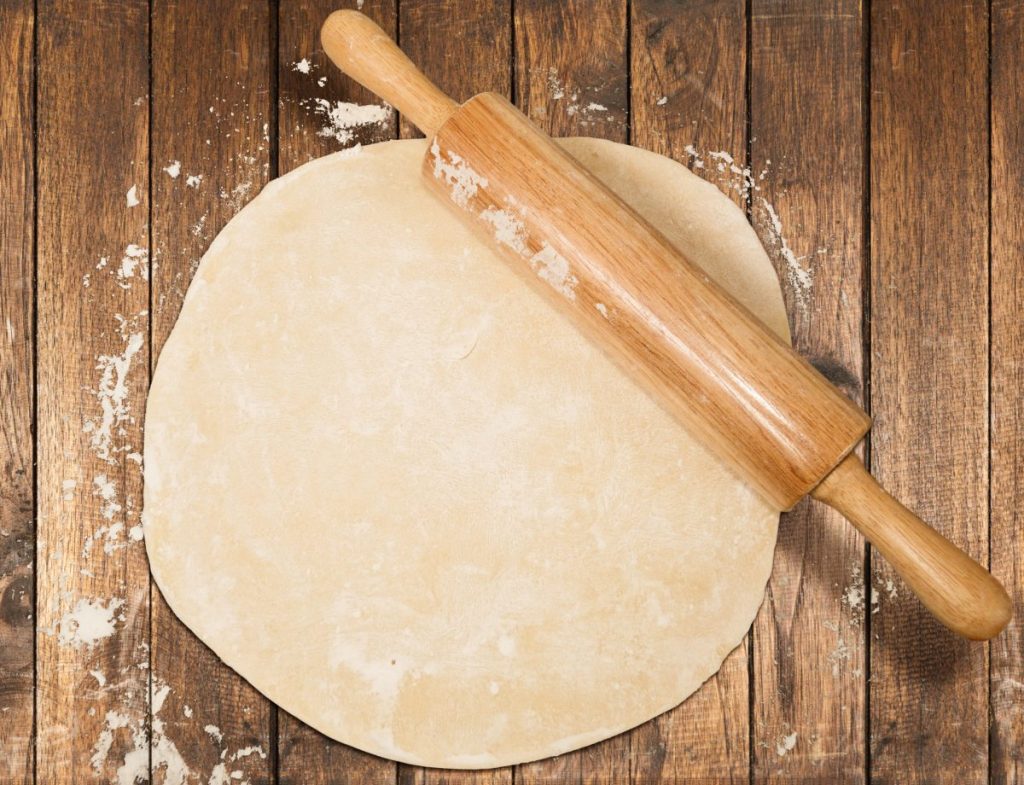