How to Make Jell-O Shots

Jell-O shots are colorful confections that pack a punch and are a fun addition to any party.

A general recipe for how to make Jell-O shots is 1 cup of boiling water, 3 ounces of Jell-O powder and 2/3 thirds cup of liquor. Combine the water and Jell-O and mix until the Jell-O dissolves. Mix in your alcohol and then pour the mixture into two-ounce cups. Refrigerate until it's set and serve at your party.

Colors and flavors can be mixed and matched for endless variety. Mimic some of your favorite traditional cocktails and desserts or create something completely new.

One of the most fun cocktails to drink also translates well to Jell-O. Combine lime Jell-O with tequila and a little triple sec. Before serving your margarita Jell-O shots, rim the edges of the cups with salt or sugar, or a mixture of both, and garnish with a slice of lime. 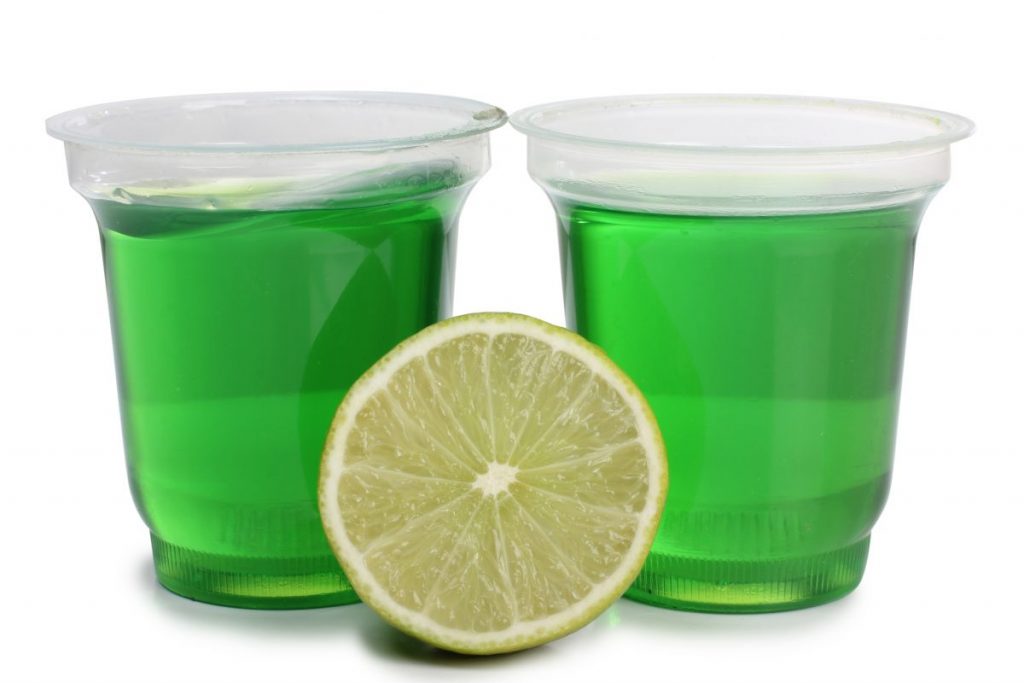 Experiment with replacing some of the boiling water with boiling juice to replicate some favorite cocktail flavors. For a Cape Cod, use half water and half cranberry juice. If you can't find cranberry Jell-O, choose strawberry or mixed-berry for a stunning deep red color. Add vodka and for a fun party look, garnish each shot with a twist of lime peel. 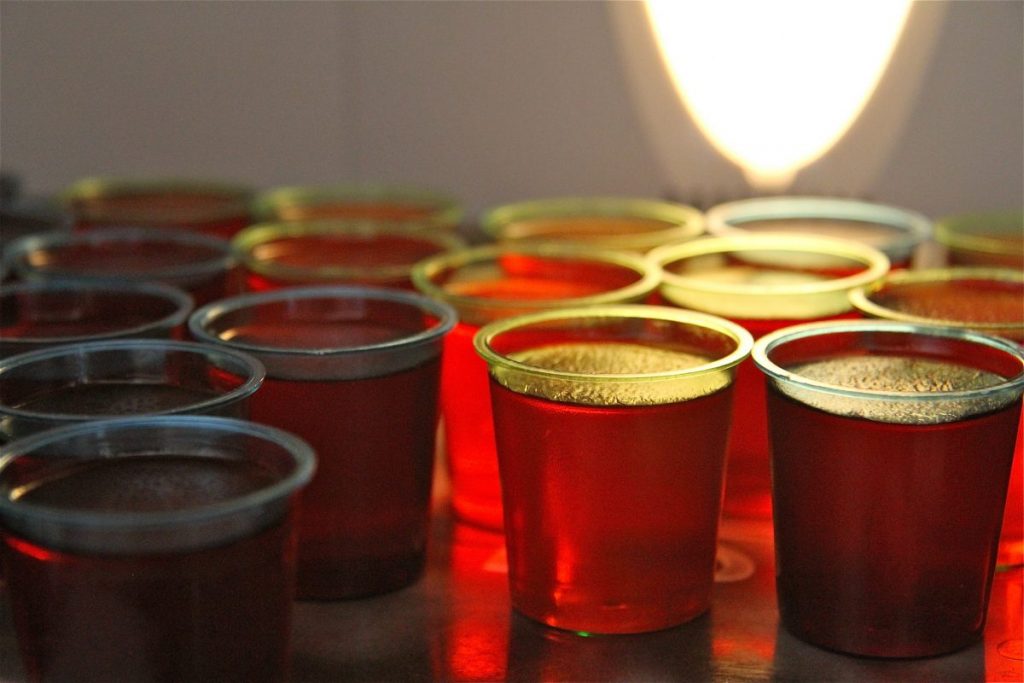 Jell-O comes in more flavors now than it did when you were a kid, so take advantage of that and use them to make some delicious treats. For a piña colada, use pineapple Jell-O, Malibu rum and triple sec. Before it's fully set sprinkle some shaved coconut on the top for more flavor and texture. 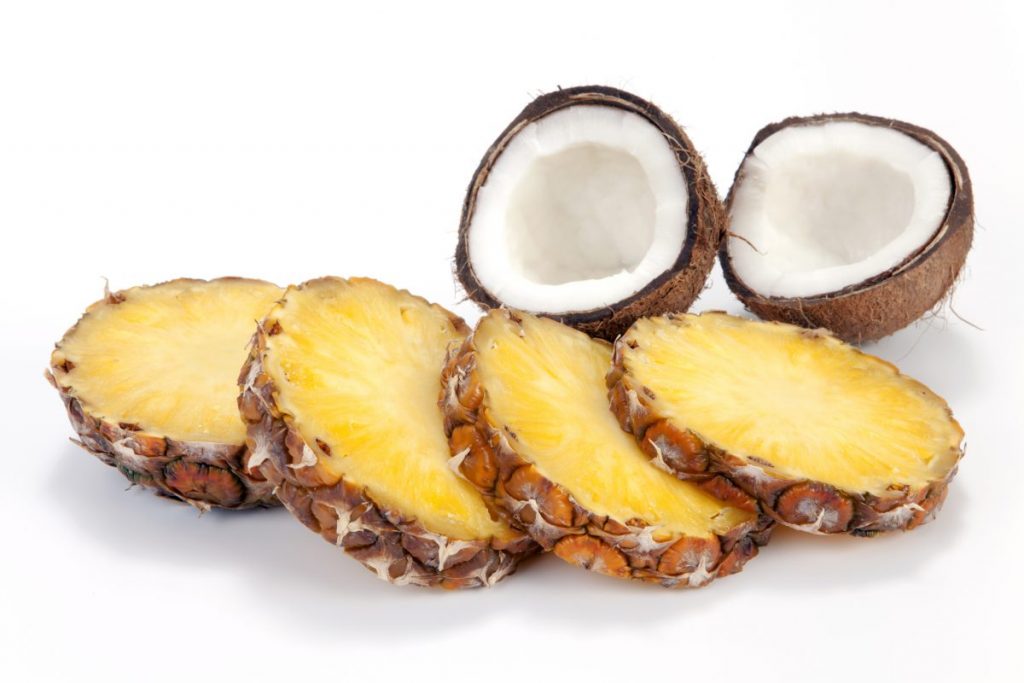 Flavored vodkas give you endless possibilities for combining with different Jell-O flavors. For a strawberry lemonade shot, try strawberry Jell-O with lemon vodka or lemon Jell-O with strawberry vodka.

There are dozens of flavors of vodka, so let your creativity shine while making appealing treats for your friends. Garnish your Jell-O shots with a complementary bit of fruit or sprig of mint. 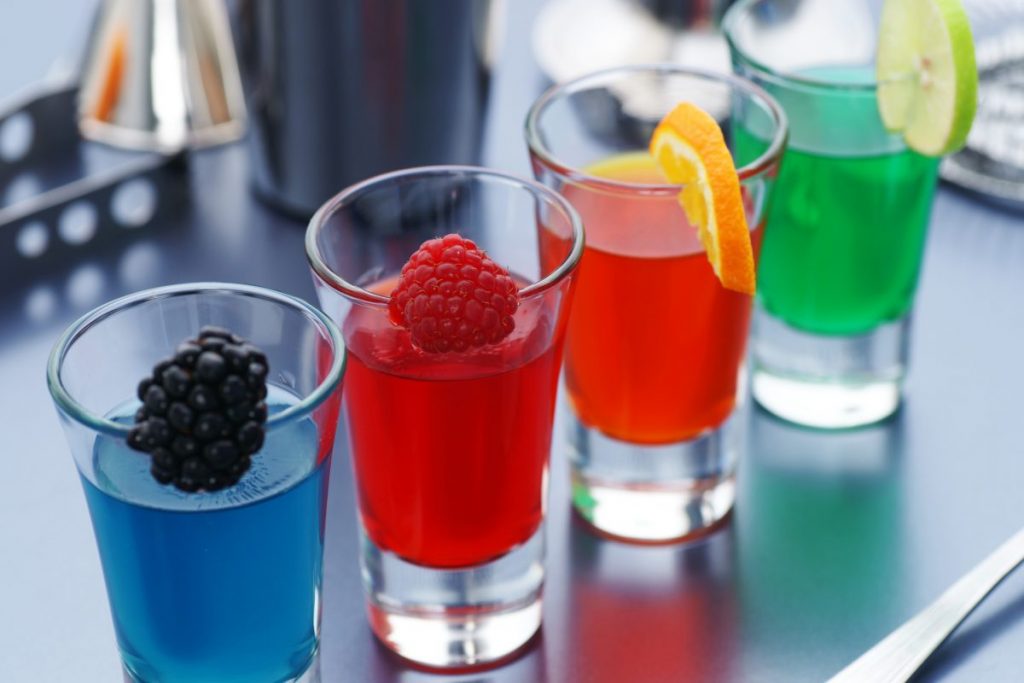 This sweet-and-sour cocktail is divine in Jell-O form, too. Use lemon Jello-O, lemon vodka, and triple sec. Before serving these lemon drop Jell-O shots, rim the glasses with sugar. For a little extra bite, use a vodka or other lemon-flavored liquor that has some pucker. If you like it sweet, garnish each shot with candied lemon peel. 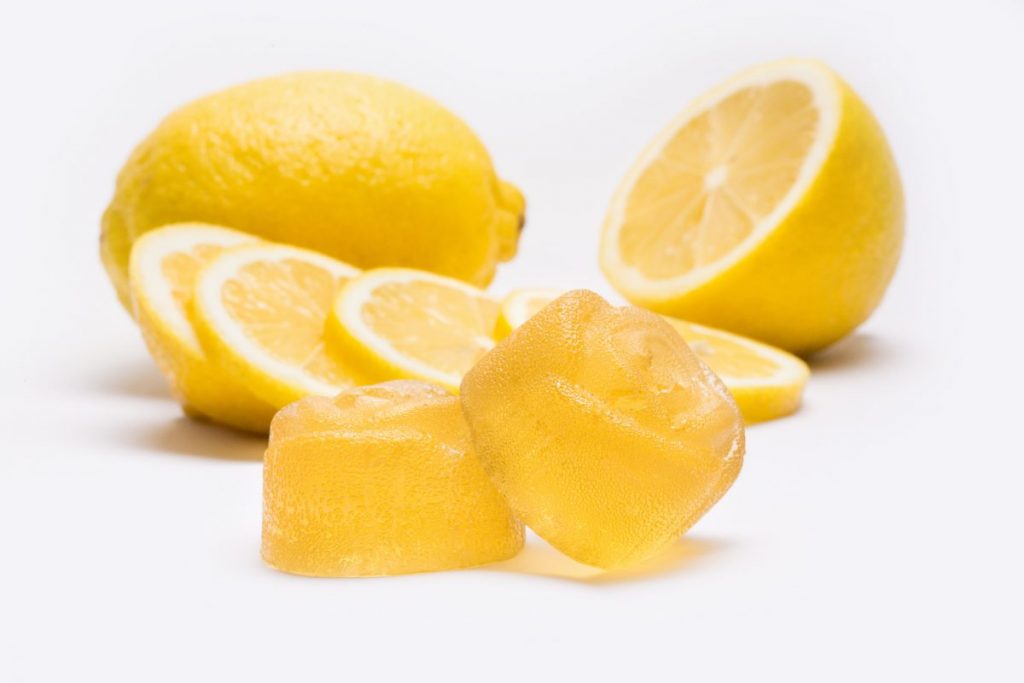 When the hot water has started to cool, but before the Jell-O has set too much, add a gummy bear to each shot. Look for eye-pleasing contrasting colors with complementary flavors, like a strawberry gummy bear in a shot of orange Jell-O with Malibu rum.

Some Jell-O cocktails pair well with Sour Patch Kids, too, like a yellow one in a lemon drop or a green one in a margarita, 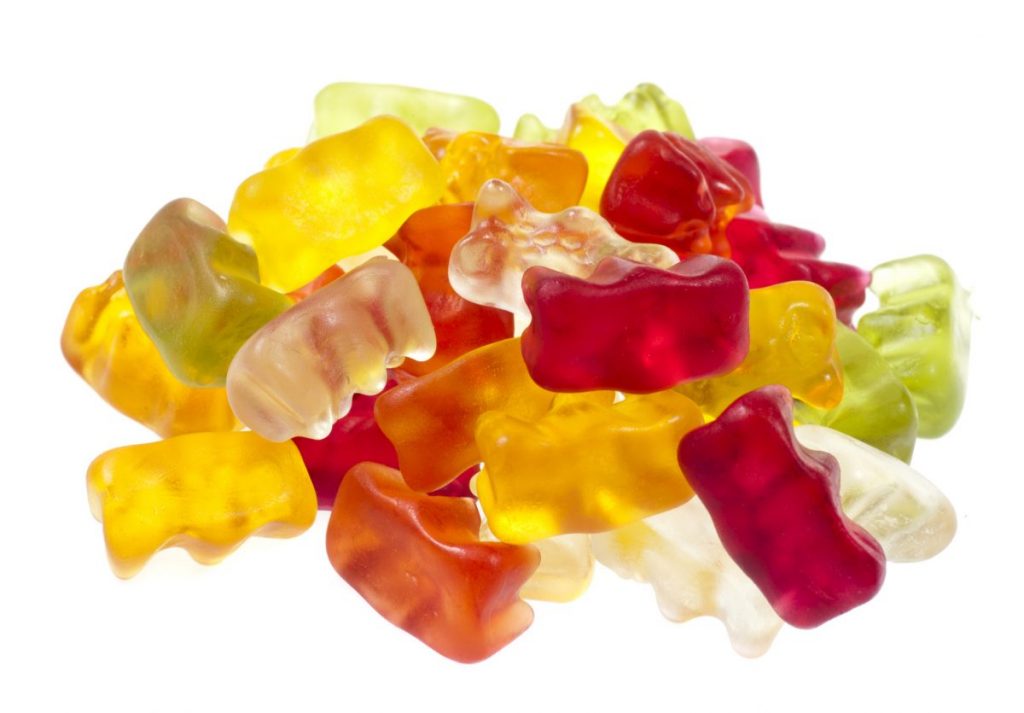 There's just something about the color blue that makes Jell-O and cocktails appealing. Combine berry blue Jell-O with plain vodka or one of the many berry-flavored vodkas. Berry blue pairs well with tropical flavors, too, such as rum and blue curaçao. Garnish with a dab of whipped cream and a strawberry for a red, white and blue treat. 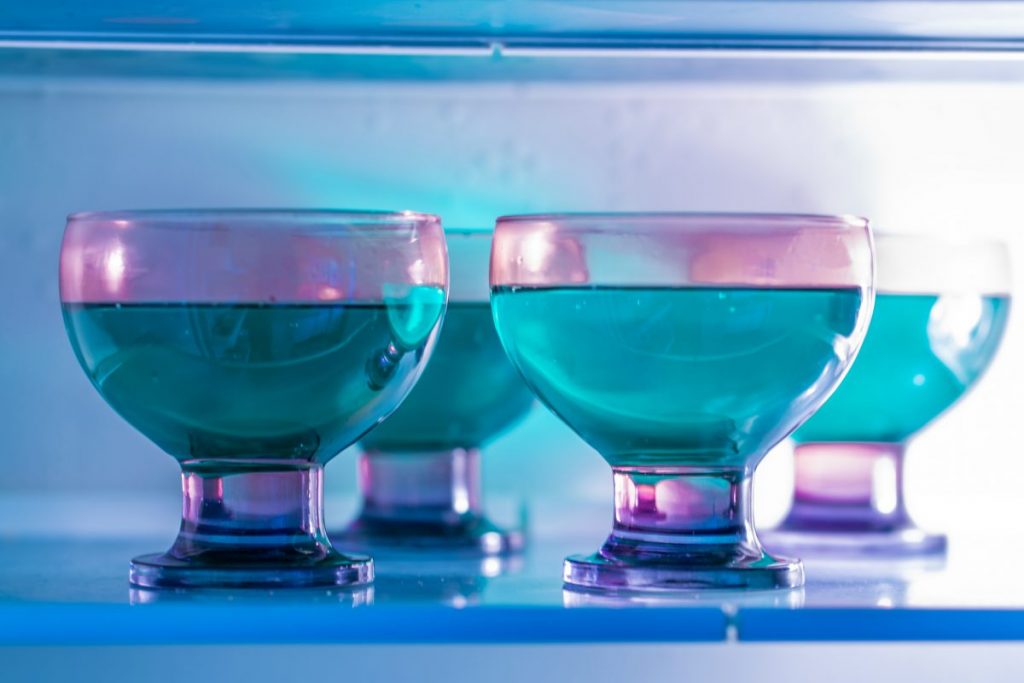 Combine orange Jell-O with vanilla-flavored vodka and triple sec for a dreamy Creamsicle flavor. Before serving this Jell-O shot, top each one with a little whipped cream to create the brilliant orange and clean white look of a Creamsicle popsicle. You'll feel like a kid again having this adult treat. 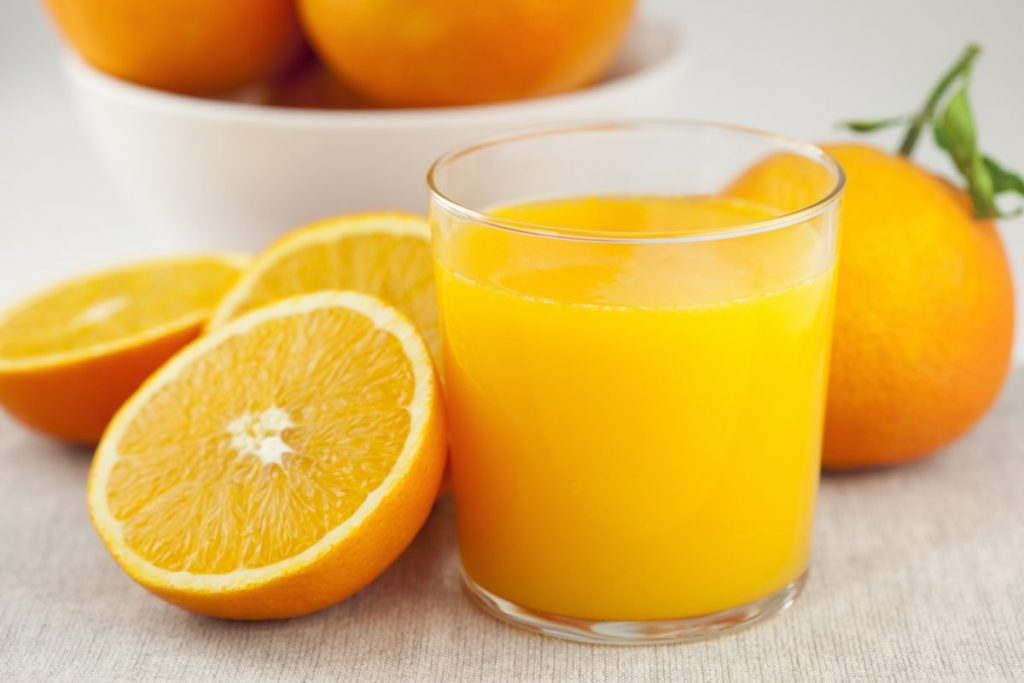 You can never go wrong with the fresh taste of strawberries, whether it's in a cocktail or a Jell-O shot. Create a daiquiri with strawberry Jell-O, a clear rum and Grand Marnier. Garnish each cup with a slice of strawberry and twist of orange peel for a treat that tastes like summer. 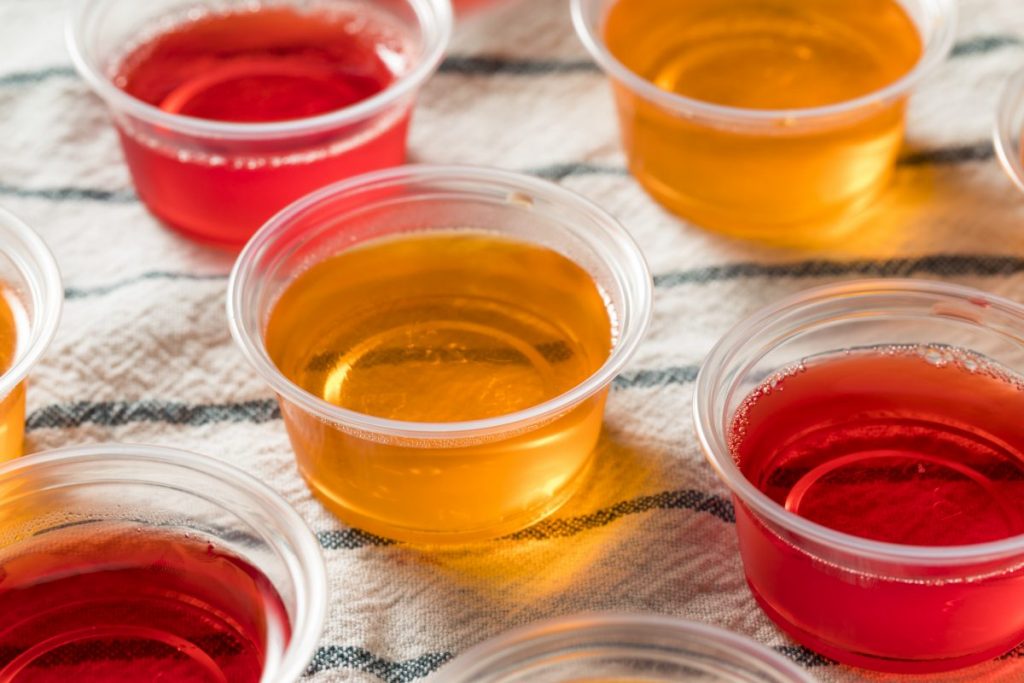 Feeling a little more adventurous? Plan to make several different flavors of Jell-O with vodka. Pour a small amount of one color into each shot cup, then refrigerate. When it is set enough that the colors won't bleed to together, make the next batch, and pour it on top. Create dual-flavor or multi-stripe Jell-O shots. 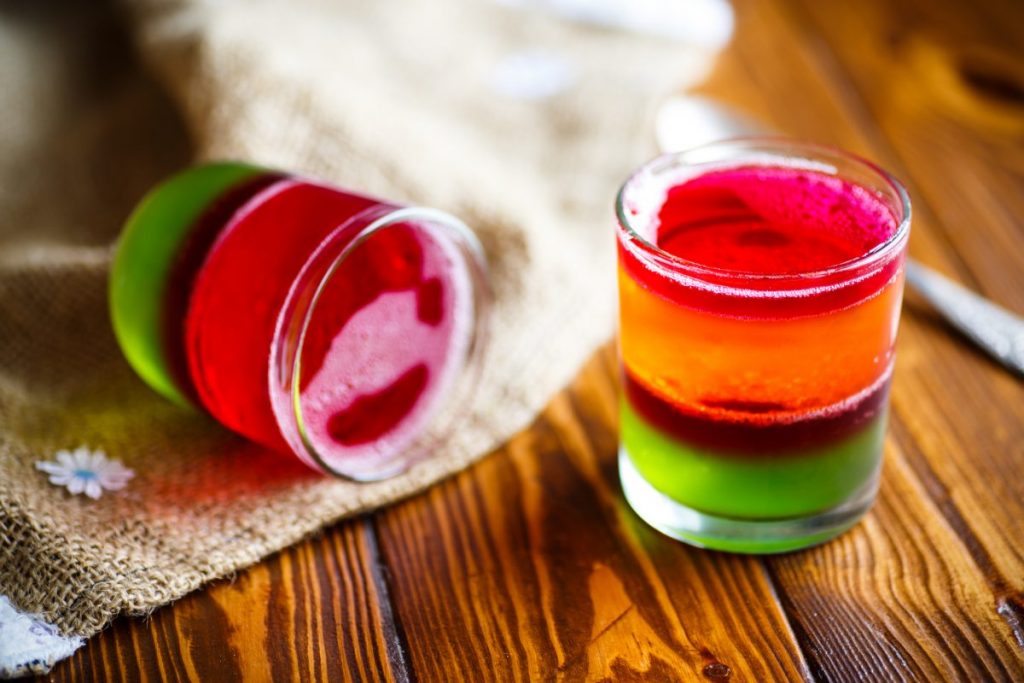