How to Make Bread Pudding

Bread pudding started as a frugal measure for stretching food stores and avoiding waste. People made bread pudding with anything they had available. It was often referred to as "poor man's pudding." Food historians have traced bread pudding to the early 11th and 12th centuries. Bread pudding is now prepared as comfort food at home and a sophisticated dessert in 5-star restaurants. This dish is still an excellent way to use up left-over bread and other foods, and the recipes and methods of preparation are nearly endless.

Break half a loaf of bread or four hamburger buns into pieces. Preheat the oven to 350°F and coat an 8 x 11-inch baking dish with cooking spray or butter. Bring 2 cups of milk to a boil in a saucepan. Add the bread, 2 whole eggs, 1 egg yolk, 1.5 teaspoons of nutmeg, 1/2 cup of sugar, and a 1/2 cup of butter to the saucepan. Mix everything thoroughly, then pour the mixture into the baking dish. Bake for 35 minutes until the surface looks brown and caramelized. 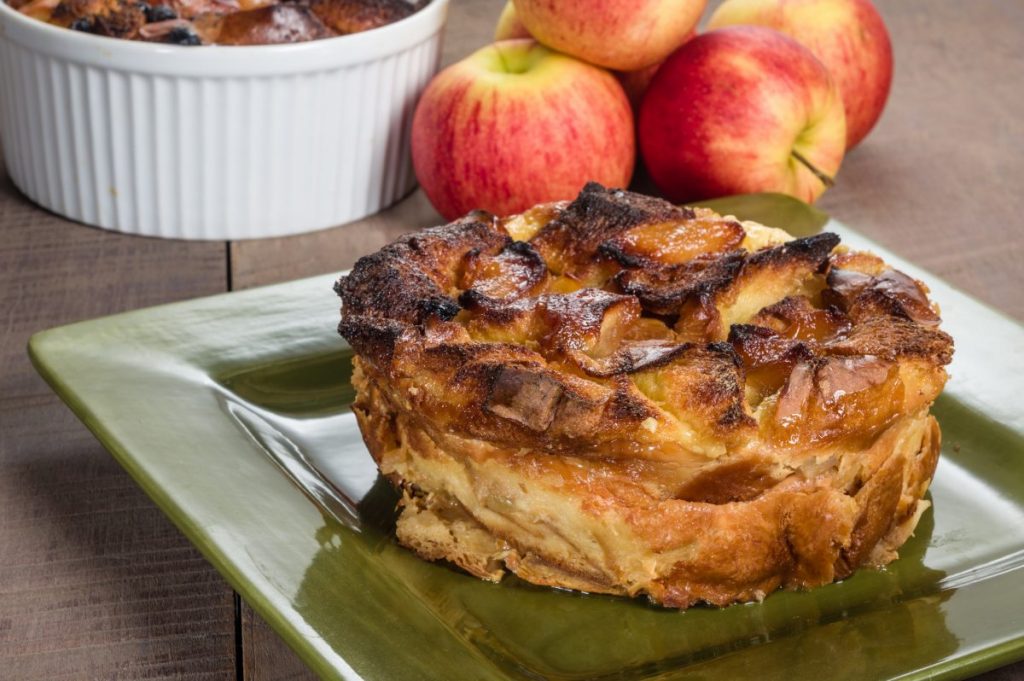 Preheat the oven to 350 degrees F. Coat a cast-iron pan with butter and break a loaf of day-old bread into pieces. Place the bread pieces into the skillet while mixing in 1/2 a stick of butter. Use a large bowl to beat 3 large eggs and 1/4 cup of sugar into a paste. Mix cinnamon and raisins into the paste. Heat 1 cup of milk, 1 teaspoon of vanilla extract, and 1 cup of heavy cream in a saucepan. When the milk mixture starts to boil, pour it over the bread in the cast-iron pan. Mix well and place the pan in the oven to bake for 40 minutes. Top the finished bread with raisins, pecans, cinnamon, or fruit preserves. 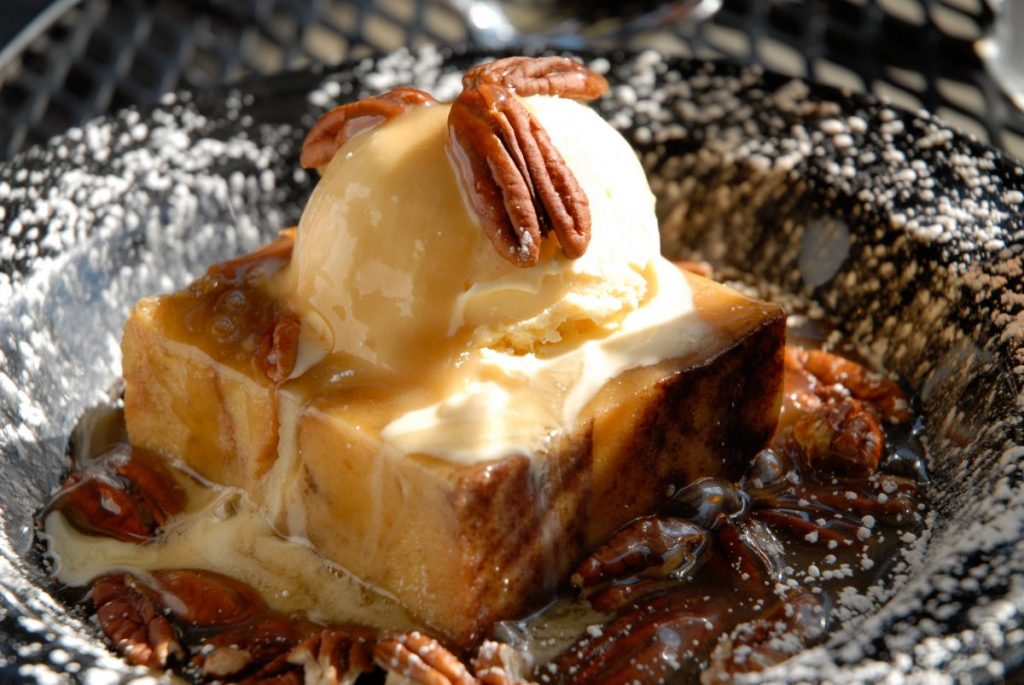 This is a traditional bread pudding with whiskey. Preheat the oven to 350°F, and soak 1/3 cup of any combination of cranberries, figs, blueberries, and raisins in 1/4 cup of whiskey. You can use almost any whiskey, but avoid those with added sweet flavors. Tear apart 6 sweet buns, then whisk 4 eggs, 1.5 cups of milk, and 2 tablespoons of melted butter in a separate bowl. Mix in 1 teaspoon of cinnamon and a 1/4 teaspoon of nutmeg. Pour the mixture over the bread pieces and transfer everything to a baking dish. Top the dish with rum and cranberries or other preferred toppings. Bake for 40 minutes. Sprinkle the finished dish with cinnamon and serve with ice cream. 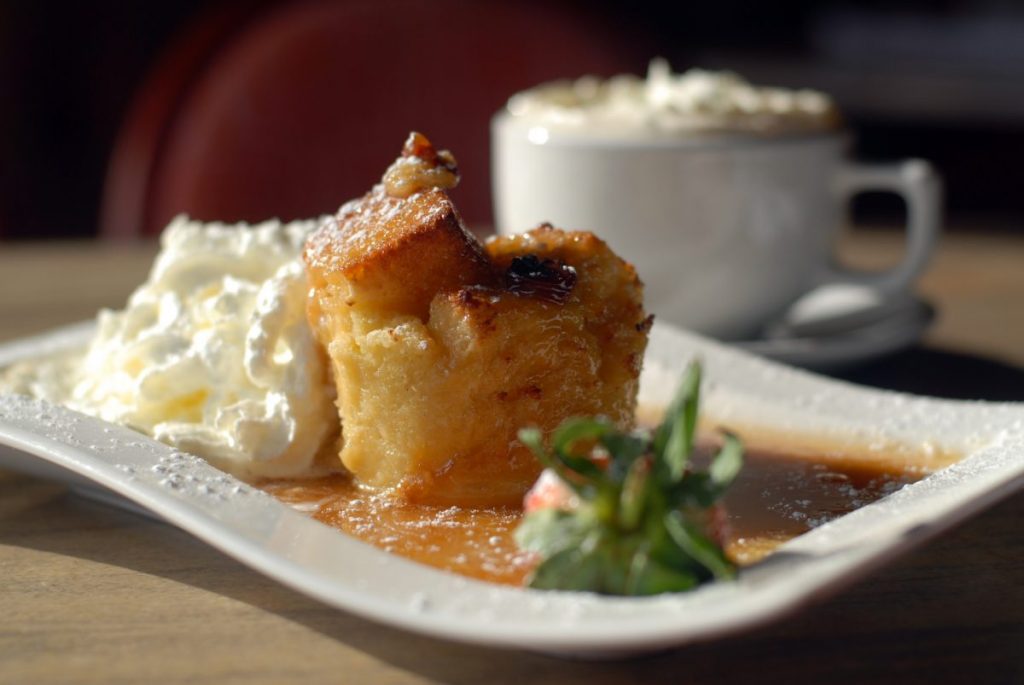 Cut 2 slices of bread into cubes and transfer to a shallow, microwave-safe bowl. Use a separate bowl to mix 1 large egg, 1/4 teaspoon of vanilla extract, and 3 tablespoons of sugar. Pour the mixture over the bread while gently stirring just enough to coat the cubes. Stir in any combination of 2 tablespoons of chocolate or butterscotch chips, dried fruit, and other fillings. Sprinkle with cinnamon and nutmeg. Cook the bread in 30-second intervals while stirring occasionally until it is thoroughly cooked. 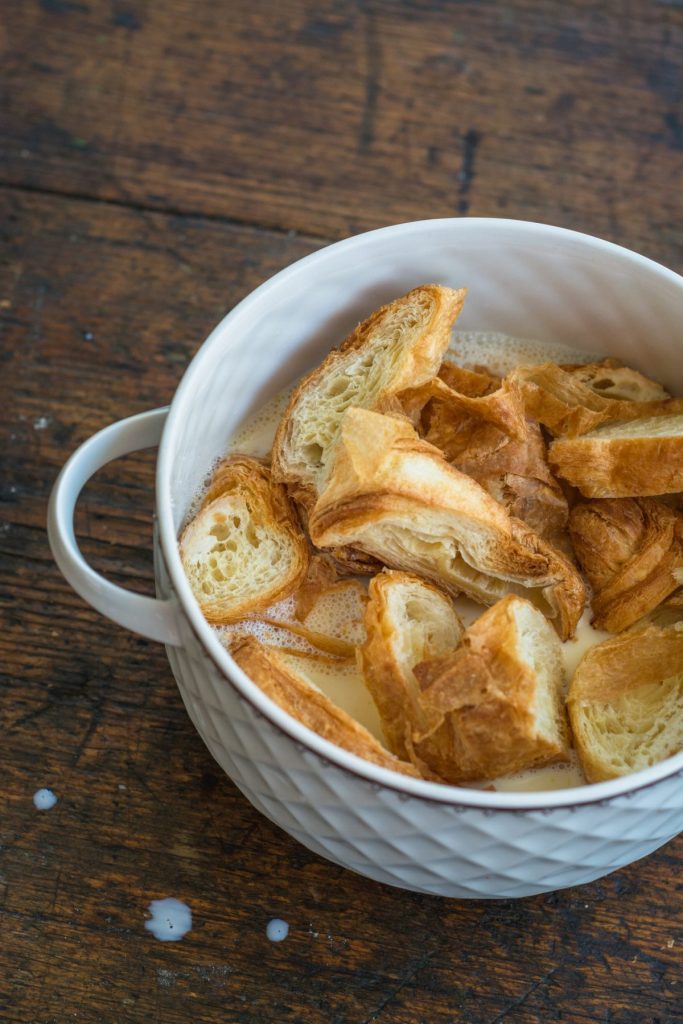 This recipe originated in the 15th century. Prepare the bread by tearing half a loaf of stale wheat bread into pieces. Saute the bread pieces in a 1/4 cup of butter until crispy. Use a separate pan to boil a 1/8 cup of water, 1/2 cup of honey, and 2 egg whites. Combine the honey sauce, bread, 1 cup of red wine, 1/2 cup of currants, and 1/8 teaspoon each of nutmeg, cloves, and salt. Put the entire mixture into a food processor or blender. The consistency should be smooth, but stiff enough to hold its shape. Add more bread if it is too soft. Mix in a 1/4 teaspoon of candied ginger. This bread pudding can be eaten at room temperature, although it may taste better baked in the oven at 400°F for 20 minutes. 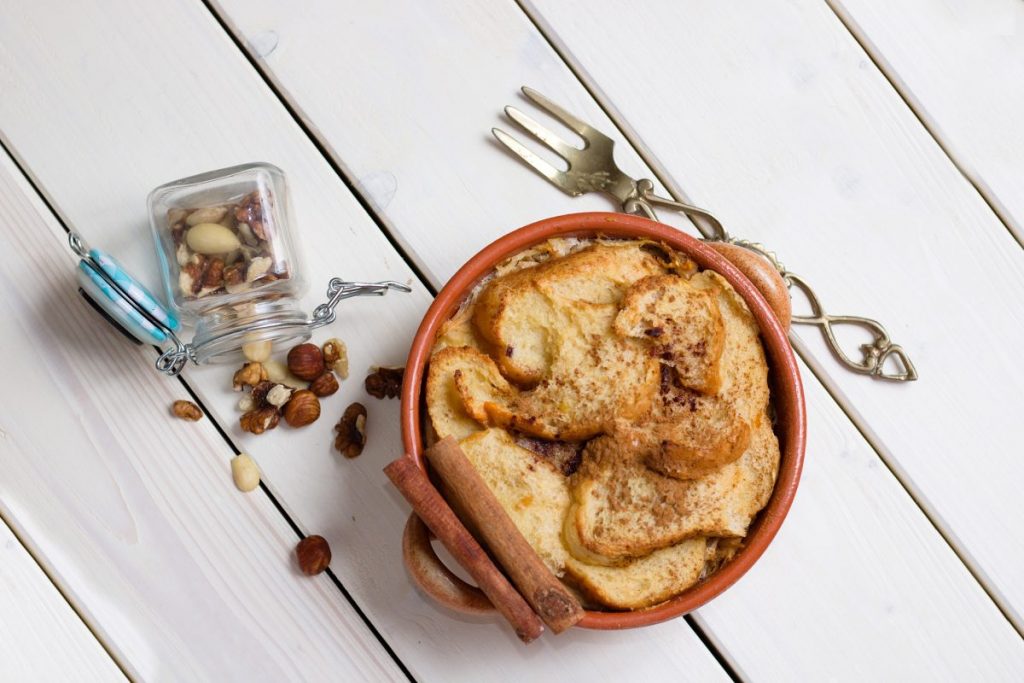 Sometimes called "clean out the fridge" bread pudding, start this recipe off by tearing a loaf or round of stale whole grain bread. If whole grain is not available, use other types of bread, biscuits, or croissants. Stale bread products are preferable. Layer the bread pieces in the bottom of a greased baking pan. Cover the bread with any sort of grated cheese. The cheese can be a mix of several types. Add generous amounts of raw or cooked vegetables, herbs, salami, lunch meat, or poultry. Make a custard using the rule of two eggs for each cup of milk. Season the custard with salt, pepper, and nutmeg, then pour it over the ingredients in the pan. Let the mixture sit for at least 15 minutes so the flavors mesh. Cover the pan with foil, and bake at 350°F until the center reaches 170°F on a cooking thermometer. 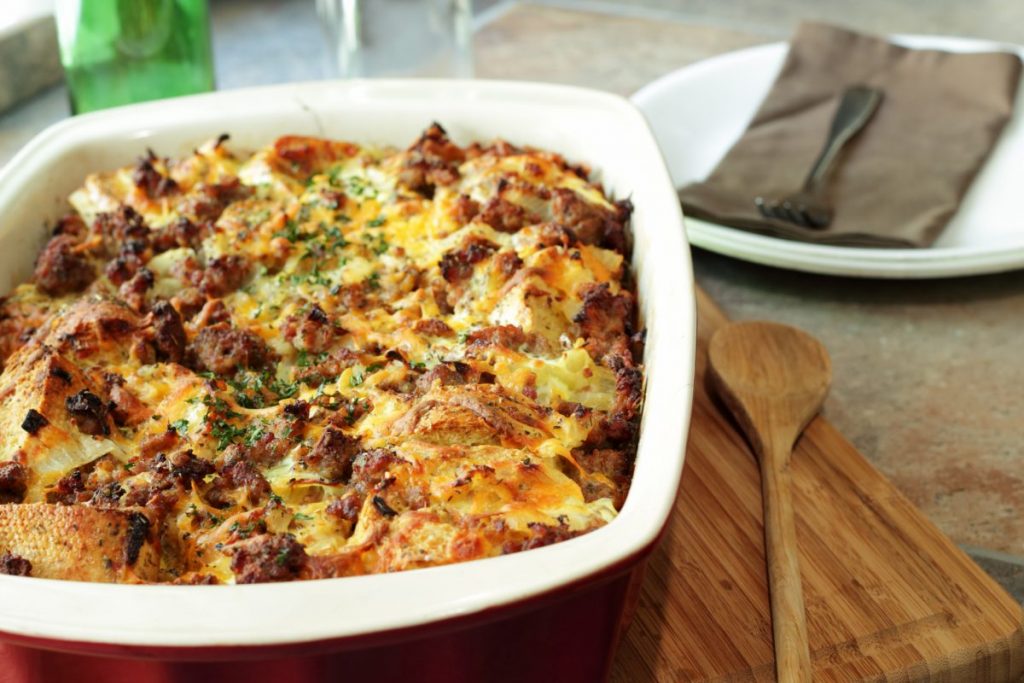 Cut one pound of stale spelt bread into cubes. Put the cubes in a large mixing bowl. Place 3 cups unsweetened almond or soy milk, 1/4 cup of flax seeds, 3/4 cup brown or coconut sugar, and 1/2 teaspoon of cinnamon in a blender. Blend the mixture to a smooth consitency, then pour it over the bread. Stir thoroughly, and let the bowl sit for an hour. Preheat the oven to 350°F. Scoop the pudding into a 9 x 9-inch baking dish, and bake for 60 to 70 minutes. 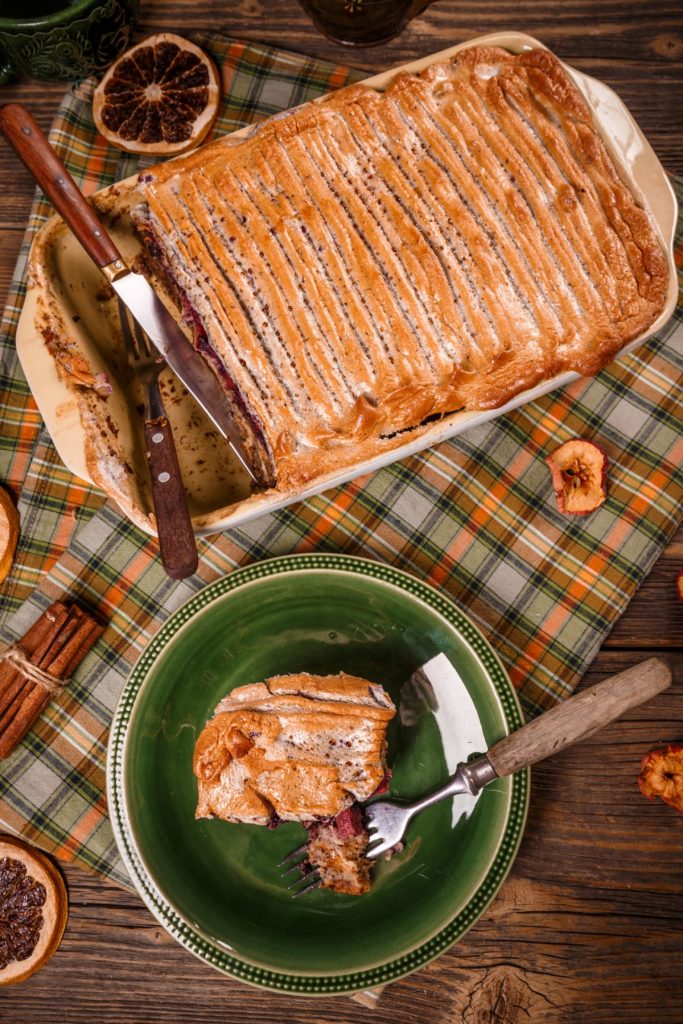 This recipe was adapted to explain how to make bread pudding with ingredients sitting in a pantry. Preheat the oven to 350ºF, and grease a 12 x 8-inch baking dish. Break up the equivalent of two loaves of bread. Whole grain bread is best, but a combination of buns, croissants, and even lightly sweetened snack cakes also works. Combine 1 can of coconut milk, 1 can of condensed milk, 2 large eggs, 3/4 cup packed brown sugar, and 1/2 teaspoon each of cinnamon and nutmeg. Mix the bread and 1 cup of raisins, dates, or other dried fruit in a separate bowl. Pour the mixed ingredients over the bread, then stir everything thoroughly and pour into the baking dish. Bake for 35 to 45 minutes. Serve with caramel sauce, whipped cream, or fruit preserves. 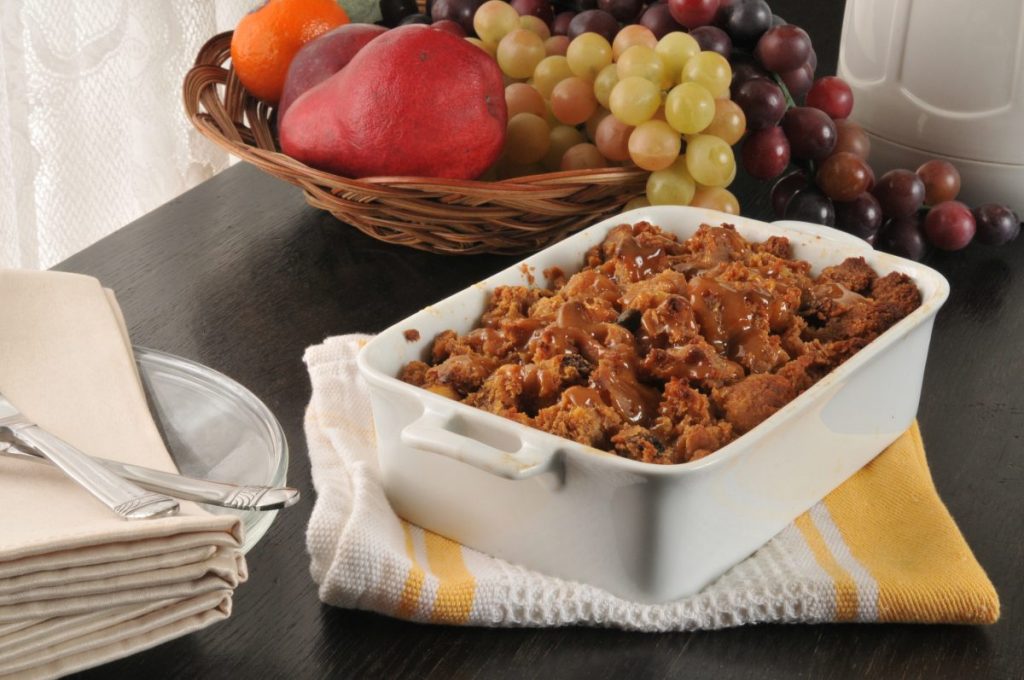 Bread Pudding in a Bag

This simple recipe is fun to try while camping, or as an unusual dish at home. Cut four slices of whole-grain bread into cubes. Toss the bread with 3 tablespoons of melted butter, 1/4 cup of raisins, 1/2 teaspoon of cinnamon and nutmeg, and 1/4 teaspoon of salt. Combine the bread mixture with 1/3 cup sugar, 2 tablespoons of powdered eggs, 1-1/2 tablespoons of powdered milk, and 2 tablespoons of bourbon. Pour all the ingredients into a large, sealable bag that is safe for boiling. Shake until the ingredients are thoroughly mixed, then submerge the bag horizontally in boiling water for five minutes. Flip the bag and boil for another 5 minutes. The mixture should be soft and springy when finished. 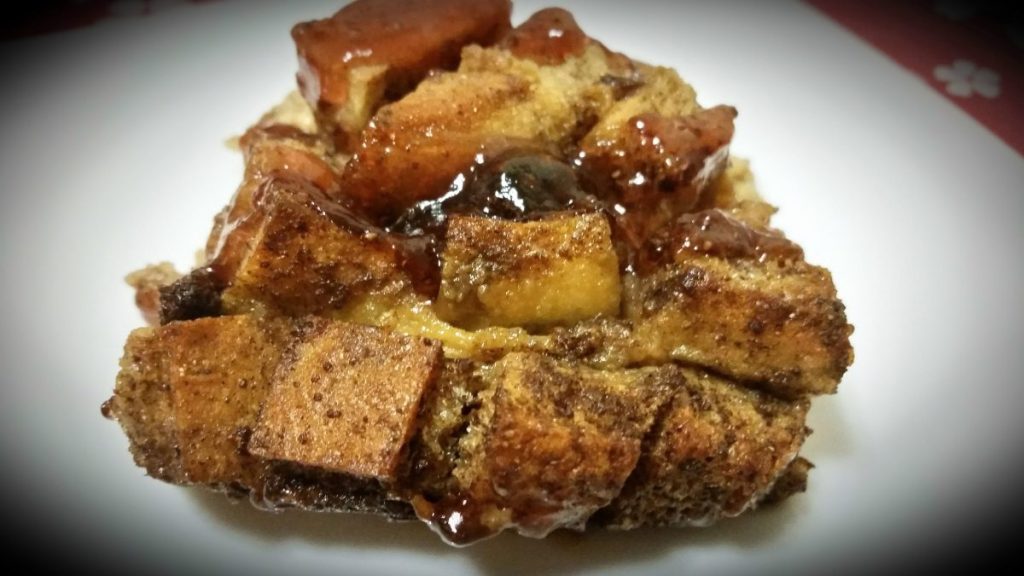 Sailors, soldiers, and other people who eat basic survival foods quickly learned how to make bread pudding from hardtack, also called ship's bread or soldier's biscuits. Preheat an oven to 375°F. Mix 2 cups of flour, 1/4 cup butter, shortening, or fat, and a cup of water with 4 teaspoons of salt. Press the dough into 3 x 3-inch pieces with a 1/2-inch thickness and bake for 30 minutes. Flip each biscuit and bake for another 30 minutes. This bread is very hard. A popular recipe for hardtack bread pudding starts with a 1/2 cup of water and 1/2 cup of bourbon or whiskey. Add dried fruit, leftover meat or fat, soups, broth, or anything else available. Break the hardtack into pieces, and let it soak in the mixture for an hour. Bake for 15 to 20 minutes in an oven or in a cast-iron pan over a campfire. 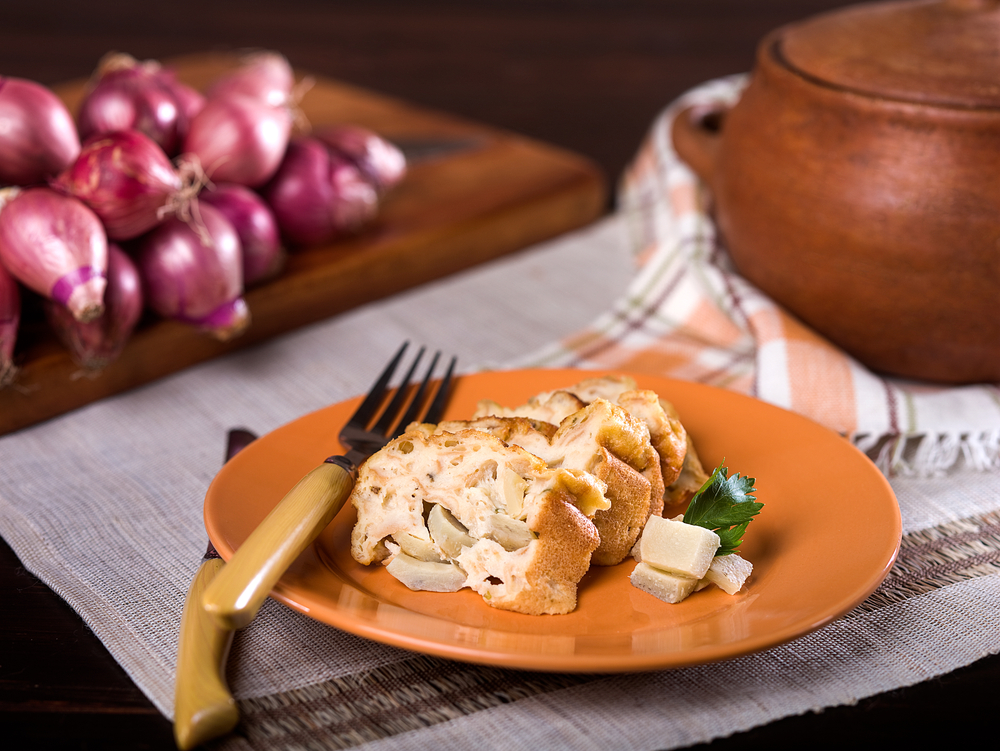