How to Make Beef Bourguignon

Beef Bourguignon is a delicious beef stew traditionally made with red wine, beef, beef stock, and hearty stew vegetables like carrots and onions. It has long been a favorite for Sunday dinners across European tables, and despite it's difficult to pronounce name, it isn't a difficult dish to cook at all. With easy to follow steps you'll be able to reproduce this delicious meal for your family whenever you'd like! Give it a try today and your taste buds will agree that beef bourguignon is a real winner for dinner.

What is beef bourguignon?

Beef bourguignon is a stew with beef chunks that have been braised in a type of red wine, known as Burgundy wine, and beef stock. Traditionally the meat is then stewed with carrots, onions, garlic and garnished with sweet pearl onions, earthy mushrooms, and salty bacon. The recipe hails from France, but it is believed to have received its name from the type of wine used in cooking rather than from the Burgundy region of France. 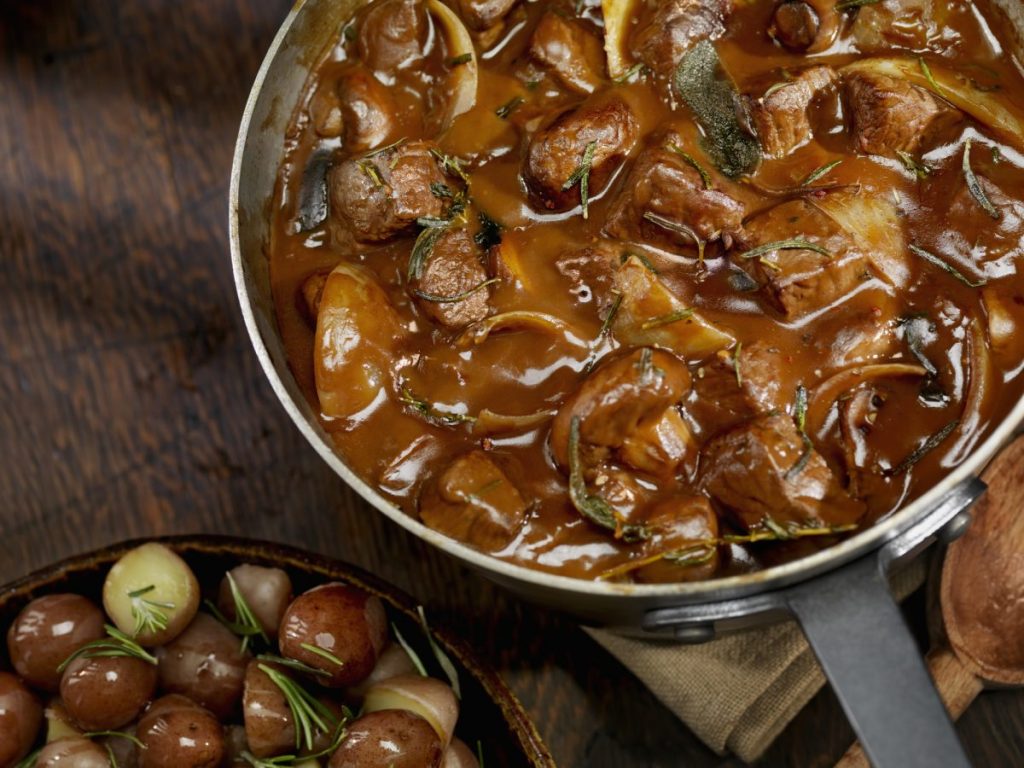 When was it first made?

Though it is considered a 'traditional' French dish, beef bourguignon wasn't first recorded as a recipe until the 19th century. The recipe wasn't considered a specialty until well into the 20th century though now it is a standard in French restaurants, particularly in Paris. Julia Child felt the dish was one of the most delicious beef dishes ever created! 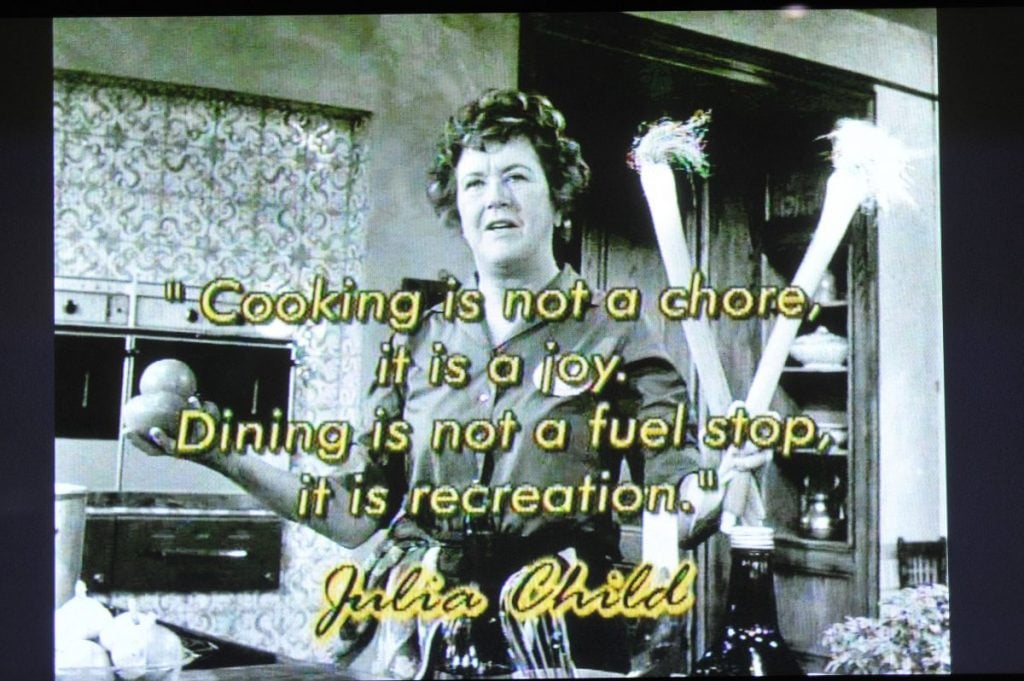 What are the ingredients of beef bourguignon? 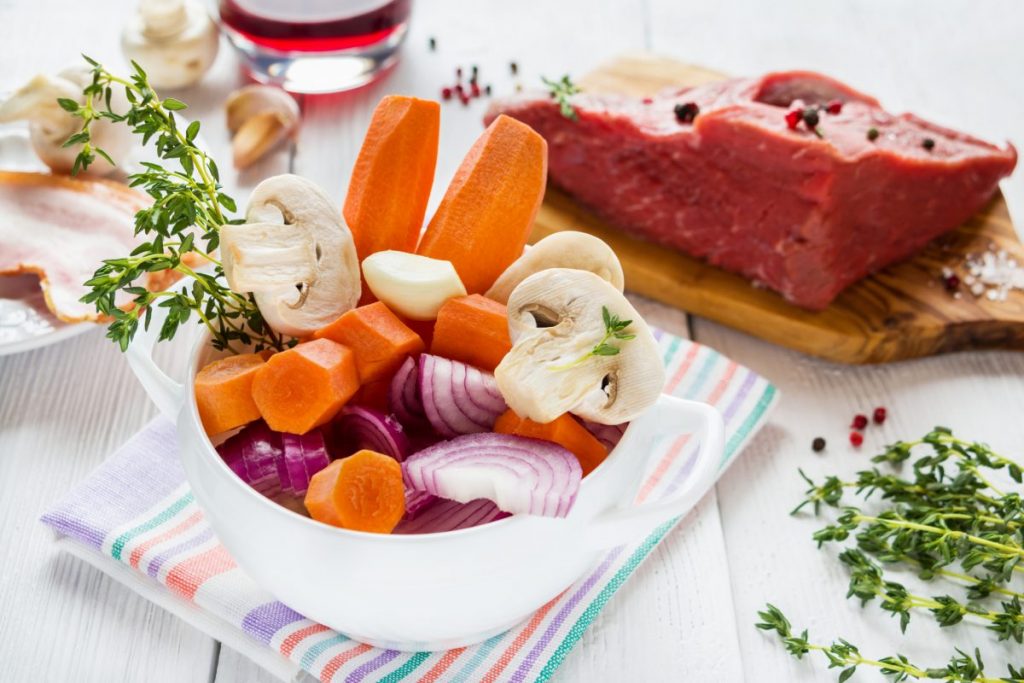 Begin your recipe by adding the beef and flour to a ziplock bag and close it up. Shake until all the beef pieces are coated. You want to do this so that when you brown the beef you seal in all the moisture but also so that the beef bourguignon thickens without running the risk of clumps that could be caused by adding flour later in the recipe. 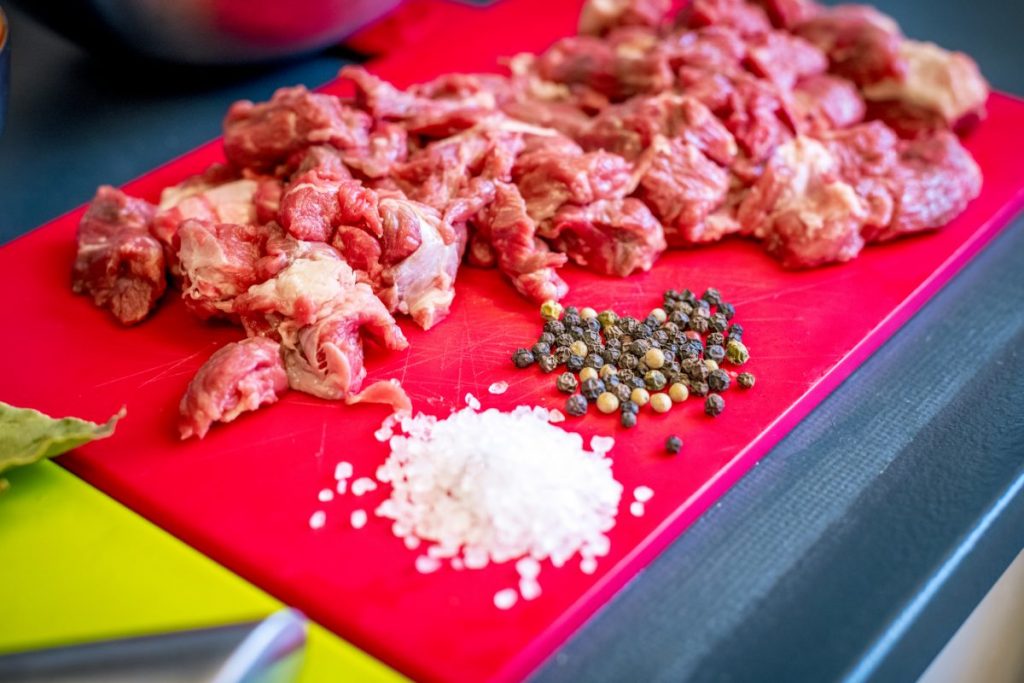 Start your meal by heating the olive oil in a large Dutch oven or pot with a heavy bottom. Then add the bacon and cook until it is just crispy. Line a plate or bowl with paper towels, drain the bacon as you remove it from the pot and set it on the paper towels to finish draining. Add the stew beef to the bacon grease and olive oil in batches, not all at once. Cook until golden brown on all sides then transfer to a plate and set aside with the bacon. 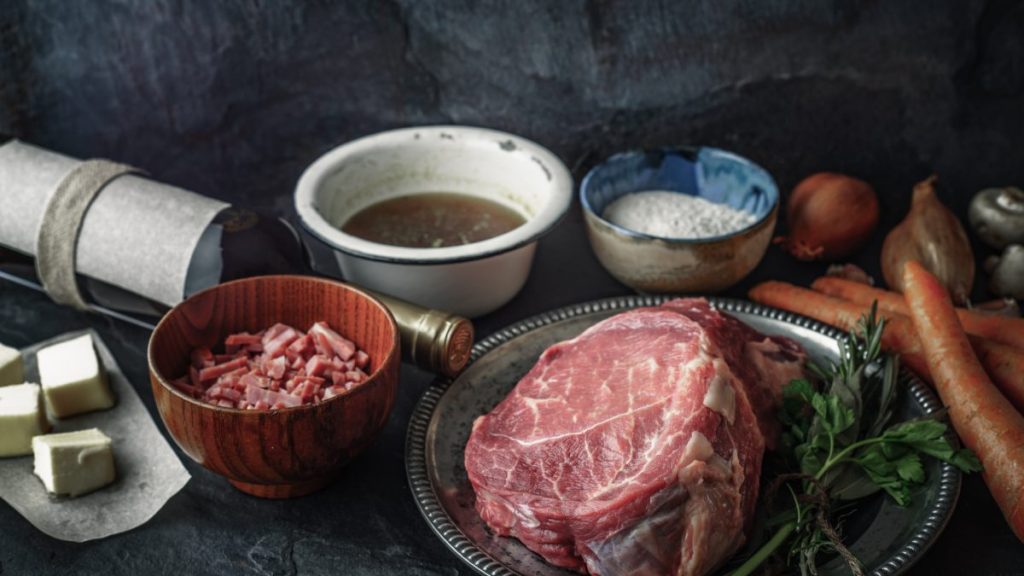 Add the chopped carrots, diced onions, and pearl onions to the remaining bacon grease and olive oil. Season with the salt and pepper, then stir in the garlic and continue cooking until the onion is tender and translucent. Focus on the diced onions more than the pearl onions though they should be starting to soften. Stir the mushrooms in then cook for another couple of minutes. 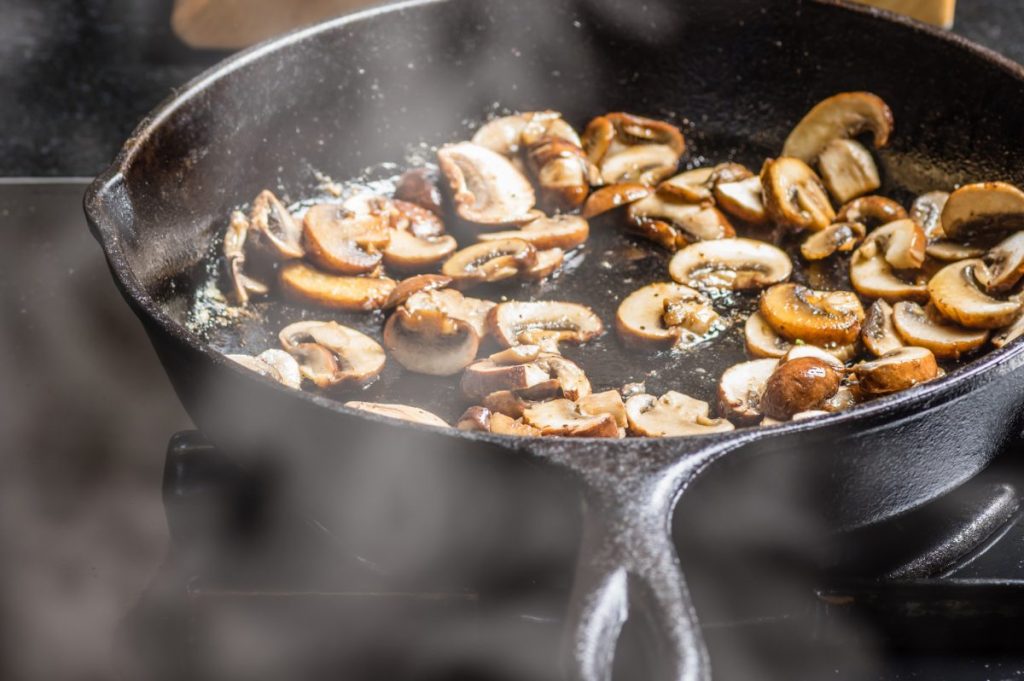 How do I finish my beef bourguignon?

When the vegetables are done you can add the beef and bacon back to the pot. Add in the red wine, beef broth, and tomato paste, then stir together and bring to a boil. Stir occasionally to keep it from burning on the bottom.

While you are bringing the mixture to a boil, preheat your oven to 325 degrees Fahrenheit. Once the oven is ready and your stew is boiling, cover it with a lid and slide it into the oven. It should cook for two and a half hours. Every hour remove the lid and stir, being sure to scrape the bottom. 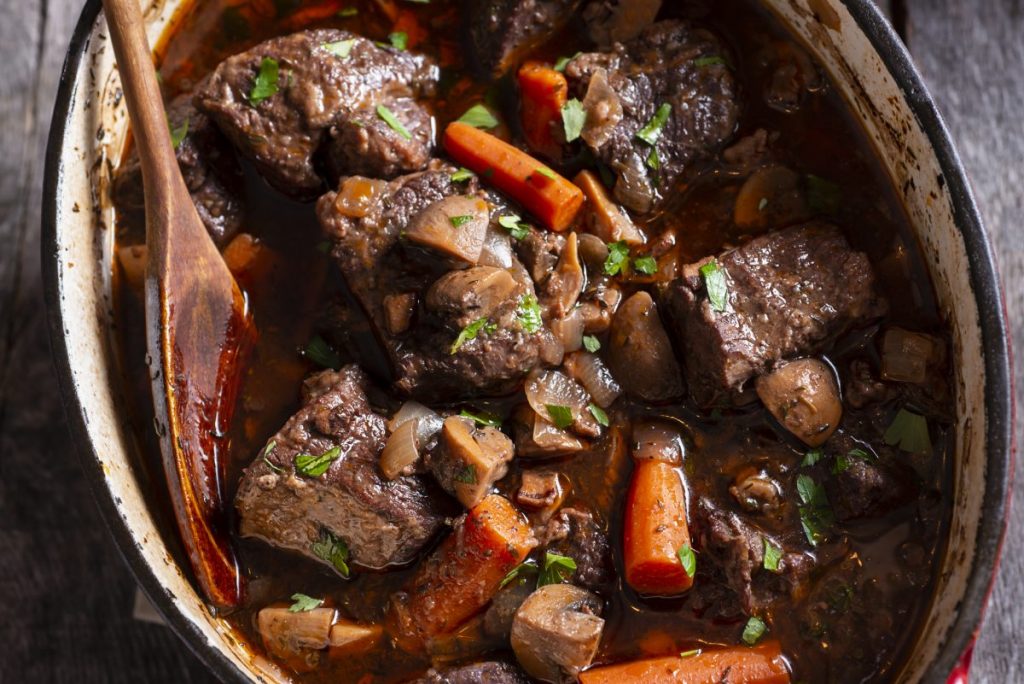 Serve Beef Bourguignon on a Plain Base

Traditionally beef bourguignon is served with potatoes or noodles. Potatoes can be mashed or roasted. Roasted potatoes add a deliciously light crunch to the meal, but they can be a challenge to make. Wide egg noodles similar to those used in Swedish meatballs are perfect for a hearty layer of beef bourguignon. You'll want to use wider noodles because they can hold up better to the heavy meat, vegetables and sauce! 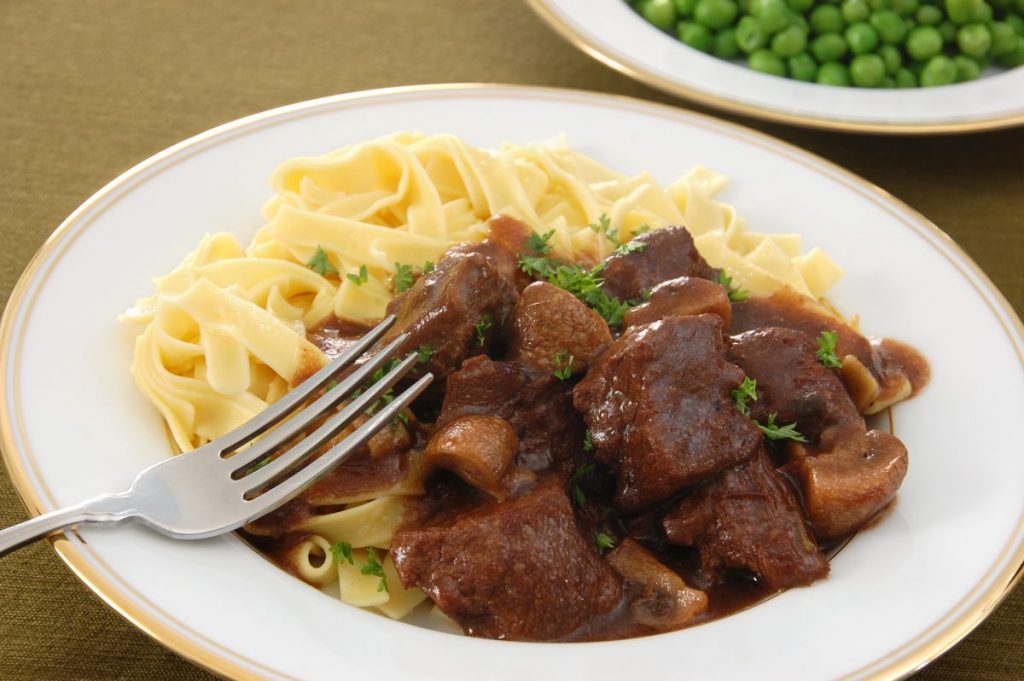 Choose a Yummy Side Dish

The best side to serve with beef bourguignon is a simple loaf of delicious, crusty French bread. It can absorb the sauce and juices as it helps you clean your plate, and it quite delicious as a side on its own with just some warm butter. If you're looking for a starter to serve with your beef bourguignon, consider a light salad. It won't take up too much room in your guests' stomachs, and they'll be able to enjoy all the flavors that the dish has to offer! 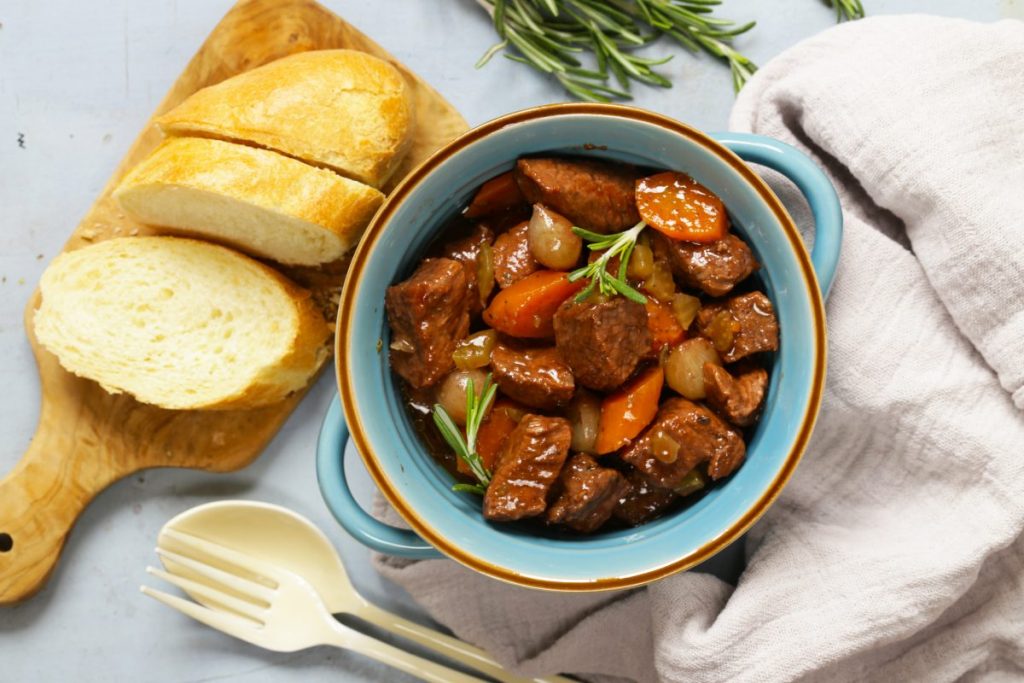 What dessert should be served after beef bourguignon?

Beef bourguignon is a very heavy meal, as most beef-centered meals tend to be, so you want to avoid offering a dessert at the end that is also rich and heavy. While you may be tempted to go for a rich chocolate dessert consider something much lighter. One of the best desserts to offer with a dish like beef bourguignon is simply fresh berries with a little whipped cream and a hint of mint. Mint eases the stomach and the berries provide a bright burst of freshness that your guests and family will love! 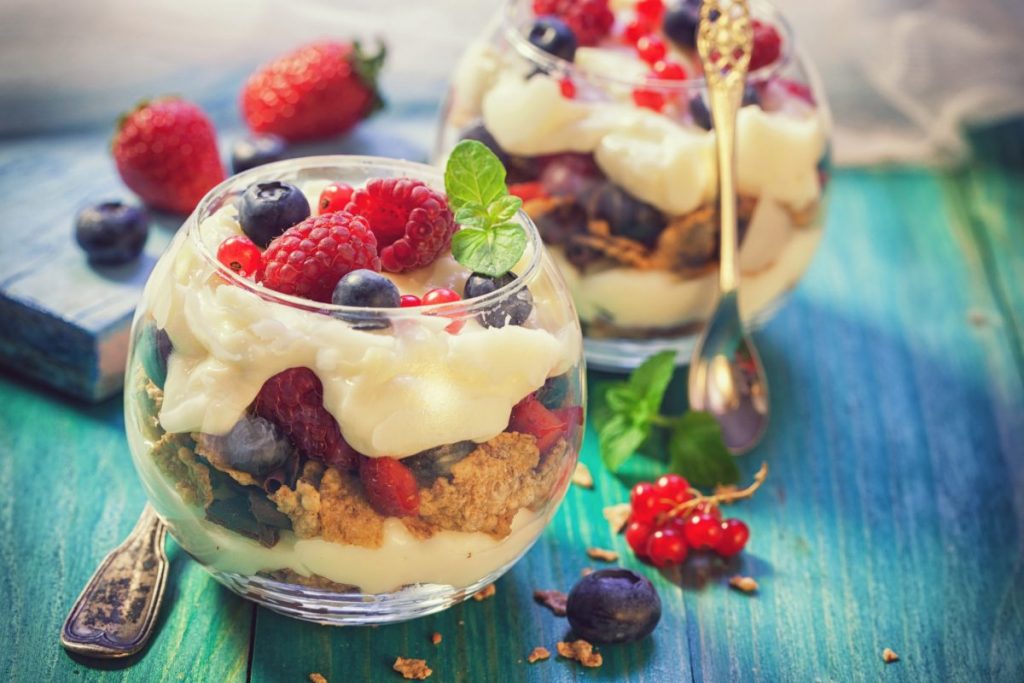