How To Make Amazing Alfredo Sauce

Alfredo sauce is the creamy, delicious ingredient integral to incredible dishes such as Fettuccine Alfredo. Learning to make Alfredo sauce from scratch is a valuable skill sure to impress families, friends, and dinner party guests. Pre-made varieties of Alfredo sauce taste good, but only a homemade sauce will make an exceptional dish. Containing both butter and Parmesan cheese, it's difficult to find someone who dislikes this Italian-inspired delicacy.

According to legend, Alfredo sauce was created in 1912 in Rome. The sauce gets its name from chef Alfredo di Lelio, owner of a Roman restaurant named "Alfredo's." The sauce is based on an Italian dish, Fettuccine Al Burro, which features a similar sauce but contains far less butter. 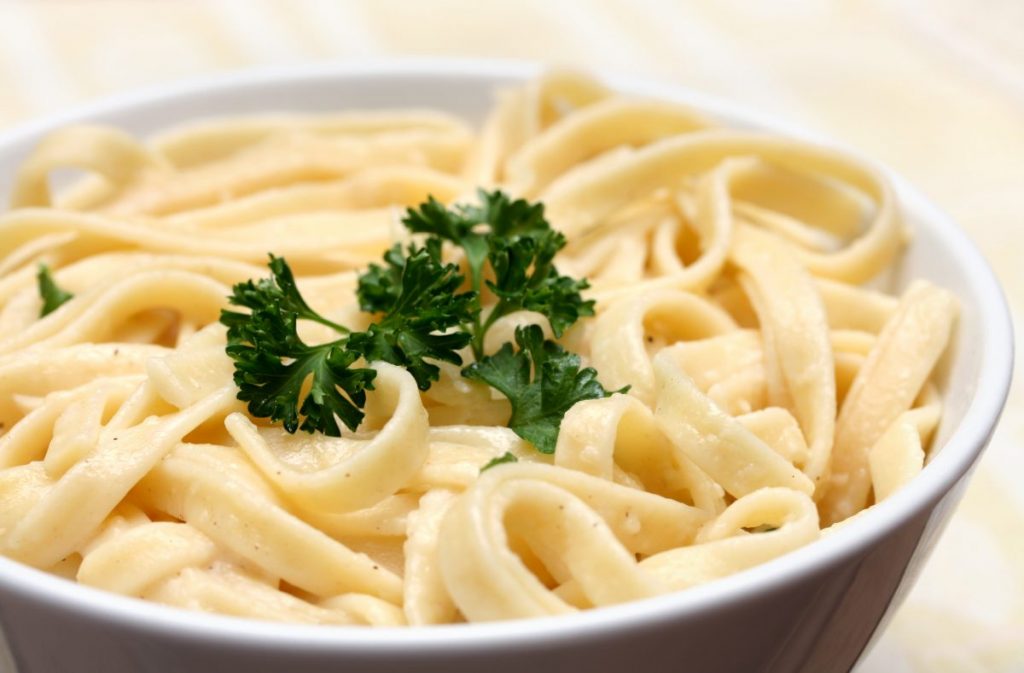 Alfredo sauce made the journey to the United States in 1927, when honeymooning film stars Mary Pickford and Douglas Fairbanks first tried it in Rome. They were so impressed they brought the recipe home to America and served it to their friends. It quickly caught on in Hollywood and shortly became a national Italian-American favorite. 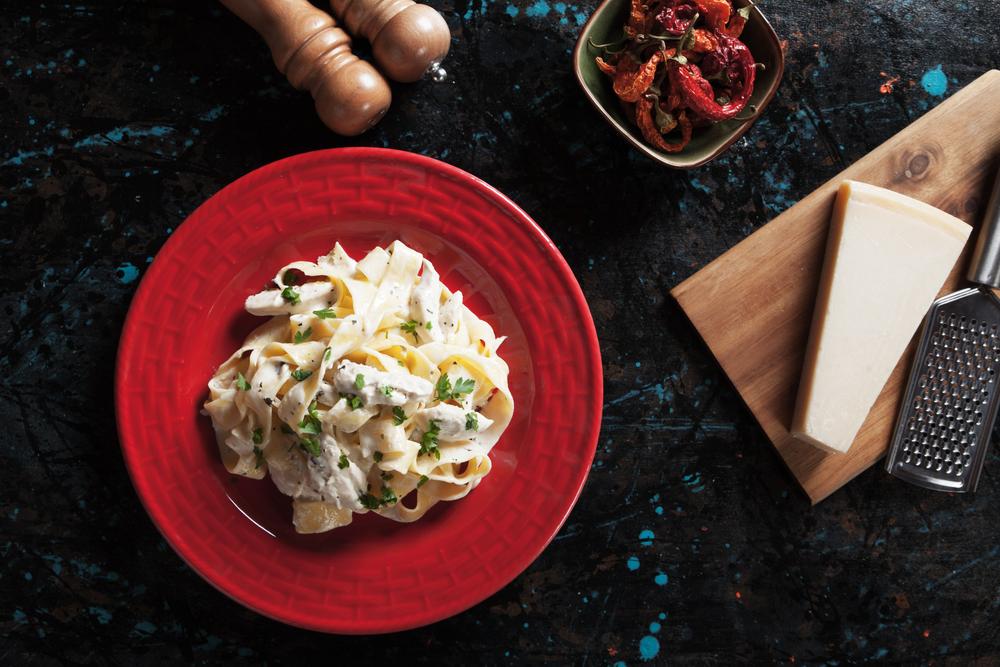 The original Alfredo sauce contained mainly butter and Parmesan cheese, so when it was introduced to the United States, those who wanted to make it faced a challenge. The butter and Parmesan available in America were far less rich and creamy than their counterparts in Italy. This variation of ingredients caused the recipe to evolve and include heavy cream to add richness to the home-made Alfredo sauce. 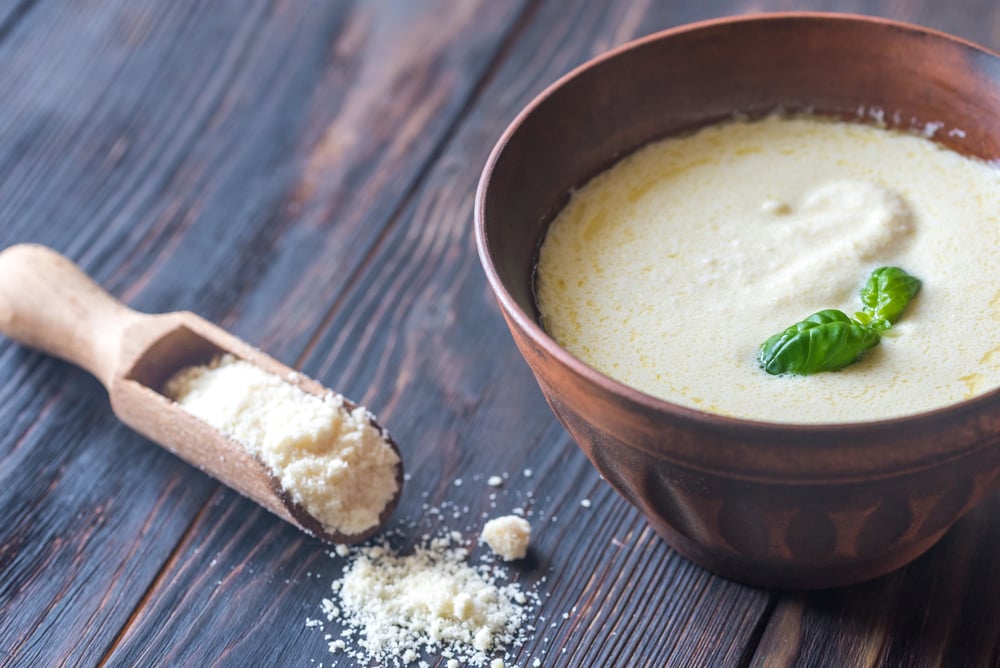 People enjoy Alfredo sauce for all the flavor and texture butter, Parmesan cheese, and heavy cream--in the American version--add to the recipe. Heavy cream is the high-fat layer skimmed off of milk before pasteurization. Parmesan is an aged cheese described as having a bitter, salty, and burning taste. Butter consists of at least 80% milkfat churned into a solid consistency. All three of these ingredients contain high amounts of fat that create a sensation of fullness and richness, a combination people around the world love. 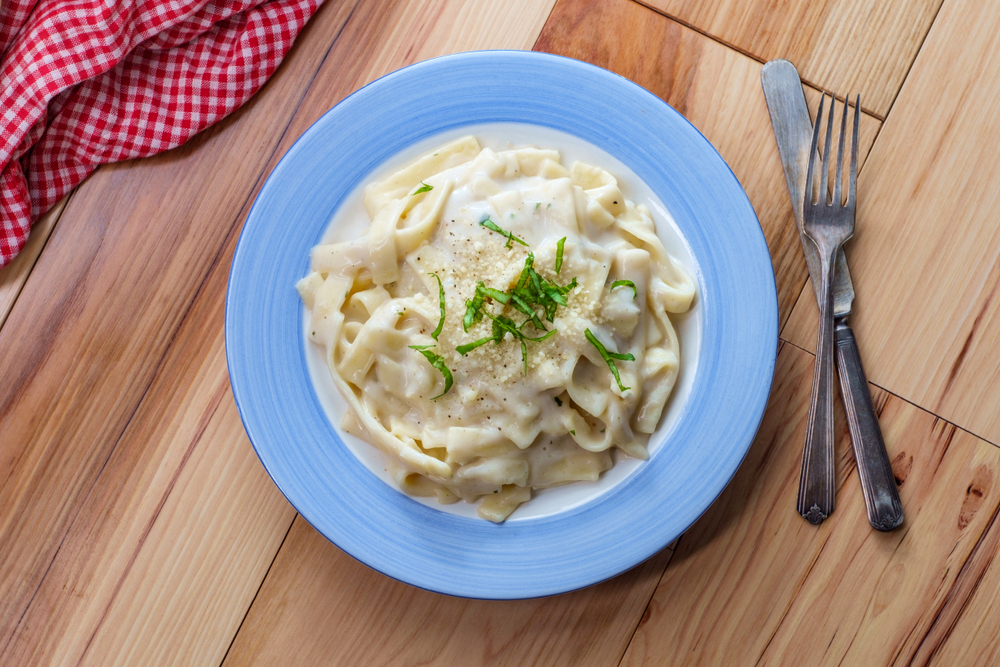 Heavy whipping cream, butter, and Parmesan cheese are key to making an excellent Alfredo sauce. A great Alfredo also contains salt, pepper, garlic, and Italian seasoning. The heavy whipping cream is available in most grocery stores. For butter, you can use the salted or cultured version. Cultured butter will provide a creamier texture, but it's not required for a great sauce. For greater flavor, use fresh minced garlic rather than its powdered varieties.

To make the best version of Alfredo sauce, get the Parmagiano-Reggiano, the Italian Parmesan cheese. Its name, "Parmagiano-Reggiano," should be stamped on the rind to ensure authenticity. For the rest of the ingredients, any brand of seasonings may be used. 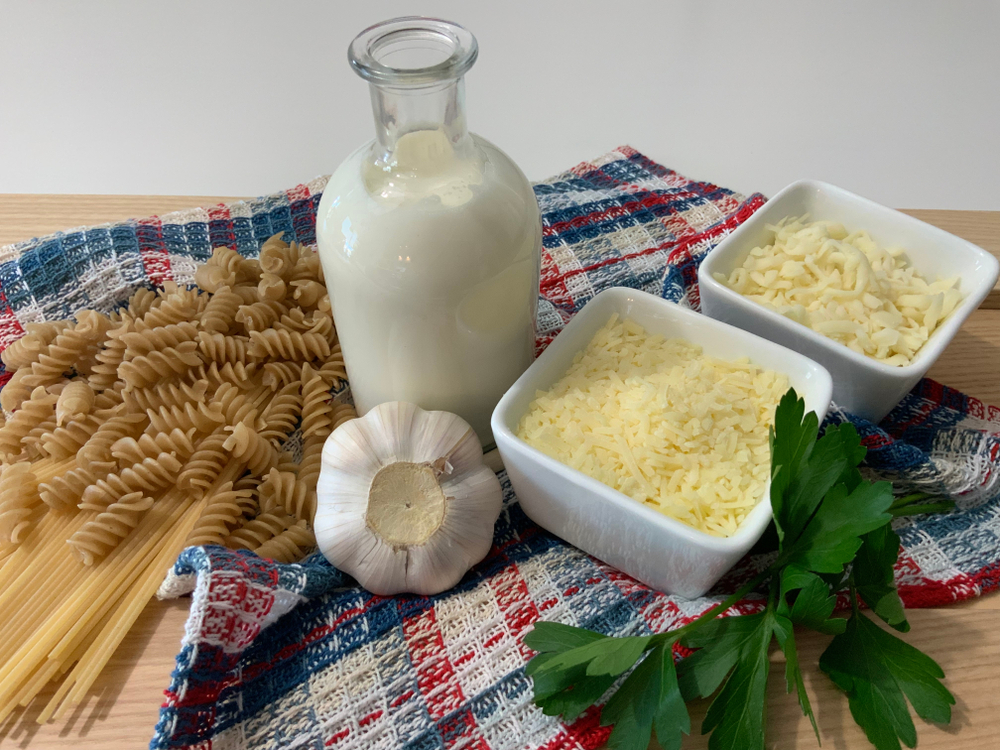 How To Make Homemade Alfredo Sauce

Mix the cream and butter in a sauce-pan. Use 1/2 a cup of butter and 1 1/2 cups of heavy whipping cream. Stir over low heat until the butter melts and the mixture is lightly simmering. Next, add 2 teaspoons of minced garlic, 1/2 teaspoon Italian seasoning, 1/2 teaspoon salt, and 1/4 teaspoon pepper. Stir the mixture well, then grate 2 cups of Parmagiano-Reggiano and add to the mixture. Stir until the cheese melts and the mixture is silky and smooth. The cheese will thicken the sauce. Remove the sauce from the heat and let it sit for 2-3 minutes before serving. travellinglight / Getty Images

Mistakes To Avoid When Making Alfredo

When making Alfredo at home, there are a few things to avoid: 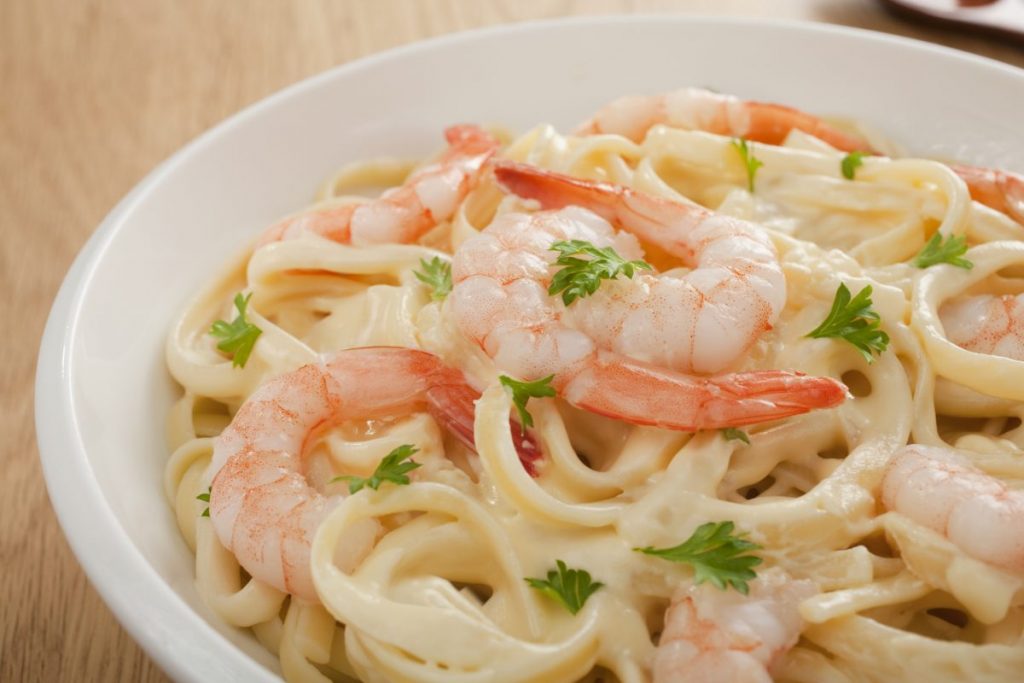 Why You Should Always Make Your Own Alfredo

Grocery store pre-made Alfredo may be a tempting way to save time and effort, but the simplicity and higher quality of the homemade Alfredo sauce are worth the trade-off. Pre-made Alfredo is often loaded with starch, artificial flavoring, and preservatives, and also lacks flavor, texture, and richness in comparison. It also contains a large list of un-natural ingredients that are not part of a healthy diet. 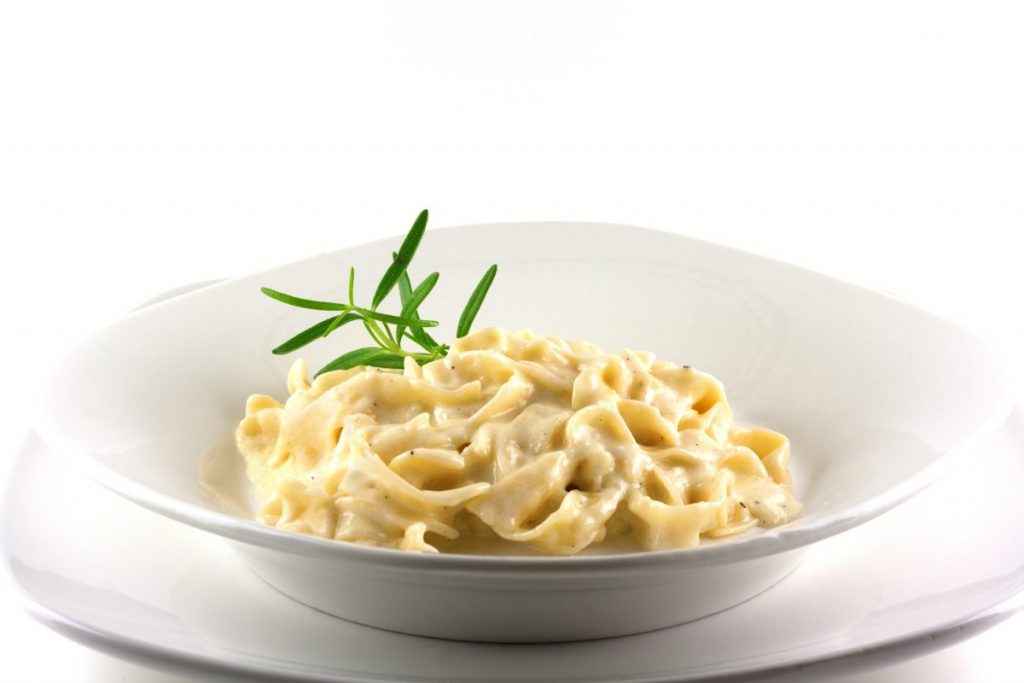 Meat, poultry, and fish make excellent protein additions to Alfredo dishes. Some classic combinations are shrimp Alfredo and chicken Alfredo. A good method is to cook the protein until it's almost finished and then let it simmer in the sauce to cook it thoroughly. Vegetables can also be added by themselves or in addition to protein. A common vegetable people add to Fettuccine Alfredo is peas, as its flavor pairs excellently with the sauce and adds a nice color to the dish. 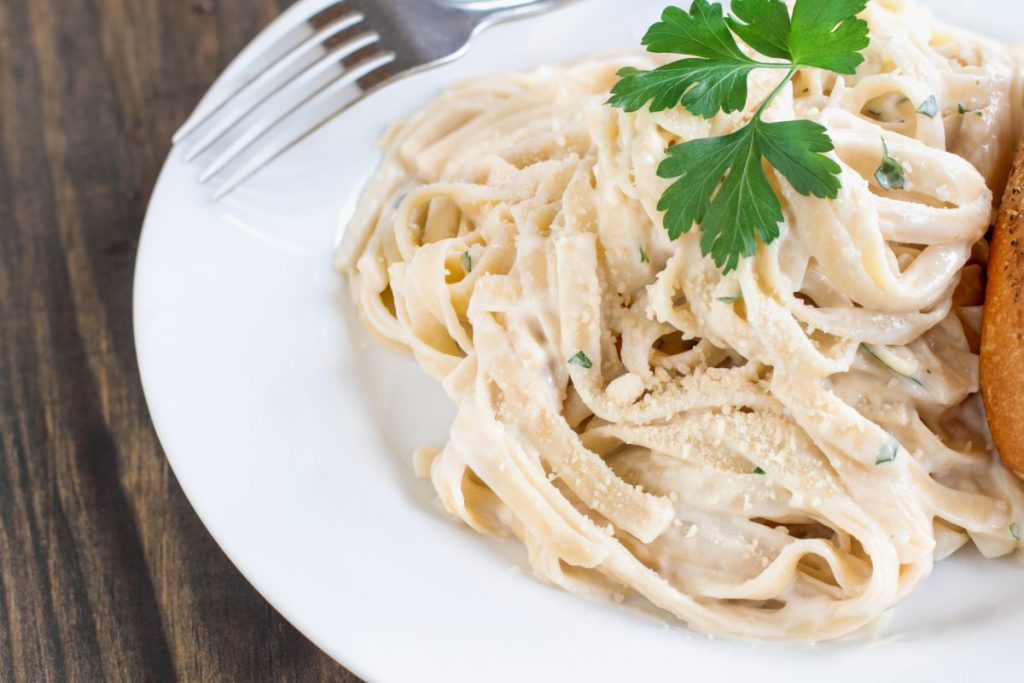 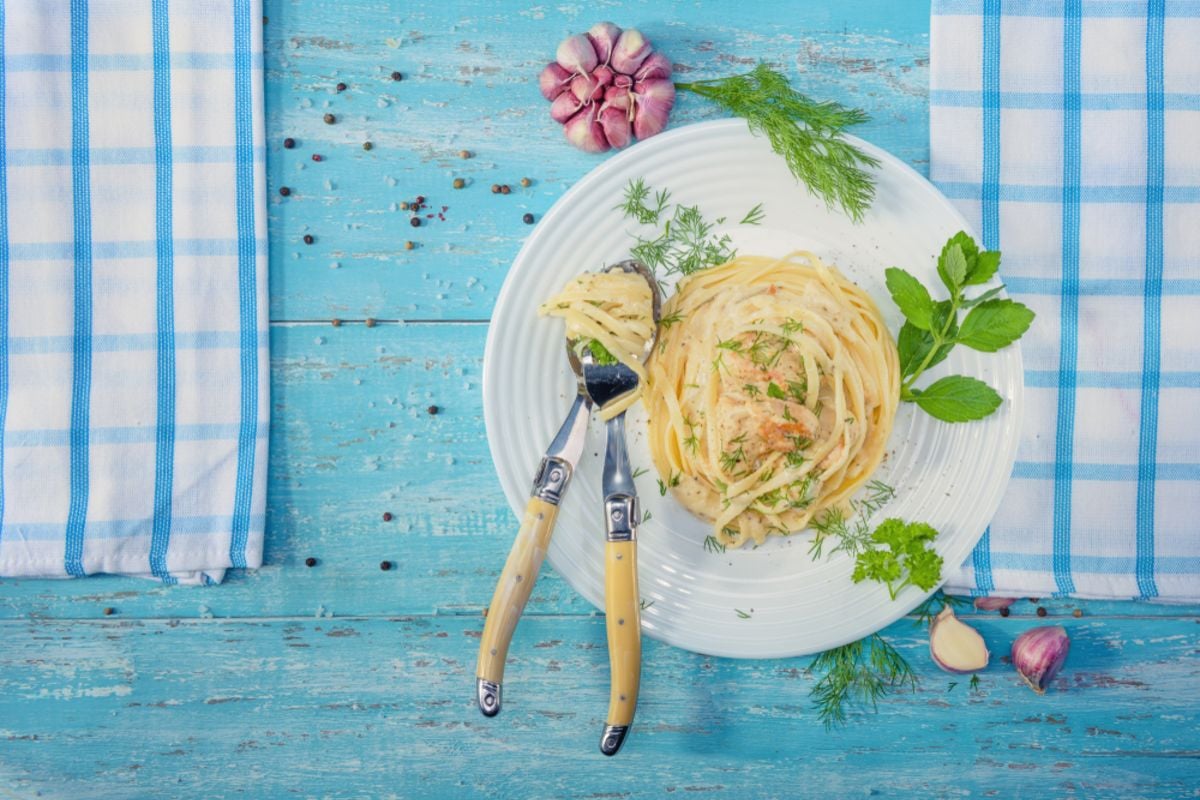