How to Grill Salmon - 10 Great Recipes

HomeHow to
View content in gallery
By Lisa, Facty StaffUpdated: May 10, 2019
Advertisement

Wood smoke, sweet sauces, savory flavors, and simple, elegant cooking styles show the versatility of a simple salmon filet. Grill it outdoors or use your kitchen grill to produce healthy fish entrees for your family or lucky guests. There's a taste difference between wild-caught salmon and farmed which you may find significant enough that you're willing to pay the premium. Make sure you invest in garnishes to properly plate your finished piece. Unless noted, all recipes grill over medium-high heat, 6 to 8 minutes total for inch-thick fish, or until it reaches 135-145 degrees F and flakes easily.

You can cook most grilled salmon recipes with a smoky flavor using cedar planks or wraps soaked in salty water. The wraps take only about ten minutes to get nice and wet, but the planks should soak for two hours or more. For wraps, place fish on the wrap, fold and begin cooking seam side down or tie with natural fibers. Use medium-high heat for three or four minutes a side until fish flakes easily. For planks, place the wet plank on the medium-high grill by itself for three or four minutes until you smell the smoke, then flip the plank, add the fish on top and cook with the cover on until the fish is 135 degrees F internally and flakes easily. 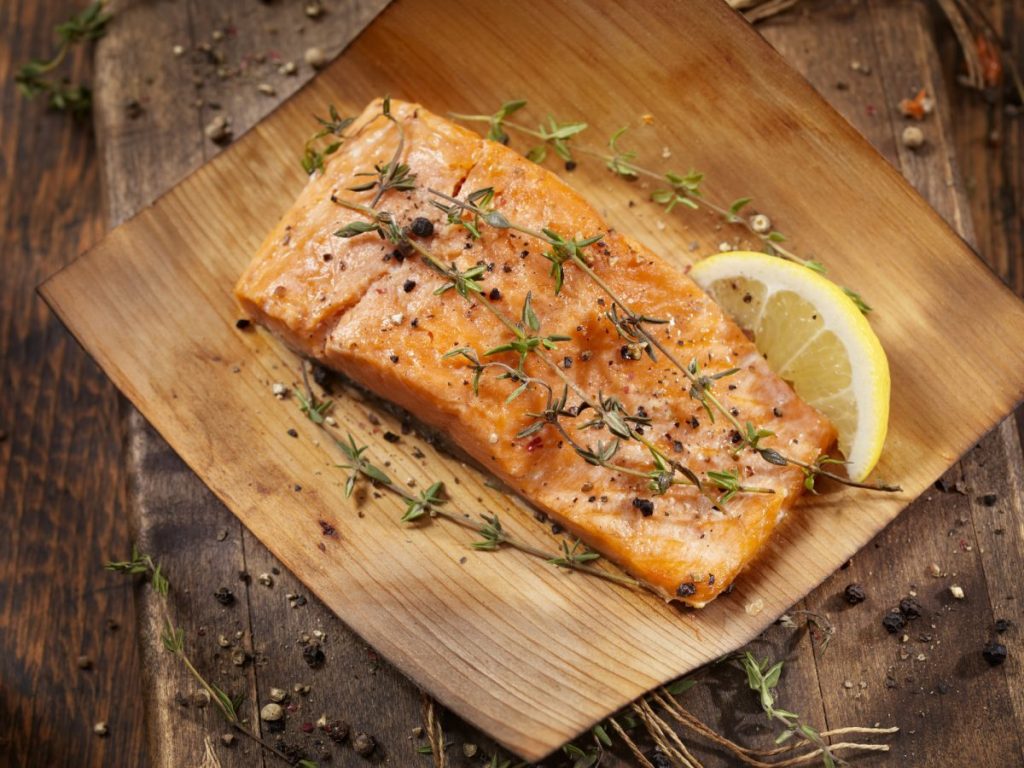 Grilled Salmon with a Spicy Glaze

Boil and stir a mixture of 1/4 cup brown sugar, three tablespoons Dijon mustard, two tablespoons of soy sauce and 1/4 teaspoon of sesame oil with 1/4 teaspoon each of salt, black pepper, ground ginger, and paprika or cayenne pepper. Coat the salmon with the glaze before grilling and once or twice as it finishes cooking. 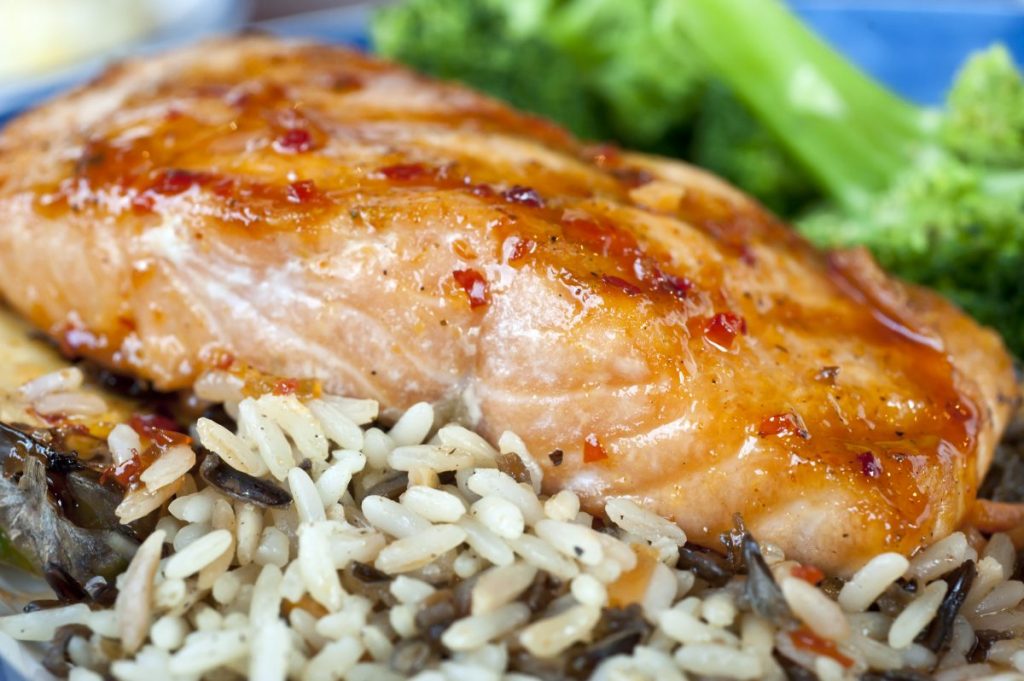 Lightly oil the non-skin side with olive oil, season with part of a teaspoon of combined salt and pepper or similar spice mix. Put the fish in a plate and pour a tablespoon of the oil with the rest of the spice mix over the steaks and let sit for 30 minutes. Grill covered as in the intro, garnish with dill or similar twig and provide lemon wedges for diners to use to taste. 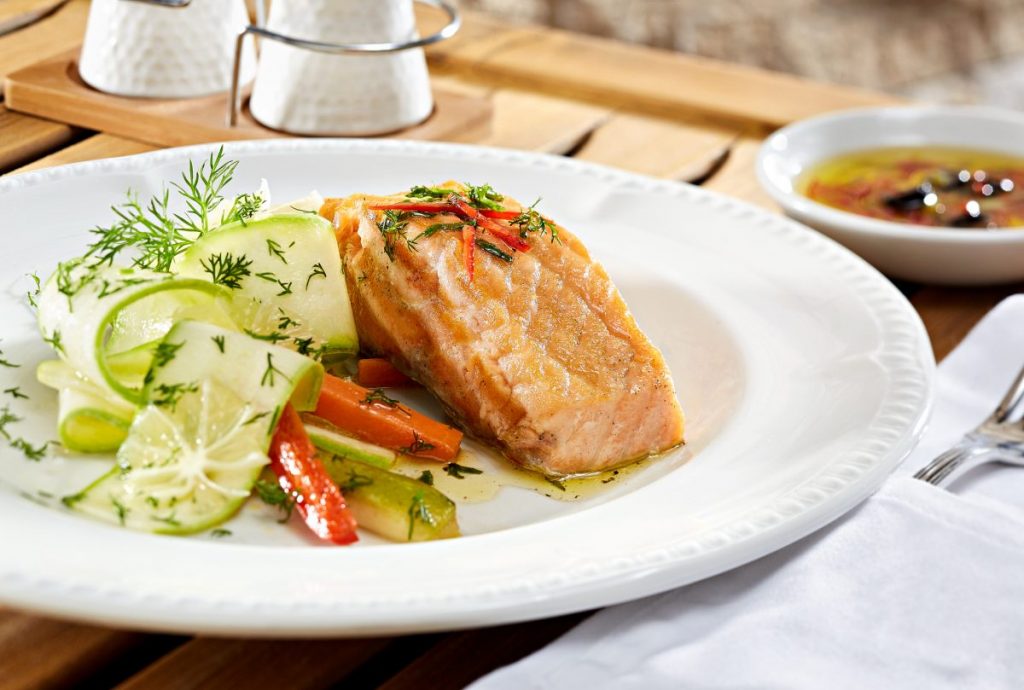 There are so many herb combinations which go well with grilled salmon including dill, chives, tarragon and this simple combination of two tablespoons each minced garlic, basil, and melted butter. Mix them and coat the fish, grill as in the intro. Or, add a veggie in tightly sealed foil packs with 1/4 pound trimmed asparagus, herb butter, and salmon. Cook a bit longer, about 6-8 minutes a side. 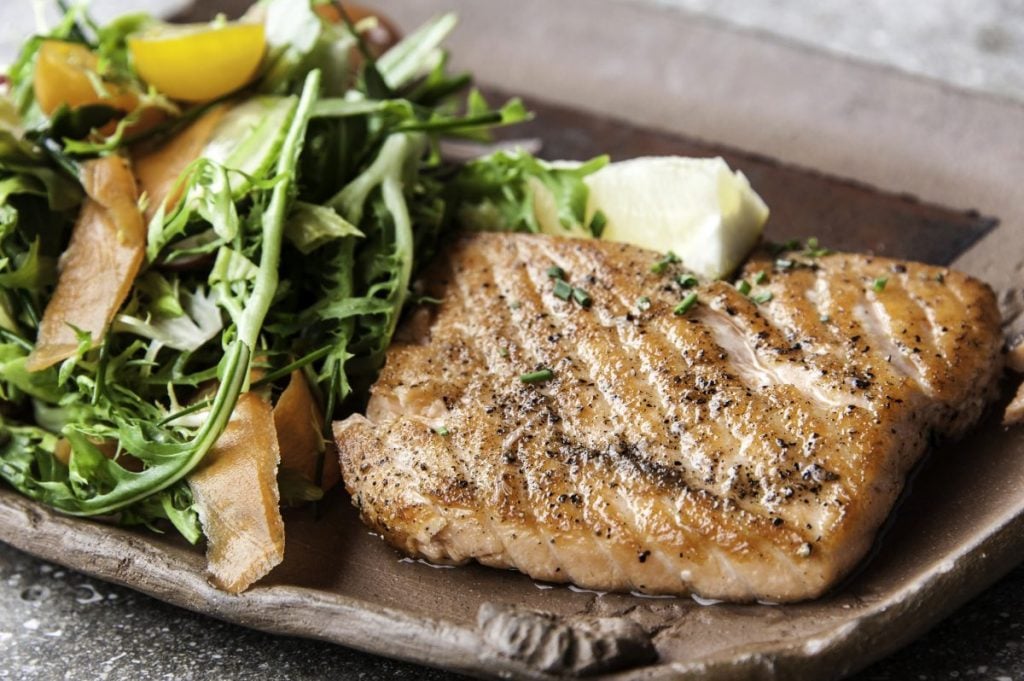 Rub your salmon with olive oil and your favorite Cajun spice mix or another spicy rub, then let it sit for about a quarter of an hour. Cook as in the introduction, and enjoy the combination of fresh fish and spicy heat. Coat the trimmed asparagus with olive oil and a bit of salt and pepper, then give them a couple of minutes at high heat on the grill. 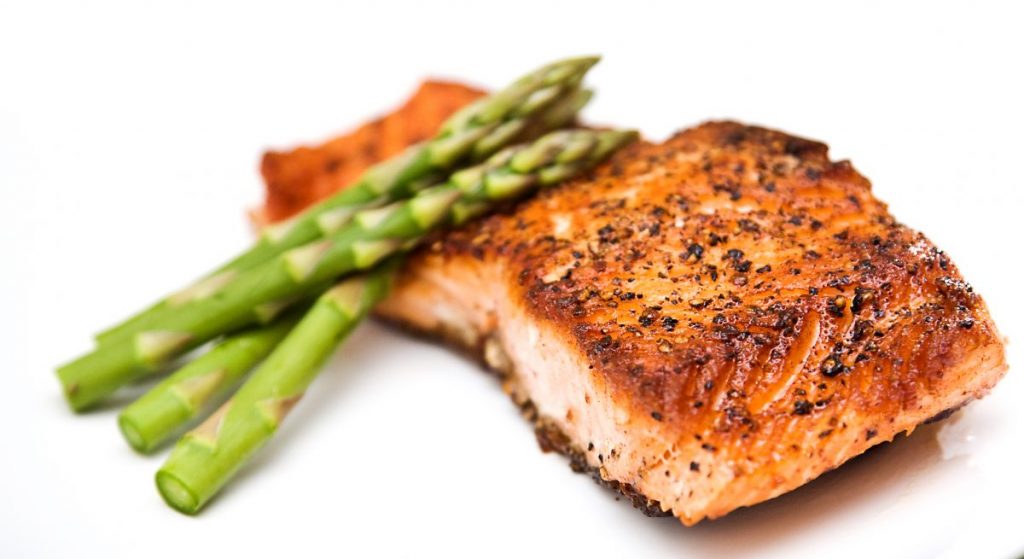 Combine two tablespoons each of olive oil, soy sauce, and lemon juice. Add lemon zest if you're using fresh lemon, about a teaspoon. Mince one clove of garlic and add it along with a bit of salt and black pepper. Mix with 1/4 cup of brown sugar to make the marinade. Refrigerate up to six 4-oz pieces of salmon flesh-down in the marinade in a shallow dish for about a half hour. Preheat the grill and cook as in the intro. 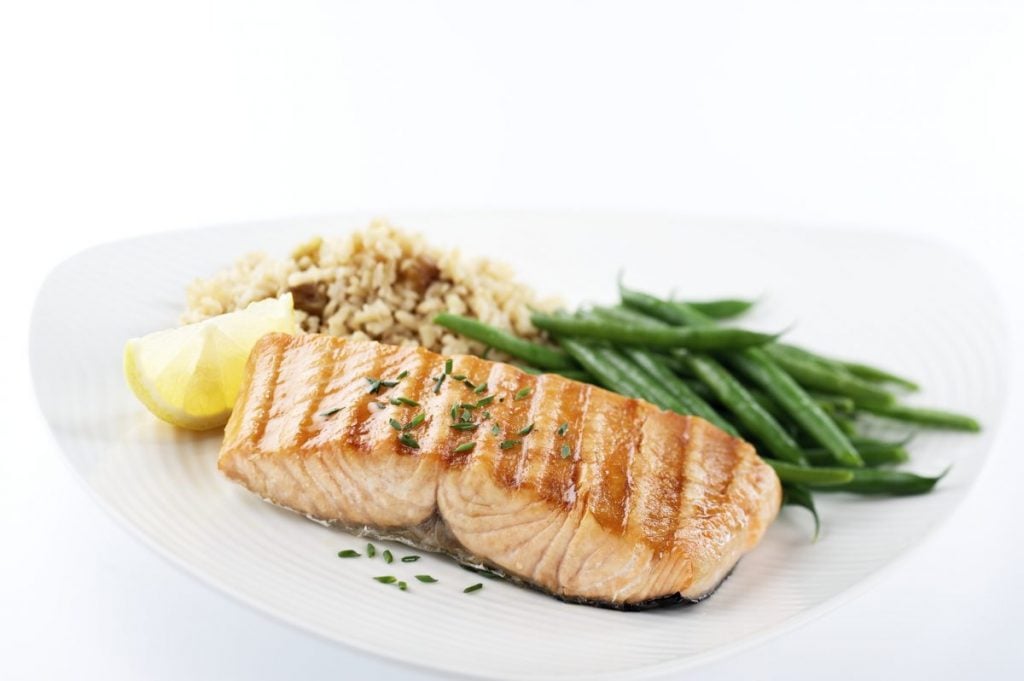 Cut thick rounds or chunks from a zucchini, bell pepper, and red onion. Slice a pound of salmon into kabobs. Place in a shallow dish and lightly sprinkle with salt and pepper. Prepare a marinade using 1/3 cup olive oil, two finely chopped cloves of garlic and two tablespoons lemon juice. Pour over the salmon and veggies, refrigerate for 15-30 minutes. Place the chunks on skewers - pairs keep the chunks from spinning-  and boil the remaining marinade for five minutes. Grill the skewers until the fish is done and veggies are tender, about 5-7 minutes on medium-high heat. Pour the sauce over and serve with rice. 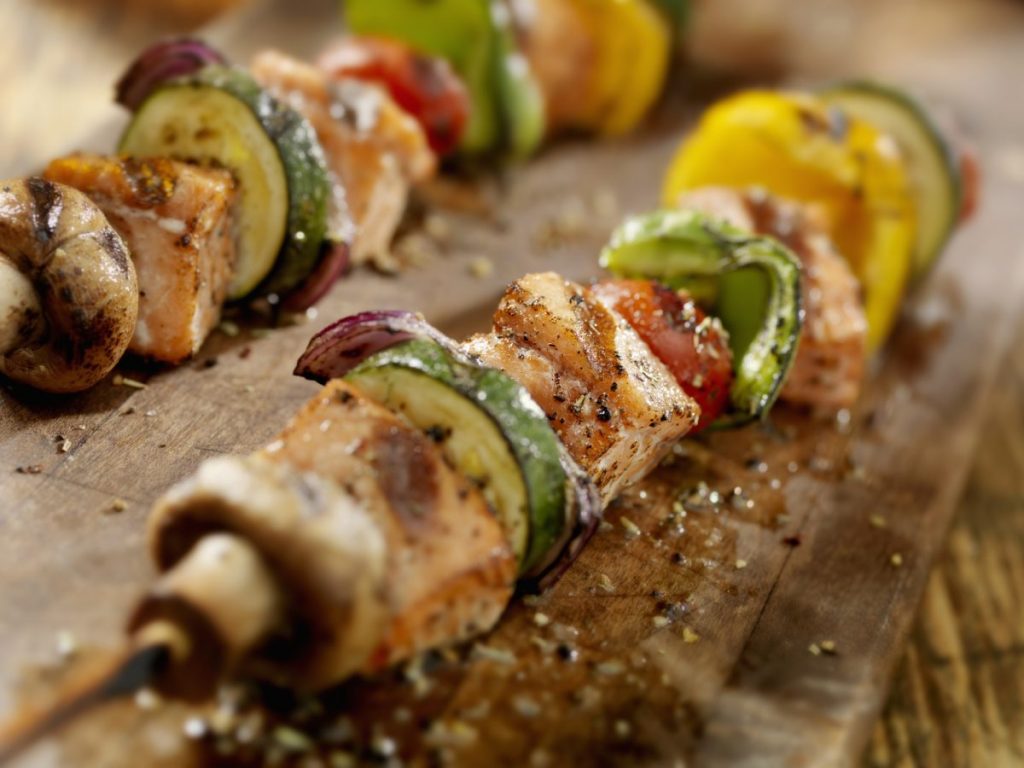 Salmon steaks cook similarly to filets but usually have more bones. Feel the surface and remove the pin bones, You can also de-bone the inner surface of the steak and create a filet mignon effect by trimming a bit and using natural fiber twine to gently tie the steak closed. 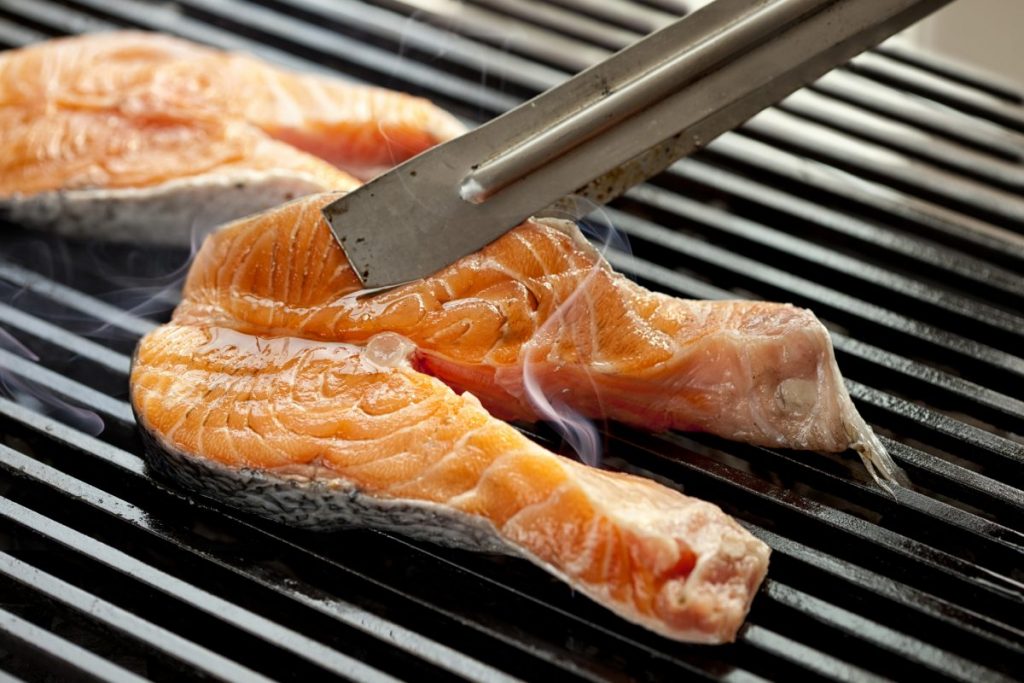 To add stronger flavors and visual appeal, you can slice an onion and separate the rings or make thin lemon slices, placing them on the salmon just before cooking. These go well with both sweet and savory recipes. And fish does flake, so a grill topper is great insurance to prevent food from dropping through the grill. 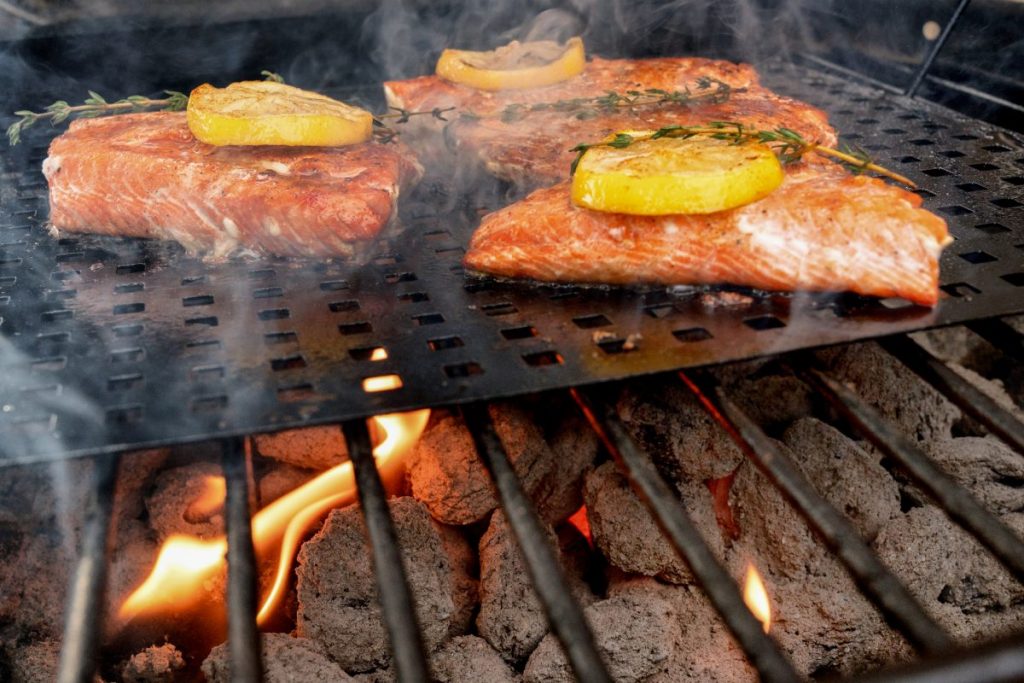 Use the cedar plank recipe and lemon slice secret to add smoke and emphasize the lemon. For a whole salmon piece, use a teaspoon each of fresh pepper and lemon zest and two teaspoons salt plus 1/4 cup minced dill and three minced garlic cloves. Mix with 3/8 cup olive oil and coat salmon with the mixture, then rub it in. Cook on prepared plank until salmon is turning opaque, 130 degrees F. Serve with lemon wedges if slices are not used. 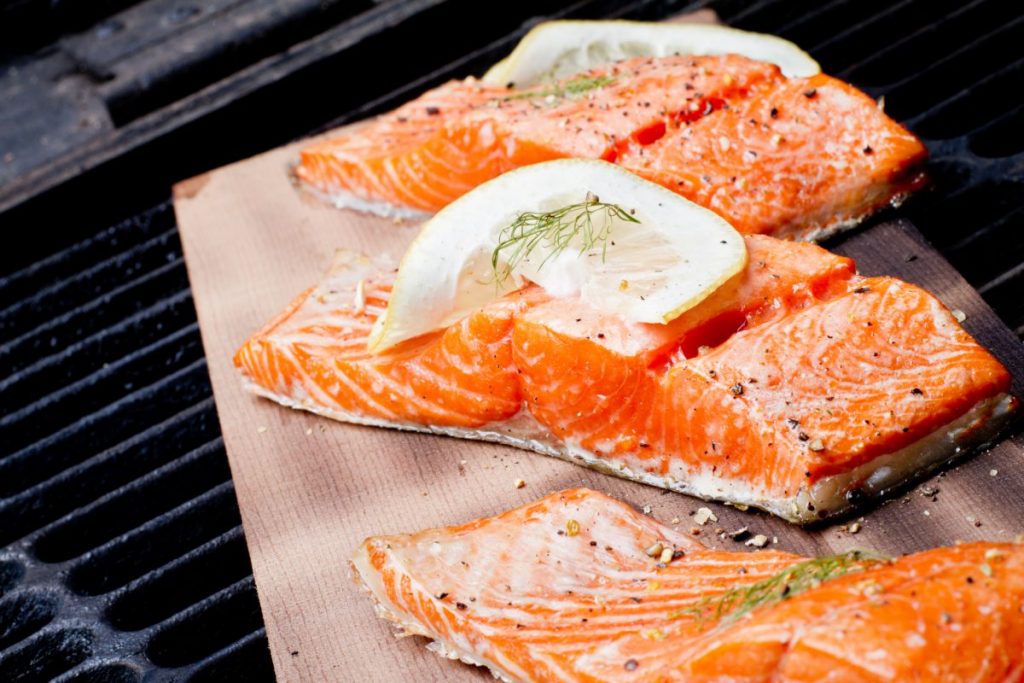