How to Get Rid of Maggots and Flies With Natural Solutions

They are little, squiggly worms that are both fascinating to some but disgusting to more. Maggots are the larval stage of the fly’s life cycle. When flies lay eggs, maggots hatch a day later. Females lay up to 2,000 eggs in their 30-day lifespan, and because these “babies” need to eat for about four or five days continuously, they are always found near or around rich food sources. There are plenty of ways to get rid of maggots and flies from many unexpected places.

Because maggots don’t appear by themselves, getting rid of them has to start with the source. Flies are attracted to everything, including discarded food, feces, and garbage. Don’t leave food open. This includes having an open kitchen garbage. Wrap food up before you toss it in the garbage and take it out to the master bin regularly. You can use insecticide spray in-between lining your cans to deter flies. In addition to cleaning their food dishes, make sure you discard pet droppings around your yard because that is a favorite food of flies. 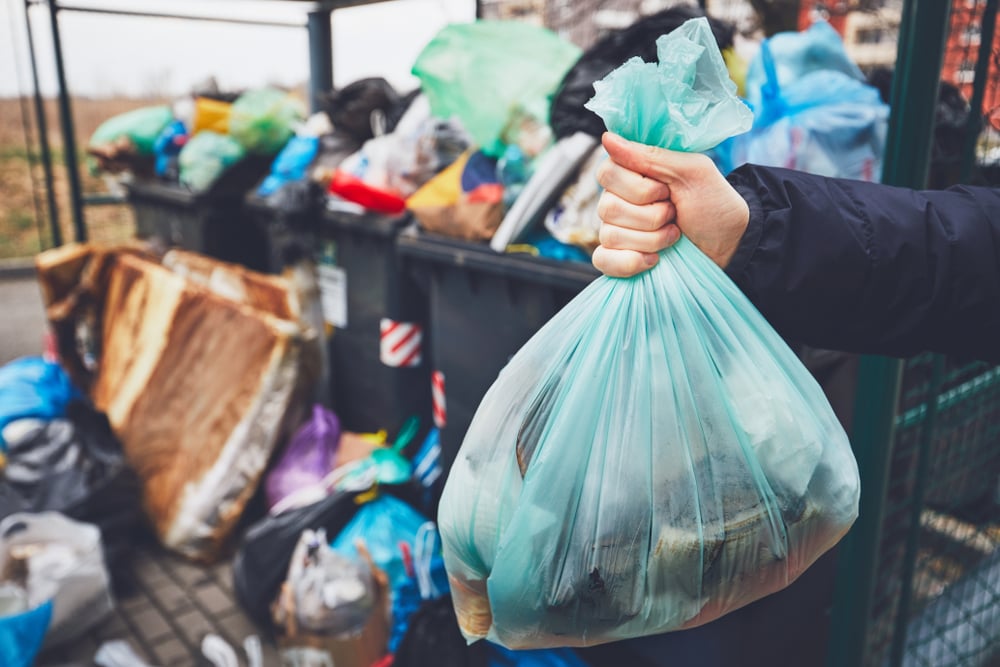 One quick way to get rid of maggots is to pour boiling water over them, but you need to be strategic. On trash day, get some boiling water ready and tip it in your trash can after pickup. The maggots will die instantly, but you need to clean them out afterward. What you can do is line your pickup container with heavy-duty trash bags that resist punctures or leaks. When smaller bags leak, they do so in the heavy-duty bags, leaving your bin clean on collection day. 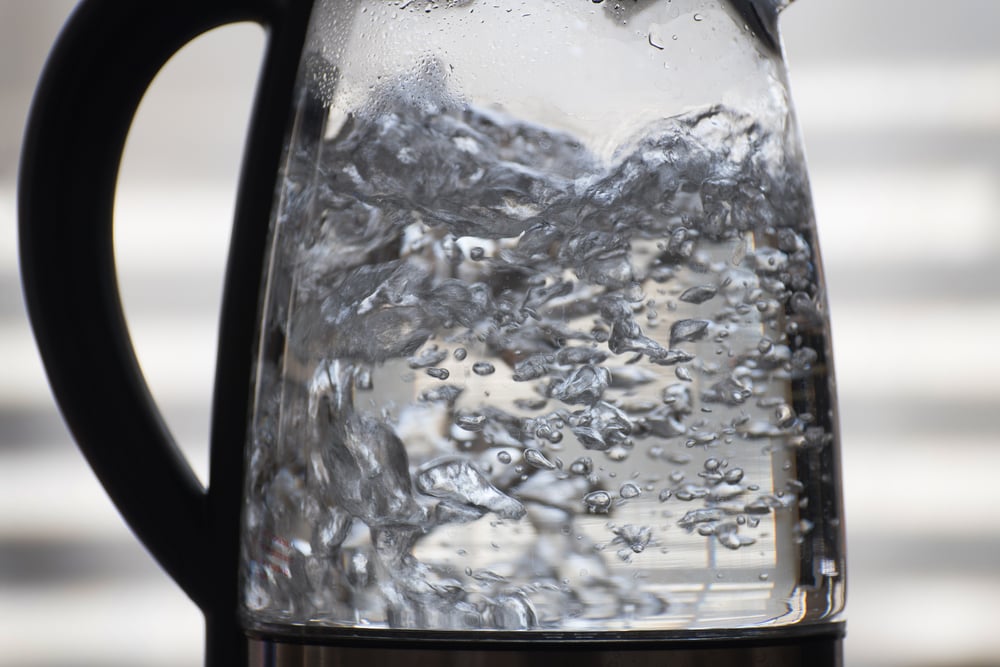 Diatomaceous Earth, D.E., is a naturally occurring silica formed from the fossilized remains of diatoms, which are hard-shelled biological organisms known as protists. It has many uses, including as pesticide, and, in food-grade form, it can even be ingested. D.E. is abrasive, so it can pierce the exoskeleton of many pests, but with maggots, it has a different effect. When you sprinkle this over them, they become dehydrated. Use it outside of the home, such as in the collection bin or your compost heap. 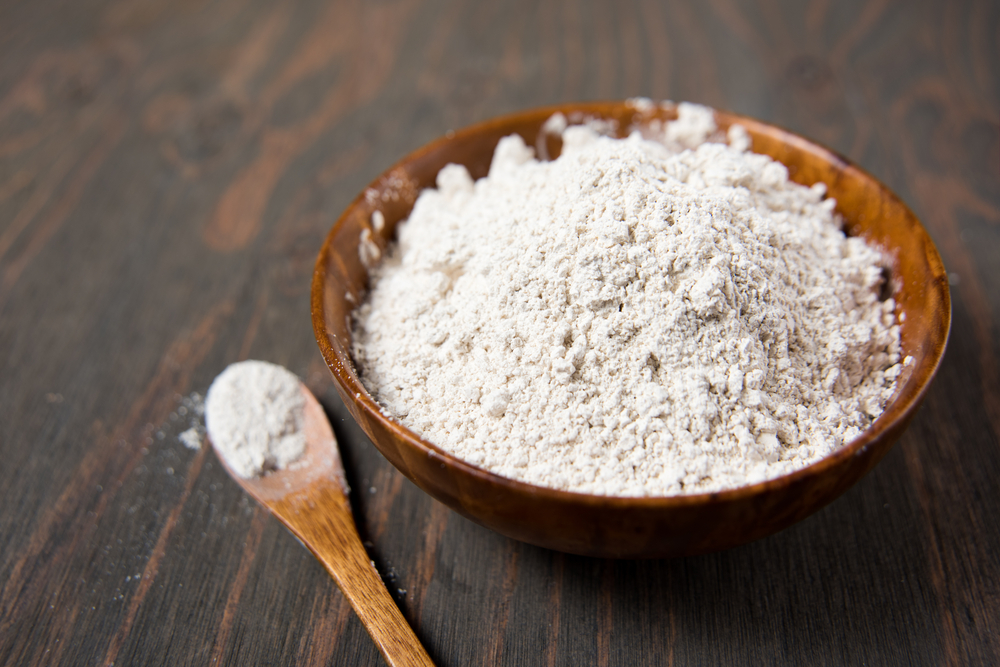 Maggots in the Drain

Many people don’t realize that maggots can infest drains, especially kitchen drains, by way of drain and fruit flies. Food particles accumulate, and flies find their way into the drain system to eat and lay. Despite the abundance of hot water from your pipe, it won’t affect the maggots. The best solution is to use a long-handled brush that breaks up any trapped debris in conjunction with a commercial drain cleaner as part of your regular drain cleaning maintenance routine. 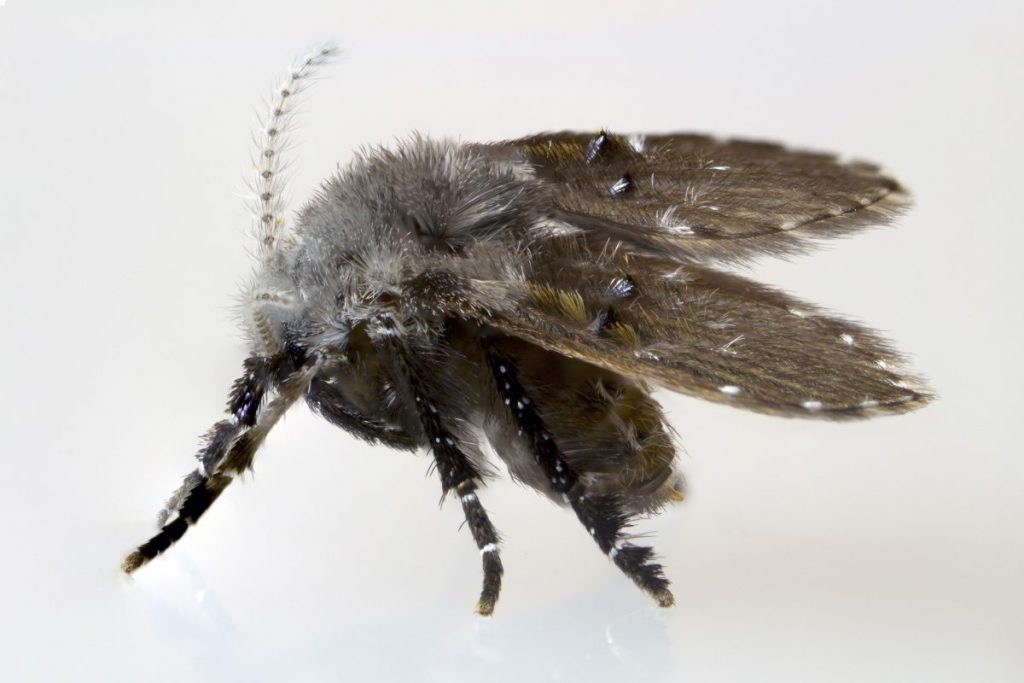 Fruits, vegetables, and spilled liquids can ferment in your carpet and provide a breeding ground for flies to lay eggs. If it gets bad enough, you may have to get rid of your carpet, but if it hasn’t reached that level, treat your carpet to a steam clean. It will take a few passes, but once the maggots are hit with steam, they die. Once done, you can vacuum the dead insects very easily. Make sure you toss the vacuum contents away immediately to prevent the infestation cycle from repeating itself. 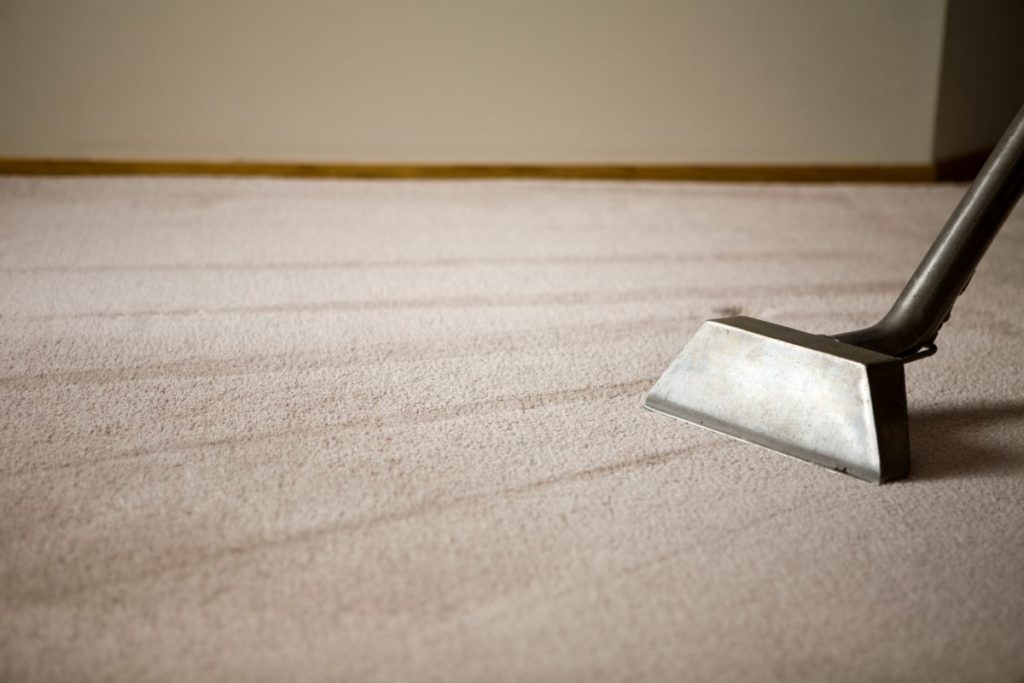 While getting rid of maggots is one part, finding ways to get rid of flies goes a long way to preventing maggot infestation. Luckily, there are few natural ways to ward off those and other unwanted pests. Camphor is a waxy solid with a powerful aroma derived from a large evergreen tree called the camphor laurel. It has been used in perfumes, embalming, and as an insect repellent. It was found to be an effective fumigant against red fire ants, and naturally repels roaches, mosquitoes, and flies. 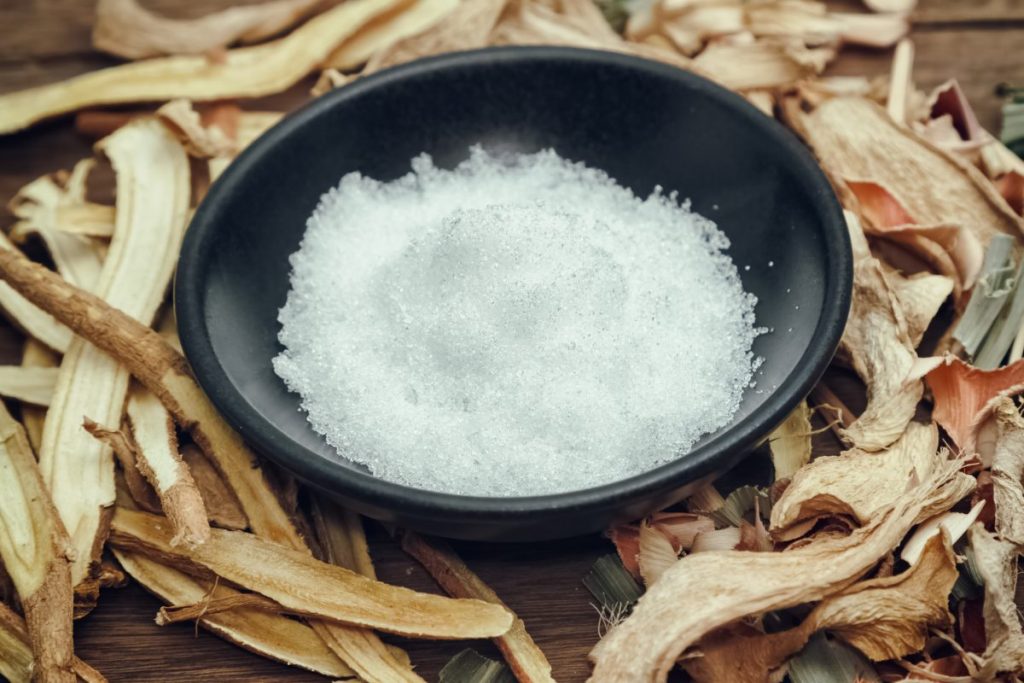 One of the few, if not the only, carnivorous plants in existence, the Venus flytrap is designed to naturally rid the world of insects. The plant secretes a nectar that attracts flies. When they land on the leaves, its tiny hairs trigger a reaction that shuts the leaves and traps the fly. They are sold between mid-spring and mid-autumn at hardware stores and large retailers. 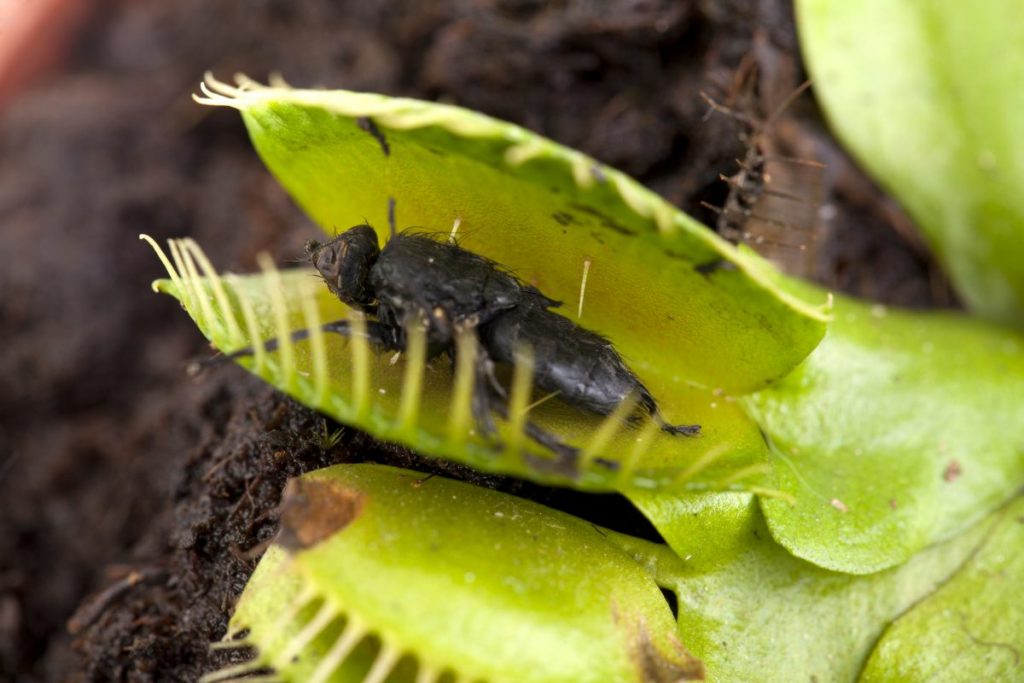 If you have pets and love plants, then this solution may be the best for you. Chrysanthemums and other members of the daisy or aster family contain a substance called pyrethrum. It naturally repels many insects, including fleas, ticks, and flies. Pyrethrum is a neurotoxin to insects, meaning it acts on their nervous systems, but is safe for use around animals. 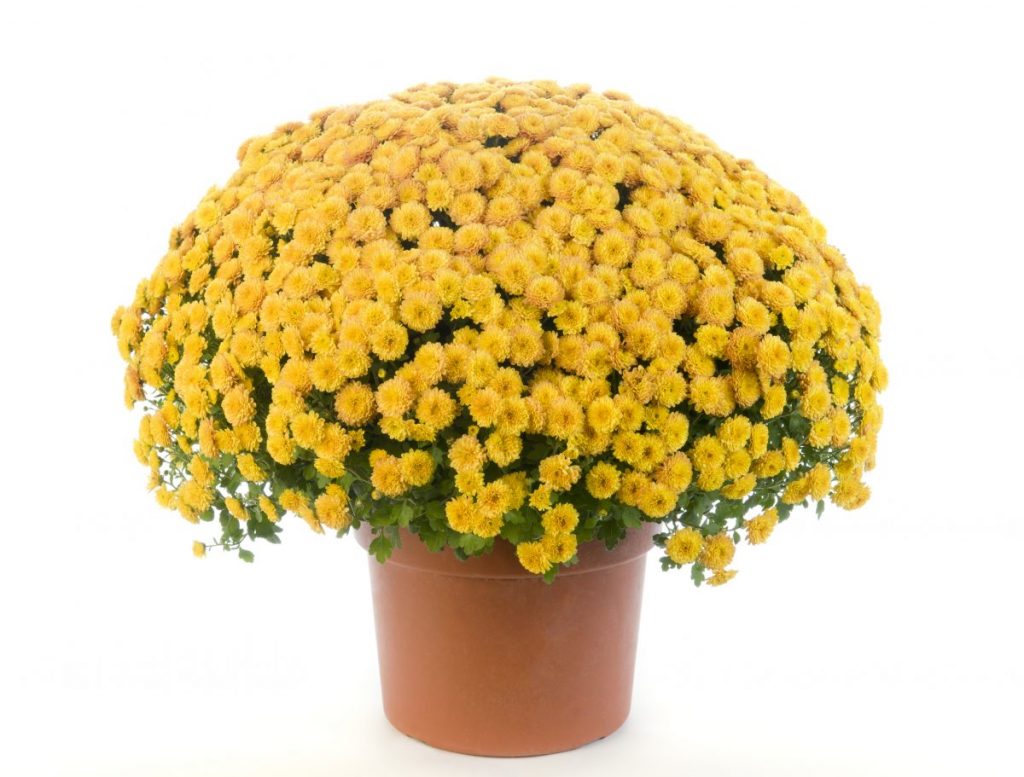 In addition to being called “kitty crack," catmint oil, commonly known as catnip, has been used in folk medicine for decades to ward off insects. Its active ingredient, nepetalactone, is more effective than commercial chemical solutions used to protect against mosquitoes that carry diseases, such as dengue and zika. Studies have also shown this bio-pesticide repels cockroaches and flies. 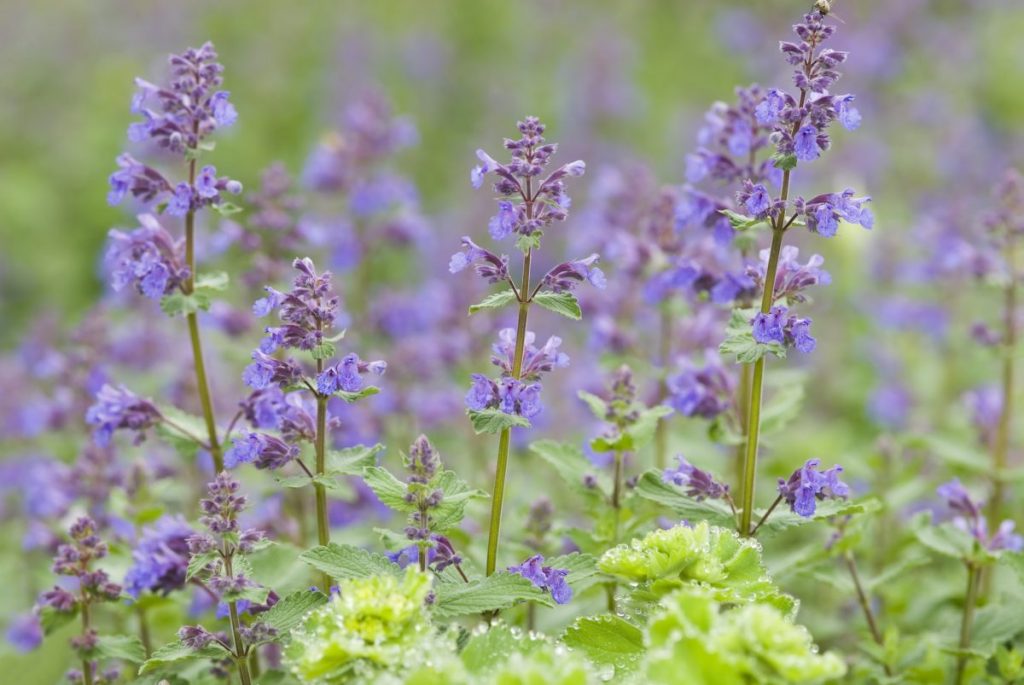 Making your own flypaper is easy. Cut up a lunch bag into six-inch strips, punch a hole in the top and tie a piece of yarn for hanging. Combine a quarter cup of corn syrup, a quarter cup of sugar, and two tablespoons of water in a bowl. Dip the strips in the sticky solution, coating both sides and hang them out to set for about four to 12 hours. Hang them wherever needed, and make more when necessary. 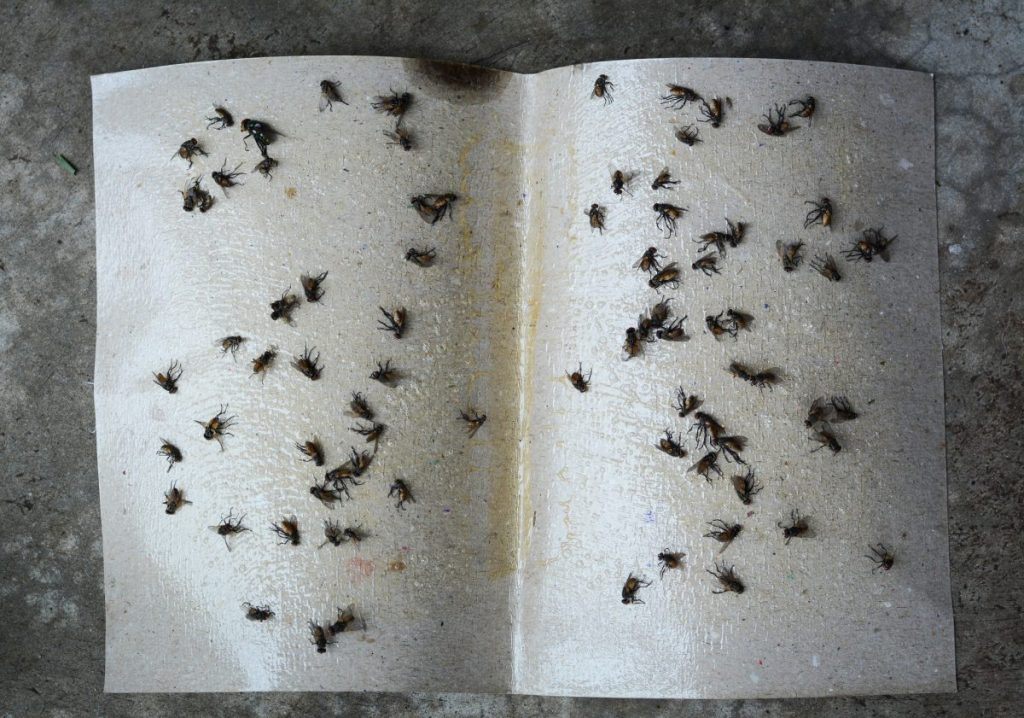