How to Get Creative With Pancake Recipes

Breakfast is the most important meal of the day. A healthy, filling breakfast provides energy for a full and productive day at work, school, or home. Depending on how you prepare them, pancakes can be a sweet or savory way to start your day. Different pancake recipes usually do not require much adjustment or substitution. Pancakes are a great way to experiment with new flavor and texture combinations. However, if you want to try some alternatives to all-purpose flour, give brown rice, oat, corn, sorghum, chestnut, or buckwheat flours a go.

Berry sauces are popular for many pancake recipes. This simple berry sauce recipe covers approximately 16 pancakes. Berries can be fresh or frozen, although fresh berries are recommended as a topping. Combine 1/2 cup each of blueberries, blackberries, and raspberries with 1 cup of sliced strawberries. Blend the berries into a puree, then use a mesh strainer to remove seeds. Pour the strained berries into a medium-sized saucepan with 2 Tbsp of honey, 1/2 tsp each of cinnamon and nutmeg, and 1 Tbsp of molasses or brown sugar. Bring the puree to a boil while stirring consistently. Remove the saucepan from the burner, and stir in a 1/4 cup each of blueberries, strawberries, blackberries, and raspberries. 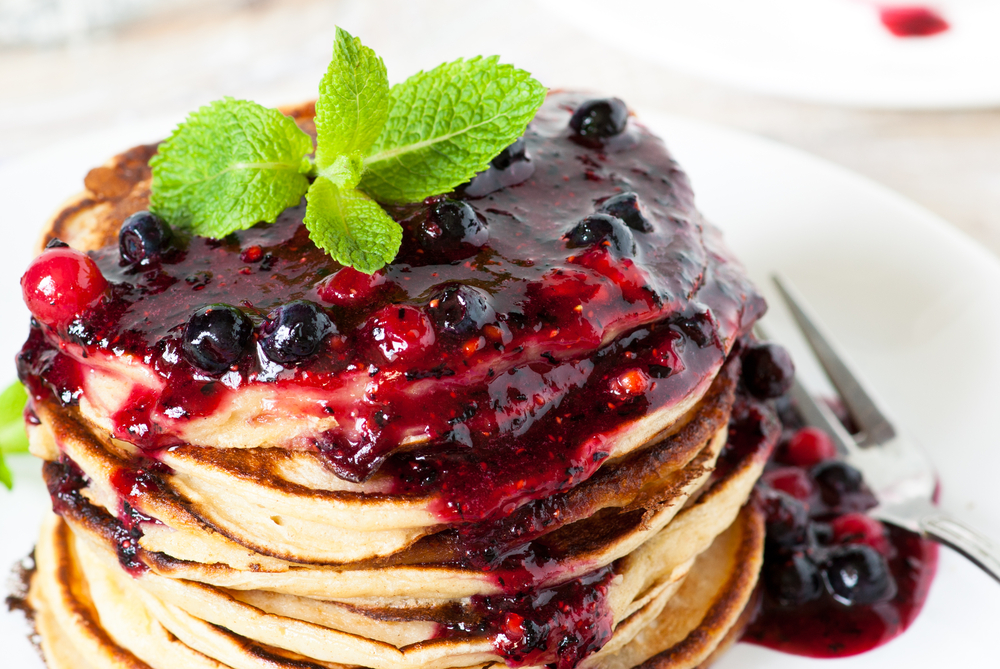 Combine 1 cup buckwheat flour, 2 Tbsp of brown sugar, 1 tsp of baking powder, 1/2 tsp of salt, and 1/8 tsp each of cinnamon and ground cloves in a large bowl. Mix 1 cup of buttermilk, 1 Tbsp of melted butter and maple or fruit syrup in another bowl. Whisk the moist ingredients into the dry ingredients until smooth. Preheat a griddle and coat it with melted butter. Pour the batter onto the griddle in 1/4 cup portions, and cook until both sides are golden brown. Serve topped with butter, syrup, whipped cream, or fruit. 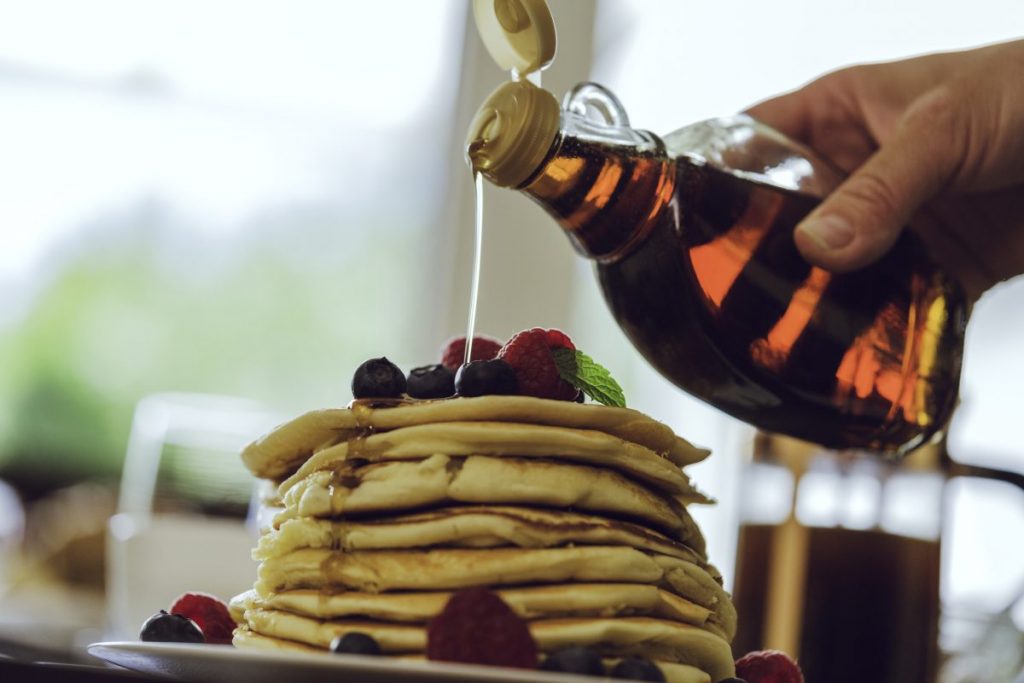 These single-serve pancakes are ideal for breakfast or brunch. Preheat the oven to 475 degrees f. Mix 1/4 cup of milk, 1/4 tsp of vanilla extract, and 1/2-tsp of lemon zest in a bowl. Whisk 1/4 cup of flour into the mixture until it is smooth. Coat a shallow saucepan, cast iron skillet, or an oven-safe ramekin with melted butter. Bake 1/4 cup batter portions for 10 minutes until each pancake is puffed and golden-brown. Serve with confectioners sugar, preserves, syrup, or fresh fruit. 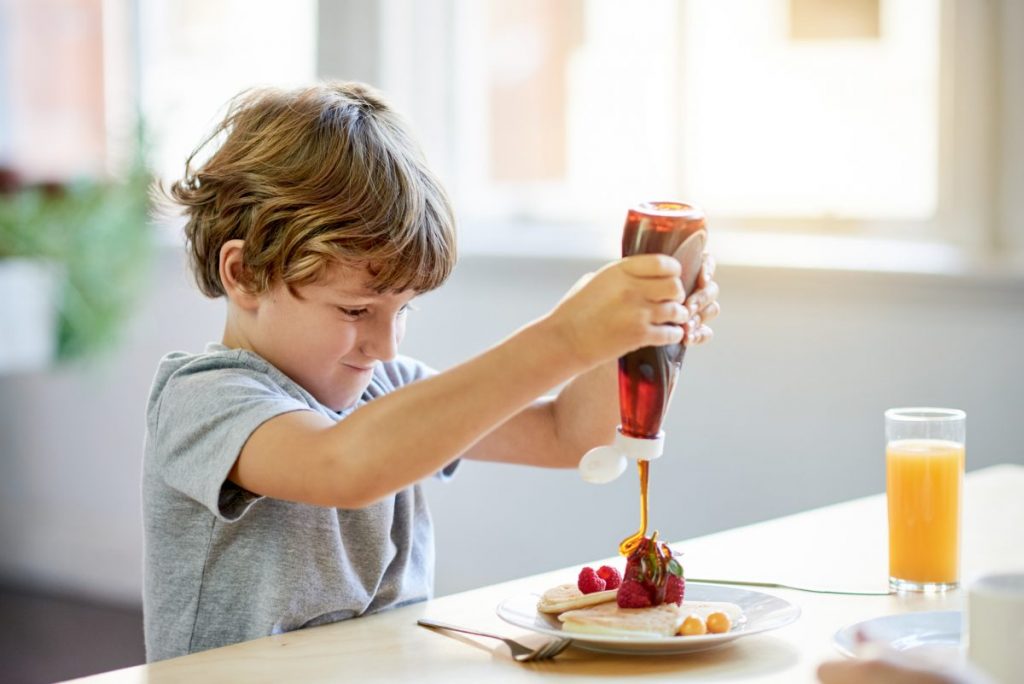 Mix 2 cups of oat flour, 2 tsp of baking powder, and a pinch of sea salt together in a large bowl. Combine 1 egg, 2 tbsp melted coconut oil, 1 tbsp of vanilla extract, and 1-cup of vanilla almond milk in a separate bowl. Whisk the wet and dry ingredients into a smooth consistency. Mix 1/2 cup of chocolate chips evenly throughout the batter. Let the batter sit for 30 minutes, then scoop 1/4 cup portions onto a greased, pre-heated griddle or skillet. Cover the griddle and cook on medium or high heat until bubbles form, then flip the pancakes. Serve with syrup or fruit preserves. 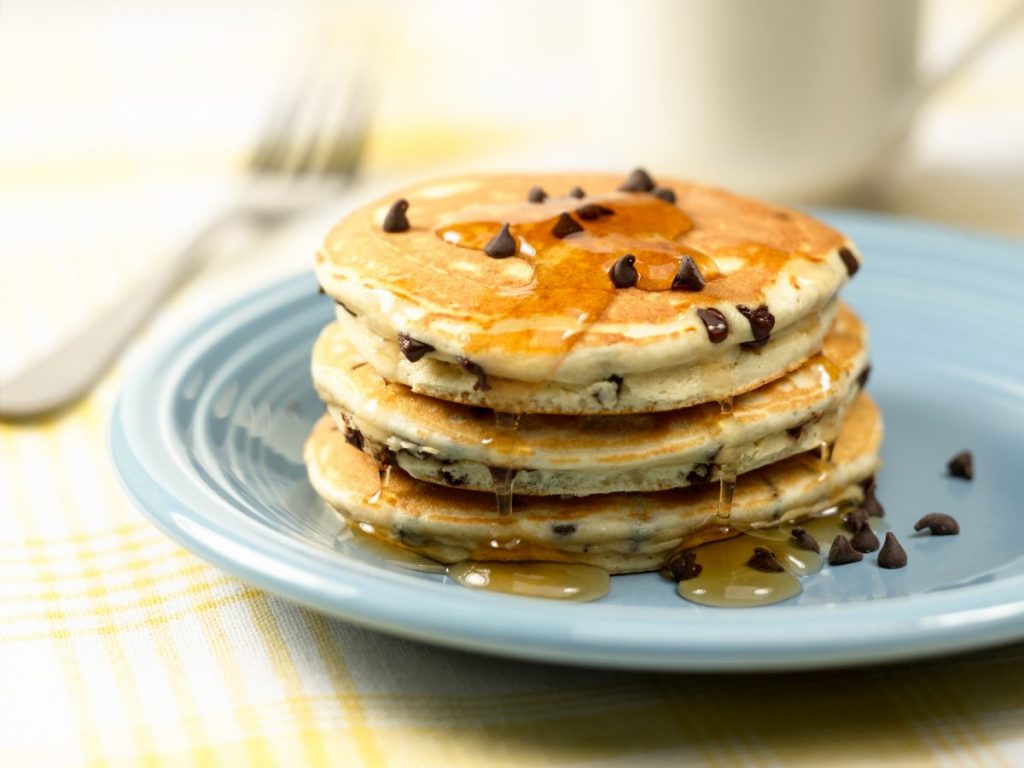 This sweet and filling almond flour recipe makes six pancakes. Combine 2 eggs, 1/2 cup of coconut milk, and 1 tsp of vanilla extract in a large bowl. Add 1.25 cups of almond flour, 1/4 tsp of baking soda, and a pinch of salt while whisking for a smooth batter. Coat a large nonstick skillet with coconut oil, and scoop the batter out in 1/4 cup portions. Cook over medium heat until bubbles appear and the edges are firm. Flip the pancakes and cook until they are golden brown. 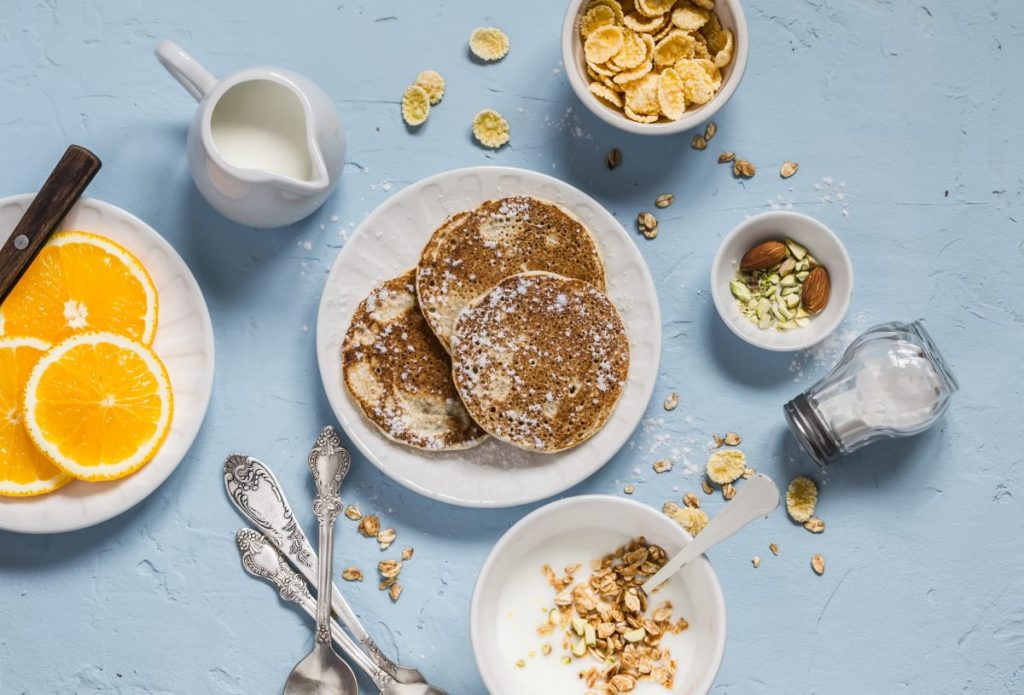 This delicious recipe produces 15 pancakes that turn breakfast into dessert. Crush 15 cream-filled chocolate cookies as finely as possible. Whisk 1-cup of flour, 2-tsp each of baking soda and baking powder, 1/2-tsp of salt, and the crushed cookies in a large bowl. Beat two eggs in a separate bowl, then mix in 2.5 cups of milk and 4 Tbsp of melted butter. Combine wet and dry ingredients and mix together until the batter is fairly smooth, but still has a slightly lumpy texture. The batter is best when stored in the refrigerator overnight, but it can be used after sitting for 30 minutes. Coat a skillet with butter over medium or high heat. Drop the batter into the skillet in 1/3 cup portions. The pancakes are done when they are golden brown with crisp edges. Top with more crushed cookies and whipped cream. 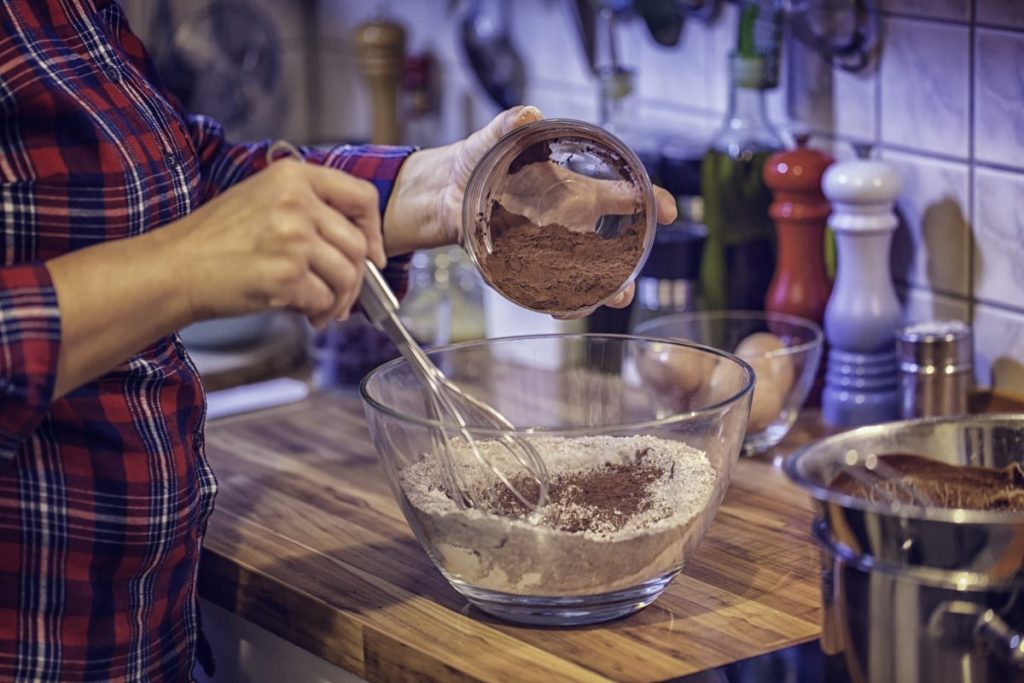 This vegan coconut pancake recipe can be prepared quickly. Mix 1/4 cup of flax meal and 1/2 cup of hot water in a large bowl. Let the flax mixture sit until it gels. Use a separate bowl to whisk 1/4 cup of arrowroot powder, 2/3 cup coconut flour, and 1.5 Tbsp baking powder. Stir 3 cups of coconut milk and 1/4-cup of olive oil into the flax gel, then stir in the dry ingredients. Coat a hot skillet with coconut oil, then pour 1/4 cup portions of the batter onto the skillet. Cook until bubbles form, then flip the pancakes and cook until they are golden brown on both sides. 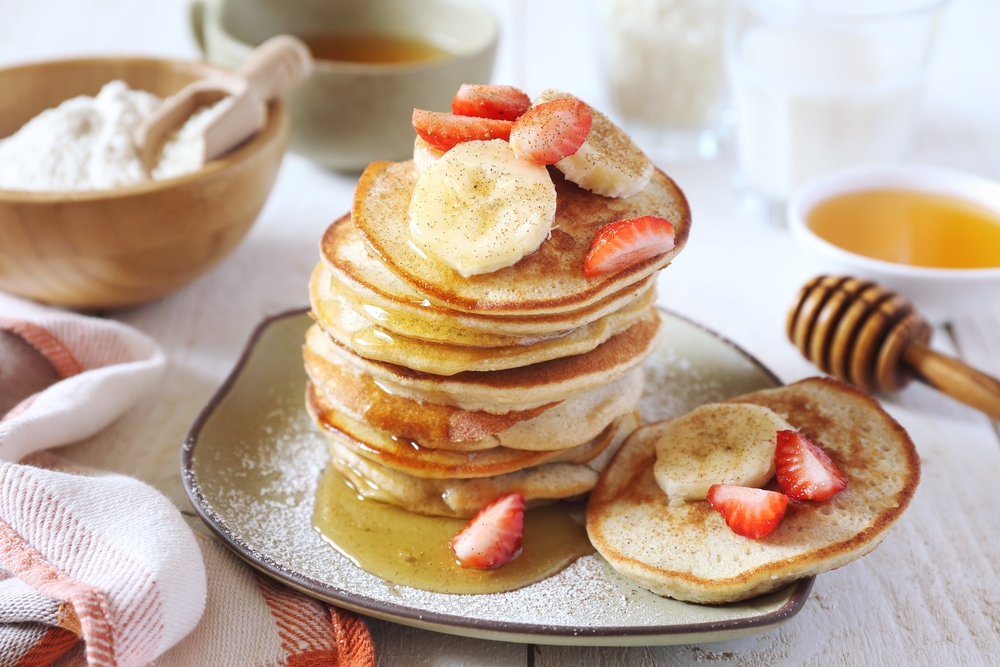 This recipe is full of protein. Mix 1/4 cup each of vanilla protein powder and flaxseed meal, 1/2 tsp of baking powder, 1/8 tsp of cinnamon, and 1/2 tsp of vanilla extract. Blend this mixture until it is smooth. Coat a hot skillet or griddle with coconut oil, then add the batter in 1/3 cup portions. Cook for 2-4 minutes, then serve the pancakes topped with maple syrup and pecans. 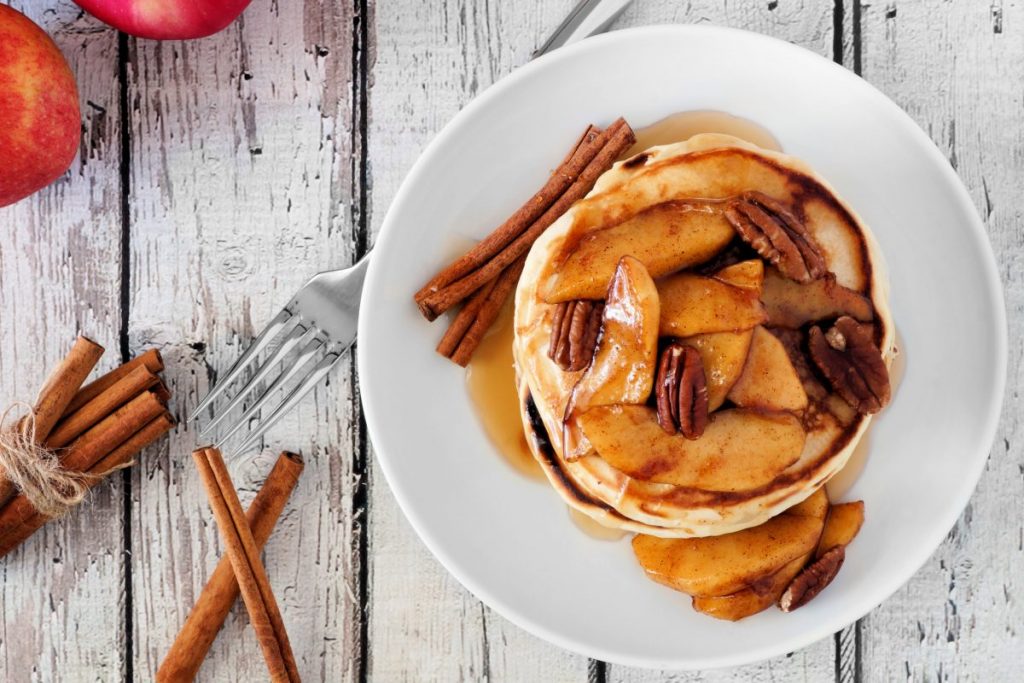 These salmon potato pancakes are perfect for lunch or an appetizer. Combine 1/2 cup of sour cream, 1/4 tsp of pepper, and 1 tsp of grated lemon rind in a mixing bowl. Cover the bowl and let it chill in the refrigerator. Mix 2 -cups of mashed potatoes, 6 Tbsp of flour, 1/2 tsp of baking powder, 2 eggs, and half of a small yellow onion in a separate bowl. Coat a heated skillet with olive oil over medium heat. Cook the potato mixture in 1.5 Tbsp portions for 2-3 minutes on each side. Top the cooked pancakes with the sour cream mixture and thinly sliced smoked salmon. Add chives as a garnish. 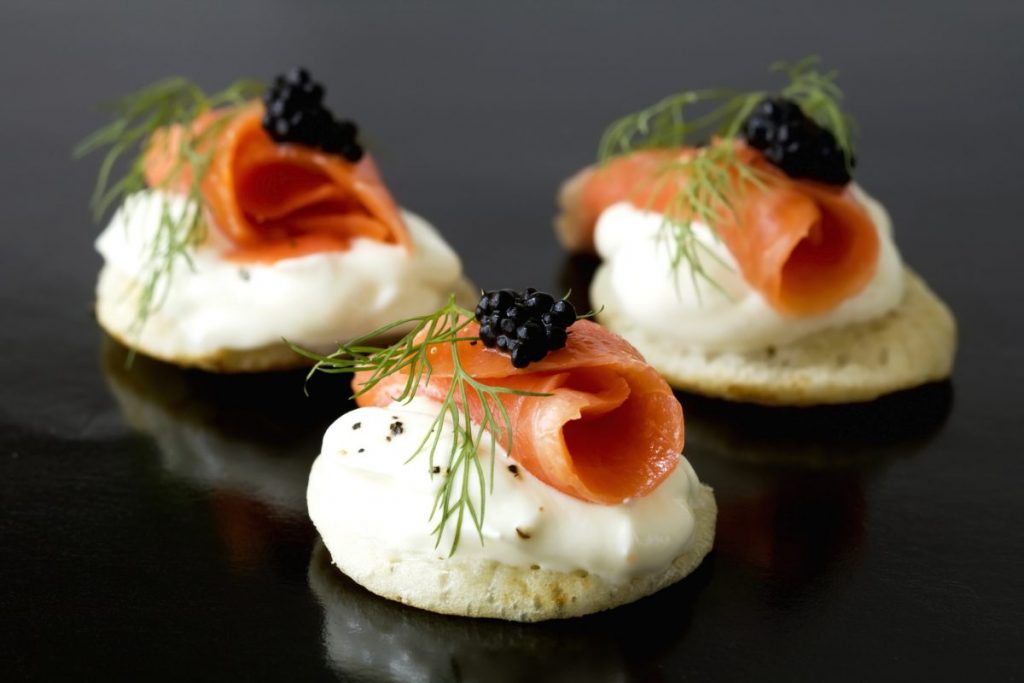 This quick and easy pancake recipe is perfect for busy mornings. Preheat the oven to 450 degrees f, then combine three eggs, 1/2 cup of milk, 3 Tbsp of melted butter, and 1/4 tsp each of salt and sugar in a large mixing bowl. Add 1/2 cup of flour slowly while whisking. Coat a 9-inch or 11-inch cast iron skillet with butter. Pour the batter into the skillet and bake for 12-18 minutes. The pancakes are ready when the edges are brown and slightly curled. Serve these fluffy pancakes with ice cream and berry sauce. 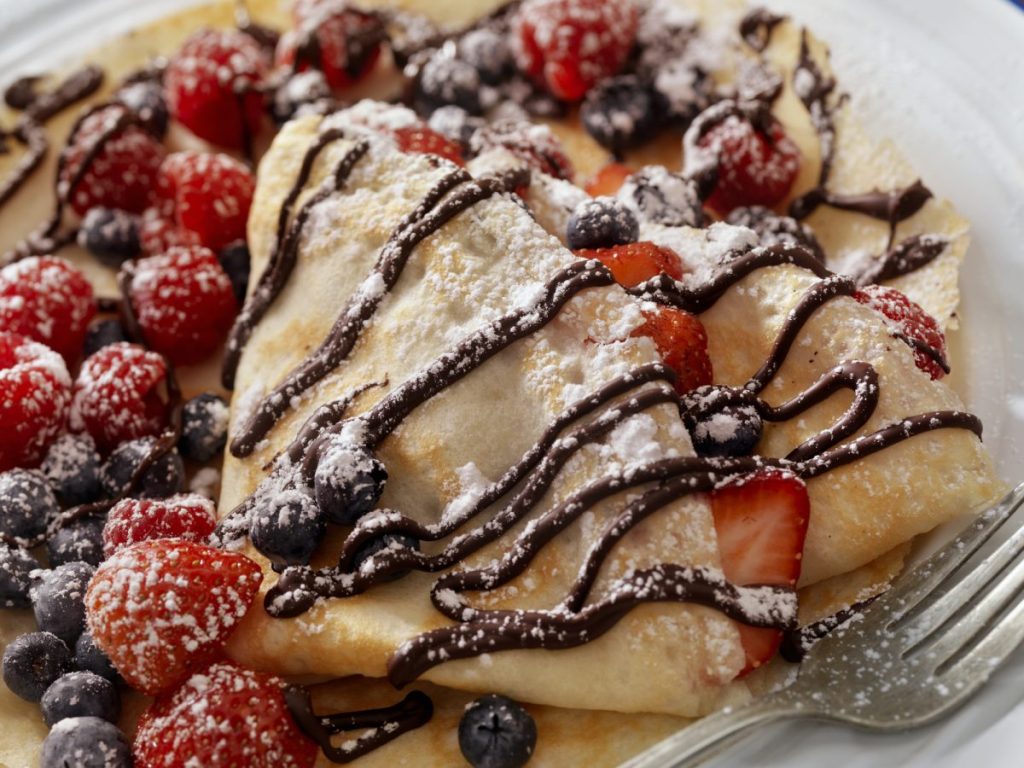