How to Cook With Pumpkin

Pumpkin is a thick-skinned squash that is usually yellow or orange but can also be white or pink. Typically, the pumpkins used in cooking or commercial products are different than those used for jack-o-lanterns.

Pumpkin was one of the first domesticated crops and has been a staple food in parts of the world since the beginning of agriculture. Pumpkins are full of nutrients, fiber, and flavor. Since it's a versatile ingredient, it can be included a wide variety of courses including desserts. Pumpkin puree is often a substitute for other ingredients.

Substitute for Butter or Oil

Pumpkin puree is often used in recipes as a substitute for butter or oil. It has fewer calories than other fats and contains additional nutrients. Multiply the amount of butter in a recipe by 3/4 to calculate the necessary amount of pumpkin puree. For example, one cup of butter can be replaced by a 3/4 cup of puree. Substituting pumpkin for oil is straightforward. One cup of oil is replaced with one cup of puree. 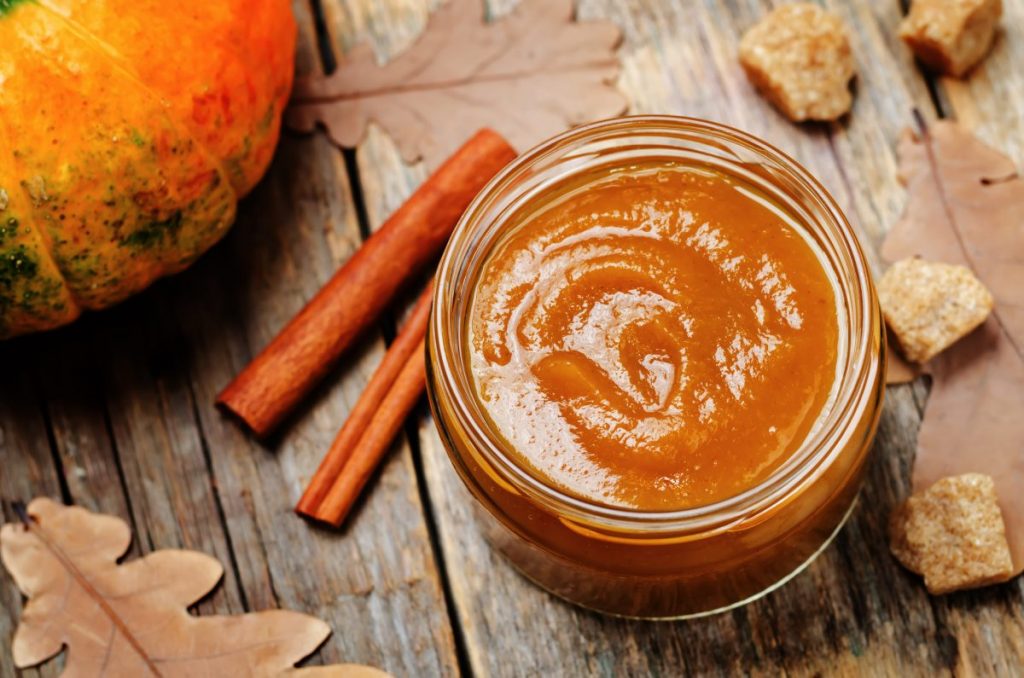 This simple pumpkin recipe explains how to make puree from fresh pumpkins. Select small pumpkins meant for pies and fillings. Cut the pumpkin in half, and remove the seeds and stringy material around them. Brush the flesh with butter or oil to enhance flavor. Wrap each half of the pumpkin in foil and bake at 325°F. Bake for approximately one hour then scrape the flesh out of the skin. Puree the pumpkin flesh in a blender, then use a strainer or sieve to remove any remaining stringy material. 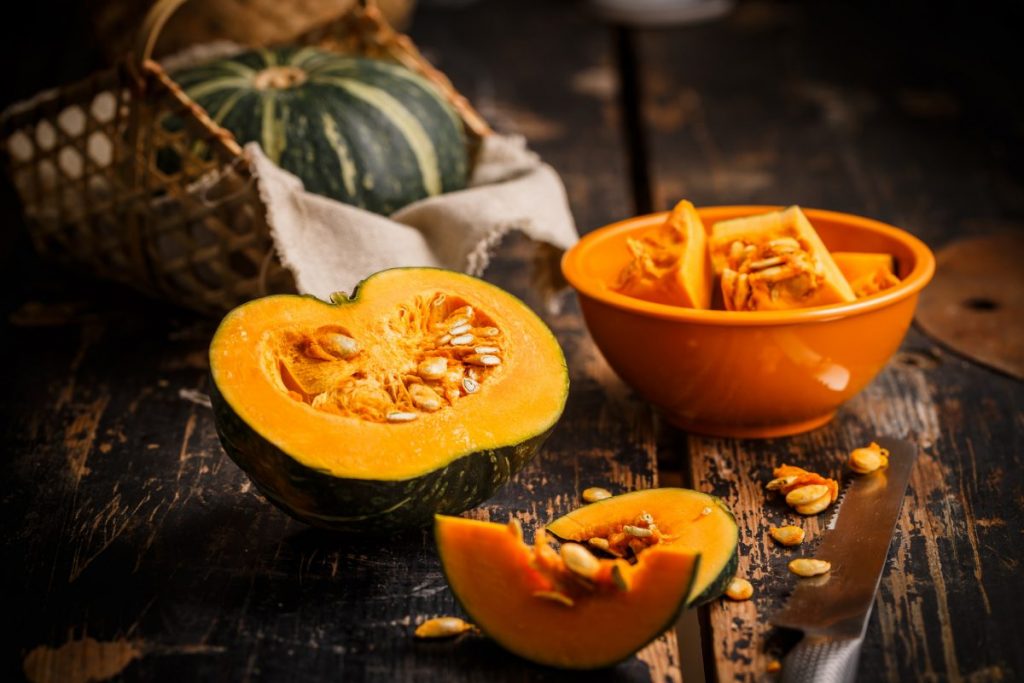 This simple pumpkin recipe produces a delicious puree that can be eaten alone, added to other foods, or used as a nutritious substitute ingredient in baking recipes. Peel and slice two carrots, then boil them in a saucepan with water and a pinch of salt. Simmer until carrots are tender, and add 1/2 cup of pumpkin puree. Continue cooking until the carrot and pumpkin mixture is very soft. Remove the saucepan from the burner. Pour the mixture into a blender with 1/2-tsp each of ginger, turmeric, salt, and black pepper. Blend until the mixture is one uniform color with no lumps, then add a small amount of olive oil for a smooth consistency. 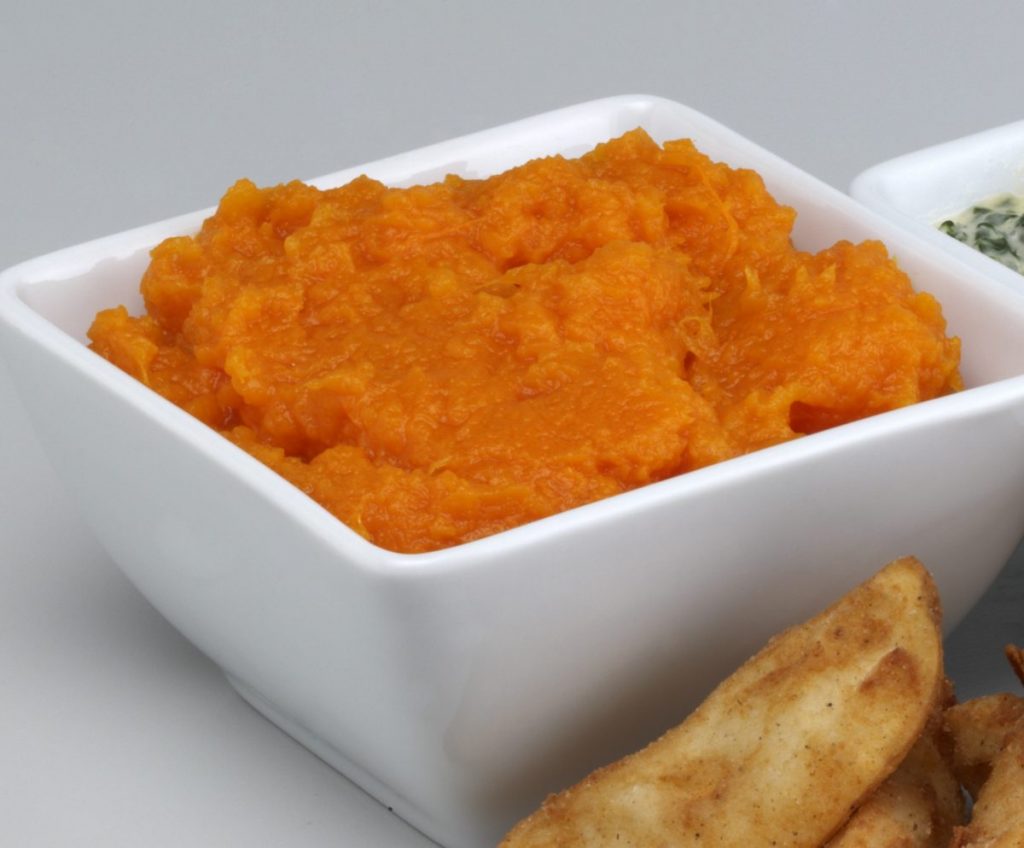 Preheat the oven to 375º F, and coat a muffin tin with butter. Combine 2 cups of flour, 1.5 tsp of baking powder, 1/2 tsp of salt, and 1.5 tsp of pumpkin pie spice in a large bowl. Use a separate bowl to mix 1.5-cups of brown sugar and 1/2 cup of softened butter, then stir in 2 eggs and 1 -cup of pumpkin puree. Pour the dry ingredients into the moist ingredients 1/2 cup at a time while stirring thoroughly. Add 1.5 -tsp of vanilla extract and 1 cup of 1 cup of buttermilk, then fill the muffin tins with batter. Bake for 25-30 minutes. 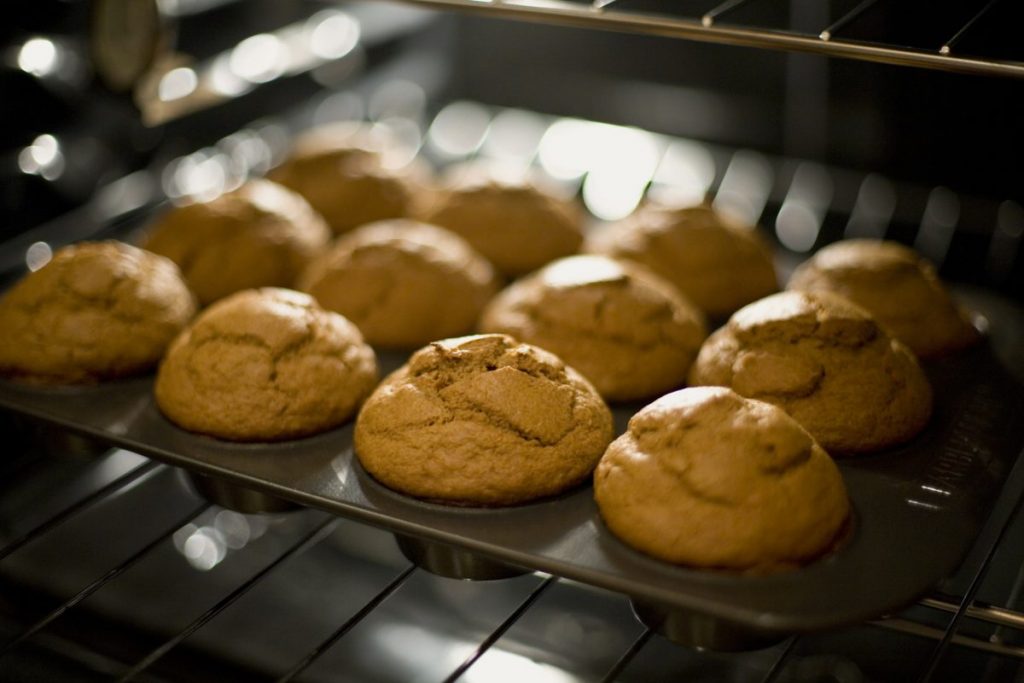 Cut 4 pounds of pumpkin flesh, approximately 2-3 small pumpkins, into 2 inch sections. Cover 2 baking pans with parchment, and preheat the oven to 475 F. Coat the pumpkin slices in 2 Tbsp of olive oil and a 1/2 tsp of salt, then arrange the slices in single layers on the baking pans. Bake for 20 minutes and turn the slices at least once at the halfway point. Heat a small frying pan over medium heat. Add 1/2 cup of pine nuts to the skillet to cook for approximately 3 minutes. Combine 1/4 cup of honey, 2 tsp of olive oil, and 2 Tbsp of balsamic vinegar for dressing. Place the baked pumpkin slices and a 1/2 cup of spinach in a large bowl for the salad base. Sprinkle the pine nuts over the spinach salad and drizzle with balsamic dressing. 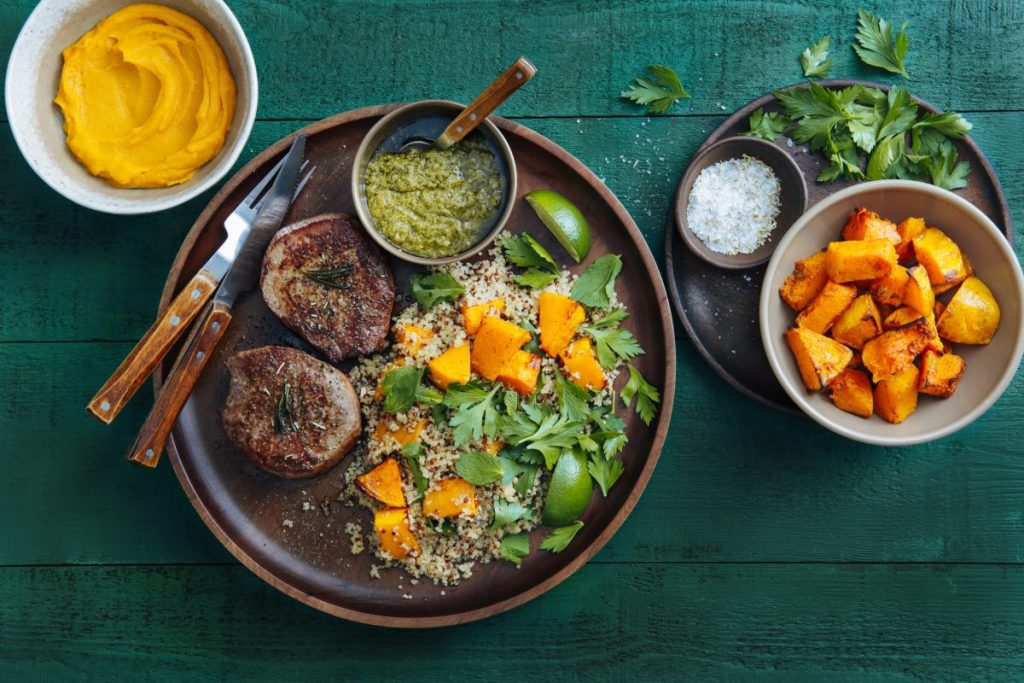 This pumpkin recipe for mashed potatoes makes a savory side dish for a dinner party or evening meal. Slice and peel 2  pounds of russet potatoes, and boil water in a large, covered saucepan. Boil the potatoes until they are tender, or approximately 20 minutes, then drain. Combine 2 Tbsp of melted butter and 4 ounces of softened cream cheese in a large mixing bowl. Place the hot potatoes over the cream cheese mixture, then add a 1/4 cup of milk. Use an electric mixer beginning on the low setting and gradually switch to the medium and high settings over 4-5 minutes. Stir in 1 cup of pumpkin puree and fresh thyme. Heat the mashed potatoes in a saucepan before serving. Garnish the plated potatoes with melted butter and thyme. 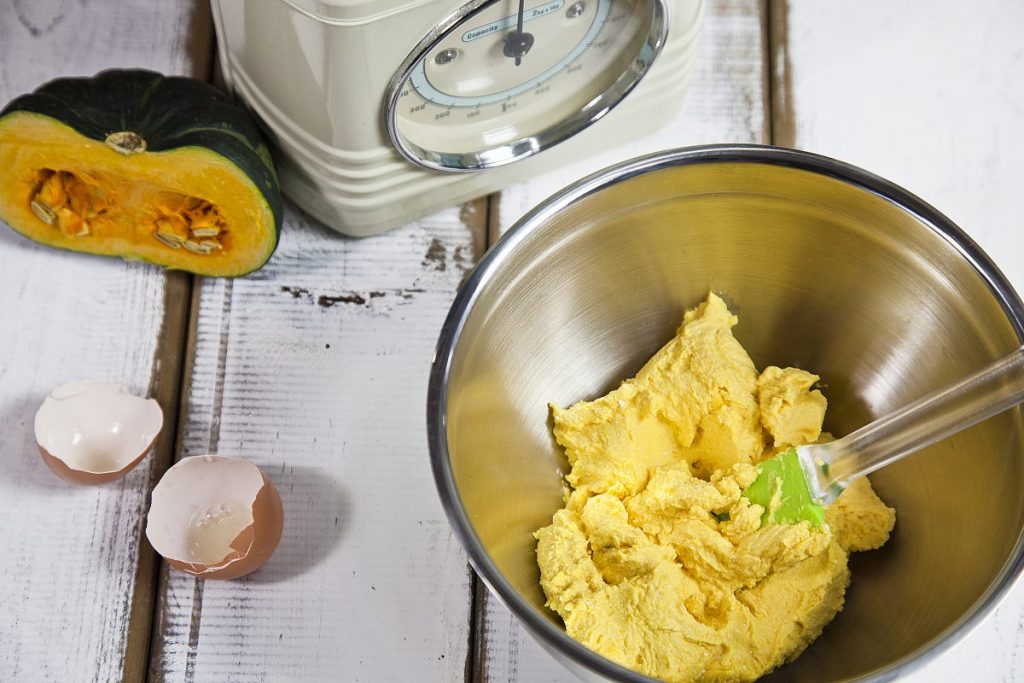 When you scoop out the seeds in preparation to bake the pumpkin, don't throw out the seeds! Pumpkin seeds are a delicious, crunchy, and healthy snack. This recipe is fast with very little preparation, perfect for unexpected guests or a busy evening. Preheat the over to 375 degrees F. combine 1/2 tsp each of garlic powder and salt, 1/4 tsp of cayenne powder, and 1/2 ounce of olive oil in a mixing bowl. Pour 1 cup of rinsed and dried pumpkin seeds into the bowl. Make sure seeds are thoroughly coated and spread them evenly over a parchment-cover baking sheet. Bake for 15-20 minutes, tossing the seeds at least once while baking. 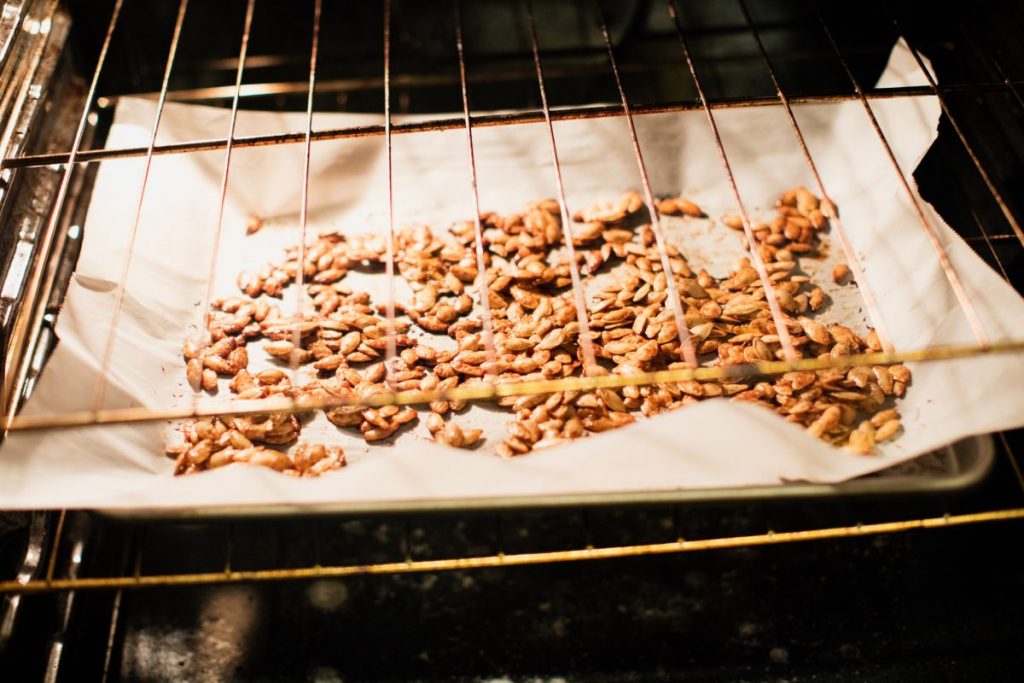 This pumpkin recipe for polenta makes a savory side dish or base for other dishes. Boil 2.5 cups of milk and 2 cups of water in a saucepan over medium heat. Stir 1 cup of cornmeal into the saucepan, then remove the pan from the burner. Add 2 Tbsp of cream cheese, 1/2 tsp of pumpkin pie spice, 1/8 cup of Parmesan cheese, and a dash of salt and pepper. Stir the mixture until it is smooth. Pour it into a loaf pan, and cut into slices after the mixture sets. 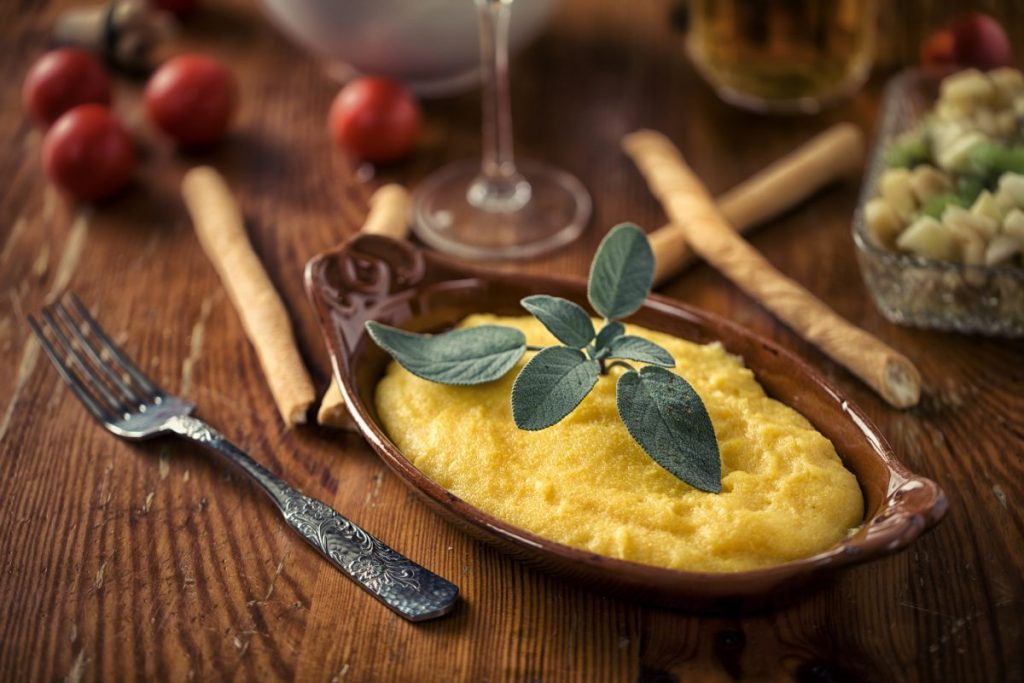 Pumpkin energy bites are a quick and convenient snack. Use a blender or food processor to thoroughly mix 1/2 cup of old-fashioned oats, 1/4 cup of chopped pecans, 1/4 cup of almond butter, 2 Tbsp of maple syrup, 1/4 cup of pumpkin puree, 1 tsp of vanilla extract, and 1 tsp each of cinnamon and nutmeg. Pour the blended mixture in a large mixing bowl, then stir in 1/2 cup of oats and 1/4 cup of chocolate chips. Roll the combined mixture into balls and refrigerate for at least an hour before serving. 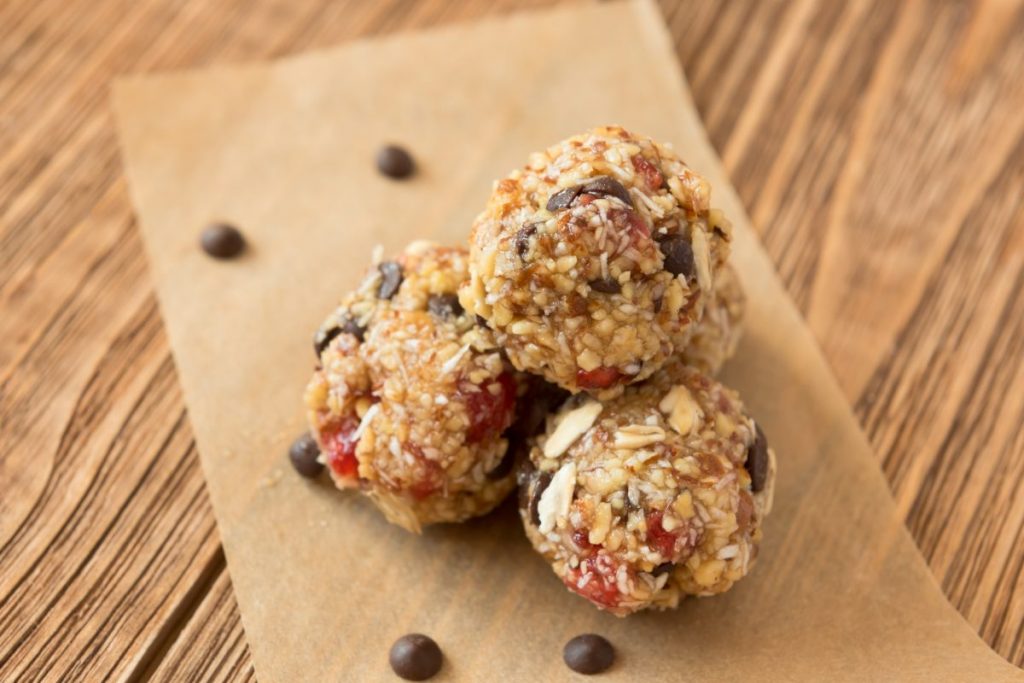 This roasted pumpkin recipe is ideal for a quick side dish. Select one small pumpkin or use a quarter of a large pumpkin. Preheat the oven to 400 °F. Scoop the seeds and insides out of the pumpkin with a metal scoop. Set the seeds aside for roasting. Cut the pumpkin into 1 inch thick slices, then place the slices on a baking sheet. Drizzle the slices on both sides with 2 Tbsp of olive oil and sprinkle with 1 tsp of cinnamon, 1/8 tsp of nutmeg, 2 Tbsp of brown sugar, and 2 tsp of sea salt. Bake the pumpkin slices for 18-20 minutes. 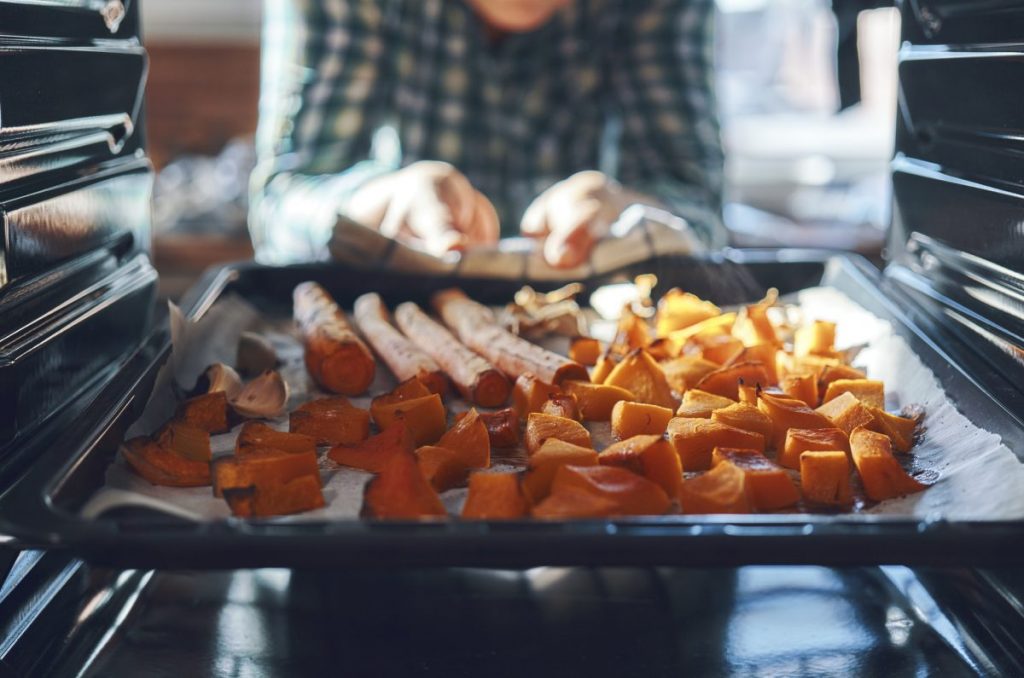