How to Cook Shrimp

Shrimp are tiny crustaceans loved around the world for their mouth-watering taste. The first step in learning how to cook shrimp is deciding which type of shrimp to bring home from the grocery store. Shrimp and prawn are not the same, although the terms are often used interchangeably in restaurants.

Shrimp live in both fresh and salt water, while prawns are strictly freshwater. Many species of 'shrimp' sold in grocery stores are actually prawns, although they are usually cooked in the same manner. Prawns do not have the signature curved shape of shrimp.

The immense popularity of shrimp has contributed to problems with sustainability. Those who are concerned with sustainability, or prefer careful purchasing might consider purchasing ocean safe seafood. Purchasing seafood from a local source is also a great option for those who like to know where there food is coming from. 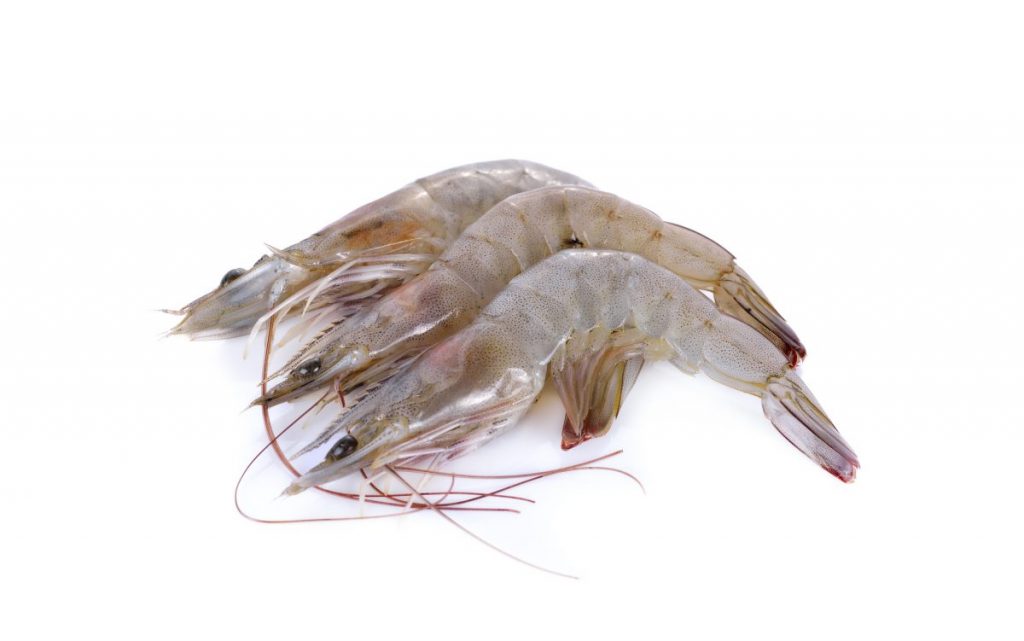 Buying frozen shrimp is usually the best choice for those of us who do not live along the coast. Frozen shrimp are thrown on ice immediately after they are pulled onto the boat. They stay frozen until they reach the grocery freezer section and arrive at our homes to be cooked. 'Fresh' shrimp were usually frozen immediately too, but they are thawed to be set out on ice for consumers. Avoid shrimp that feels mushy or has an odor similar to ammonia. 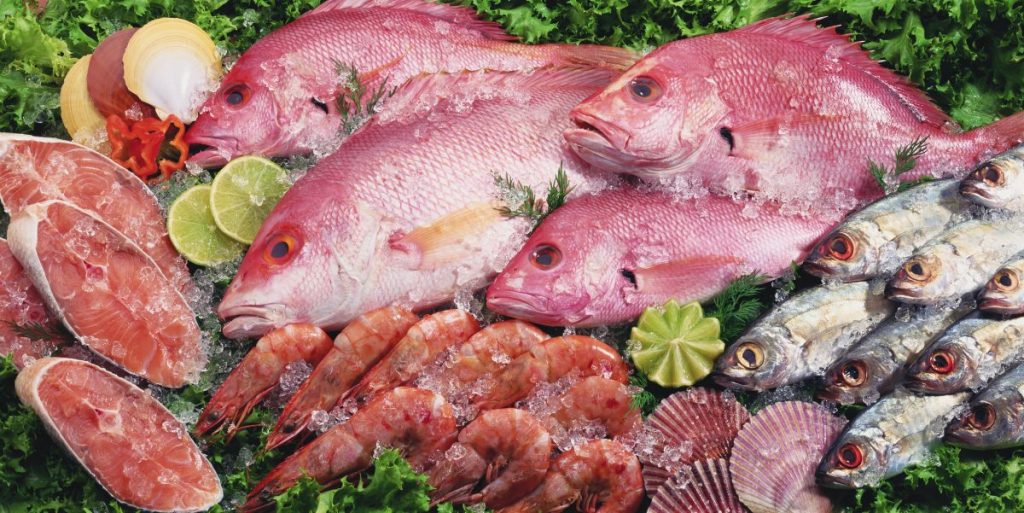 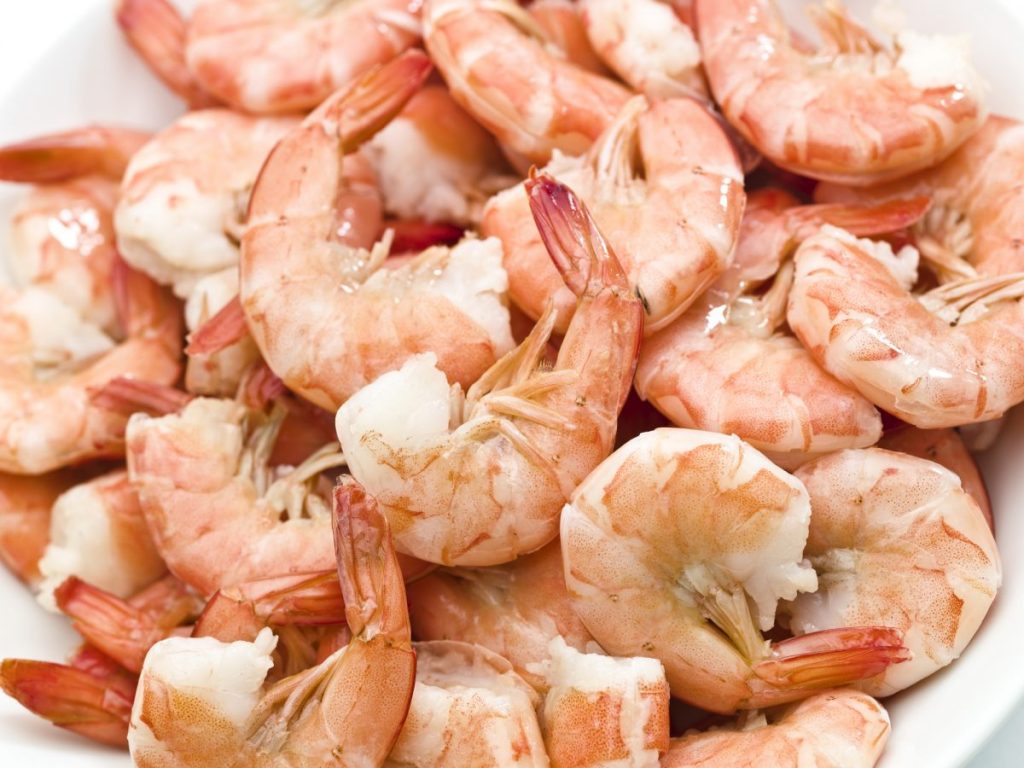 Sauteing is one of the most popular ways to cook shrimp. Purchasing deveined and peeled shrimp prevents time-consuming preparation. Fresh or frozen shrimp is fine, as long as frozen shrimp is completely thawed before cooking. Melt butter and olive oil in a large skillet. Add garlic, onion, wine, or other ingredients, but wait until the shrimp is cooked to add dry seasonings. Shrimp turn pink and have a slight curve when they are finished. Shrimp curled up on itself is overcooked. It usually takes 3-5 minutes to saute shrimp. 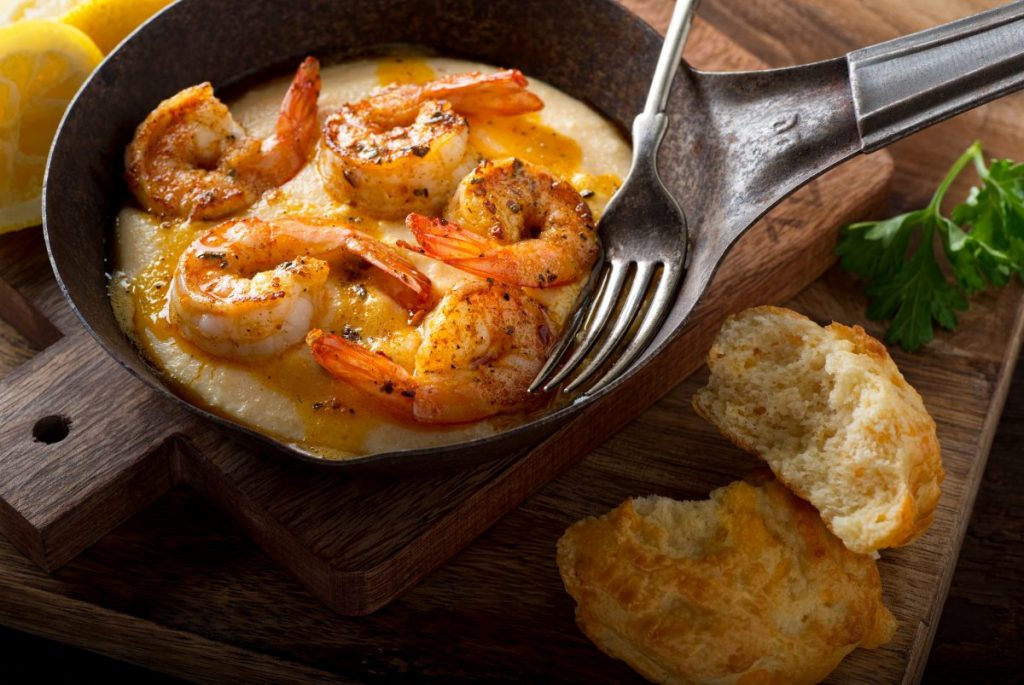 Boiling shrimp is a bit of a misnomer. Water boils at 212°F, but that is too hot for the shrimp. Start with cool water, and heat the water and shrimp together. Use a food thermometer to track the water temperature, and pull the pot off the heat when the water reaches 170°F. Drain the hot water, and rinse shrimp quickly with cold water. The cold water stops the cooking process so shrimp are plump and firm. 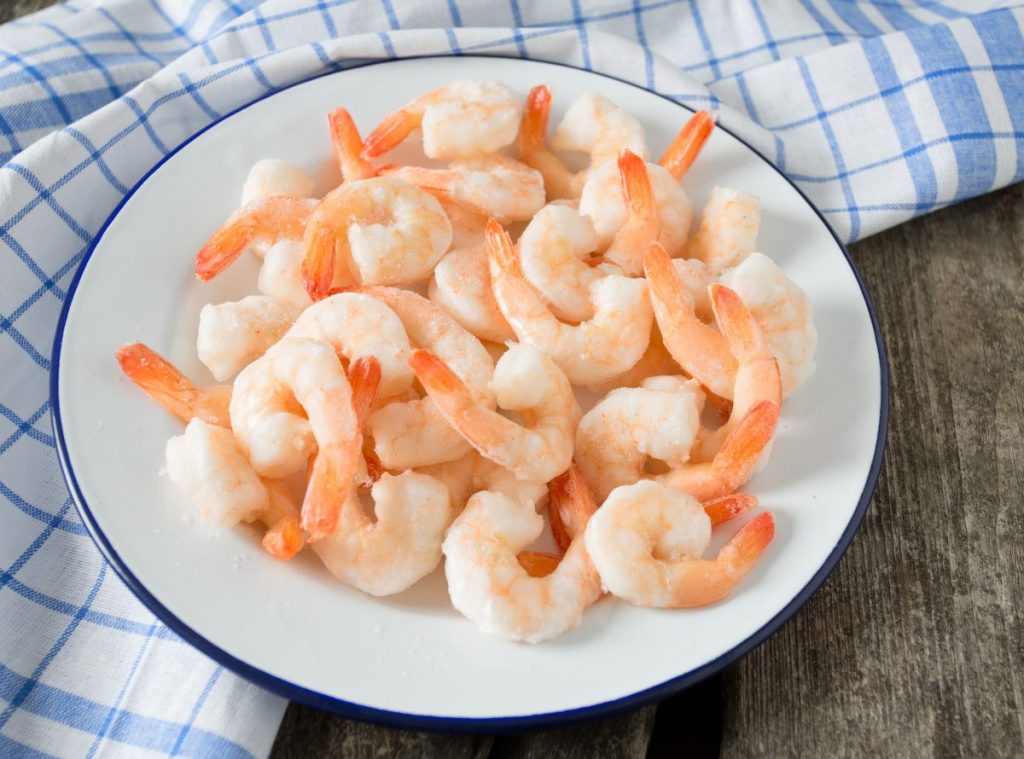 Learning how to make shrimp on a grill reduces the risk of overcooking involved with other methods. Large shrimp still in their shells are best for grilling, and skewers are a fun and easy way to cook and eat shrimp. Light the grill and let it heat up while seasoning the shrimp with olive oil, salt, pepper, and garlic. Place the skewered shrimp on the hot grill. Let each side cook for only a minute or two. The shrimp are done when the shells turn pink over opaque flesh. 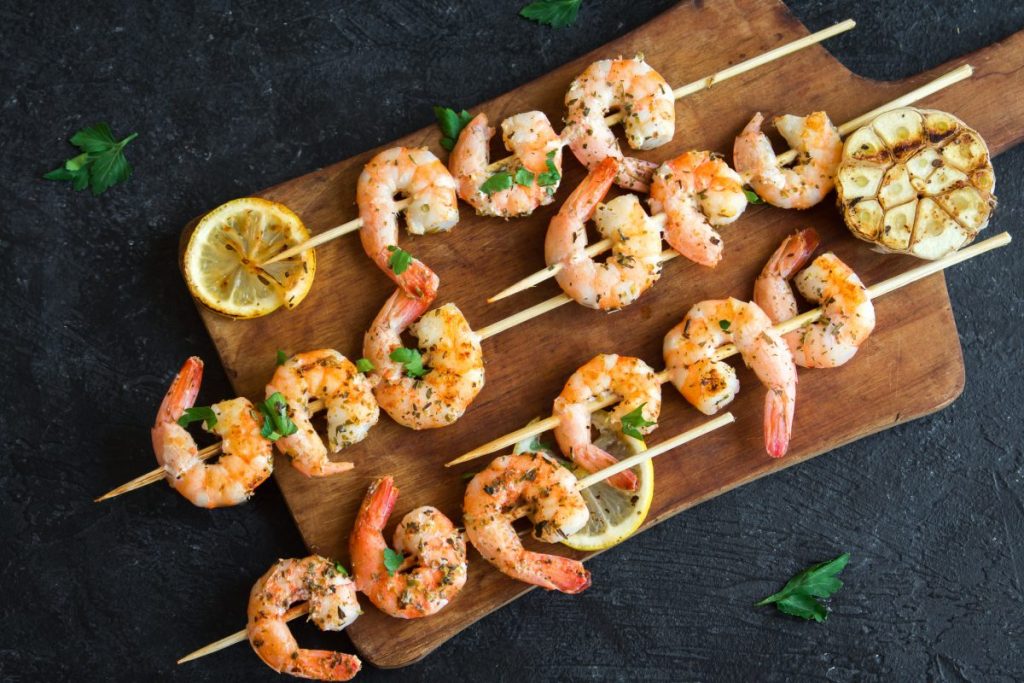 Roasted shrimp are easy to prepare, although cooking times must be watched carefully to avoid over-cooking. Begin with peeled shrimp and a baking sheet coated with oil or butter. Arrange the shrimp in a single layer on the baking sheet. Mix olive oil, salt, pepper, basil, grated Parmesan cheese, and diced or ground garlic in a bowl. Drizzle the mixture over the shrimp. Roast the shrimp at 400°F for 6-8 minutes. 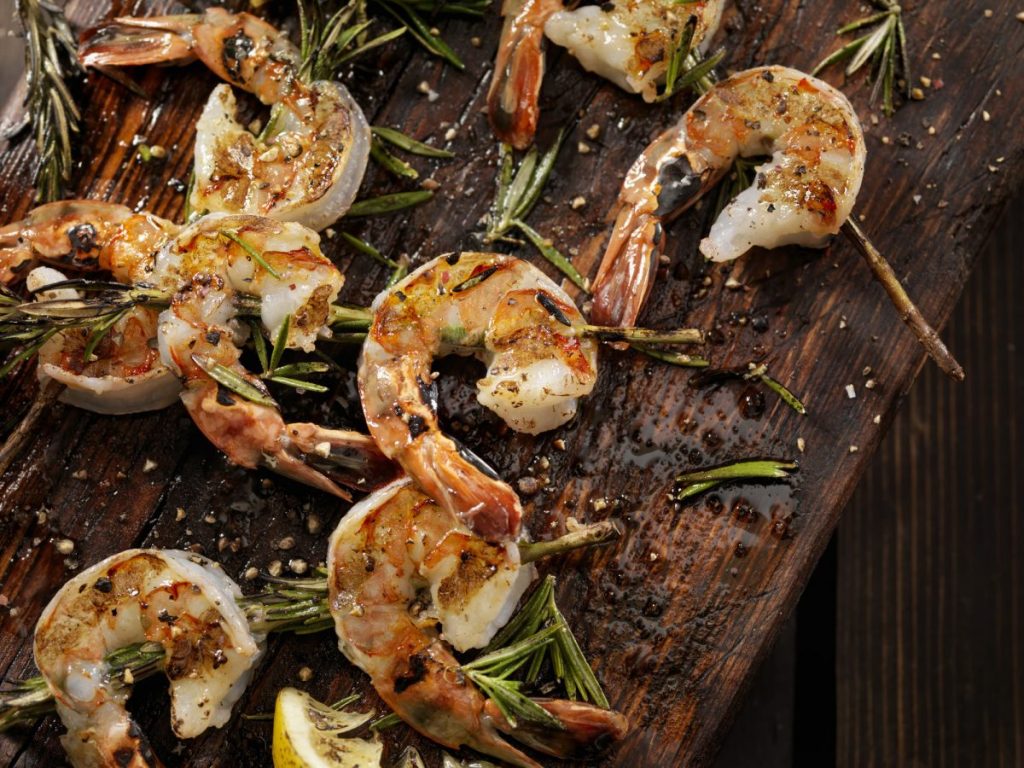 Shrimp with a rich, golden, crunchy coating are a favorite at many restaurants, but these tasty treats can be made at home too. Start with peeled and deveined shrimp, and heat fryer oil to 350°F. Mix water, cornstarch, and eggs in one bowl, while mixing breadcrumbs with garlic and onion powder in a separate bowl. Place the shrimp in the wet mixture and shake or stir for an even coating. Transfer the coated wet shrimp to the breadcrumb mixture in batches of 4 or 5. Place the breaded shrimp in the fryer oil to cook for 5-6 minutes until they are golden-brown. 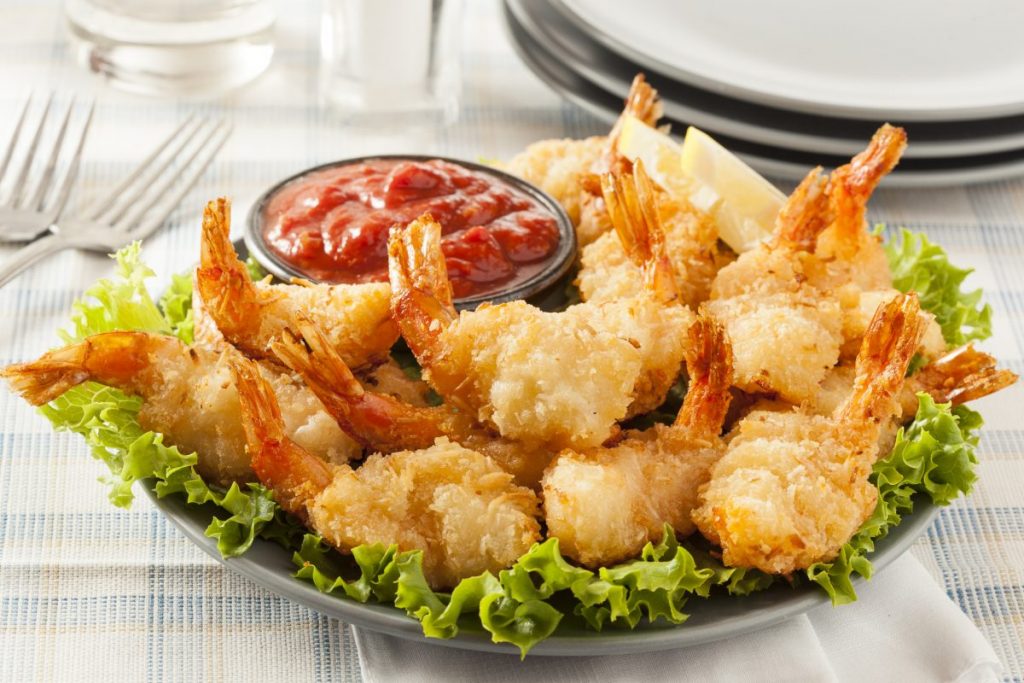 Shrimp cocktail usually begins with boiled shrimp, but the shrimp can be fried as well. Combine 1 cup of ketchup, 2 tablespoons of horseradish, 1 teaspoon of lemon juice, and a 1/2 teaspoon each of Worcestershire and hot sauce. The sauces can be substituted with different varieties according to personal preference. Mix all of the ingredients together. The shrimp can be mixed into the sauce and arranged on a bed of lettuce, or the sauce can be set out with a ring of shrimp for guests to dip. 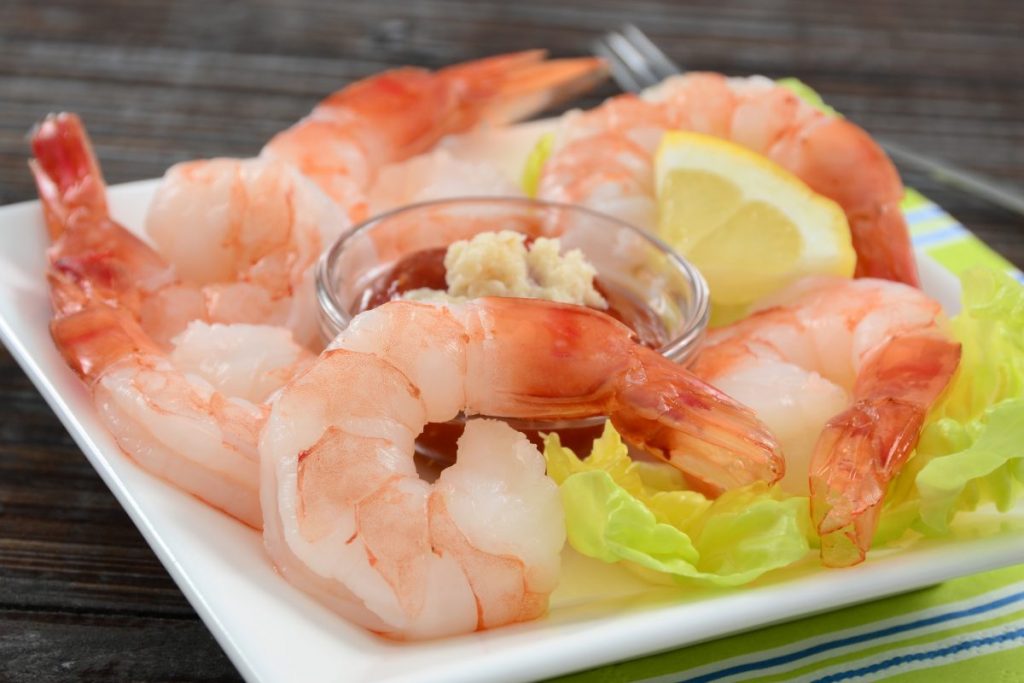 Peel each shrimp while leaving the tail intact. Start at the head, then remove the legs and shell. Place the peeled shrimp in a bowl, and rinse them under cold running water. Prepare the soup in a large pot, and cook it over medium or high heat. Bring the soup to a boil, then reduce heat and let it simmer. Gently transfer the shrimp into the hot soup, and cook for approximately 5 more minutes. The shrimp will be opaque when they are finished. The heads and discarded shells can be used for shrimp stock. 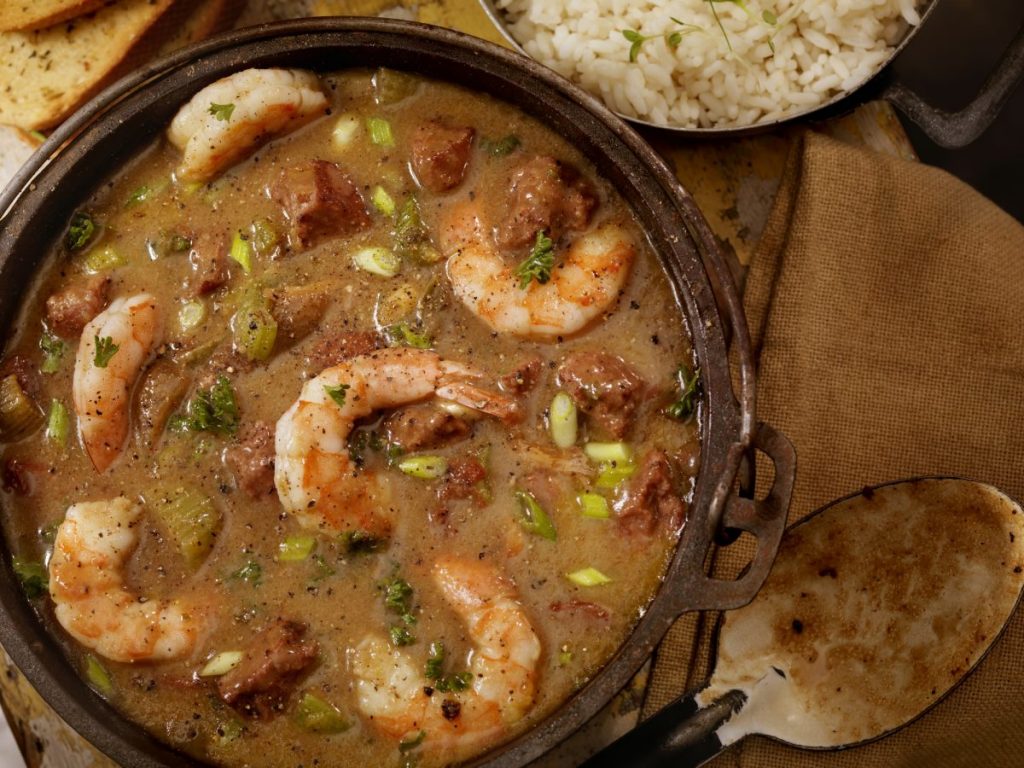