How to Cook Fresh or Frozen Lobster Tail Like a Gourmet

Home cooks who know how to cook lobster tail generally choose baking or boiling. There are so many other ways to create delicious lobster meals, though, including outdoor grilling which is growing in popularity. Each cooking technique brings out flavor in different ways and combines lobster with a range of herbs and spices. Along with lobster, consider some of the newer side dishes as well as traditional ones -- lobster and waffles is even becoming popular! Your choice of preparation will also guide any wine pairings and even bring craft beers under consideration.

Most people don't have easy access to fresh local lobster tails, but buying frozen allows you to choose from a greater variety anyway. Choose according to your budget and what's available where you are as well as the method you're using to cook. Warm water lobster tails tend to be less expensive but have a more bland taste. They often have spines instead of claws. Cold water lobsters such as those from Maine and Canada are the more choice varieties which taste wonderful simply dipped in melted butter. If you happen to be on the Maine coast or at another prime lobster location, you can visit the docks and buy your dinner live and ready to cook.

Fresh lobster tail should be cut down the middle of the shell, separated from the shell slightly and deveined before cooking. It should be prepared so that the shell is bright red and the meat turns from translucent to opaque white. Several tails can be cooked together or with fresh whole lobster when boiling or steaming, but watch the time for best tenderness. 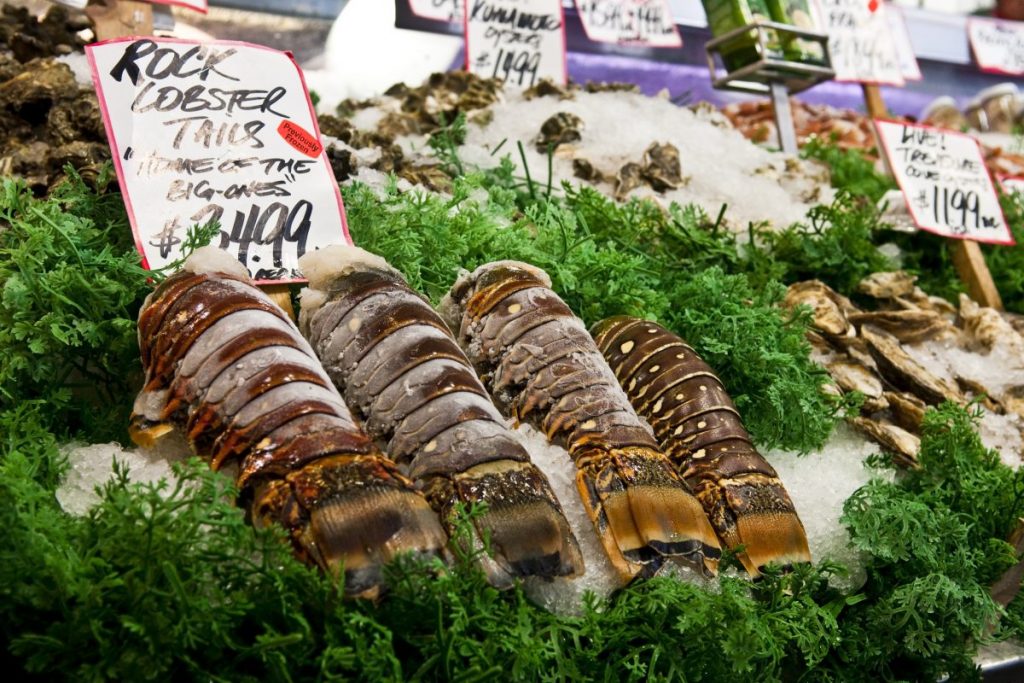 Frozen lobster tail allows you to prepare delicious seafood meals far from the ocean. There are several freezing techniques which are employed, some such as blast freezing more reliably preserving the flavor. Ensure that the meat has been held at the appropriate temperature until it's time to thaw. The lobster tail should be defrosted in cold water, about thirty minutes is typical for four ounces or change the water and continue defrosting a bit longer for larger tails. You can then proceed as with a fresh lobster tail. 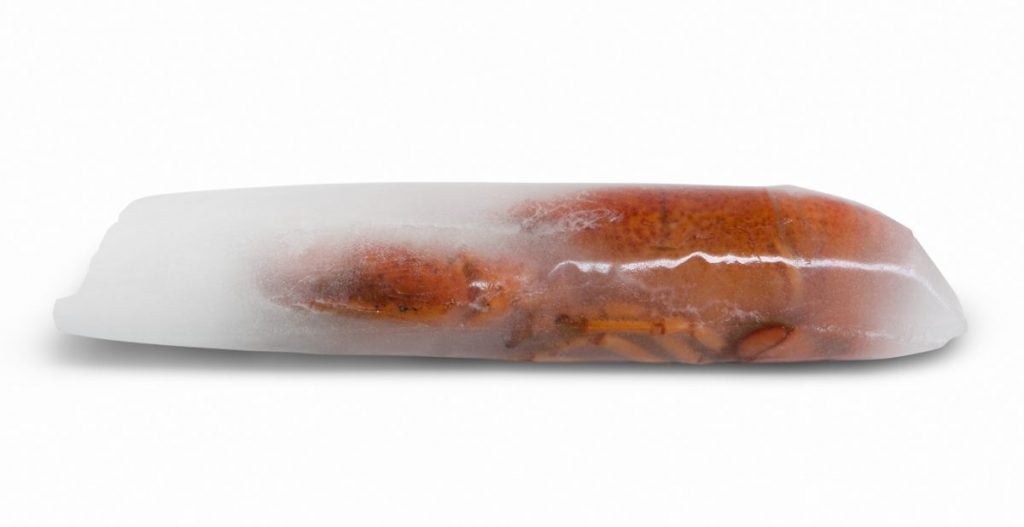 Basic recipes for baked and broiled lobster tail include butter, salt, white pepper and paprika with a lemon garnish after cooking. Some prefer garlic butter. The mix is added through the cut in the shell -- pull the shell apart and add it to the meat before cooking. Other seasonings include rubs which can prepare a tasty tail for grilling or oven preparation. 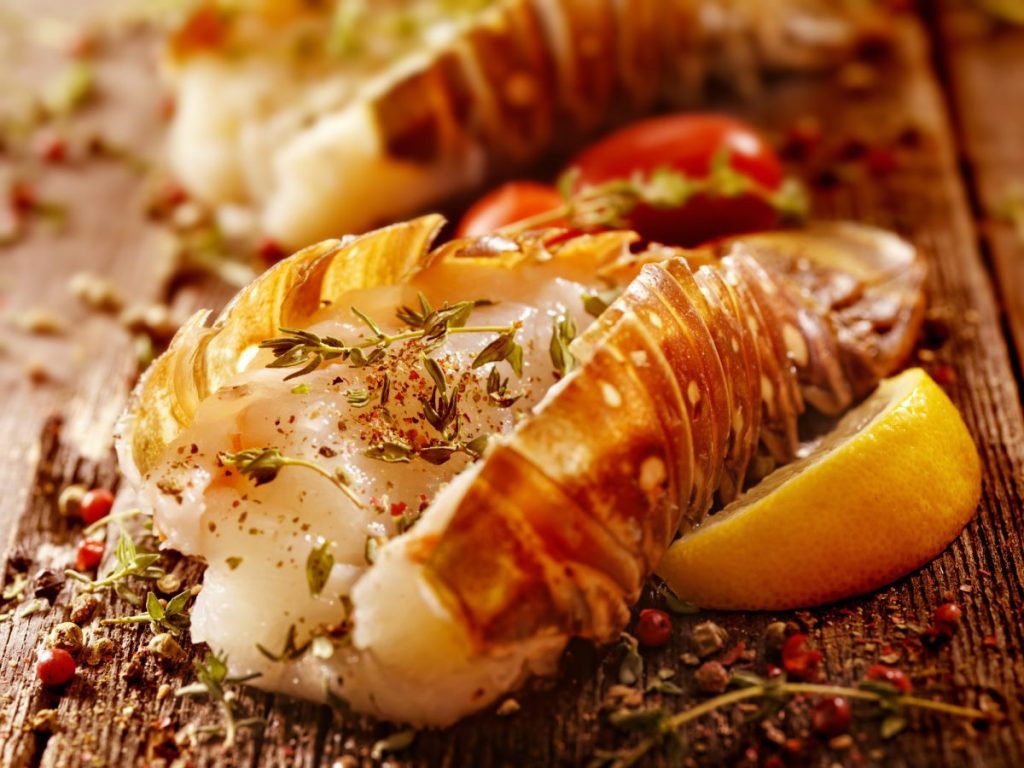 Seafood stuffing recipes such as crabmeat stuffing enhance the natural lobster taste with savory flavors. Baste the lobster with lemon butter before oven cooking and add the stuffing. Typical ingredients in a good stuffing include crabmeat, butter crackers, white pepper, lemon zest, garlic and sherry. Stuffing is especially good with warm-water lobster to bring out the flavor. 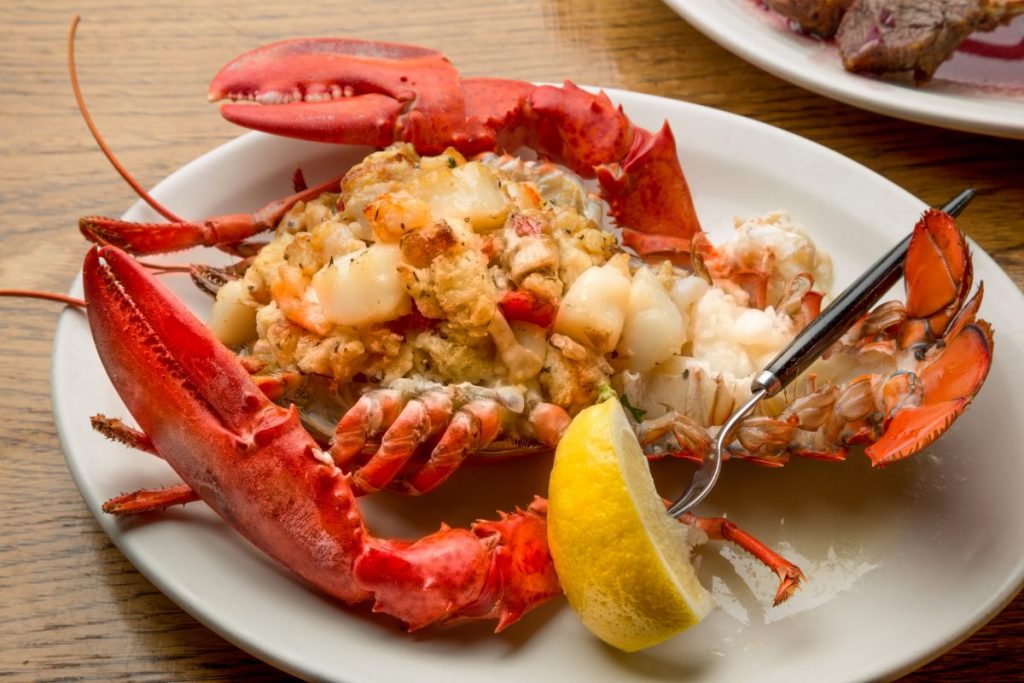 Baking and Broiling Your Lobster Tail

Bake lobster at 425 degrees F for one and a half minutes per ounce. The target internal temperature for lobster is 145 degrees F, with a visual test showing opaque white meat with no gray color remaining. For broiling, cut through the meat as well as the shell to butterfly it for best cooking. Lift the meat through the shell and rest it, still attached, on the shell. Broil at least five inches from the heat source for about four minutes, watching for the meat to turn opaque white. Keep close attention -- it can easily burn! 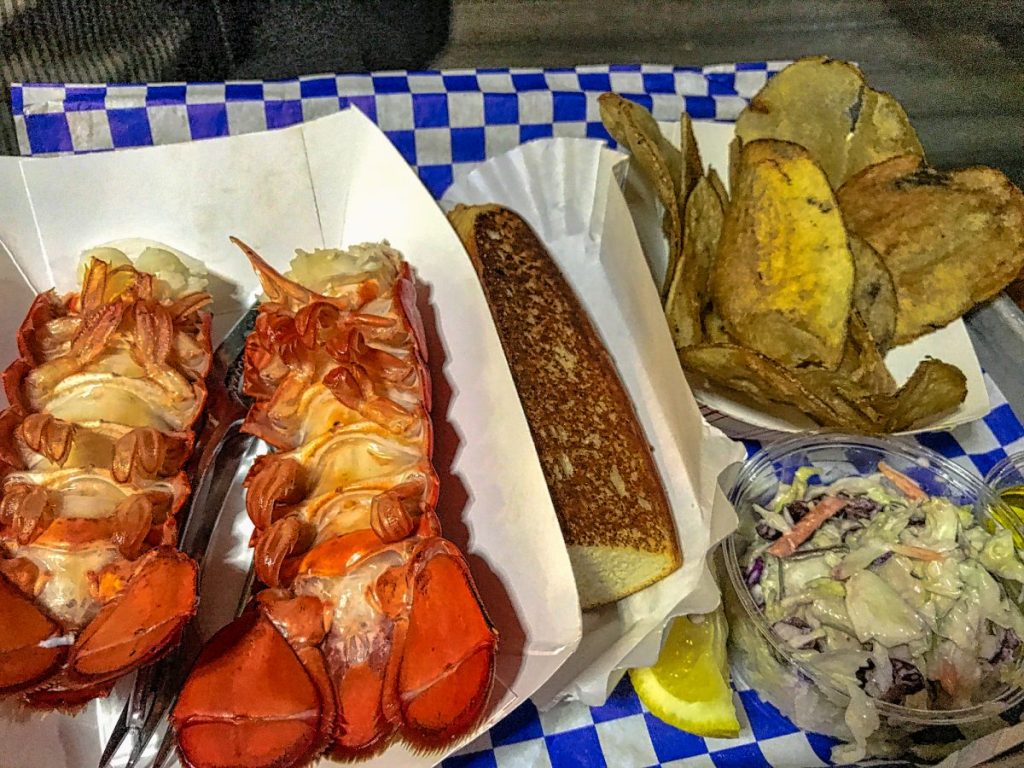 To prepare lobster tails for grilling, parboil them in boiling water, about two minutes per four-ounce tail. This will ensure even results when grilling and produce the best sweetness and moistness. Run a skewer lengthwise through each tail to avoid curling on the grill and place each tail with the hard side down. Cut through the underside and pour melted butter, lemon juice and seasonings onto the meat inside. Grill over medium heat with the hard side down for two to three minutes, checking frequently for overcooking. 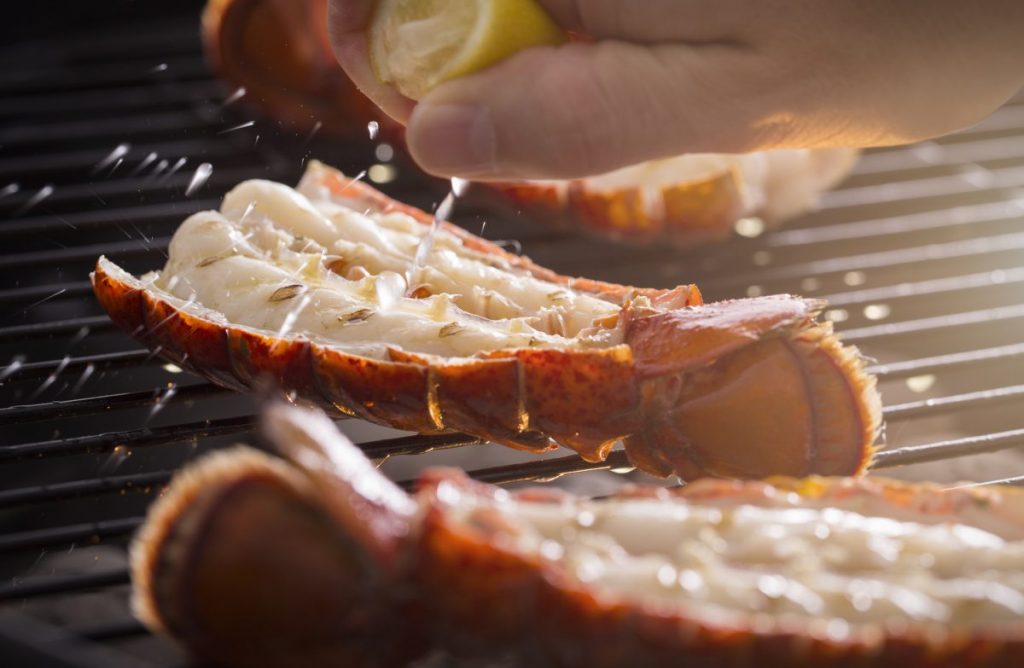 Lobster is delicious fried just as shrimp and other seafood is. This is a great way to prepare lobster in large quantities for a party. Use a simple coating mix such as one with cornmeal, flour, onion, garlic and cayenne pepper, or commercially available seafood coatings. Cook at 365 degrees F until the meat turns opaque white. 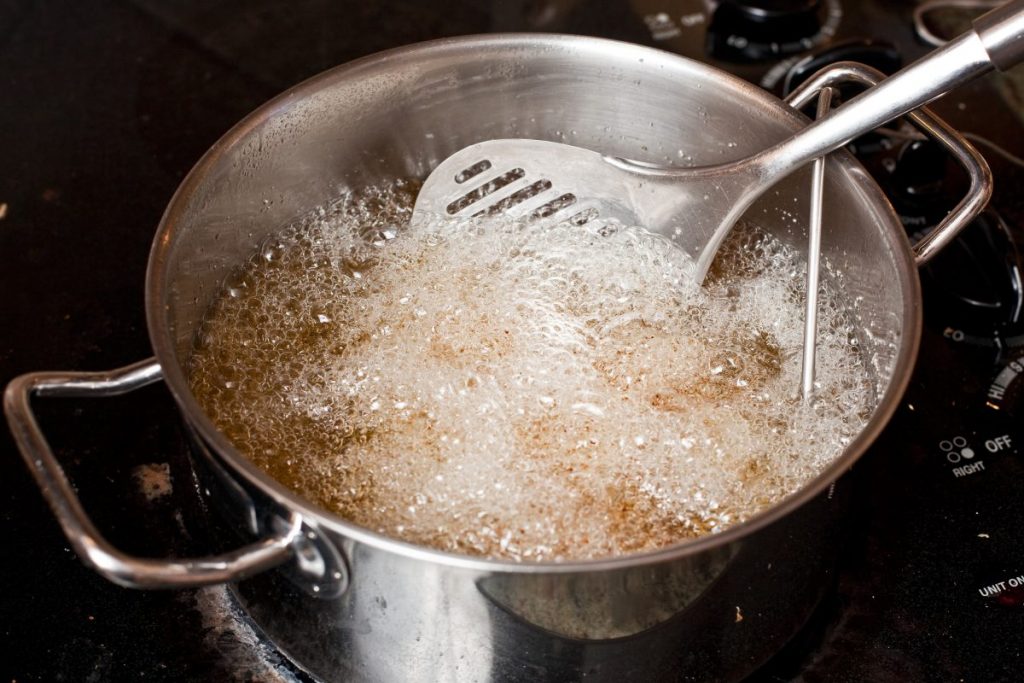 Boiling or Steaming Your Lobster Tail

Dinner for four with eight-ounce tails will take eight to twelve minutes to cook in boiling salted water, about six cups in a three-quart pot. Adjust the cooking time by weight using one minute per ounce as a guide. They're done when the meat is opaque white and the shell is bright red. Steaming works a bit better with more tender meat and a bit more flexibility in cooking time. Use a steaming basket and salted water or seawater in the pot, a couple of inches deep. Bring the water to a boil, add the tails to the basket and cover, then steam for about eight minutes looking for the same results as when boiling. 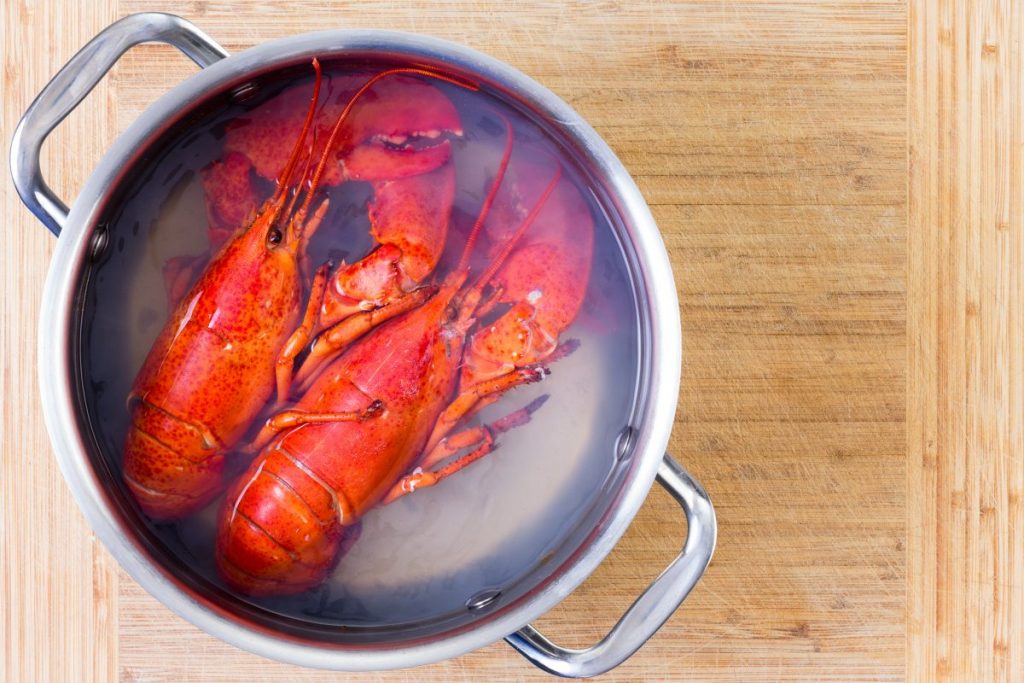 Side Dishes, Pairings and Plating for Lobster Tail

Shore dinner or surf and turf presentation are the classic lobster meals, but this delicious, flavorful meat lends itself to so many combinations of starches and veggies, especially when stuffed or seasoned. Consider an assortment of fresh steamed vegetables and rice pilaf. Wines to pair with include a Chardonnay, Meursault, or even Champagne. 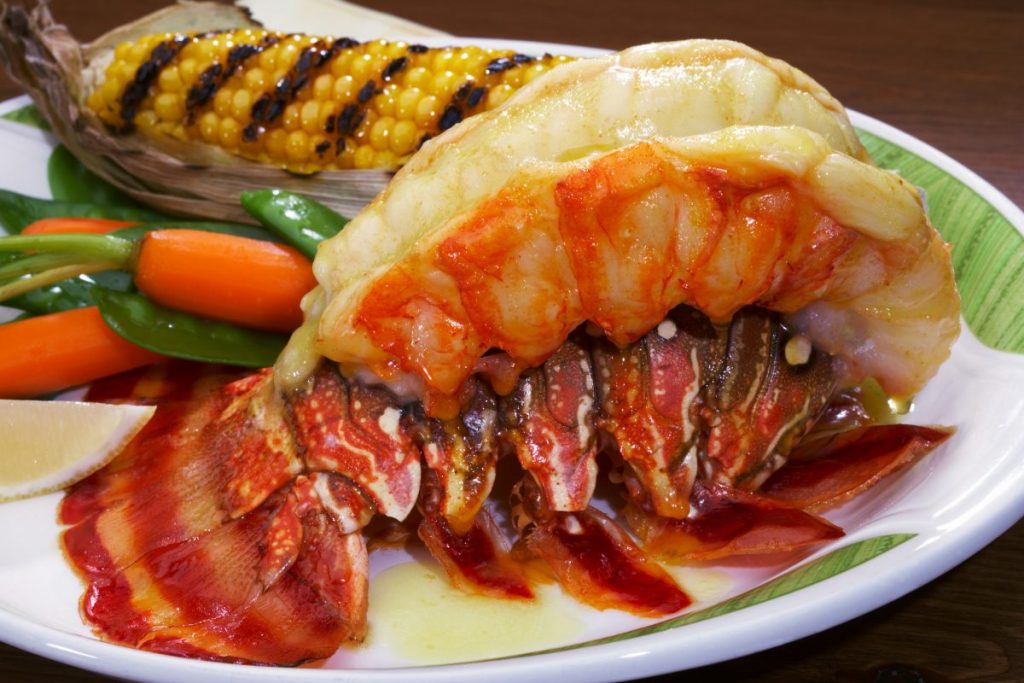