How to Bake a Potato

Potatoes are the world's fourth largest food crop and, not surprisingly, baked potatoes are a very popular dish. This tuber has long been such an essential crop, in fact, that a potato blight in the 1840s caused widespread famine. People have figured out how to bake a potato in almost any circumstance. Recipes and cooking methods have evolved and expanded ever since the first potatoes were grown by Inca tribes in Peru. This food is not just relegated to the side of the plate, beside the main course, either. Baked potatoes usually have crispy skin and soft, fluffy insides, and they pair perfectly with a variety of toppings.

Slow cooker potatoes are delicious, and the preparation for this method can be done hours before dinner, leaving you time to relax. Scrub the potatoes and poke six to eight holes evenly around each one. Cook the potatoes on the highest setting for 3 to 4 hours, or use the low setting to cook for 6 to 7 hours. You can wrap the potatoes in aluminum foil or leave them bare to absorb flavors if you're including meat and other vegetables. 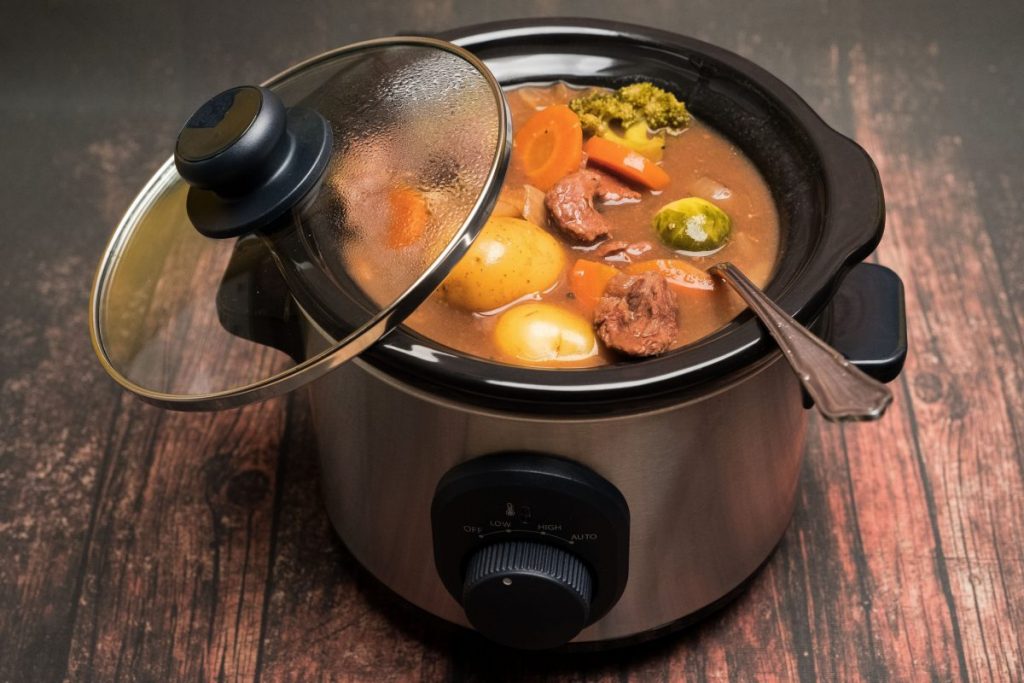 Potatoes made in a pressure cooker are ready to eat in only ten minutes. This method preserves moisture and prevents a too-dry dish. Pour 3/4-cup of water into the pot, and insert a clean steam rack. Wash up to 12 potatoes thoroughly, and poke holes evenly around each one. Cook the potatoes on the manual setting. 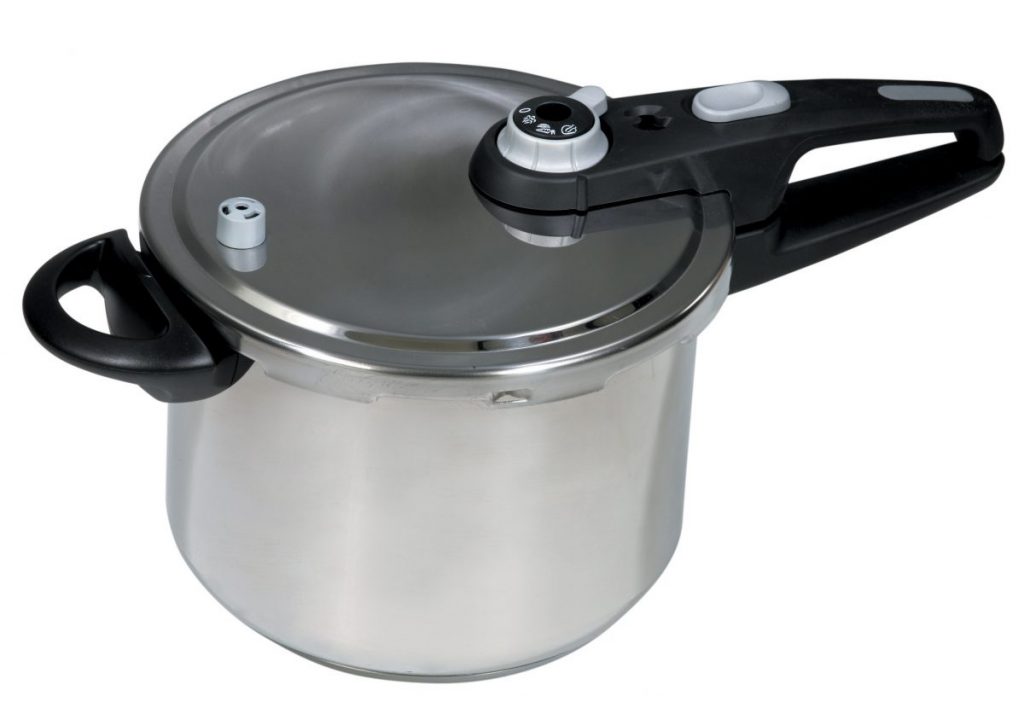 Some people prefer oven-baked potatoes. Using an oven can be time-consuming, but there is a way to shorten the baking process in a pinch. Preheat the oven to 400ºF and scrub the potatoes under running water. Dry the potatoes, and place a handful of Kosher salt in a small bowl. Poke a deep hole in the center of each potato. Microwave the potatoes on high power for 5 to 6 minutes. Increase the microwave time to 10 to 12 minutes for more than two potatoes. Transfer the potatoes from the microwave to a baking sheet, and drizzle olive oil over the pan. Roll each potato to coat in olive oil. Sprinkle the Kosher salt from the bowl over the potatoes. Place the oiled potatoes directly on the oven rack, and bake for 30 minutes, until the skins are crispy. 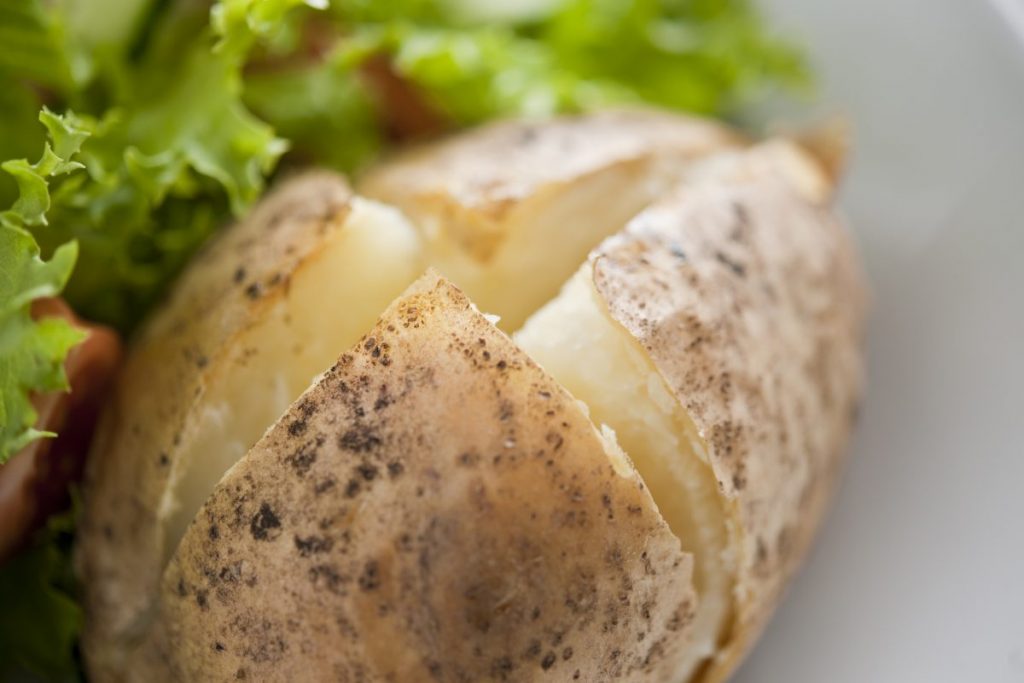 Oven-baked french fries have fewer calories and fat than fries cooked in oil. Cut three large potatoes into 1/4-inch-thick slices, and preheat the oven to 450ºF. In a large bowl, toss the potato slices with 2 tablespoons of canola oil and a 1/2 teaspoon of salt. Coat a baking sheet in butter or cooking spray. Arrange the potato slices in a single layer, then bake them for 35 minutes until they are golden and crispy. Transfer the fries to a plate and sprinkle with salt, ranch powder, or other seasonings. 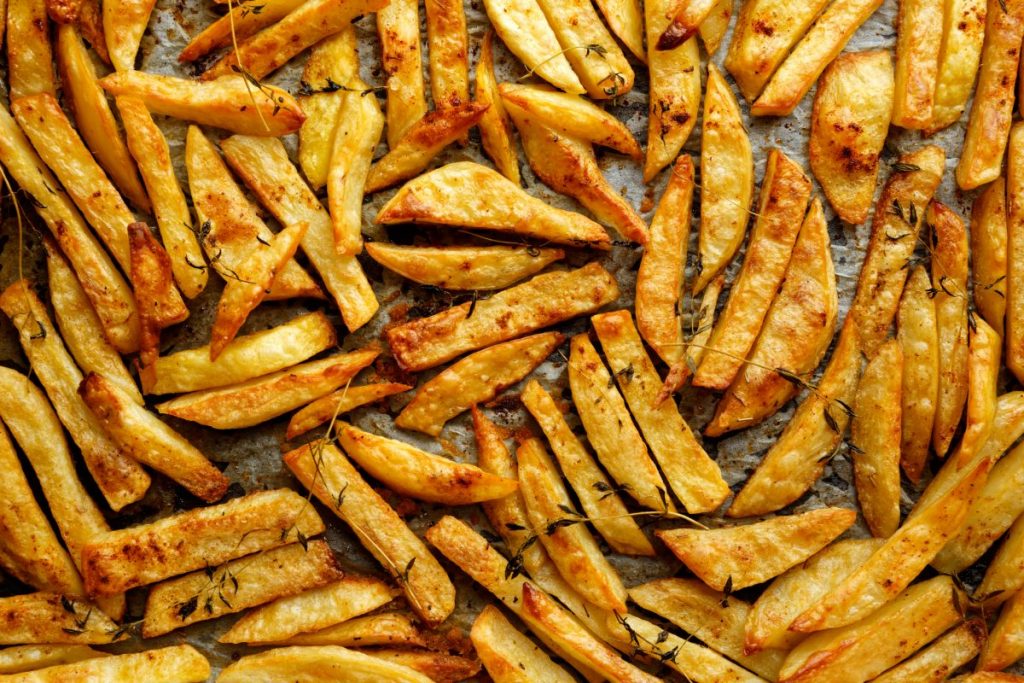 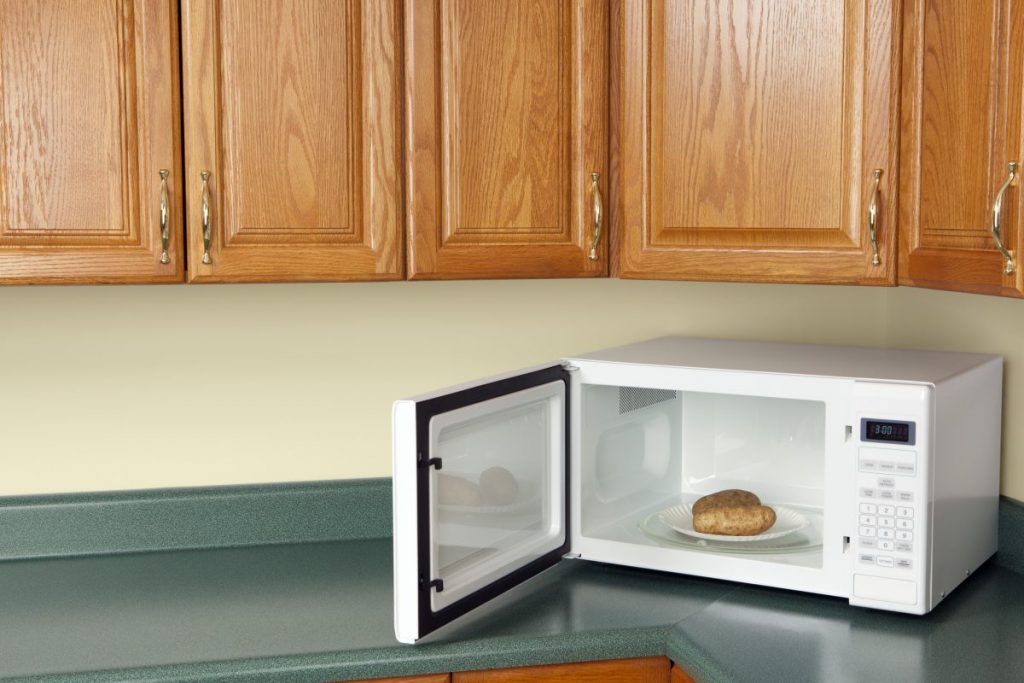 Preheat the oven to 425°F, and scrub the potatoes under running water. Remove blemishes or eyes with a paring knife, and rub each potato with olive oil. Poke holes with fork tines all over each potato, and season with salt and pepper. Bake the potatoes for 50 to 60 minutes directly on the oven rack or in a baking pan. Flip them every 20 minutes. The potatoes are finished when they can be pierced easily with a fork. 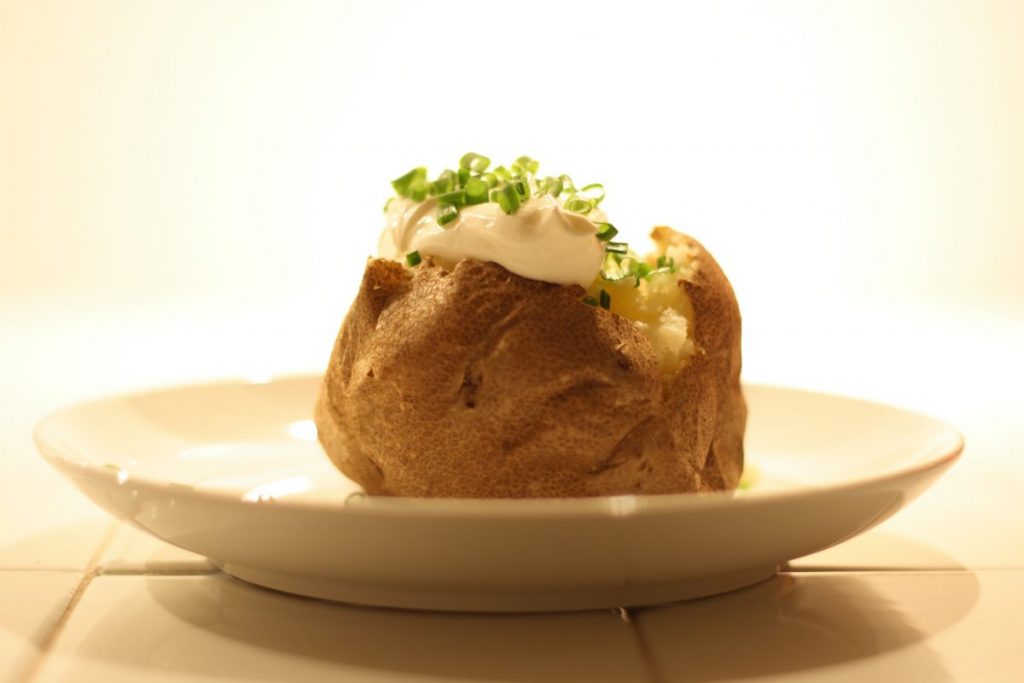 Preheat the toaster oven to 400ºF on the bake setting, and position one rack in the middle of the oven. Scrub four medium or large potatoes. Poke 12 to 16 holes in each potato, and rub a 1/4 teaspoon of olive oil on each one. Place the potatoes directly on the oven rack. Bake for 55 to 60 minutes until the potatoes are soft enough to easily pierce with a knife. 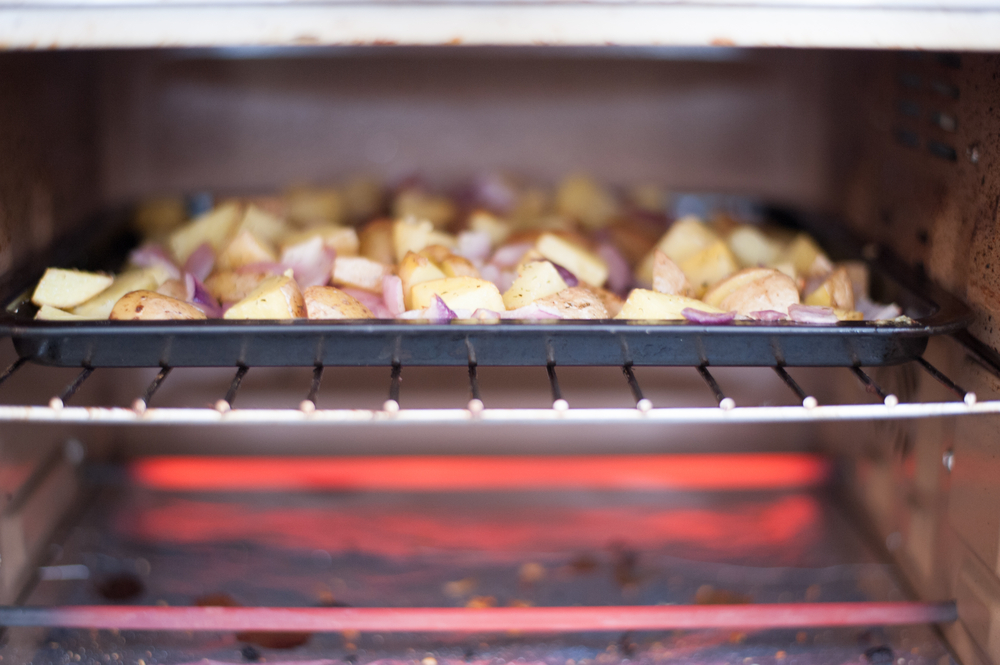 Baking potatoes over a campfire is fairly simple. This method is useful while camping, but it may also come in handy for a fire in the backyard during a cookout or party. Scrub the potatoes with clean water, and cook in batches of four. Poke holes around the entire potato with a fork, then coat each one with 1 tablespoon of butter. Wrap each potato in a double layer of aluminum foil and bury them in the hot coals. Let them cook for 30 to 60 minutes until they are soft. 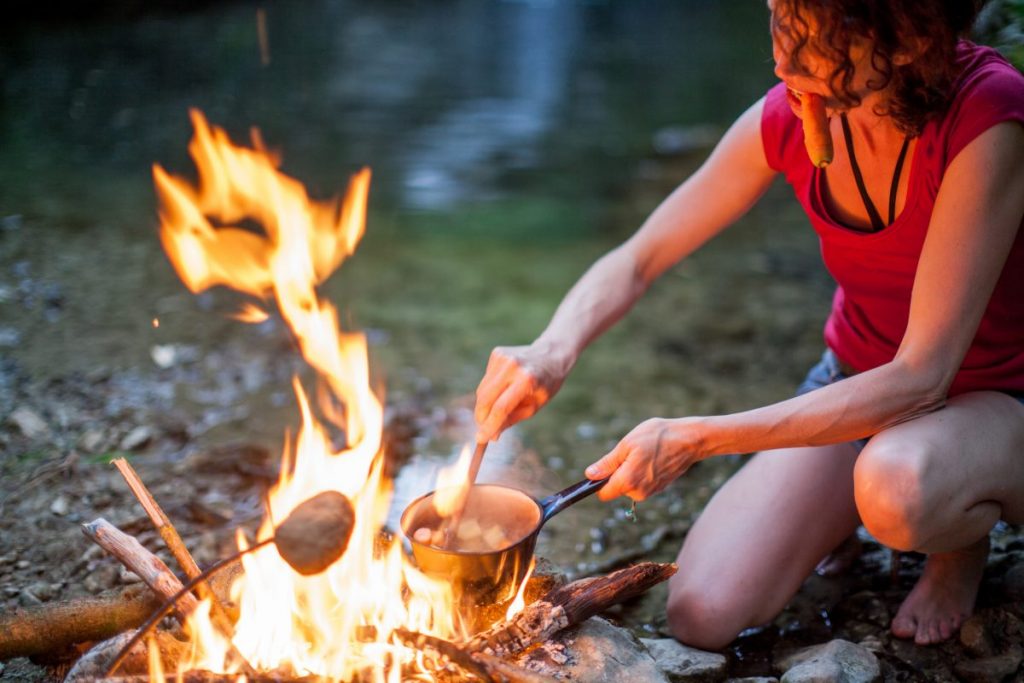 Grilled baked potatoes are delicious, and let the cook enjoy the nice weather outdoors. Scrub four large potatoes, and coat them in olive oil and salt. Poke 16 to 20 evenly-spaced holes around each potato so heat escapes while cooking. Wrap each potato separately in aluminum foil, and poke 6 to 12 holes in the foil so smoky flavor reaches the potato. Place the potatoes on the grill with the cover closed. Cook the potatoes over medium heat for one hour, turning them at least three times while cooking. The potatoes are done when they are soft inside with a temperature of 210ºF. 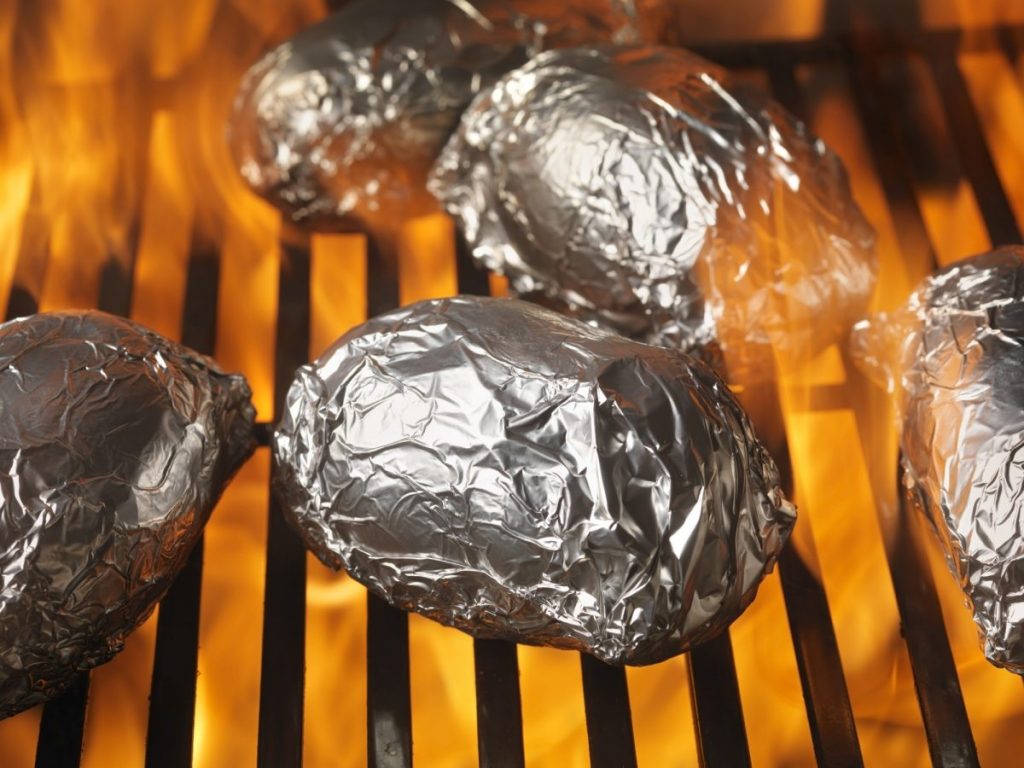 It's good to learn how to bake a potato with a reflector oven. This is another camping method that is also useful when utilities are out of service. A reflector oven is simply sheet metal shaped into a box, with an open side to focus campfire heat. This recipe is a quick and easy method for preparing a delicious meal. Dice three large or medium-sized potatoes into small cubes. Saute bacon in the reflector oven on a piece of metal or baking sheet. Onions, garlic, or other flavorings can be added with the bacon. Cook until the bacon is soft, then add the potatoes. If bacon is not available, use vegetable or olive oil. Bake the potatoes for 15 minutes, then stir and flip the cubes. Bake for another 15 minutes, and pull the baking sheet out of the oven when potatoes are the desired texture. 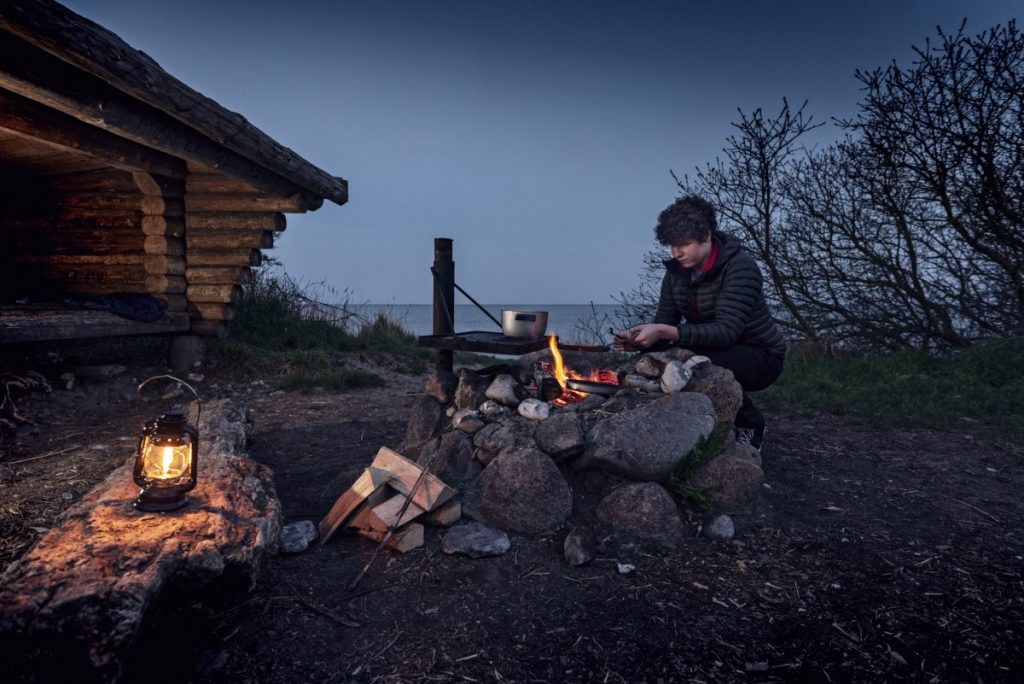