How Do I Make Banana Pudding?

Banana pudding is a dessert with layers of sweet vanilla cookies and fresh bananas covered with cream or meringue. There are many variations of this dessert, but most use vanilla or banana custard with vanilla wafers.

Banana pudding originated in the southern United States. It is very similar to a dessert called an English Trifle made with custard, fruit, sponge cake, and whipped cream. Many chefs and home cooks created personal variations. One of the earliest known banana pudding recipes came from "The Kentucky Receipt Book" published in 1903.

Mix the sugar, flour, salt, and milk in a large saucepan. Cook over medium heat until the mixture thickens, then reduce heat to its lowest setting for 2 minutes. Whisk the eggs in a small bowl. Remove the saucepan from the burner and slowly stir in the eggs and vanilla extract. Put the saucepan back on the burner and bring to a low boil. Let the mixture boil for 2 minutes while stirring gently, then turn off the heat. Layer 25 vanilla wafers in an 8 x 8-inch baking dish. Spread half the pudding over the wafers. Place half the banana slices over the pudding, then repeat the layers. Refrigerate overnight and serve topped with crushed wafers. 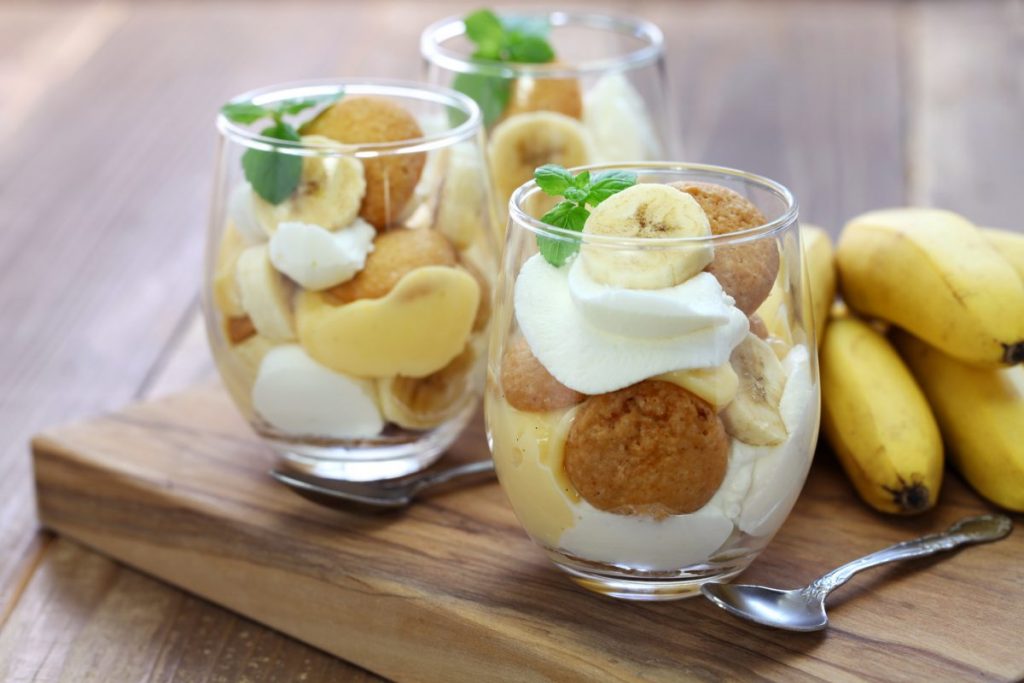 Combine the pudding mix and milk in a small bowl. Fold whipped topping and diced bananas into the pudding. Lay 3/4-cup of the vanilla wafers across the bottom of an 8 x 8-inch baking dish. Layer half the pudding mixture over the wafers and repeat layers with the remaining ingredients. Garnish with sliced strawberries and whipped cream. 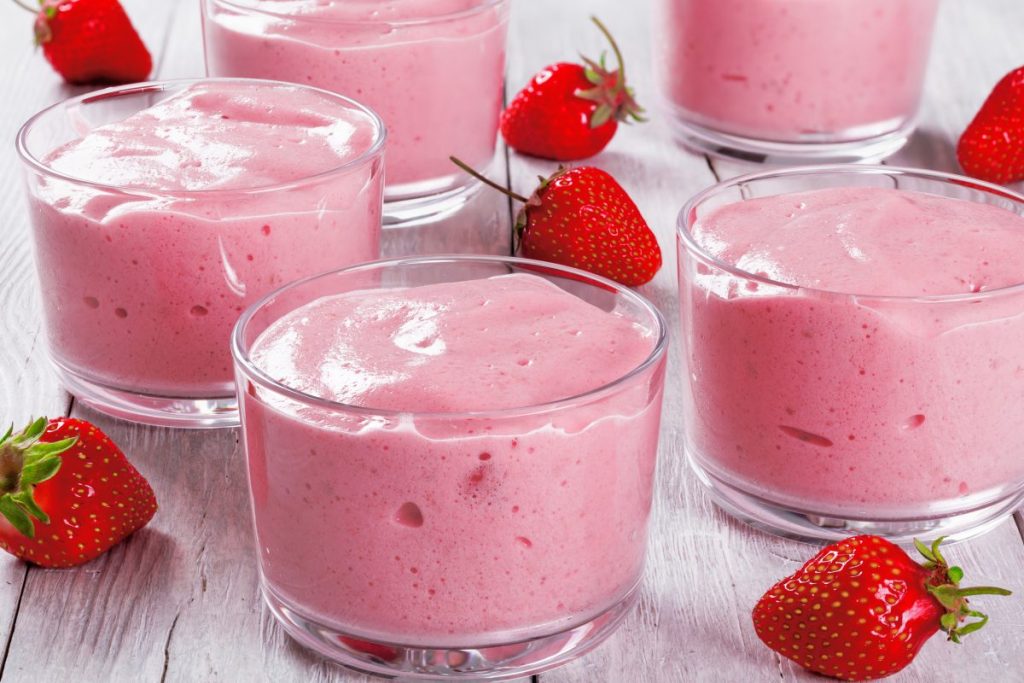 Combine the pudding mix and milk in a large bowl and let sit for 3 minutes. Stir the whipped topping, marshmallows, and bananas into the pudding. Serve the dessert immediately so the bananas are fresh and the cookies are crispy. 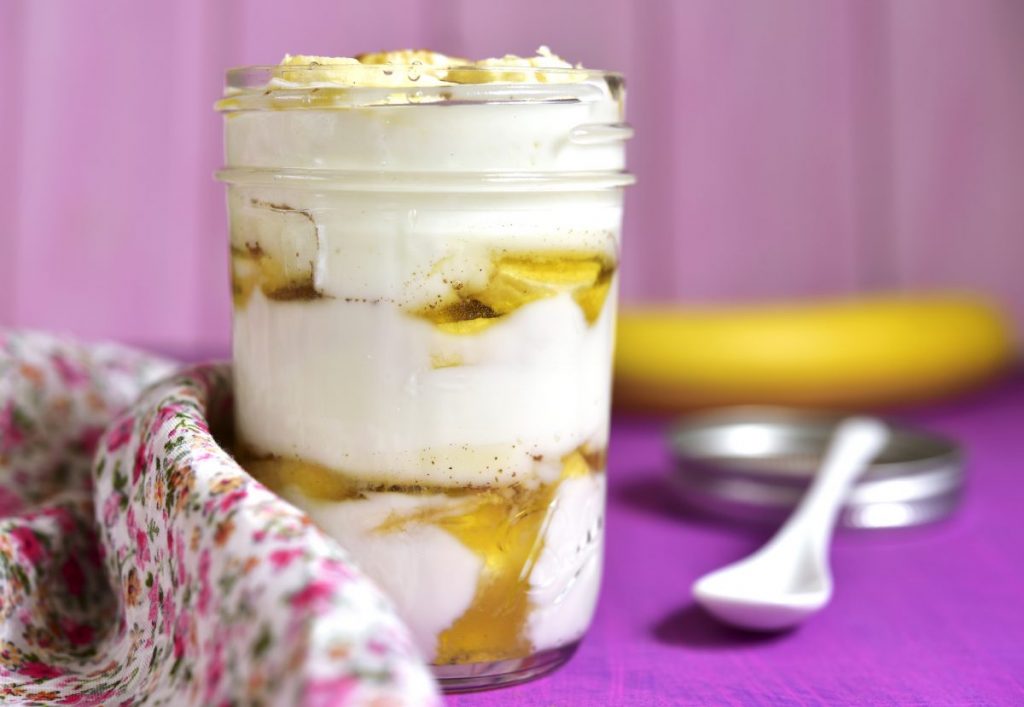 Stir milk, pudding mix, and condensed milk together in a large bowl. Combine cream, sugar, and vanilla in another bowl and beat it until stiff peaks form. Save half of the cream mixture. Fold half of the cream and 1/3-cup of caramel into the pudding. Line a 3-quart dish with vanilla wafers. Spread a third of the pudding and bananas over the wafers. Drizzle caramel and sprinkle sea salt over the bananas. Repeat layers until the dish is full. Refrigerate the dessert for 3 hours. Garnish with the remaining cream and crumbled cookies. 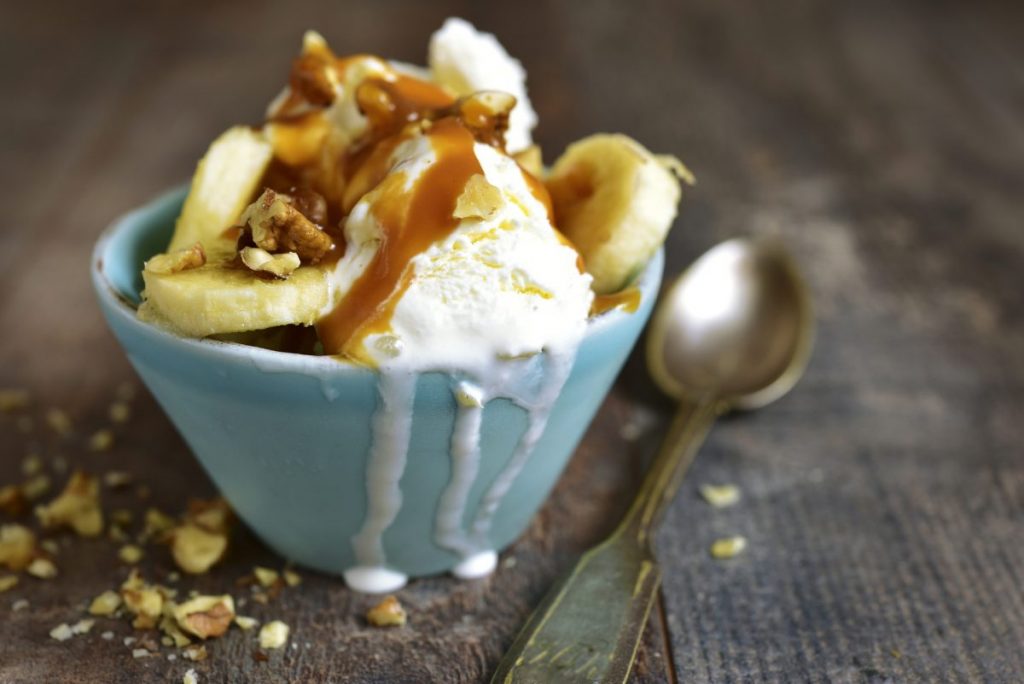 Make the pudding according to instructions on the box. Use an electric mixer to whip the cream cheese, vanilla, powdered salt, and sugar until it is smooth. Fold the pudding, 1 sliced banana, and 1/2-cup of whipped topping into the mixture. Line a bowl with whole vanilla wafers and pour the pudding on top of the wafers. Top the dessert with crushed cookies, the remaining whipped topping, and remaining banana slices. 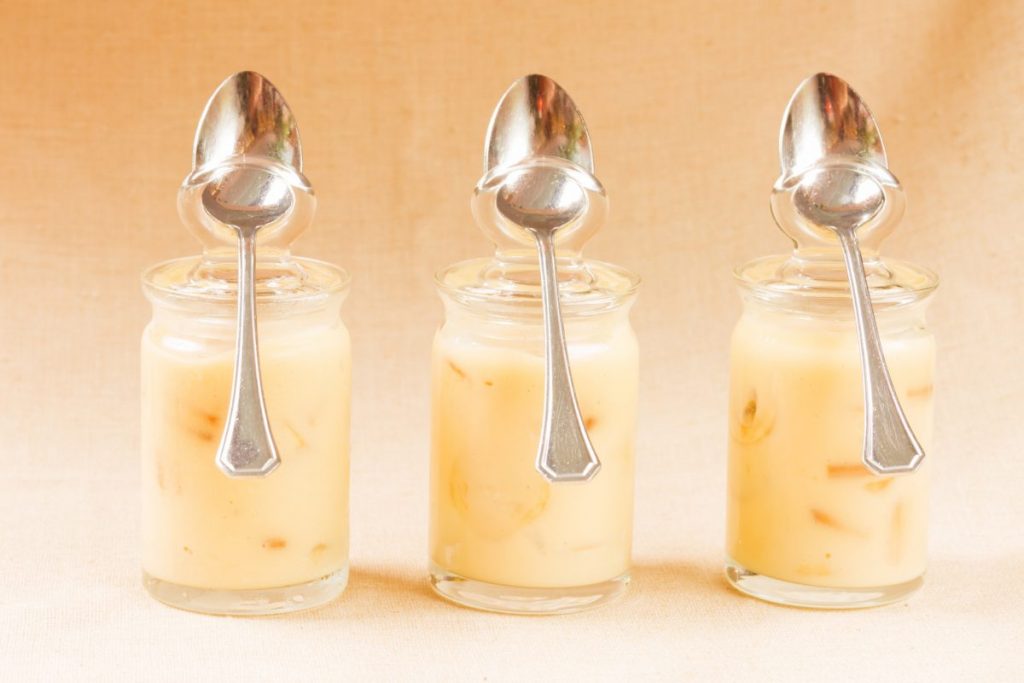 Fill a large bowl with ice water for an ice bath. Whisk the egg yolks in a bowl with the rum and cornstarch. Bring the milk, sugar, and vanilla to a low simmer in a saucepan over medium heat. Remove half the mixture from the saucepan and whisk it into the egg yolks. Pour the egg yolk mixture back into the saucepan. Cook the mixture until it thickens, then place the saucepan in the ice bath. Stir the pudding until it cools to room temperature, then refrigerate it for 4 hours. Layer the chilled pudding with vanilla wafers and sliced bananas and garnish with whipped cream. 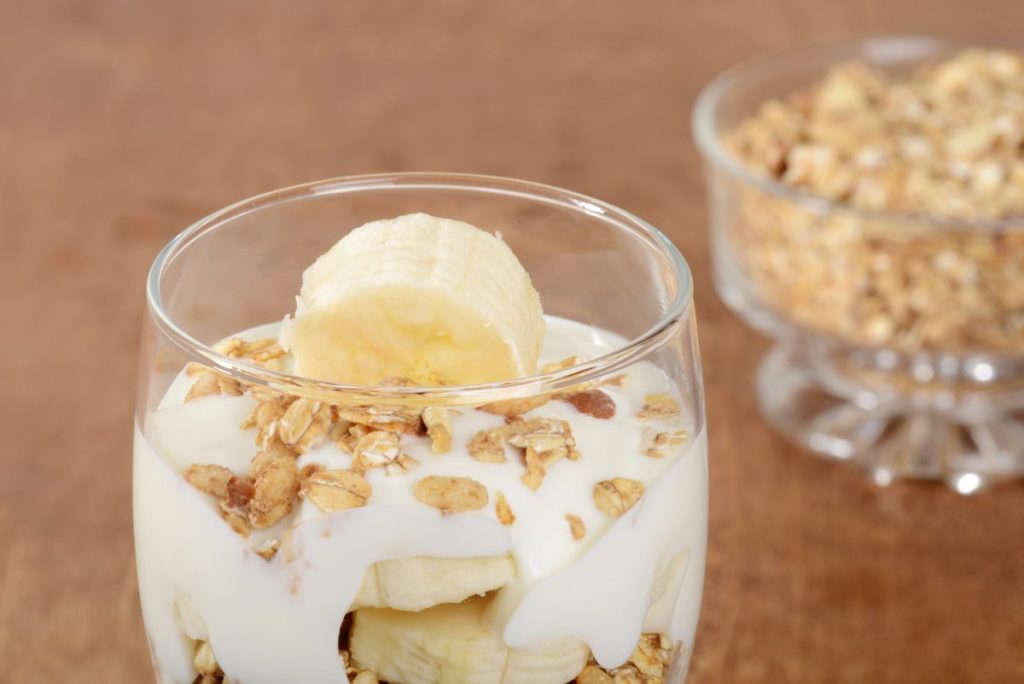 Banana pudding is familiar to most people as a chunky dessert with pieces of banana. Milk infused with banana is perfect for smooth, creamy banana pudding. It also adds flavor and richness to other desserts.

Combine the milk, vanilla extract, and diced bananas in a 3-quart steel saucepan. Bring the mixture to a simmer over medium heat while stirring continuously. Remove the saucepan from heat after the mixture reaches a simmer. Let it stand for approximately 4 hours until it reaches room temperature. Pour the mixture into a large bowl with a cover and refrigerate it for 24 hours. 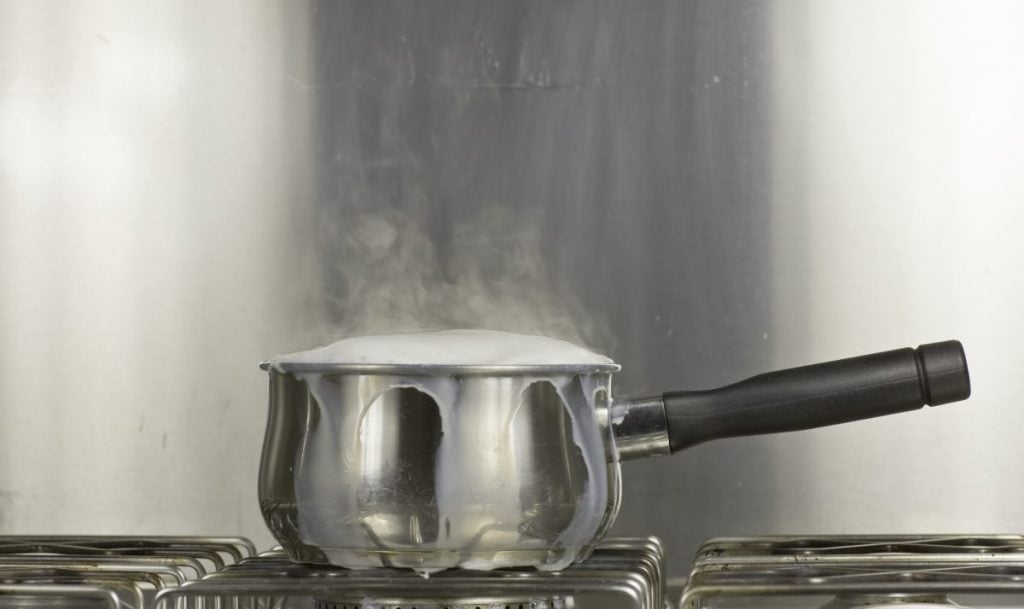 Pour the banana-infused milk into a saucepan. Bring the milk to a simmer, then strain the liquid through a fine-mesh sieve into a large bowl. Set the pulp aside since it is not needed in this recipe.

Mix sugar, cornstarch, salt, and ground clovers into the saucepan. Whisk the egg yolks and infused milk into the sugar mixture in the saucepan to make a custard. Warm the custard over medium-low heat for approximately 5 minutes.

Increase the heat and cook until the custard thickens and bubbles. Pull the pan off the heat after bubbling starts. Pour the custard into serving dishes and garnish with nuts, fruit, whipped cream, or other toppings. 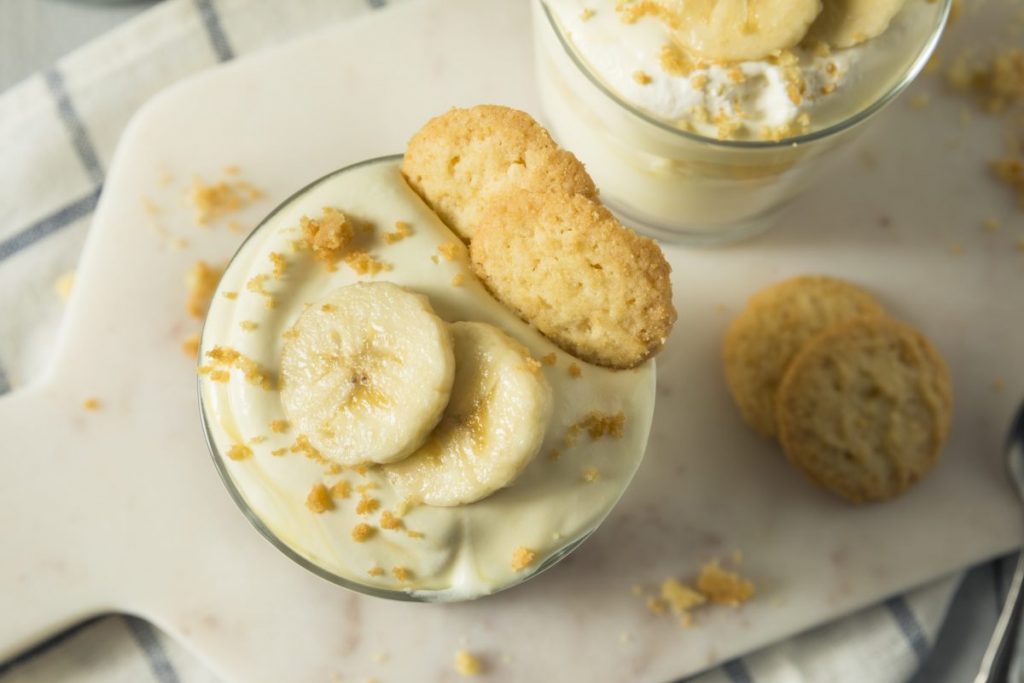 Combine the coconut milk, pudding mix, and condensed milk in a large bowl. Cover the bowl and refrigerate it for 2 hours. Beat the heavy cream in a bowl until it stiffens and fold the whipped cream into the pudding mixture. Lay a third of the vanilla wafers across the bottom of a trifle bowl. Layer a third of the bananas, pudding, and crushed pineapple over the wafers and sprinkle with coconut flakes. Repeat the process twice more with a third of the ingredients in each layer. Refrigerate the dessert overnight, then serve with crushed vanilla wafers and toasted coconut garnish. 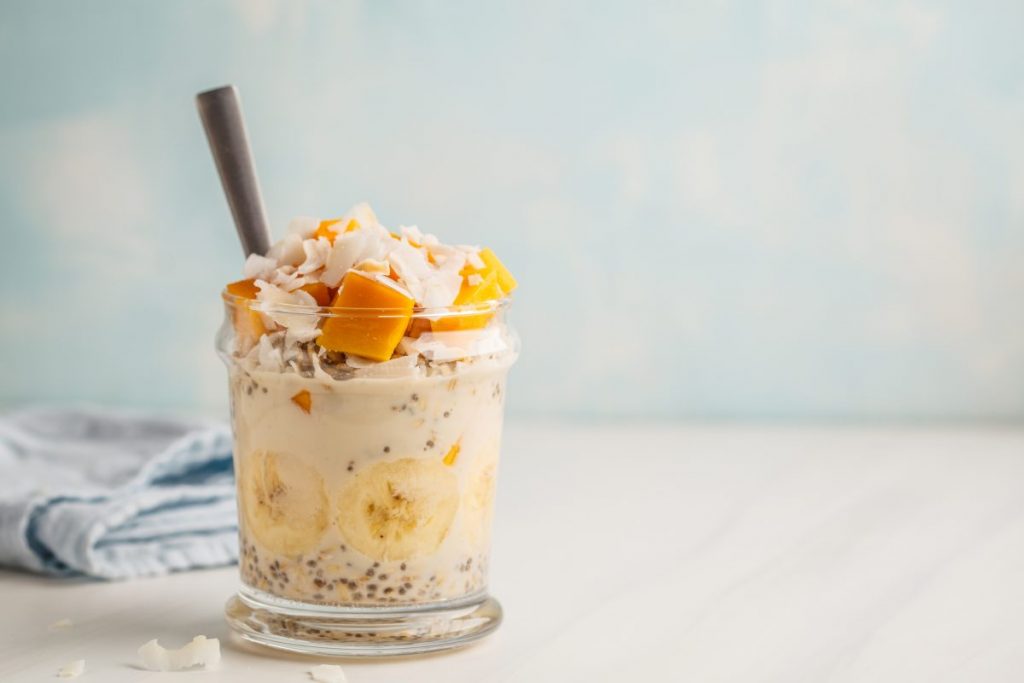 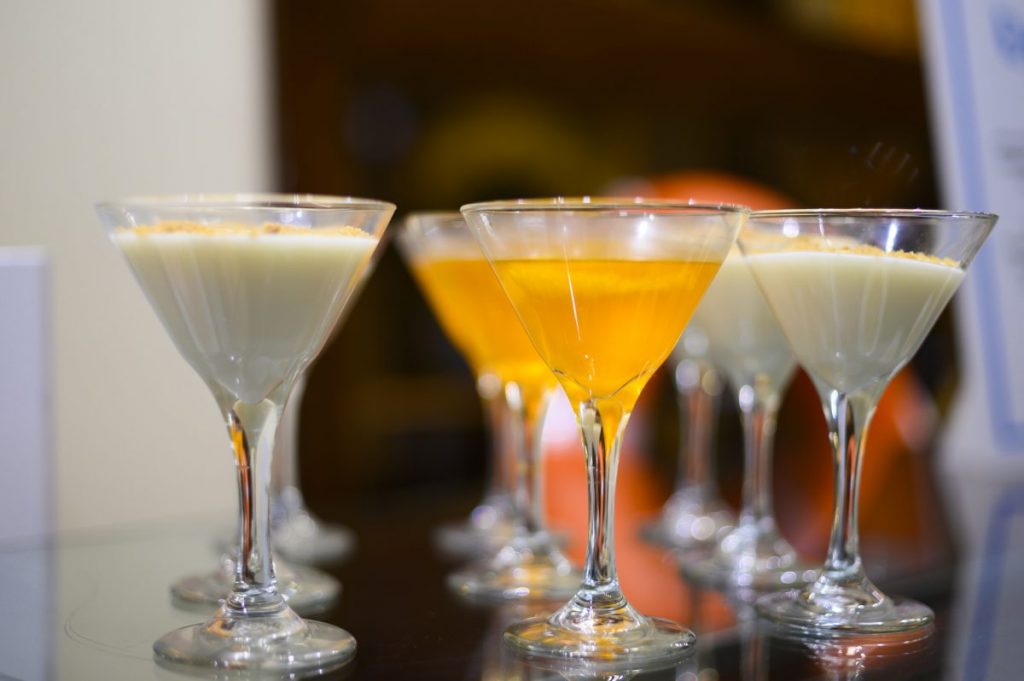