Hummus has always been a staple in Middle Eastern and North African cultures, but it has started to enjoy growing popularity in the west as well. Hummus is a simple spread or paste made of mashed chickpeas plus a few other healthy ingredients which can be spread on vegetables, crackers, bread, pita, tortillas, or a wide variety of other foods. Its ingredients--including beans, garlic, and olive oil--are key elements in the healthy Mediterranean diet, which is known to lower cholesterol, reduce inflammation, and defend against cancer.

A basic hummus recipe usually has six ingredients: chickpeas, olive oil, garlic, lemon juice, sea salt, and tahini. Hummus can easily be made in a blender or food processor. The tahini and lemon juice should be blended first, for at least a minute. Next, add the chickpeas and garlic. Blend each addition thoroughly! Finally, add the olive oil, and for extra creaminess, add some cold water.

The measurements for these ingredients aren't always exact, and you can modify them to taste. But a good starting point is two cans of chickpeas, 1/4 cup of lemon juice, 1/4 cup tahini, two tablespoons of olive oil, and a small clove of garlic. Salt can be added to taste, as can cumin, paprika, or other spices. This basic recipe can be used as the foundation for many exciting hummus varieties. 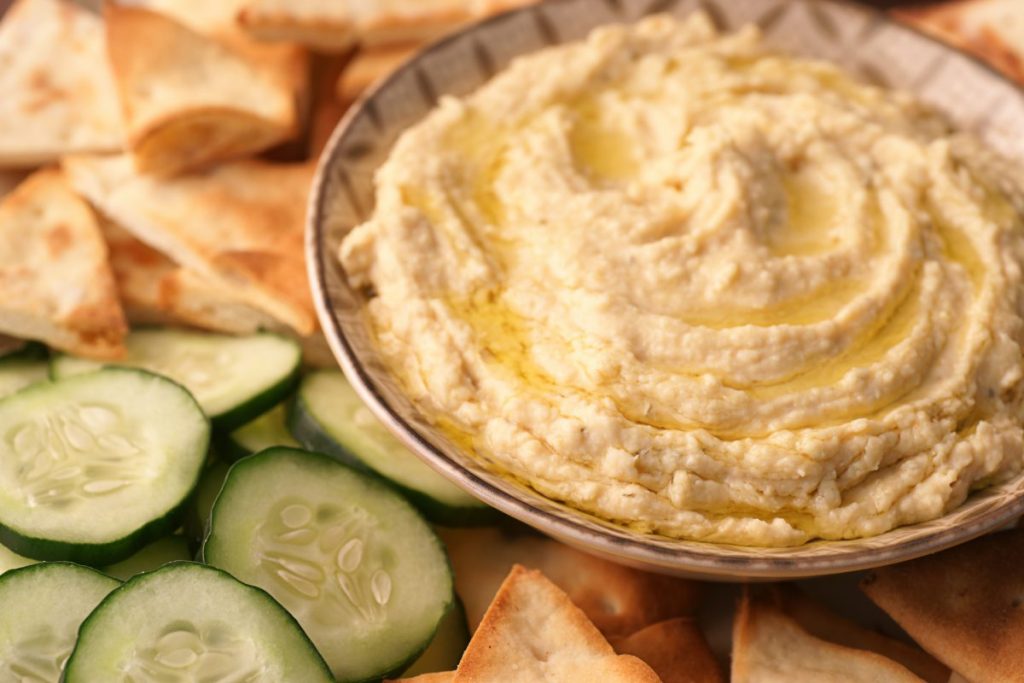 Avacado is enjoying unprecedented popularity right now, and with good reason. It's not only delicious but filled with healthy fats and nutrition. Added to a basic hummus, there could hardly be a healthier accompaniment to veggies, chips, or bread.

To make avocado hummus, which is a cross between guacamole and hummus, start with the basic hummus recipe. Add two whole avocados, peeled and cored. Instead of the lemon juice of the basic recipe, add three tablespoons of lime juice. Other exciting flavors for this recipe includes cilantro and black pepper, which you should add to taste. 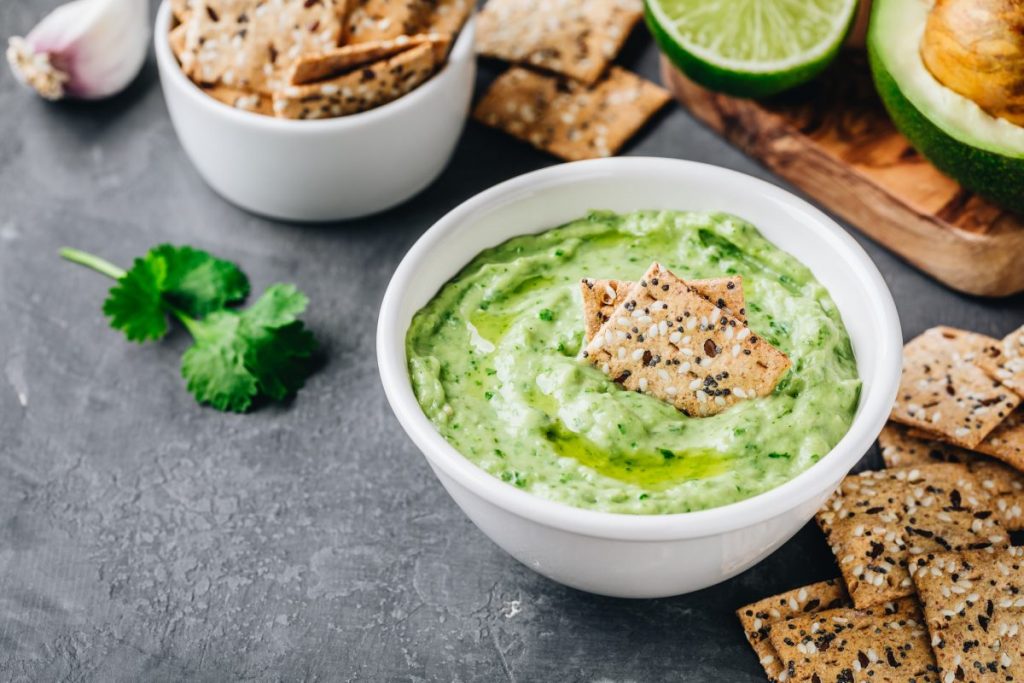 Even people who don't like onions love the sweet, tangy taste of caramelized onions. When mixed with the creamy, slightly salty taste of hummus, the combination can be positively addictive!

Start with a basic hummus recipe, then caramelize your onions, using a whole sweet or yellow onion. Slice it evenly and then sautee the slices in a pan in a few tablespoons of olive oil. This will take about 40 minutes until they are truly caramelized. Use more onions than you think you will need because they reduce in volume as they cook. Once they are completely browned, mix 2/3 of the onions into the hummus, and save the other third to use on top as a garnish. 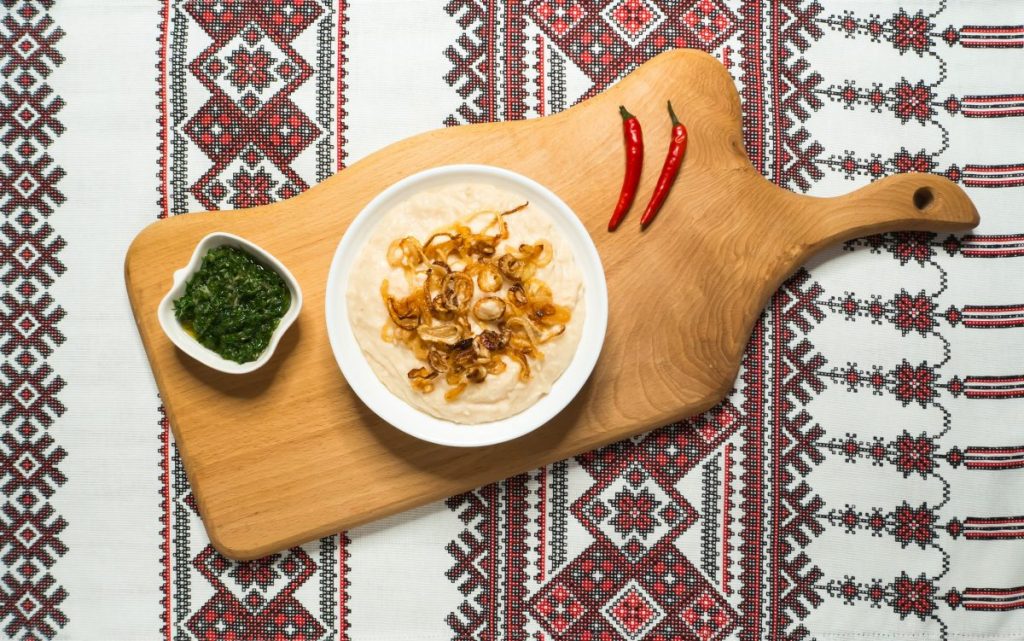 Rosemary garlic hummus takes the basic recipe to a subtle new level. Without losing any of the good natural flavors of plain hummus, it uses two of the most delicious spices in the world to accent them and create a whole new experience.

Using the basic recipe, instead of simply adding and blending the garlic, take your fresh garlic cloves, wrap them in foil, and roast them in the oven at 200 degrees for an hour. The skins will now come right off, and the garlic will have a deep smoky flavor. Add in the baked garlic to your hummus blend. Also add a few rosemary leaves, according to your preference. If you love the taste of rosemary, add more, and for just a complimentary hint, add less. 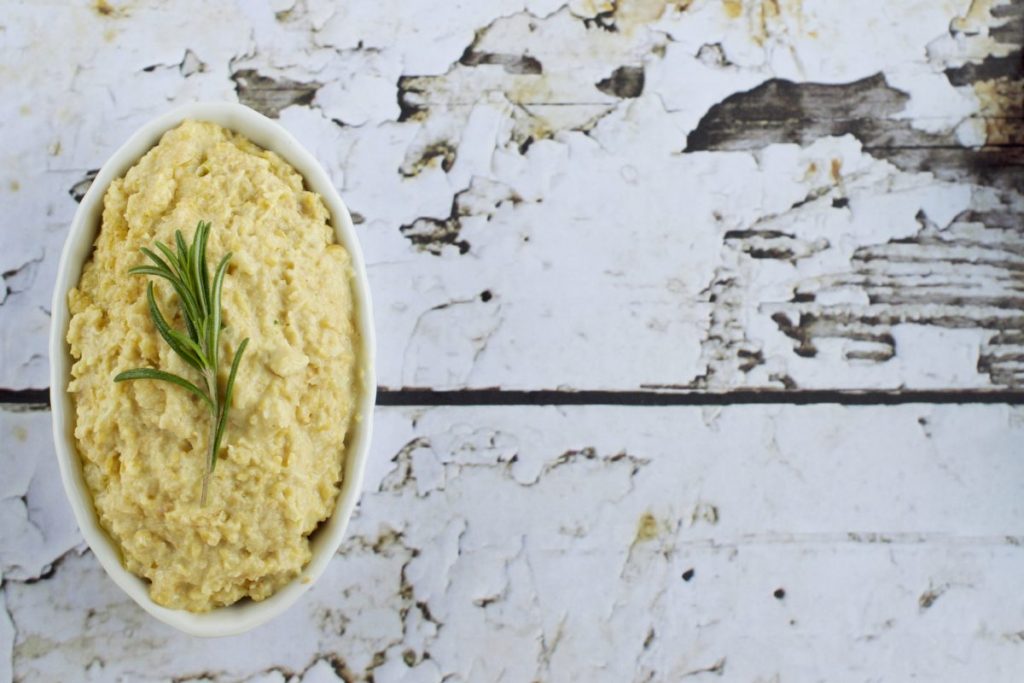 This is an especially good recipe for anyone trying to add healthy vegetables into their diets. Hummus already includes lemon juice, but for this recipe, add a teaspoon of lemon zest to intensify the lemon flavor. When you blend the ingredients, throw in two handfuls of fresh, washed spinach leaves. Save out a few leaves and some lemon peel for an attractive garnish! 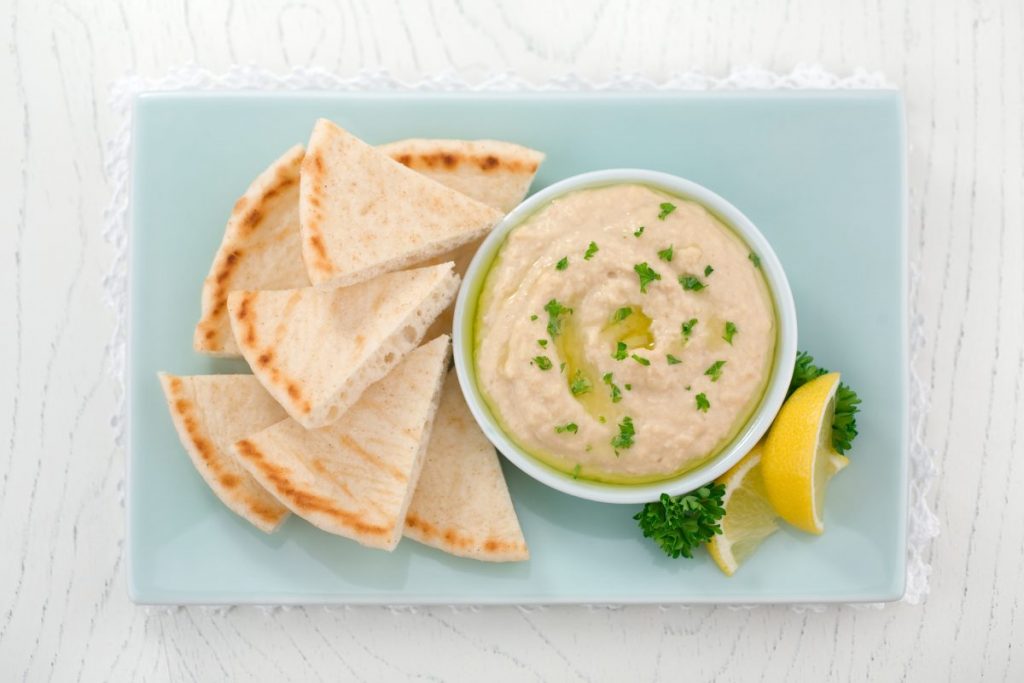 Buffalo flavoring can be found everywhere these days, from wings to marinades. It is actually an excellent flavoring for hummus, and the recipe only requires a few modifications from the basic hummus recipe. Professionals recommend that when making the base recipe, you leave out the 1/4 cup of lemon juice because buffalo sauce already has a sharp tang.

Making buffalo hummus can be as simple as pouring buffalo sauce into the hummus when you process all the ingredients. Other chefs recommend using hot sauce or cayenne pepper sauce, especially if you like your dip spicy! 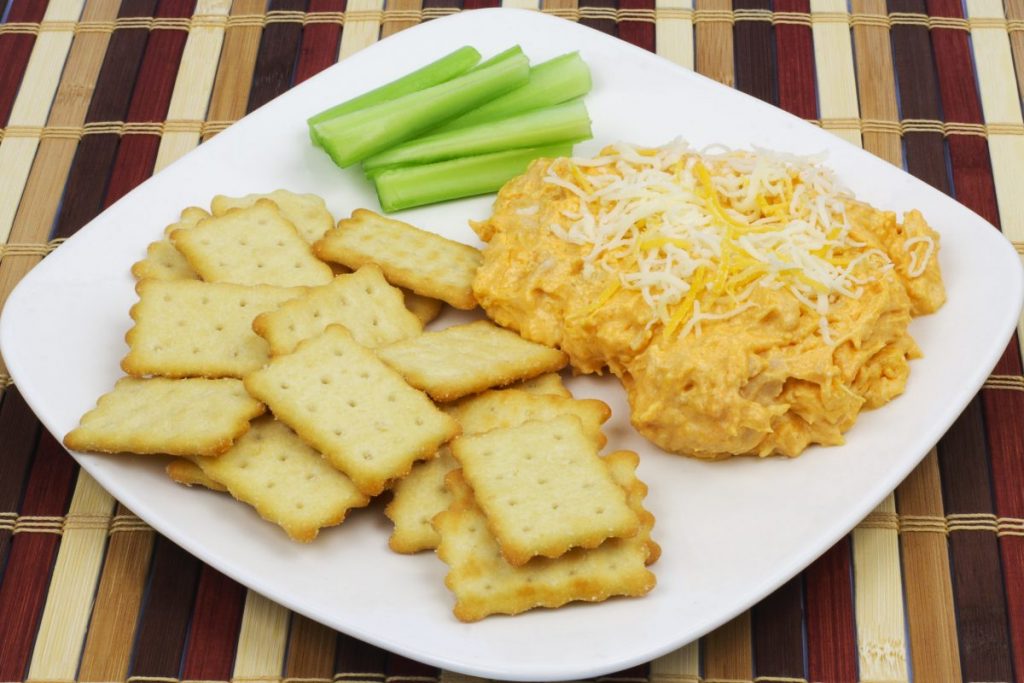 Not everyone is a fan of pumpkin, but those who like it, reallylike it! You can add it to your fall-themed hummus to create a slightly sweet variation on the basic recipe.

It couldn't be simpler to create this flavor of hummus. When you make the basic recipe, simply add a can of pumpkin to the ingredients and puree it in with everything else. At this point you can add some spices--some chefs recommend spicing it up with a quarter teaspoon of cayenne pepper, and others suggest that you can accentuate pumpkin's sweetness with nutmeg or cinnamon. 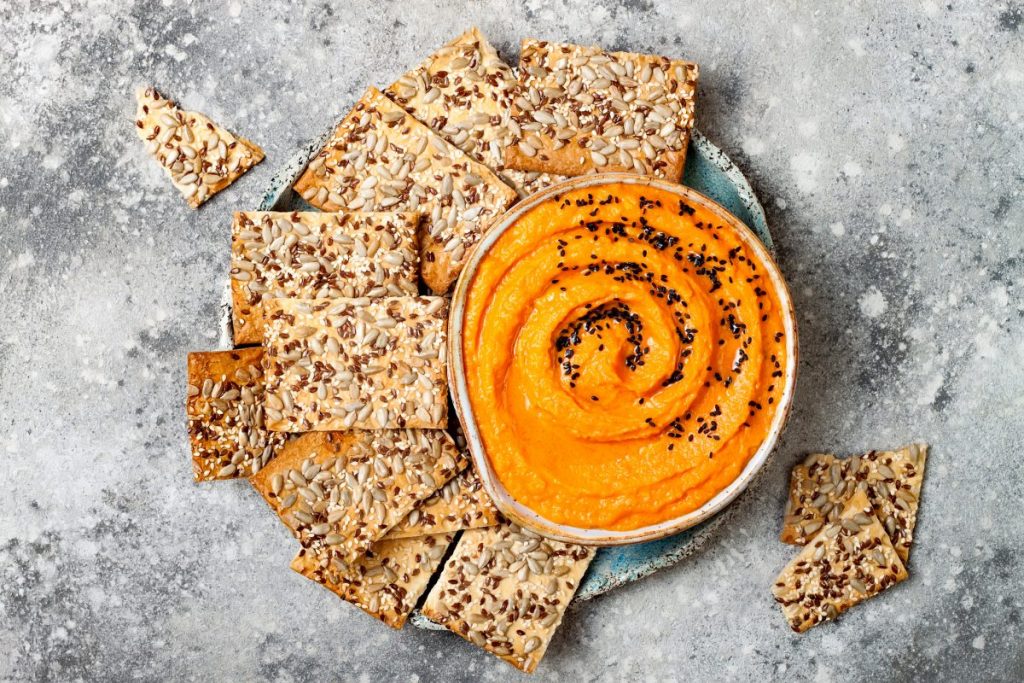 Before you start this tasty recipe, roast the eggplant. This can be done either on the stove in a pan or in the oven. For pan roasting, slice the eggplant into vertical slices, and for oven roasting, cut the eggplant in half, brush with olive oil, and put the halves face down for about 30 minutes, or until the skin darkens and begins to shrink.

To make the actual hummus, set aside one slice of the eggplant for garnish, then scrape the rest out of the peel and into the basic ingredients. Blend the roasted eggplant in with the chickpeas and everything else, and you will enjoy that smoky flavor accenting your hummus! 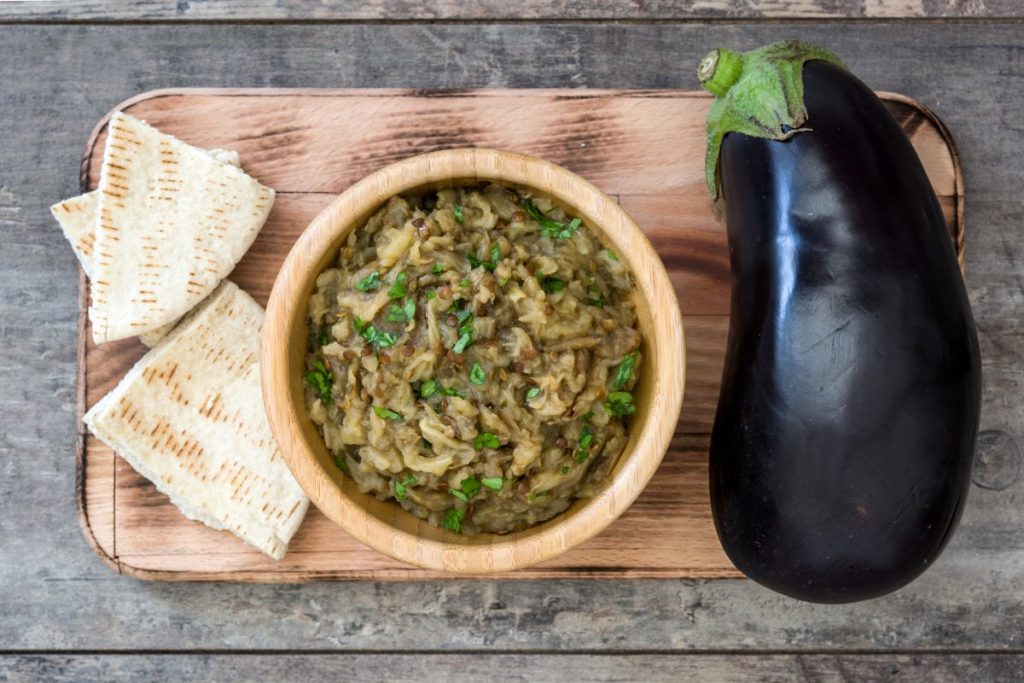 Chipotle refers to a kind of chili pepper with a spicy, tangy kick that is very popular for salsas, sauces, and ingredients in Central American, Mexican, and American Southwestern foods. It's the perfect flavor to add excitement to the basic creamy hummus recipe.

Most chefs recommend that you go right to the source and use chipotle peppers, rather than sauces or mixes. It's okay to buy these in jars, and some chefs actually prefer jarred chipotles preserved in adobo sauce or another sauce. How many you add completely depends on how spicy you want your hummus to be! For a mild chipotle hummus with just a hint of a kick, start by adding just two and then tasting. If you're making chipotle hummus for guests, consider making one batch with just two peppers added, and then another spicier one for those who like it hot! 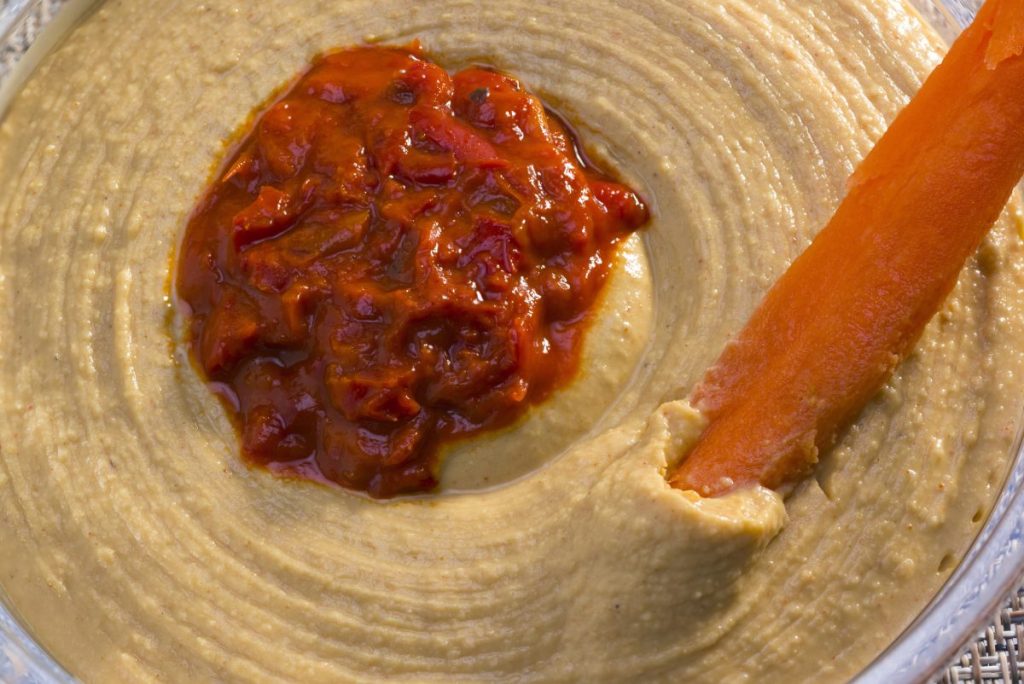 A few years ago, sun-dried tomatoes were everywhere, in everything! While they aren't as much of a craze now, they can still be a rich, flavorful addition to many foods. Hummus is definitely one of those foods!

Before you begin, set aside a tablespoon of your sun-dried tomatoes to put on your final dish as a colorful garnish. The basic recipe will be the same, but several chefs recommend that you blend all the ingredients, including the tomatoes, before you add the chickpeas, for the smoothest, creamiest final result. 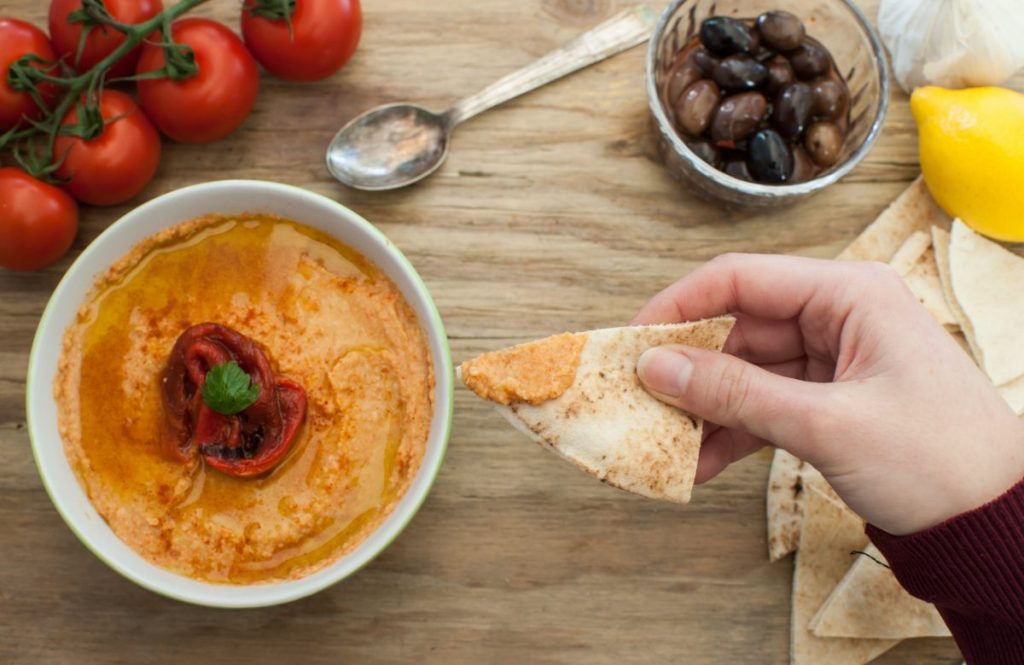