Some people love brussels sprouts; others avoid them altogether. But these little nutrition-packed, low-calorie, green bundles have been a part of the human diet since Roman times. Some cooks say they dislike that people have for brussels sprouts is due to the cooking method. Traditionally, people boiled them until they were squishy and tasteless. Instead, try roasting, sauteing, frying, steaming, pan-searing, or braising them for a delicious side dish, a mouth-watering appetizer, or a tasty main attraction.

Brussels sprouts grow on a long stem. The buds are the edible part of the plant. In most cases, they are removed from their inedible stems before they reach the supermarket. This cold-weather vegetable requires a longer growing season than many other vegetables. Its season runs from late-September through February, but they shouldn’t be picked until after the first frost. 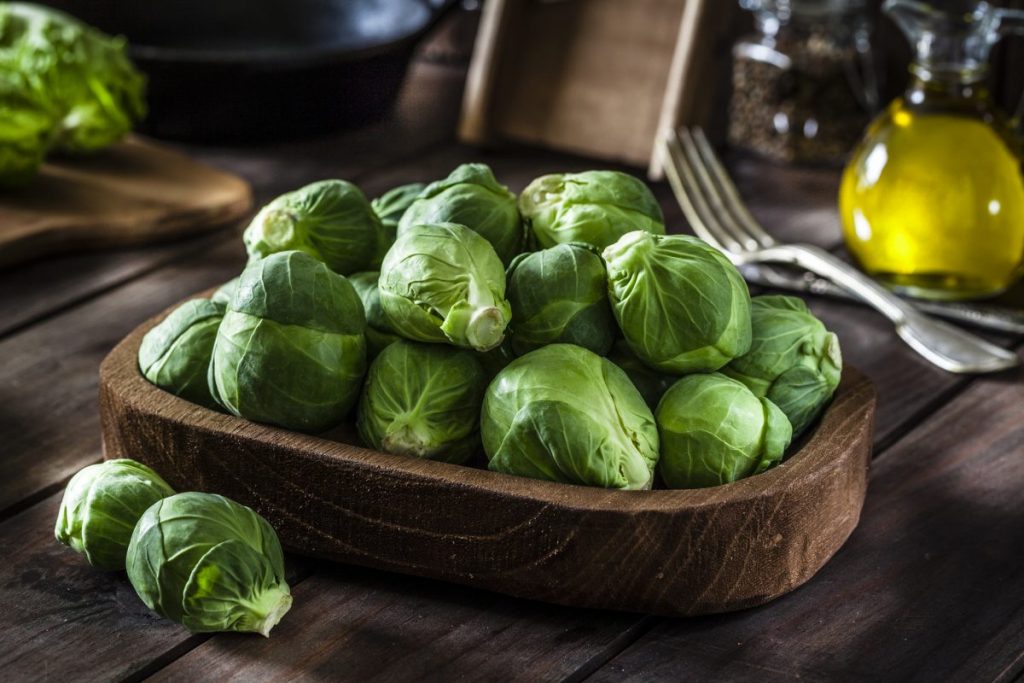 Wash fresh brussels sprouts thoroughly in cold water before cooking. Pat dry after washing. Trim off the stem ends. Generally, cooks leave the smaller buds whole but cut the larger ones into quarters or halves. If you don’t plan on cooking them right away, store brussels sprouts in a resealable bag in the refrigerator’s vegetable drawer for up to a week and a half. Brussels sprouts lose their color and texture if they are cooked ahead and served later. 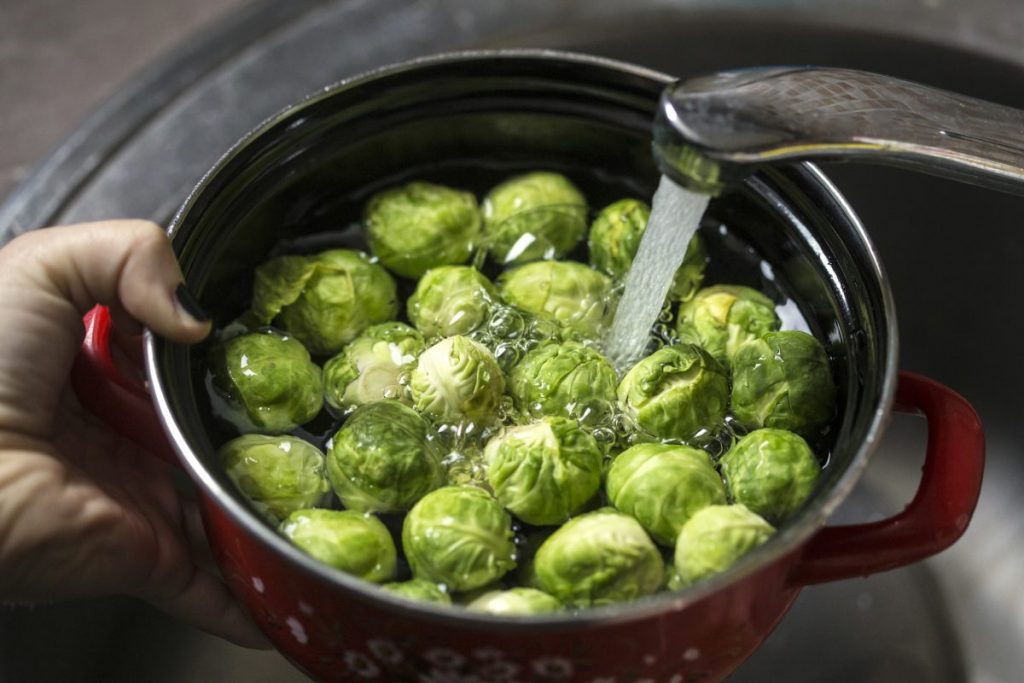 This method of preparation tops the list for brussels sprouts fans. First, cut larger sprouts into quarters and smaller ones into halves. Toss with olive oil, and season with salt and pepper. Spread onto an edged baking sheet, but give each one some room. If they are too close together, the water in the brussels sprouts will create steam, and they won’t achieve the desired crispiness. Roast in a 450-degree oven for about 25 to 30 minutes, and remember to turn them every 10 minutes or so. When done, the outer leaves should look a bit charred, but the insides are tender. For variations, toss with brown sugar or honey before roasting. Or, sprinkle bacon pieces over the sprouts for even more flavor. Cook until the bacon is crisp and the sprouts are golden-brown. 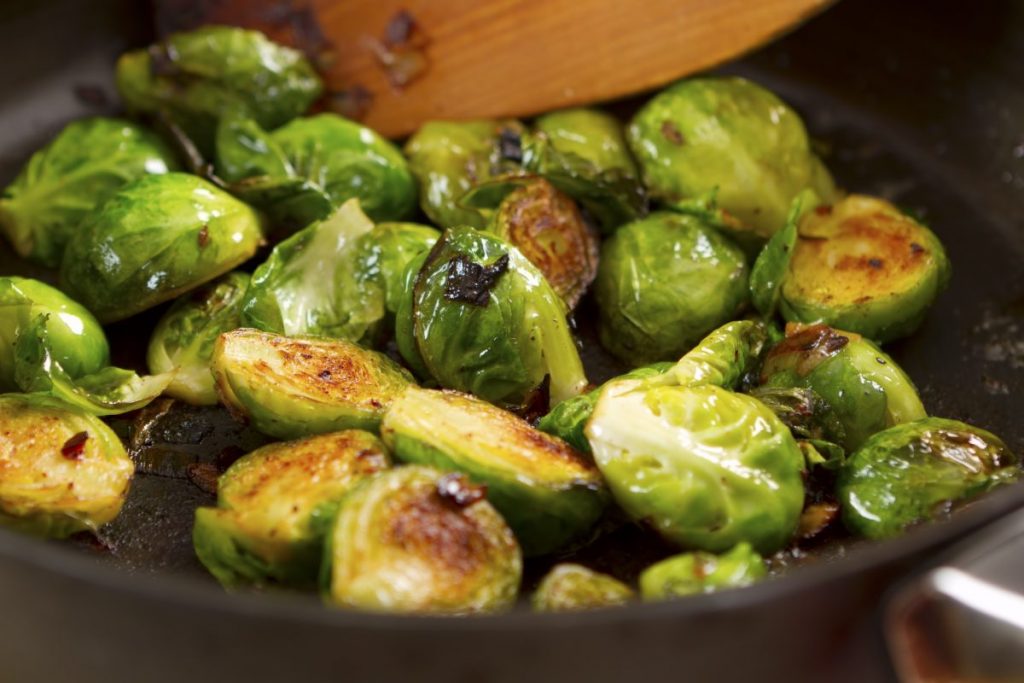 The beauty of sauteing these little green gems is how easy it is to create an elevated dish with just a few ingredients. Brussels sprouts are delicious when cooked with bacon, sausage, chorizo, schmaltz, or with olive oil. Remember to use a large skillet to allow plenty of room for the brussels sprouts to brown instead of steam. If you’ve chosen a meat to partner with the sprouts, brown it first before adding the sprouts, remove it, and cook the brussels sprouts in the rendered fat. Always shake the skillet instead of stirring to allow the buds to caramelize. Cook for about 5 to 8 minutes. Add the meat bits back in just before removing the pan from the heat. 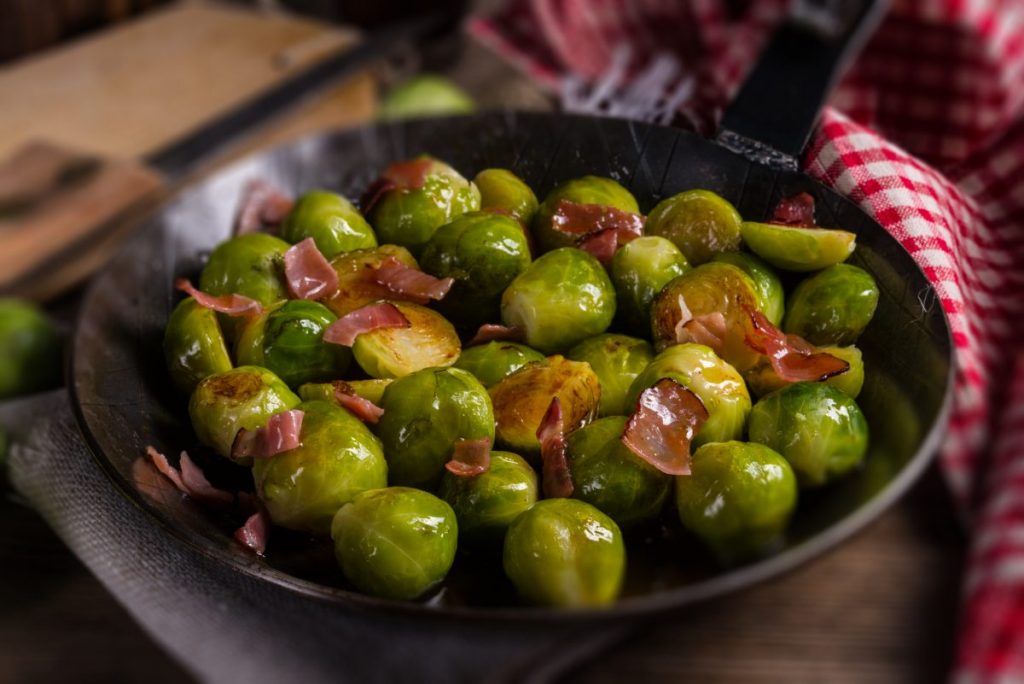 Most gratin dishes create an image of a dish with cheese. However, the word gratin also refers to a dish with a browned topping. Gratin brussels sprouts can have both. One of the most delicious methods is a bit more time-consuming, yet it yields a savory, creamy, decadent dish. Roast the brussels sprouts at 450 degrees, but only for about 15 minutes. They’ll still be somewhat firm and bitey. Pour cream over the top. Add onions if desired. Sprinkle with white cheese. Cheddar or Fontina works well in this dish. Cook in the oven for another 15 minutes. Toss some bread crumbs with olive oil, sprinkle across the top, and bake for an additional 5 minutes. Remove from the oven when the top is golden brown and serve immediately. 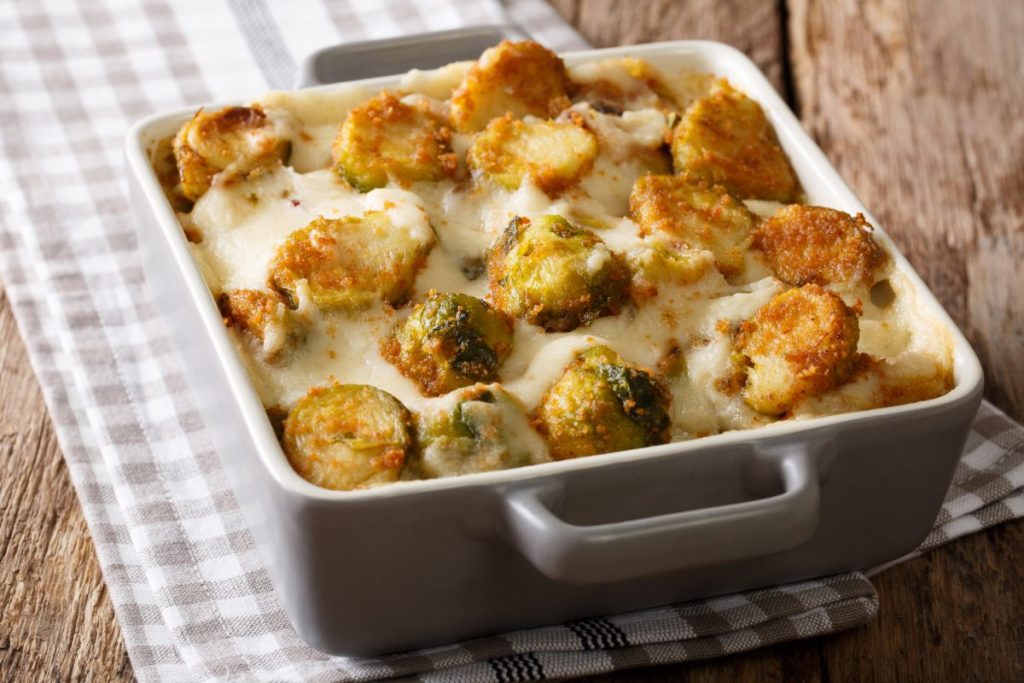 Pairing With Other Vegetables

Home and professional cooks love brussels sprouts because of their versatility. Whether your goal is a showy holiday dish, a hearty side, or a lighter, healthier way to add veggies to your diet, brussels sprouts offer a long list of options. Pair them with other vegetables to create a flavorful masterpiece. Roast them with wild mushrooms, parsnips, shallots, squash, or rutabagas. Top a baked sweet potato with your favorite roasted brussels sprout recipe. Combine with cauliflower in a gratin dish to create a unique and flavorful new family favorite. 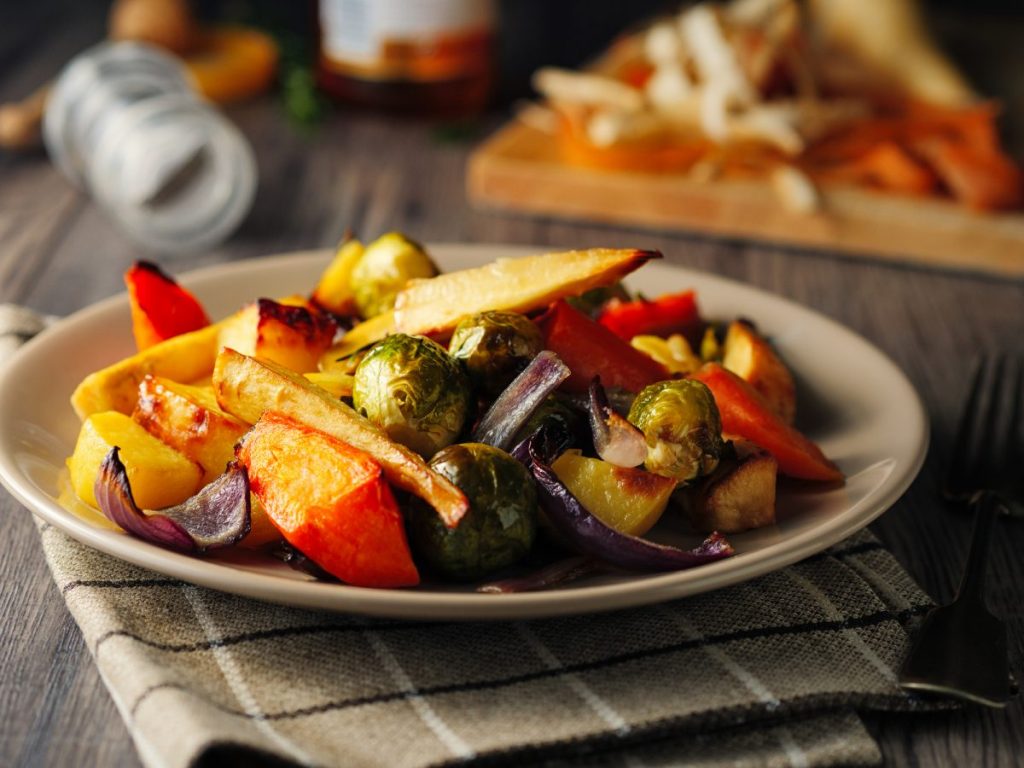 Combine With Fruit and Nuts

Many cooks add fruits or nuts to dessert dishes. But these ingredients are just as delicious when added to cooked vegetables. Pears, apples, pomegranates, and cranberries create new and intriguing flavors to roasted brussels sprout recipes. Combine sauteed brussels sprouts, grapes, and balsamic vinegar for a delicious, eye-pleasing side dish. Squeeze in orange or lemon juice and toss with olive oil before roasting. Chopped walnuts, pecans, pine nuts, or whole roasted hazelnuts elevate the flavor profile of just about any brussels sprout recipe. 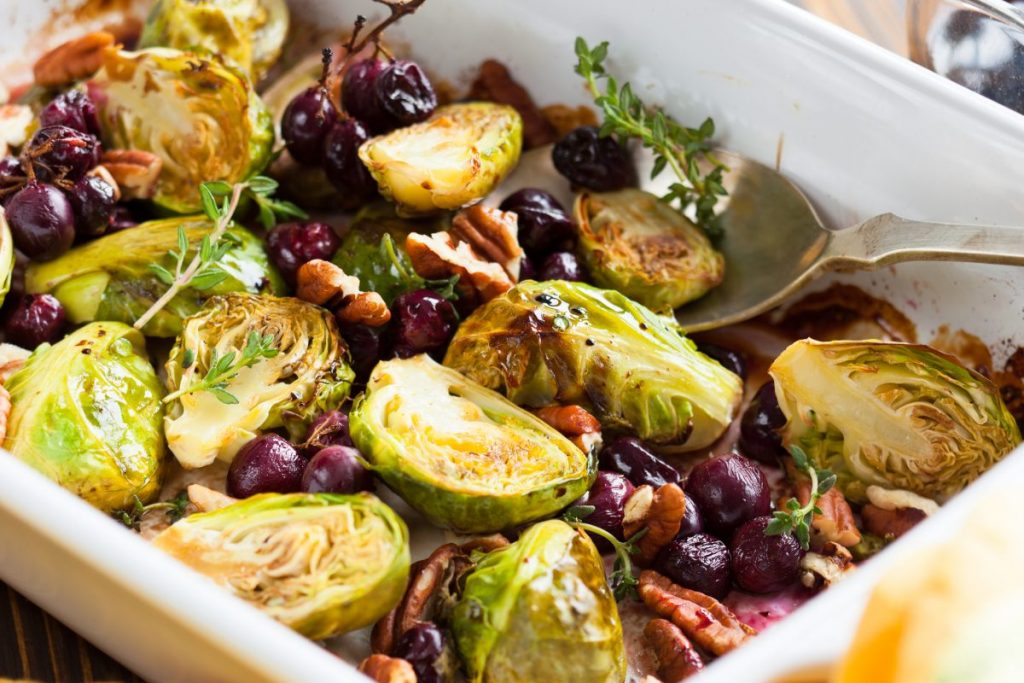 Brussels Sprouts: Not Just for Dinner

If you’re looking for new sandwich ideas, brussels sprouts are an ideal choice. Grilled cheese lovers will adore this version with cooked bacon, white cheddar cheese, and thinly sliced, sauteed brussels sprouts. Cook the sprouts until they are a bit wilted, but not crispy. Remove them from the heat. Toss with lemon zest and black pepper. Layer the shredded cheddar, the cooked brussels sprouts, and then the bacon pieces on a slice of bread. Repeat the layers. Top with another slice of bread. Place the sandwich in a heated pan in 1 tablespoon of melted butter. Cook both sides until they are golden brown. For a variation, add some sauteed mushrooms as an additional layer. 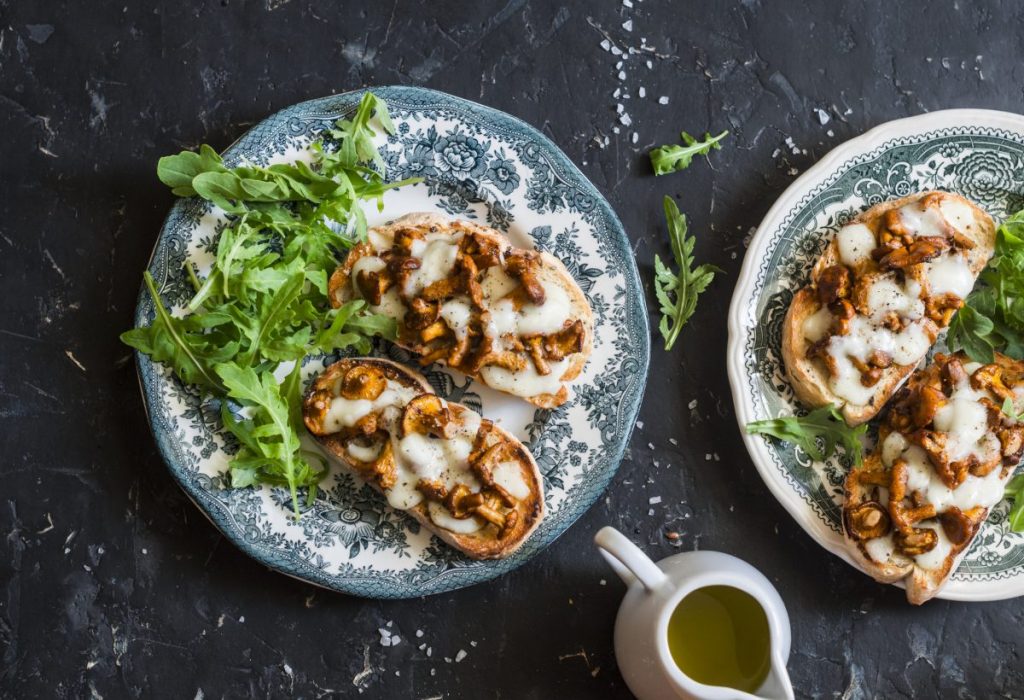 Saute some brussels sprouts with onions in butter, then toss with some tortellini and lemon zest for a quick-and-easy, yet healthy meal. Try sauteing the brussels sprouts in garlic butter, and add it to the cooked pasta of your choice, along with some shredded mozzarella and serve immediately. For those who choose vegan or dairy-free diets, substitute a vegan cheese instead. Add some pancetta, mushrooms, jalapenos, or other favorite ingredients for a flavorful twist. 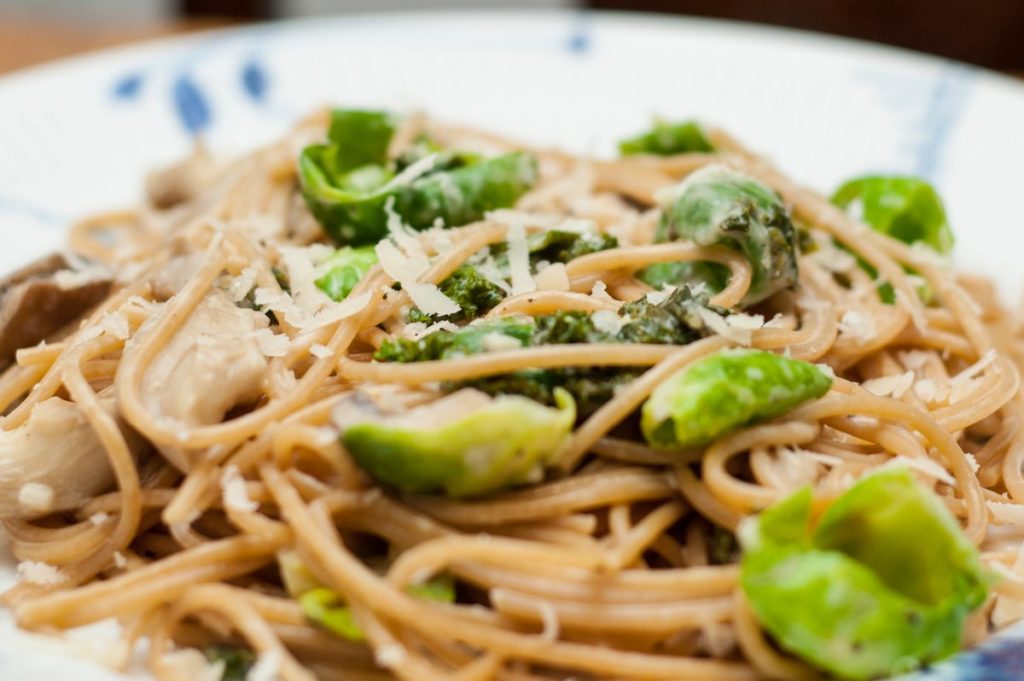 Brussels sprouts are a member of the cabbage family and are a delicious option for slaws and salads alike. Peel and section an orange. Save some of the sections and squeeze the juice from others into a bowl. Add olive oil, some pomegranate arils, shallots, salt, and pepper. Whisk the mixture. Then, add thinly sliced brussels sprouts, the remaining orange sections, and sliced avocados. Toss to coat. For another slaw variation with an Asian twist, shred raw brussels sprouts and carrots, add in some almonds, and toss with a soy-honey dressing. 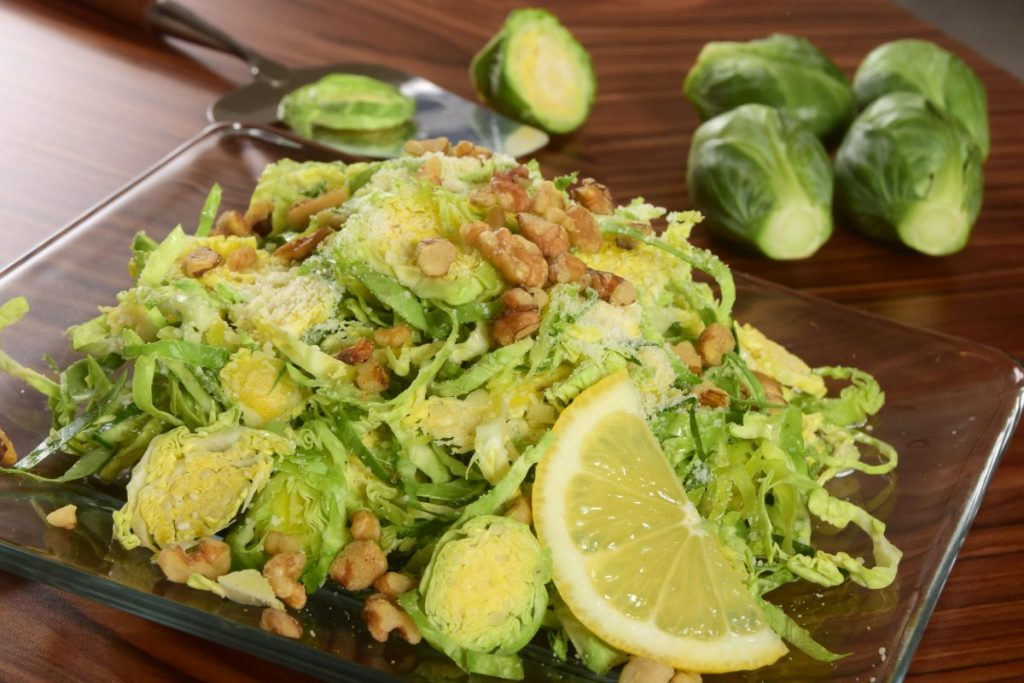