Eggplant is an amazing vegetable that, unfortunately, many people still struggle to cook. The vibrant plant can be found in many Mediterranean, Middle Eastern, and Asian dishes, and it’s popular for its versatility, flavor, and texture.

Eggplant is a low-calorie food that’s high in fiber and rich in many essential vitamins and minerals. From creamy baba ghanoush to a smoky vegetarian bacon alternative, these eggplant recipes show off just how delicious eggplant can be.

This classic dish is always a hit. Slices of eggplant are fried until golden brown and crispy before being topped with marinara sauce and cheese.

To make this recipe, cut a large eggplant into ½ inch-thick round slices. Sprinkle these slices with salt and let rest for 30 minutes so that extra moisture and bitterness is removed. Set up two bowls; one with beaten eggs and one with breadcrumbs. Dip the slices in the egg and then in the breadcrumbs. Once coated, fry the slices in a pan until the eggplant is brown and tender.

Cover a casserole dish with one cup of marinara sauce. Put down one layer of eggplant slices over the sauce and top with mozzarella and parmesan cheese. Continue layering marinara, eggplant, and cheese until you’ve used all of the eggplant. Top the dish with more cheese and bake for about 20 minutes. 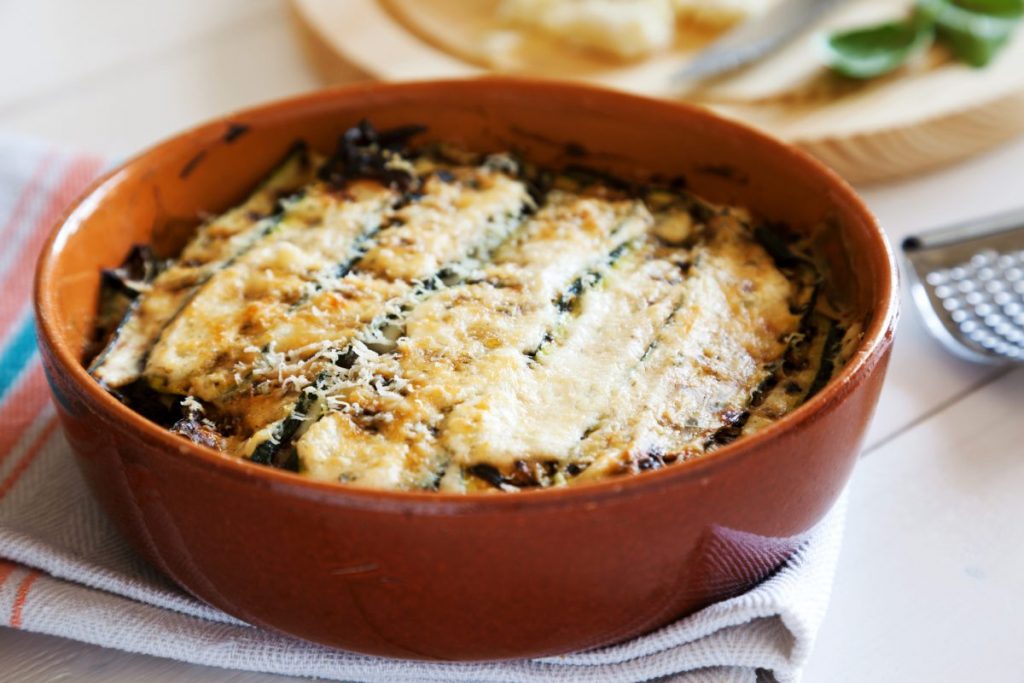 Baba ghanoush is a creamy, smoky dip made from eggplant, garlic, and tahini. It’s flavorful and just as easy to make as hummus!

Blend the mixture and add extra virgin olive oil until the mixture is creamy. Stir in salt and pepper to taste. Garnish with parsley and serve with falafel, pita bread, or carrot sticks. 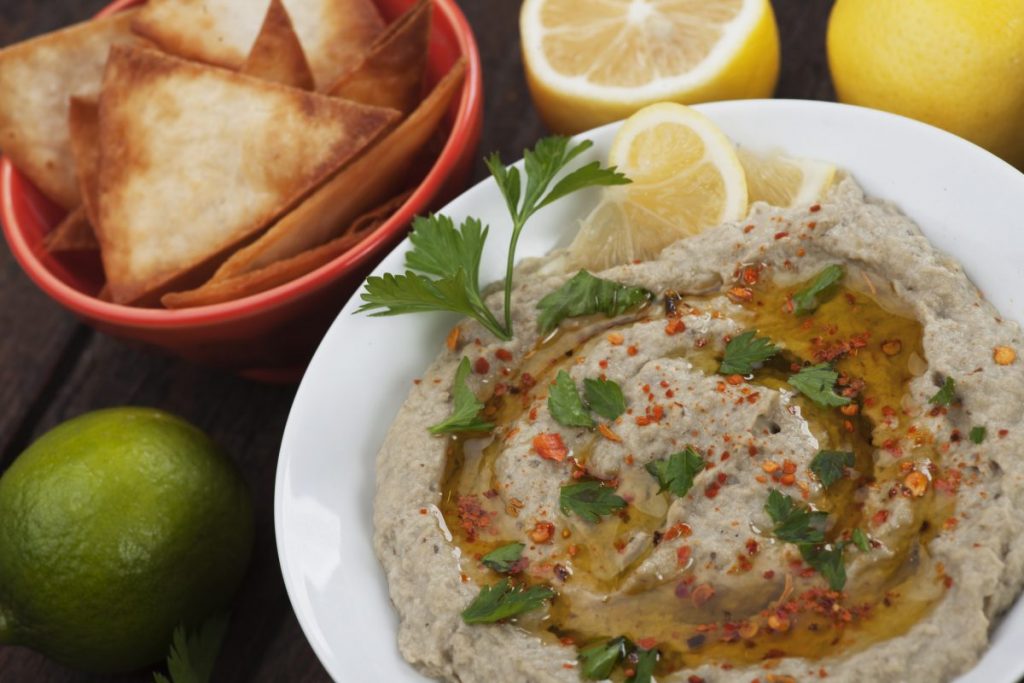 This eggplant casserole is similar to lasagna, but it features slices of eggplant and potatoes in place of lasagna noodles. To make this layered dish, slice a large eggplant lengthwise and roast with salt and olive oil. In a separate pan, make a spiced ragù using onions, ground beef, oregano, cinnamon, nutmeg, paprika, and red wine. While the ragù is cooking, boil thin slices of peeled potatoes until tender. In a casserole dish, layer the ragù, eggplant, and potato slices until you run out of the ingredients. Top the dish with a cheese mixture of feta and mozzarella. Bake for about 20 minutes, or until cheese is brown and bubbly. 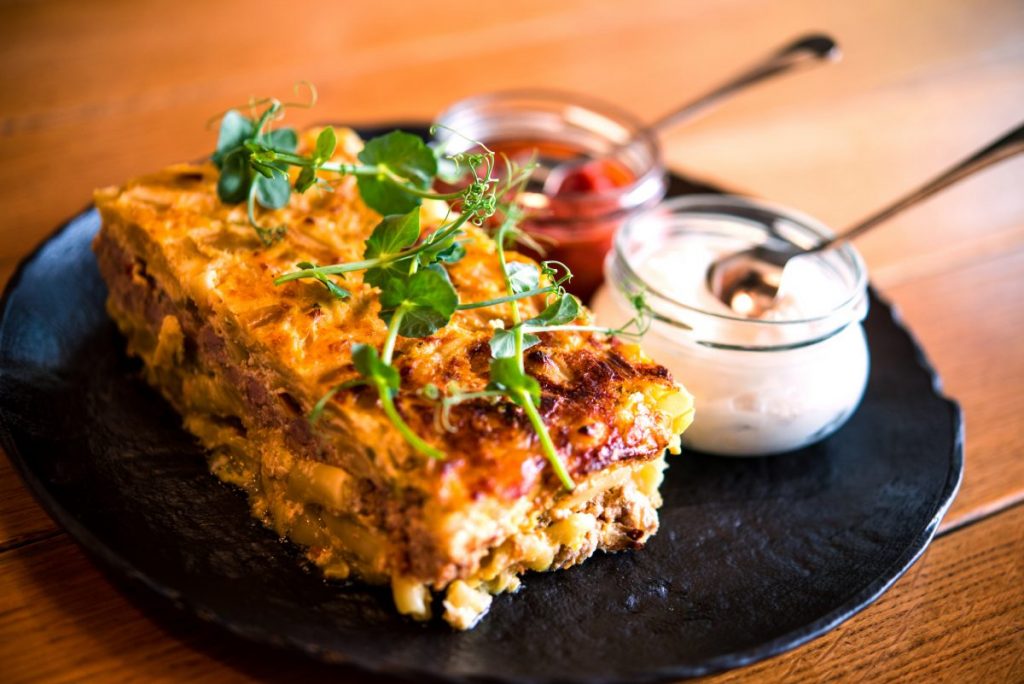 To make this dish, cube one eggplant and roast at 350 degrees Fahrenheit with olive oil and salt until tender. While eggplant is roasting, sauté diced onion, zucchini, bell peppers, garlic, and tomatoes until vegetables are tender. Add eggplant to the vegetables and stir in fresh thyme, oregano and basil, tomato paste, extra virgin olive oil, and a splash of balsamic vinegar.

Serve this dish hot or chilled with a thick slice of crusty bread on the side. 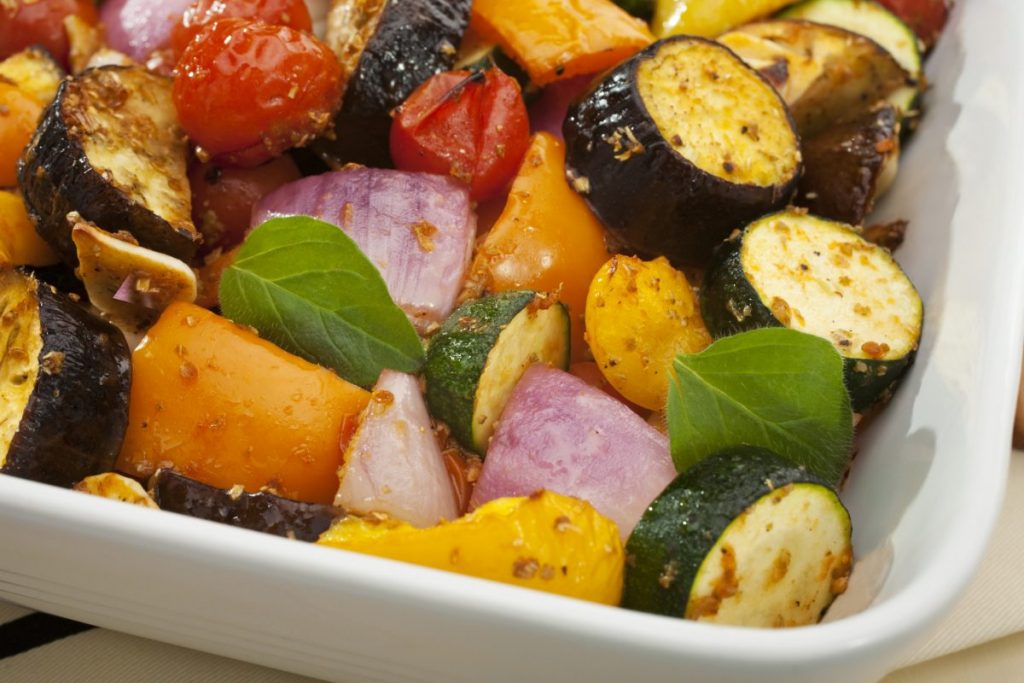 Eggplant halves are roasted before being stuffed with a delicious mixture of ground beef, garlic, herbs, and cheese. Slice a large eggplant in half, cover it in extra virgin olive oil and sea salt, and roast it until tender. While the eggplant is cooking, sauté onion, garlic, red pepper, and ground beef in olive oil with fresh parsley, basil, and chopped tomatoes. Stir in breadcrumbs, parmesan cheese, one egg, and the flesh of the cooked eggplant. Combine ingredients thoroughly and scoop mixture into eggplant halves. Bake the stuffed eggplant for 50 minutes at 350 degrees Fahrenheit. 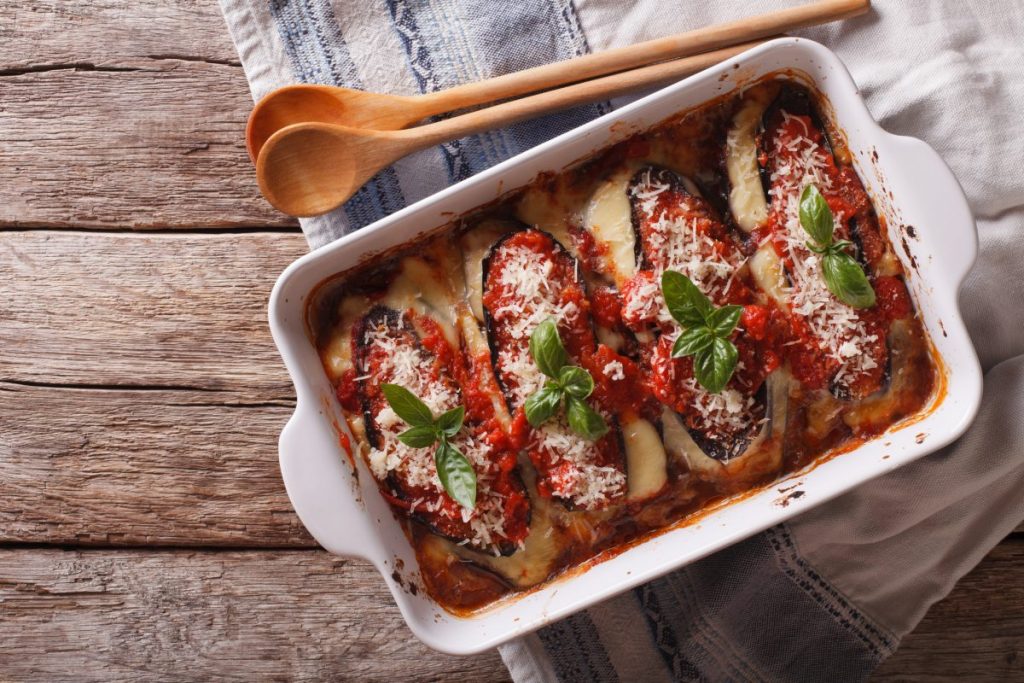 Who knew eggplant could be a great bacon substitute? This recipe is smoky, salty, and will easily convert the nonbelievers.

Cut one eggplant into thin half-moon slices. Coat the slices in olive oil and salt and bake at 425 degrees Fahrenheit for eight minutes. Flip the eggplant and bake for three more minutes. While the eggplant is baking, make the smoky dip by combining a quarter cup of soy sauce with one teaspoon of liquid smoke in a small bowl.

Take the eggplant out of the oven and dip each piece in the sauce. Lower the oven to 350 degrees Fahrenheit and bake the eggplant slices for five more minutes, or until dark brown and tender. Add these to your favorite salads and sandwiches. 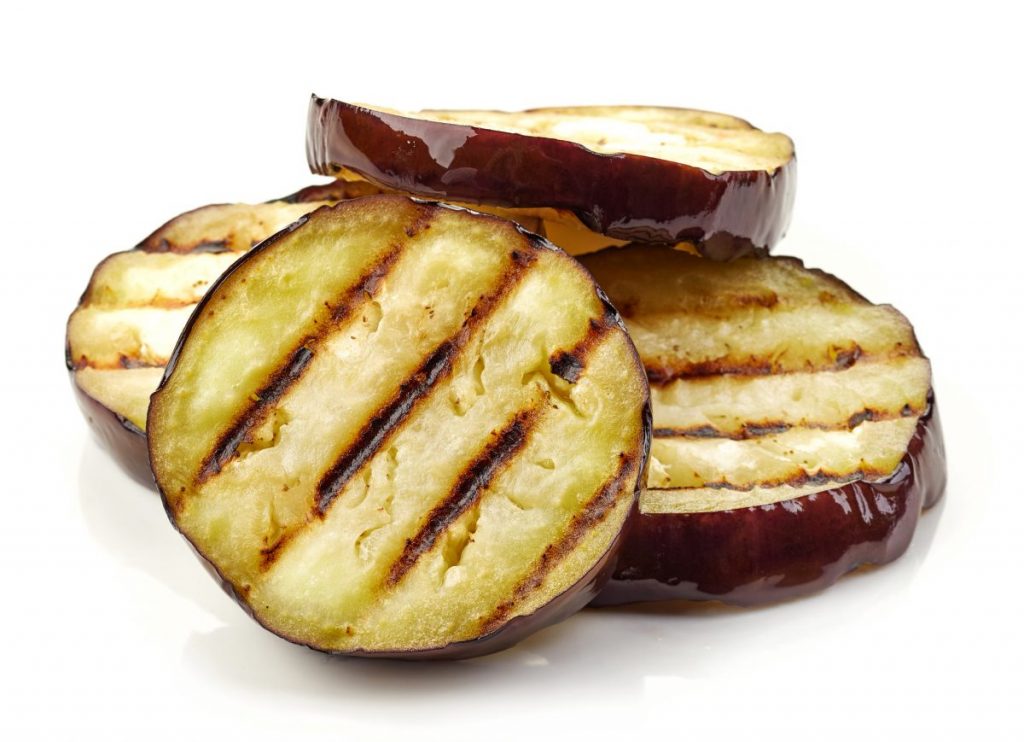 Once the sauce has been made, sauté cubed eggplant in sesame oil with fresh ginger, garlic, and ground Szechuan peppercorns. Add more oil as needed and cook eggplant until brown and tender. Pour the sauce over the eggplant and simmer until thick. Serve this over brown rice on a cold day, and it will instantly become one of your favorite meals. 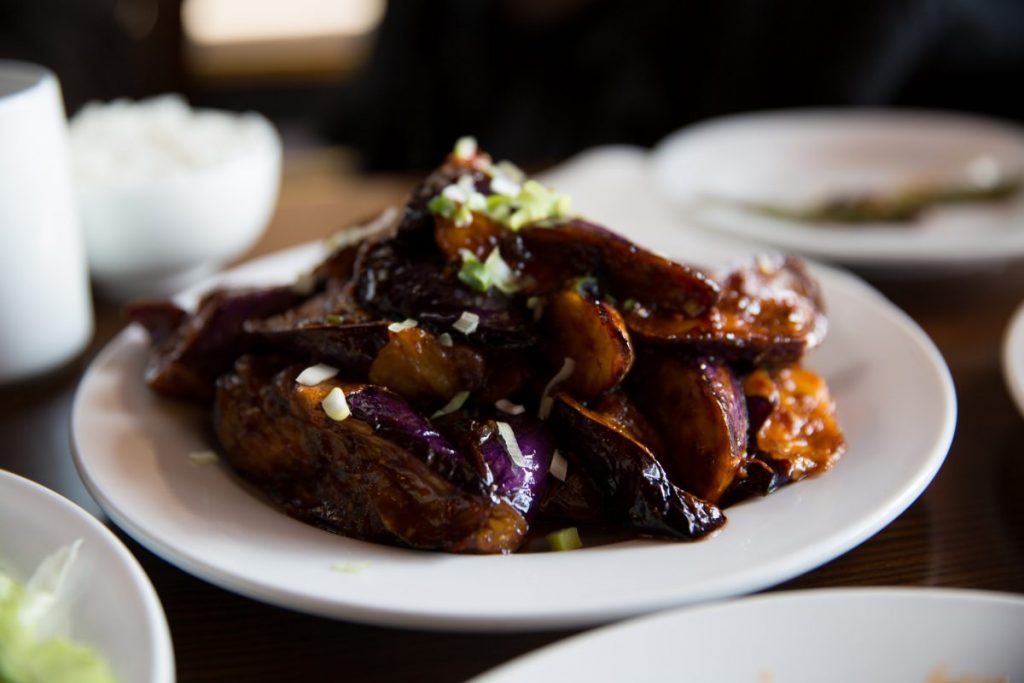 This popular North India dish showcases everything eggplant has to offer. Start this dish by coating a whole eggplant with olive oil. Cut three slits in the eggplant and insert three cloves of garlic. Roast the eggplant and garlic together until eggplant is very tender.

In a pan, sauté onion, garlic, ginger, and green chili. Deglaze the pan by adding chopped tomatoes. Mash the roasted eggplant and garlic and add it to the pan. Cook on low heat for about five minutes before removing from heat and adding fresh cilantro. Serve this dish with basmati rice and fresh roti. 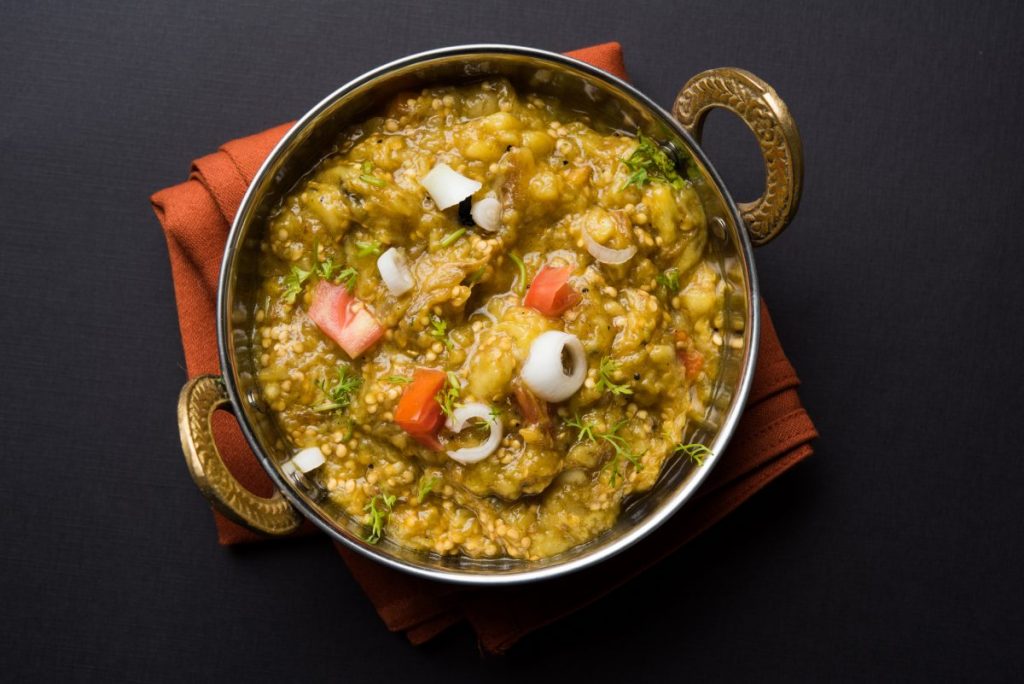 Miso grilled eggplant just might be the easiest recipe you will ever find, and it’s great for grilling season! Slice a large eggplant lengthwise into thick slices. In a glass bowl, combine mirin, cane sugar, white miso, sesame oil, and grated fresh ginger. Coat the eggplant in olive oil and roast for about 20 minutes or until the eggplant is tender. Pour the miso sauce on the eggplant slices and allow the eggplant to marinate until you’re ready to grill, but at least for 30 minutes. Grill eggplant until golden and caramelized. Top with sesame seeds and enjoy warm! 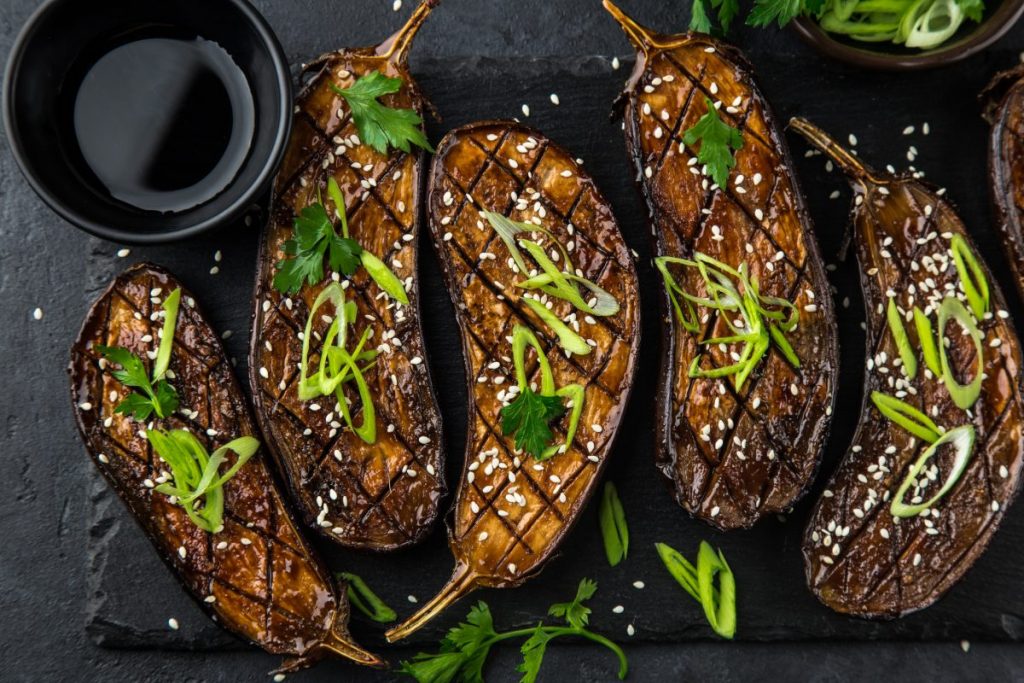 Caponata is a sweet and sour Sicilian take on ratatouille. This vegetable salad can be eaten warm or cold and is best served as crostini. 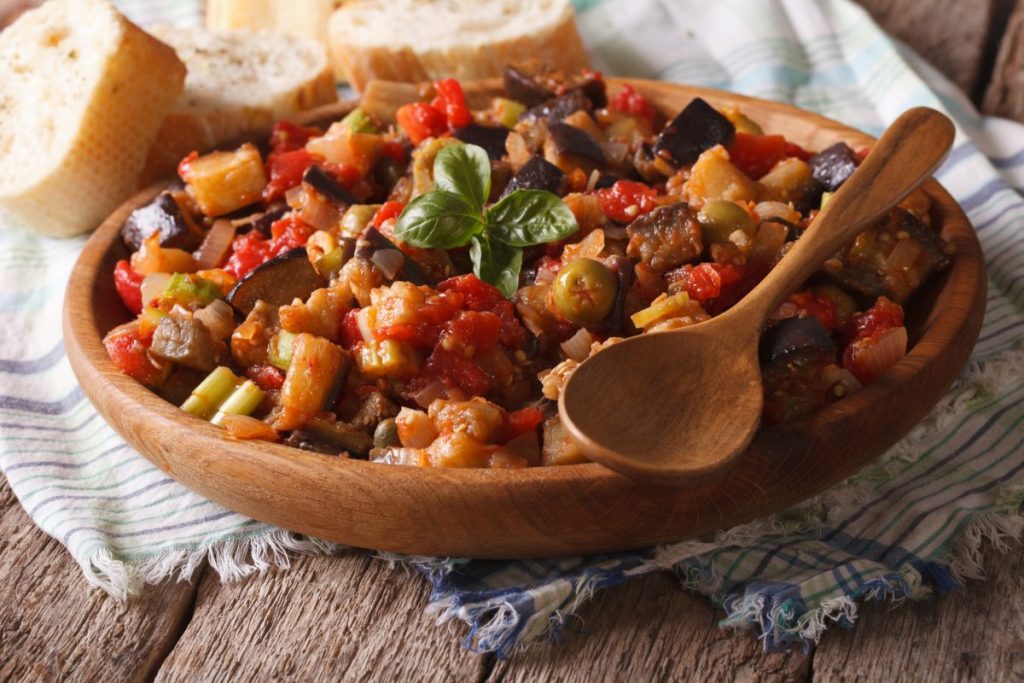