A Bow Tie Can Be Tricky, But They Are Manageable

The bow tie is not going anywhere, and recent use suggests that it's for a good reason. Whether or not you're a popcorn magnate in your iconic bow tie and horn-rimmed glasses or an in-shape college professor looking to be ironic in your next lecture, there remains a place for the bow tie. The bow tie has undergone a transformation; it's no longer solely used by academics with tenure.

Rather than "He needs a makeover." instead people now largely say things like "he wears that well." That doesn't make them easy to tie. However, with these tips, a bit of explanation and a fair bit of trial and error you'll get there. Trial and error, while negative sounding is stressed there because, quite simply, you'll likely not get it worked out on your first attempt.

What Is This Bow Tie?

It takes an absolute lack of confidence or mommy issues to wear a bow tie without the pomp and circumstance they deserve.

(Please understand that we know that women can wear, and even look great in a bow tie and that the tying instructions are identical regardless of gender. However, there may be times that the writing skews to men come instruction time.) The bow tie has a fascinating backstory dating back to the Prussian Wars with a little help from the French. As exciting as history can be, tying a bow tie is far from easy, and it's better to concentrate on that. 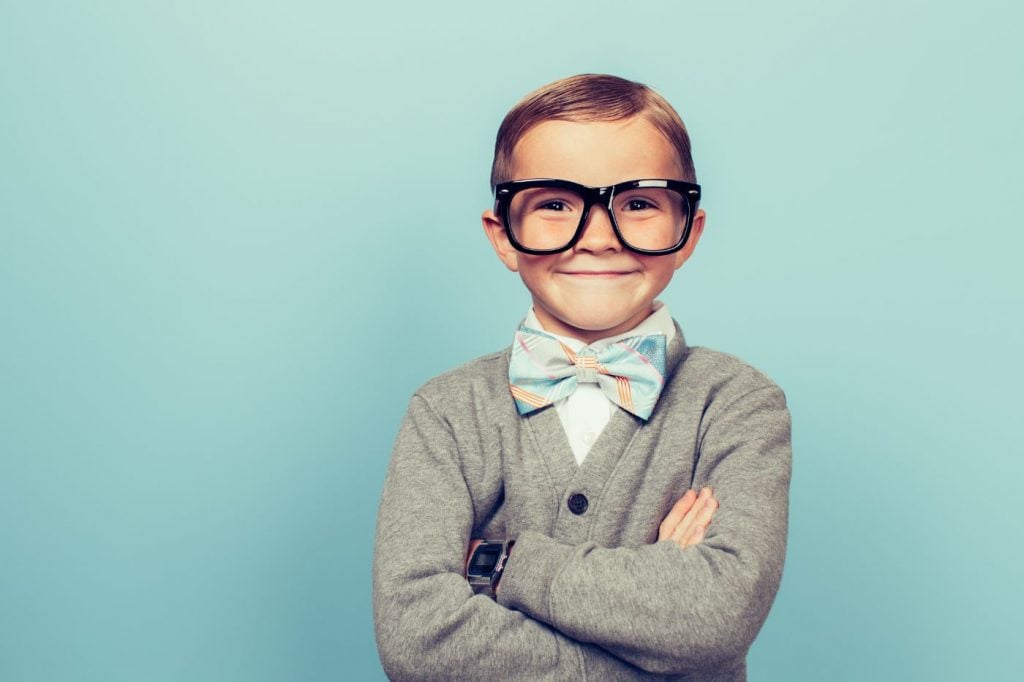 If you're old enough to read and are reading this, you have absolutely zero interest in a clip-on bow tie. Clip-on bow ties are for children. Getting a small child to cooperate through the process of tying one is tantamount to herding cats. That's it. Chances are you won't even graduate to a pre-tied bow tie in the future if ever these bow ties were ever foisted on you.

And, it's difficult to say for certain that you would be wrong to want nothing to do with a bow tie for the remainder of years you have on this planet outside of black tie events. 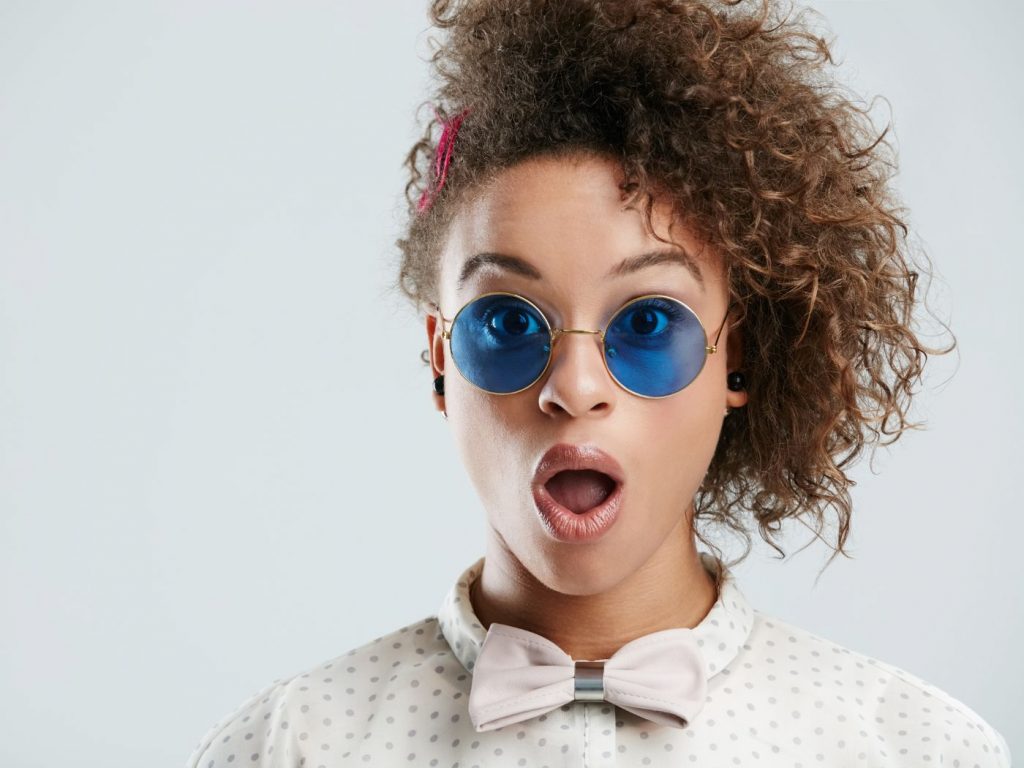 A Bit Better, But Still No!!

The pre-tied bow tie is a bit better, but if you think that's something you can rock out you're very much mistaken. Firstly, they are just too perfect; they have no soul.

If you think someone is about to punch you in a bar fight while wearing a pre-tied bow tie, know that 98 out of 100 times they will lead with a punch thrown with the same hand as they hold their drink.

Effectively, stop reading this article now. You won't need it any more than you'll ever look as good as George Clooney before he ties his up in record time. 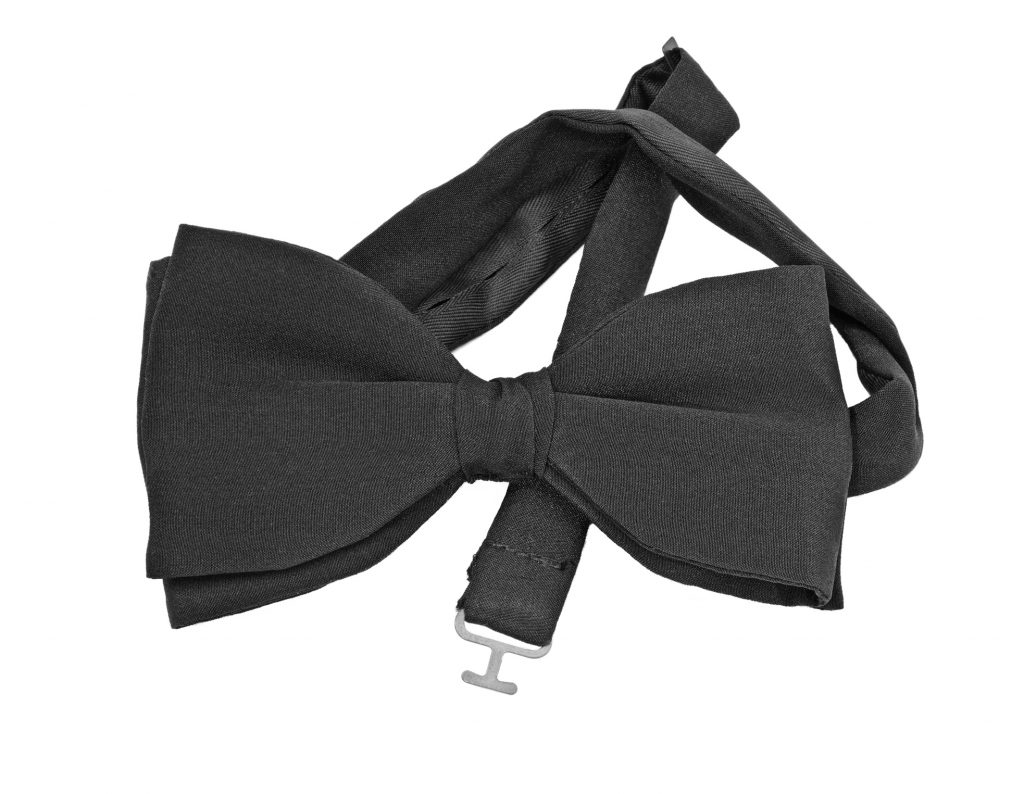 You don't have to own a haberdashery to recognize that this is the only way to go on this one. This is a statement. This means you care and the bow tie you are wearing is most certainly not the only bow tie your own.

This is a coming of age accessory for many an occasion. Even if you only don a bow tie for formal occasions, well, at least you're getting invited to formal occasions. Next step... tuxedo ownership. 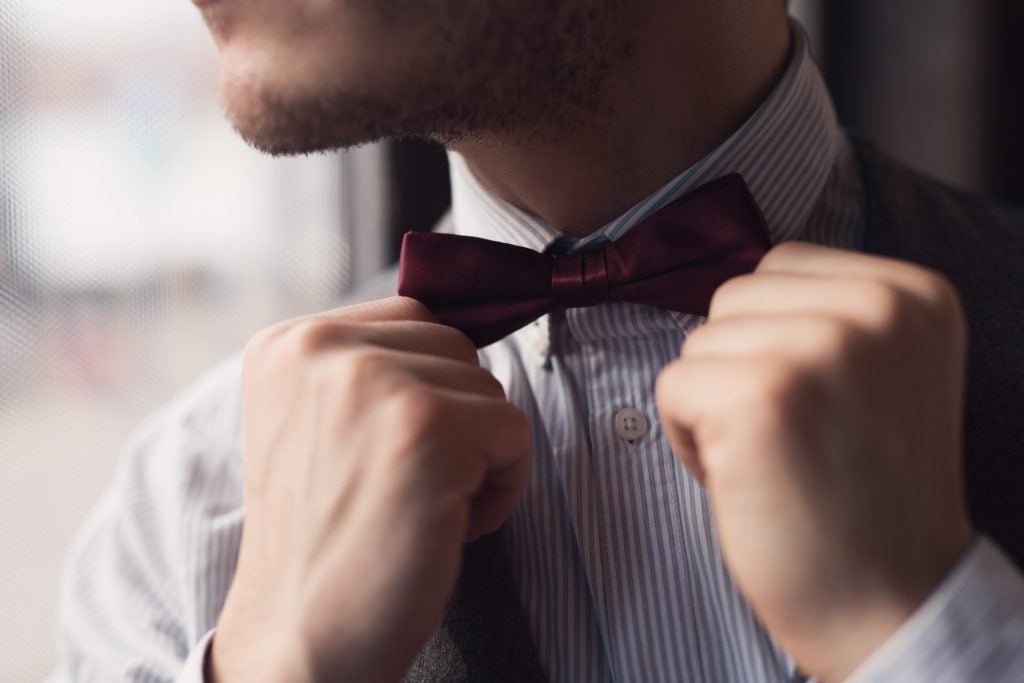 Close-up of an elegant man fixing his bow tie.
Advertisement

There is No "One" Bow Tie

Bow ties are not as addictive as say, social media, but for many, once you start, it becomes increasingly difficult to stop. Especially if you love sharing selfies of your bow ties.

While there are more than these four variations, this takes care of the lion's share of the list.

The classic bow tie is just that, classic. There is no one occasion that it's ill-suited to join you. Hell, again, it's a classic.

Measuring 3" to 3.5" the large butterfly bow tie is for the larger face/neck individual or someone purposefully looking to act the fool and draw attention.

The "Batwing" bow tie goes the other way with a height of roughly 1.5" to 2". It's slicker, "less is more" does still draw attention to the wearer who in a perfect world has a smaller neck size or longer more slender face. 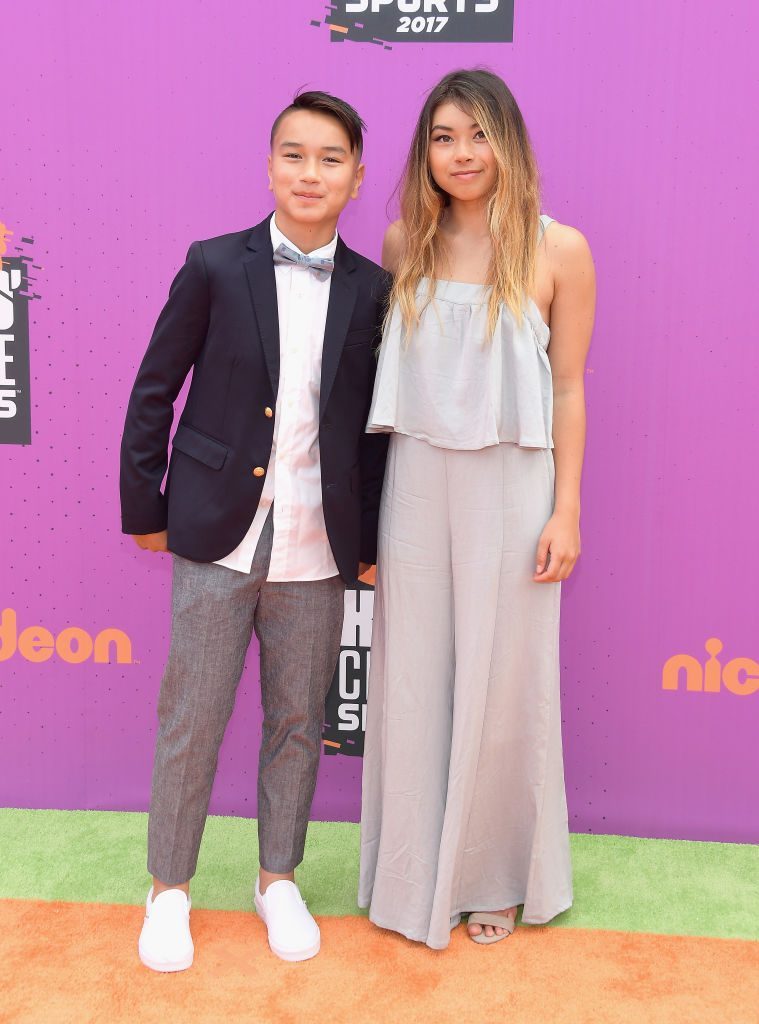 Tie Your Shoes And Forget Everything About That While Remembering Everything

This might sound truly ridiculous, but it makes perfect sense. Tying a bow tie is identical to tying your shoes with the understanding that it's nothing like tying your shoes unless you jump into your shoes to tie them. Oh, you also don't make a full loop with your bow tie. Other than that, the same.

The first and most important thing to remember is that once the tie is around your collar the side that you will start with should be a bit (roughly an inch) longer once it is passed beneath the other side of your tie. 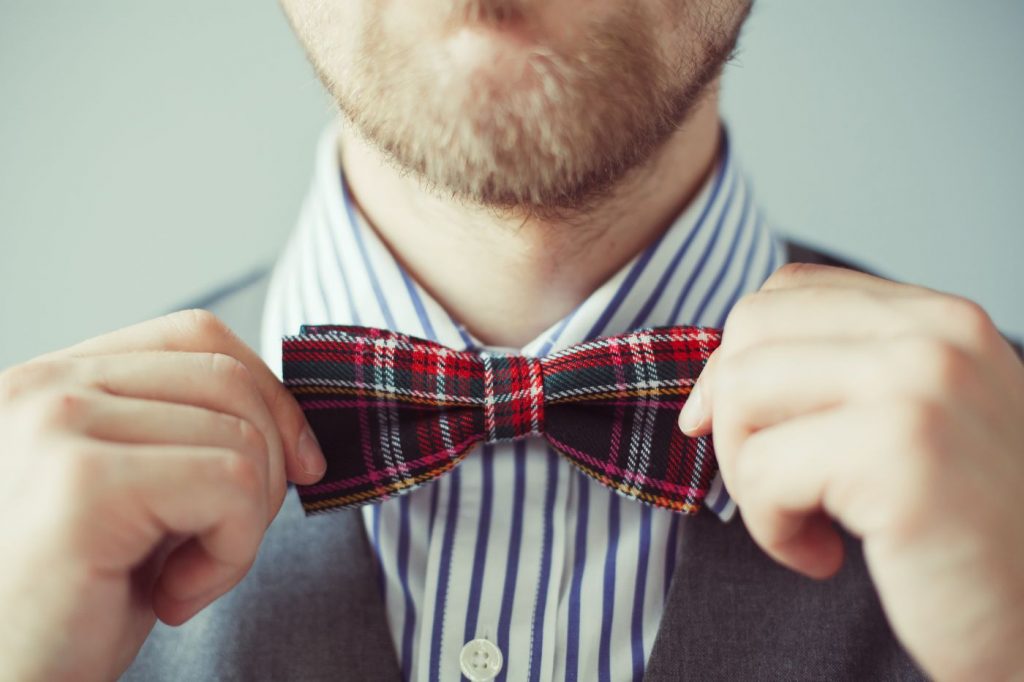 This Certainly Helps Some People

The following charts and series of photos show exactly what you need to do in order to tie the perfect bow tie. Unfortunately, most people don't learn this way. The fact that it's easier to find pre-tied bow ties than self-tie bow ties is rooted in this understanding.

But you're not lazy. You've never been lazy, and you're not going to start now. We've come too far, to quit simply. Give this a try. Please notice that in this photo, the part of the bow tie that crosses over the other piece comes from the left side and will begin the hard part. 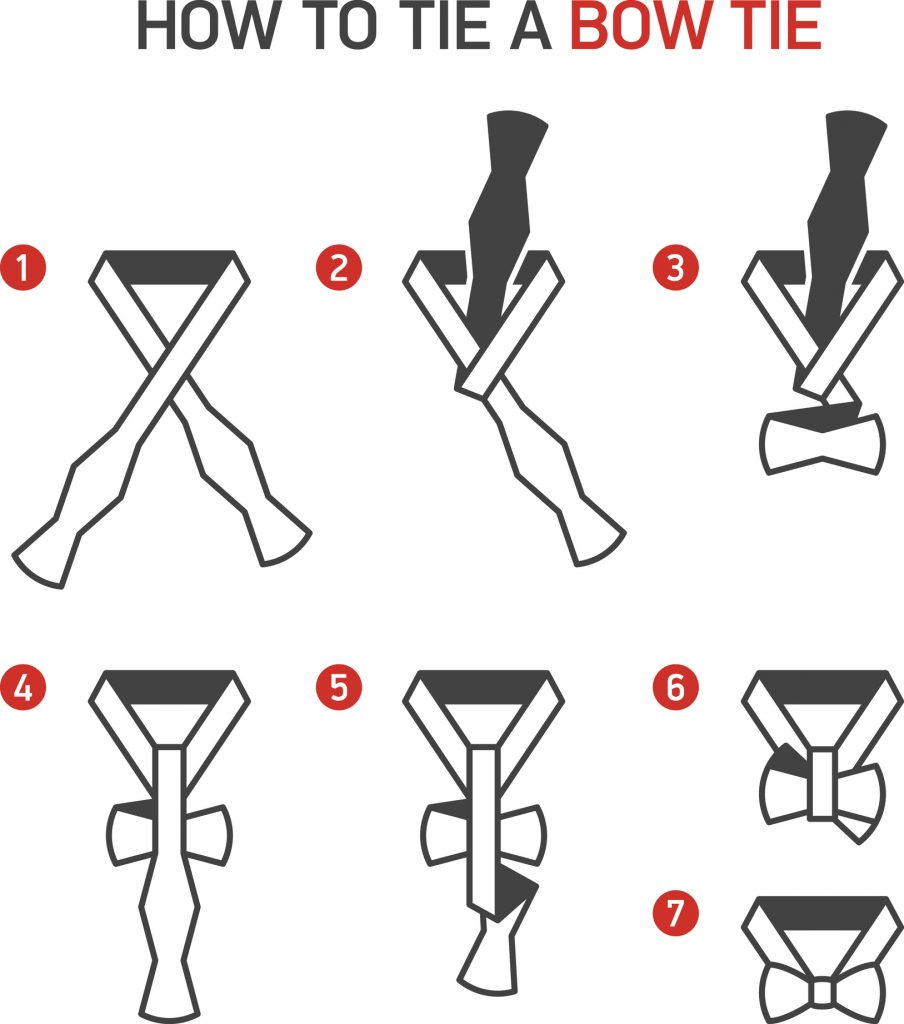 And for Others, It Really Doesn't Help At All

While some people can simply look at pictures and repeat, they are in the minority. This is important, while you look for alternative images to help you. Make sure that the images you choose to look at always have the same side running under the other side, or you're likely taking your first steps in a fool's errand. 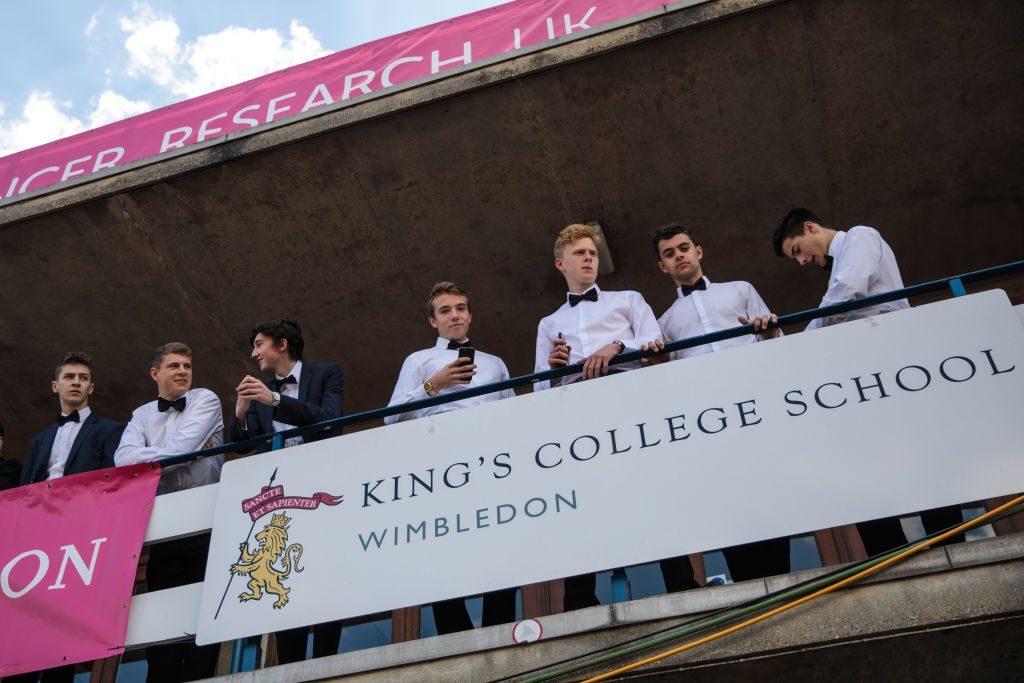 "Hey Mister, How Do You Get To Carnegie Hall?"

Perhaps you've heard the old joke where the young man with his violin case asks an obvious New Yorker "How do I get to Carnegie Hall?" The old man pauses, scratches his chin and replies, "Practice, practice, practice."

Once you've gone through these images a few times, you'll be quite proud of yourself for accomplishing anything remotely resembling a bow tie, but it's far from ready for public consumption just yet. 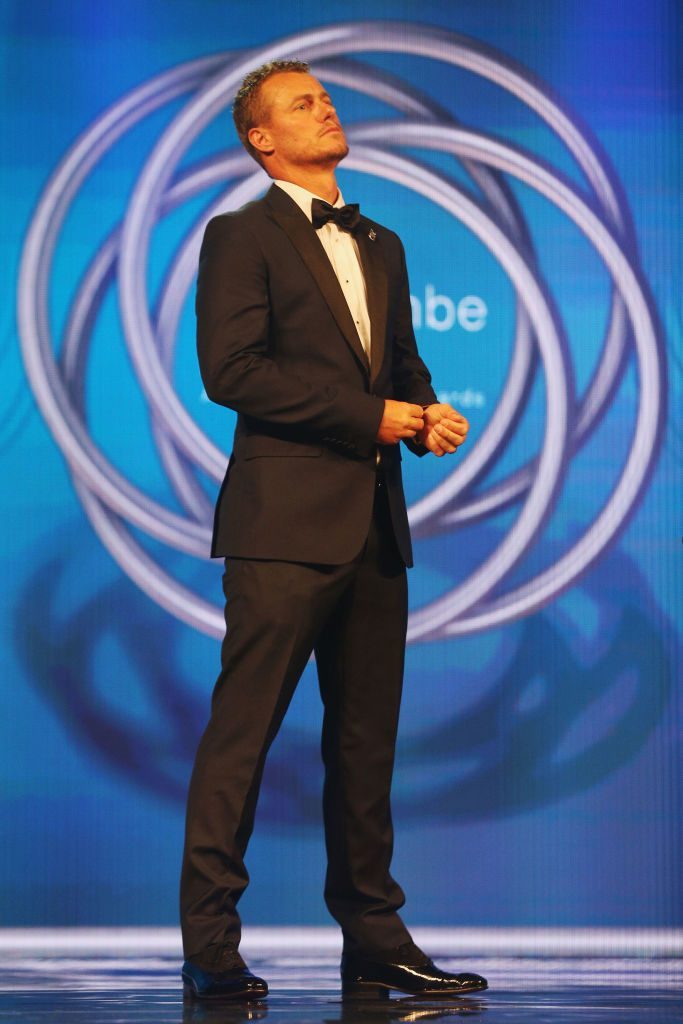 It's Like Riding A Bike; You Just Don't Forget How

The goal is recognizing the method of tying your bow tie and the ability to do it again. It's there for the taking and will give you your signature bow tie. 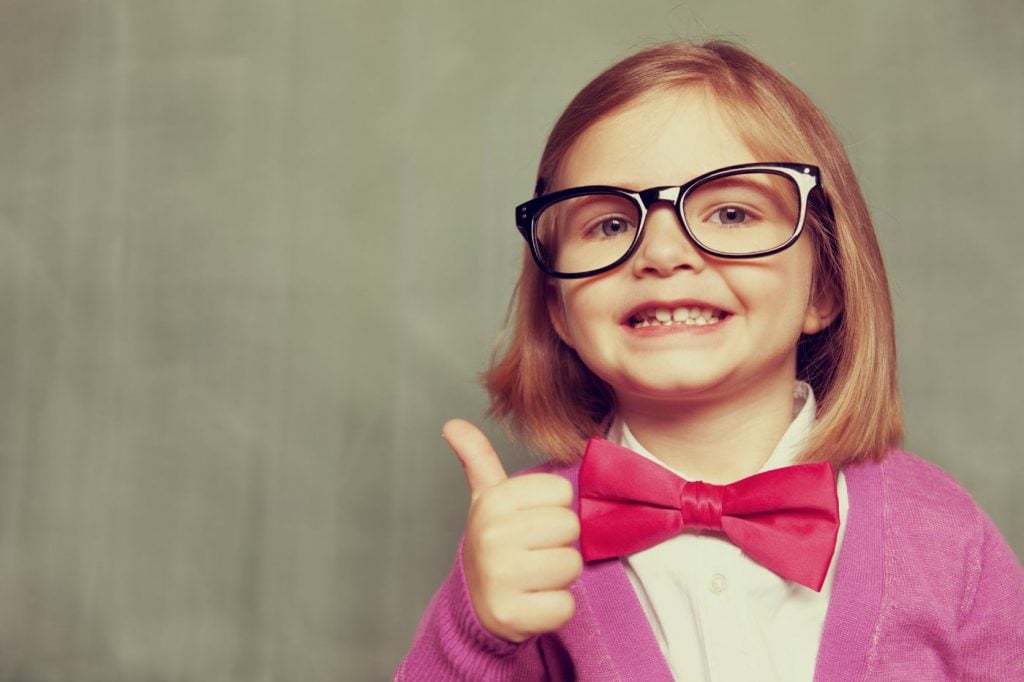