Friendship bracelets created with colorful thread knotted into interesting designs are a popular way to celebrate those you cherish. These hand-made bangles became popular in America in the early 1970s, but the art form originated in ancient China

According to tradition, a friendship bracelet symbolizes the relationship between the giver and the recipient. Once given, the bracelet stays on the recipient's wrist until it falls off on its own. If the wearer cuts the ties before they fall off naturally, tradition dictates it means an early end to the friendship.

Friendship bracelets require nothing more than embroidery floss, scissors, and a safety pin. To get started, choose colors based on your pattern, and cut the floss to the appropriate size.

Some bracelets require just one thread of each color. For these, cut the thread to 36-inches and knot the bunch of threads at the top. Some bracelets require doubles of each color. For these, cut the threads into 72-inches lengths. Fold the bunch of threads in half to double it. Knot the entire group of threads at the folded end, creating a small loop. Secure the knotted threads to a stable surface with a safety pin. 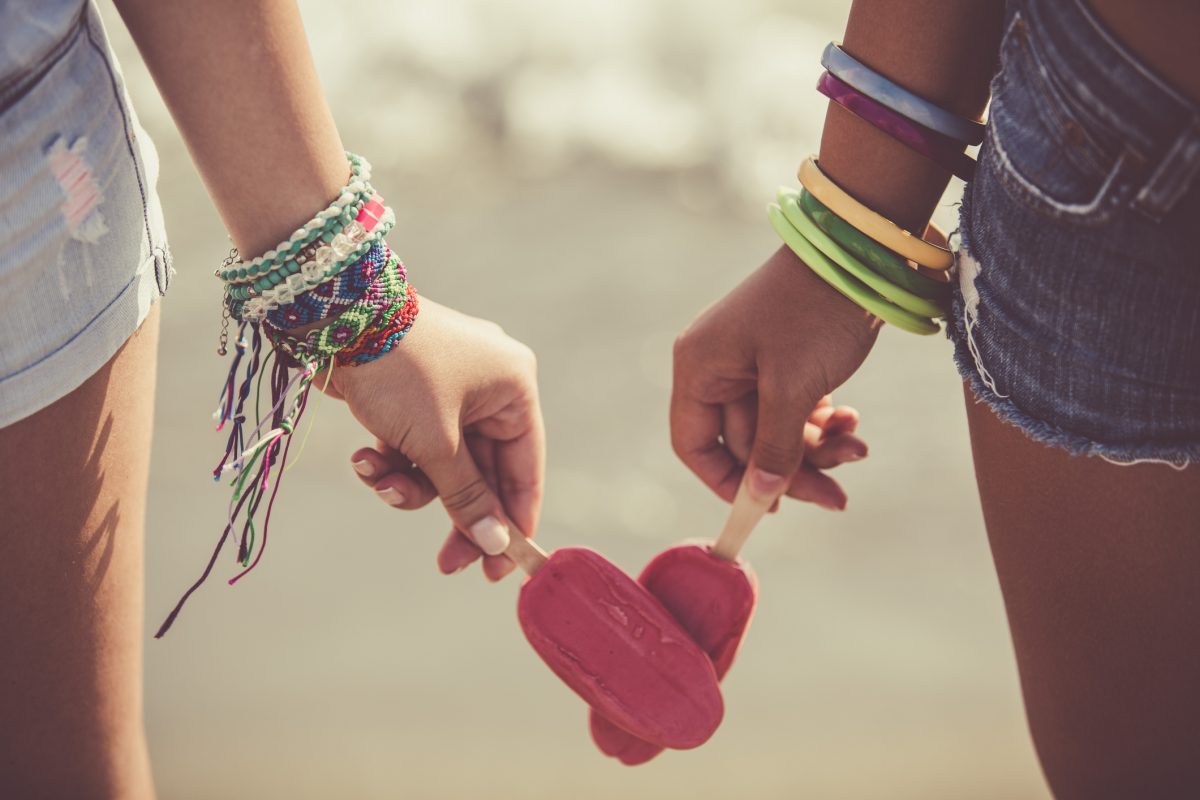 All friendship bracelet patterns are made from knots, either the left knot or the right knot. To make a left knot, place a thread on top of the piece directly to its right. This will look like the number four. Loop the thread under its neighbor and tie the knot.

To make a right knot, lay the thread over the thread to its left, creating the shape of the letter P. Loop the thread under its neighbor and tie the knot. Most friendship bracelet patterns require two knots of each color before moving on to the next strand. 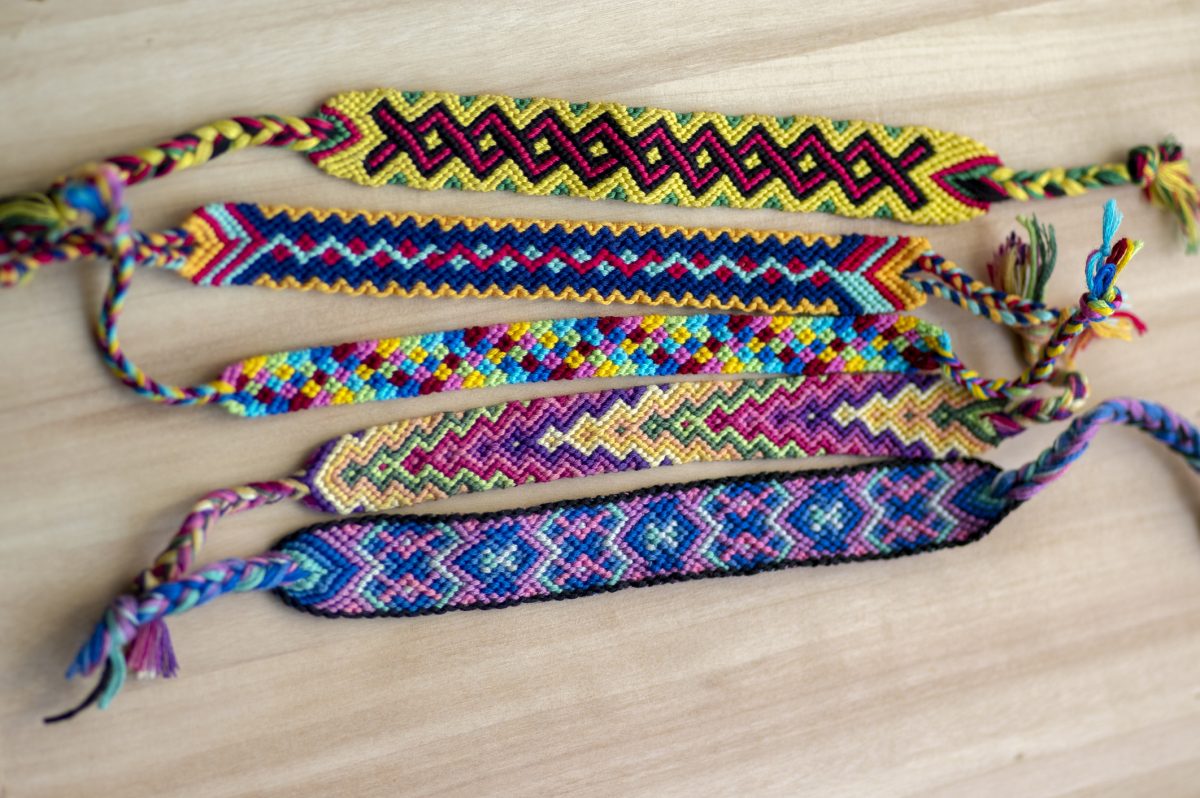 The candy stripe friendship bracelet is easy and a great pattern for beginners. To begin, choose a set of at least four coordinating colors. Start with the strand on the left, and make left knots from one end to the next, doubling the knots on each strand. Repeat the pattern, always starting with the string that's on the left.

You can make candy stripe bracelets with more than four colors. The more colors you add, the wider the bracelet becomes. You can also make it with just two colors, but you will need two strands of each color to have at least four total strands. 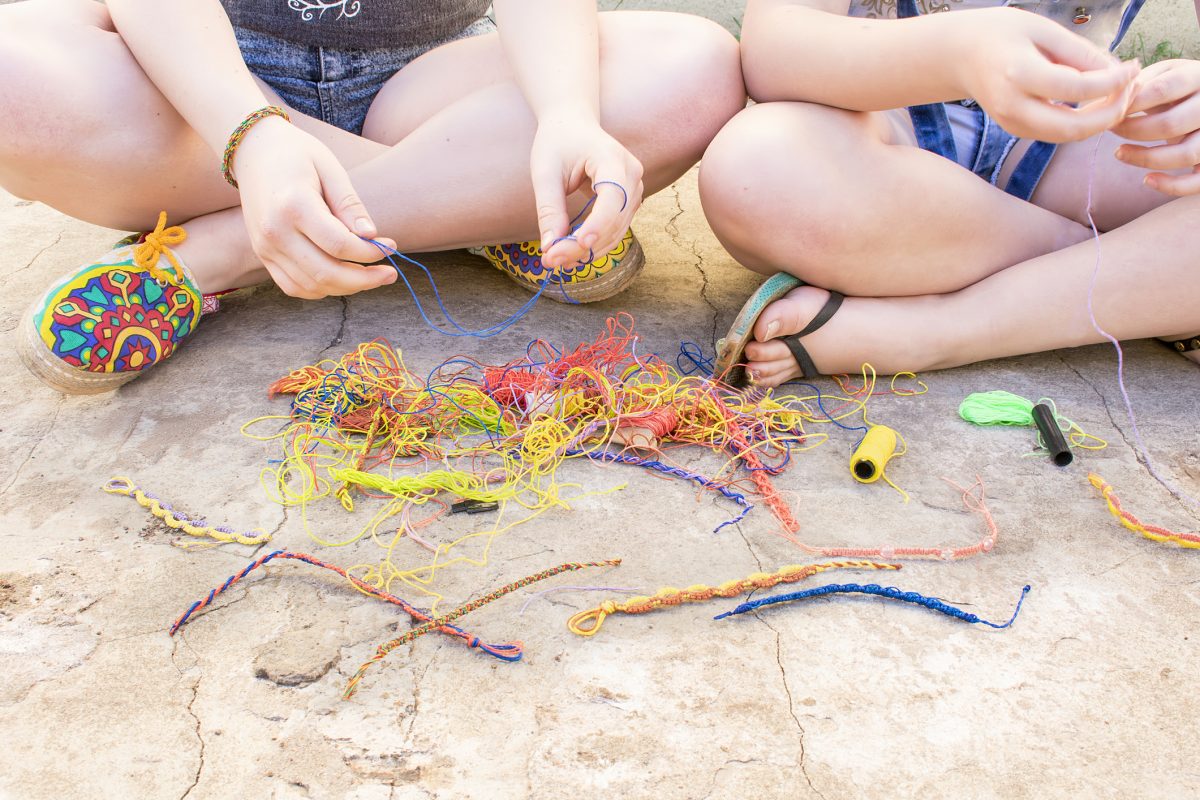 The chevron bracelet, which makes an interesting v-shaped pattern, is a good choice for a second design. This bracelet uses four colors doubled to create eight strands. After doubling the threads and tying the knot, lay them out, so they follow this color pattern: A, B, C D, D, C, B, A.

Starting at the left, make left knots, two per strand, with the first color until it reaches the center of the bracelet. Then, starting at the right, make right knots until the threads meet in the middle. Repeat using the new exterior color. For the first few layers, pay close attention to the color order. 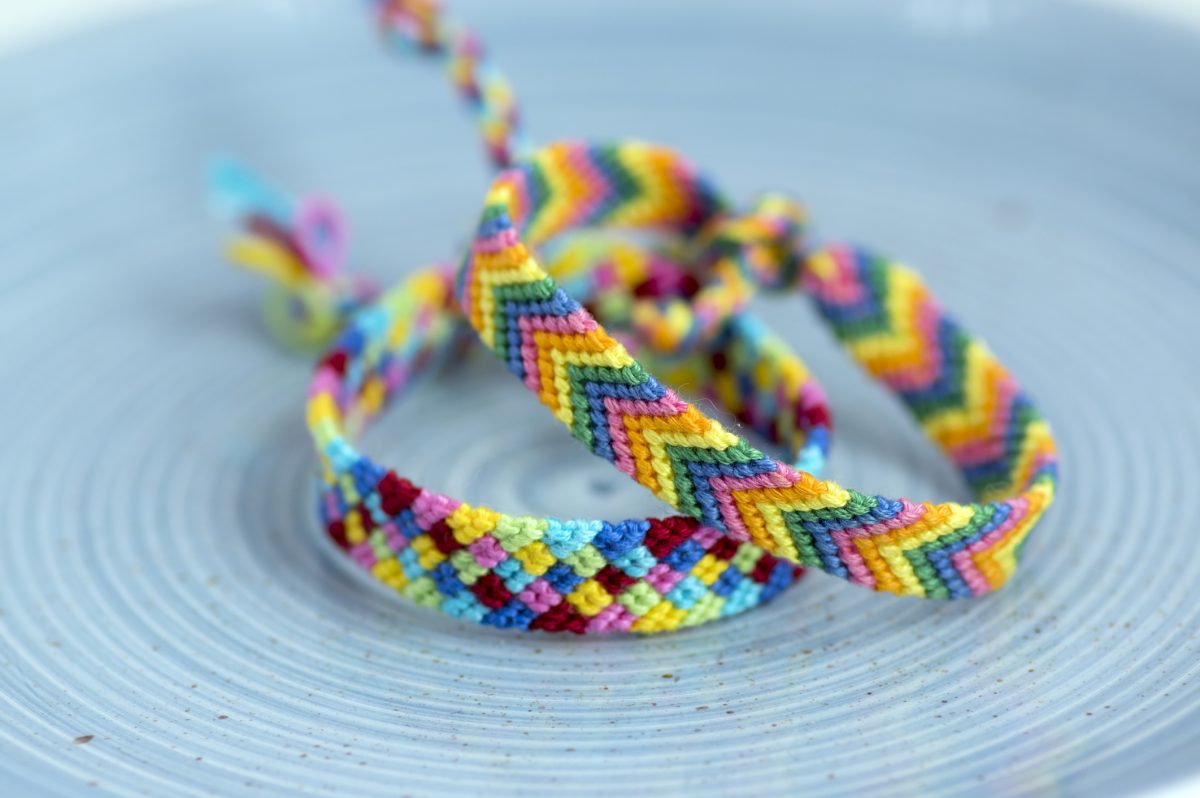 The type of bracelet you make will determine what type of ending it needs, but friendship bracelets do not use clasps or hooks. Bracelets that start with a knot tie and no loop finish with another knot tie. After knotting, braid both loose ends, and tie them together on the recipient's wrist, trimming any loose ends.

For bracelets that start with a loop, separate the end into two groups, and knot each one. Then, braid them. Pull these braided ends through the starting loop, and measure them on the recipient's wrist. Knot them over the loop to hold the bracelet in place. 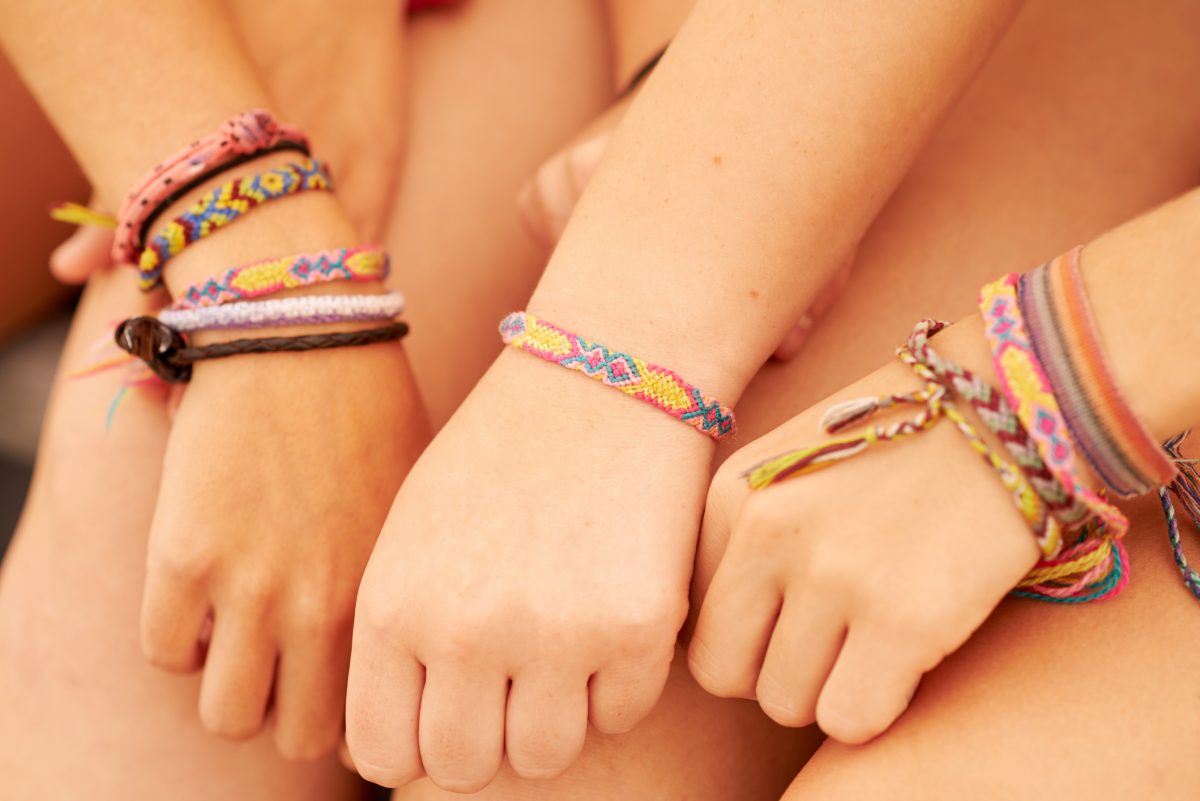 Your first friendship bracelet requires practice and patience. Choose an easy pattern for your first bracelet. As you work, go slowly to keep the long strands from getting tangled. Keep tension in the strands, and pull each knot tight to the top of the bracelet.

Try not to stop until the project is complete, so you don't lose your place. If you must take a break, consider taping the ends of your strands to a piece of cardboard to prevent tangling and keep them in order. 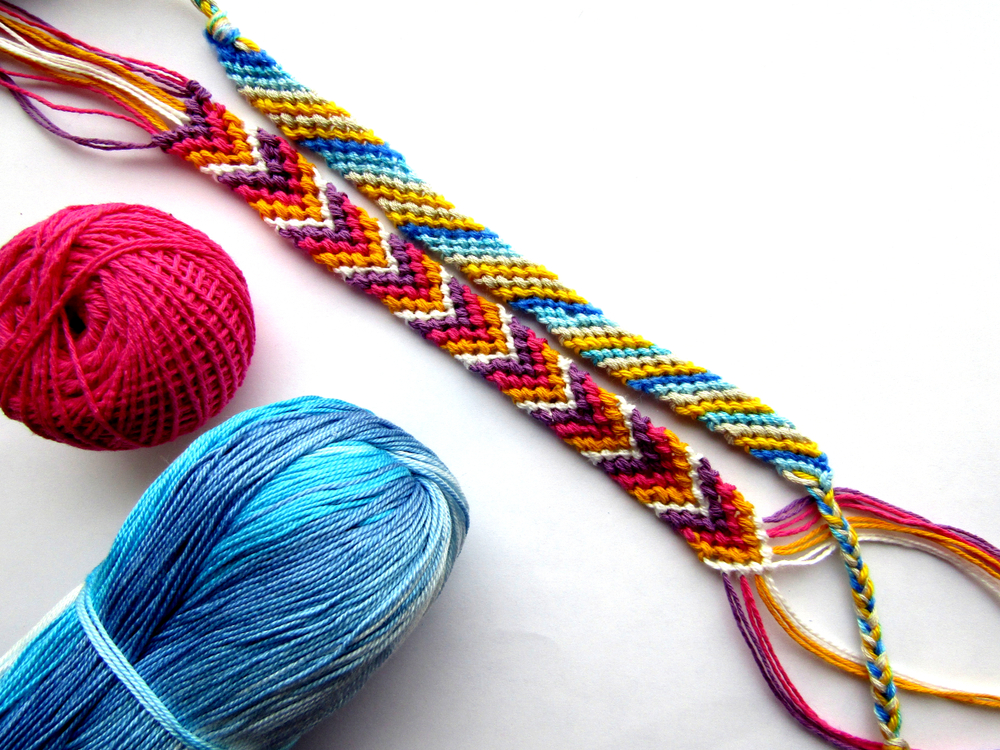 Each friendship bracelet color has its meaning, so consider these when choosing the colors for bracelet patterns. Red is the color for love and passion, and mixing it with yellow means crazy love. Yellow represents hope and sunshine, but when mixed with green it represents peace. Green stands for hope and good luck. Light blue hues represent friendship, while dark blue hues represent tranquility. White stands for purity and freedom, while contrasting black represents loneliness and sadness. Orange gives feelings of fire and energy. 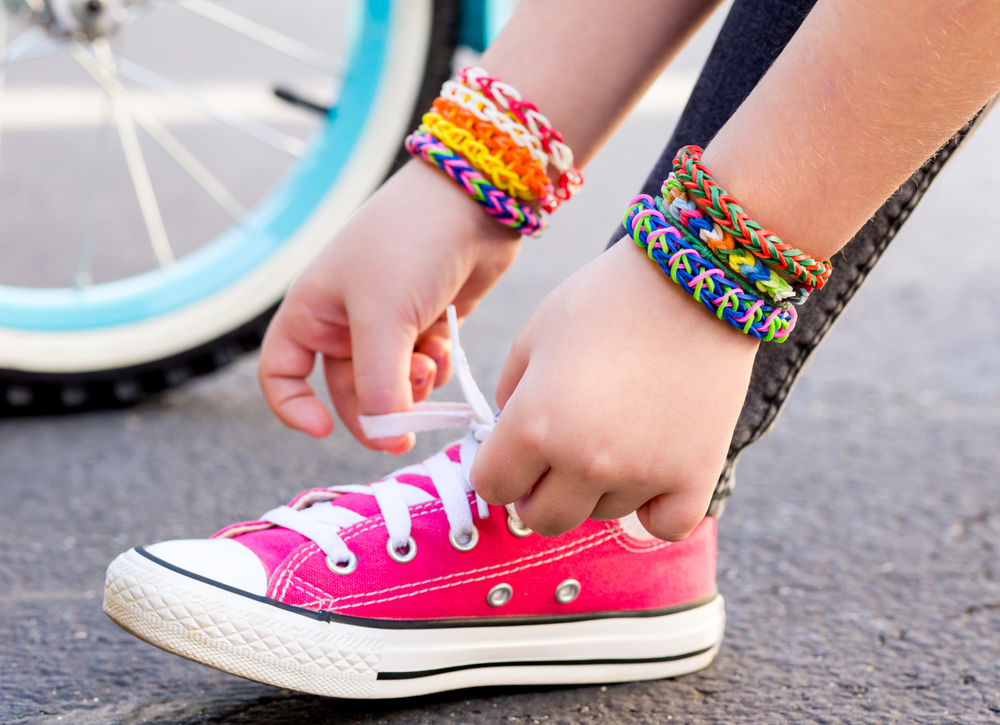 After mastering the basic patterns, consider adding embellishments to make your friendship bracelets stand out. To attach charms to the bracelet, weave a ring into the bottom edge of the bracelet. Attach it about two strands from the bottom to give the bracelet enough strength to hold the charm. Add a charm to the ring, then close it with needle-nose pliers.

To add rhinestones, use a thin tapestry needle to sew a string of rhinestones onto the bracelet. Knot the thread on the backside of your bracelet after attaching the gems. 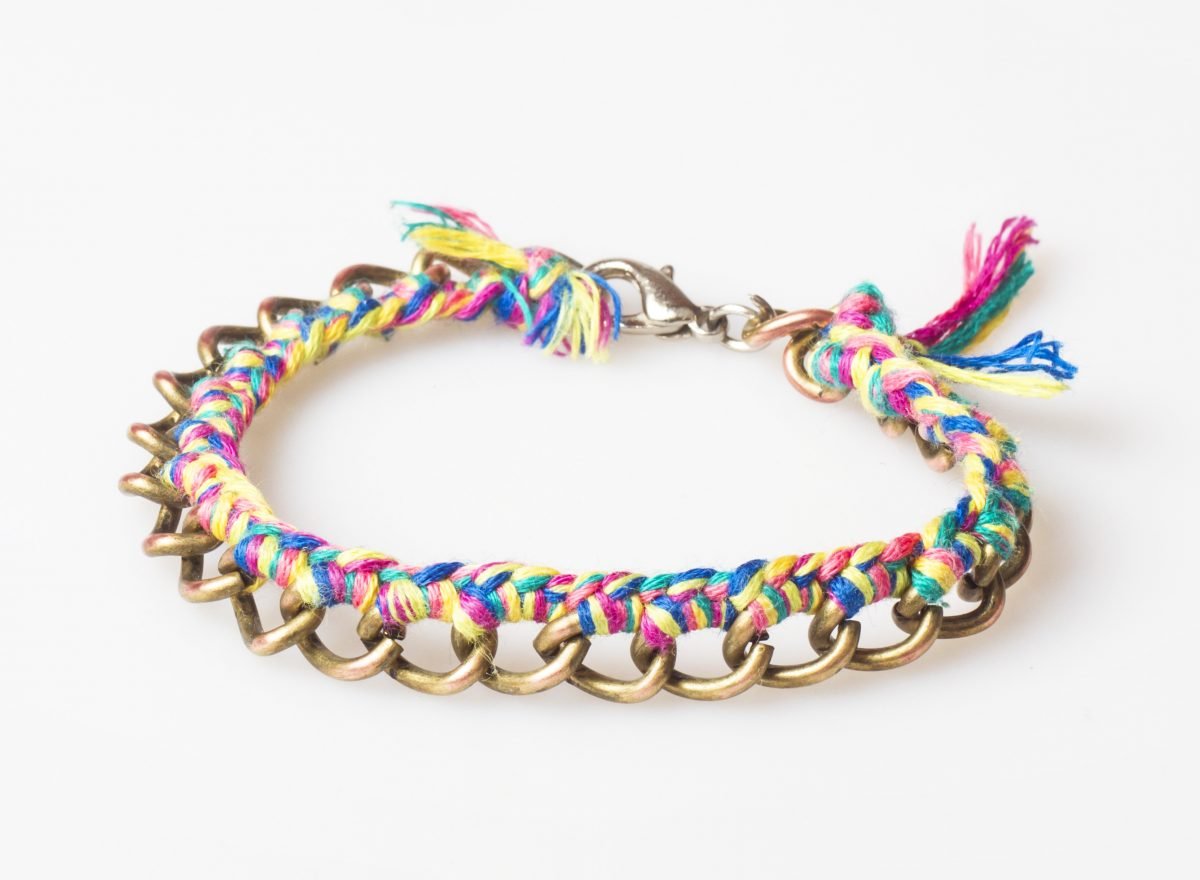 Braiding is an alternate option for your friendship bracelet design. A five-strand braid is an easy option that makes a distinctive pattern. To start, cut five strands of floss about 48-inches long, folding them and knotting at the fold to make a loop. Divide the strands, laying the same-color cords together. Place three colors on the left and two on the right.

Starting with the cord on the far left, braid it over the next cord and then under the third. Pull this cord to the right, leaving two on the left and three on the right. Repeat the pattern from the right to the left. Continue alternating left and right until finished. 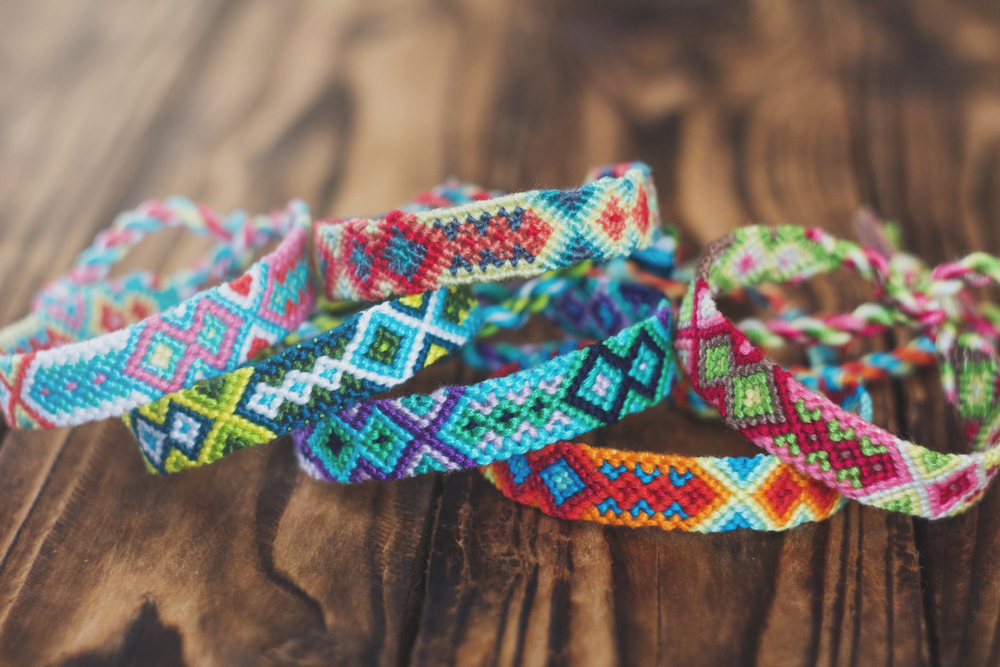 Friendship bracelets are so popular that they have made several entries in the Guinness Book of World Records. In 2014, the Tonge Family from California made 1,487 friendship bracelets in four hours, earning them a spot in the record books. They donated their bracelets to orphaned children in economically challenged countries after recording their feat. 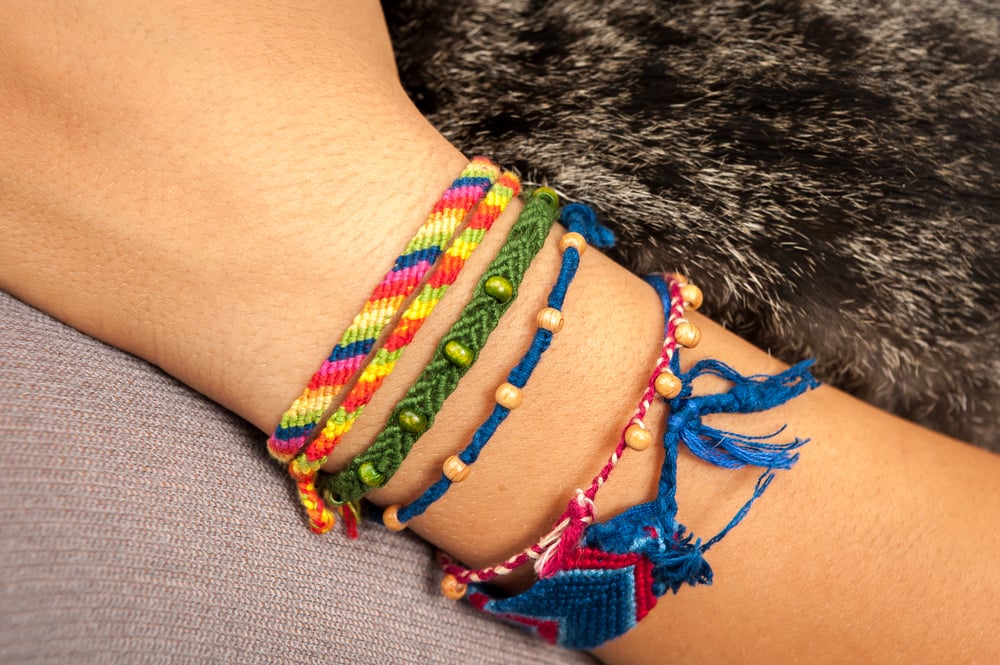