Braille is a system of raised dots read through touch. People with visual impairments read and write in Braille. People without visual impairment can read Braille with their eyes. Values are assigned to Braille symbols according to the sort order of the alphabet in various languages.

Most Braille alphabets follow the French sorting order of the 26-letter Latin alphabet. Japanese and Korean Braille are very different from other Braille transcriptions, and they assign codes using abstract principles.

Braille was originally developed by Charles Barbiera, a French army captain, in 1819. It was called "night writing," and was used for officers to read commands and communicate during the night without candles or lamps. Enemy soldiers may have heard speech, and light from candles or lamps would have attracted enemy attention as well. Louis Braille was a 15-year-old student with a visual impairment. He learned of Barbier's 'night writing' and worked to turn it into the Braille used today. 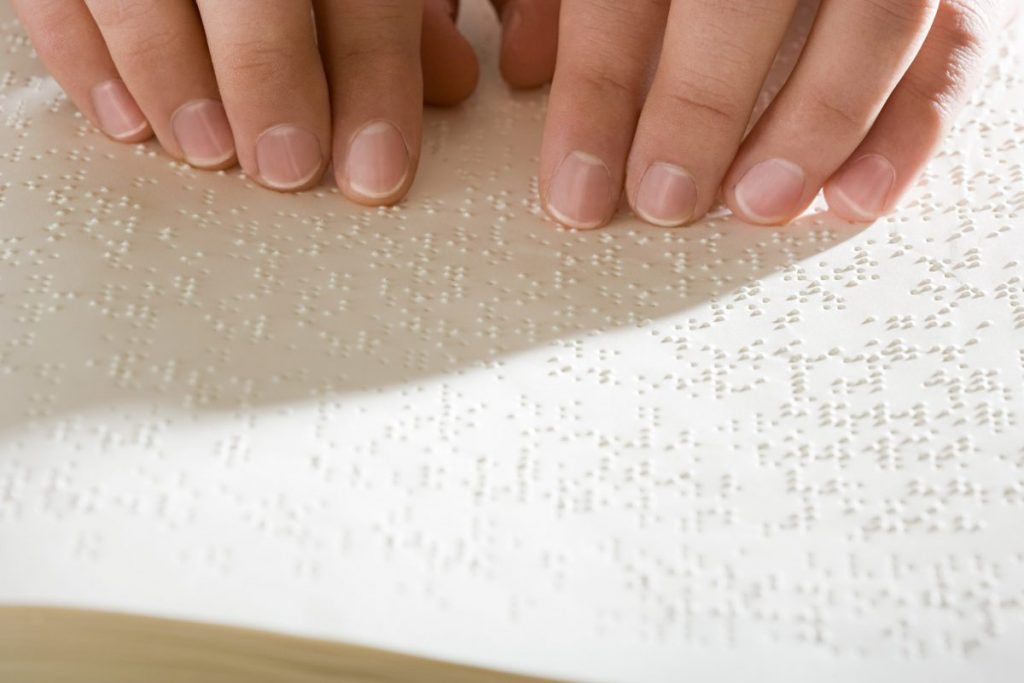 Many people mistakenly believe Braille is a language, but it is not. Braille is a tactile coded alphabet used to transcribe language. English, Chinese, Spanish, Russian, Hebrew and many other languages have Braille versions. People with visual impairments learn Braille in their native language. They can not read Braille in another language unless they also learn that language. 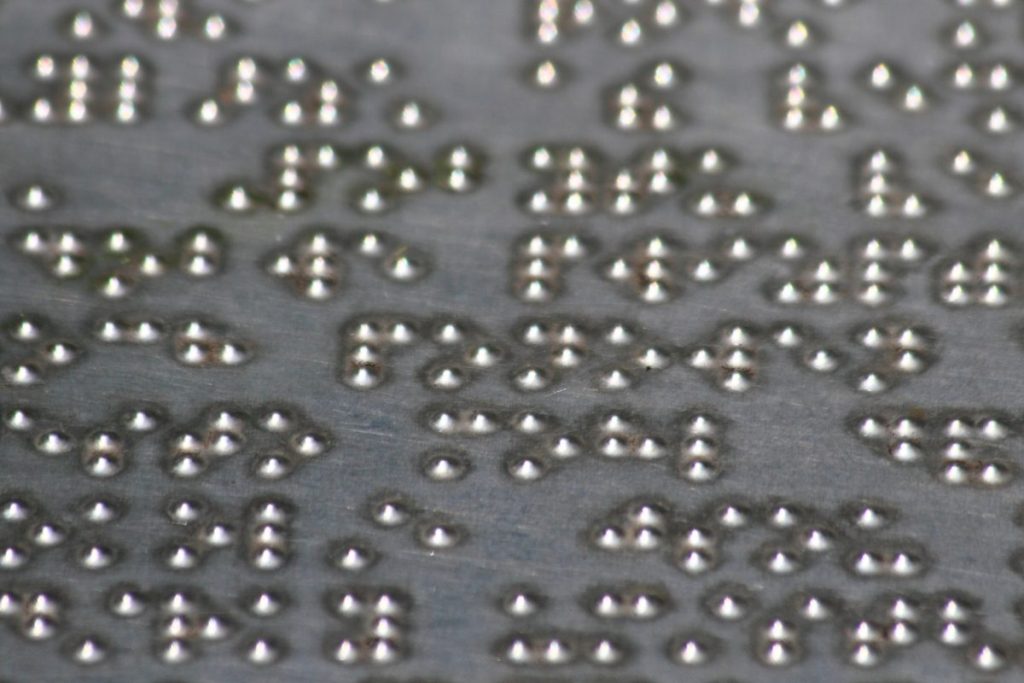 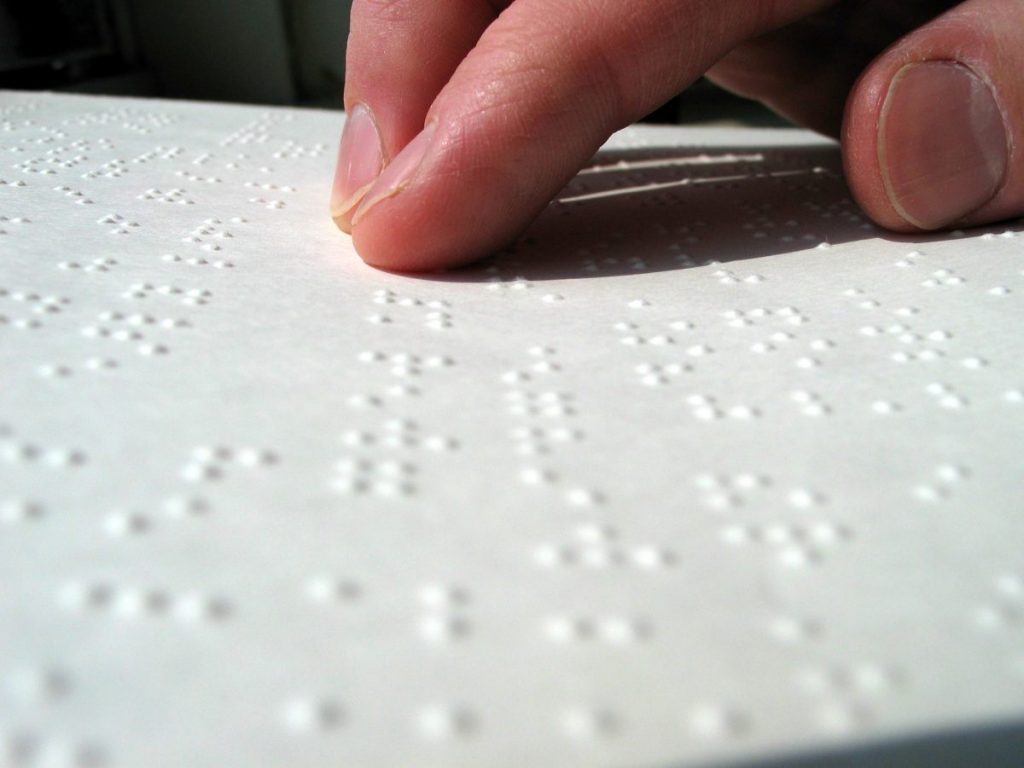 The National Federation for the Blind considers using technology as a substitute for learning Braille a tragedy. People with visual impairments that don't learn Braille are illiterate when they can't access technology. Numerous studies have shown that learning Braille increases the chances of earning an advanced degree, establishing a career, and living independently for those with blindness. The results of one study showed that 44% of people with blindness who learned Braille were unemployed, while 77% of those who never learned Braille were unemployed. 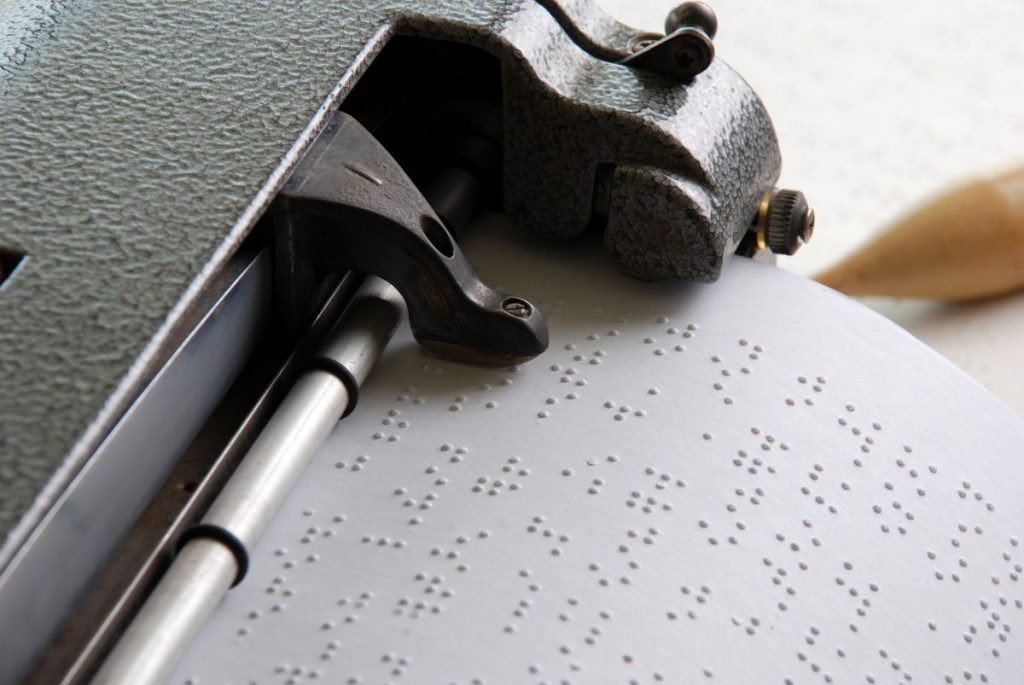 Two major drawbacks of Braille are the space requirement and the price of materials. Braille takes up much more space than text does. A Braille character is called a cell, and each cell contains 6 dot positions. The arrangement and number of the dots indicate which character is represented. There are 64 possible combinations for each 6-dot grid.

Braille novels or textbooks are extremely large, while the selection of reading materials in Braille is limited and expensive. The Braille version of a popular novel trending on bestseller lists can cost over a hundred dollars. The Braille version of the King James Bible is 18 volumes and takes up 72-inches of shelf space. An organization called Braille Bibles International supplies free Braille Bibles to people with visual impairments. 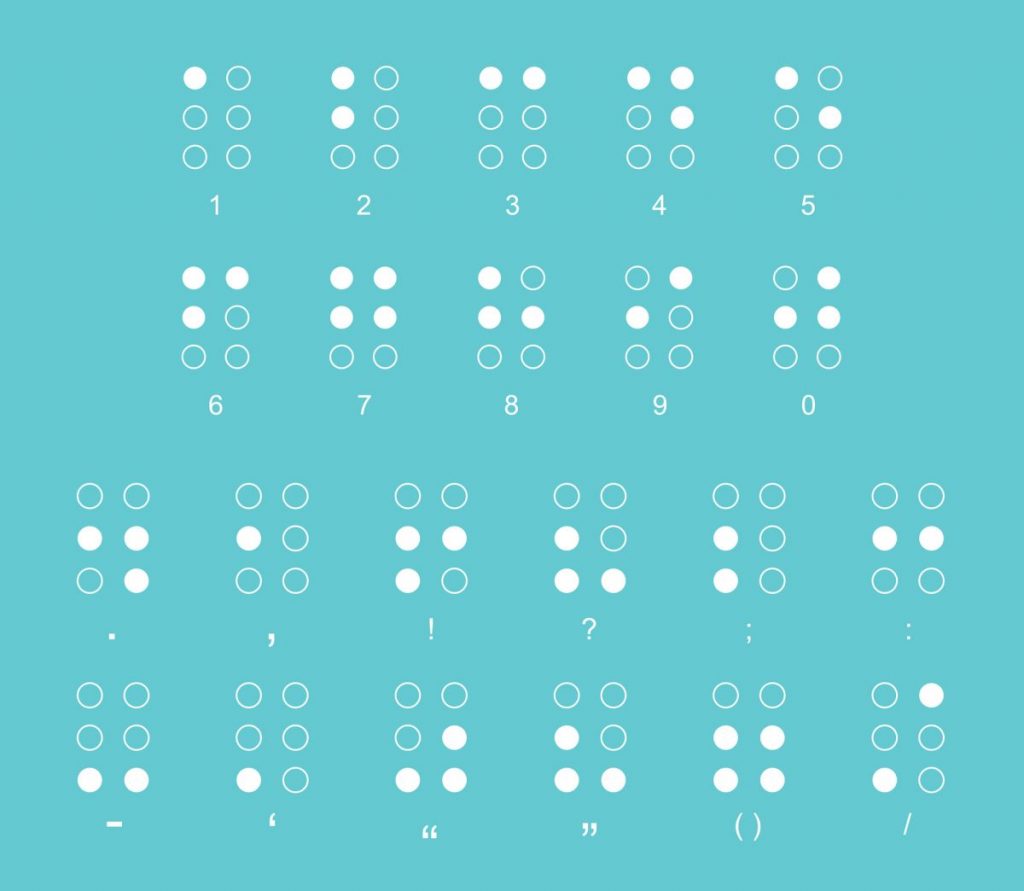 Modern technology offers so many options that some people believe Braille is obsolete. Audiobooks don't take up any shelf space, and the selection of books is the same whether a person has a visual impairment or not. Text-to-speech software turns every book or document into audio, although the voices tend to sound robotic and errors are common. Personal electronic devices allow people with visual impairments to keep necessary technology on-hand. They can listen to web content, instructions, or even messages from friends. They can also record their own words by speaking into the device. 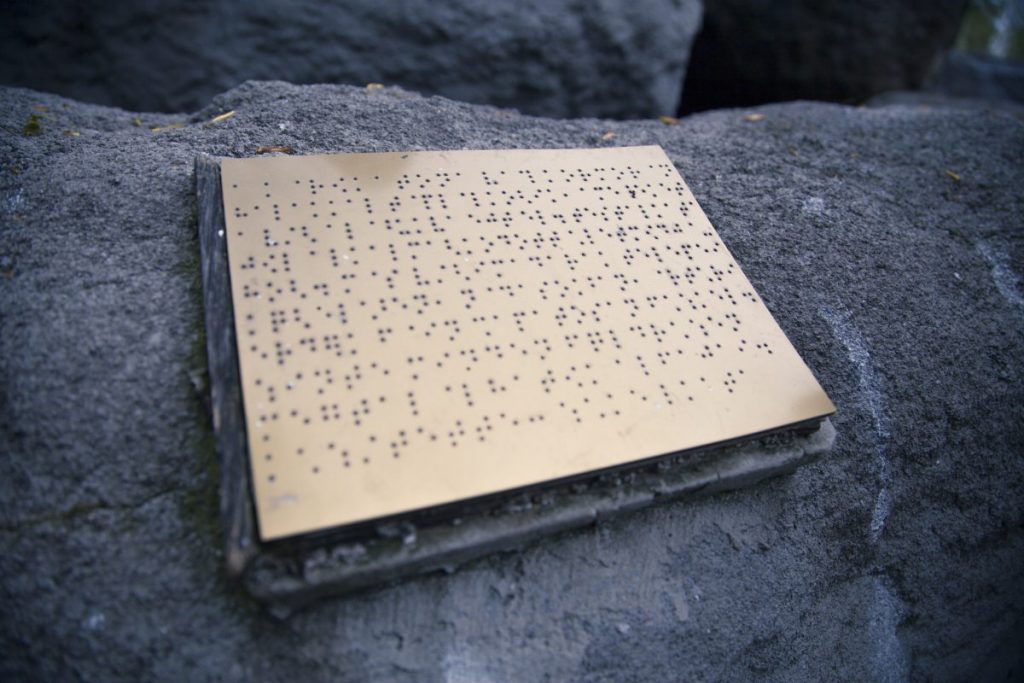 People born with visual impairments that never learn Braille usually have a poor understanding of language. Sometimes they don't know that commonly used phrases, such as "once upon a time," are a string of individual words. Listening to words doesn't spark activity in parts of the brain that are active while reading. Some sections of the brain that were once associated with "visual reading" don't actually require vision. The same areas of the brain are active while a person is reading visually or reading Braille through touch. Literacy is essential for understanding language and many other complex concepts. 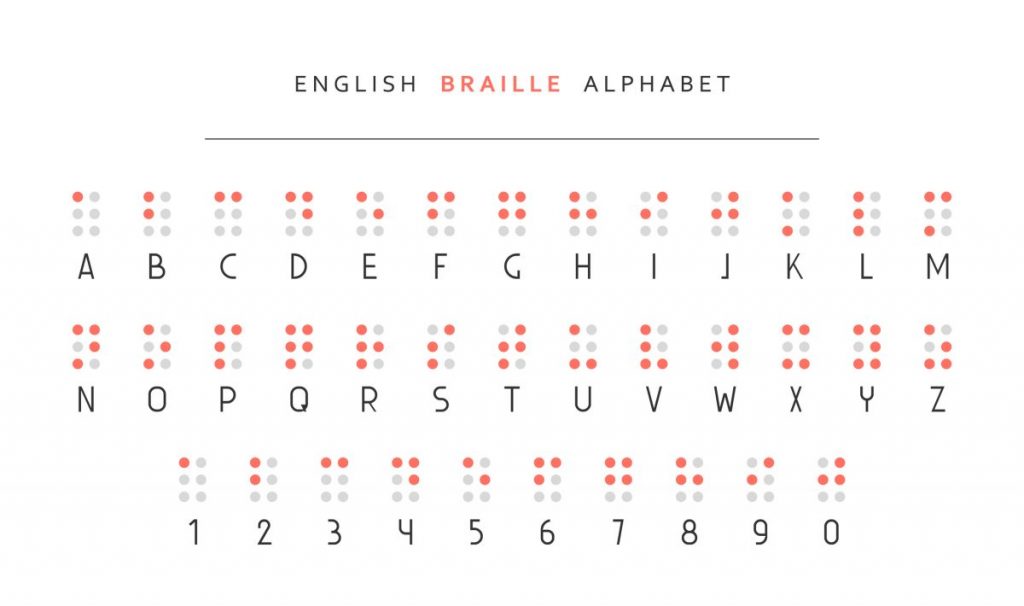 Braille paper is designed for Braille embossing. It is thicker than regular printing paper because Braille dots are pressed into the page, and the dots have to stay firm and raised. Braille paper meets a specific level of quality to produce Braille documents, letters, or books. A slate and stylus can be used to write Braille. The slate, or template, is covered in evenly spaced depressions. A sheet of paper is placed on the slate, while a stylus is used to poke holes. Braille printers are actually more similar to embossing devices than traditional printers. 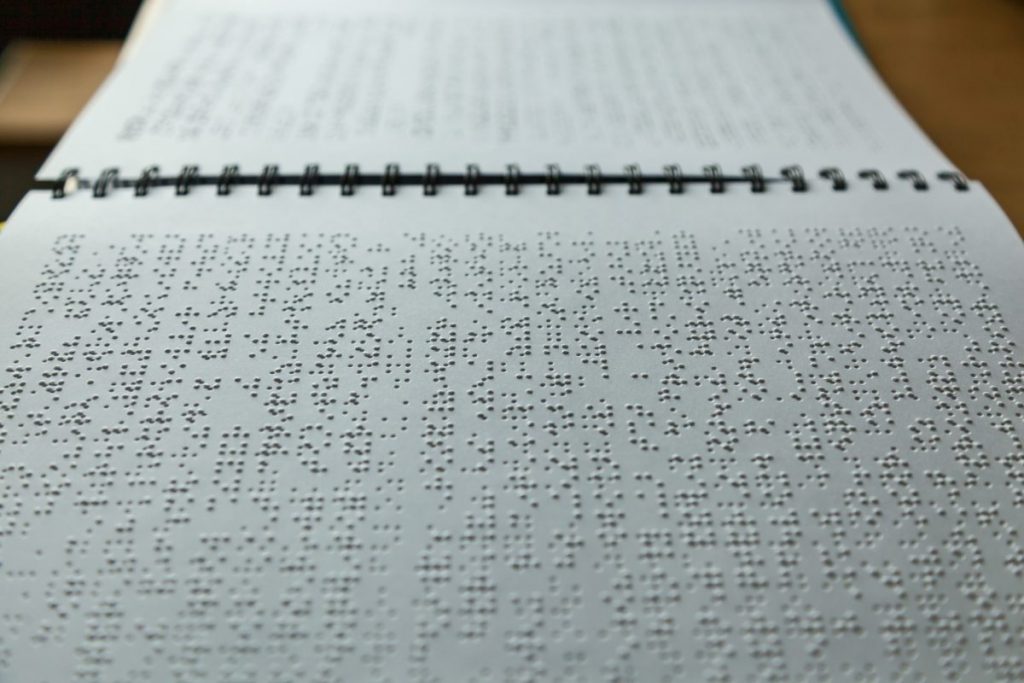 It isn't necessary to carry a slate and stylus or use a bulky embossing printer for academic or personal notes. Braille displays connect to computers or mobile devices to replicate text on screens in Braille. Braille displays also transform text into refreshable Braille that a user can interact with or edit. Keyboards can be in Braile or the traditional QWERTY format, and most Braille notetakers include a synthetic speech option for input as well. 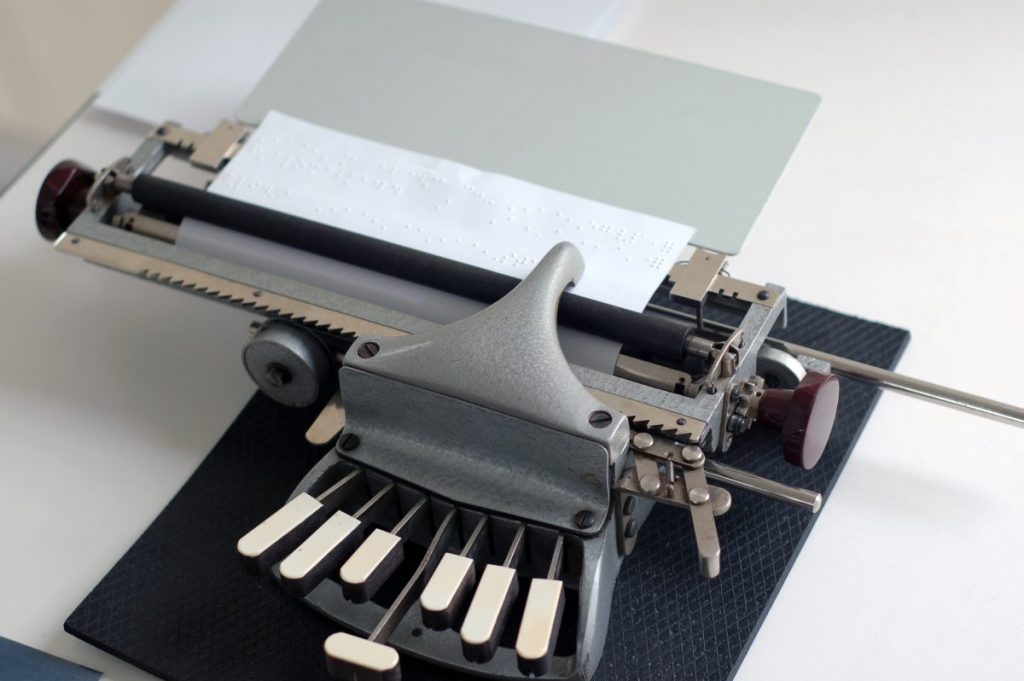 Learning Braille isn't quick or simple. There are three types of English Braille. Grade 1 is the basic alphabet and punctuation without contractions. It is used by beginners. Grade 2 consists of the alphabet, punctuation, symbols, and contractions. Most menus, signs, reading materials, and other mainstream uses of Braille are in grade 2. Grade 3 is a sort of shorthand that condenses entire words.

Some specialized subjects have their own Braille codes. The Nemeth Code is for writing mathematical and scientific notation. Braille music code is universal and lets musicians share information regardless of their native languages. A Braille chess code lets players track moves and analyze games. 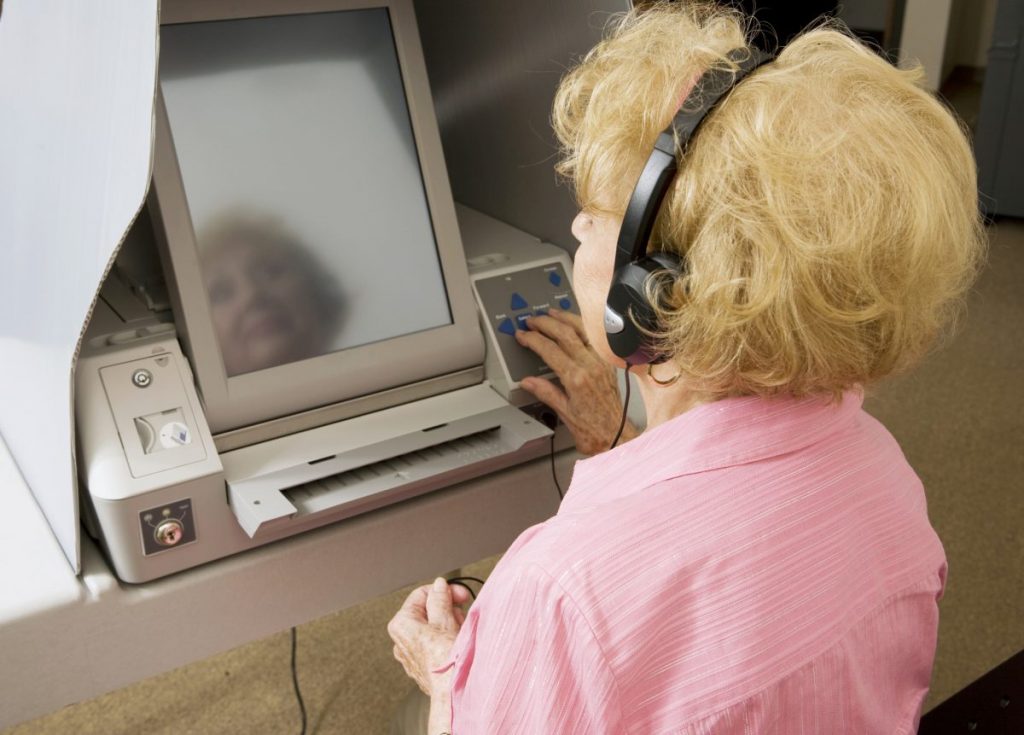