What on Earth is a Huntsman Spider?

Huntsman spiders are the common name for the Sparassidae family. This family of spiders includes 1,027 identified species in temperate or tropical regions of Australia, Africa, Asia, and the Americas. Named for their speed and method of hunting prey, huntsman spiders are also known by various local names, such as the wood spider in Australia because they are frequently seen in forests, mine shafts, and woodpiles. A species in southern Africa is called rain spiders or lizard-eating spider because they live in wet habitats and hunt lizards, frogs and several types of small invertebrates.

Some huntsman spiders are large with long legs that average 10-15 centimeters across, although a minority of Huntsman species are small with a leg span of only 1-2 centimeters. Their coloration is usually shades of grey or brown with orange, black or white markings. Some species have banded legs, and all Huntsman spiders have bristles, commonly described as hair, on their bodies and legs. Most species have flat bodies suited to living in narrow spaces. Their legs have twisted joints to spread forward and laterally. They are sometimes referred to as crab spiders because their unusual jointed legs result in crab-like motions. 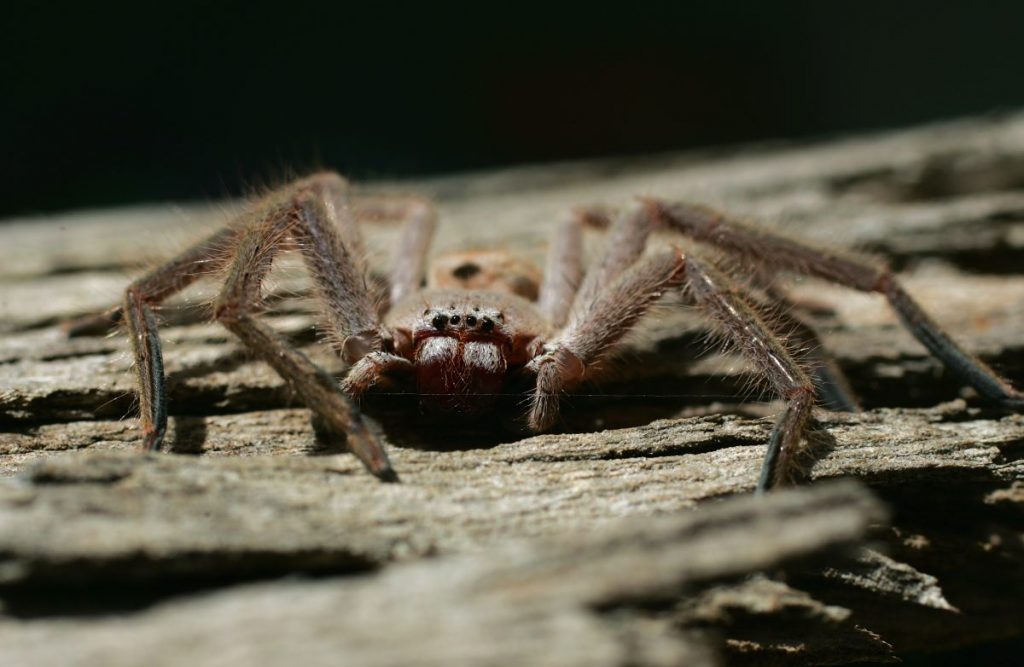 Huntsman spiders are most active at night and unlike the spider in your imagination, they do not use a web to catch insects. Instead, they chase prey and kill with a combination of venom and strong chelicerae, which are their mouthparts. Their prey includes insects, other spiders, and small invertebrates. The larger species also hunt mice or small birds, and the Huntsman is one of the few spider species able to kill and eat cockroaches. Some species dig burrows, with or without trapdoors, to ambush prey. 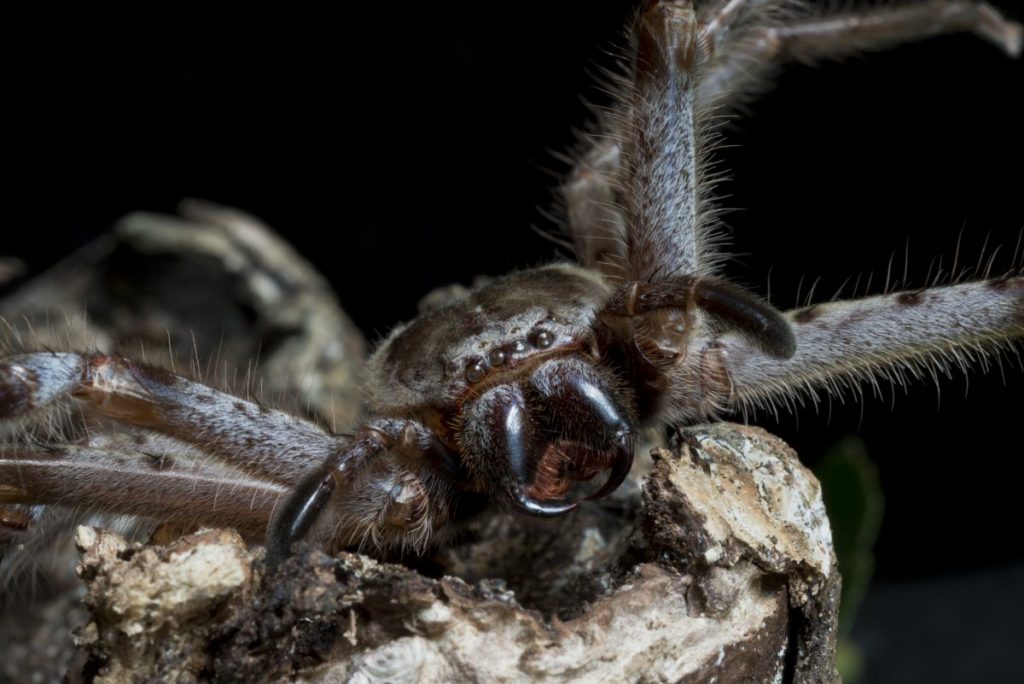 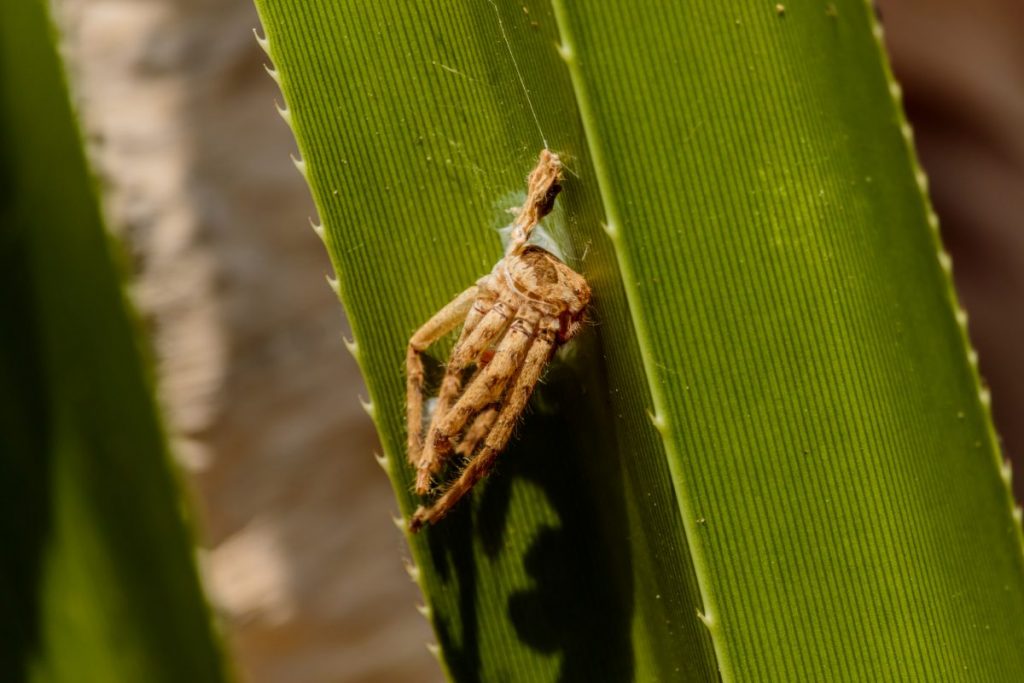 Huntsman spiders live under loose bark on forest floors or on trees, in crevices of rock walls, underneath logs, and in dense foliage. The Huntsman spider is also commonly found in homes and vehicles. Many species are known for hiding behind sun visors in cars or behind curtains and furniture in homes. These spiders can not tolerate freezing winter temperatures and are often stowaways being transported in boxes of produce and other goods. Huntsman species have been found in heated homes and other buildings all over the world, but they won't survive and reproduce in cold climates. 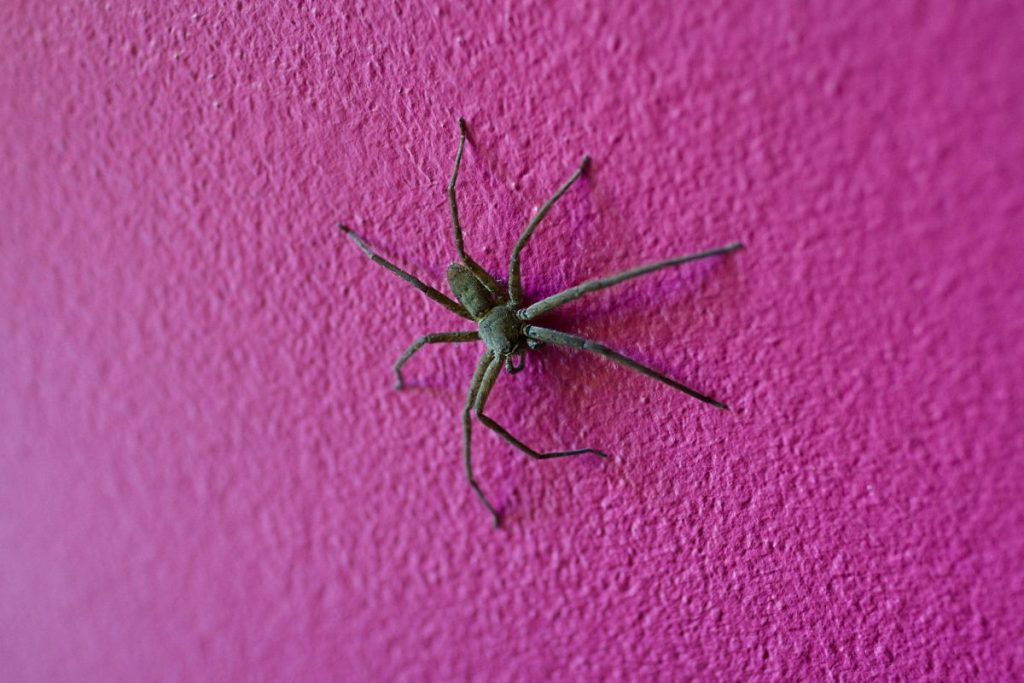 The mating ritual of Huntsman spiders lasts for hours and involves lots of physical contact. The male spider drums pedipalps, the appendages near its mouth, against tree trunks before fertilizing the female's eggs. Unlike other species, female Huntsman spiders do not attack or kill males after mating. In fact, they have been found living together in large colonies of males and females. 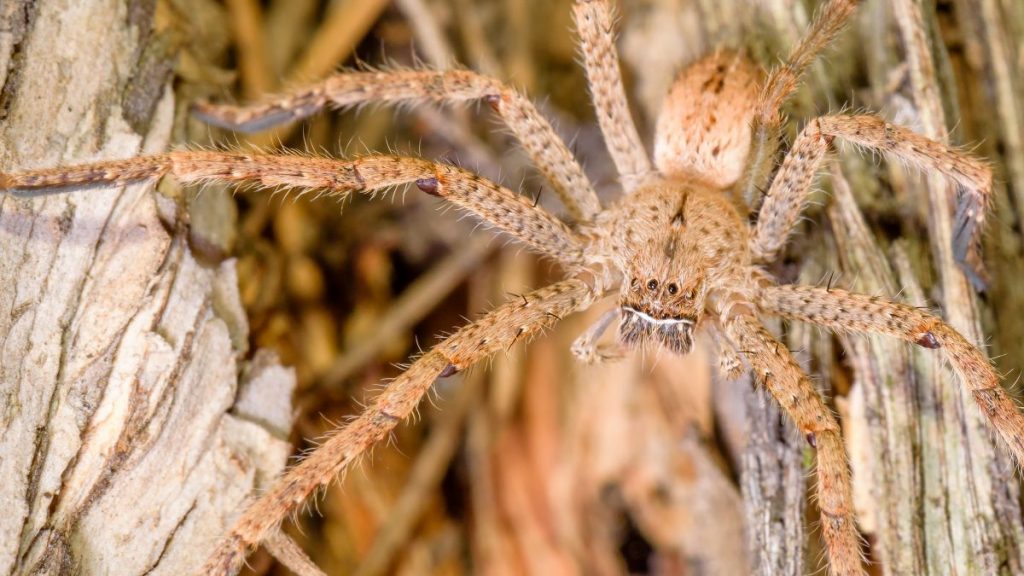 The female Huntsman makes an oval-shaped, flat egg sac out of thin white silk and lays approximately 200 eggs. Many species create a sheet of silk on the ground to lay eggs on. After all of the eggs are deposited, the female finishes the egg sac. The female spider carries the egg sac while the groundsheet is left behind. Some species hide egg sacs under bark, rocks, or other small pieces of debris. The mother spider guards the egg sac for approximately three weeks and displays a rearing, aggressive stance if humans or other animals approach. 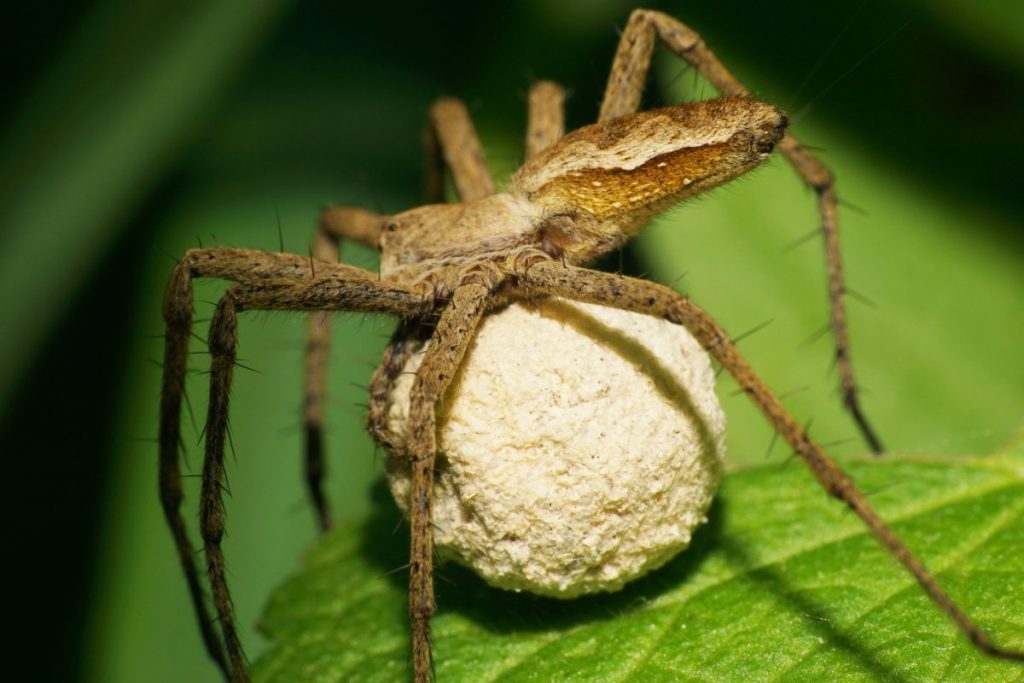 Female Huntsman spiders care for their young. They tear open the egg sac when spiderlings hatch. A mother keeps the pale spiderlings with her and defends them as they grow through several molting stages. The spiderlings reach sexual maturity and adult coloration when they're around a year old. This is when the young spiders disperse. The mother may have spiderlings from up to four separate egg clutches with her at one time. 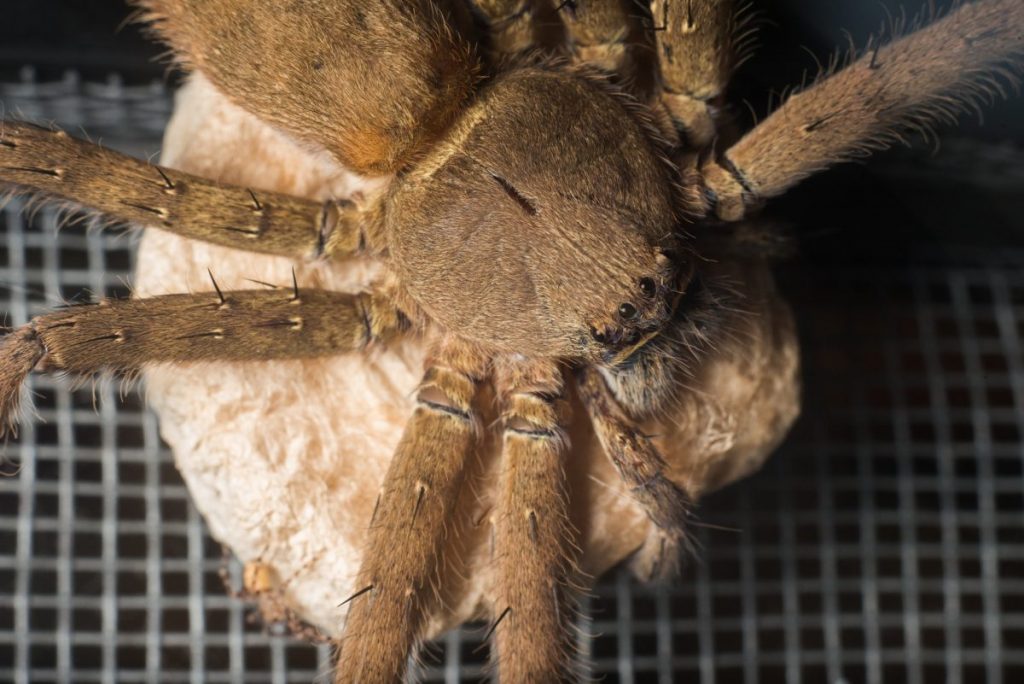 Huntsman spiders are venomous, although they are not considered dangerous to humans. A bite is classified as low-risk with short-term mild to moderate effects. Possible effects of a Huntsman spider bite include localized pain and swelling, inflammation, headache, vomiting, or rapid heart rate. These spiders are not aggressive except during summer months when females are guarding egg sacs or spiderlings. 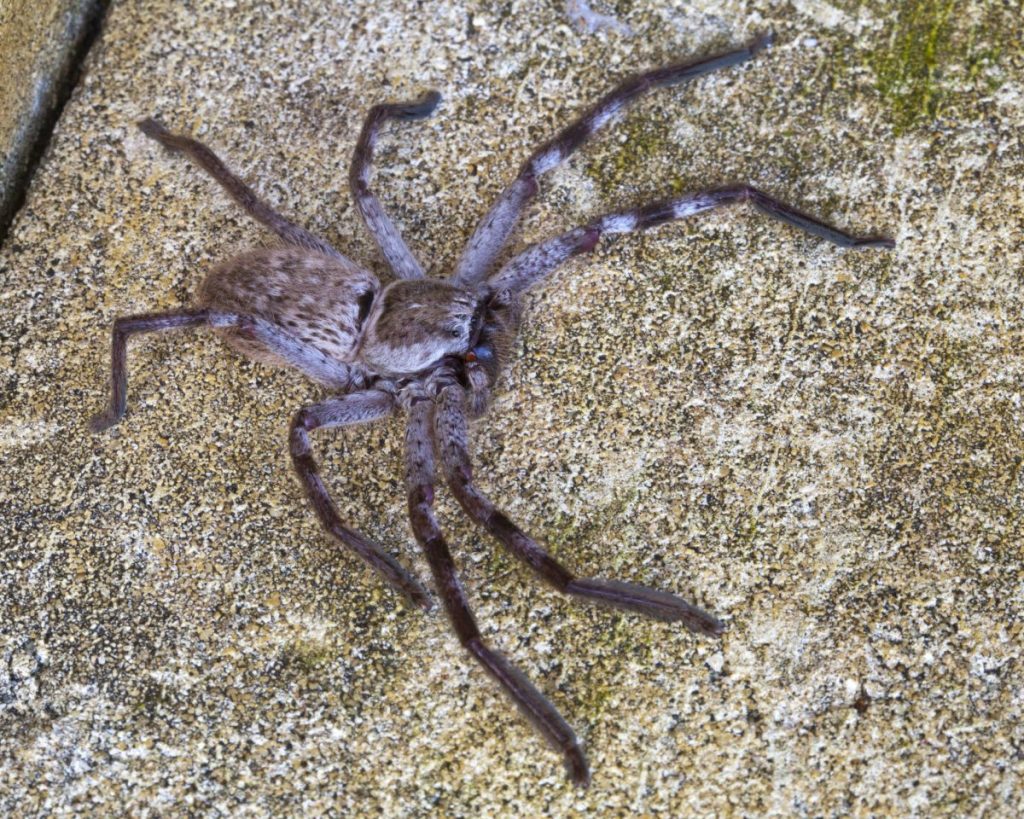 Huntsman spiders are not the largest known spider in terms of weight, but several species share the distinction of largest leg span. The largest known Huntsmen and one of the largest species overall is the Golden Huntsman in Australia. It can weigh up to 5.5 grams and the forelegs alone are 15 centimeters long. The giant huntsman spider found in Australia and Laos is also one of the largest spiders in the world in terms of leg span. The Laos cave spider may be a separate species of Huntsman altogether. Research is ongoing since it is a relatively new discovery and the cave spiders are rarely seen by humans. 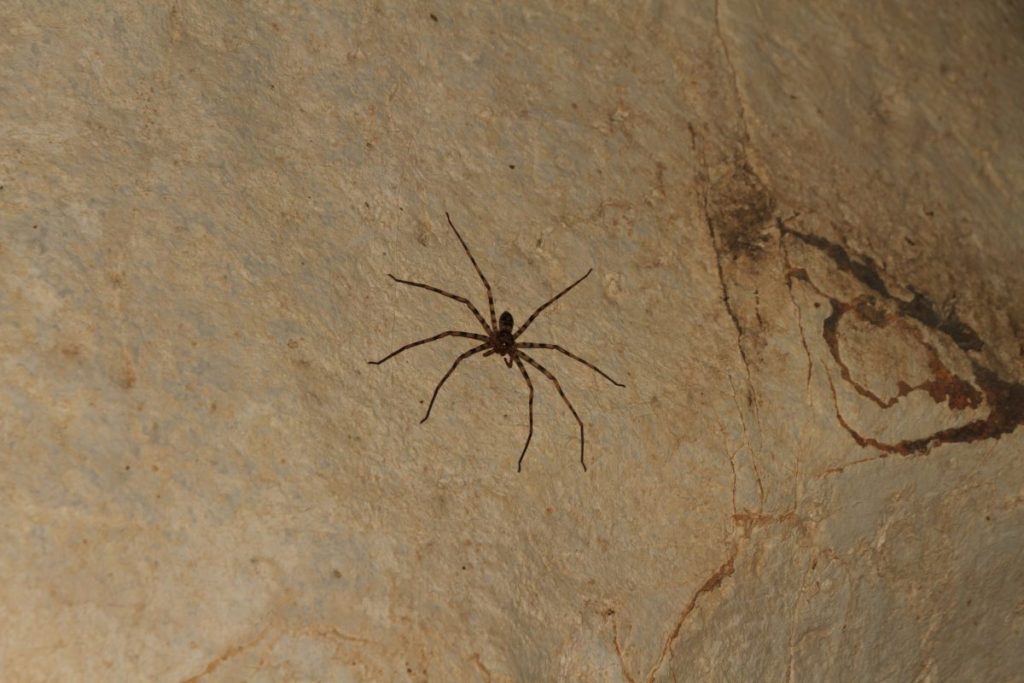 The Huntsman spider is notorious, especially in Australia. The large hairy body, unusual leg shape and movements similar to cartwheels and backflips while the spider is running can add up to a very frightening experience for some people. Accidents and unintentional off-road driving have been attributed to Huntsman spiders in vehicles. These industrious spiders have been filmed in homes catching and dragging lizards, mice, and birds. People have hurt themselves reacting to large Huntsman spiders appearing on windows or crawling on walls, and an Australian man drove his jeep into a pond after an enormous Golden Huntsman crawled across his windshield. It is important to remember that these spiders are not a threat to humans. 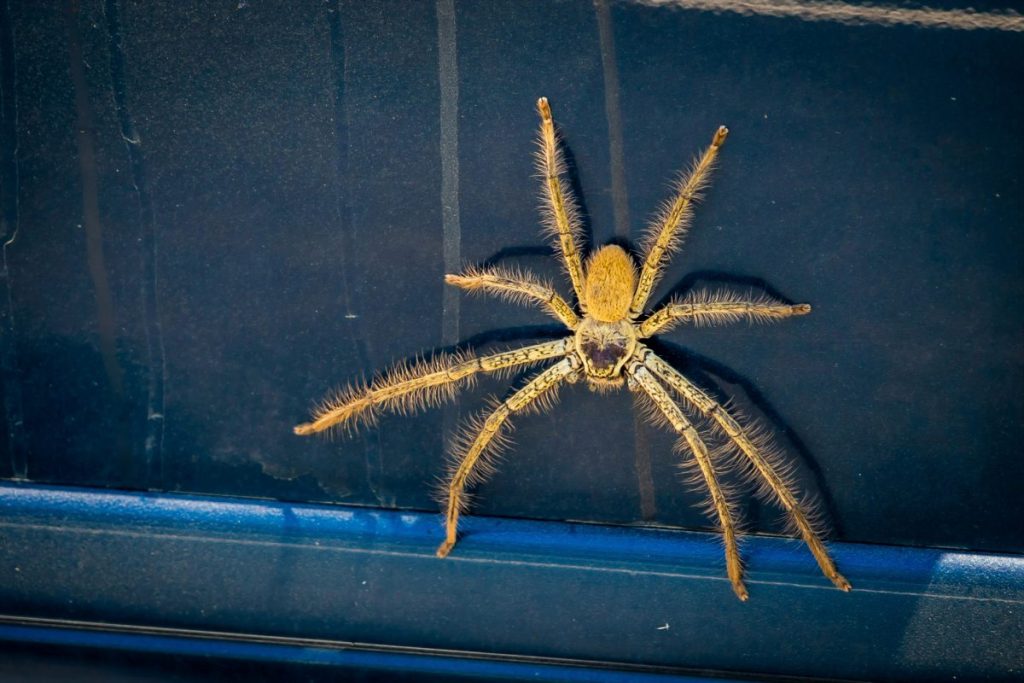