What Color is Jupiter?

Jupiter has long captured the imagination of Earth's inhabitants. This bright wandering celestial body half a billion miles away has influenced ancient myth makers and classical composers alike. Whose spine doesn't tingle at the sound of Gustav Holst's classic Jupiter?

Our name for the giant of the solar system comes from the Romans, who in turn translated the name from even more ancient Babylon who called it Marduk.

What color is this planet that has played such a role in Earth's many and varied cultures?

Jupiter consists of a mesmerizing blend of bands of milky white, reds, browns, yellows and many subtle shades between. The planet's unique mix of color is due to what is floating around in its atmosphere. Remember that as a gaseous planet, when we refer to the planet's color, we are actually referring to the color of the tops of its clouds.

As the sun's rays reach the planet's unique atmospheric layers, composed of a variety of elements such as hydrogen, helium, ammonia crystals and traces of water ice, all of these reflect different frequencies of the sun's light or the visible part of the electromagnetic spectrum. The result is a planet characterized by a beautiful blend of subtly shifting multicolored bands. 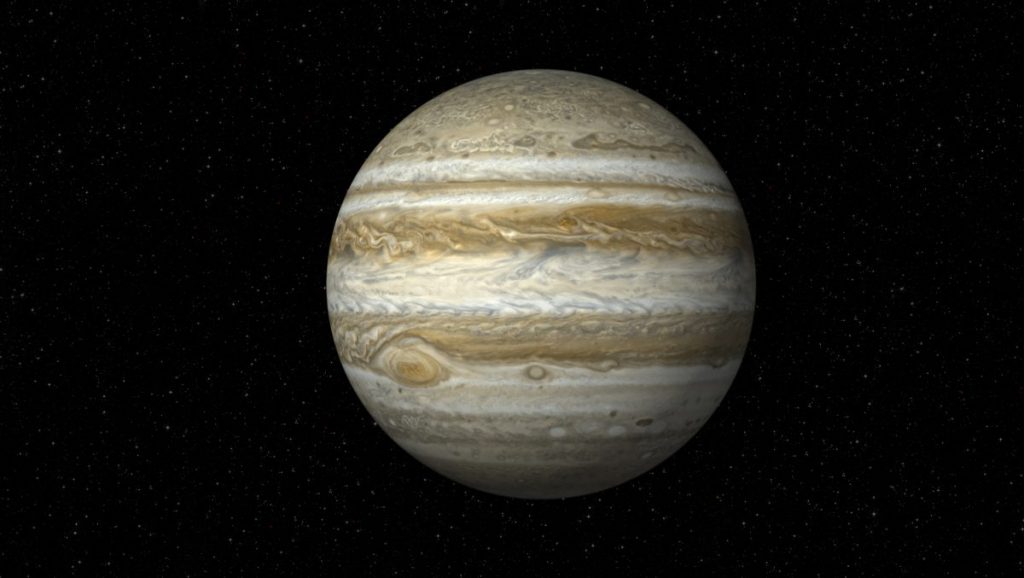 The planet’s convection currents create powerful storms on Jupiter. These colossal storms bring deeply submerged material such as phosphorus, sulfur, and hydrocarbons from deep down and closer to the planet’s core to the visible regions in the uppermost clouds.

It is these elements that cause the white, brown, and red spots that we see dotted and speckled across the Jovian atmosphere. 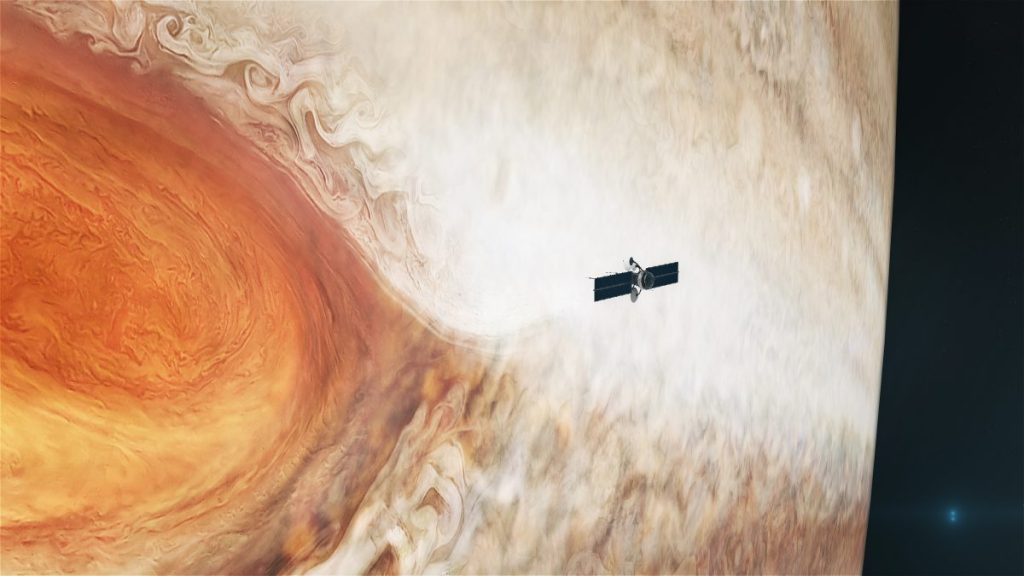 Due to the planet's powerful storms, elements normally gravitationally held closer to the core, are stirred up violently toward the higher visible regions. Not only do these Jovian storms result in the characteristic spots that characterize the planet, but also in a highly dynamic planet constantly changing. 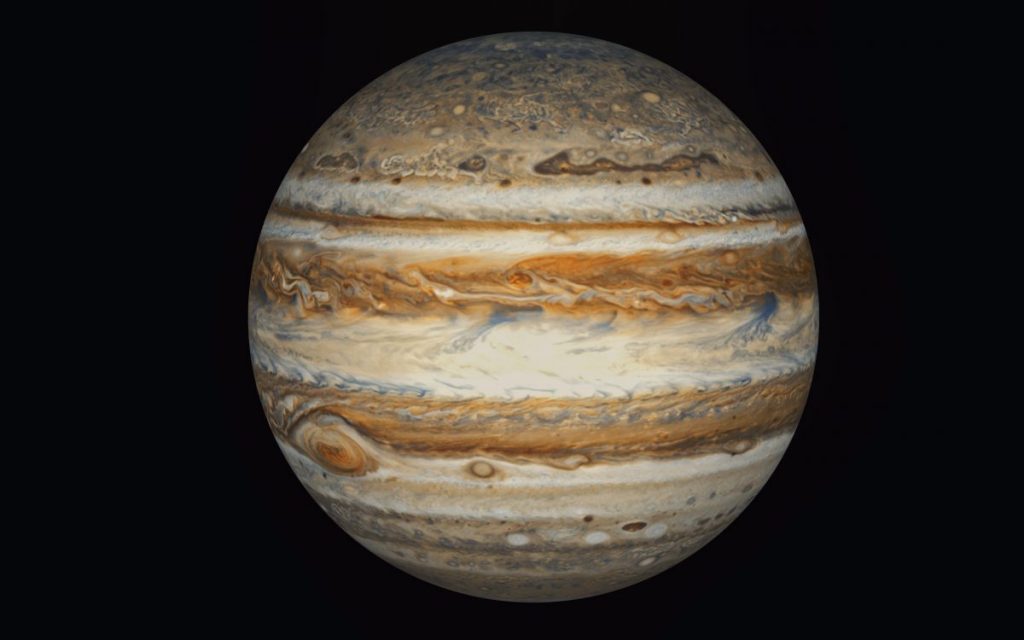 The famous Great Red Spot is the most well-known example of such storms. Believed to be a mere 400 years old, which is nothing in cosmic terms, the much-famed feature now appears to be shrinking.

Thought to have been first spotted by Giovanni Cassini some time in the late 17th century. Spectacular images started to be obtained in more recent times by NASA's Pioneer 10 in 1974 and with subsequent missions too.

A century ago the spot is believed to have been 40,000 kilometers in diameter, but now it is a little over half that. Just how long the great red spot will remain is unknown.

Equally unknown is quite why the spot is red. It is believed to be the result of a mystery contaminant. 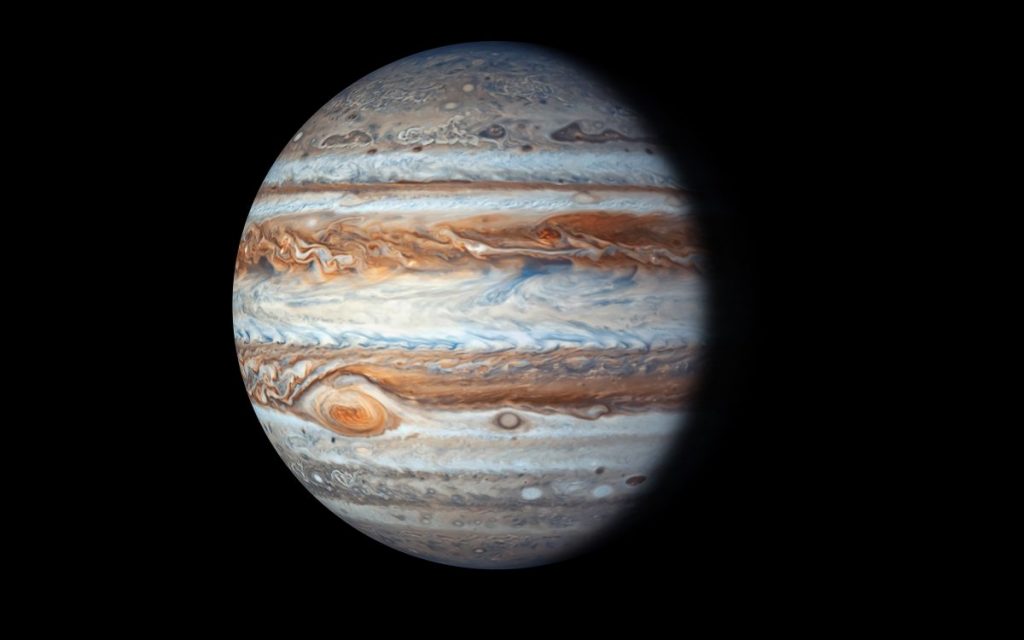 Should Jupiter's Great Red Spot ever vanish, all is not lost. Another red spot has been observed forming into a swirling red patch about half the size of the Great Red Spot. Dubbed Red Jr but officially known as Oval BA, this smaller spot was discovered in the year 2000 when three smaller spots collided. It's possible the Great Red Spot is the product of a similar amalgam centuries ago. 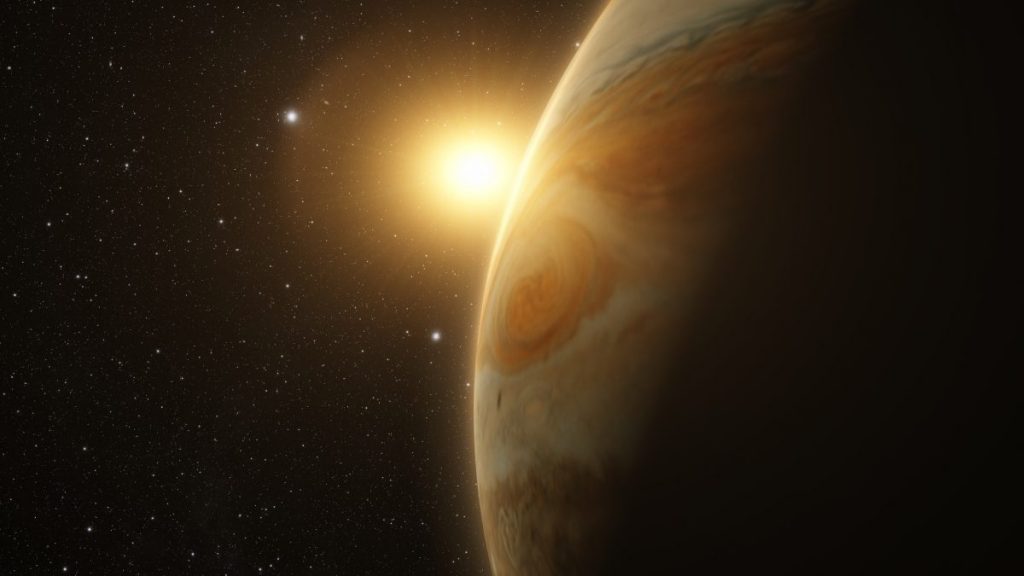 The characteristic bands that surround the planet make it look like a gigantic onyx stone hanging in the blackness of space. Powerful east-winds form these colored strips in Jupiter's upper atmosphere which may travel over 400 mph. It is frozen ammonia that gives the planet's clouds their whitish hue resulting in beautiful strips that envelope it. 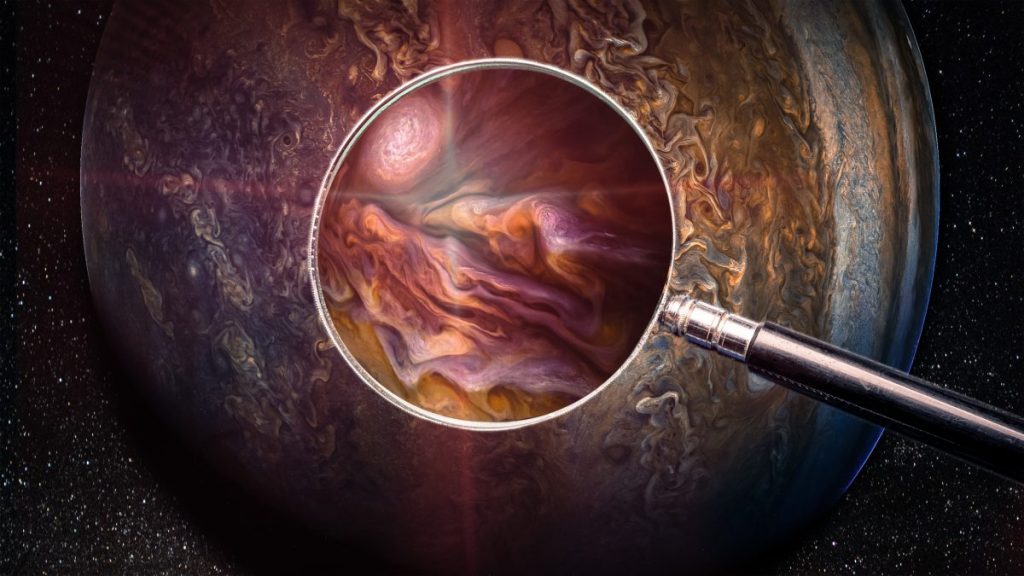 Each Color Tells a Story

Scientists are able to use the planet's colors to gain a deeper understanding of the way the planet's atmosphere operates. By analyzing the light and breaking it down, they are able to deduce what elements are present and theorize how this affects the atmosphere of the planet. In the near future, more missions will bring back even more data that will only add to Jupiter's story. 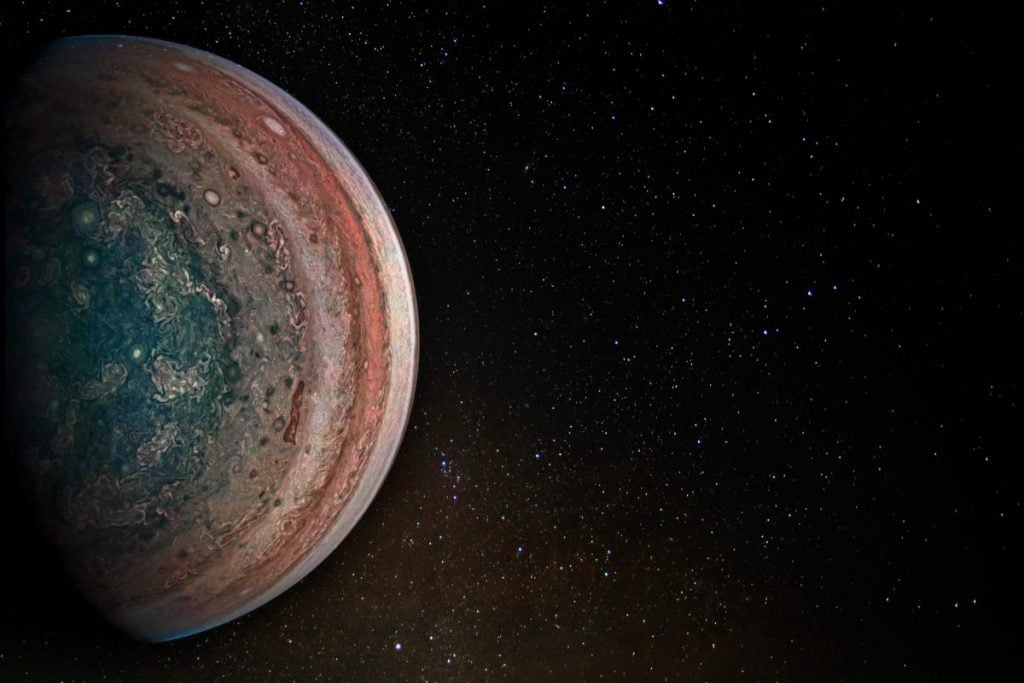 One of the key reasons for Jupiter's amazing variety of color is its atmosphere's diverse composition, which largely results from the planet's storms churning up deeply concealed materials. Powerful jet streams drive these storms from deep within the planet. These storms affecting the color of the planet can form in as little as one day according to some estimates. 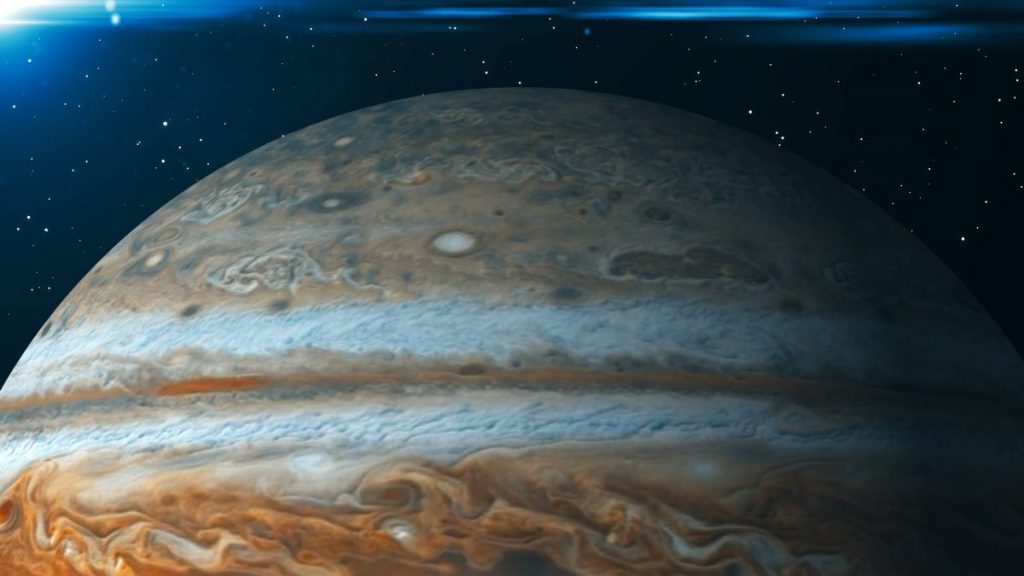 It turns out that Jupiter shares its ability to project a myriad of colors with its moon Io. Io experiences frequent volcanic eruptions which widely disperse the ground with sulfur and sulfur dioxide. This coverage of material gives Io a distinct yellow look with specks of black here and there. 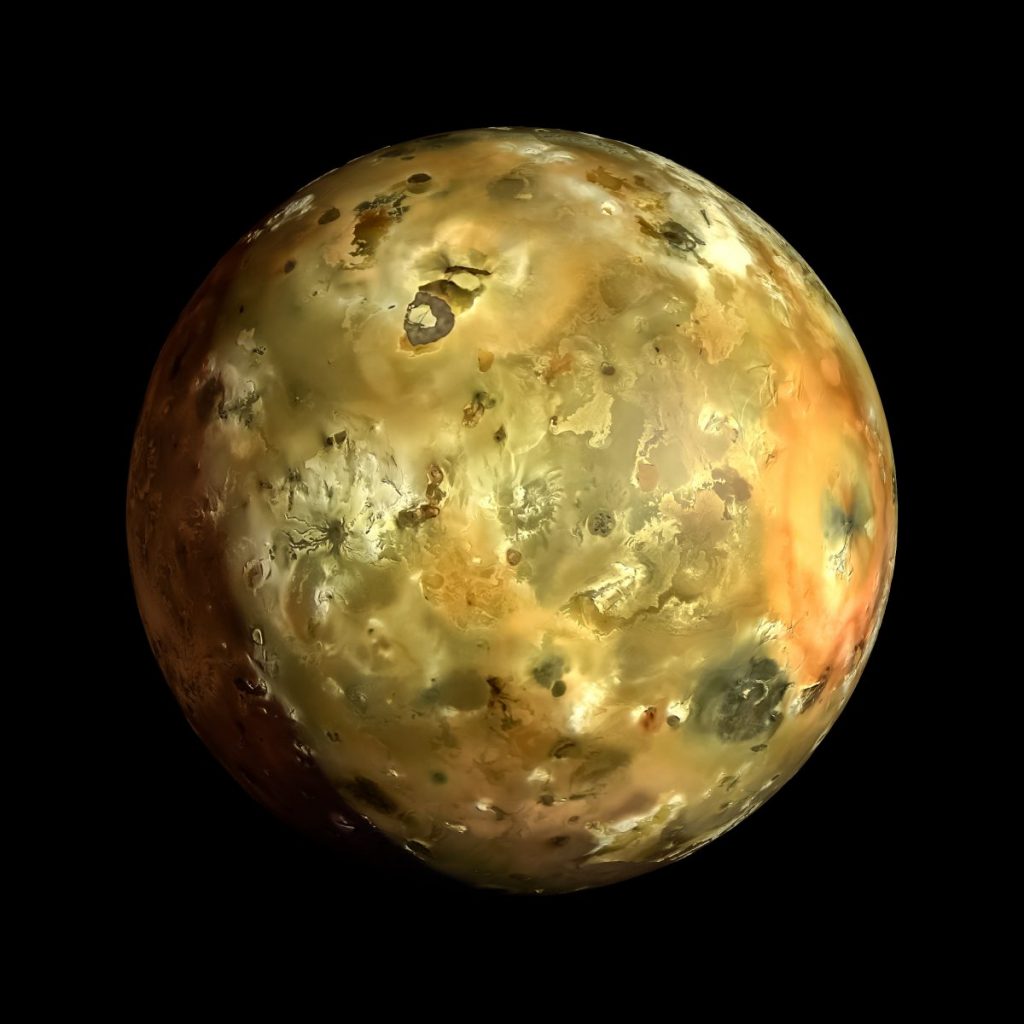 The String of Pearls

On May 19, 2017, NASA's Juno Spacecraft took some magnificent pictures of Jupiter from a relatively close twenty-nine thousand miles. The Spacecraft was positioned in such a way so that it overlooked the southern polar regions of the planet. One feature that appeared were four fascinating ovals of milky white, swirling storms known as the String of Pearls. The Juno Spacecraft is will orbit Jupiter some 32 times. No doubt more staggering images of our cosmic neighbor will come forth in time. 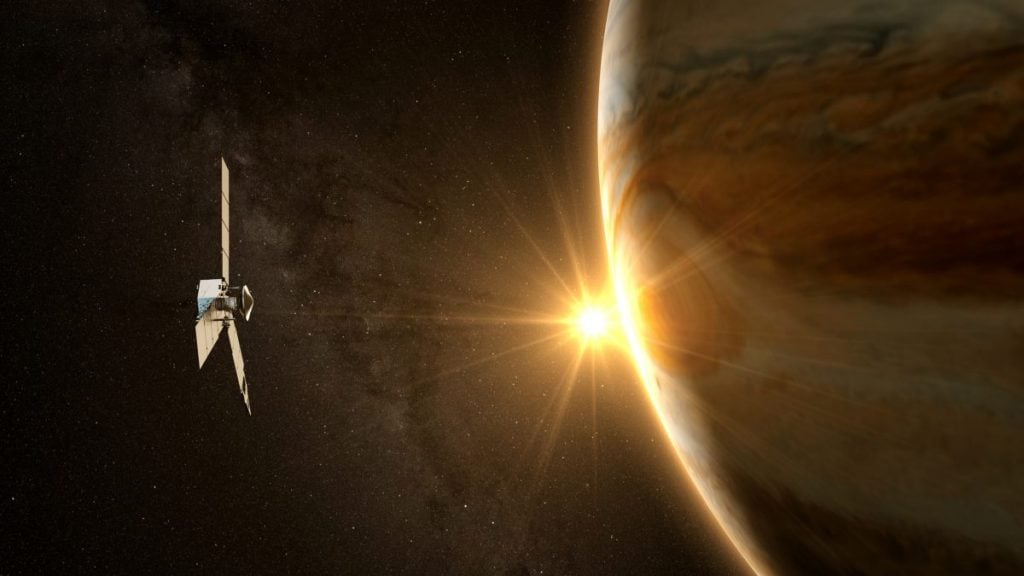