The alligator and crocodile are close relatives but distinctive creatures. Along with their obvious physical differences, alligators are found in a few limited places in the U.S. and China while the crocodile's habitat ranges across North America, to Asia, to Australia, and even Africa. Crocodiles are usually found in saltwater environments, while the alligator tends to live and eat in freshwater lakes, rivers, or marshes. Although both animals are in the crocodilian biological family, surprisingly, the ancient ancestors of birds, crocodiles are in the Crocodylinae sub-family group, and alligators are in the Alligatoridae family.

The head is the quickest way to identify whether an animal is a crocodile or alligator. Crocodiles have longer, narrower heads with a V-shape. Alligators have a more rounded U-shape to their heads. Look at the mouth. The jaw of the crocodiles is the same length on the upper and lower portions, making the teeth visible even when they close their mouths. This gives them an almost evil grin. Alligators have small depressions in their upper jaw where the lower teeth fit, so when they close their mouths, no teeth are visible. 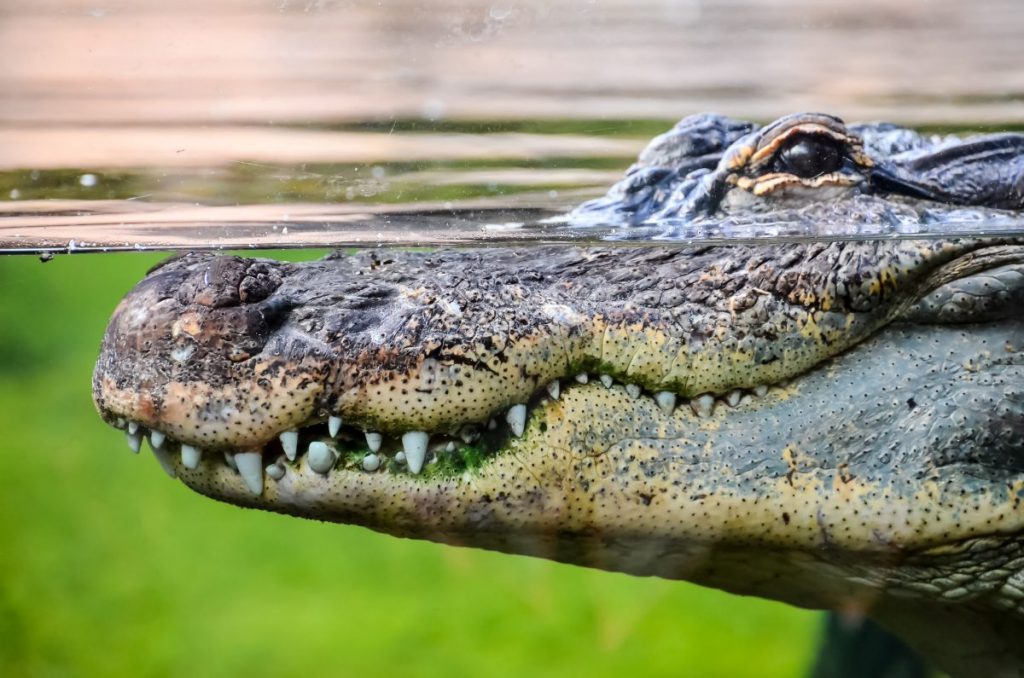 What's in a Name?

The words we use to describe each of these animals are different, but they actually mean the same thing in different languages. "Crocodile" is derived from the ancient Greek word "crocodilos," which translated means "lizard," or more precisely "lizard of the Nile." The Romans called them crocodeilos, a word roughly translated to mean "pebble worms," which allegedly describes how Egyptian crocodiles would bask on the river banks. Alligator comes from the Spanish word "el largarto," meaning "the lizard." The name was bestowed upon the creature by early Spanish explorers who found them in the swamps of Florida. 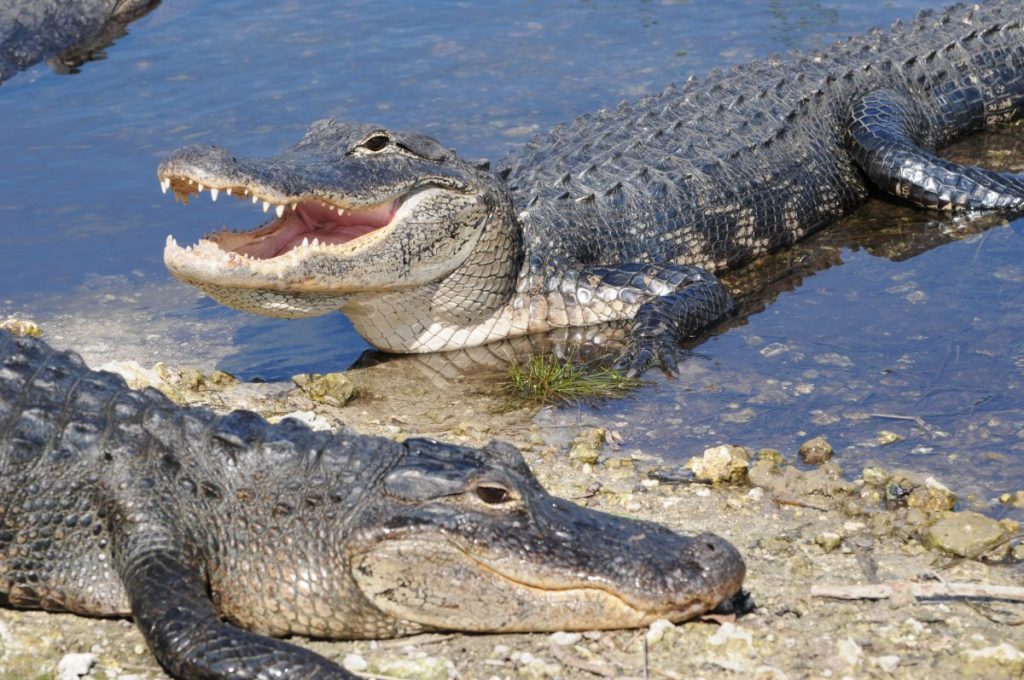 Where Do Alligators Live?

Alligators can be found mostly in the Southeastern United States, from North Carolina to Texas. One species of alligator lives almost exclusively in the Yangtze Valley area of China. The Chinese alligator is considered an endangered species. The vast majority of American alligators reside in two states: Florida and Louisiana. Each state counts a population of some one million alligators. South Florida is the only place where alligators and crocodiles live nearby one another. 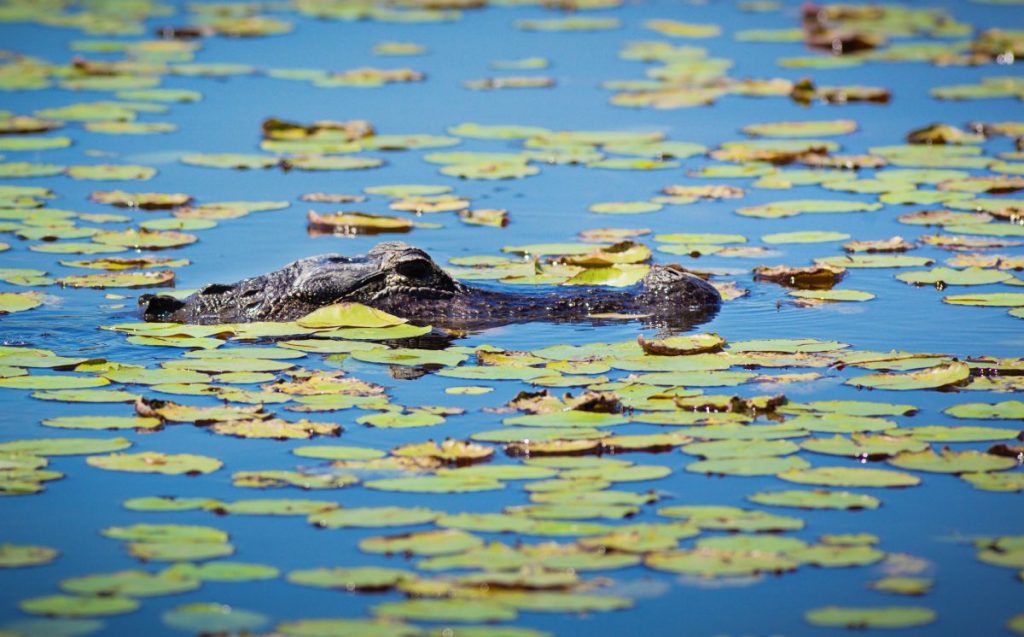 Where Do Crocodiles Live?

There are 14 distinct species of crocodile living mostly along the coasts of Asia, South America, Central America, and Australia. In Africa, Indonesia, and India, crocodiles live across the entire country. Crocodiles are extremely sensitive to cold temperatures and are therefore confined mostly to equatorial regions. These reptiles are designed to live in salt water -- they possess specialized salt glands that filter out the salt. 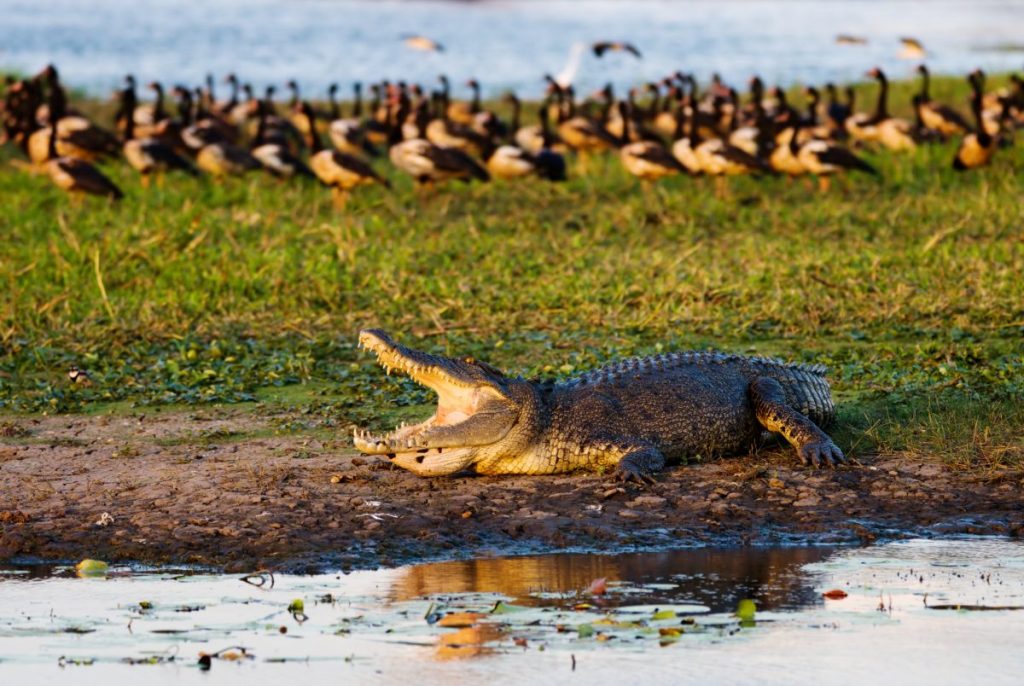 How Big are Alligators?

The average length of an American alligator is just over 13 feet. However, they often grow to 14 feet or longer. The largest alligator ever caught in the wild was 19.2 feet long. American alligators weigh in at an average of 790 pounds, and the largest ever recorded tipped the scales at nearly one thousand pounds. The Chinese alligator is much smaller, averaging under seven feet in length and weighing just 99 pounds. 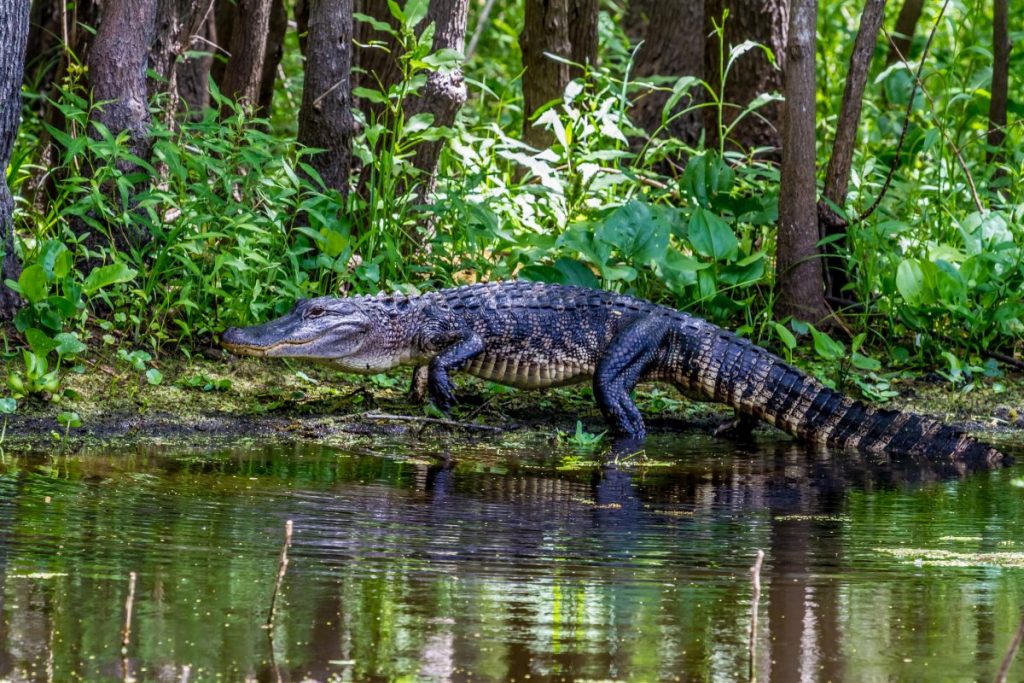 How Big are Crocodiles?

Size greatly varies among species of crocodiles, from the dwarf crocodile (averaging less than five feet and under 100 pounds) to the saltwater crocodile, who can grow as long as 23 feet and weigh well over two thousand pounds. This is the largest species, and inhabits eastern India, northern Australia, and other areas of Southeast Asia.

What do Alligators Eat?

Alligators eat a variety of prey, depending on their age and size. Young alligators feast on small fish, insects, crustaceans, snails, and worms. As the alligator matures, it consumes larger animals such as turtles, larger fish, and semi-aquatic mammals like muskrats and coypu. There have been rare reports of alligators attacking and devouring humans as civilizations continue to encroach on the alligator's native habitat. Most attacks occur in Florida. 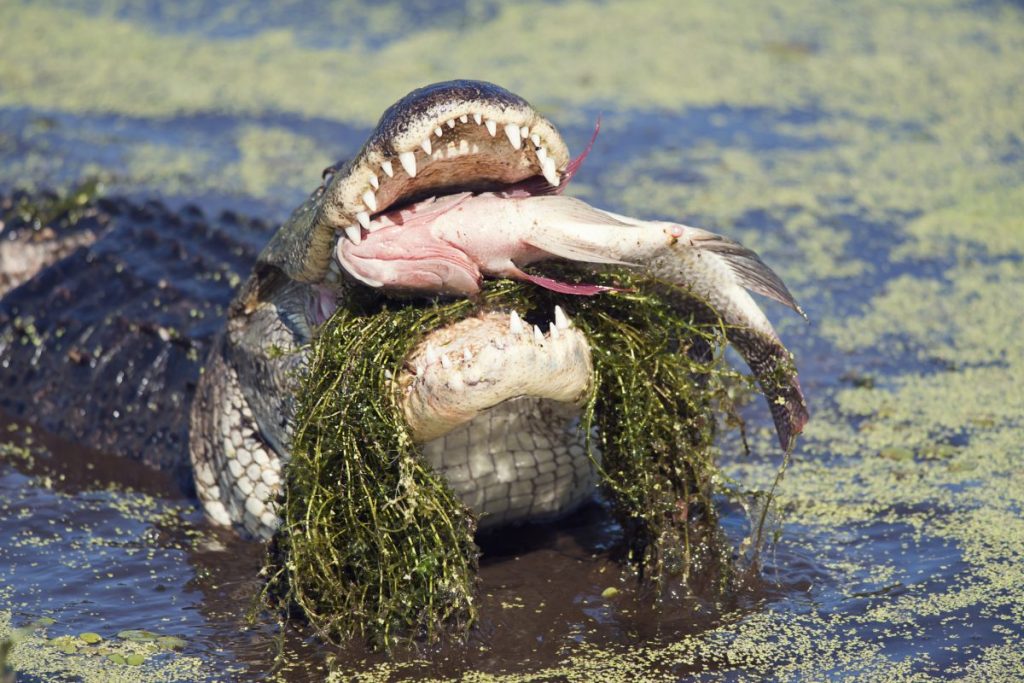 What Do Crocodiles Eat?

These carnivorous animals prefer to dine on vertebrates such as fish, reptiles, birds, and mammals, with an occasional mollusk or crustacean. Crocodiles often attack large mammals such as deer, buffalo, and wild boar. Large crocodiles have been known to attack sharks and big cats. The animals ambush predators, which means they lie motionless, often for hours, until the prey comes close enough for the assault. 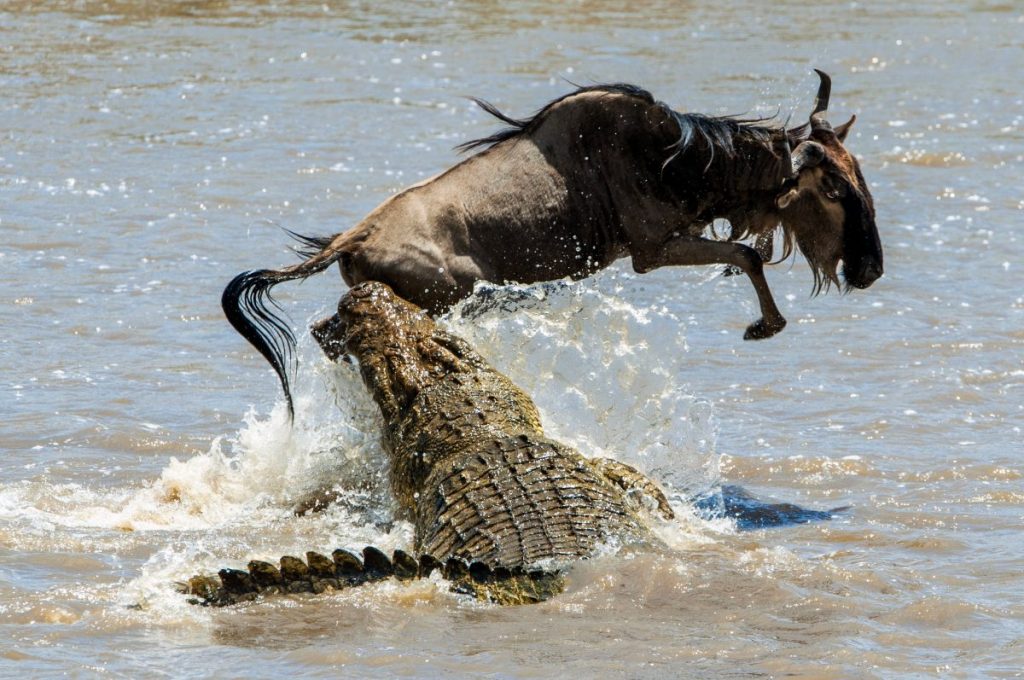 Every year, there are hundreds of reported crocodile attacks in Egypt. One study put the number of Nile crocodile attacks at 745 annually, with a fatality rate of 63 percent. In India each year, large numbers of people are killed by the mugger crocodile. Saltwater crocodiles take many human victims in Australia and Indonesia. Conversely, there were only eight deaths from alligator attacks in the U.S. in the last decade. 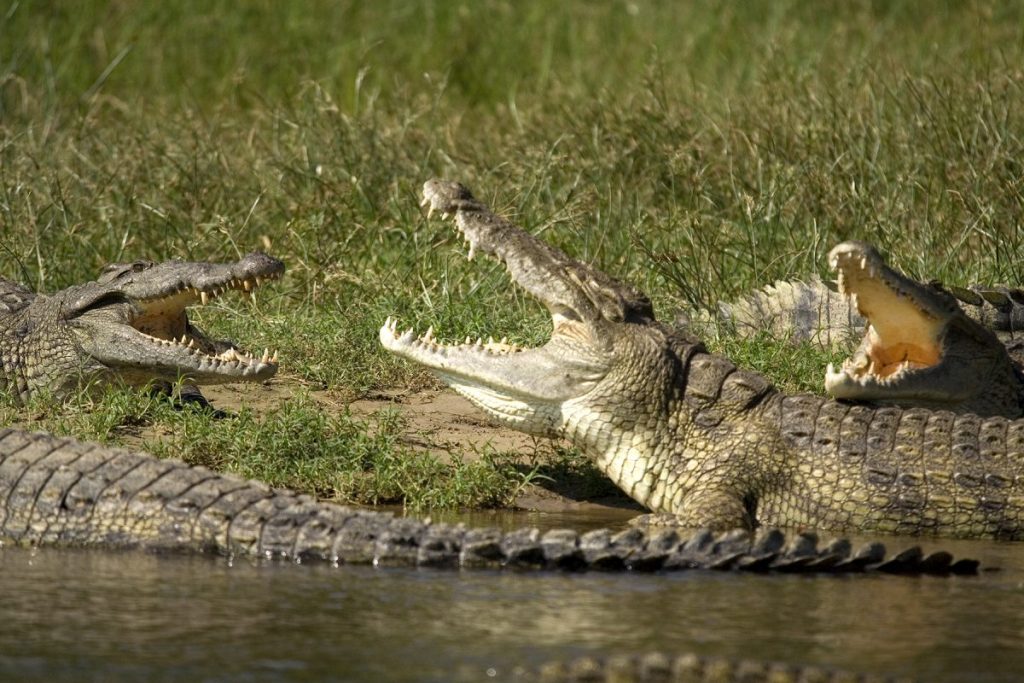 How Long Do They Live?

Crocodiles are thought to have an average lifespan of 30 to 40 years, although larger species can live for up to 100 years. One Russian zoo is home to a crocodile believed to be 115 years old, while a saltwater crocodile in an Australian zoo is said to be 140 years old. Scientists have yet to discover the average lifespan of an alligator. The oldest known specimen is an alligator housed in a Serbian zoo. Muja came to the zoo in 1937, making him more than 80 years old. 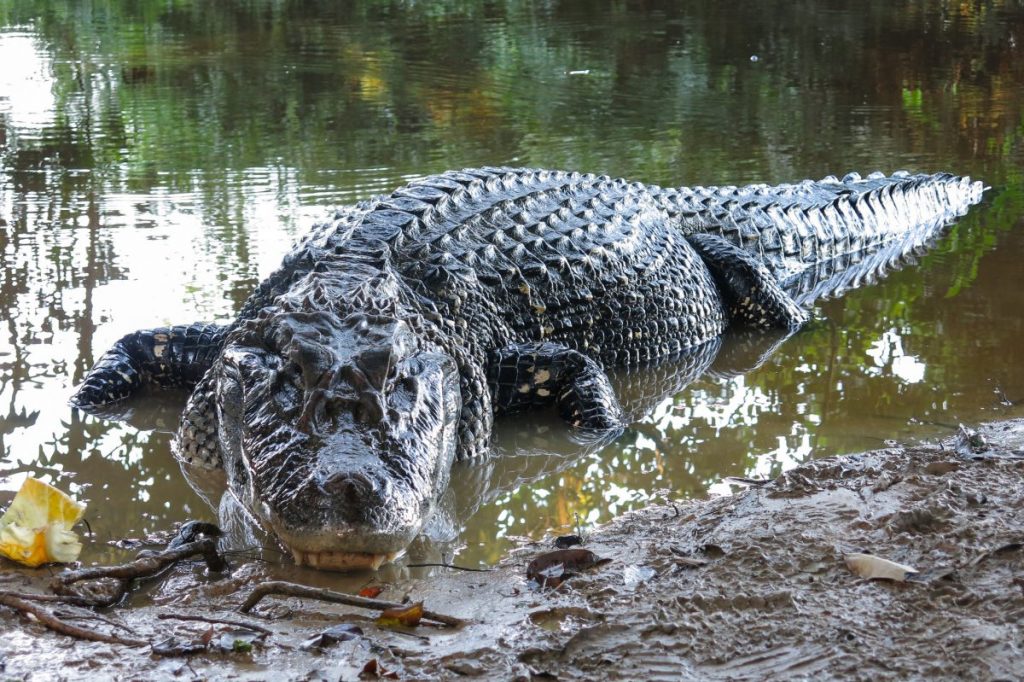