Are Garter Snakes Dangerous to Humans?

The common name 'garter snake' refers to over a dozen species of the genus Thamnophis.Most species are classified as non-venomous. Garter snakes are not dangerous to humans and are often described as completely harmless.

A few species have neurotoxin in their saliva that may cause swelling and itching if a person is bitten. An allergic reaction is possible, although it is very rare. Garter snakes are common pets. It is thought they were named for stripes that look like garters men used to hold up their socks at one time. However, it may also be a corrupted version of the German word for garden.

Garter snakes are small to medium-sized with about 23 to 30-inches in length. Occasionally a garter snake will grow up to five feet long. Their scales are keeled, which means there is a ridge down the center of each scale. Most species have three longitudinal stripes. The stripes are usually green or yellow, but othe colors may occur across species. Several species of Garter snakes have bi-colored tongues. There is usually a symmetrical split, so each color covers half the tongue. 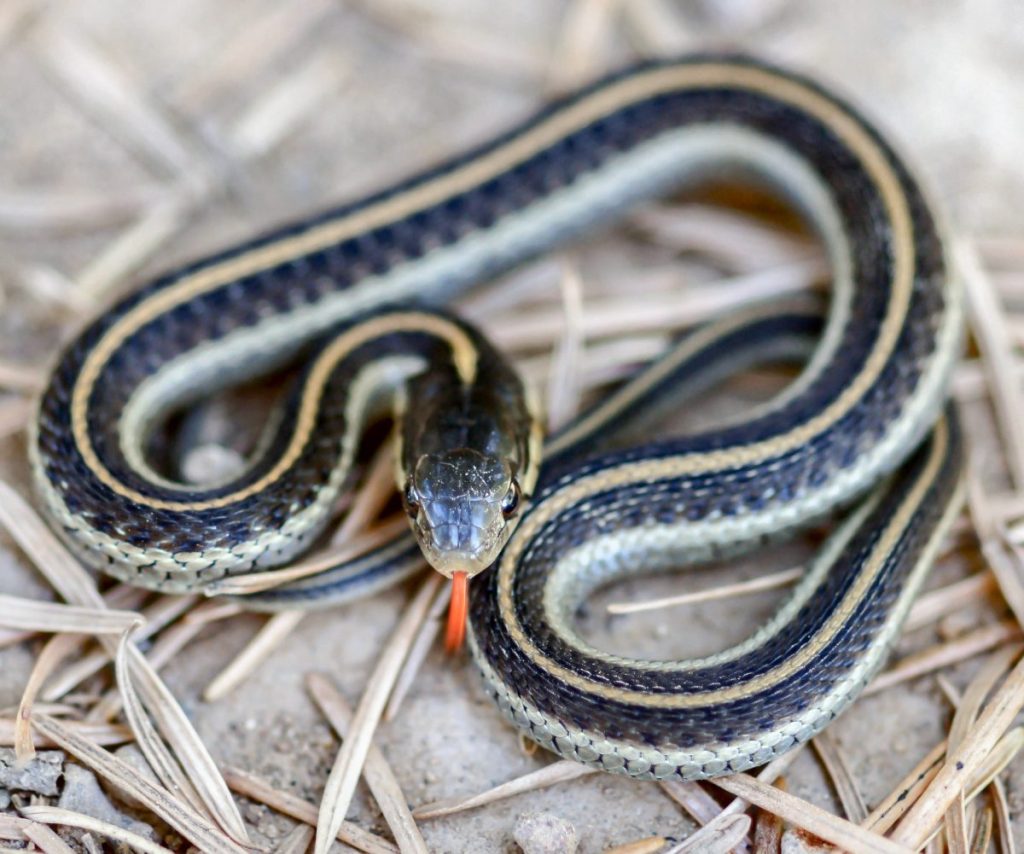 Garter snakes are found throughout North America and southern Canada. They are especially plentiful in the eastern United States, and the garter snake is the state reptile of Massachusetts. There are no snakes native to Alaska, but a garter snake was found dead on a road around Haines, Alaska in 2005. Garter snakes live in a wide range of habitats including forests, meadows, and grassy knolls. They prefer to be near a water source. 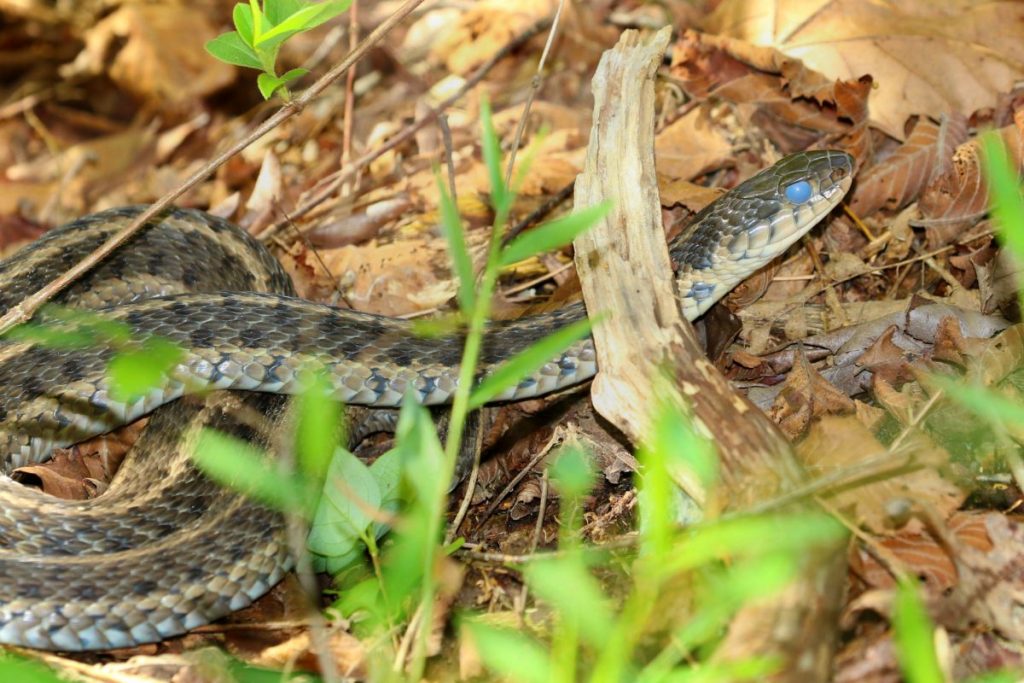 Garter snakes are diurnal, meaning they are active during the day. They move quickly and some species can climb shrubs and vines. Several species of garder snakes are also skilled swimmers. The more aquatic species are very skilled hunters and catch frogs, salamanders, and fish with ease. The harmless garter snake has been known to trigger mass exits of screaming swimmers in summertime months. Garter snakes resemble the much more dangerous cottonmouth snake when they are darting through the water chasing prey. 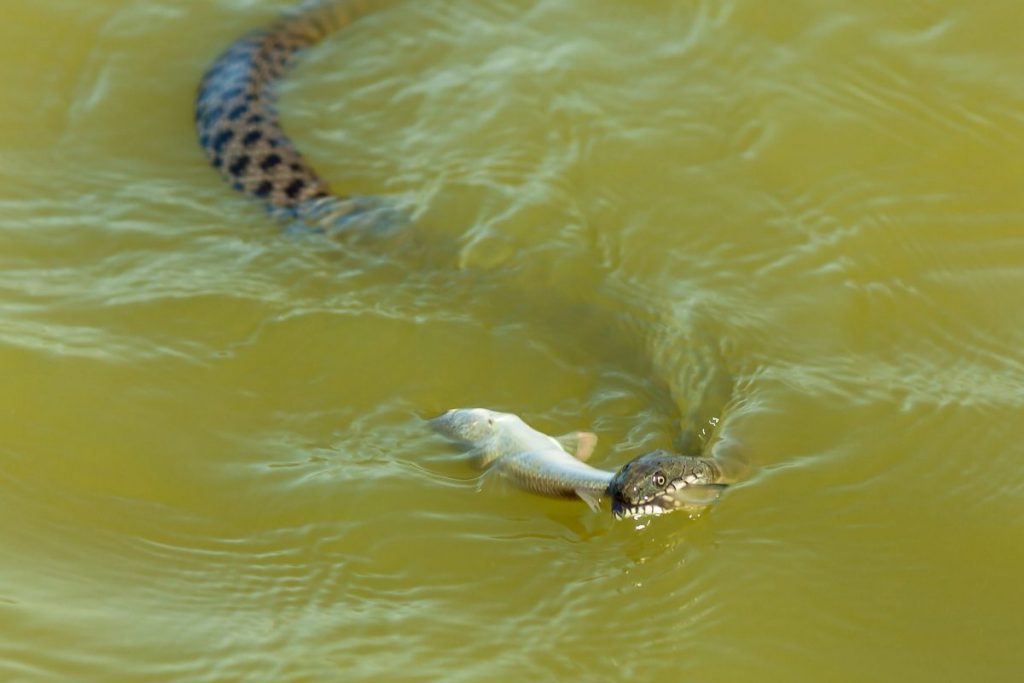 Garter snakes are vulnerable to numerous predators because of their small size. Hawks and crows favor garter snakes as common prey animals. Snapping turtles and bullfrogs feed on aquatic garter snake species, while bears, foxes, squirrels, and raccoons eat them occasionally. A garter snake can react to threats with a foul-smelling musk. Their only other defenses are striped camouflage and attempting to disappear quickly into the underbrush. Garter snake population stay relatively stable because they have many offspring each year.

Garter snakes living in cold climates hibernate through the winter months. They hibernate in large groups that may contain hundreds of snakes. The largest group ever recorded was in Canada and contained over 8,000 snakes. Several garter snake species and a few other snake species hibernate together and will travel long distances to reach a large communal den. These snakes have a tendency to hibernate underneath homes. They usually avoid basements because they are very shy, but rooms built with no basement underneath are perfect for them. It is a very startling experience to see hundreds of snakes slithering away from one's home in spring. 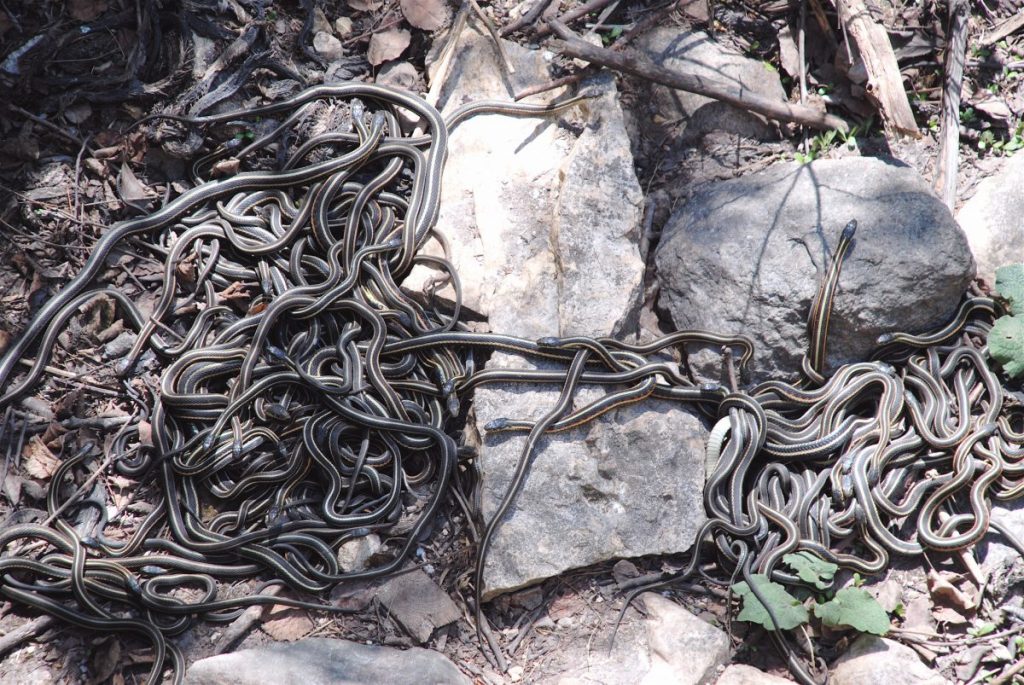 Garter snakes have very sharp teeth and fast reflexes to grasp prey, and they swallow their food whole. The saliva of some species contains a mild neurotoxin that causes paralysis. Typical prey includes fish, amphibians, and earthworms. Garter snakes occasionally catch larger prey they kill by dragging and chewing. Captive garter snakes are usually fed crickets. Rats are much too large for them, and mice aren't favored prey. 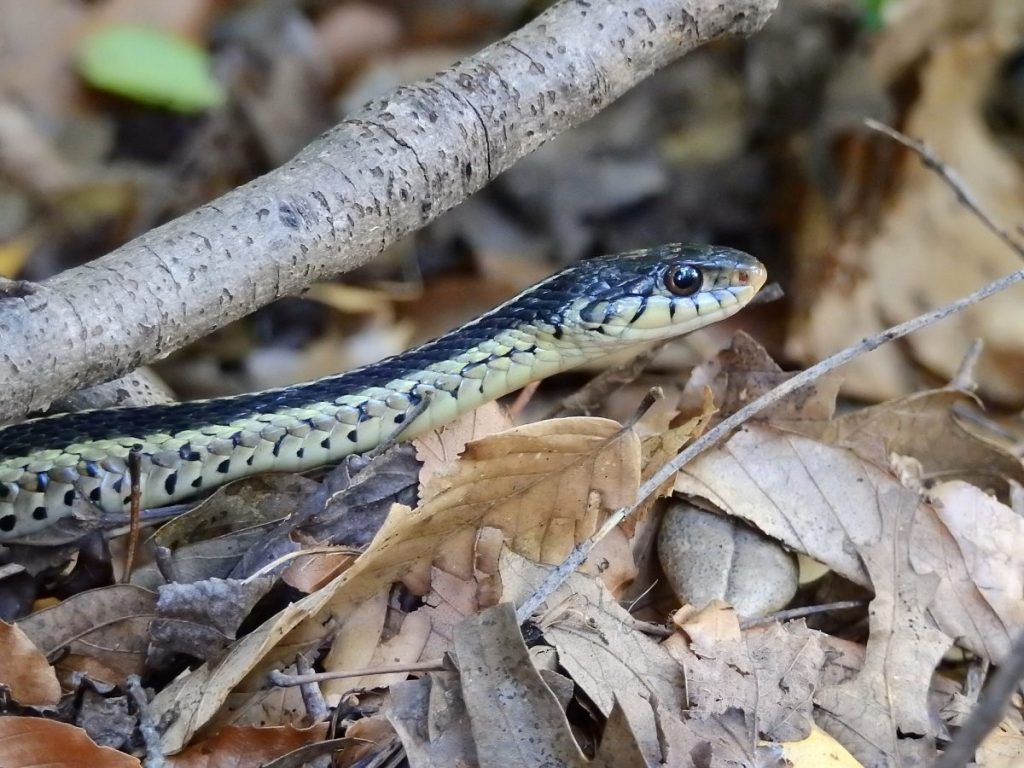 Mating in cold climates takes place almost immediately after the snakes come out of hibernation in the spring because they are congregated together. They also mate in the fall before hibernating. Garter snakes in warmer areas that do not hibernate find mates using pheromones.

Female garter snakes release pheromones and dozens of males flock to each female. This dynamic has led to many panicked home-owners fearing their properties are overrun with snakes. The frenzied mating over a short time is called a 'mating ball.' 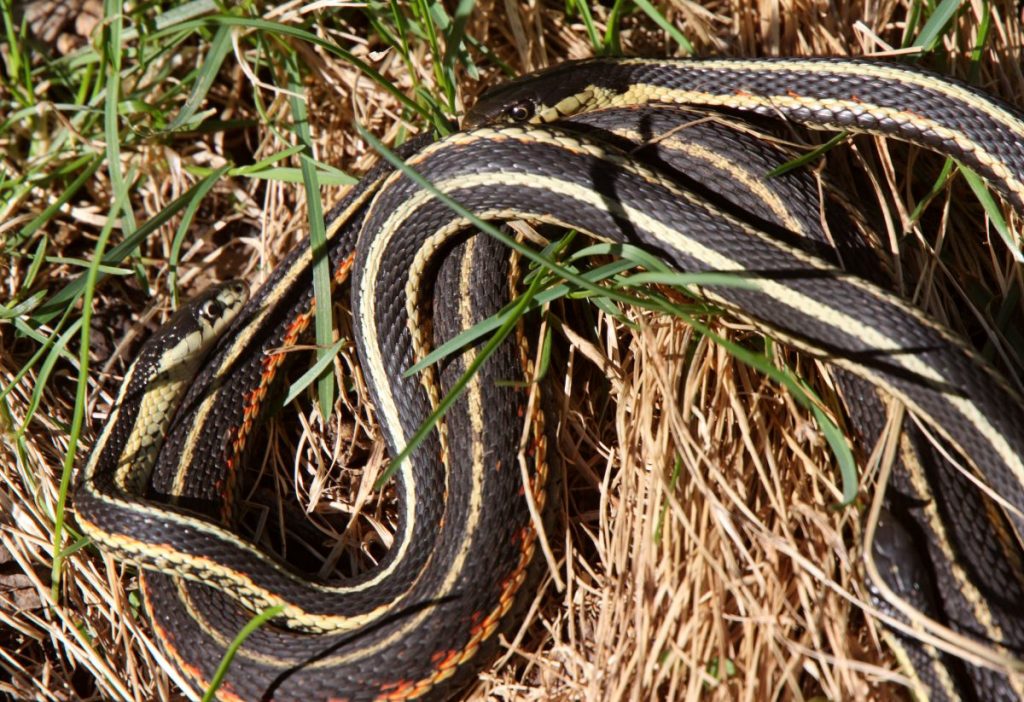 Some male garter snakes improve their odds by secreting female hormones. They use the pheromones to draw other males away to lessen the competition for females. The snake posing as a female rushes back to the mating ball after leading the other males away. The classification of garter snake species isn't clear or linear. Different classifications have been developed and discarded as new information is found. A great deal of the confusion and repeated attempts at classification come from discovering multiple species within the same mating ball. It is possible that there really aren't many separate species of garter snake and they just express a variety of different color patterns. 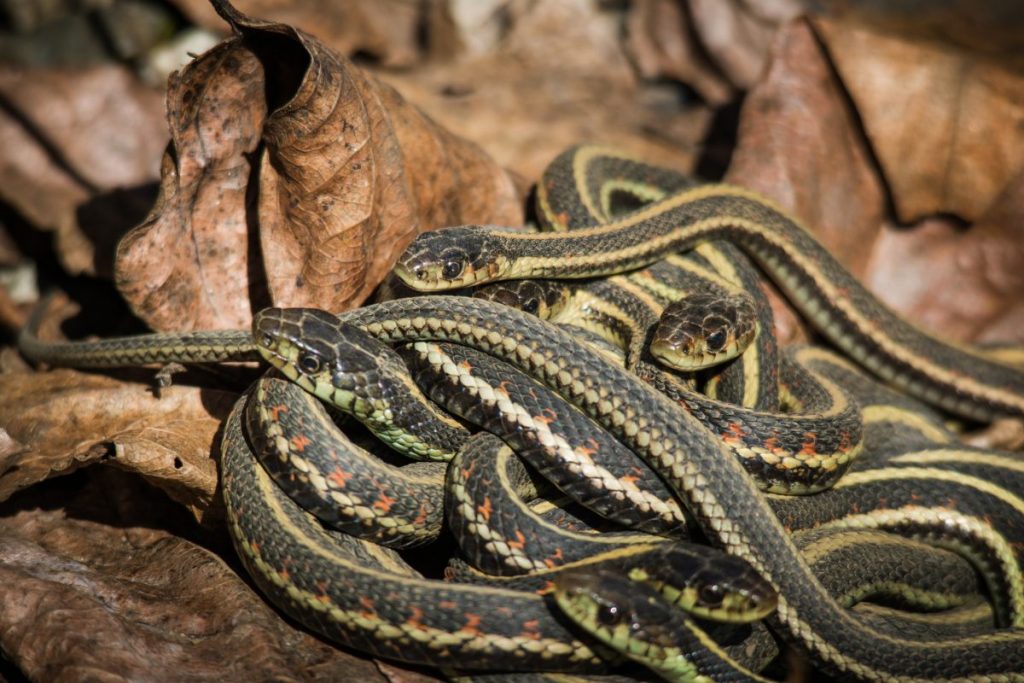 Garter snakes are ovoviviparous. This means they have live young instead of laying eggs. The female snake stores sperm after mating and chooses a time and place for fertilization. Garter snakes have an average of 20 to 40 young at a time, although there are outliers. Births of 101 young have been recorded. The hatchlings are independent at birth because garter snakes do not parent young. 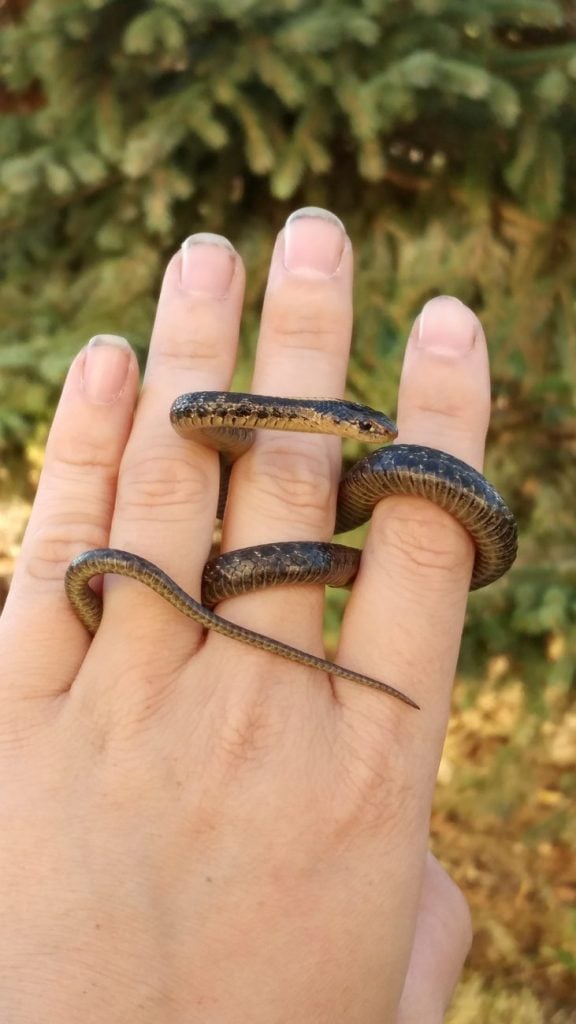 Many snakes in North America and across the world are threatened, endangered, critical, or near extinction. Numerous species have been lost entirely. The garter snake experiences many of the same threats to its existence as other species, including a widespread pet trade. Fortunately, garter snakes are so common and able to live in so many different environments that they are considered of 'least concern' for extinction by the International Union for the Conservation of Nature's Red List of Threatened Species 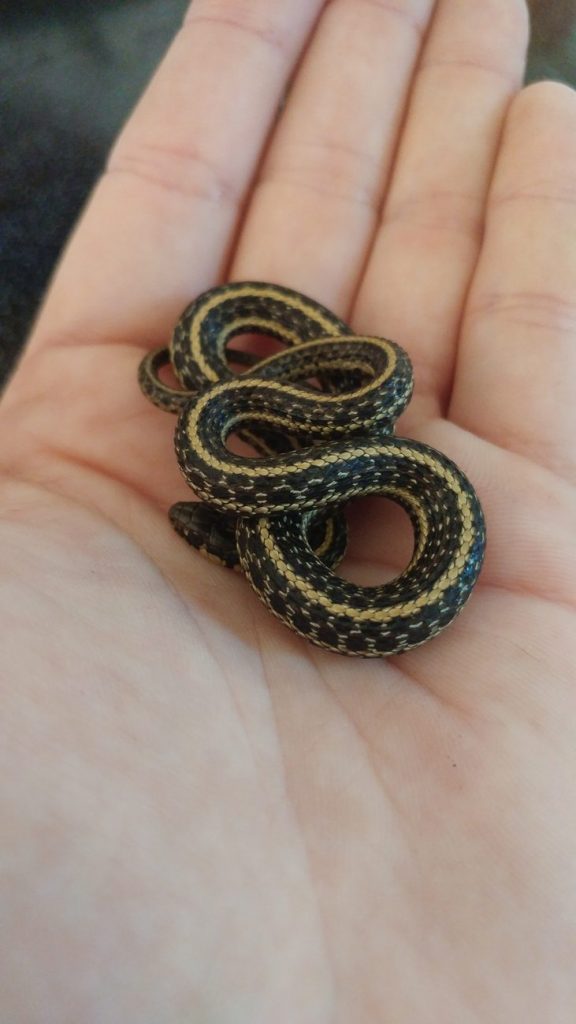