Light Up Your Yard With a Japanese Maple

If you want to add bold color in your yard, a Japanese maple tree is a beautiful way to make a statement. These trees come in a variety of sizes and feature stunning leaves in an array of vibrant colors, including red, orange, yellow, and purple. As the days shorten and the weather turns colder, these trees really begin to show off. Their foliage turns positively fiery as autumn begins. Versatile in size and shape, the Japanese maple is a slow-growing, long-lived tree ideal for landscaping.

As is clear from the name, Japanese maples originally all came from Japan. They grow wild there in the shade of larger trees in Japanese forests. They are also found wild in China, Korea, Mongolia, and Russia. However, it was in Japan that gardeners began to actively cultivate and breed these trees, eventually creating many new and interesting varieties. 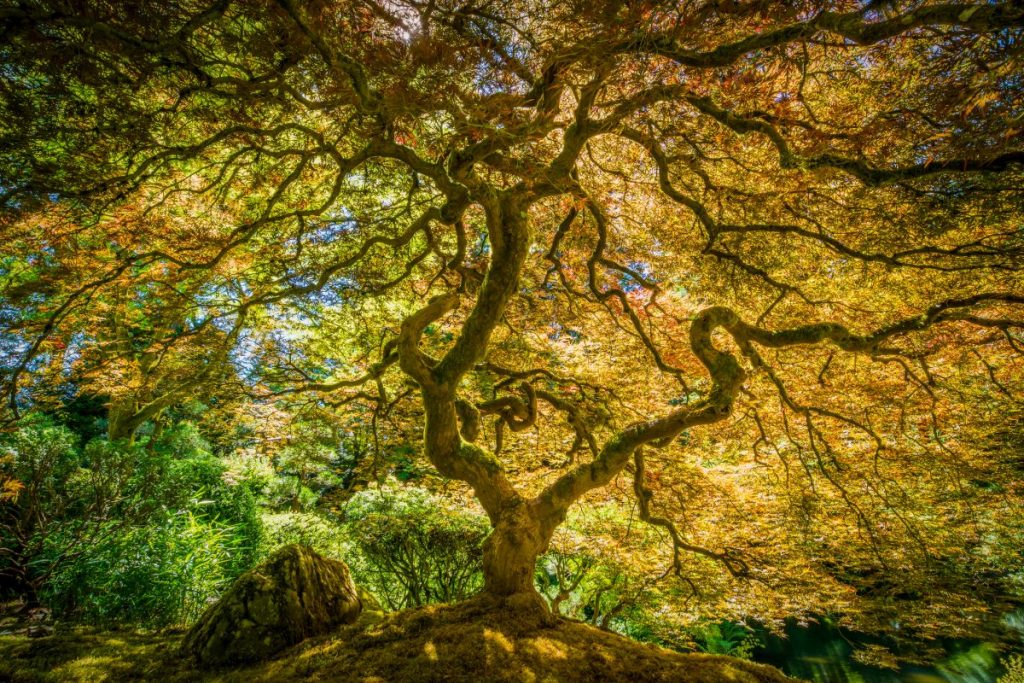 The Japanese maple has been an important plant in Japan for centuries. There is evidence that the Japanese became aware of them as early as the 7th century. In Japan, the tree is often called the "autumn welcoming tree." Maples are often planted on the western side of gardens since the Japanese traditionally believe that fall comes from the west. 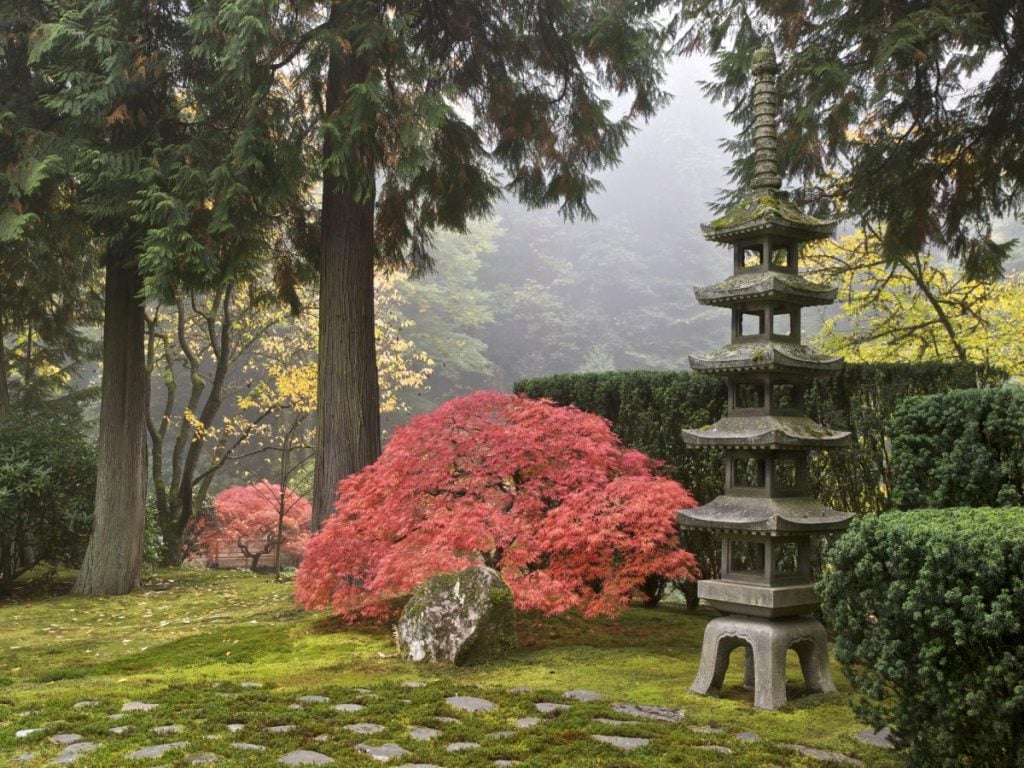 The Japanese begin cultivating the tree in the 1700s, and over time, they created an array of interesting leaf shapes and tree sizes. However, these beautiful maples were not known in the west until they were introduced to England in 1820. Now, these trees brighten up yards, parks, and other outdoor landscapes in countries all over the world. 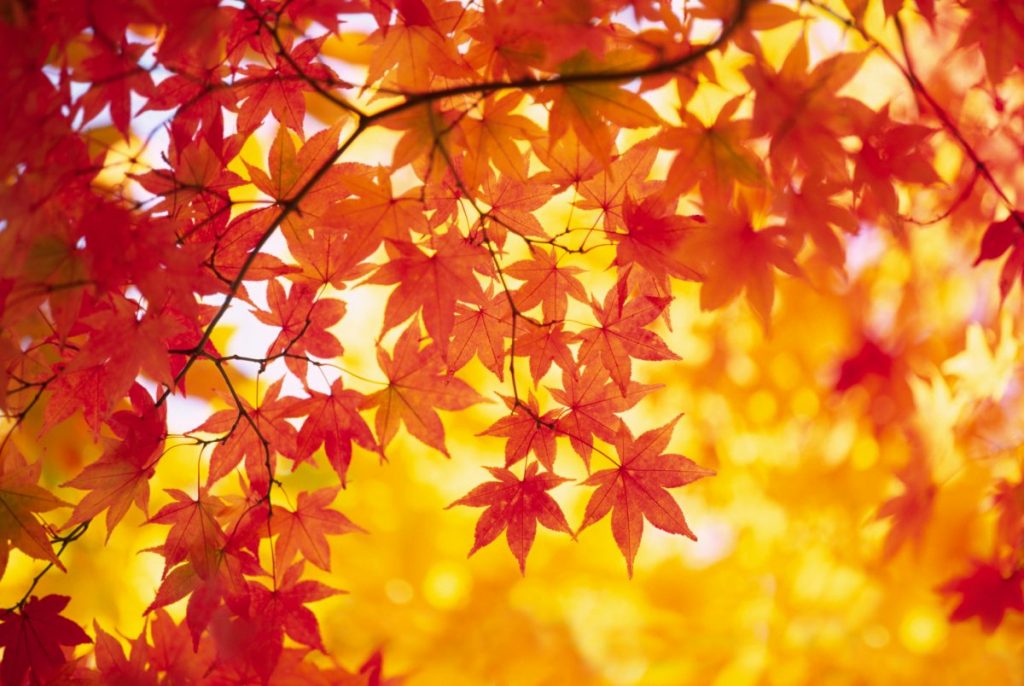 Including hybrids, there are over 1,000 cultivars of the Japanese maple available today. Though all Japanese maples are generally smaller trees when compared to their sugar maple cousins, they can vary in size from a 2-foot dwarf tree to a stately 30-foot variety. Some types can even be grown in large containers or kept as bonsai specimens. 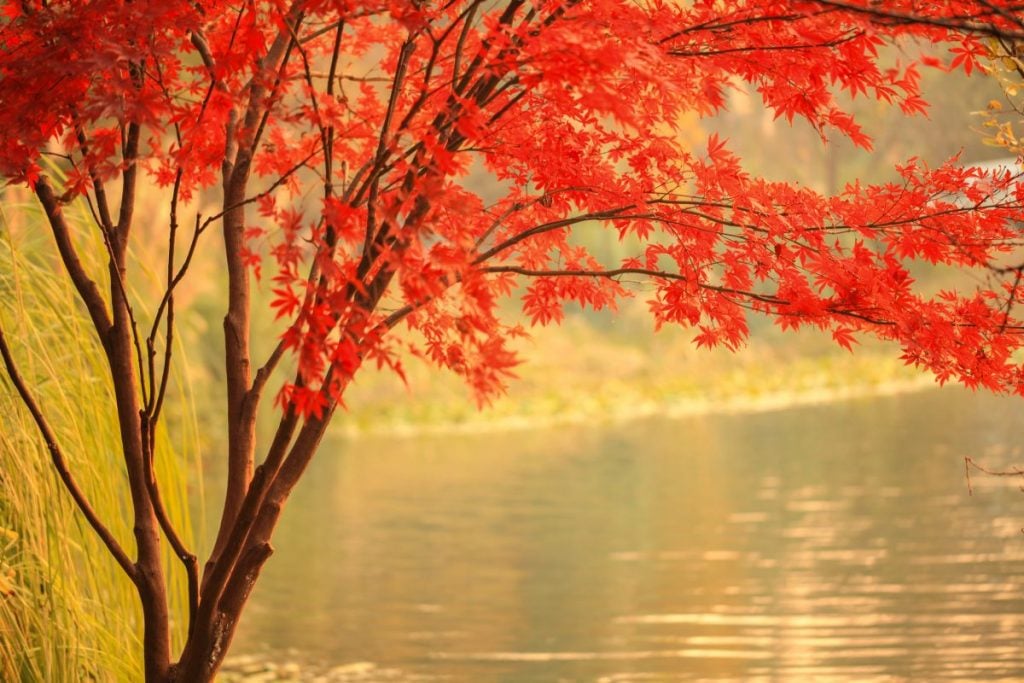 With so many types to choose from, it can be hard to pick a favorite. Here are a few of the most popular Japanese maple cultivars: Red Dragon: Suited for USDA zones 5-8, this tree features serrated leaves that turn from deep purple to bright red in the fall. Ideal for containers, this is a slow-growing tree that only reaches about five feet tall. Waterfall: This heat-tolerant variety features weeping green leaves that turn a shockingly bright red-orange in the fall. It's cascading shape gives it its name.

Fireglow: This showy Japanese maple variety boasts bright red foliage throughout spring, summer, and fall. Best for zones 5-8, it can grow up to ten feet tall and wide. Autumn Moon: Another heat-tolerant variety, this tree begins with pinkish-orange leaves in the spring that transition to a deep scarlet by fall. Reaches up to 8 feet tall when grown in the ground or 6.5 feet tall in a container. Sumi Nagashi: This airy tree is also called "Lion's mane" and can reach up to 15 feet tall. Its leaves start red in spring, turn darker during the summer, then transition to a bold crimson for autumn. 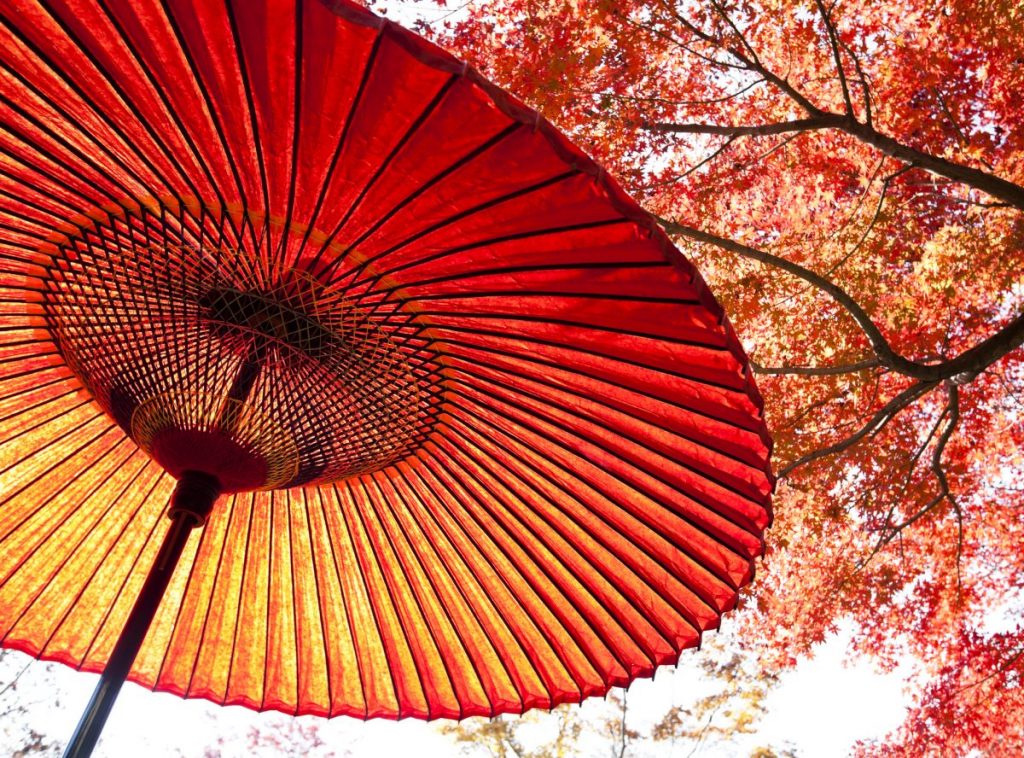 How to Plant a Japanese Maple

Planting should be done in the fall or early spring while the trees are still dormant. Be sure to select a site where the soil drains well, and that is protected from strong winds. A site too sunny can cause burn marks on your leaves, so opt for partial shade when you can. Once you've chosen your spot, dig a hole twice as wide as the root ball and just deep enough that the top of the root ball is flush with or just above the hole. Fill in the hole well and tamp it down after making sure the trunk is straight. If you experience high winds, consider staking your young tree to help it get established. 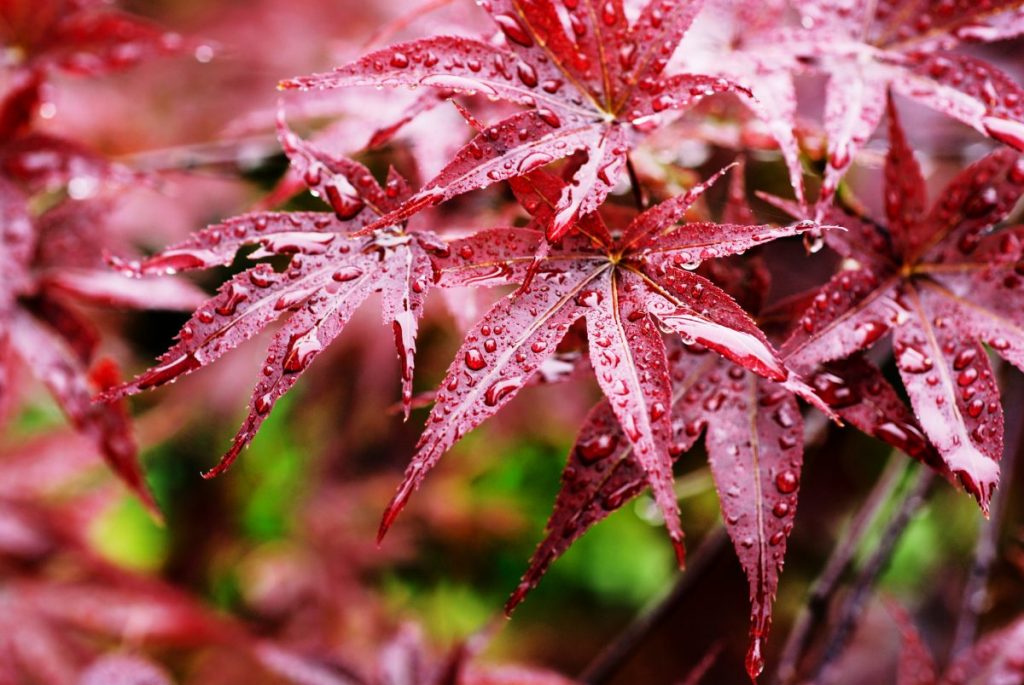 Caring for Your Japanese Maple

Fortunately, Japanese maples have very few insect or disease problems and tend to be low-maintenance as long as the initial planting spot meets its needs. Maples do like mulch to protect their roots from heat and cold and to help keep moisture in the soil but remember to keep mulch several inches away from the trunk. Avoid fertilizer during the first year, so the roots have time to get established, but a nitrogen-based fertilizer works well after that if applied in early spring. Younger trees grow more quickly since the growth rate slows with age. 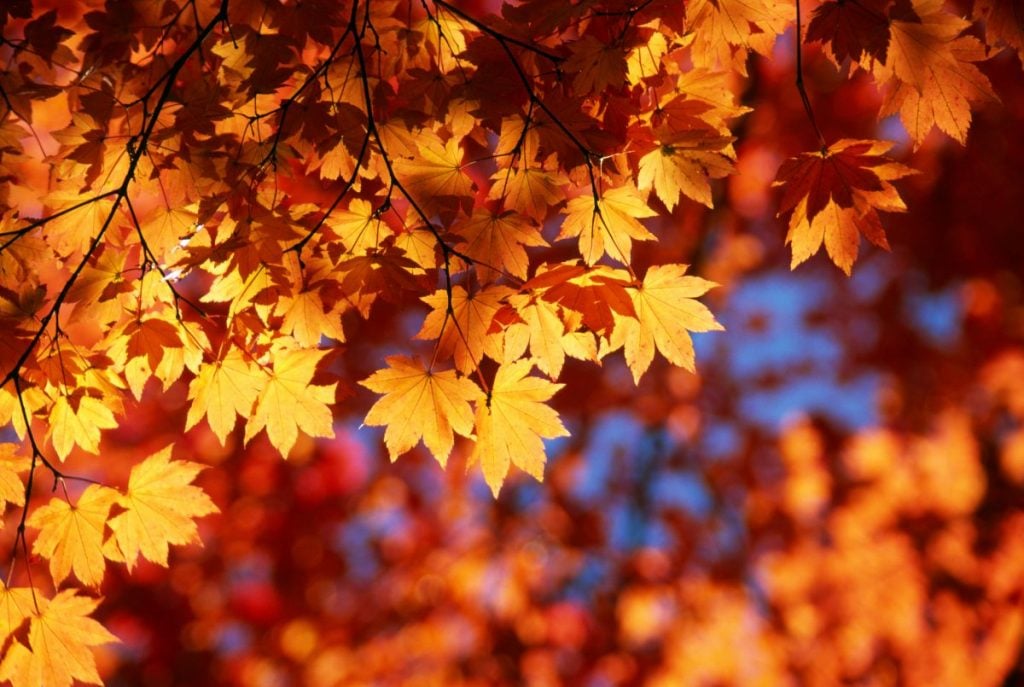 Japanese maples have both male and female flowers on the same plant, which cuts down on the pollen. These flowers, which form reddish, umbrella-shaped clusters, are small. Many people don't even notice them when they arrive in late spring. After pollination, the tree forms a winged seed called a samara. Samaras ripen between September and October and are scattered by the wind. 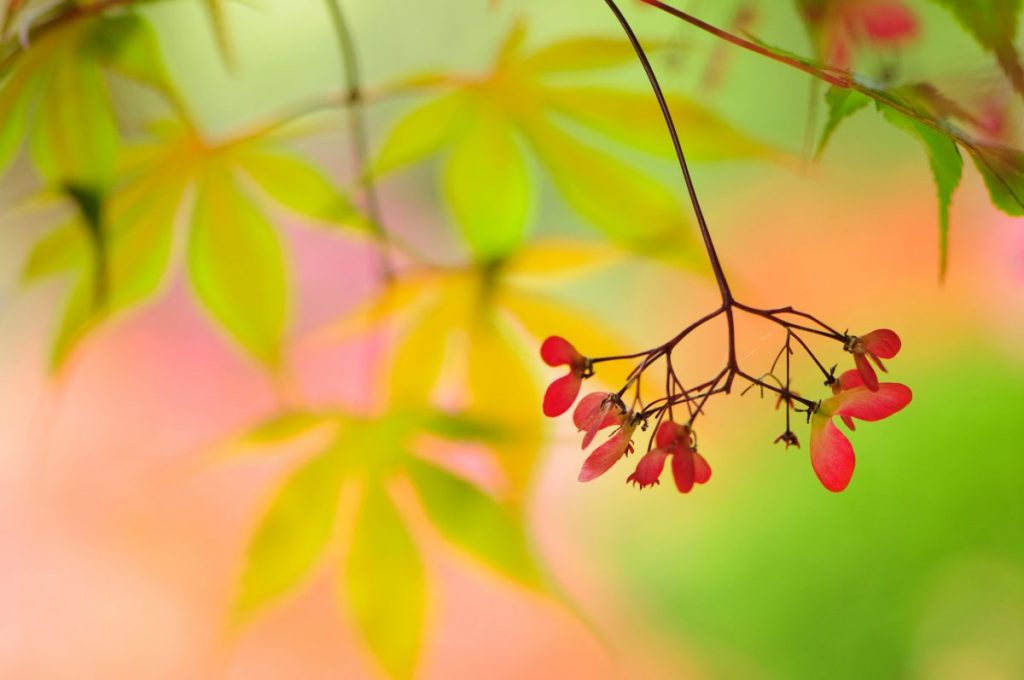 Though they are slow-growing, Japanese maples can live to be over 100 years old. Samaras, the maple seeds, look and act like propellers when they twirl to the ground. Children often enjoy playing with these in the spring. Pretty, papery maple leaves are used to make bouquets and decorations in Japan. Fried maple leaves are a popular Japanese snack. They are prepared according to a traditional recipe where they are dipped and fried in tempura batter. 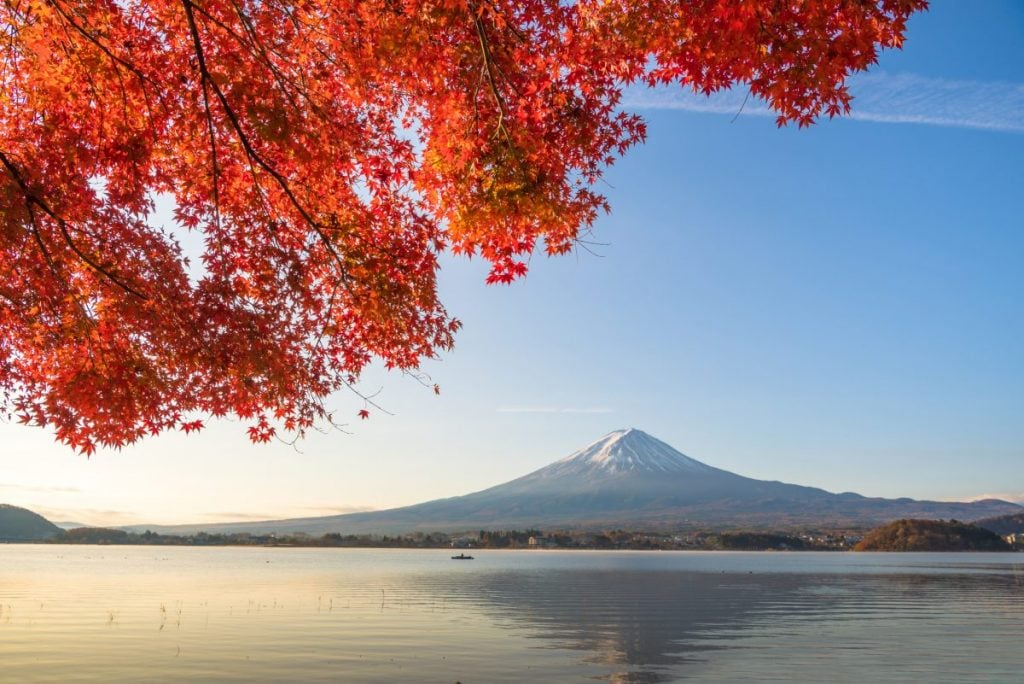