How to Care for Your Calla Lily Throughout the Year

Calla lilies are flowers that have so many meanings that stretch back all the way to Ancient Greece. The name "calla," for instance, is Greek for beautiful, which is probably why the goddess Venus supposedly cursed the flower with an unsightly pistil out of jealousy. Traditionally, it's a symbol of marital bliss and devotion, making it a great choice for bridal bouquets and for marking sixth wedding anniversaries. But, as many beautiful things, it has a darker side.

The calla lily is native to South Africa, Lesotho and Eswatini, formerly known as Swaziland. In some areas, it is considered a food source when cooked. In the African wetlands, the plant can grow as high as six feet, and despite being revered and prized in many western countries, callas are considered weeds in Africa. 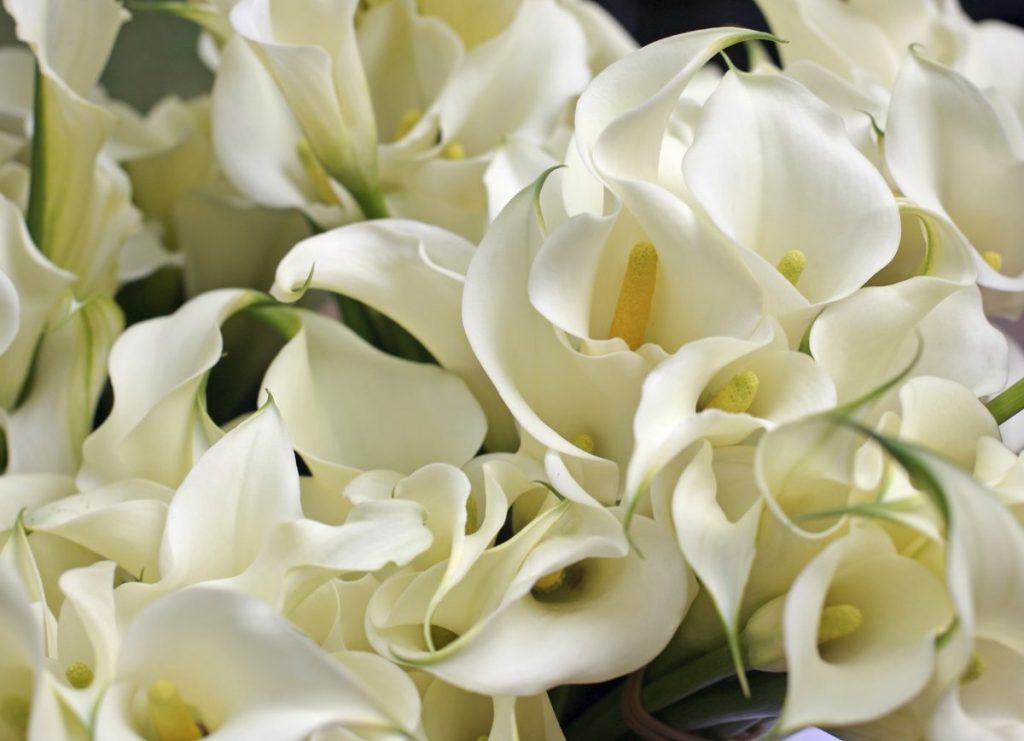 One of the more ironic things about the calla lily is that it isn't really a lily. The scientific name of the white calla lily is Zantedeschia aethiopica. It's from the araceae, or arum, family of plants, which originate in Southern Africa. True lilies are from the liliaceae family, which go back to the Late Cretaceous era. The naming error came when an 18th-century Swedish botanist mistakenly named the flower calla lily. By the time it was corrected, the name had already become popular. 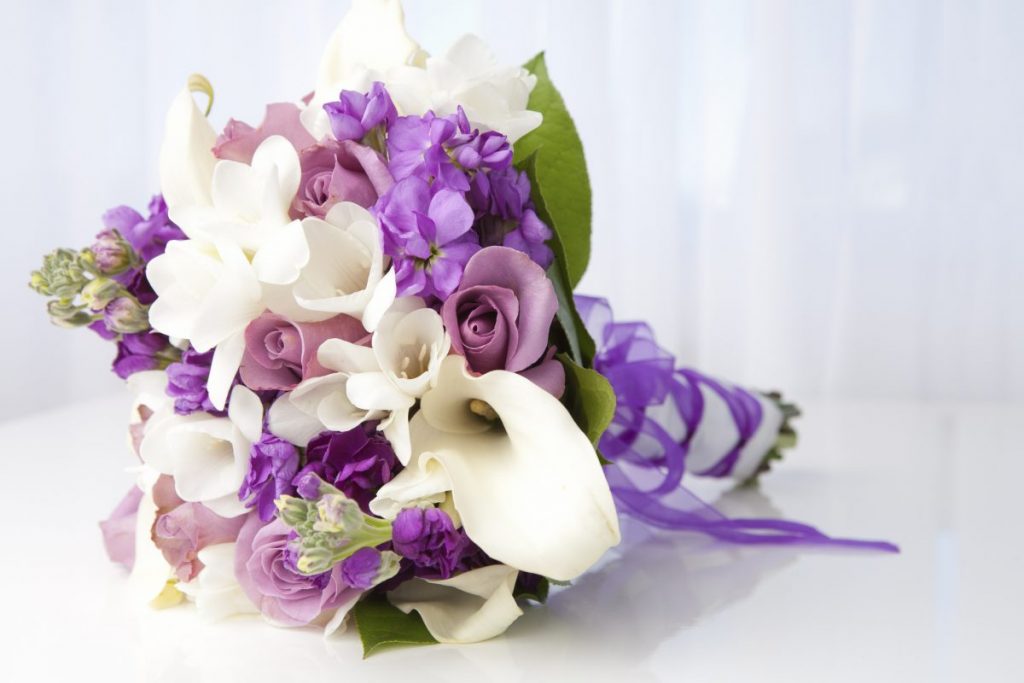 Greek history has it that calla lilies were born from the breast milk of the goddess Hera. The story goes that Zeus drugged his wife and snuck the baby, Hercules, to suckle at her breast. Hercules was his child born from the mortal, Alcmene. In drinking from the breast of Hera, the child would know divinity. But, Hera awakened and, in her shock, flung Hercules aside. In the process, milk gushed from her breast creating both the Milky Way and calla lilies. 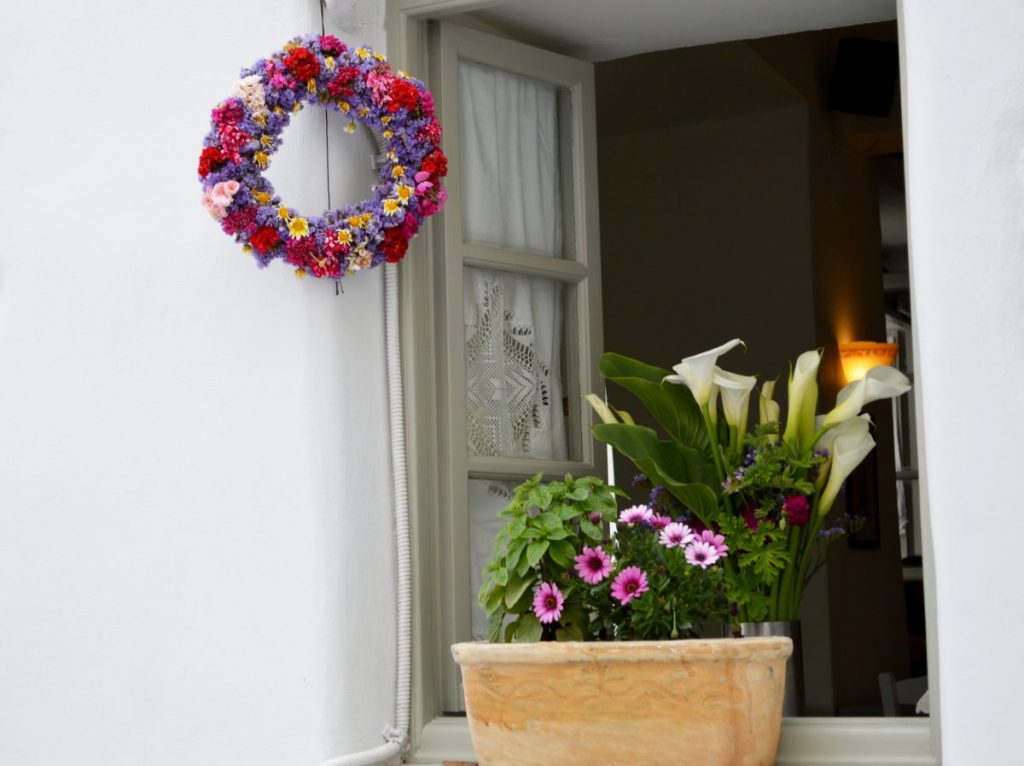 Calla lilies come in a variety of colors. White is a symbol of purity and innocence, while the pink calla is about showing appreciation and admiration. Purple is the symbol of passion, and yellow is gratitude. The orange ones symbolize confidence and pride, while black callas mean mystery and elegance. 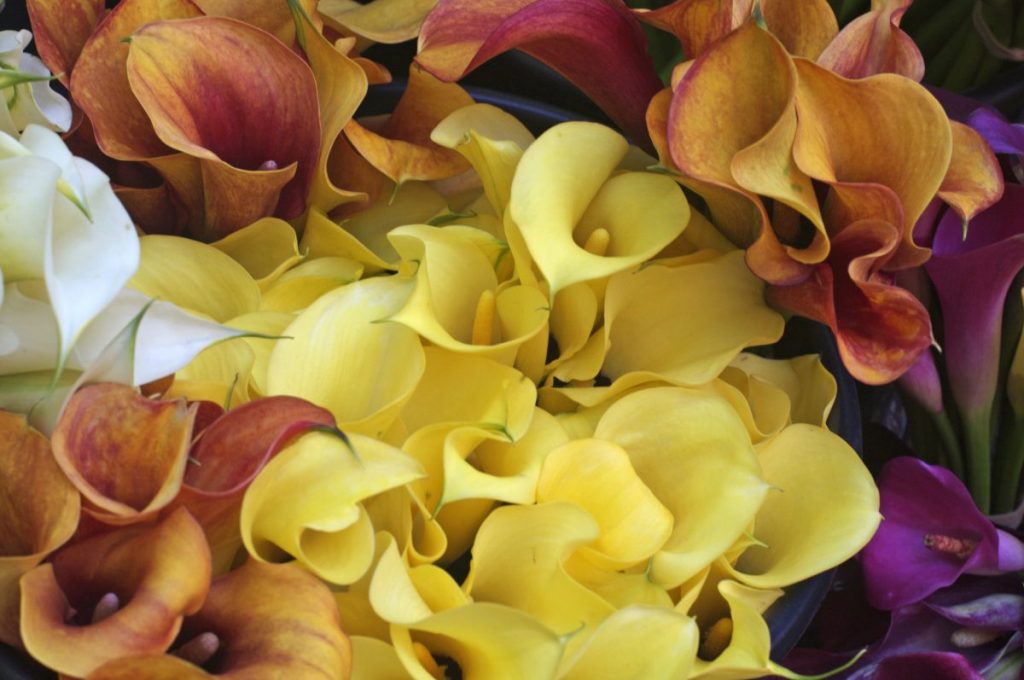 Despite their delicate look, the calla lily is hardy and easy to grow. When planting, find a spot that gives them full sun during the cooler times, and shade during the hotter months. They do well in warmer winter climates, but if it gets frosty, they need to be indoors. After the spring, frost is a good time to plant. Bulbs must be 12 inches apart and four inches deep, planted in soil with good drainage, so they don't rot. Under optimal conditions, they take about three to four months to flower and grow to between one and three feet high. 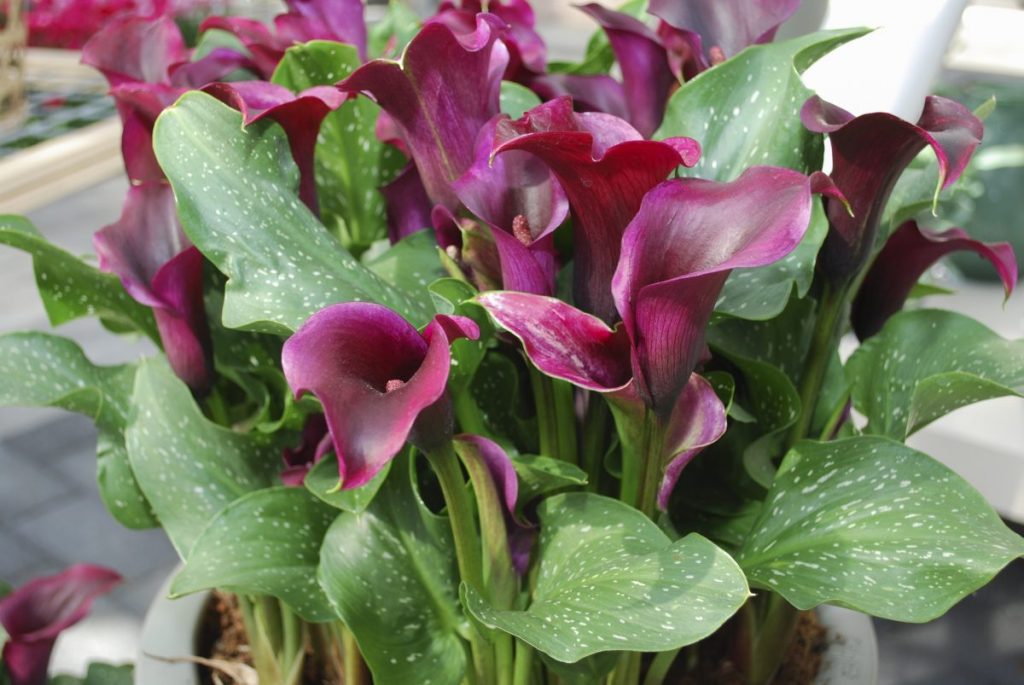 Callas have periods of growth and dormancy. Depending on the climate, their flowering period lasts from three to eight weeks, and it can be anytime between late spring and early fall. When dormant, hold off watering it as often, until you see it get back to the flowering phase. If you live in a wintry region, dig up the rhizomes before the first autumn frost. If you plan on replanting in spring, wash the rhizomes after digging, dry them for a few days, and keep them in a cool, dark place covered with damp peat moss. 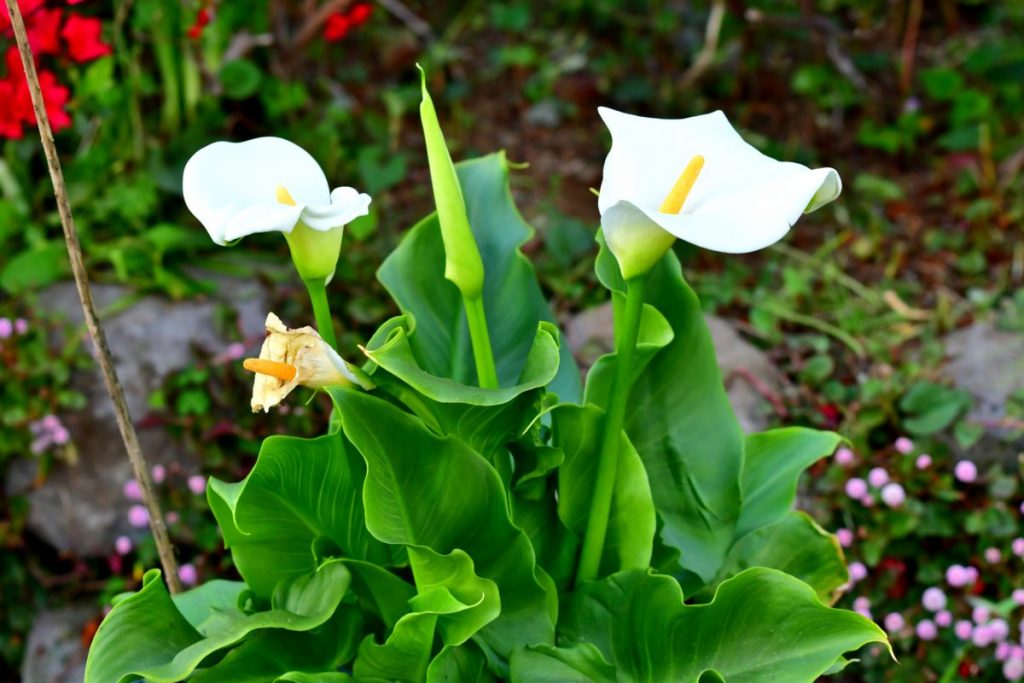 Your calla's leaves are yellowing, and it's stunted. The stalk is brown, and when you dig deeper, you see the rhizome is soft and watery. Erwinia carotovora is a type of bacterial soft rot that can lay dormant for years until there's the right mixture of warmth and moisture. E. carotovora spreads quickly in tropical climates, but there are a few tips to keep in mind. If possible, dip rhizomes in copper fungicide before planting. Make sure the soil drains well, and don't harvest wet plants or damaged rhizomes. Finally, avoid using a lot of nitrogenous fertilizer, as that encourages the Erwinia rot. 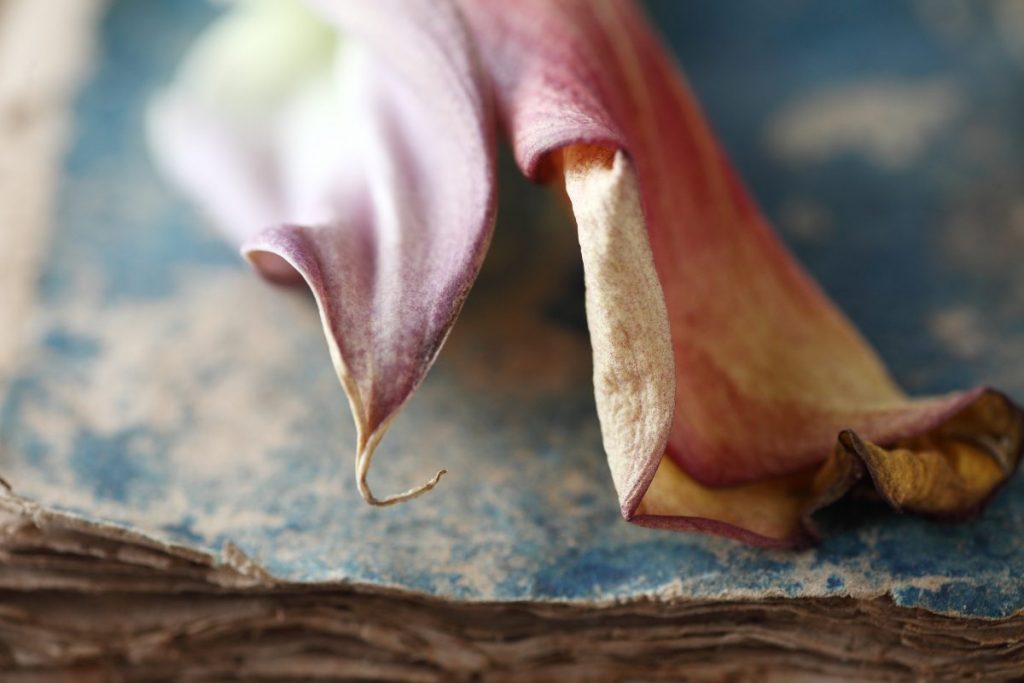 Calla lilies are toxic. Calcium oxalate comprises 80 percent of kidney stones, and it's also found naturally in a variety of foods, such as kiwi, rhubarb, and cinnamon. However, the arum family of plants, such as callas and philodendrons, has the substance in heavy concentrations. Ingesting any part of the raw plant induces nausea, vomiting, and swelling of the tongue, which can lead to suffocation. While pets may not eat the plant, they can accidentally ingest the pollen while grooming themselves. 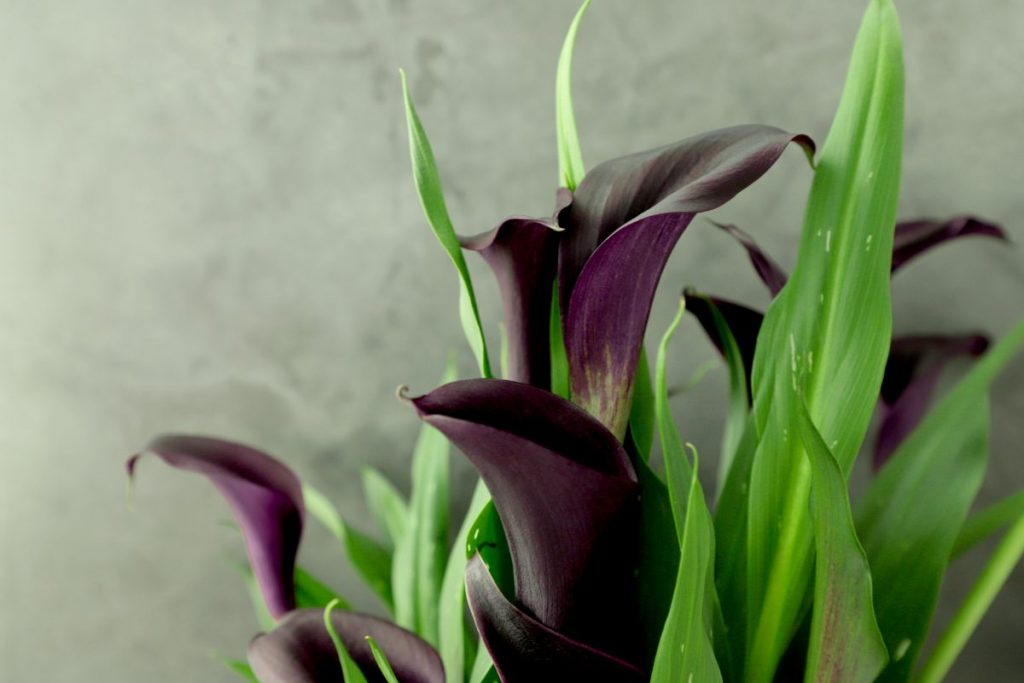 While it is a symbol of beauty, in certain countries, such as Australia and New Zealand, the governments have declared calla lilies as pests. The plant thrives near water, but authorities claim it is invasive and competes with more valuable crops. Because it has killed livestock and caused skin problems for residents, both countries have put residents on alert. Australia even has a special arum lily control hotline. 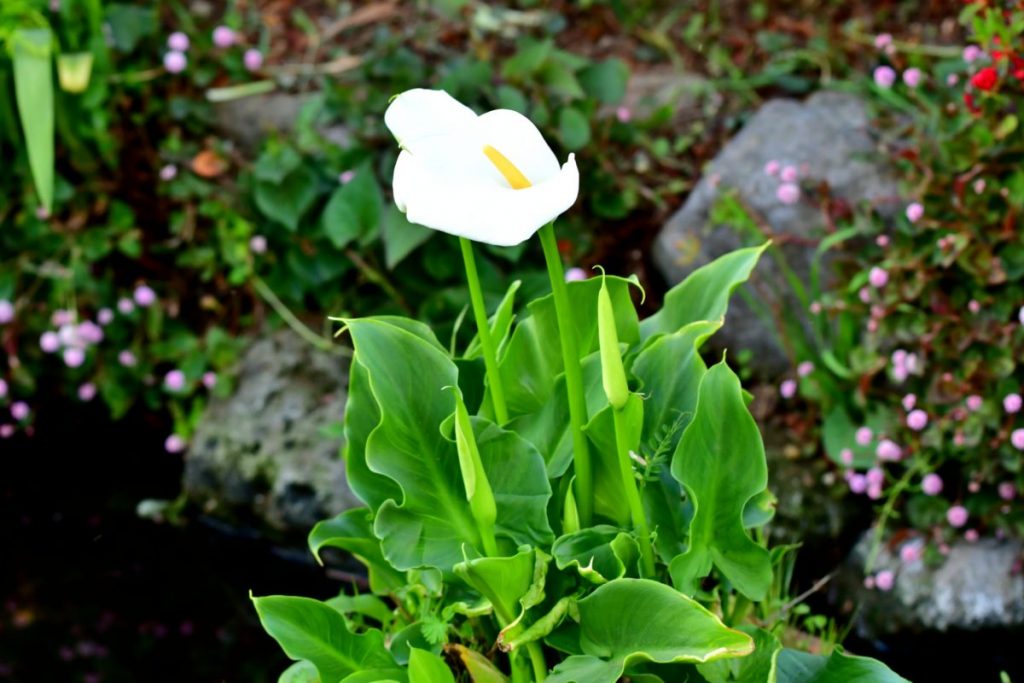 Because of the strict social codes during the Victorian era, flowers often had hidden significance. The way certain flowers were arranged conveyed a message that words never could. Due to the calla lily's resemblance to female genitalia, its meaning was more overt than others. Of course, Sigmund Freud brought this fact to the attention of his admirers and others in society. The flowers became even more mainstream when artists, such as Henri Matisse and Georgia O'Keefe, made it centerpieces of their paintings. 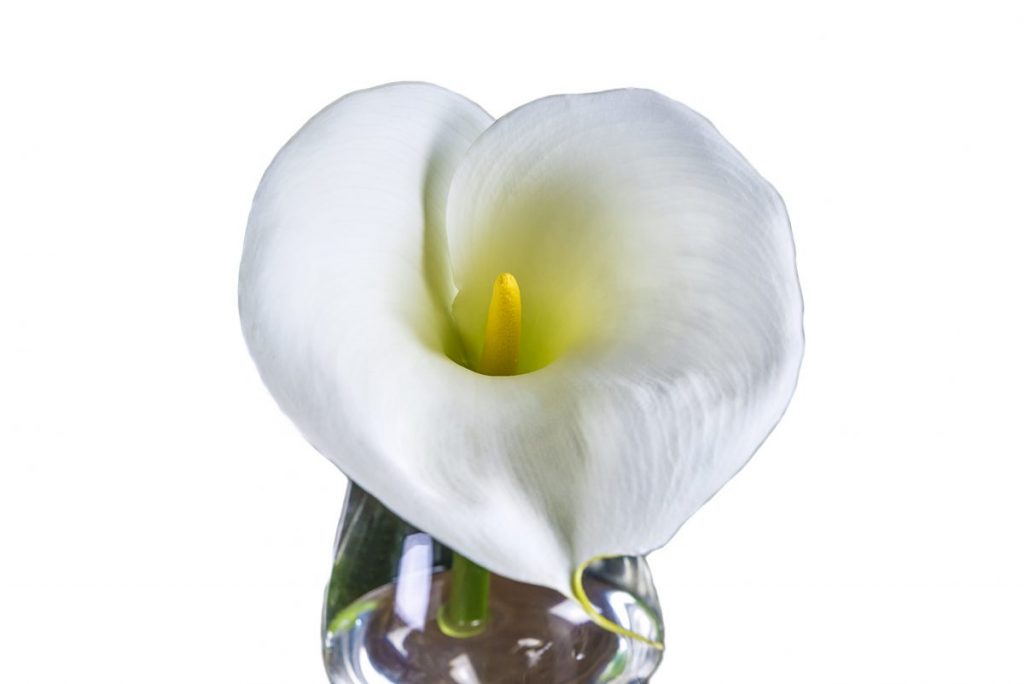