Why Do Dogs Roll In Grass, Dirt and Smelly Things?

There are few things more adorable than a happy puppy enthusiastically rolling around in the grass. However, this seemingly irrational behavior may have some important evolutionary and behavioral causes behind it that trace back to dogs' wolf ancestors. In other situations, it may be a sign that something is wrong and your dog needs help. The reasons dogs roll in the grass, and other substances are varied, but there are some common causes that most dogs experience at some time in their lives.

Although modern dogs tend to get their meals from a bag of kibble rather than hunting down prey, they still are a predatory species at heart. Some experts believe that rolling in grass, dirt and smelly substances is an instinctive behavior designed to mask their scent as they stalk prey. If the wind carries their scent to the prey animal, the strong smell of fresh grass or even foul-smelling things like feces may confuse the animal and allow the dog to get closer. 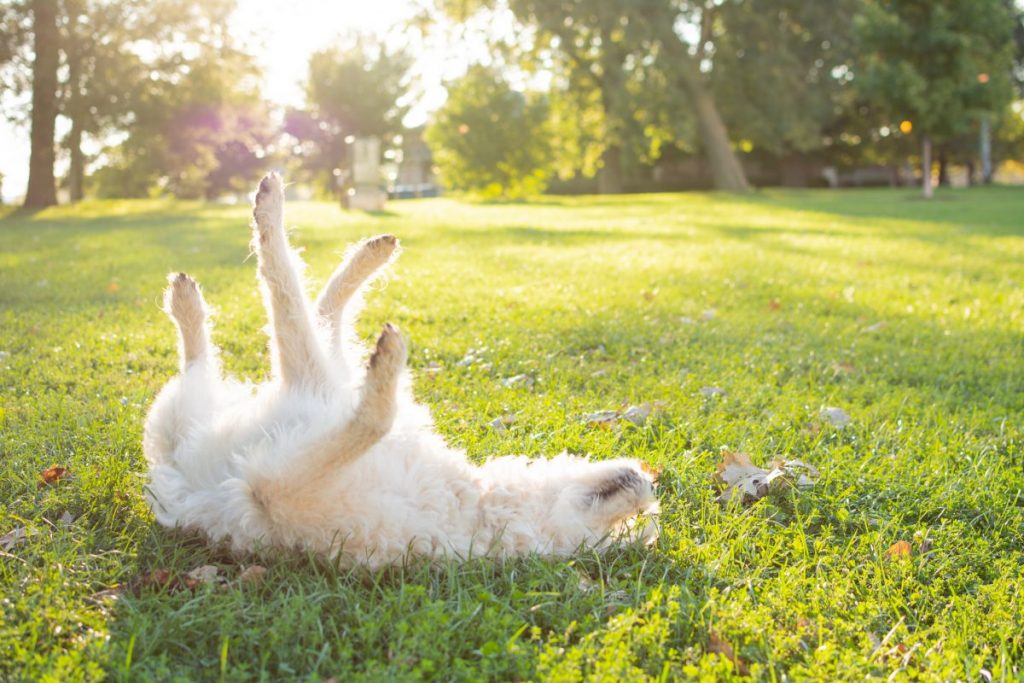 Providing Information To the Pack

Research into wolf behavior has suggested another possible instinctive reason. Some scientists noticed that wolves would roll in potential food sources or other interesting smells, such as a dead animal, and then go back to the pack. When the other members of the pack smelled the odor, they would sometimes track the scent back to the object themselves to investigate further. This acts as a way for a single wolf to communicate complex ideas to the other animals in the pack. 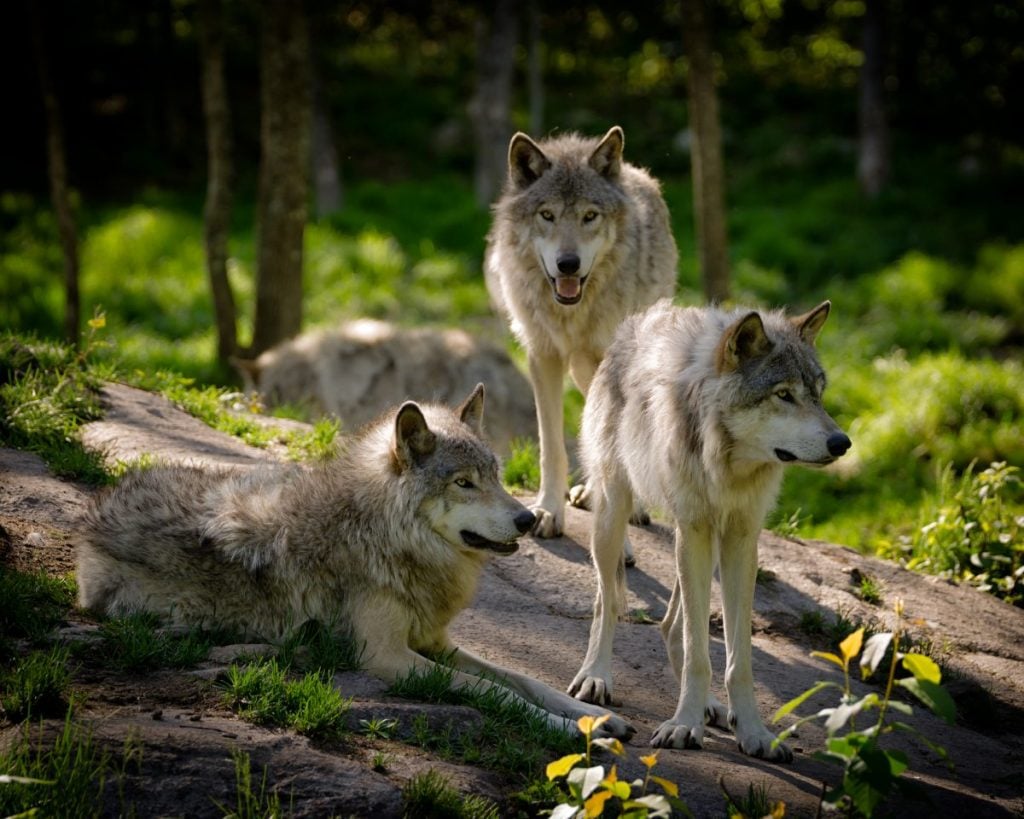 Sometimes it may be something as simple as an itchy spot that the dog can't quite scratch. While dogs are very flexible and can generally reach most of their body with their paws or teeth for a good scratch, there are some parts that may be harder than others, especially for puppies or breeds with short legs and stocky bodies. It also may simply feel good to have their back scratched, just like many people enjoy using back scratchers even when they're not particularly itchy. 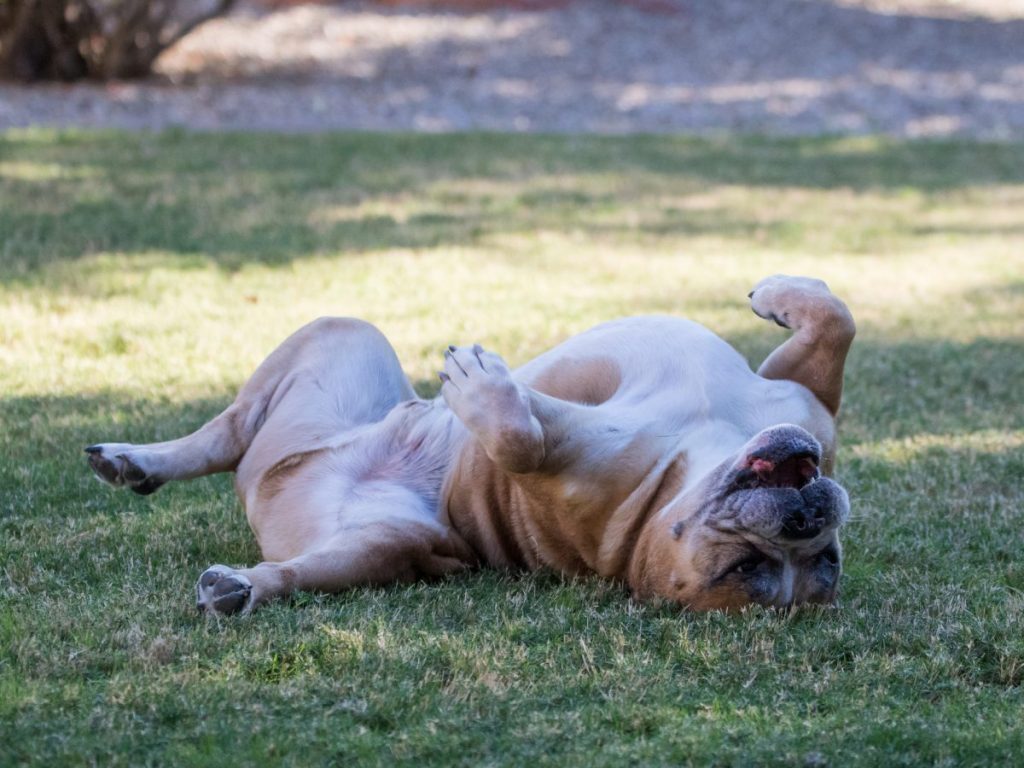 If a dog gets mud, bird poop, tree sap or another substance on its back by accident, it can't just hop in the shower like a person can. Rolling in grass or dirt can remove the foreign substance and help keep their coats clean and healthy. Dogs may also roll in grass to try to get scents they don't like off of them. This may be a reason that many dogs like to roll in the dirt after being bathed with scented shampoo. 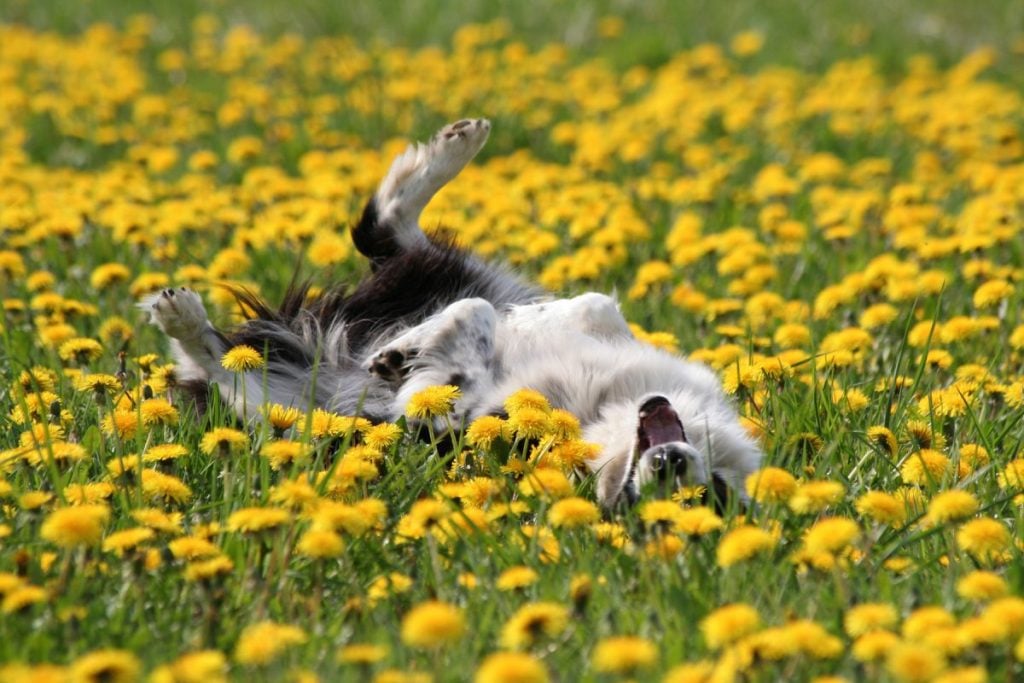 An Invitation To Play

Rolling is a goofy, fun activity, and it may act as an invitation for other dogs to come play. Dogs often wind up on their backs when play fighting, so getting into that position may help signal that they're in the mood for some wrestling. This is especially likely if the dog is making playful noises, holding a toy or watching other dogs while rolling around. 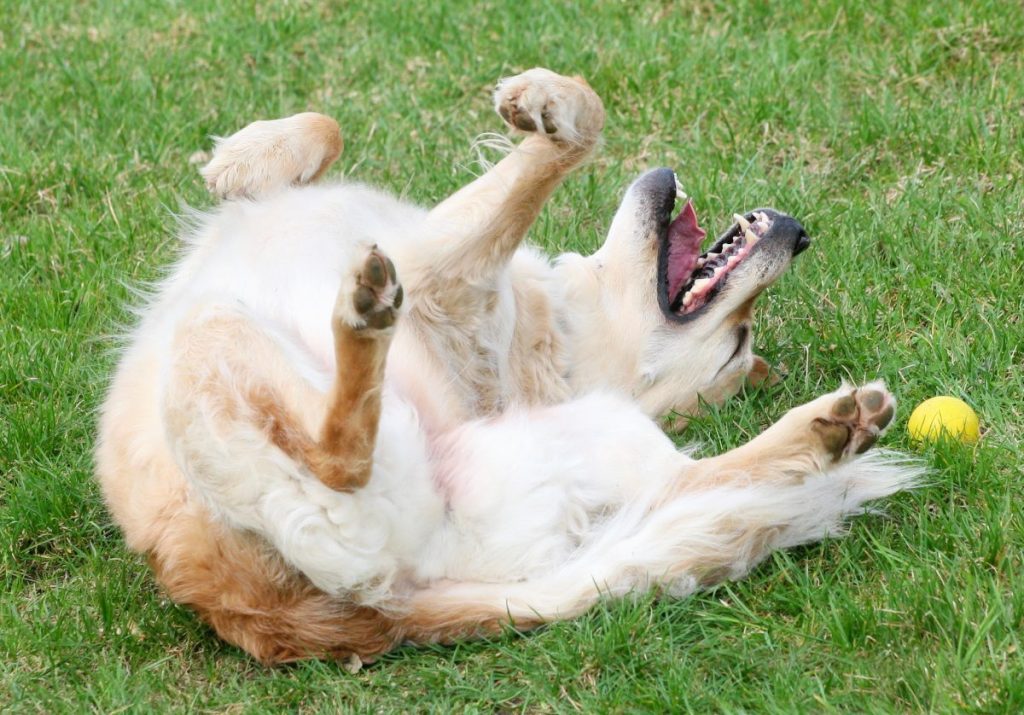 Sometimes, rolling may be a sign that something is wrong. It may be a signal that the dog has external parasites, such as fleas, or internal ones, such as roundworms or tapeworms, that are causing persistent itching. Some skin conditions, such as allergies or dry skin, may also cause excessive itchiness that the dog tries to solve by rolling. If your dog seems to be rolling unusually often or seems distressed while doing it, talk to your veterinarian about possible causes. 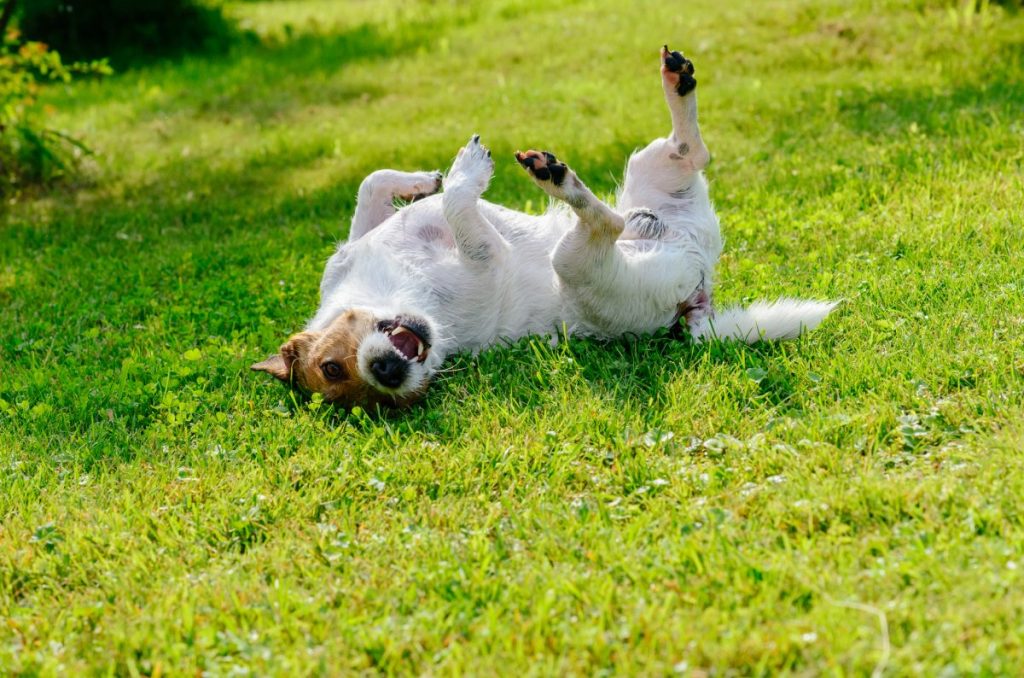 Dogs can also develop behavioral health issues, and obsessive rolling may be a symptom. Sometimes anxious or extremely bored dogs may develop self-soothing behaviors, and rolling can be one of them. If your dog is simply bored, you may just need to make sure your dog gets more exercise and playtime to fix the problem. More deeply rooted anxiety may be helped by working with a behaviorist. This kind of rolling is often accompanied by destructive chewing, excessive barking, and other undesirable behaviors. 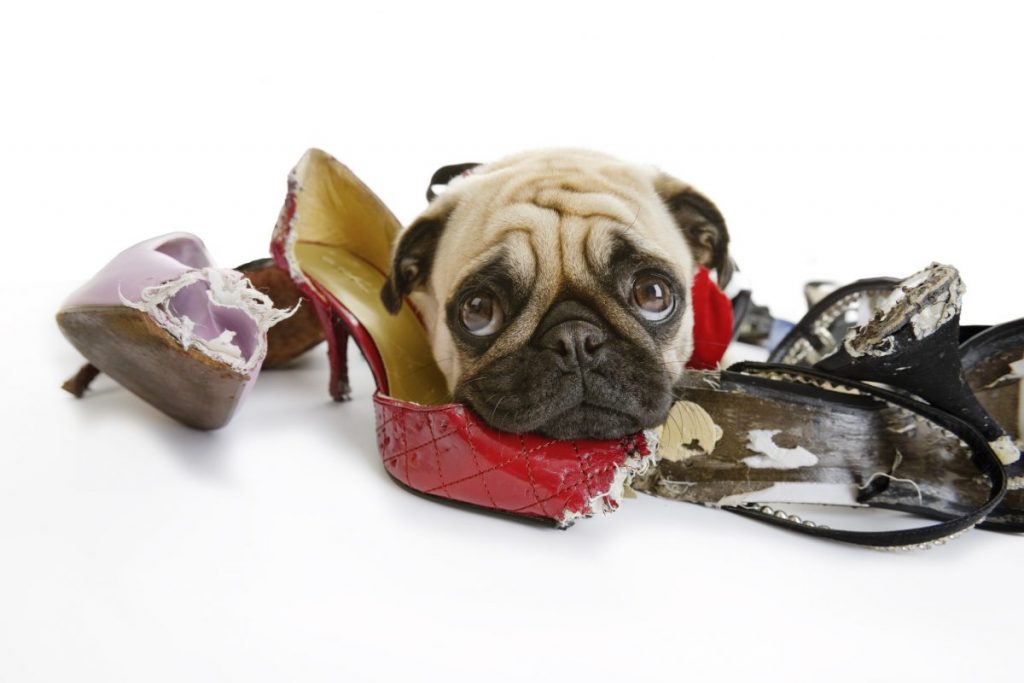 In most cases, rolling isn't harmful at all. Aside from medical causes or anxiety, dogs typically roll for benign reasons. Even rolling in foul-smelling things like feces or roadkill is usually safe for your dog, though you should probably give him a bath before hugging him or letting him in the house. Be careful not to let your dog roll in grass that has been freshly treated with pesticides or certain other substances, however, as some can be absorbed by the skin and are toxic to dogs. 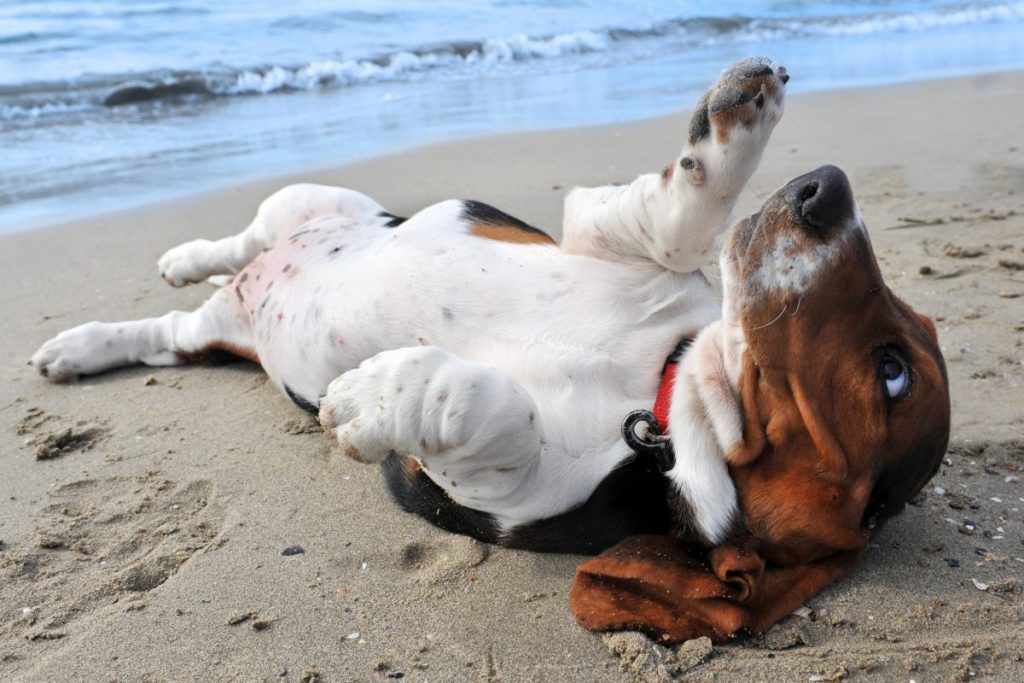 How To Prevent It

If your dog is overly fond of rolling in the grass or has a penchant for rolling in stinky things, you may want to train away the behavior. Since it is an instinctive and self-rewarding behavior, this can be difficult to do. The best way to do it is to simply watch your dog carefully whenever he is around things that he might want to roll in, and call him away or distract him every time he starts to roll. Giving your dog other things to focus on, such as playing fetch or obeying obedience commands, can also help. 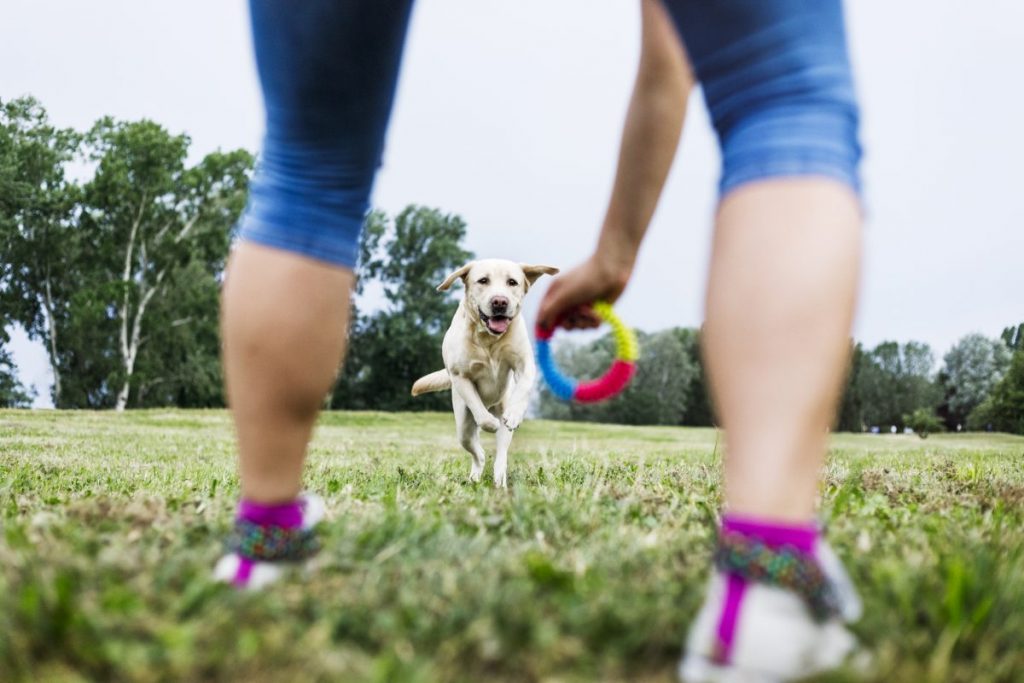 What To Do If Your Dog Rolls In Something Smelly

Despite your best efforts, there's a good chance your dog will roll in something smelly at some point. If that happens, the best option is to get your dog home and bathe him as soon as possible. Never use shampoo designed for adult humans on dogs, although gentle, unscented baby formulas are generally safe. Specially formulated canine shampoos are even better, and they even make some designed to neutralize foul odors.

If you think your dog might have rolled in grass that was recently treated with pesticides or herbicides, contact your veterinarian or a veterinary poison control center for advice. 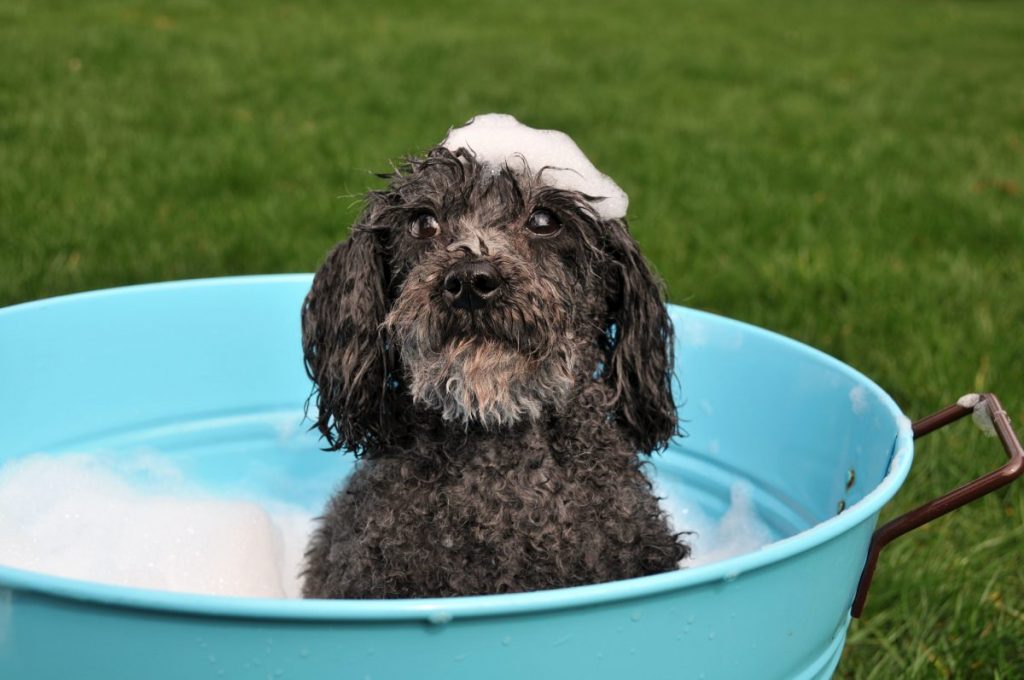