Few things are as cute as the sight of a kitten or even an adult cat hiding in a box peering out at the world with huge round eyes. But for all its universal and heart-melting cuteness, just why do cats like boxes? It doesn't matter what toys and treats are bought for the little feline, the thing a cat seems to like more than anything else is simply to get inside the cardboard box it came in. So just why do cats love to get into a cardboard box?

Perhaps not surprisingly, a box gives a cat a feeling of comfort and safety. Most of us do things habitually that make us feel secure, and that gives us comfort in some way, and of course, our feline friends aren't incredibly different in this basic need.

Importantly, a box encloses the cat so nothing can creep up from behind. Any animal looking to pick a fight must approach from the front thus placing itself directly in the cat's line of sight giving the cat it a distinct advantage. 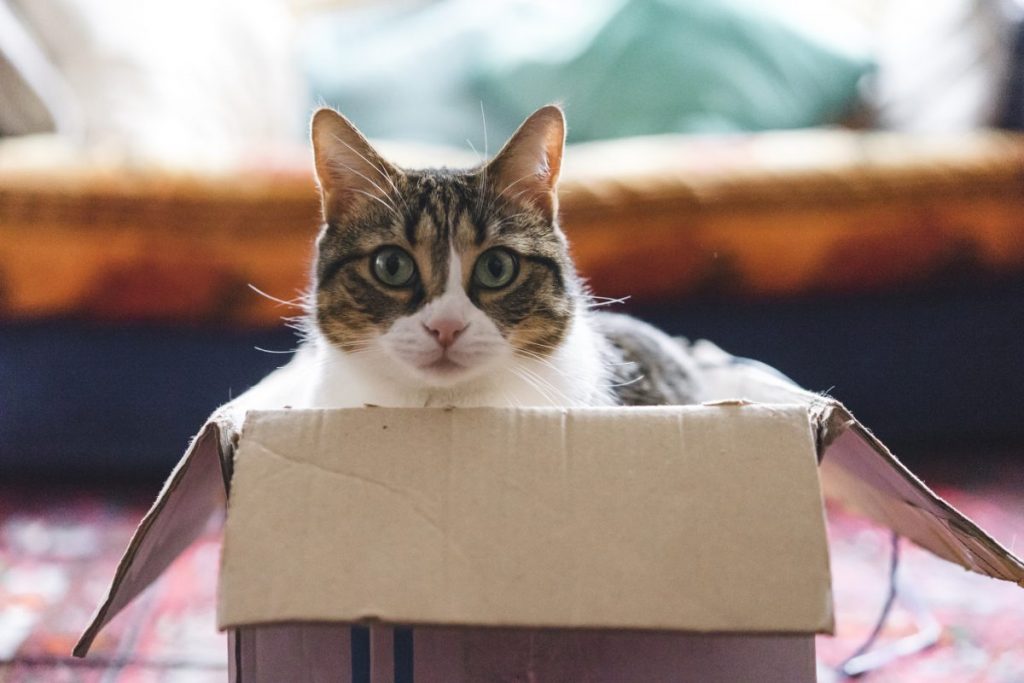 Looking at the world from the vantage point of a cozy cardboard box also gives the cat the ability to quickly jump out and attack anything passing by that takes its fancy.

While being in a box protects the cat from being crept up upon from behind, it allows the cat to do that very same thing to its prey. Of course, it will do the same for a windup mouse much to the amusement of many a cat owner. 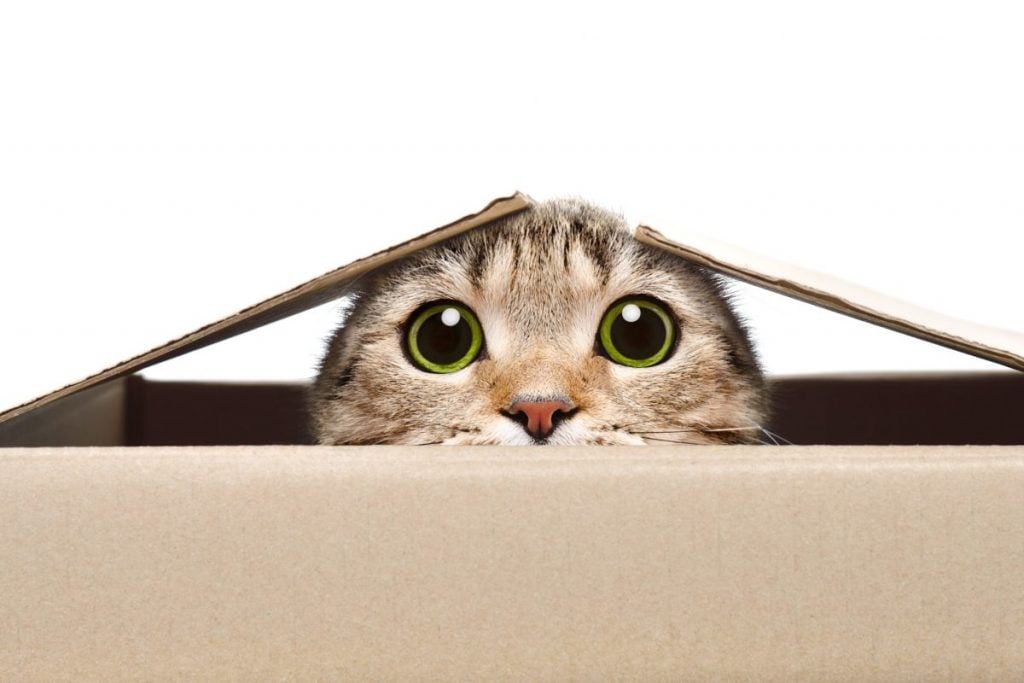 If there's one thing cats are famous for besides being incredibly cute, it is their fondness for sleep. They are quite happy to sleep up to 20 hours a day. With such a schedule, it's important to have a safe and cozy place to do it in. The enclosed space of a box and the secure sensation they feel inside makes for the perfect place to snooze. 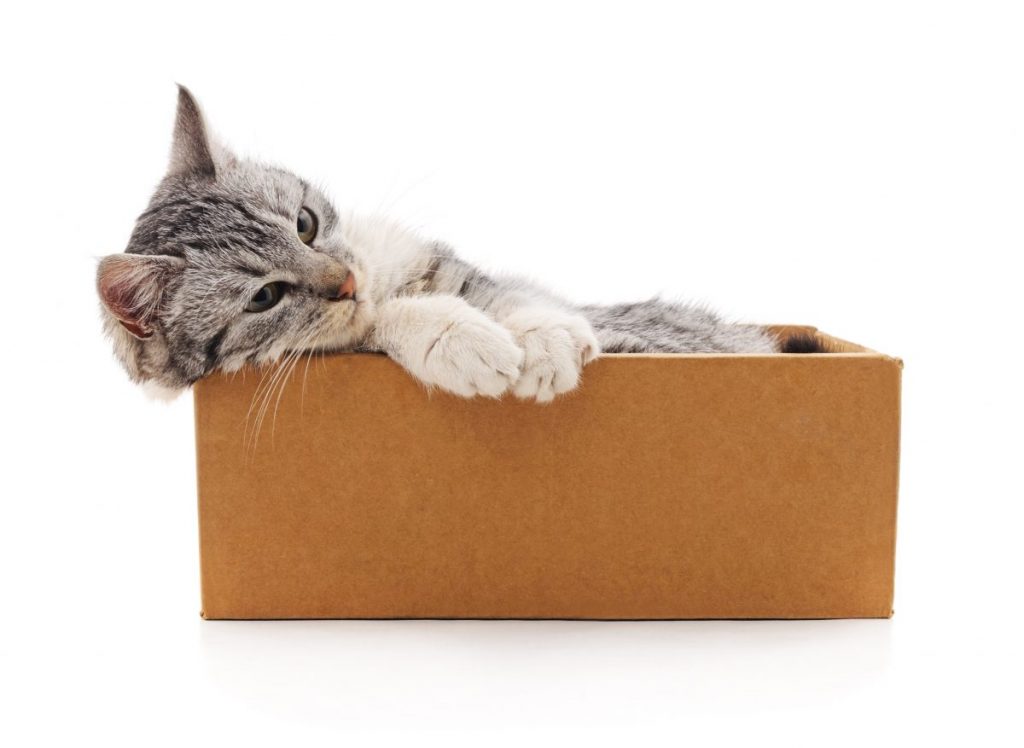 Cats would rather avoid conflict and stress than attract it still less actively seek it out. A box is a simple and straightforward remedy. In the sheltered environment of a box, big or small, a cat can feel shielded from any lurking threats. According to experts, since cats are solitary creatures, they aren't very gifted when it comes to resolving conflict and so would rather avoid it. The protective walls of a box are the ideal solution.

All this has a scientific basis as the journal Applied Animal Behaviour Science reported in an interesting case study. A group of cats who had been brought into a shelter were randomly selected and given their very own box while others weren't so lucky. The researchers discovered that the cats that had received a box coped a lot better adjusting to their new environment than their box deprived counterparts. 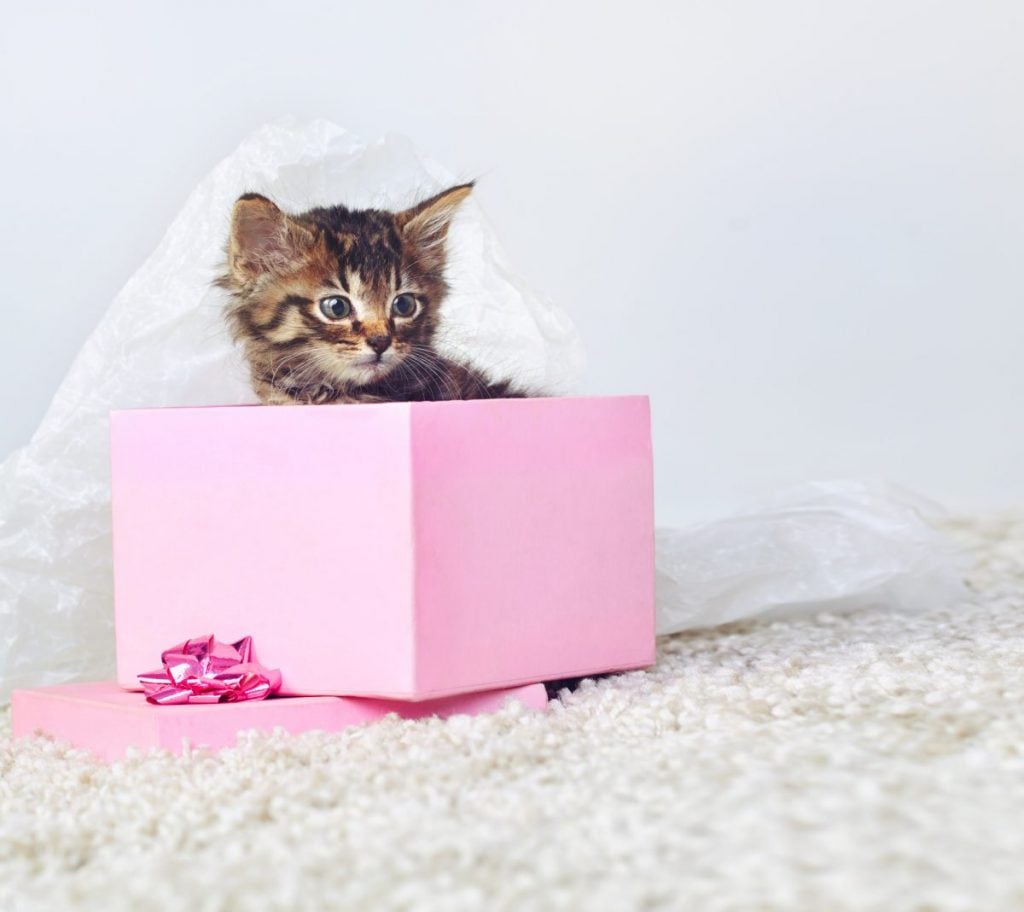 Another simple reason why cats can't get enough of boxes is simply a matter of temperature. Normally a cat's body temperature will fall between 100.5 to 102.5 degrees, higher than that of humans which means they are comfortable in a higher ambient temperature than their human friends.

Whereas people tend to keep their homes somewhere close to 72 degrees, cats prefer and ambient temperature somewhere between 86 and 97 degrees. A box provides the perfect insulation. 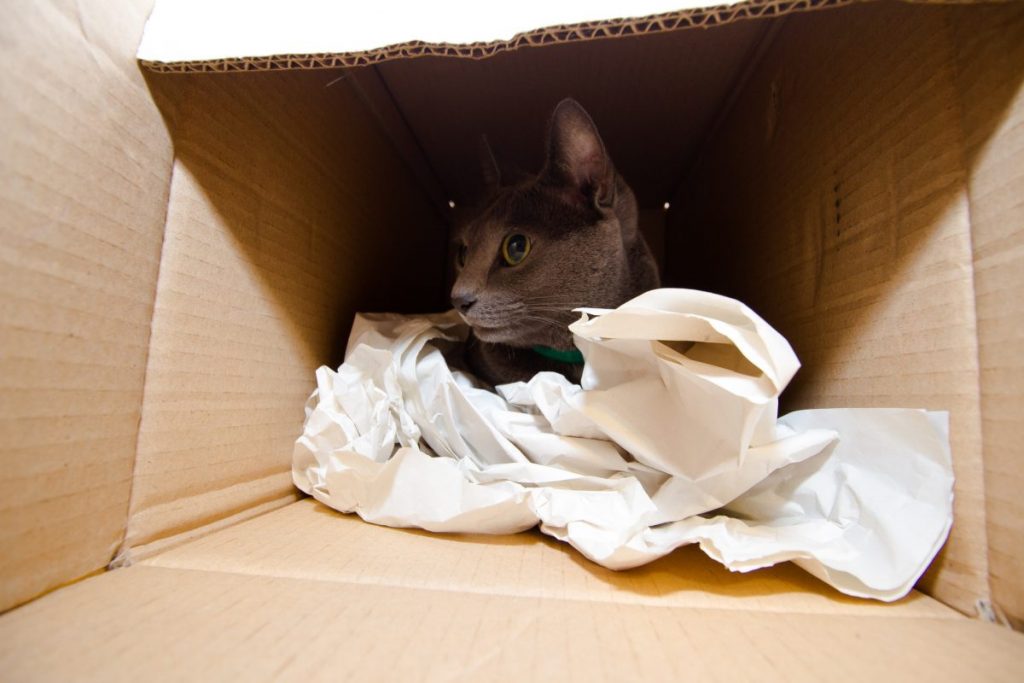 According to experts, the best place to position your cat's box is, so it's facing the wall a few feet away. Put a few treats inside for that added measure of security.

If your cat doesn't cope too well with new situations or might feel saddened by your absence, leave an item of your clothing such as a t-shirt or something with your scent on to give a sense of familiarity and security to your feline friend. 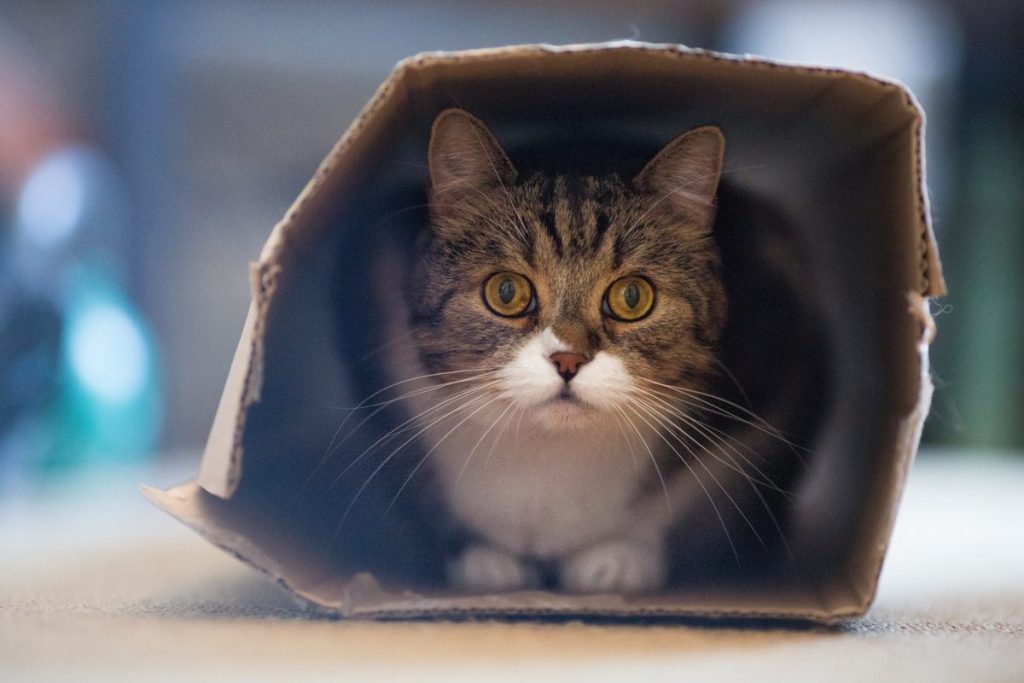 Just as a cautionary note, make sure any box you donate to your cat is safe. That means checking for things like protruding staples and anything a cat might cut and injure itself on.

Additionally, make sure there's nothing in there it could choke on like packing foam or bits of string. Putting a towel down on the floor of the box will offer an extra feeling of security and comfort that your cat will love. 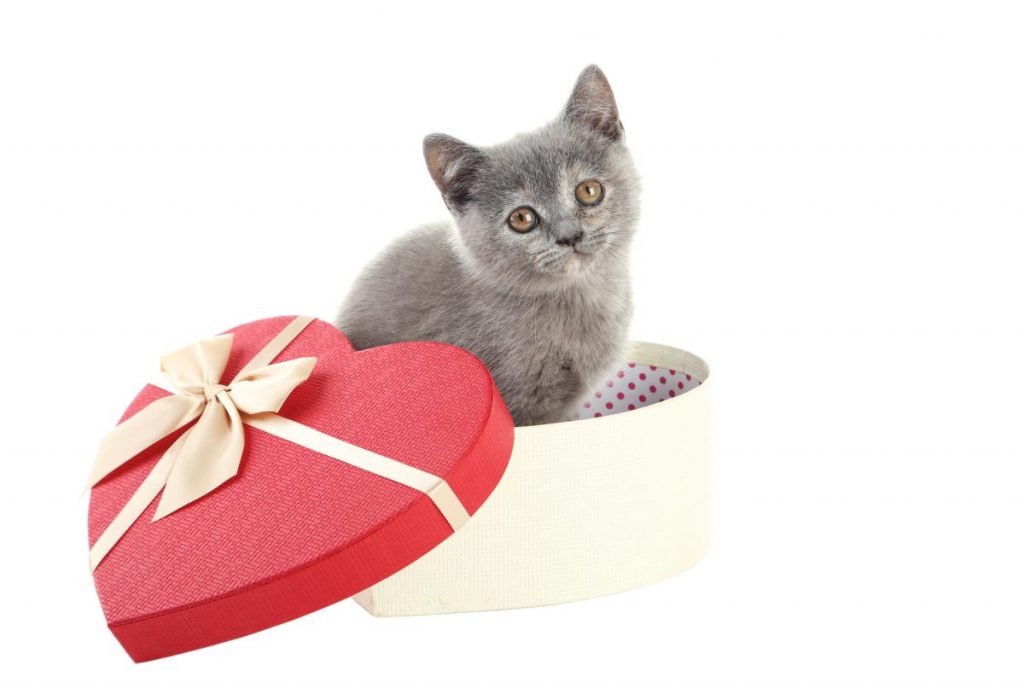 Some experts in all things feline have even suggested that getting into a cardboard box reminds the cat at some level of the security it experienced in the womb.

Possibly such a small and enclosed space reminds them of the days when they would cozy up to mother and their fellow newborns. A box takes them back to their kitten days when they felt secure and safe in the world. We humans often do the same thing looking for ways to take us back to times when we felt most secure. 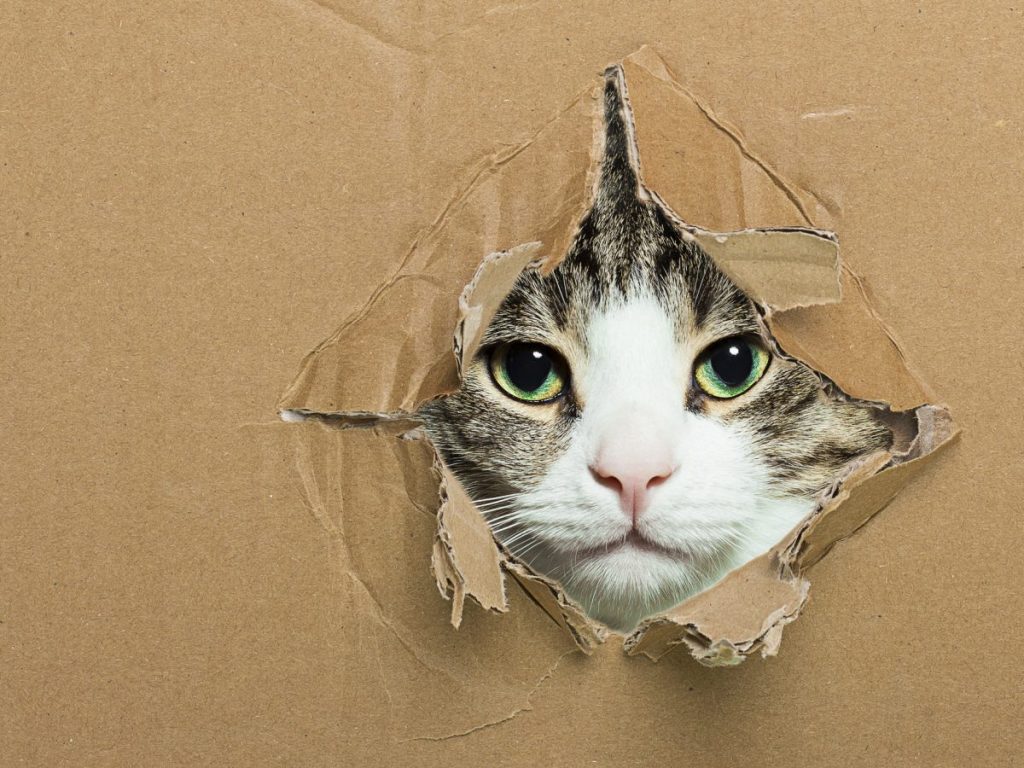 While cats undeniably love the security of a simple cardboard box, it still needs to feel in control and to be able to look out on the world from its cozy and secure position. So avoid closing the top of the box on top of your cat! While it might seem amusing to do so, feeling totally enclosed will increase stress and induce panic. Let your feline friend enjoy the pleasures of a simple cardboard box on its own terms. 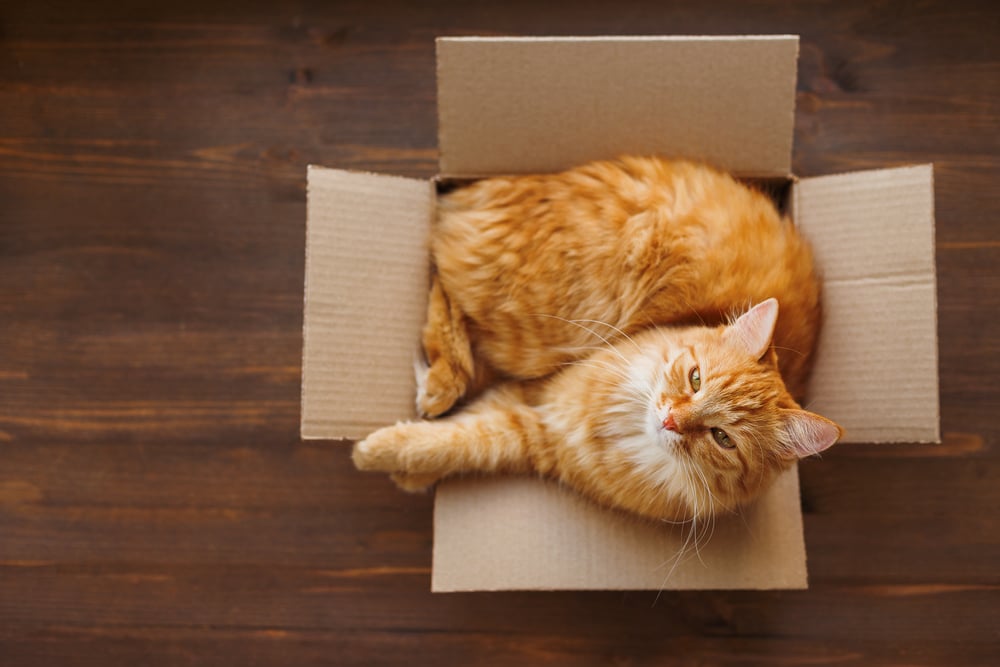