Why Cats Sleep So Much

Cats sleep for most of the day. People lucky enough to have a cat in their family often find them curled up in a warm spot having a snooze. On average cats sleep between 12 and 16 hours every day, which are broken into short cat naps. Are cats the laziest animal around? Cats have a different evolutionary history to humans, so they have their own requirements for rest and recovery. By understanding pet cats we can see that they are not lazy at all.

How Much Do Cats Sleep?

Compared to humans, cats do sleep far more than people do. Most experts recommend that humans sleep for 8 hours for the most beneficial effects. However, cats can sleep for up to 21 hours a day; that’s almost 88% of the time. There is natural variation between individuals, but even the most wakeful cat will sleep for over 12 hours in every 24 which is half of the time. 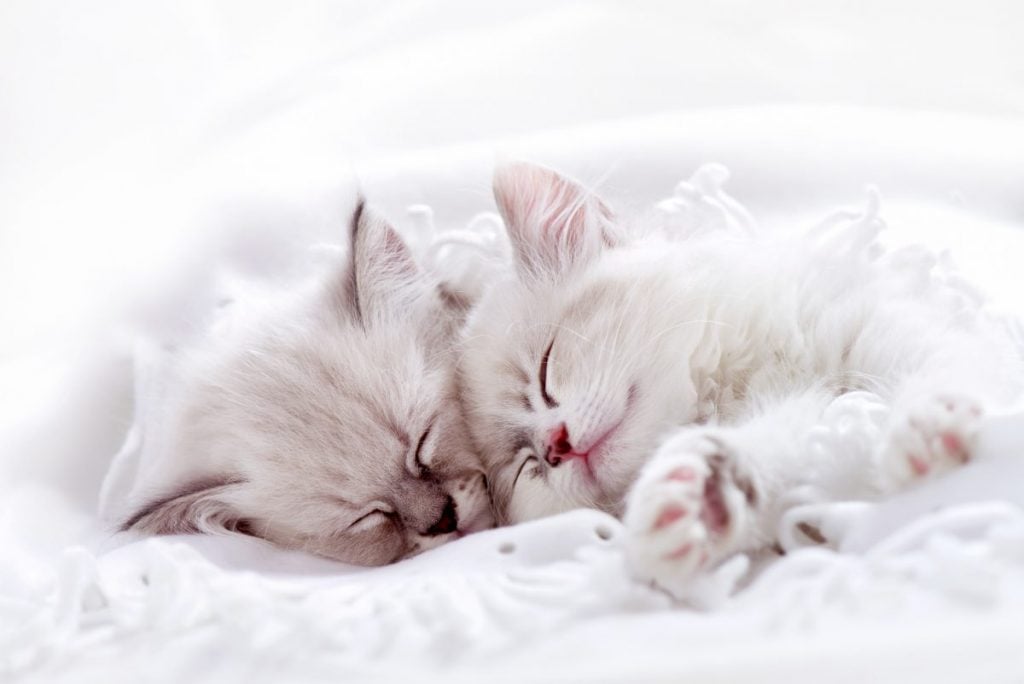 Changes Throughout a Cat's Lifecycle

Kittens are younger and often more playful than adult cats, and they have periods of intense energy. All mammals are the same because the metabolism of young animals being faster than that of the older animals. Although kittens have higher energy, they will also sleep more to rest their growing bodies. Geriatric cats are those over seven years old, and they sleep more than adult cats between the ages of 1 and seven years. As with humans, metabolism in older cats slows down meaning they feel more lethargic and sleepy. Many older cats spend over 70% or more of their time asleep. 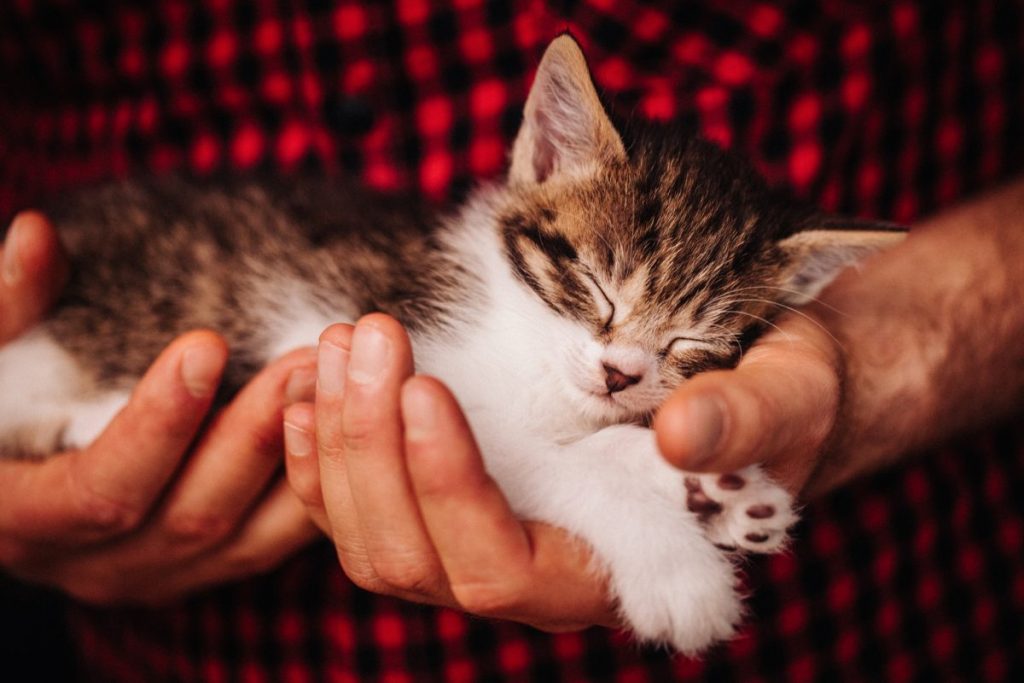 Domestic cats are a member of the feline family which includes large animals like tigers and smaller African wild cats. All felines have similar evolutionary histories. Cats are hunters and need meat to survive. Although in our homes we can give pet cats all the food they want, their evolutionary history still expects them to survive in the wild as they did for millions of years. Therefore to understand the behavior of a pet cat, you need to know the conditions they evolved to survive and thrive. 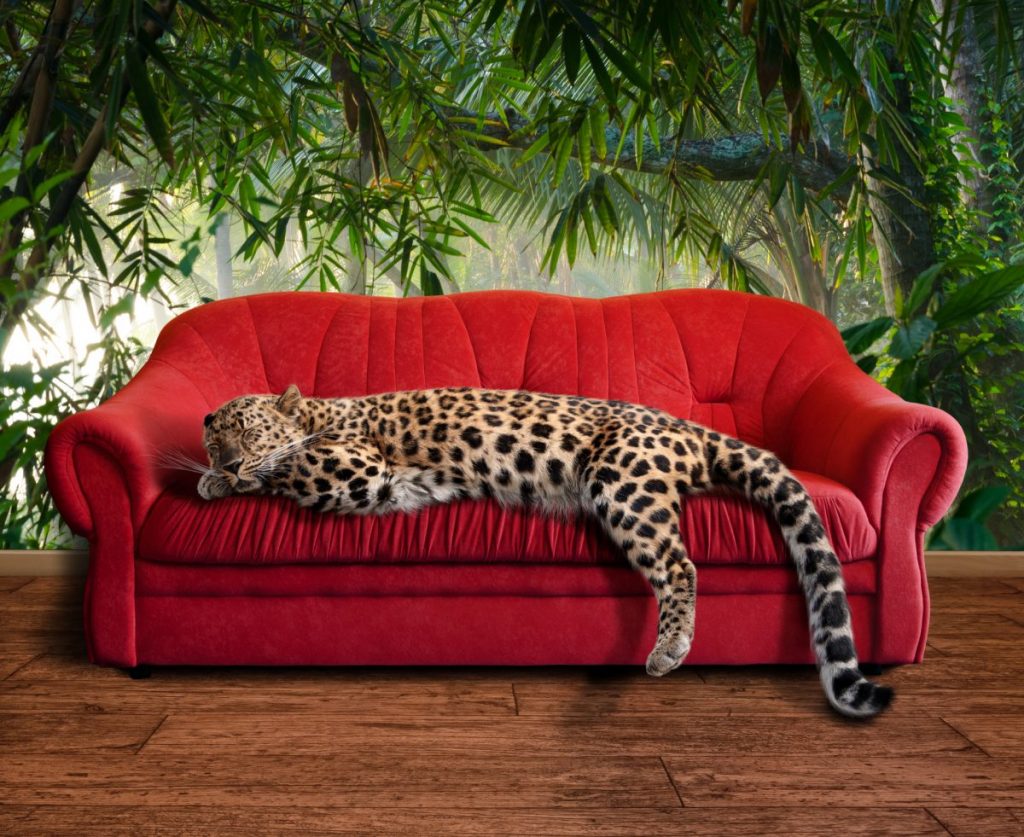 Domestic cats evolved to have a crepuscular lifestyle. That means they have the most energy during twilight which is dawn and dusk. At these times, cats have an advantage when hunting small prey to eat. During full daylight and darkness, cats evolved to stay hidden. In daylight or darkness, cats find it more difficult to catch prey, but also they may be hunted. Cats are small carnivores, and in the wild, they were hunted by larger carnivores. It was safer to lay low and sleep during these times. 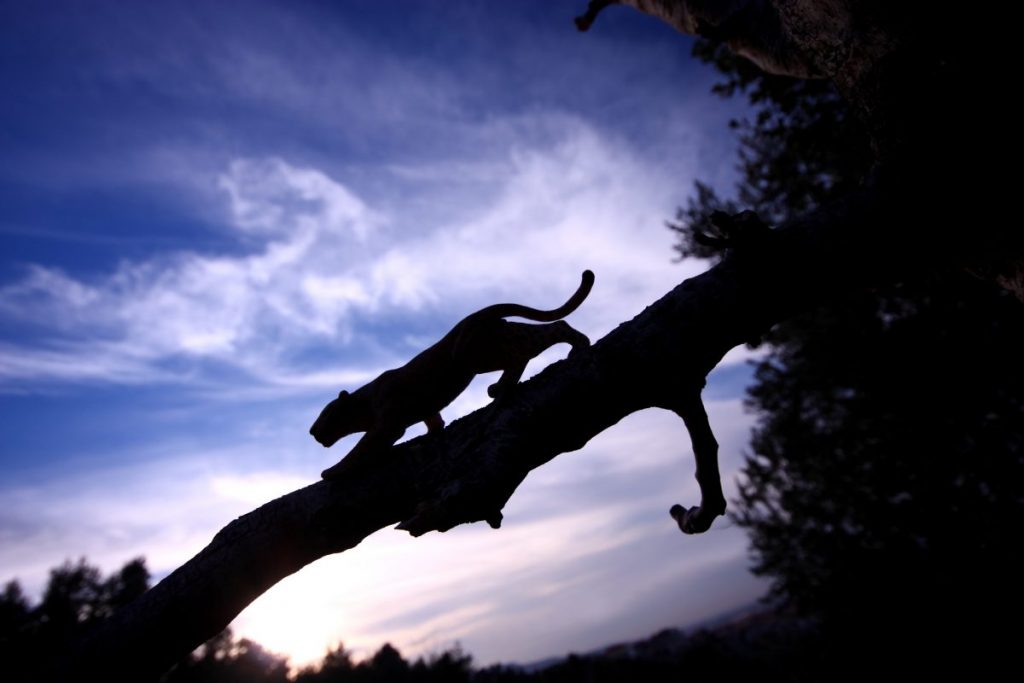 Because cats are crepuscular their window of time to be active is quite small. That means they focus on saving their energy for a brief period of intense hunting. After they have caught their prey and eaten it, they find a safe place to sleep and digest their food. Just like humans, after a satisfying meal cats feel sleepy. For people with pet cats, this pattern of behavior to hunt prey, catch it, eat it and then sleep is the ideal sequence to follow with their own cats. Playing with a cat toy should be followed up by a meal or a treat, and the cat will want to sleep afterward. 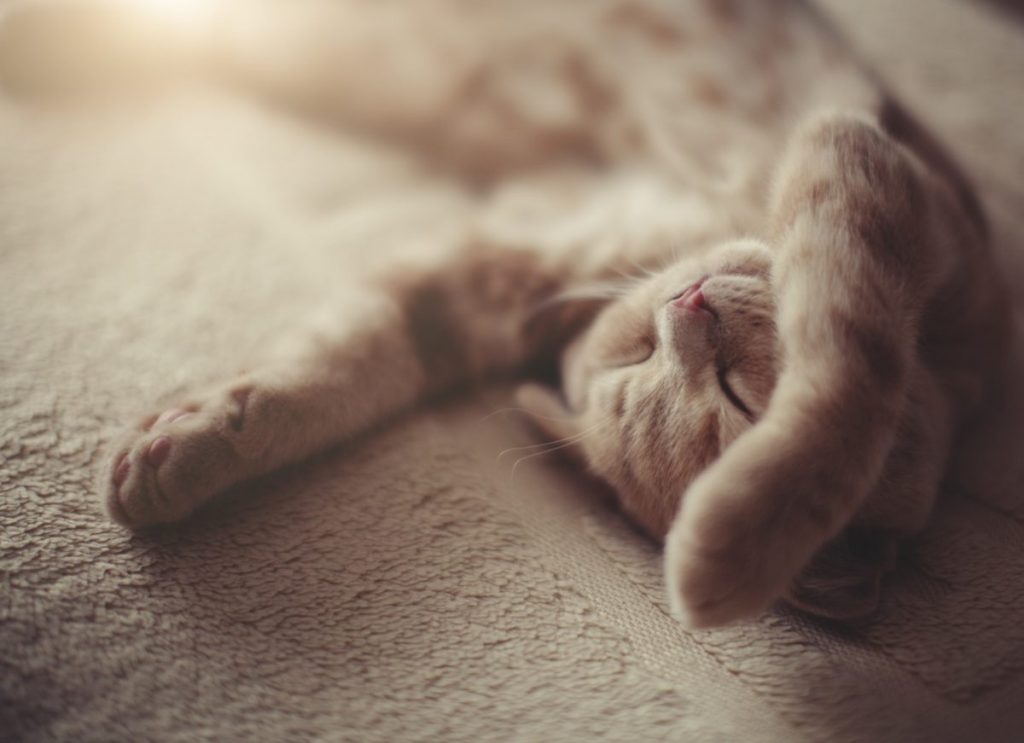 Just because a cat is curled up with their eyes closed, it does not mean they are asleep. If you call their name or shake a bag of treats, their ears will prick up, or an eye might open to watch you. Little research has been conducted on the exact percentages, but although a cat may seem to sleep for 16 hours in every 24, they may only be resting. The reason cats will relax rather than prowl about or play goes back to their evolutionary history. In their minds, it is safer for them to stay still during daylight hours in case a larger predator is hunting them. 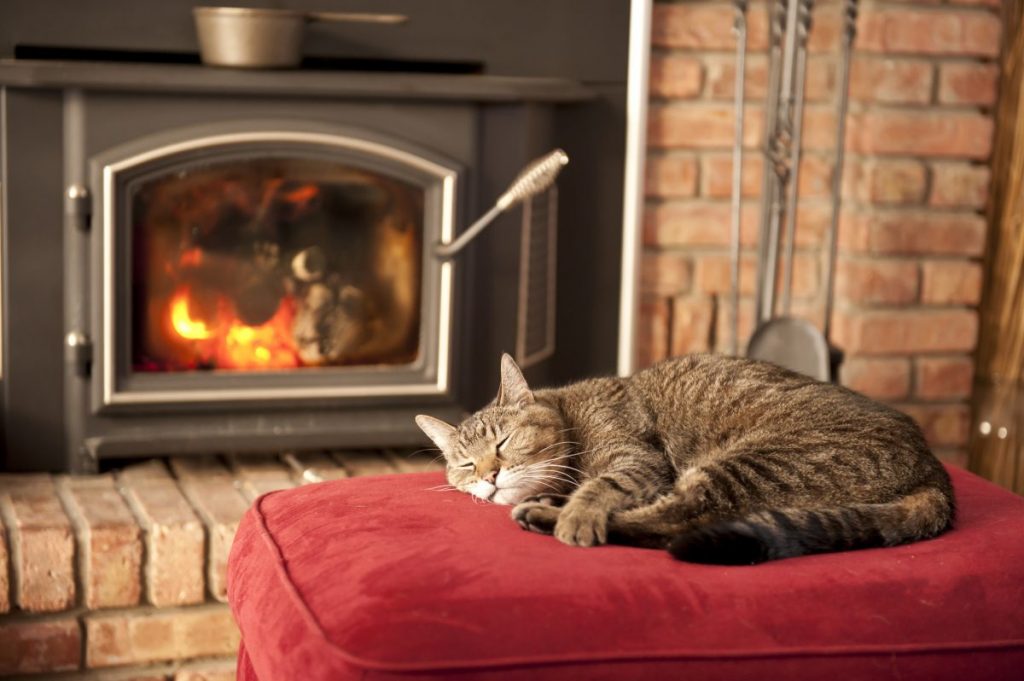 Lay a pile of clean and folded laundry on the bed, and your cat will soon be asleep on top of it. Buy a fancy new cat bed, and kitty is likely to prefer the box it came in. Why? This behavior is because it is not because cats want to annoy you; they are looking for a place where they feel safe to sleep.

That explains why they rest on the clothes – its higher than the surrounding bed and may be warm from the dryer. 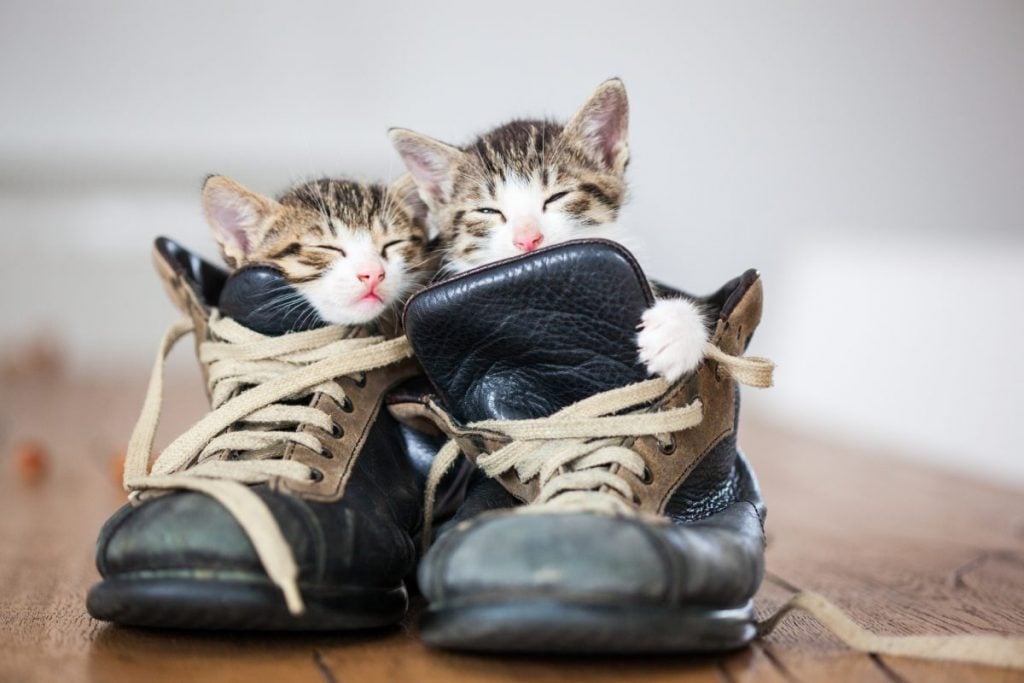 Not much scientific research has been conducted into the dreams of animals, including cats. Anecdotally, owners see their pets twitching and making noises while asleep which looks very much like dreams. The consensus is that cats do dream. What they are dreaming about may be a mystery, but the purpose of dreams is likely to be similar to our own – we dream to make sense of our experiences. Perhaps cats dream about hunting techniques or even playing games with their owners. 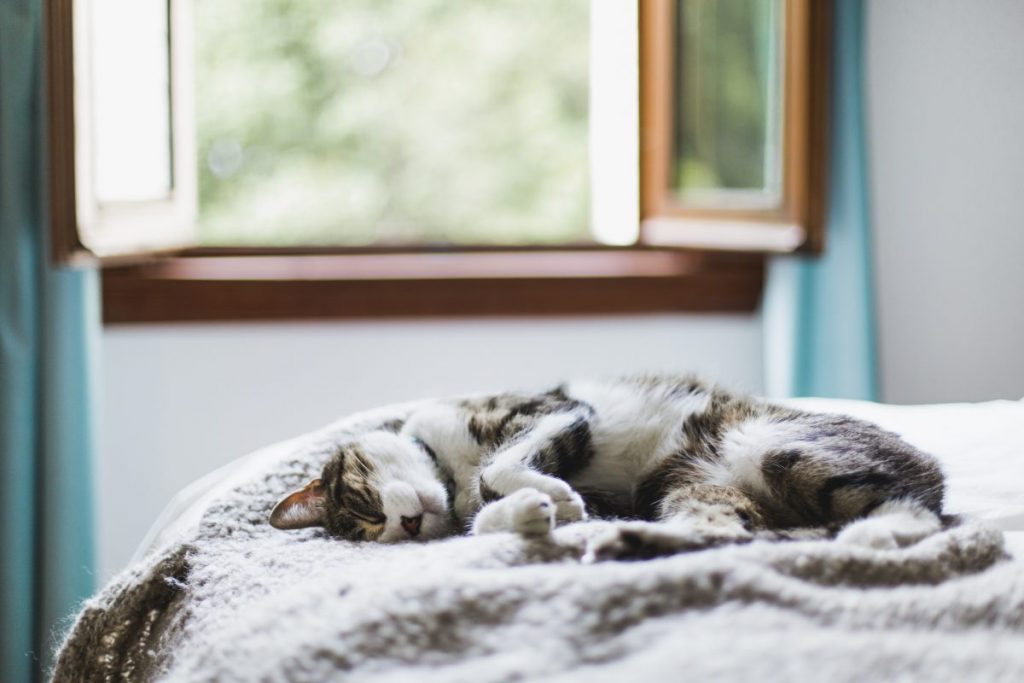 Waking Up A Cat

Most of the time if you enter a room where a cat seems to be sleeping they will wake up enough to open their eyes and watch you. If you need to move them to take them to a vet or because they are sleeping on something you need, then it is safe to touch a cat with open eyes. However, it is not recommended to try and pick up an entirely unconscious cat. When surprised or startled, a cat will feel threatened, and a usually friendly cat may claw or bite. This isn’t surprising, imagine how you would feel to be woken up suddenly. If you need to move a sleeping cat, smooth them gently until their eyes open then slowly scoop them and place them somewhere, they can carry on napping. 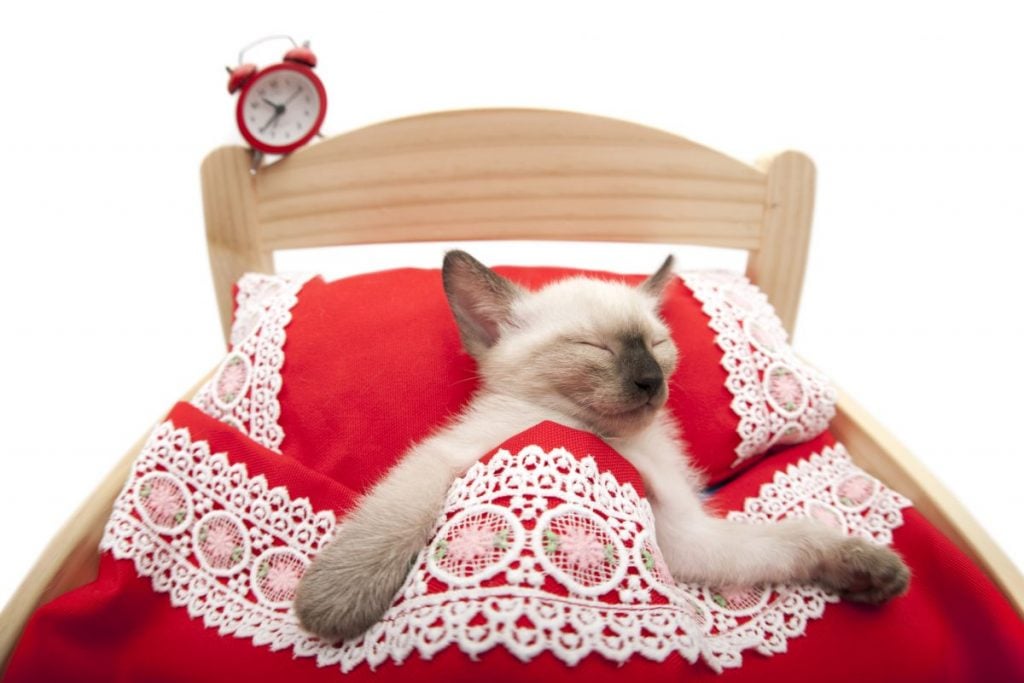 For domestic cats, it is normal to find them curled up on their owner's bed at night time. Both owner and pet enjoy the added warmth and company. However, there are a few considerations to think about before letting a cat get used to sleeping on the bed. Remember that once a habit is in place, it can be hard to change.

Generally, it is not recommended to let young cats sleep in bed with young kids. They will disturb one another, and both also need quality sleep to thrive. 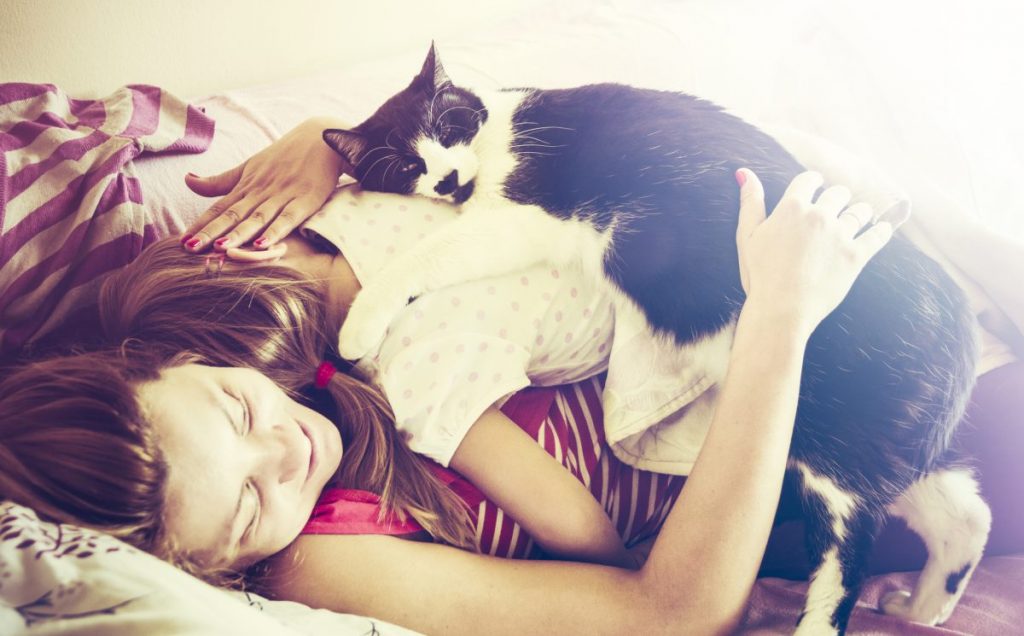